Just like the energy that citizens gave to me when I first walked into its basement, 13 years later in my workshop at that same warehouse, I built this rat rod out of love and respect for a bike that changed my life.

The frame was my first mountain bike ever. An early 90s Kona Explosif that I found mostly stripped in a dumpster on hippie Christmas. Until they started arresting folks for trespassing, hippie Christmas was a special weekend in Tucson every year. That goofy moniker was given to the weekend where the University of Arizona students move out of the dorm for the summer and throw away unfathomable amounts of perfectly good stuff.  From refrigerators to iPods to bicycles and obscene quantities of unopened food, alcohol, and drugs, the surprises used to abound. Even back then as a bicycle newb, I noticed the externally butted Tange prestige/concept/ultra-custom tubing and knew it was something special. I first built this at BICAS in Citizens warehouse. Its first incarnation was rigid, with 1×7 Suntour friction shifting. I rode the tires at 65psi because someone told me they had to be at max psi to not pinch flat. It threw the chain with every bump and I hated mountain biking until I put on a front derailleur to keep the chain from hopping off and lowered the tire pressure. The first of many lessons it taught me.

Riding this bike at first with a rigid fork that was too short and tires pumped up too high, and later with a suspension fork that had too much travel was how I learned to mountain bike. It taught me humility on the trail. I could barely ride it and it forced me to work really hard on my skills. It washed out in every turn and I kept going off in seemingly random situations. This was partly because of the goofy way it was built and partly because I had way more motor than skill.

This bike taught me that you don’t need the newest fanciest bike to shred. You just have to love riding and be persistent. Folks used to look it over and laugh with some secret knowledge that they never shared with me. The classic alienating elitism of the industry. But whatever mistakes I made were all valuable because I learned that some of them were real and affected the function of the machine, and some of them were just others opinionated nonsense that didn’t affect any tangible element of my riding experience. I didn’t have the money for a modern mountain bike and I learned to love my outdated quirky spray-painted pink bike for what we had shared together and not for how valuable or modern or fast it was.  I’m a much better rider and mechanic from all of the time I spent riding and tinkering with this bike and that has more value to me than fitting in.

During those years of experimenting, this special friend lived through many iterations. I eventually broke the frame after ten years of awkwardly shredding together, a highlight of which was a 3rd place team finish at the 24 hours in the Old Pueblo.

Breaking the frame led to building my first “modern” bike packing/mountain bike. A Surly Ogre with a hodgepodge of parts from several eras and 650 B+ tires before they sold bikes like that.

As I enjoyed more modern geometry and bigger wheels and tires the Kona frame sat in my yard for probably five years.

I dreamed about doing a parts bin rat rod build with it, and I finally got the motivation at the beginning of the Covid lockdown when Sofia challenged folks to do parts bin builds. I’m stoked that I finally brought this special bike back to life with some of the uncommon classic goodness that I’ve squirreled away for years. It’s my opinion that bike parts should be used and enjoyed, not packed away and rarely seen as I had done.

The parts on this build are all magical treasures that I’ve loved as pieces of art collected over many years. I have a story for every part but for brevity’s sake, I’ll only share a few. 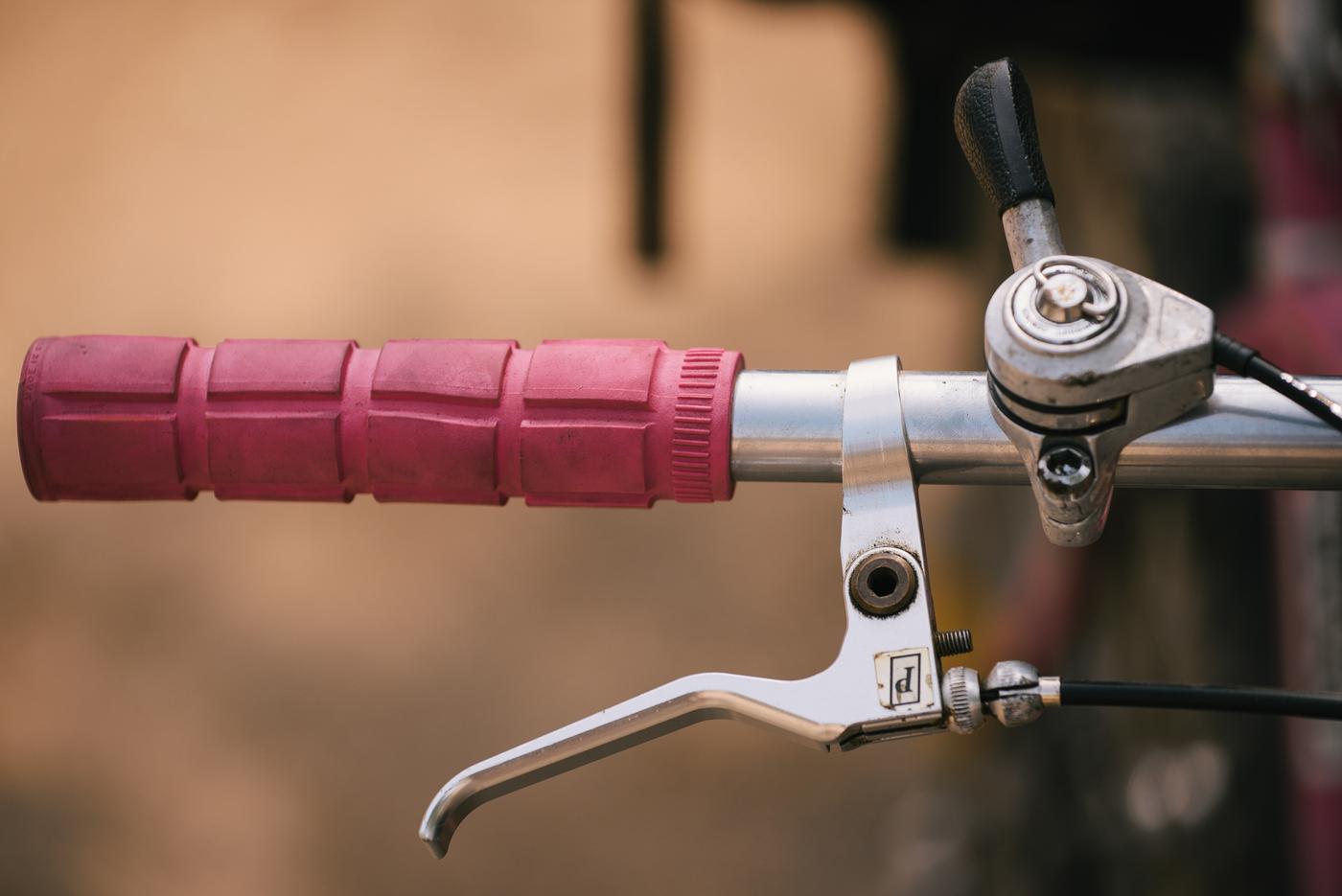 The Paul brakes and levers were acquired for a friend who backed out of the deal and I decided to hang on to them because they’re a beautiful snapshot of the evolution of the best brakes on the market. When I tore my Achilles and built a mad max knee scooter I used those levers for the pure pleasure of it.  I’m a bit of a brake lever nerd.

The Galli cranks were given to me as a thank you for helping someone out. They sat in a bin for probably 8 years. I love them because at that time they were made Galli was making all the Campy Strada cranks, which were my favorite cranks for a long time. The Galli cranks were cheaper and considered less fancy but they actually have a much better finish on them than the campy’s. As a side note, I’ve broken two pairs of those Strada cranks because they had sharp edges where the crank met the spider that leads to cracking. These golden cranks are a perfect example of price and prestige not equating to quality. 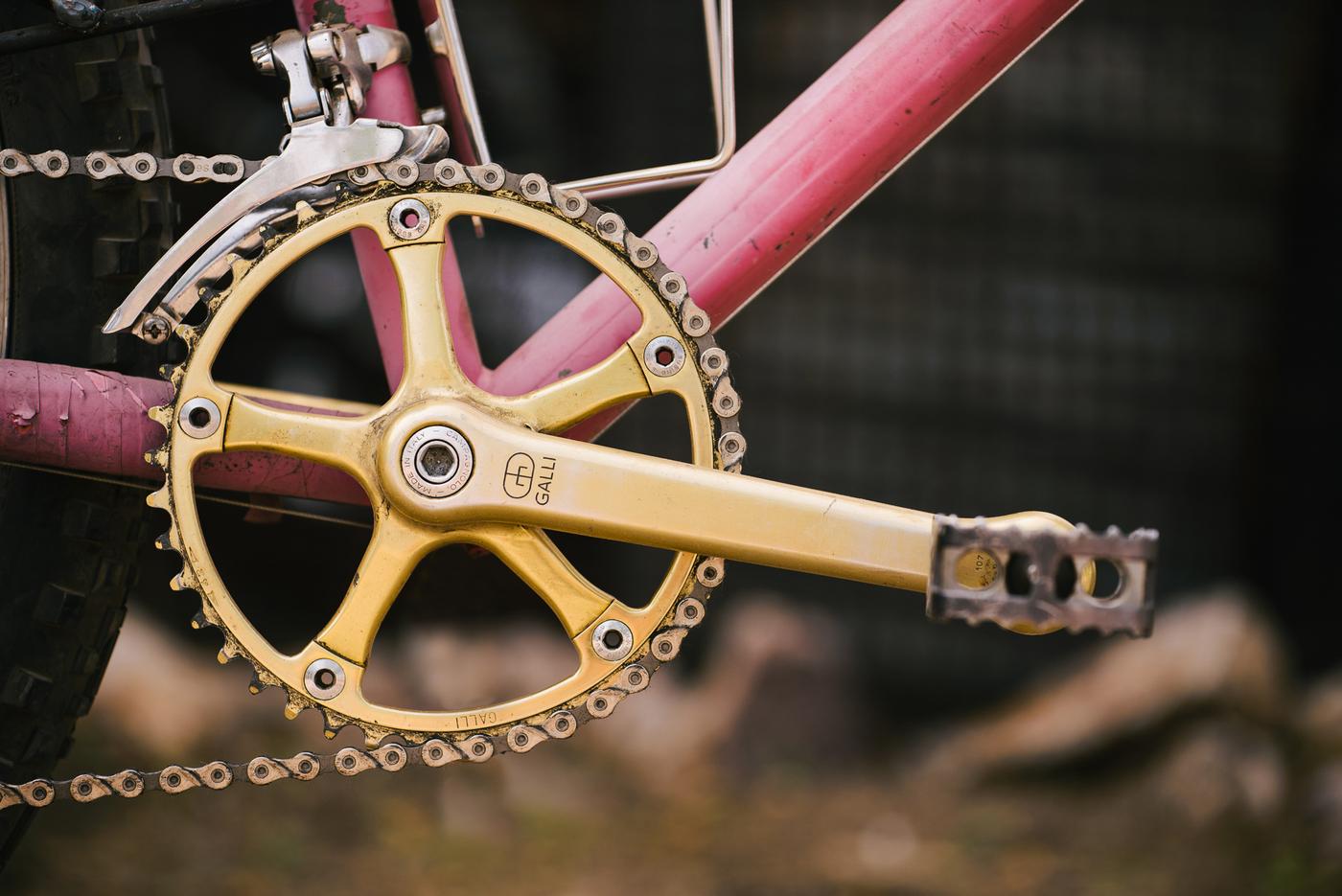 I have a bit of an obsession with old Suntour, especially pedals and derailleurs. So this bike got my oddest Suntour derailleur, I considered a 3 pulley XC but the idea of having to modify the frame to run this Superbe Tech was more exciting. Suntour built their products without fear of deviation and innovation and with absolutely beautiful attention to detail like their logo being etched on every bolt on the pedals. 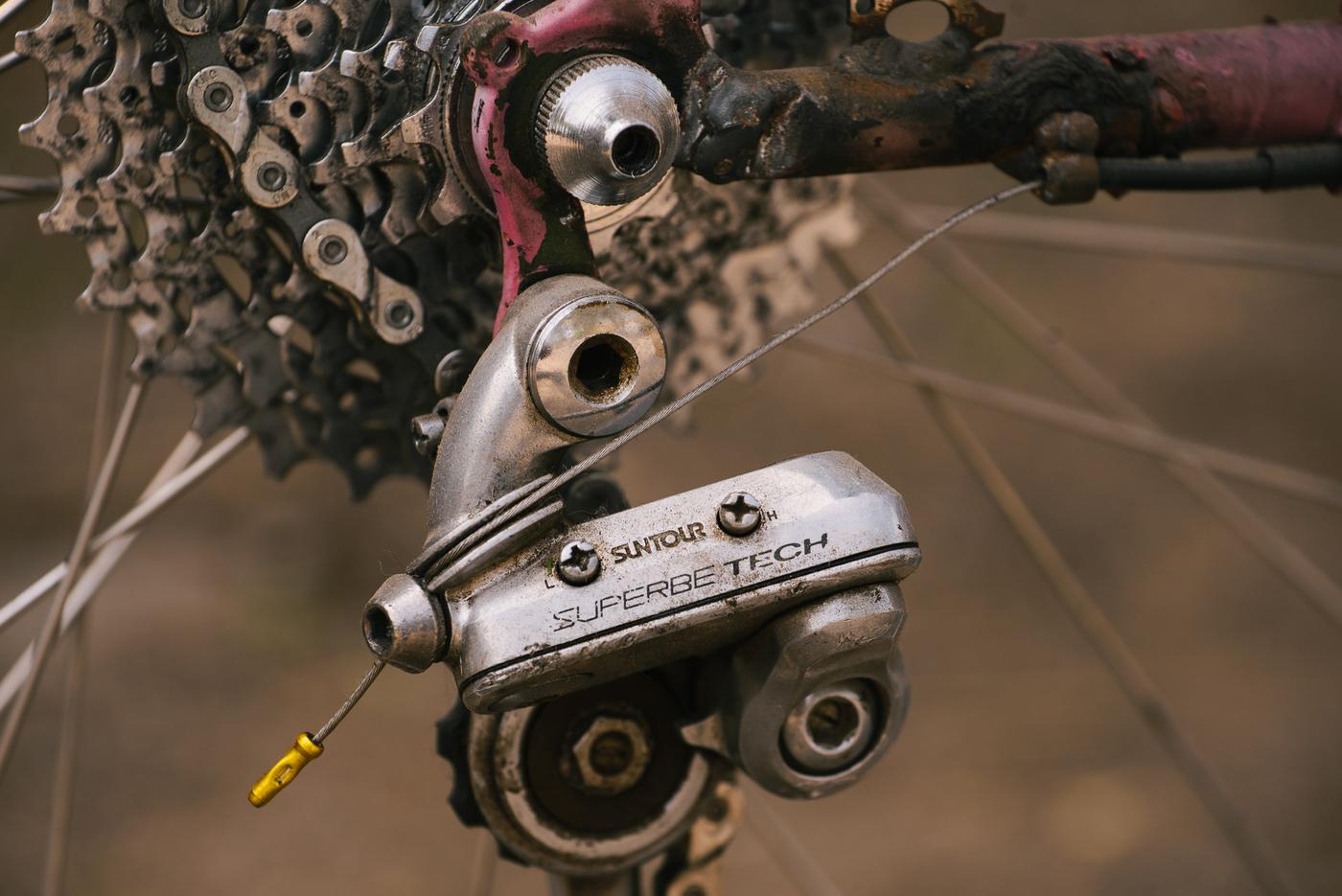 It’s those little differences that get me excited when I look at a bike part.  The attention to detail, a radical attempt at changing the design of an item, and the overall thrill I get from noticing those little, or sometimes big, variations.

As it sits here all decorated and modified, I give thanks to a bike I’ll likely never ride on a trail again.  Instead, I pedal to the grocery store and reminisce. The bike that taught me to love mountain biking is alive again in what is likely its final form. The doors that it opened to bike packing and beautiful long days on the unforgiving trails of the Sonoran desert will always remain open and this project is a thank you to the time we spent together.  May we buy yogurt and kombucha together for years to come.