The constant evolution of mountain bike technology over the past few years has been relentless. Mixed in with the breakneck progression comes fierce competition between the two powerhouses of component manufacturing; SRAM and Shimano. While Shimano was arguably a bit late to the 1x game when compared to SRAM’s early adoption of this technology, over the past few years they’ve proven they’re taking it seriously and have completely revamped one of their most beloved groups, Deore with trickle-down tech normally only found on the higher-priced tiers. I’ve been riding the entire M6100 kit for the past four months here in Santa Fe on my Mystic hardtail and I’m ready to talk about it, so let’s drop right in…

I am not the sort of person to perform tech autopsy on component groups, nor will I weigh components and compare those numbers to listed weights. For me, a product should meet a handful of criteria, of which I’ll break down here the best to my abilities. What I will present to you is an anecdotal review of this component group, as it sits on my beloved Mystic hardtail. 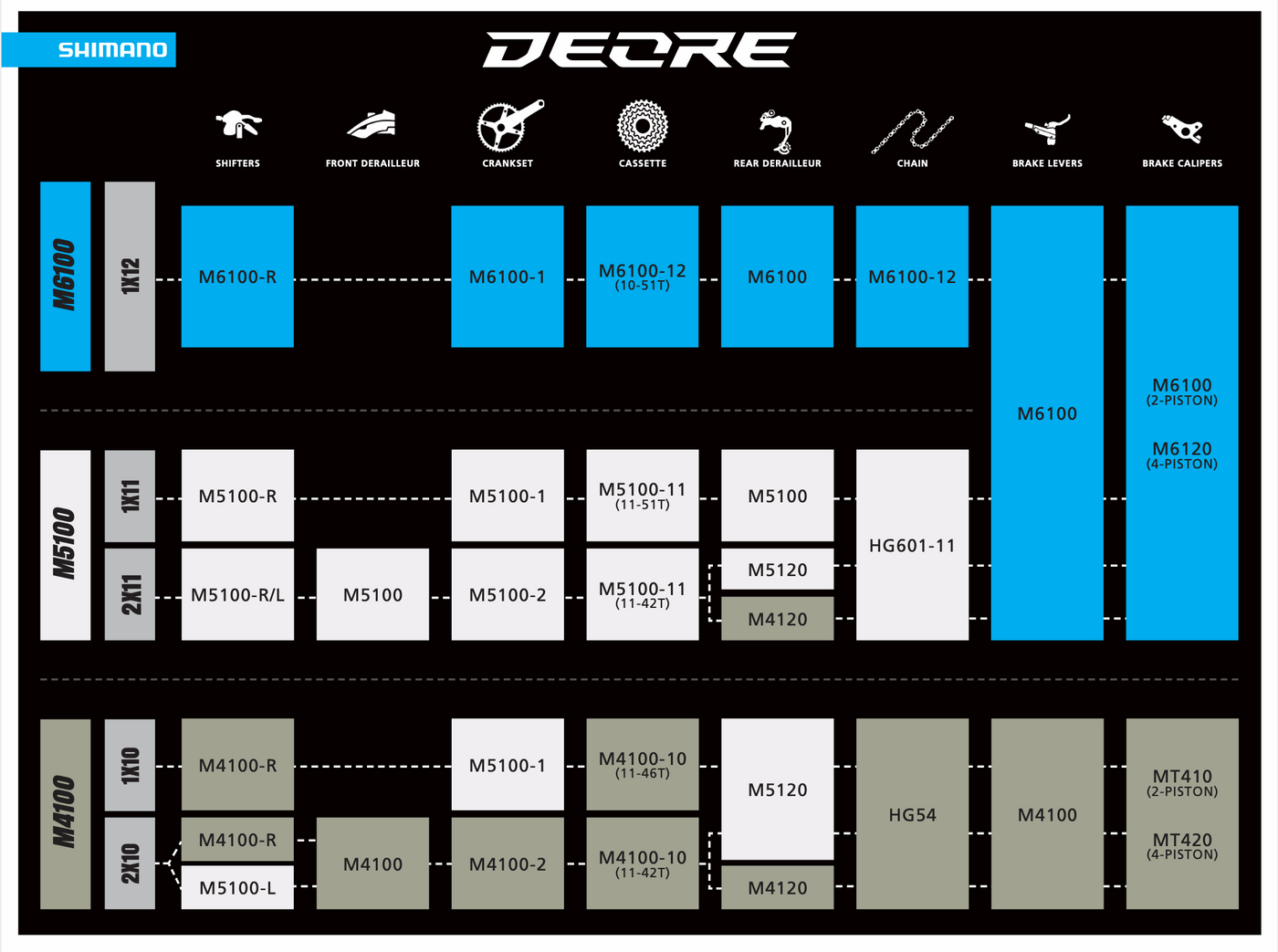 If you’ve been living under a rock for the past few years, you might be surprised by me calling Deore a lower-tier kit and that’s because in the current Shimano catalog the procession of components is as follows: XTR, XT Deore, SLX, Deore, etc, etc, etc. Deore used to be the group you bought because it didn’t make sense to splurge on XTR. Now it’s fourth down in the hierarchy of Shimano’s MTB componentry. 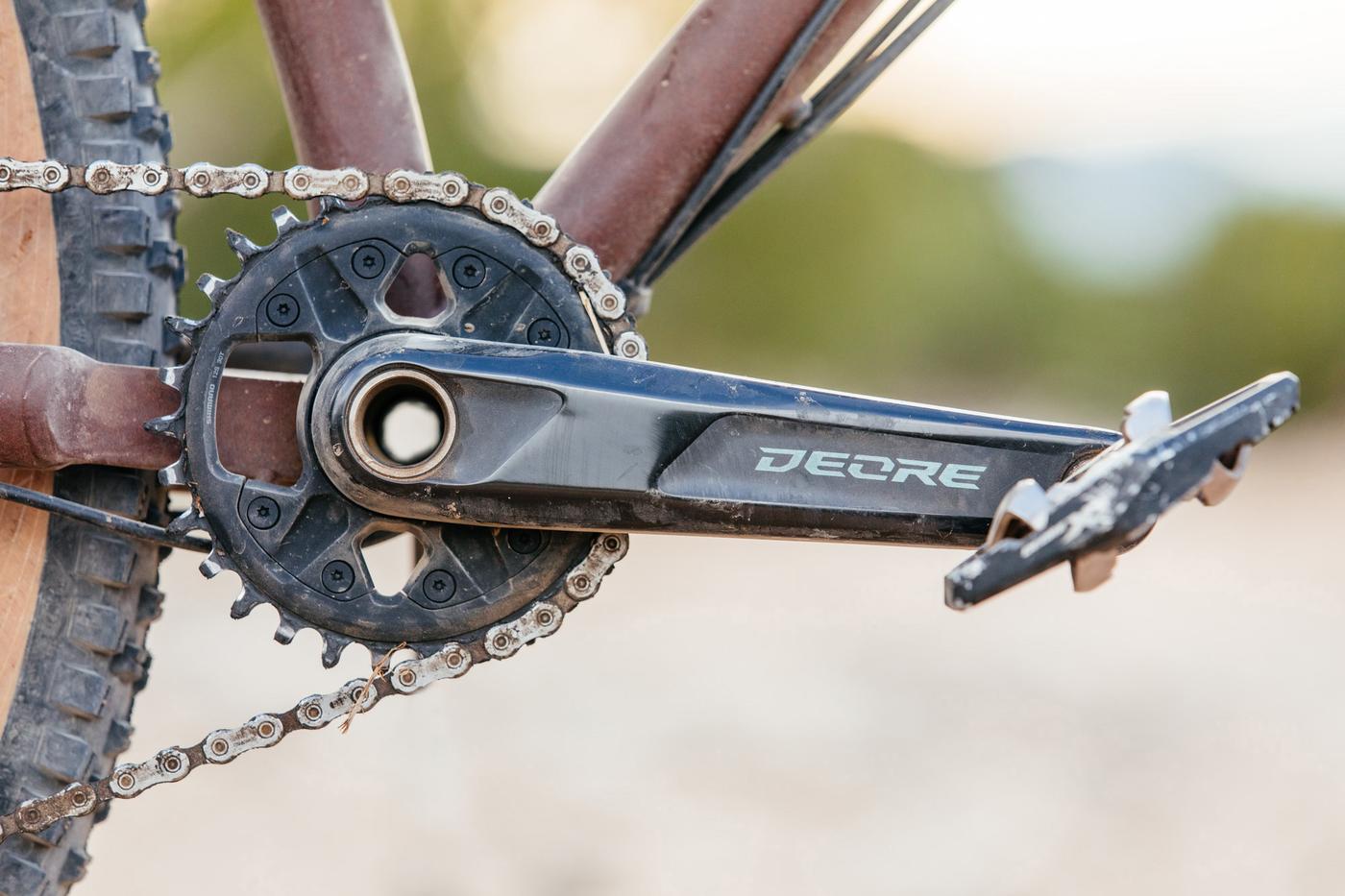 Personally, the $297.95 pricepoint is the sweet spot and we’ll go over my reason for that in a bit. 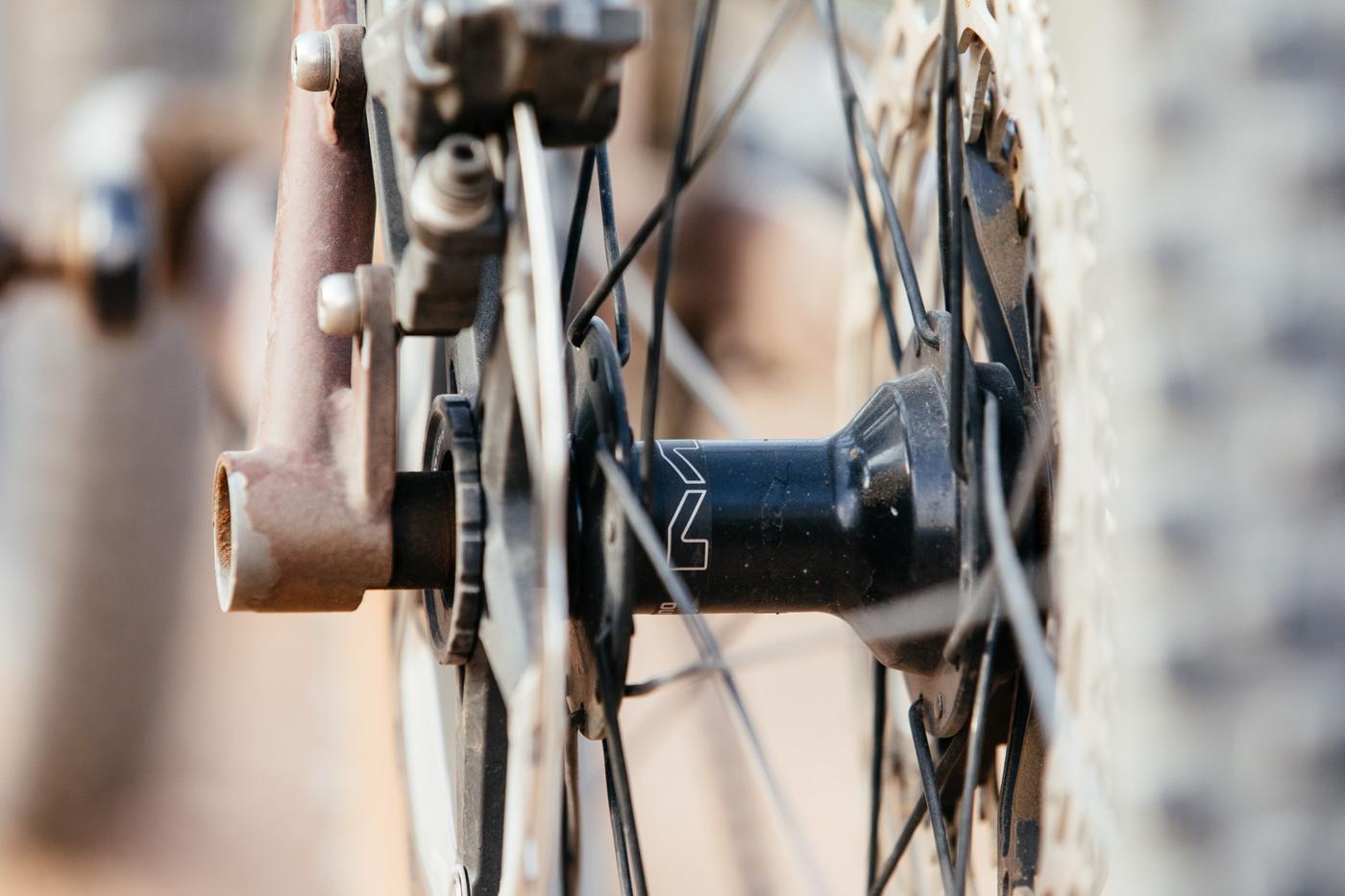 The mechanics of Deore M6100 remain the same as all Shimano MTB kits. The trigger shifter offers a familiar feel, without feeling cheap, and the derailleur shifts reliably up climbs and charging down descents. Where the one hiccup lies with 12-speed is the Micro Spline freehub. If your current wheels aren’t compatible, that means you need either a new build or a new rear wheel. Yet, if your new bike comes specced with M6100, you need not worry. 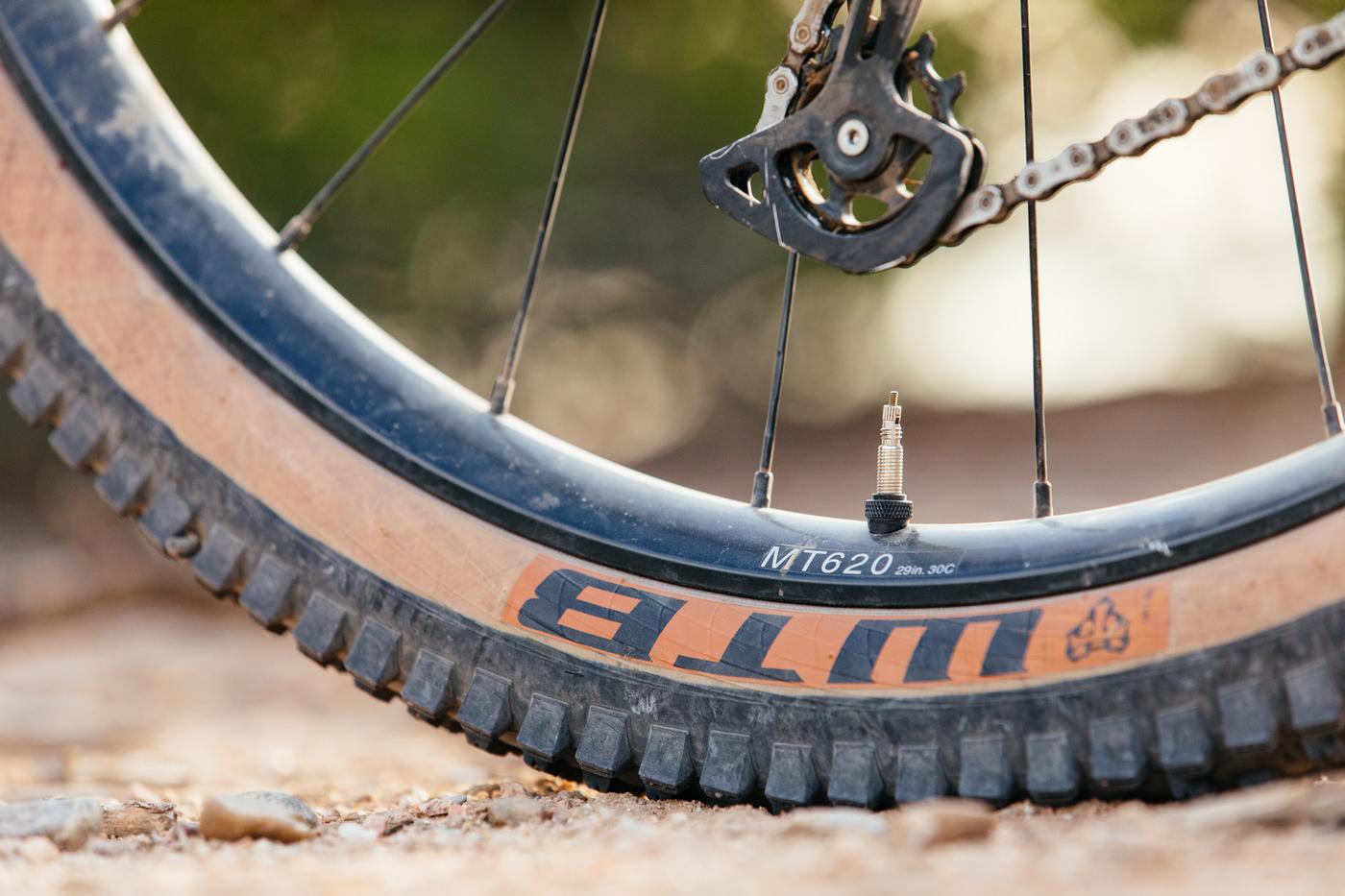 In this review groupset, I also got to ride the 29er wheels, so I didn’t have to fuss with swapping out any drivers. Again, this isn’t a deal breaker but juggling all these driver standards can be a real headache, especially if you’re on a budget. M6100 also only comes as a 1x kit, so if you want a 2x 12-speed kit, you’ll have to look up a notch to SLX. 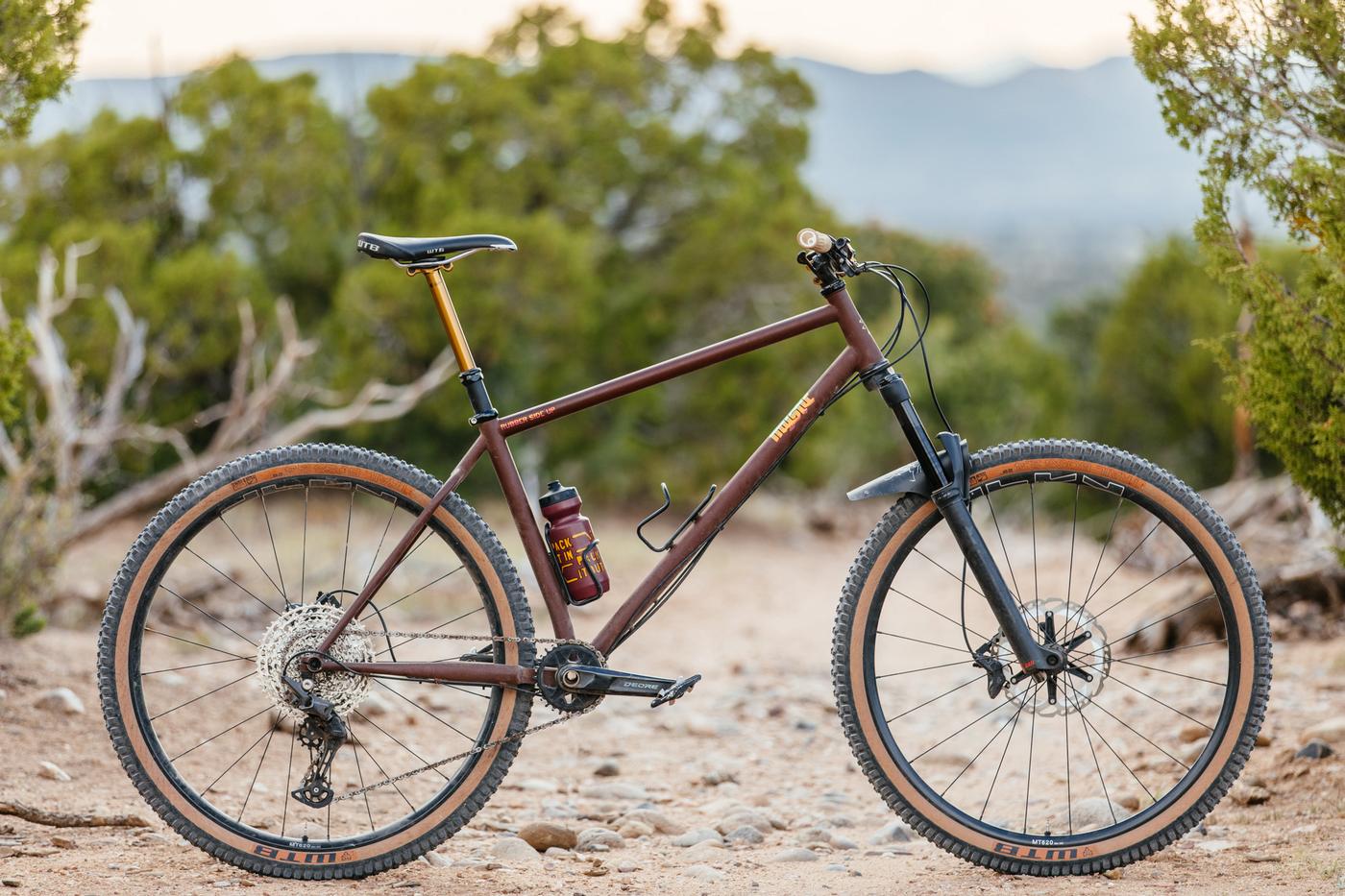 For some people, looks ain’t everything but they do matter. An ugly kit can really ruin the total appearance of a build. Sure, how a group performs is ultimately most important but we can’t skip over one of the first things I look for in a mountain bike group. There are vintage purists that balk at the idea that anything modern will ever have the panache as its predecessor, yet the Deore M6100 group ain’t exactly ugly. It’s sleek, minimal, and really just disappears on this frame. 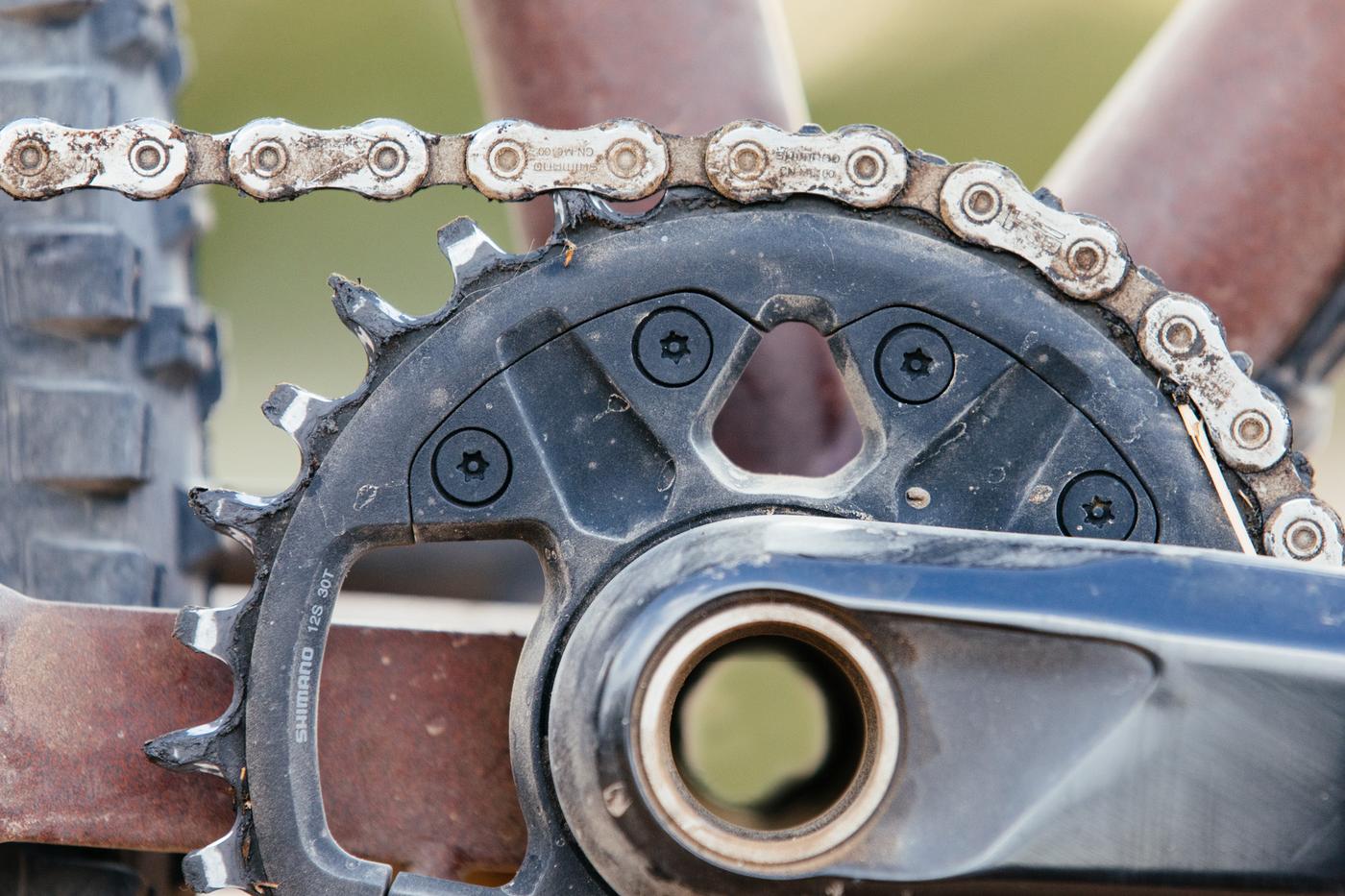 The only qualm I have are the cranks. Mainly the weird integrated spider and chainring, which are united by torx bolts. Now, you’d think this is so you can swap chainrings but they aren’t meant to be unbolted. Rather you have to swap the whole spider+ring assembly and your options are limited there to either a 30t or 32t ring within the Deore catalog. Personally, I would have eliminated all this and just made a direct-mount chainring but that’s me. Sure, there are other options within Shimano’s catalog since their 12-speed cranks use the same interface or third party manufacturers like Wolf Tooth, AARN, Absolute Black, etc. 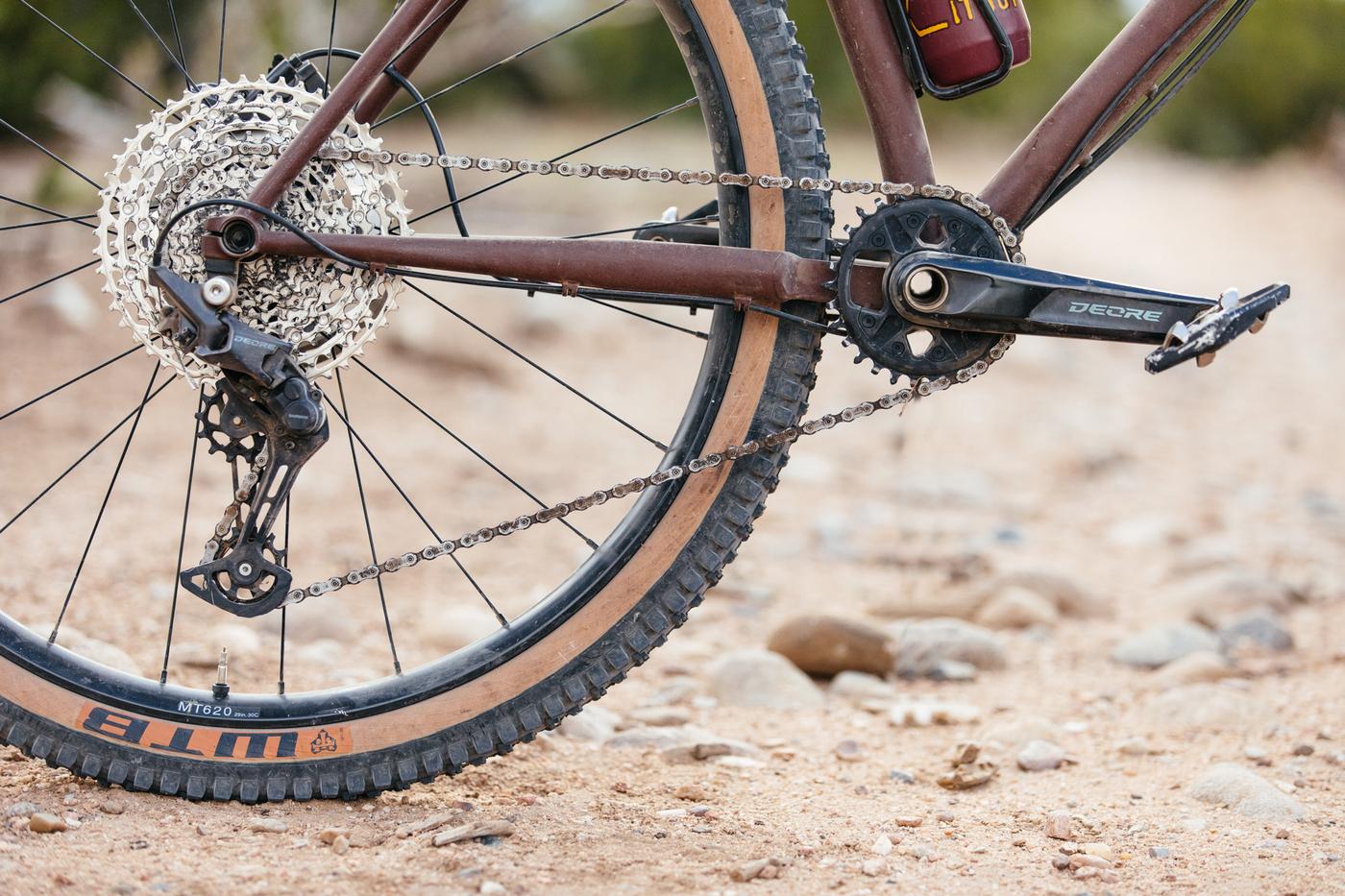 The other day, I was finishing up a ride with a few friends and as we were pedaling through town, the rear derailleur began to trim between the two cogs on the cassette. A friend reached over and rotated the barrel adjuster on the shifter just a tad, ending the clatter. He was doing both of us a favor! That’s the extent of the maintenance I’ve had to do to this group in the four-month review period. Aside from lubing the chain, the experience has been very uneventful. What I really like about Shimano’s drivetrains is how well they shift, even under load. Deore is no exception. Even a few notches down from XTR, you can still expect the same, clean shifting experiences while riding. Having a massive, 10-51t cassete under Shimano’s shifting platform is a real treat as well, especially coming from someone who has ridden 10-50t Eagle groups religiously over the past few years. 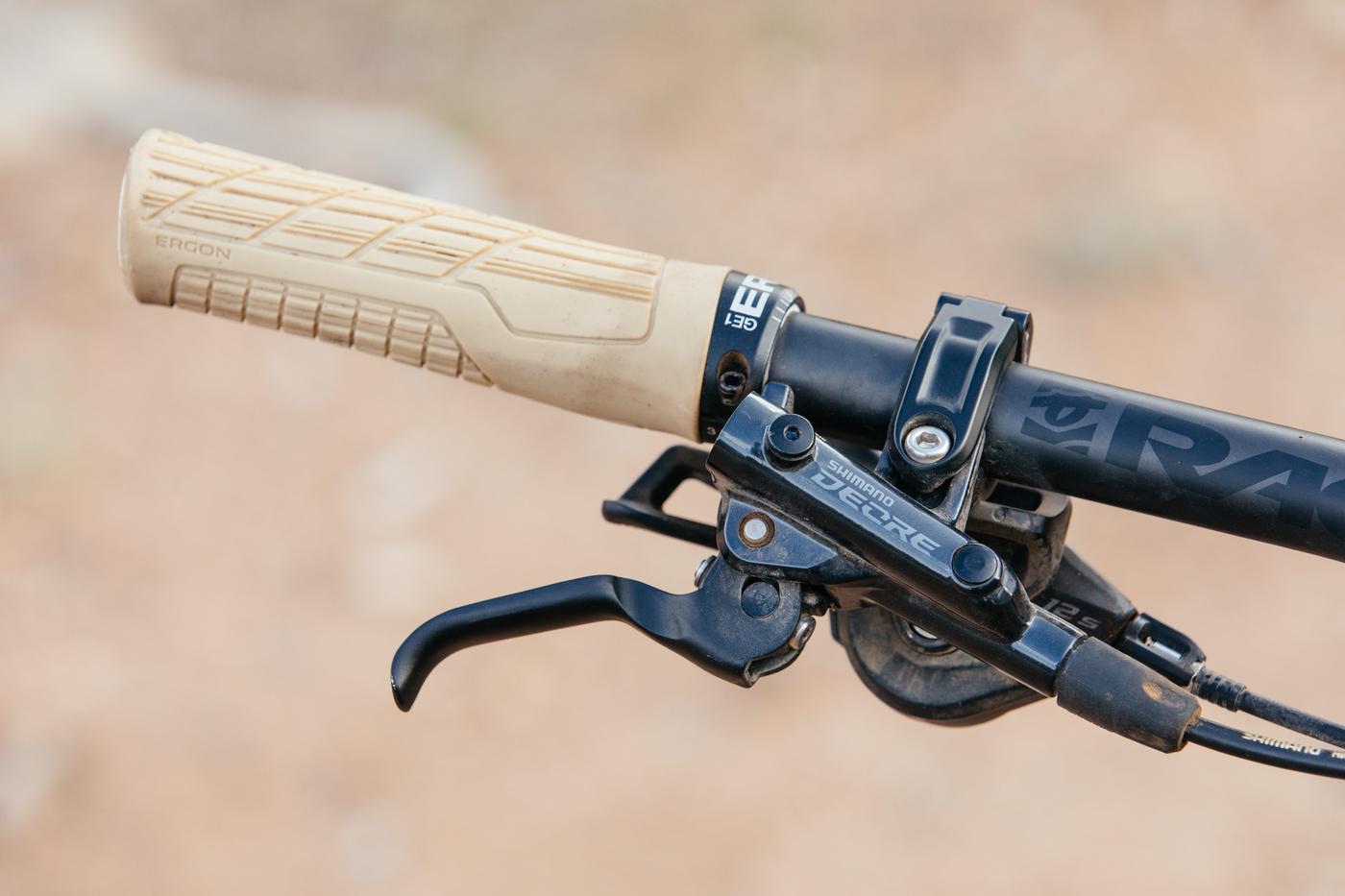 Where one might want to spend a little bit more money is on upgrading to a higher tier brakeset, especially if you live in a very mountainous area. I did experience brake fade while descending my go-to after-work loop on the 4-piston brake a few times and they left a lot to be desired, especially coming from my Hope 4-piston setup. Yet, some might say that particular loop is more Enduro/DH anyway, so upgrading to a more robust brake would be ideal anyway. Touché. 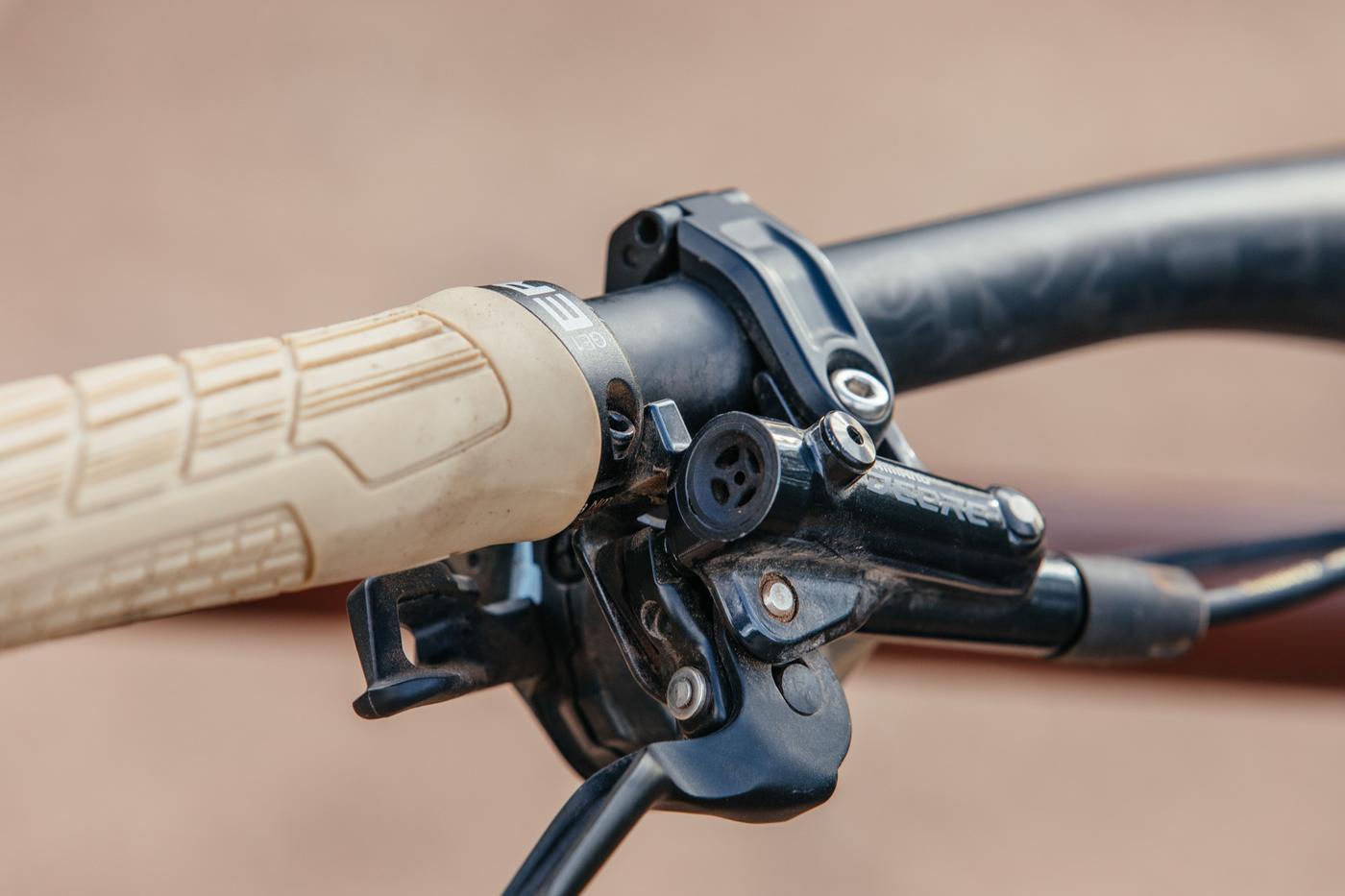 This critique is a bit of a bummer because my favorite feature of the Deore brake levers are these little stopper arms that allow you to slam the whole mechanism against your grips, making spacing a no-brainer. I’m always fussing with spacing and lever positioning and this really stood out to me as an exceptional user-experience design. 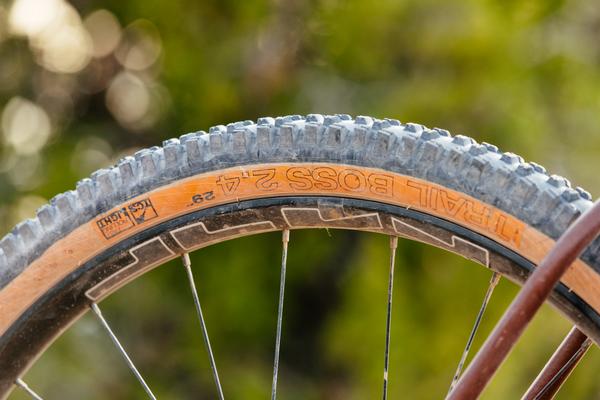 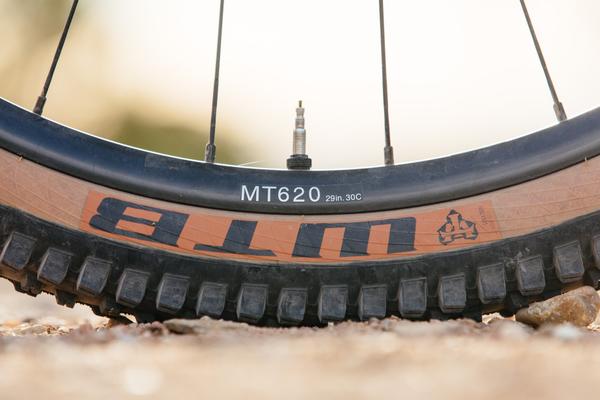 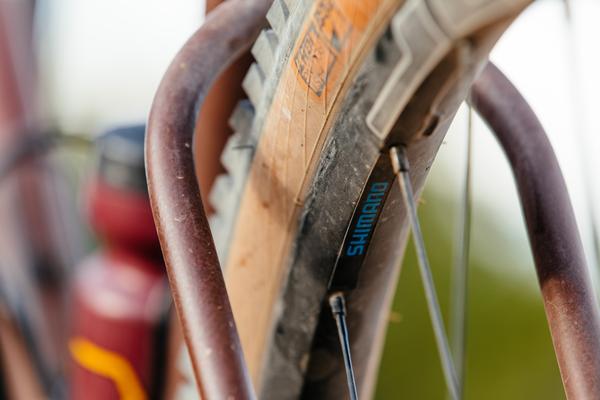 I never thought I’d say this but damn, these 24 spoke, 30mm-wide, aluminum Deore wheels are really great! After riding a variety of wheels over the years, I had given up almost entirely on aluminum rims. My 200-pound ass and a hardtail on rocky trails usually ends with me banging out dents and plopping in a tube to pedal home. I really wanted to see what these wheels had to offer so I ran some light casing tires, no Cushcore, and went to town.

While I didn’t case anything big, I hardly went easy on these wheels, jibbing rock lines, smashing through chunderous descents, and taking plenty of dumb lines. The wheels are still true and aside from a few Dynaplug inserts, the Mystic is still rolling. Could it be some sort of black magic or are these wheels really worth their weight in gold ($245)? 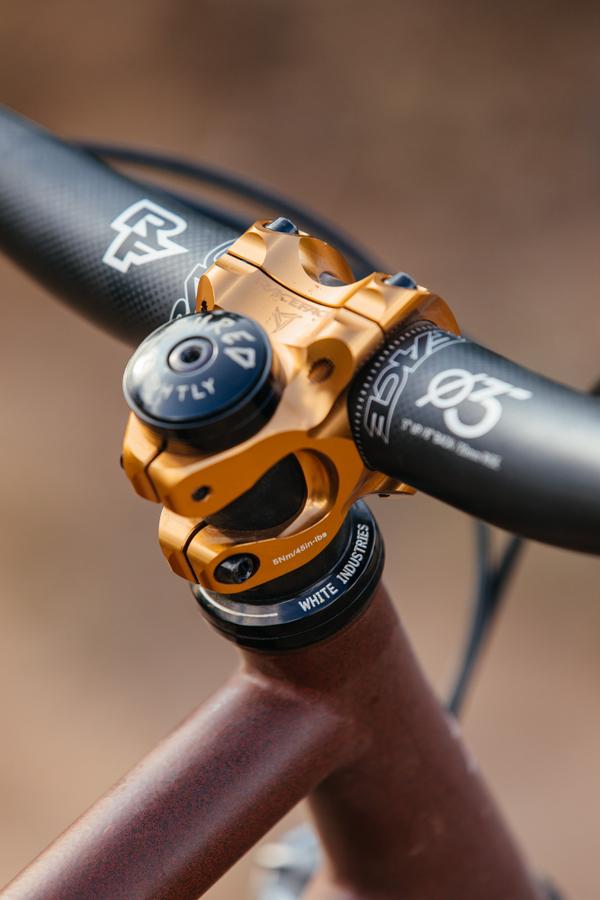 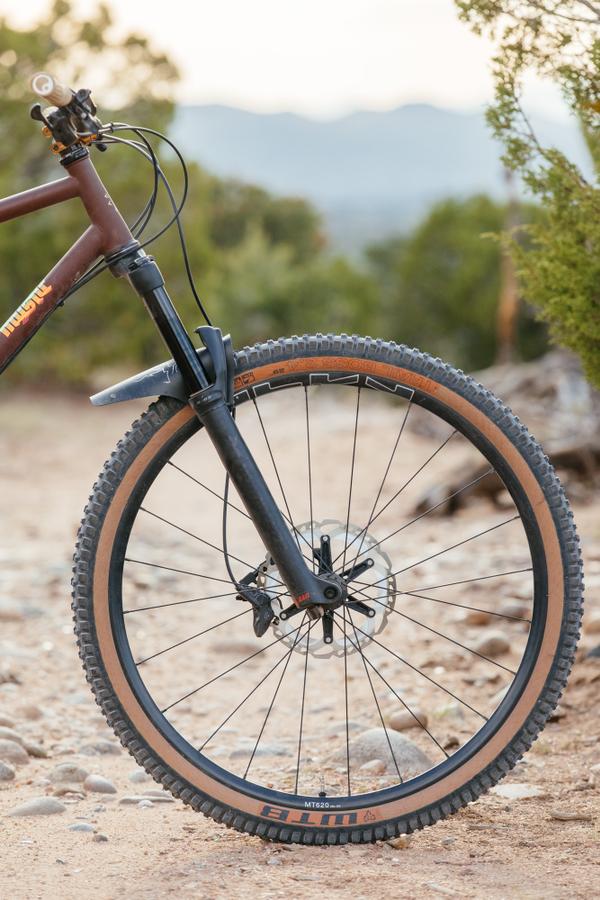 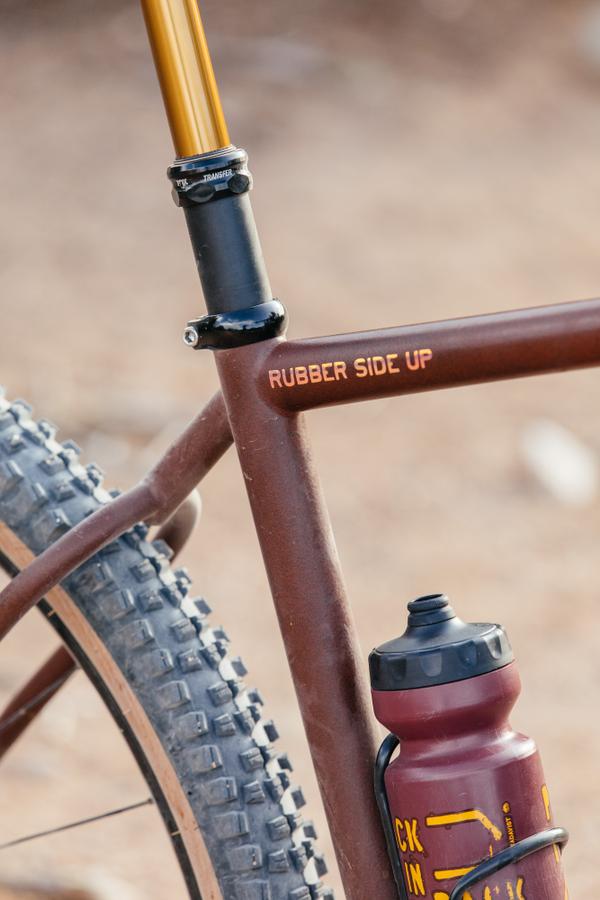 This bike looks so damn good and a lot of that has to do with the now-lighter, easier to maintain Fox Transfer Kashima dropper, the Race Face Turbine R 35 cockpit, and that sleek, minimal Marzocchi Bomber Z2 150mm fork. Real quick as to not take away the thunder for the Deore review, I’ll say that for a $500 fork, I couldn’t and wouldn’t want anything else on this bike. It’s not a secret that Fox bought Marzocchi and began producing their forks. This Z2 is around the same performance as a Float 32 with two rake options, 44mm and 51mm, and beautiful Ø34mm all-black stanchions. With rail damping, a float spring, and an easy-to-tune performance, the Z2 might be your best bang for your buck. 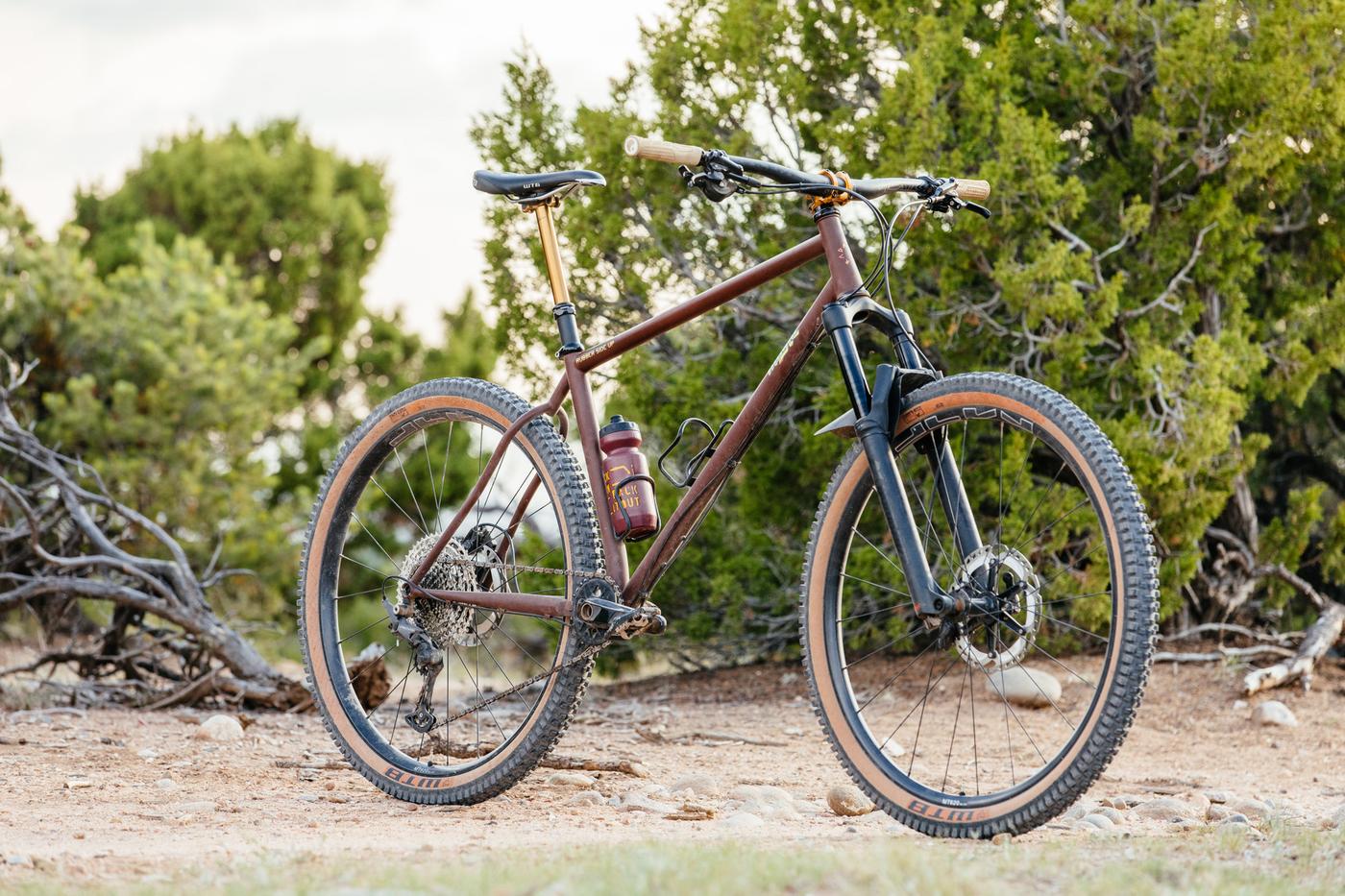 Well, I’m not sure if you loved or hated this look at 12-speed Deore but one thing’s for sure, I have other kits I could put back on this bike but for now, I don’t want to take the Deore off of my Mystic. That’s coming from someone who has been religiously riding SRAM 12-speed. I really like the feel, the looks, and the performance of the new M6100. Aside from maybe an upgraded set of brakes, a Cushcore on the rear wheel, some beefier tires, I’d say this bike is “dialed”.

Deore was one of my first MTB groups I ever rode and I have a soft spot for it both in its vintage and modern configurations. MTB kits shouldn’t be expensive and this push towards tech progression has proven that if you’re patient enough, the upper-tier tech will roll downhill…

Check out more information at Shimano and if you have any questions on this kit, drop them in the comments!