Ride Along with Chelsea Weidinger

Cross Was Here: A Day in the life of Chelsea Weidinger
Photos and words by Jen Abercrombie

It’s January and everyone is thinking of resolutions and goals for the coming year. As cross season ended, I spent a day in San Francisco riding and talking with Chelsea Weidinger, of the MASH Cyclocross team, about how she got here and where she’s going. Chelsea hails from Columbus, Ohio. After stints working in a bank and a juice bar, she decided that coffee and bike racing were more her speed, and moved to San Francisco in 2012. She says “I was living in Columbus, and I didn’t hate it, but it just got too small for me. I decided I was just over it. San Francisco seemed to have better weather for riding all year round, a better bike community and more opportunities for racing. In Columbus I raced alleycats and stuff but I wasn’t even riding a fixed gear bike. It was singlespeed. I’d seen the MASH movie and that actually is part of what made me want to come here.”

Regarding her career in coffee she says “I didn’t know anyone when I moved here. I started from scratch with everything. I worked at a café in the financial district. Just a mom-and-pop shop. I knew it wasn’t going to teach me anything about third wave coffee, but I figured I needed to work somewhere first. Then once I was there for a year, I knew Marc Marino, because he worked at the Mill, and Emily Haddad because she worked at Four Barrel. Because they knew me, I got hired. I’ve been a barista at the Mill for two years.” Like Chelsea, a lot of people were inspired by the first MASH movie that came out in 2007, featuring fixed-gear riders in San Francisco. “I’d already set the goal in my head that I was going to be the first girl on MASH. I don’t know how it’s going to happen, but it’s going to happen. I knew that I would have to prove myself as someone who could ride a bike fast, and be part of the family basically. I did two of their alleycats, and was the only female. I finished them both and the second one I came in top 10, even out of all the guys. At that point I sent them an email and said ‘I want to race cross this year, it’s my first year. Do you want a girl on the cyclocross team?’ So for the first year they were just trying me out. I wasn’t officially on the team. They gave me a skinsuit, that was it. That was the 2013 season. “
In 2015, MASH released a new movie that features Chelsea riding a track bike on the dirt in Golden Gate Park. The accompanying book has a full-page photo of her racing the Bay Area Super Prestige at Coyote Point.

Unlike a lot of people, who spectate for a few races before pinning on a number, Chelsea had never seen a cross race in real life until she showed up in her skinsuit. In that very first race, she was in 5th place in the B field coming down the finishing straightaway, when another racer cut over and took out her front wheel, crashing her out. She ran across the finish line and still finished in 12th place. So, if you’ve only ever seen a cross race on the internet, how do get good enough at it to narrowly miss a spot on the podium in your first race? “I got my bike and I rode dirt in Golden Gate Park. (teammate) Derek Yarra took me out and taught me mounting and dismounting. I just knew that I would be good at it and that I would love it. I didn’t have any official training. I was just doing whatever I thought would be good, which is crazy because now that I have a coach I look back on it and I had no idea. My first season was really good. I was racing in the B’s and the second half of my season I was on the podium almost every race that I did. I finished out my season with the goal that I wanted to get first in a race. I traveled to a Sacramento race. I said ‘I’m driving by myself to this race because I want to win.’, and I did”

After that first successful season, Chelsea stepped up her training and began working with coach Ellen Sherrill of team Rock Lobster. “In 2014, I knew if I wanted to be faster I needed a coach. I set goals. I started my 2014 year with the goal of going to a Cat2. In October, after CXLA I got my Cat2 upgrade. It was my second year of racing. I made a plan: Every race that was USAC sanctioned I raced 3/4s because I wanted the points. I put them all on my calendar. But every race that was not USAC Sanctioned, I would race in the Elite field, to get the experience.” In one calendar year, she’d gone for a Cat4 to a Cat2. “I guess a lot of people get coaches and it doesn’t work out, but with her it’s awesome.” she says of Sherrill. She laughs “She holds my hand if I need it.”

Reflecting on her 2015 season as it ends, she says “It’s easy to get caught up in not being on the podium and feeling bummed about your results, but I always try to set realistic goals for myself. If I really break it down and look at it that way, for my third year, I feel pretty awesome about it. I never thought I’d be on the podium this year. That was never a goal, but then I was on four podiums maybe.” She’s already setting goals for next season, like being 2 minutes faster in her races. 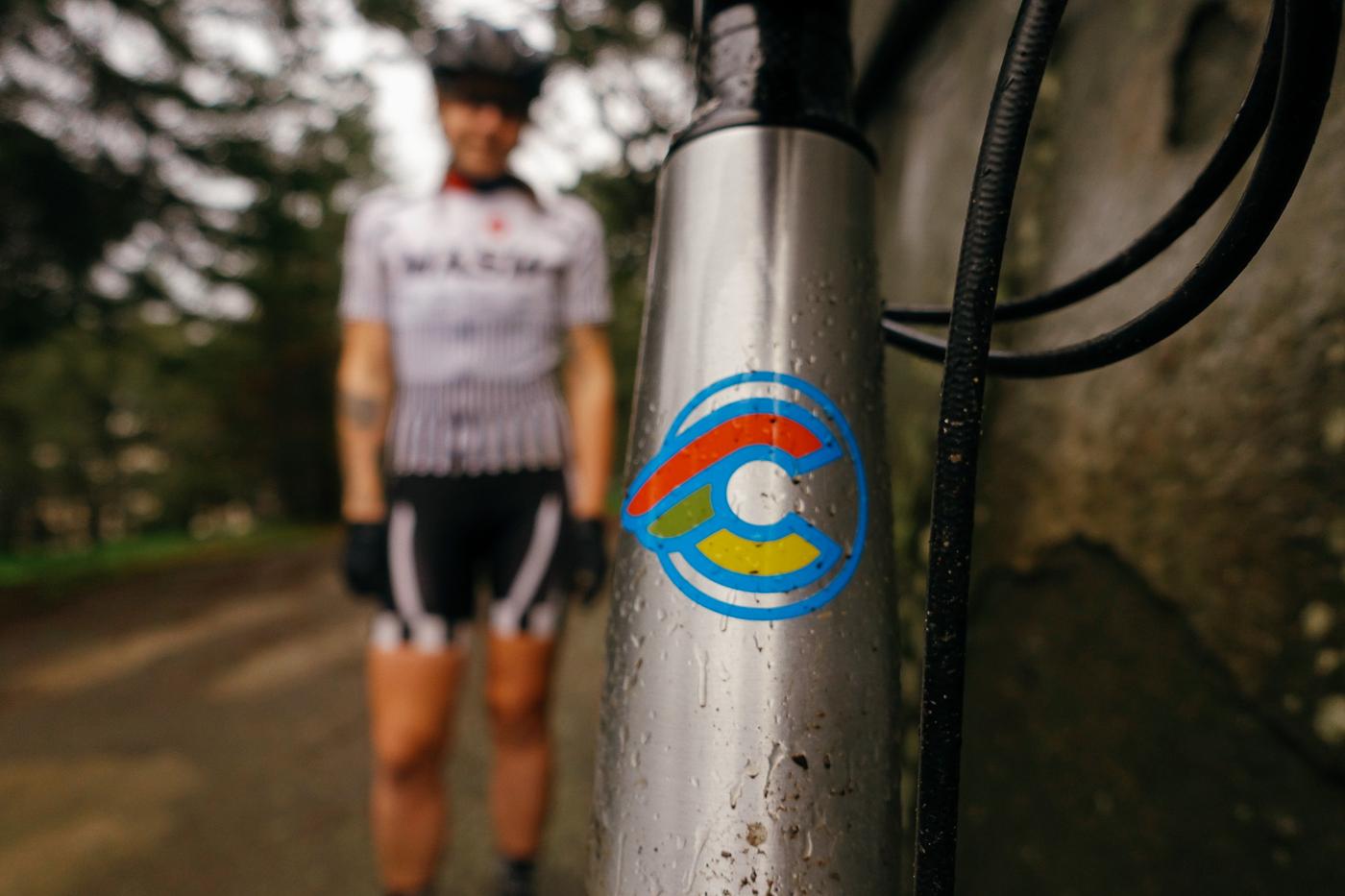 Now that the cross season is over, Chelsea is taking some time off from training with her coach. “I like riding dirt. I will probably put my cross bike away until the summer and ride my mountain bike to gain better bike handling skills. Road is fun and you see beautiful stuff but road racing isn’t appealing to me. Mountain bike racing would be cool, but if I race anything outside of cross but I think I’d get burnt out on a full cross season sooner. “ Waiting for her appointment with Hannah Wednesday at Tuesday Tattoo to begin, we sit on a bench in front of the famous Trouble Coffee, eating toast and gazing down the hill towards the Pacific Ocean as the rain clears. The Outer Sunset is located on the western edge of the San Francisco. Chelsea says “I definitely see myself moving somewhere else eventually. I get in ruts and I want to move other places. It’s expensive here. It’s easy and hard to get around at the same time. It’s hard to get out of San Francisco you don’t own a car. And there are a lot of people. I love my neighborhood though. I wouldn’t live here if I didn’t live in the Outer Sunset. It’s quiet. There are fewer people. It’s an actual neighborhood. If I walk from my house to the grocery store, and then to Trouble Coffee, I see a million people that I know, and I’ve been here three years. I’m right by golden gate park so if I want to ride dirt it’s right there. There’s great dirt riding in Marin, but if I want something that feels like a cross race and trails to practice on, Golden Gate Park is right there. The ocean is right there too. I would take up surfing if all my money and time didn’t go to cyclocross. “