The peaks of Wyoming’s Gros Ventre Range might not be quite as photogenic as the towering, craggy summits of the nearby Tetons, but snaking through the Gros Ventres just west of the Continental Divide is something the Tetons lack – a substantial network of mostly-groomed winter trails. I didn’t know much about the trails, but looking at topo maps of the area, it looked impressively rugged terrain, much more so than other places where I’ve done longer rides on a fat bike. Last January, I was in the nearby Teton Valley, and looking for a change of scenery and trails, Kait Boyle and I decided to venture over to the Gros Ventres for a few days to see just what the winter riding was like. 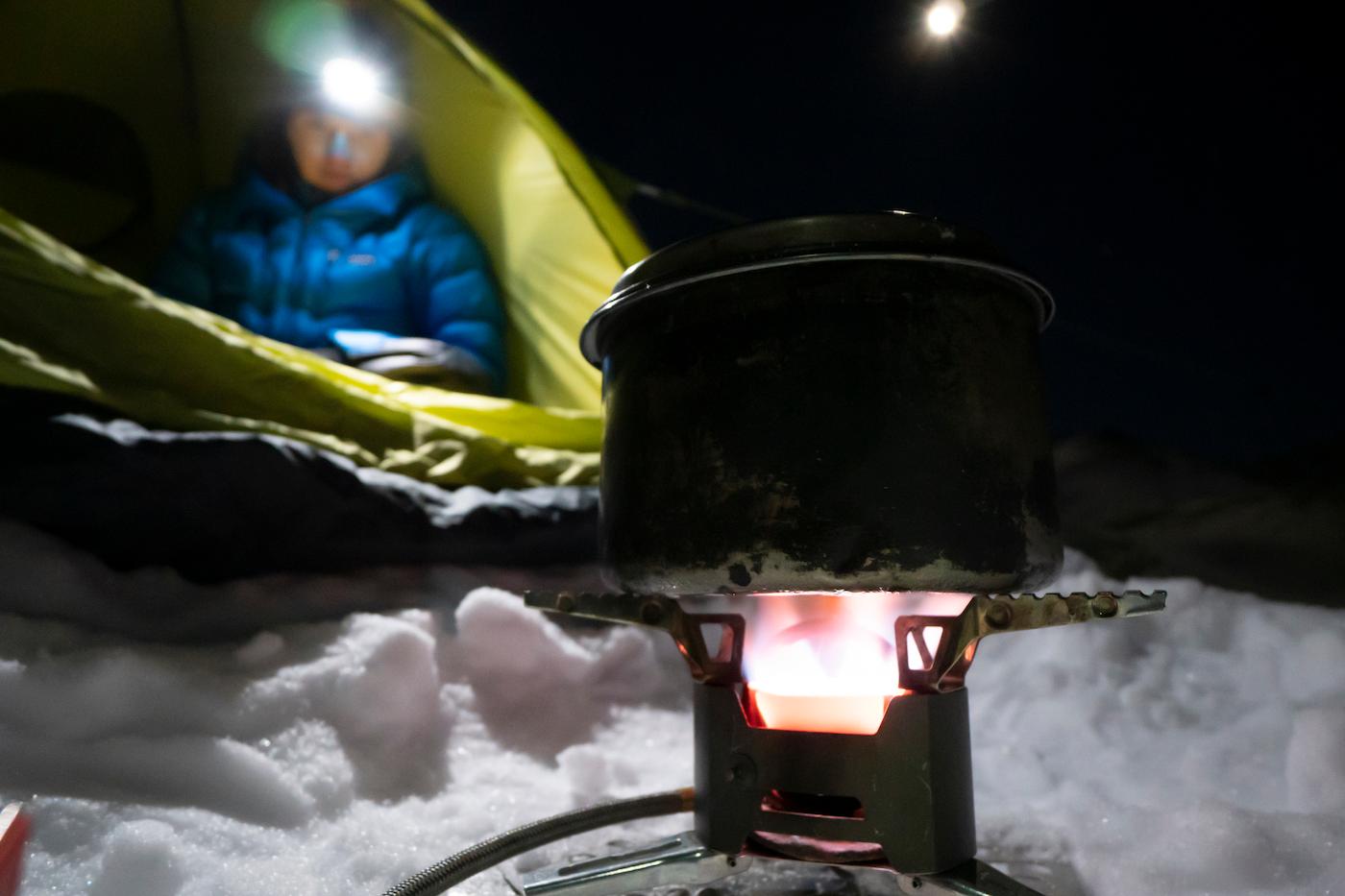 Kait switched off the stove after a half an hour of melting snow for dinner and breakfast, and the gentle roar of the burner was immediately replaced by absolute silence. It’s a rare thing when there’s not a single sound to be heard beyond one’s own rhythmic heartbeat and breathing. Instinctively, I held my breath and tried to absorb the silence. Eventually, I shifted positions slightly as my butt got cold, and the little bench upon which I sat creaked as the snow compressed beneath me. The lack of any other audible noises whatsoever was captivating. The last of dusk’s rosy glow had already faded over the low ridge on the other side of the drainage, and just a couple weeks after the winter solstice, a long, cold night was just settling in. But hungry for dinner, Kait clanked the pot as she started dumping ingredients for curry into the hot water. 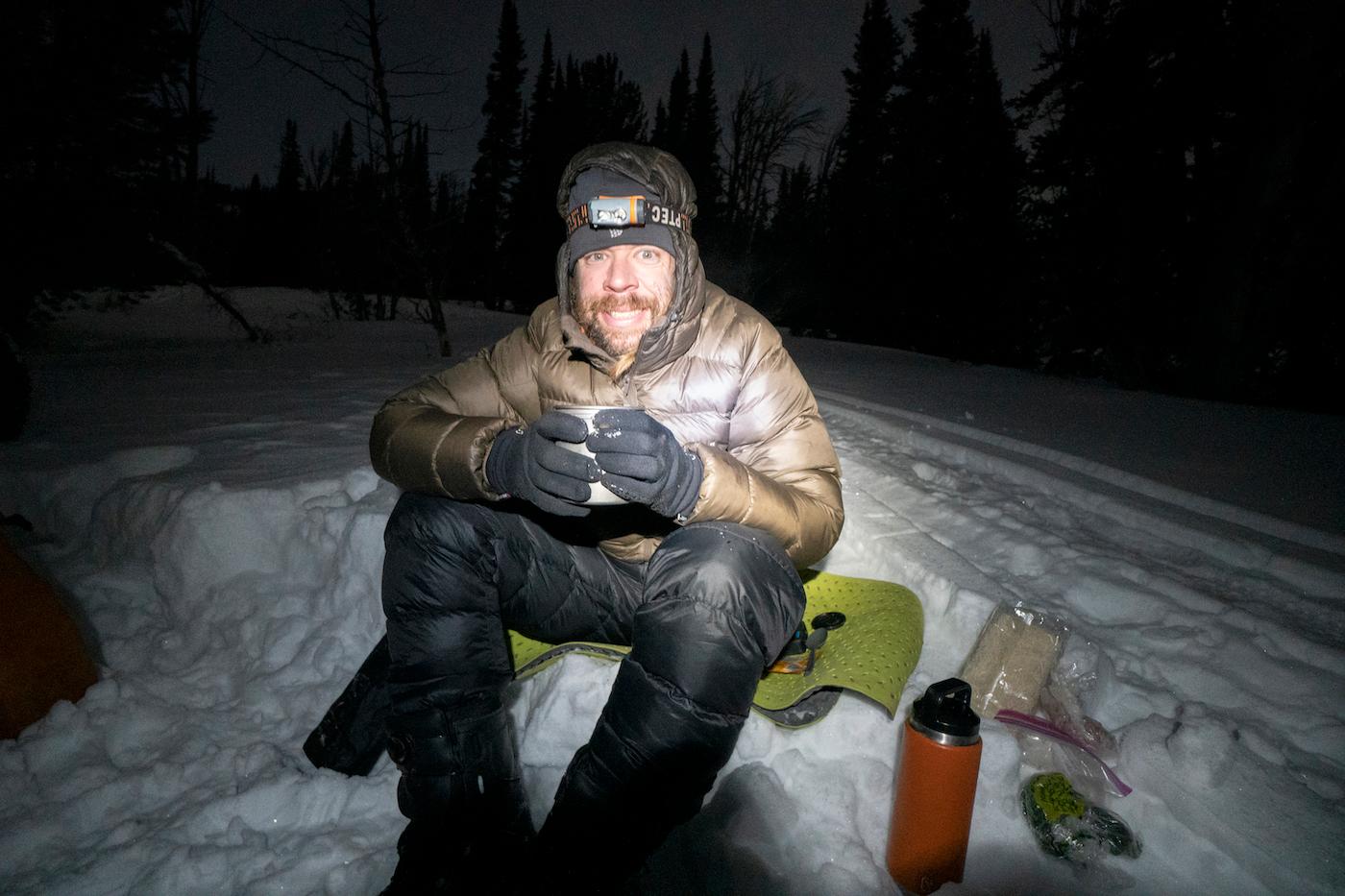 A bit later, a bright light flashed across the wall of trees on the opposite side of the meadow and then bounced slowly as it illuminated patches of the rolling terrain. The low, steady growl of a diesel engine grew louder, and the light grew more intense.

“A groomer!” Kait grinned as she turned around and looked out toward the trail behind her. Moments later, two rows of blinding headlights came into view around the bend amid a cloud of snow being churned up by the big orange machine. The snowcat and its long grooming drag passed by our camp spot at impressive speed and was rapidly enveloped by the darkness beyond.

“We’re going to have great riding in the morning!” I could almost feel my tires rolling effortlessly over hardpack snow set up over the course of a chilly night. Both Kait and I were smiling at the prospect of some easier miles after rather demanding riding conditions the prior two days. 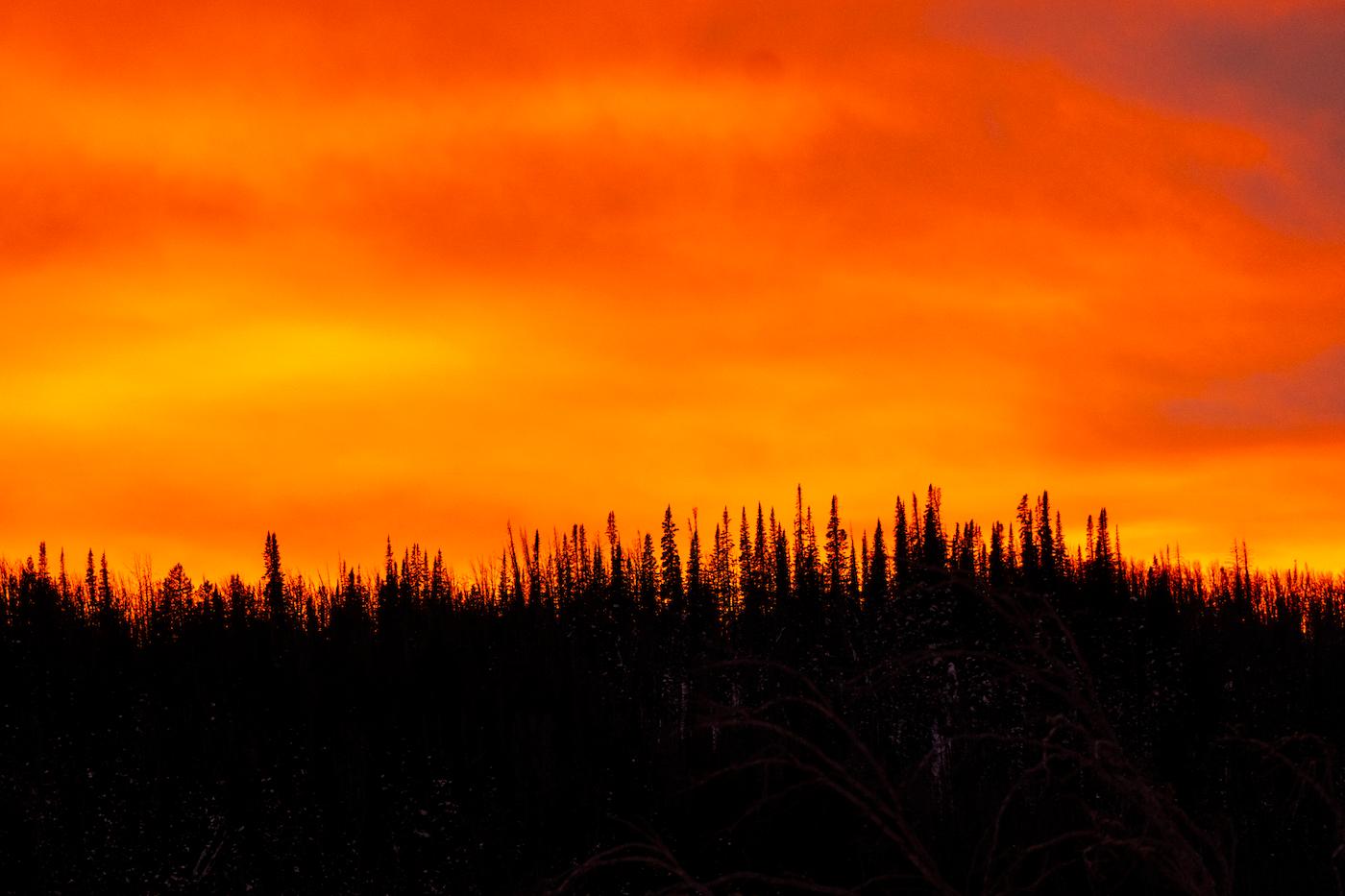 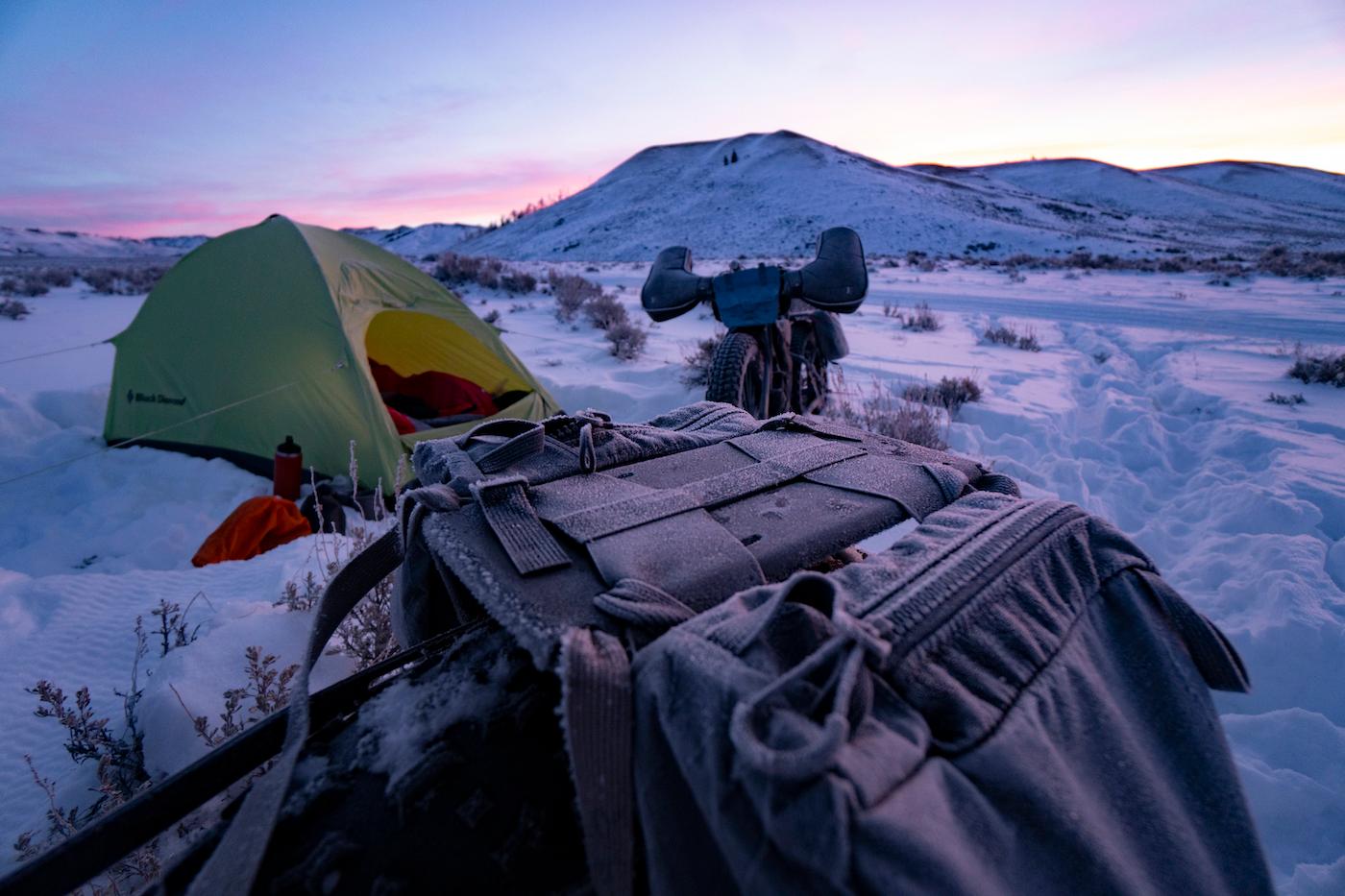 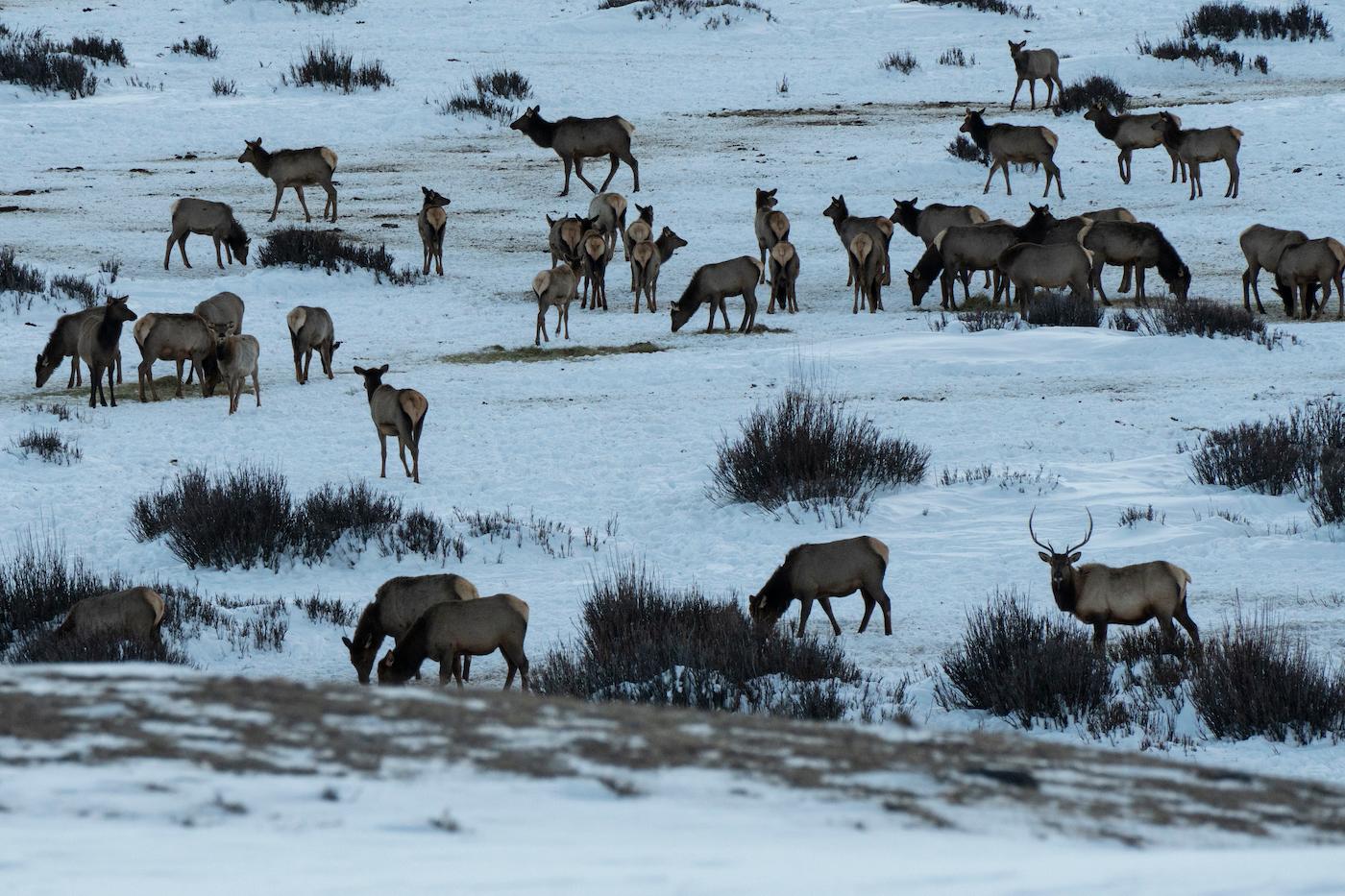 In non-winter months, we mountain bikers are entirely reliant on following trails, inanimate lines that entirely dictate where our rides can take us. These tracks may exist as anything from flowy ribbons of loam to rocky ruts plunging through steep forest to merely a faint tread that seldom sees travelers. Come winter, those trails go into hibernation. A blanket of protective snow allows them to partially recover from the impacts of a season of use. As the days grow shorter and colder, bike travel in the backcountry becomes even more confined, and us riders must succumb to the whims and schedules of snowmobilers and groomers, as well as the fickleness of ever-changing snow conditions. But to experience a landscape in its winter cloak, the muted winter silence when the snowmobiles disappear into the distance, and the feeling of pedaling through areas that can’t easily be traversed by bike during summer months —there’s nothing else quite like it. 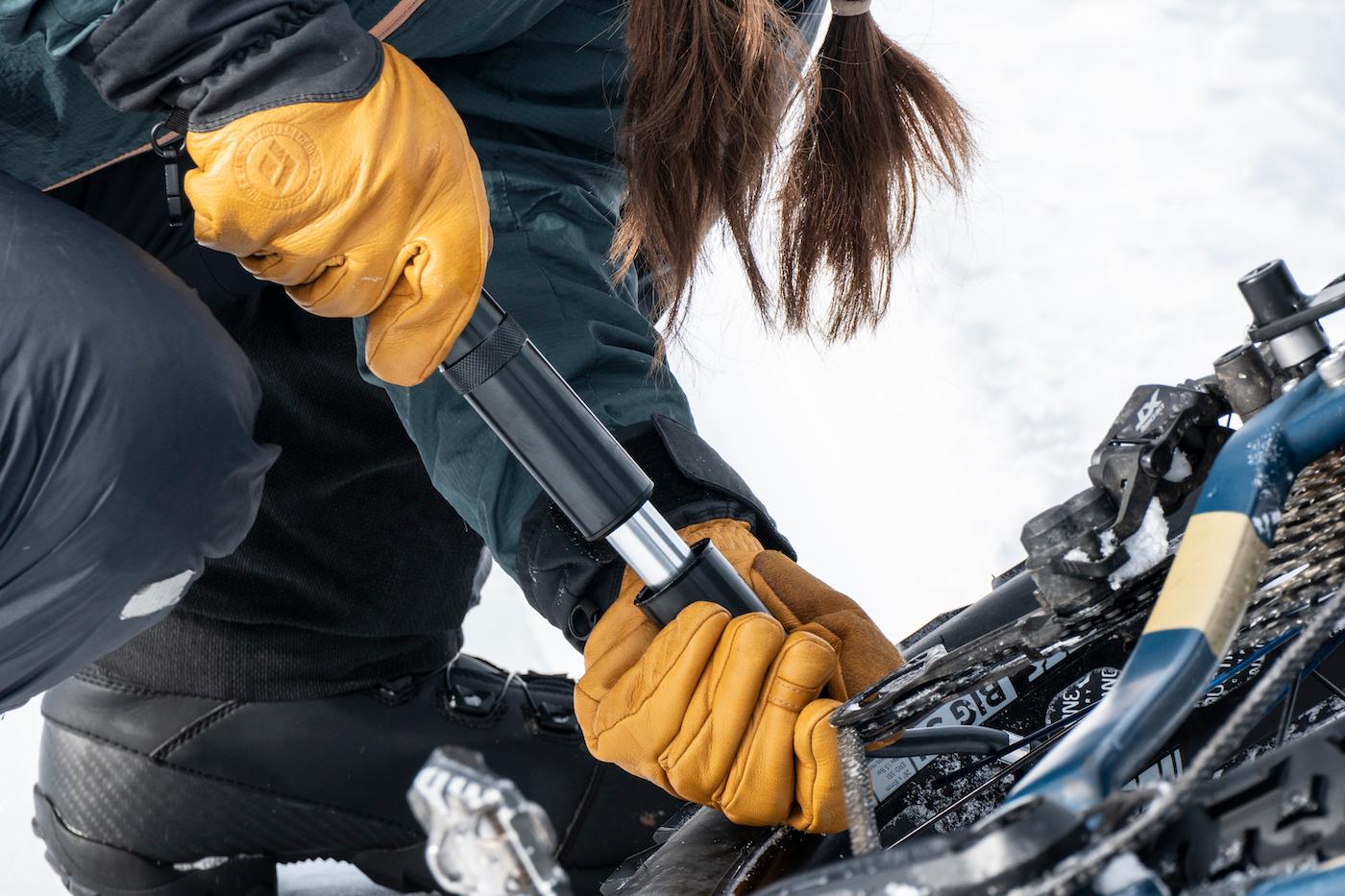 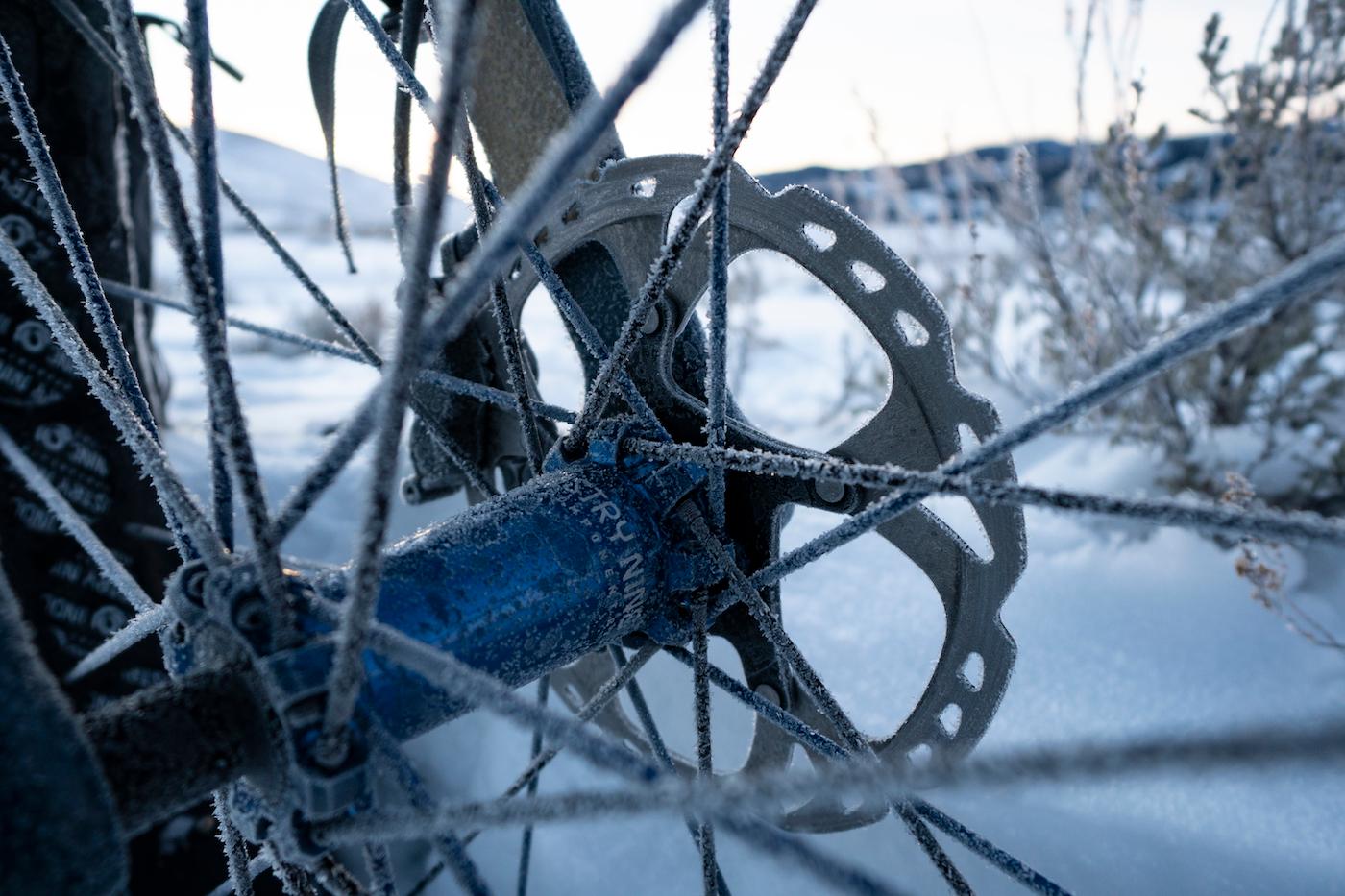 On our third day out, we awoke to a bluebird sky, temperatures hovering around 0 F, and the prospect of asphalt-smooth trail surface. As water for coffee and oats warmed up on the stove, I navigated our post hole footprints from the evening before back out to the trail to assess the conditions for the day. My heart skipped a beat as I stepped onto the trail and barely left any footprints at all. Nothing short of frozen teeth could wipe the grins off Kait;s face and mine once we got rolling. The trail also tilted downward, a welcome relief after two days of rather steady climbing out of the Gros Ventre River drainage and into the mountains. We hummed along at a fast fat bike clip of 8 mph, covering as much ground in the first couple hours as we had the entire first day! 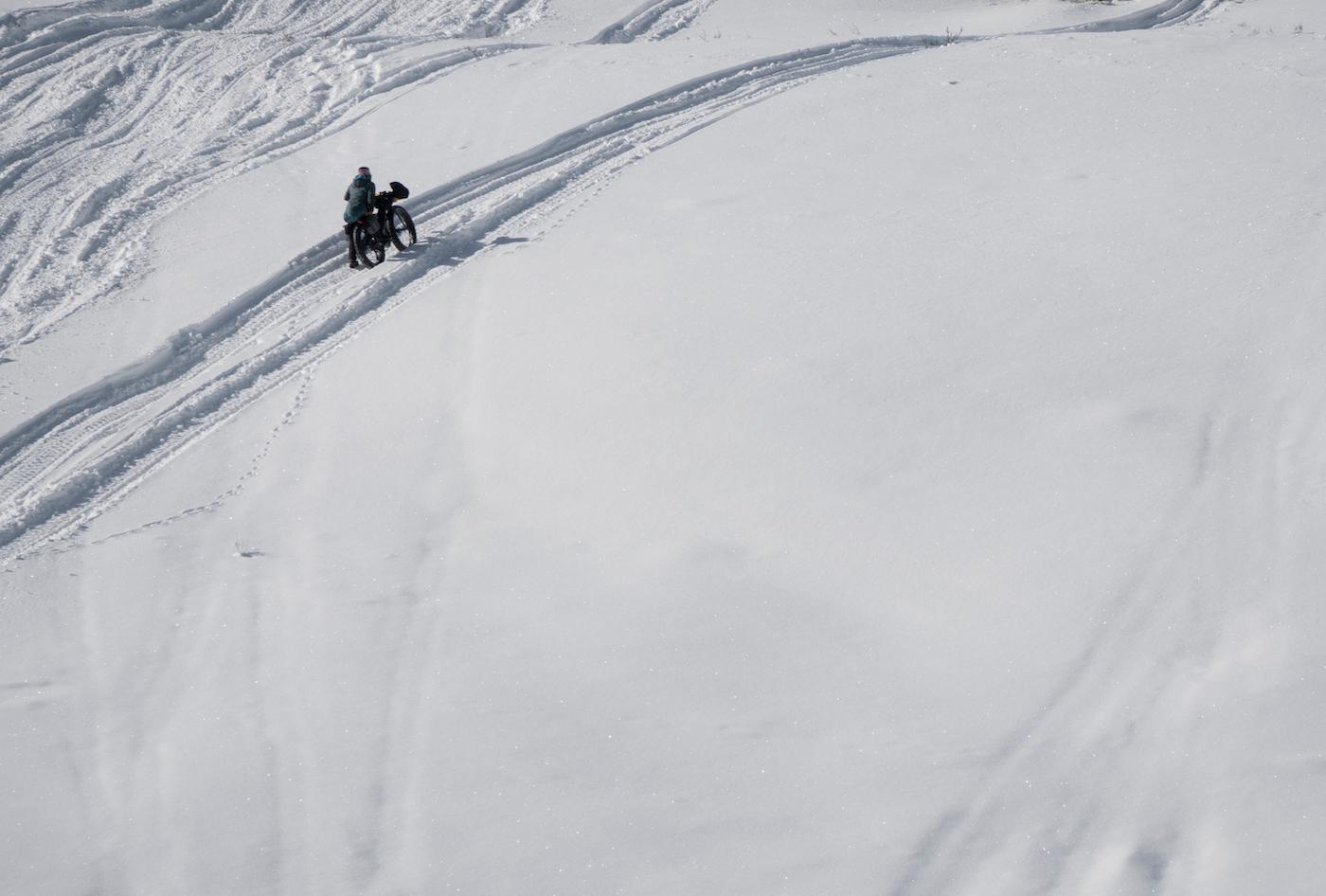 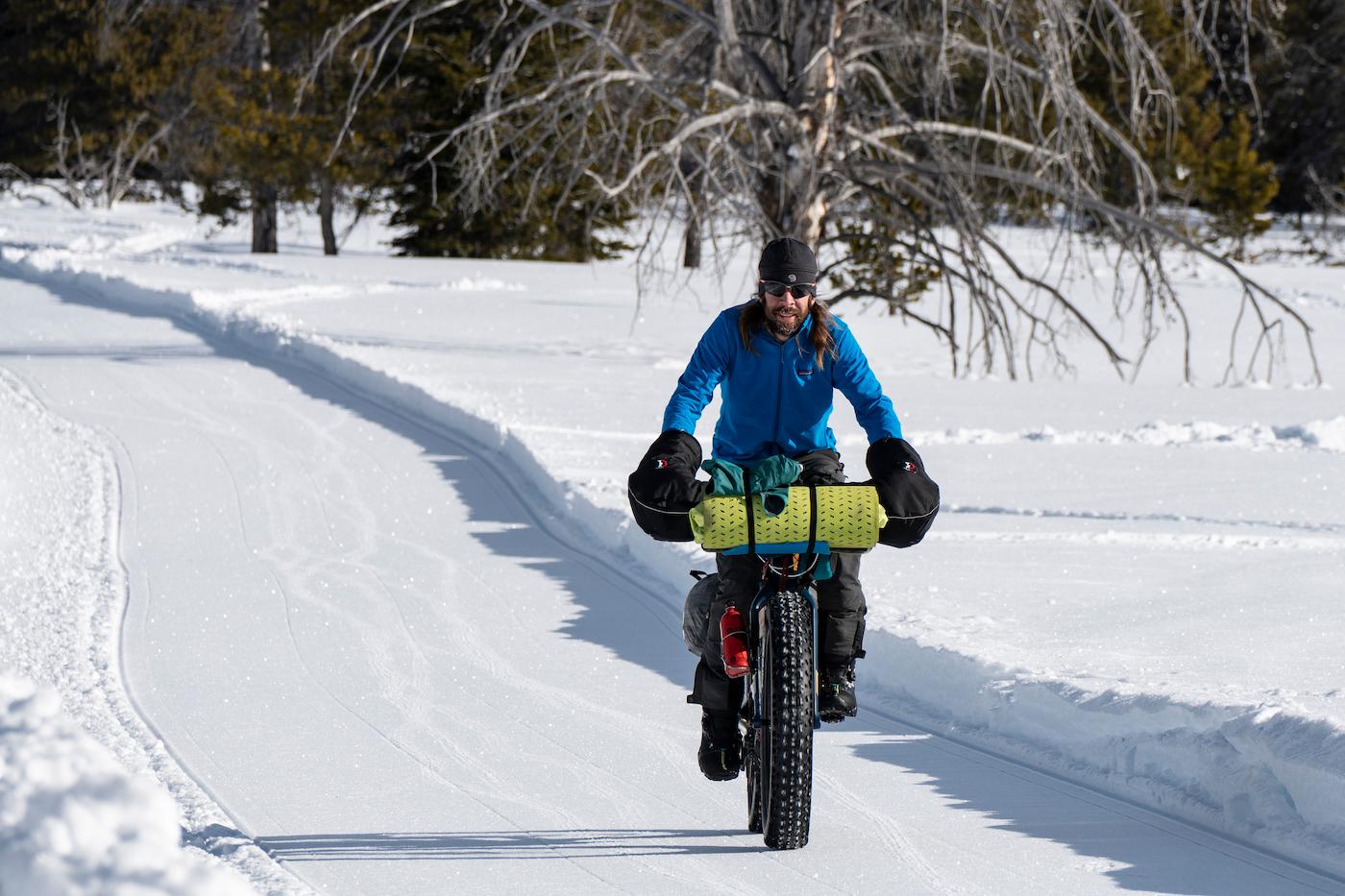 The easy riding allowed my mind to wander. In conditions this exceptional, I wasn’t distracted by constantly searching for the firmest bit of trail I could find, trying to keep my wheels in a snowmobile or ski track, or struggling to maintain drive traction. Instead, I pondered the irony of how winter backcountry experiences like this are so reliant on motorized trail users. The whiny buzz of the day’s first snowmobilers cut through the warming air like a knife as they played on a slope a drainage or two away. Eventually, we hit a low pass where the groomer had turned around, and ahead, a snowmobile singletrack left by just a few machines plunged down a steep drainage and out of sight. The next ten miles, a crucial connection on our route, apparently hadn’t yet been groomed this winter. 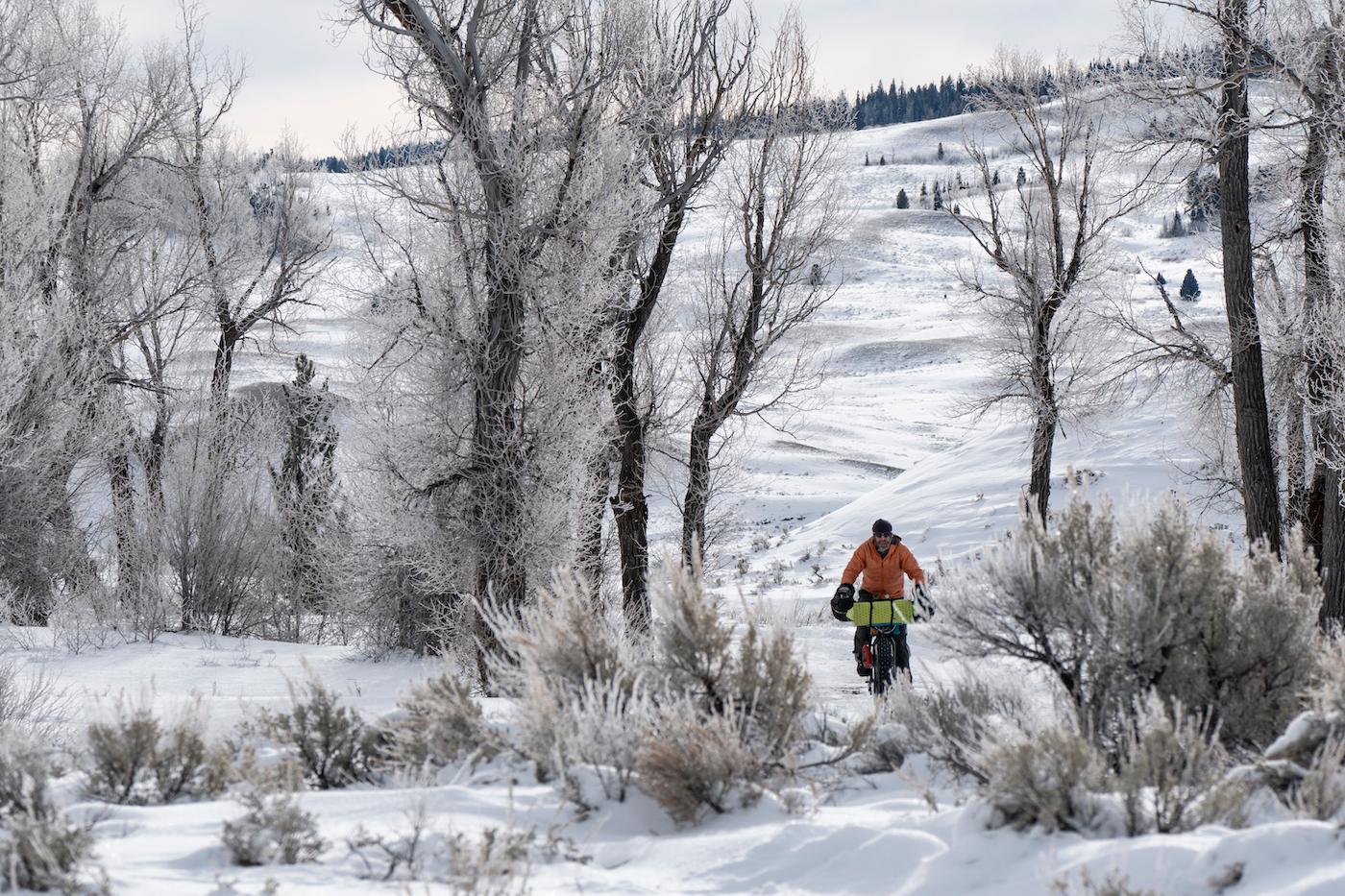 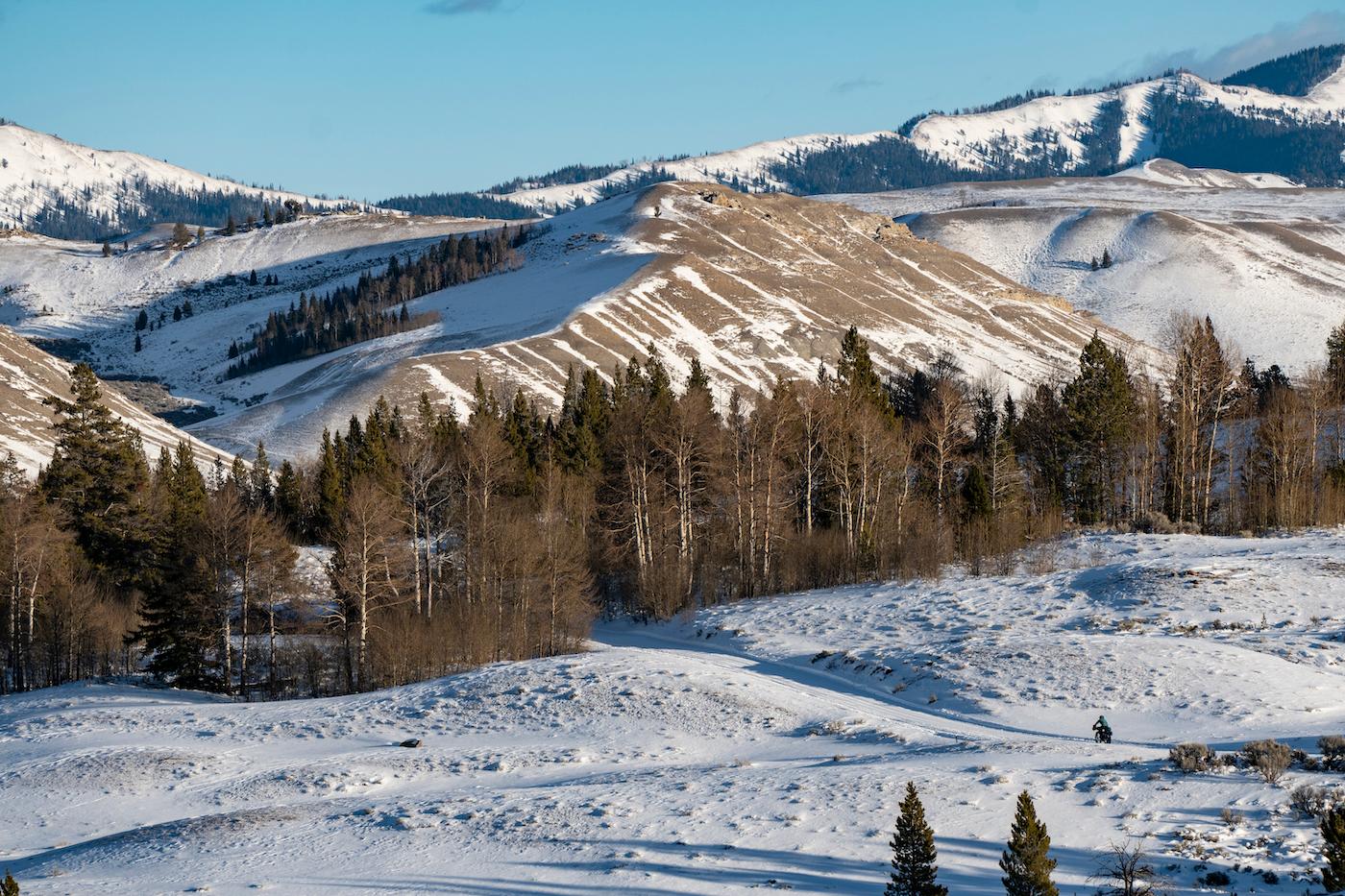 “Well, at least there’s been a little traffic through here” I said hesitantly as we stopped at the top to let some air out of our tires. Then Kait launched into the descent, letting her squishy tires beneath her loaded bike slide through the bends in the track, yipping as she sped through the dark, dense forest. The tracks were shockingly firm, and I breathed a sigh of relief. Conditions can change so quickly, but for the time being, we really couldn’t ask for anything better. 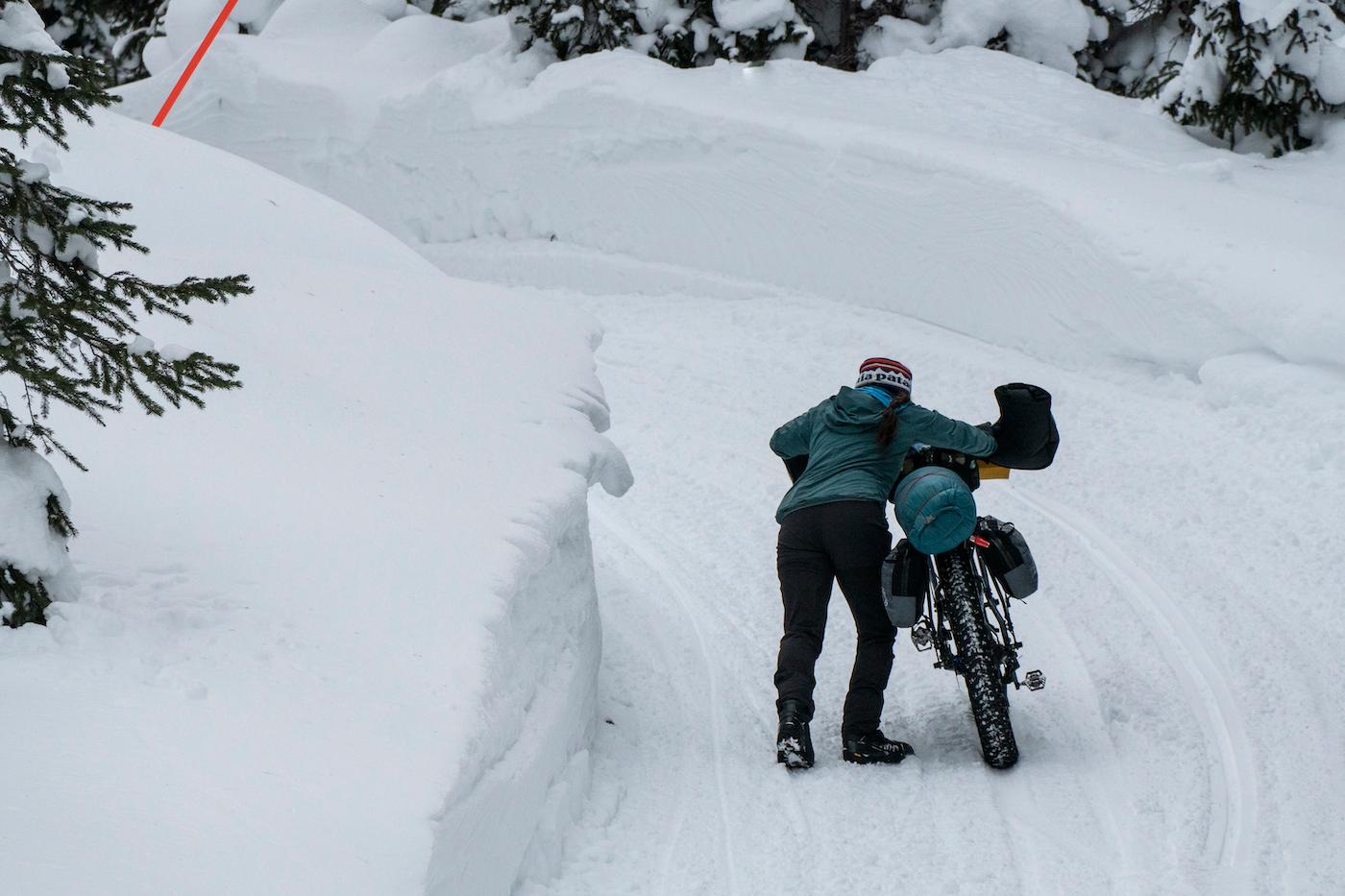 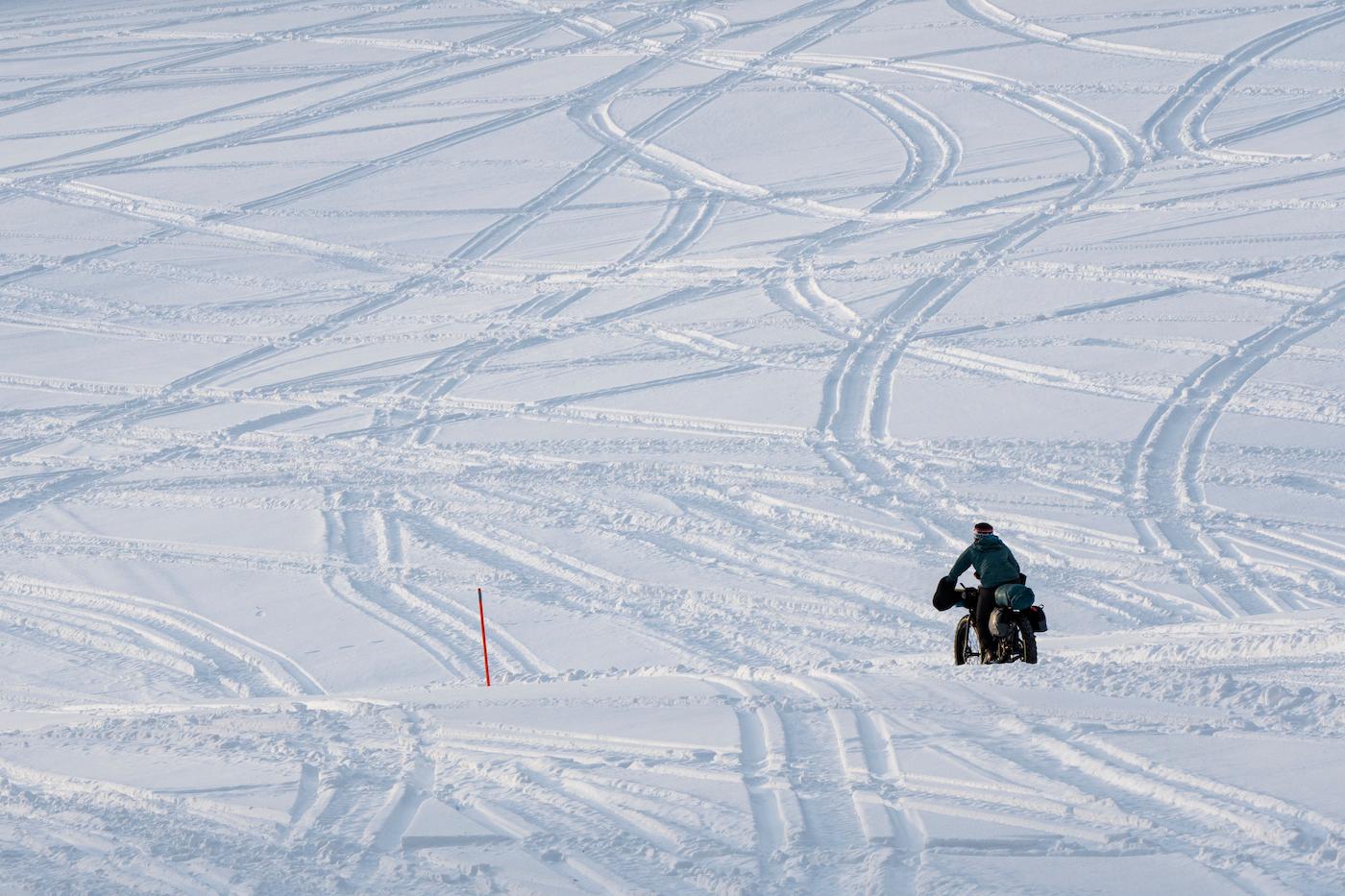 Upon setting out on this loop, we were unsure what the grooming schedule was like for any of the trails in this network. I half expected we might have to turn back just miles in where our route turned off the most regularly traveled trail. For me, there’s an apprehension that accompanies any winter trip since riding conditions are so often a gamble. We knew that some had been groomed regularly, but there it didn’t sound like the most remote trails had seen much traffic. After a week of high pressure, zero precipitation, and cold nights, we took that gamble and hoped that anything that hadn’t been groomed would have snowmobile tracks that were firm enough to ride. And if not, we’d probably just end up having to push our bikes, a reality of winter riding that necessitates conservative planning, flexibility, and carrying far more calories than one might need. 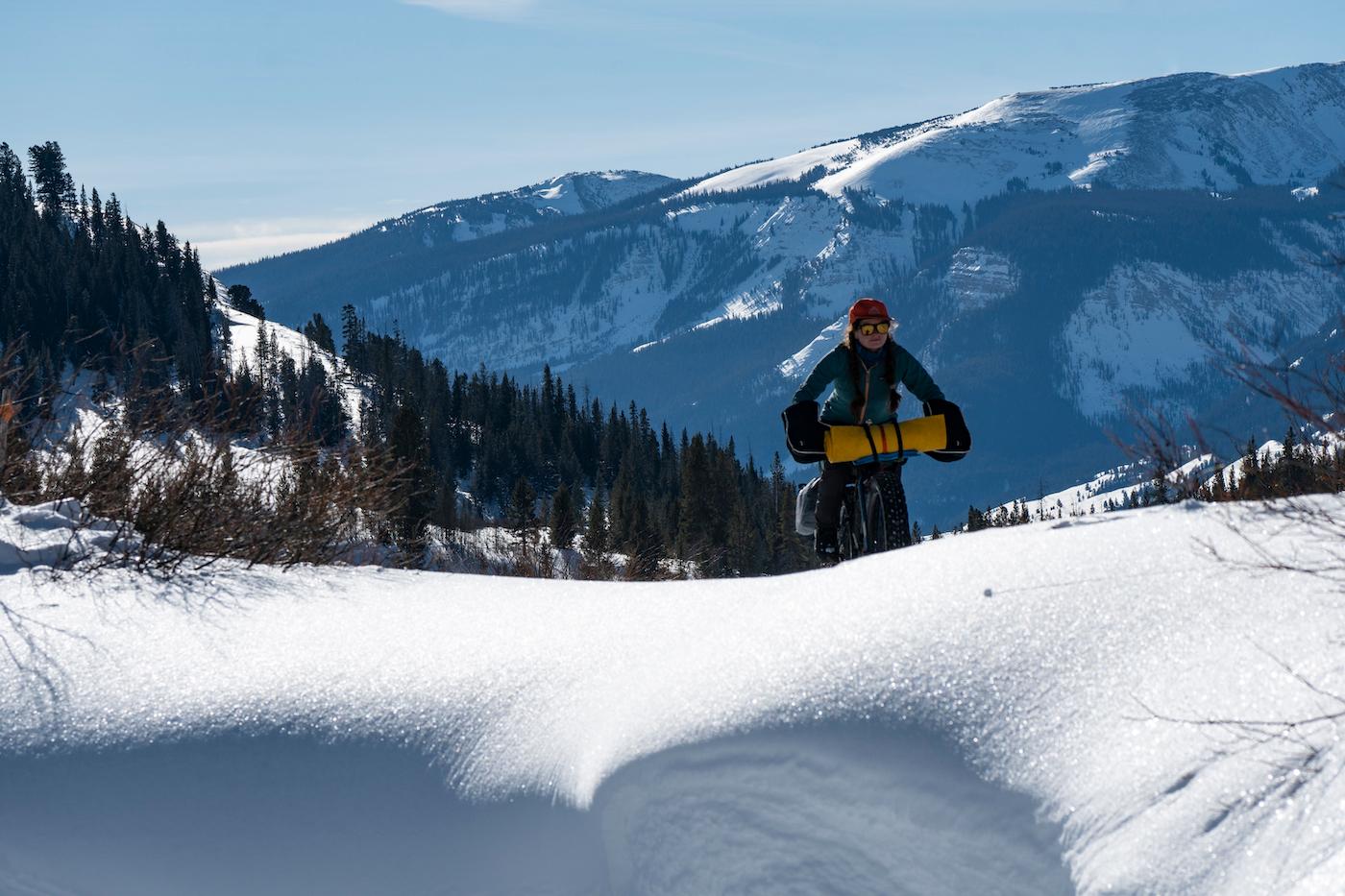 The long, rolling descent back down to the Gros Ventre River continued for miles through a valley covered in sparkling snow crystals that Kait lovingly termed glitter snow. On the short, steep climbs that punctuated the otherwise flowy trail, the few snowmobilers who had been through here fanned out in search of fresh powder, leaving us with tracks too soft to ride. But those tracks consistently reconverged over the top, and then we’d be back to coasting downhill and marveling at the peaks standing high above us.

The Gros Ventre eventually came into view, their rounded slopes above treeline gleaming brightly in the afternoon sun and wisps of fresh snow blowing off the blocky summits. We paused before the final steep drop to admire the scene. Kait gnawed on a mostly-frozen burrito, making a frustrated face as she gave up and shoved it back into her pocket. I snapped some photos, enjoyed some hot chocolate from my thermos, and watched a line of snowmobilers in the distance, silently gliding up a trail. Once we reached that trail, our loop would be closed, and it was barely afternoon! Had trail conditions not been so favorable, we may well have not finished until after dark. When the trail gambling goes your way, it is usually an unforgettably exceptional experience (and when it doesn’t go quite so well, it’s usually still surprisingly memorable).

So I’m going to keep on gambling – you’ll never know how good the riding could be!