As locals we take the beauty of the Sea to Sky highway for granted, but make no mistake: the views are amazing.

Weather Be Damned
Words and photos by Morgan Taylor

I’ve had my eye on the Indian Arm route for years, but never put the pieces together to make it happen. Looking at the elevation profile it seemed simple: 37 kilometres from one coastal fjord to another, over an 800 metre pass. Existing literature indicated the gravel road surface should be rideable save for a handful of washed out bridges. When Lyle Vallie suggested we attempt the route on a few days notice, I committed without hesitation… Lyle has been my accomplice on more than a handful of stupidly planned trips. We were aware that it was early in the year to attempt this route but the desire for adventure prevailed over the early season what-ifs. The 75 km out-and-back should be doable in a day, but we took it as an opportunity for an early start to a summer of backcountry overnighters. The forecast was for heavy rain on Sunday, which prompted Lyle to ask if I was into the ride “weather be damned” – and I agreed.

Lyle is preparing for a two week bikepacking trip in Idaho this summer and brought his Salsa Fargo – which was scavenged from the recycling bin at the shop we used to work at – to which he has fitted a pair of custom-built steel racks. With my neck and shoulders recovering from a recent strain, I latched the BOB to my Chromag hardtail and stuffed my camera gear in the ACRE Hauser pack. While they both have 29” wheels, that’s about where the similarities between our steeds end. It’s always interesting to see how such wildly different setups can accomplish the same end goal. We set out pedaling at a leisurely 11am with happy bellies full of coffee. Rarely does an adventure go exactly as planned, and this one went sideways quickly. With an early wrong turn we unknowingly did 350 metres of steep climbing in the wrong direction. We’d blown an hour and a half but still had plenty of daylight. Back on the right track, distracted by 2000 metre peaks and huge granite walls looming above, we encountered unrideable snow 140 metres below the summit. The next five kilometres – up, across, and down 200 metres on the other side – took us two-and-a-half hours. At 7:30pm, with darkness encroaching and yet still 15 km from Indian Arm, we were forced to either set up camp or ride into darkness. We chose rest, food, and fire at 250 metres above sea level. The forecasted storm arrived with ferocity shortly after we turned in. There’s a reason we found more snow on the backside of the pass: weather systems smash their way up Indian Arm and dump their contents here as they’re forced up the valley. Rain pummeled the tent for hours but quieted down in the wee hours – and we woke up to a blanket of wet snow. The prospect of pushing back up and over the pass was daunting, but we had the means to do it. The creeks we crossed would be deeper and colder than in the previous day’s sun, the new snow an added burden. The likelihood that we could make it 15 km down to see the ocean and back over the pass in a day was low. Lyle passed me a coffee through the tent door and I fired up the satellite communication device to see if we could make a Plan B happen. The rest of this story is in the photo captions… 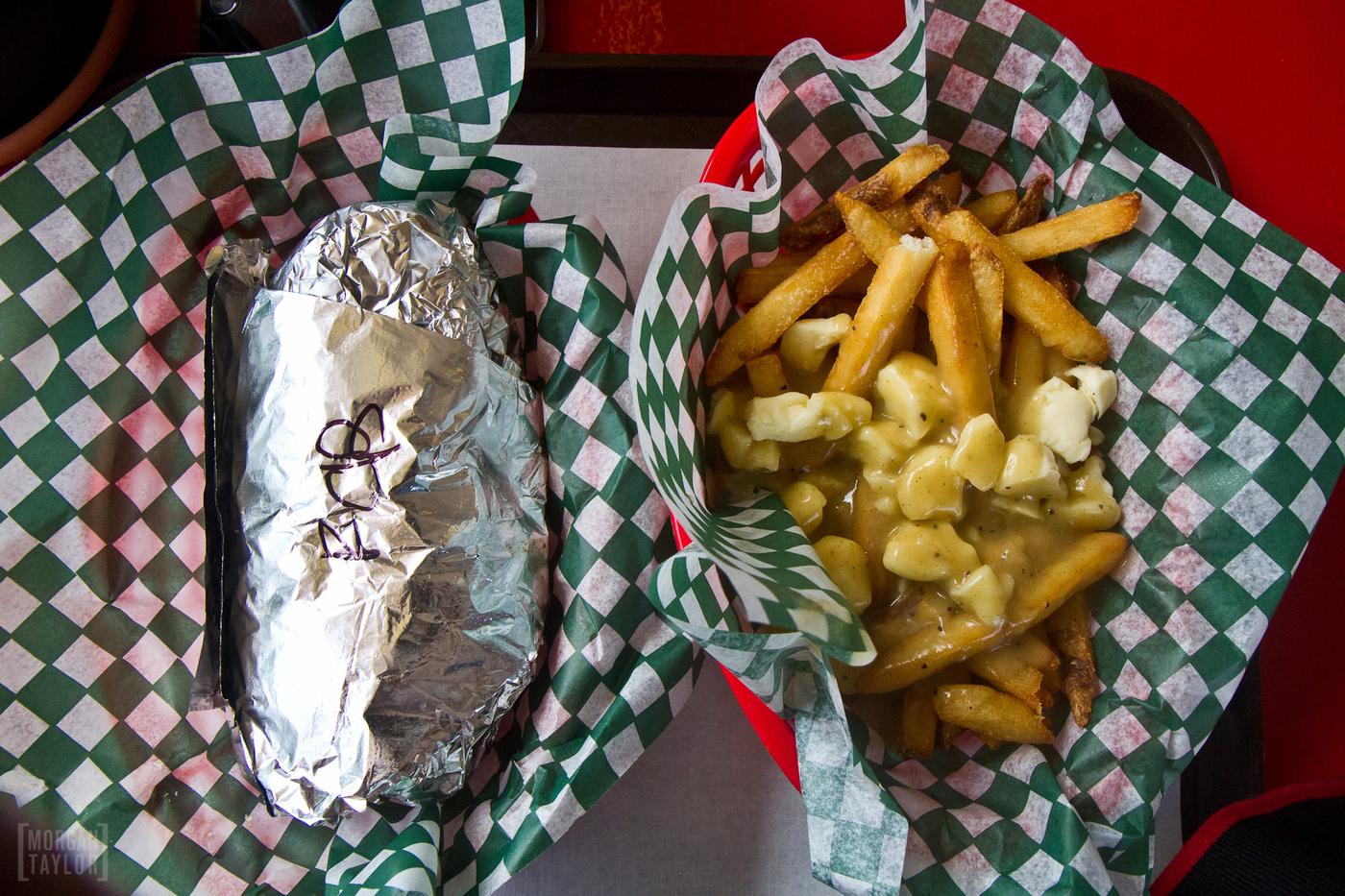 When all is said and done, we’ve drawn the lines on the map that show the places we’ve been. It’s the stories that colour the map and remind us what really happened – though the colours are slightly more vibrant when you get that burrito at the end.