Veld Notes: Rubber Side Up Hoogstraten Belgium
Words by Andrew Juiliano  and photos by Tomás Montes

The wind gusts. Rain blows straight through my skinsuit. I shudder. It’s Forty American degrees and pissing Belgian rain.  The grey buildings of Hoogstraten’s fruit-packing district try to blend into the angry sky.

Neither rain nor wind nor biting chill will stop the penultimate stop of the Telenet Superprestige today, and this is the weather the sport lives for. The fans lick their chops at the shivering, skinny bike racers. The clock ticks toward start time, 3:03 p.m. on a wintery Belgian Sunday, and muddy entertainment awaits the Flemish masses. 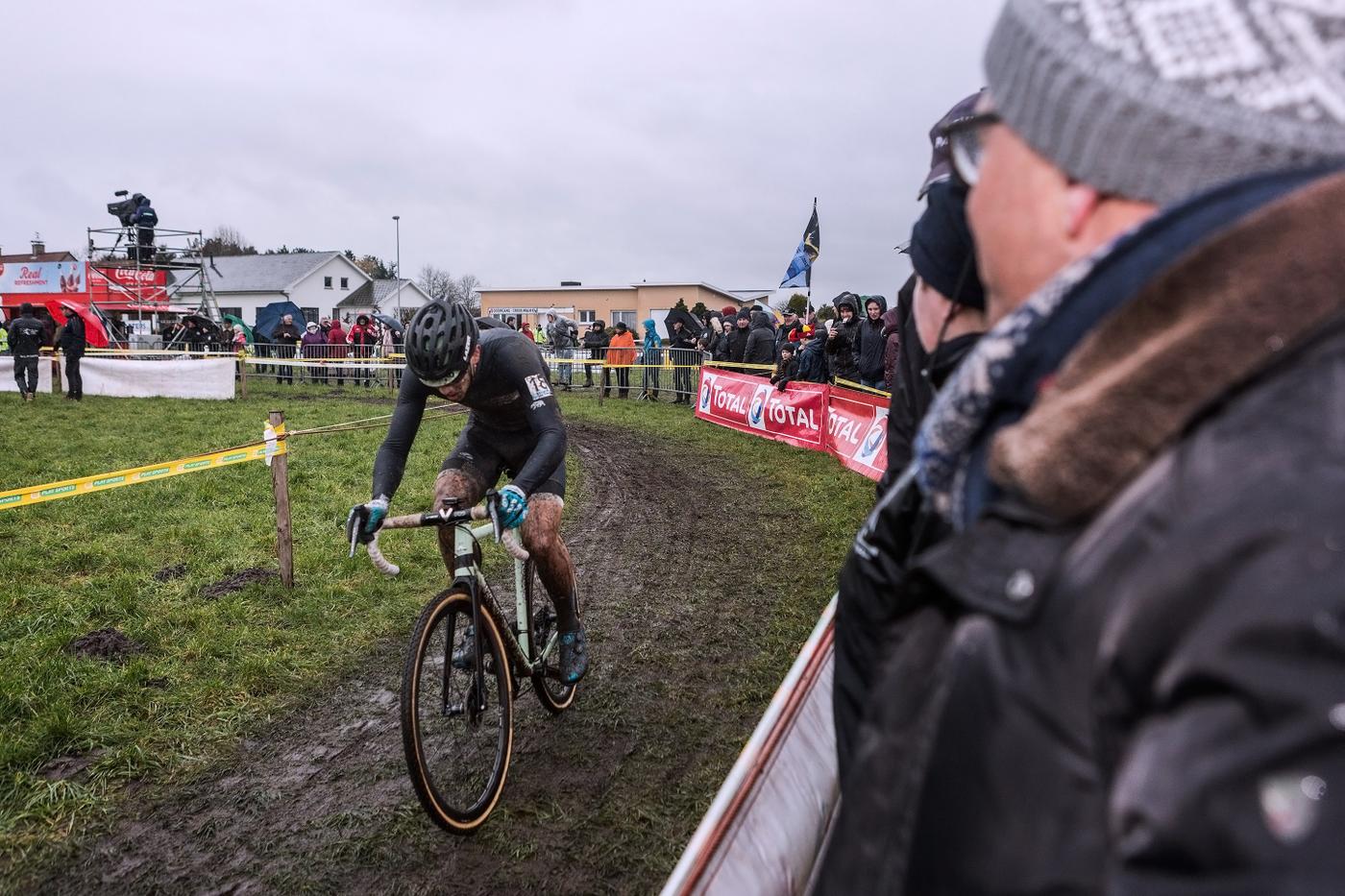 I inch forward, bumping my wheel toward the riders in the next row up. A handlebar grazes my hip. It wants into my row. I shift left and block it. This 12 inches of head start are mine. I glance forward at the lights above the helmets in front of me. They slowly illuminate. Red. Red. Red. Red…GREEN!

Sixty-four cleats slam into pedals. A hundred and twenty eight meat hammers pound away on the pedals, propelling riders down the starting straight. Water flies from tires. It falls from the sky. It soaks us. It splatters in eyes. We go faster. Faster. Weaving. Grazing. Shouting. Harder. Faster. Under the yellow start banner. Toward the first paved corner. It’s up there, but I can’t see it. All I see is frenzy that I’m now fully committed to.

I don’t see the turn. I hear it. Screeching. Scraping. Sliding rubber. The wheels I fought to hold are now flying at me. Ah, the cyclocross start theory of relativity. The bunch leans left. It slides. Thwack. Crunch. A body rolls along the ground the right. Then another. I lean harder. My 20-PSI tires mushing through the apex. I squirm past, maintaining speed. I think, “It’s my lucky day!”

Focus. Breath. The wreck stretches the field thin. Faster. Faster. We speed along the pavement before the road funnels into the first mud pit–a series of awkward, undulating, bumps and turns. There’s one good rut for sixty-three to fight for. 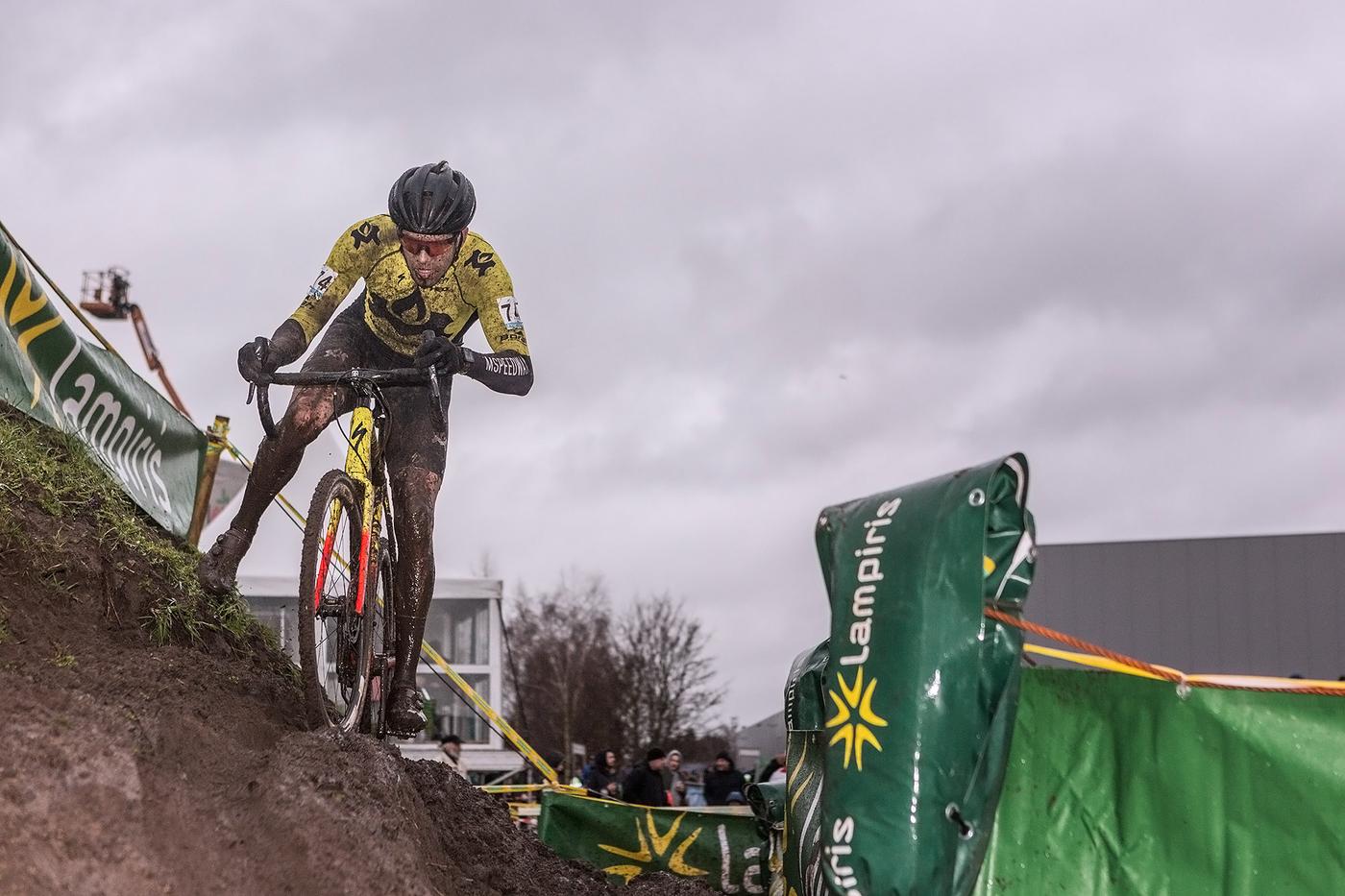 Screeching. Slowing. Sliding. Crunching. The pileup begins. Everyone wants the inside rut that hugs the metal barriers. I opt right into the deep, muddy quagmire. I fishtail toward the tape. I’m not making the turn. I leap off into ankle deep goo and shoulder the bike. A rear foot flies past my face. Phew! It’s my lucky day!

Deep breath. Stay focused. The herd thins further as helmets bob up and down, swinging right and left around the chicanes. Sluurrrpppp. Slurp. The ground wants to suck the shoes off. Stiff shoes fill with gritty mire as we plod through the muddy foot-prints, deepening with every step. Bikes are no longer instruments of efficiency–they are cumbersome bludgeoning devices. The runner in front swings his carbon mace mere inches from my nose as we sling around another pole.

A set of steps and some firm ground. The bunch remounts. One by one, our bikes are once again useful. Well, as useful as they can be laboring through mud like wet concrete. Each pedal stroke is a chore. Slog. Slog. Sloggggggg. Swoosh! The wheels hit harder pack ground and break free. The speed returns. We drop through a gully toward the first flyover. The respite is short lived. The wind lashes my face. It adds insult to the increasingly throbbing injury of the first three minutes of a cyclocross race.

Grunt. Push. Strain over the flyover’s red-carpeted crest. Another blast of wind. Two more grunts and gravity switches sides. It’s now in my corner. We’re over it. Man, are we flying. Flying right into the fastest part of the course with green, glistening grass flanking a well-worn, race line. Flying right toward a corner with no grip. Only grease. The saving grace, the one rut carving left through the corner. I swing wide and set up. 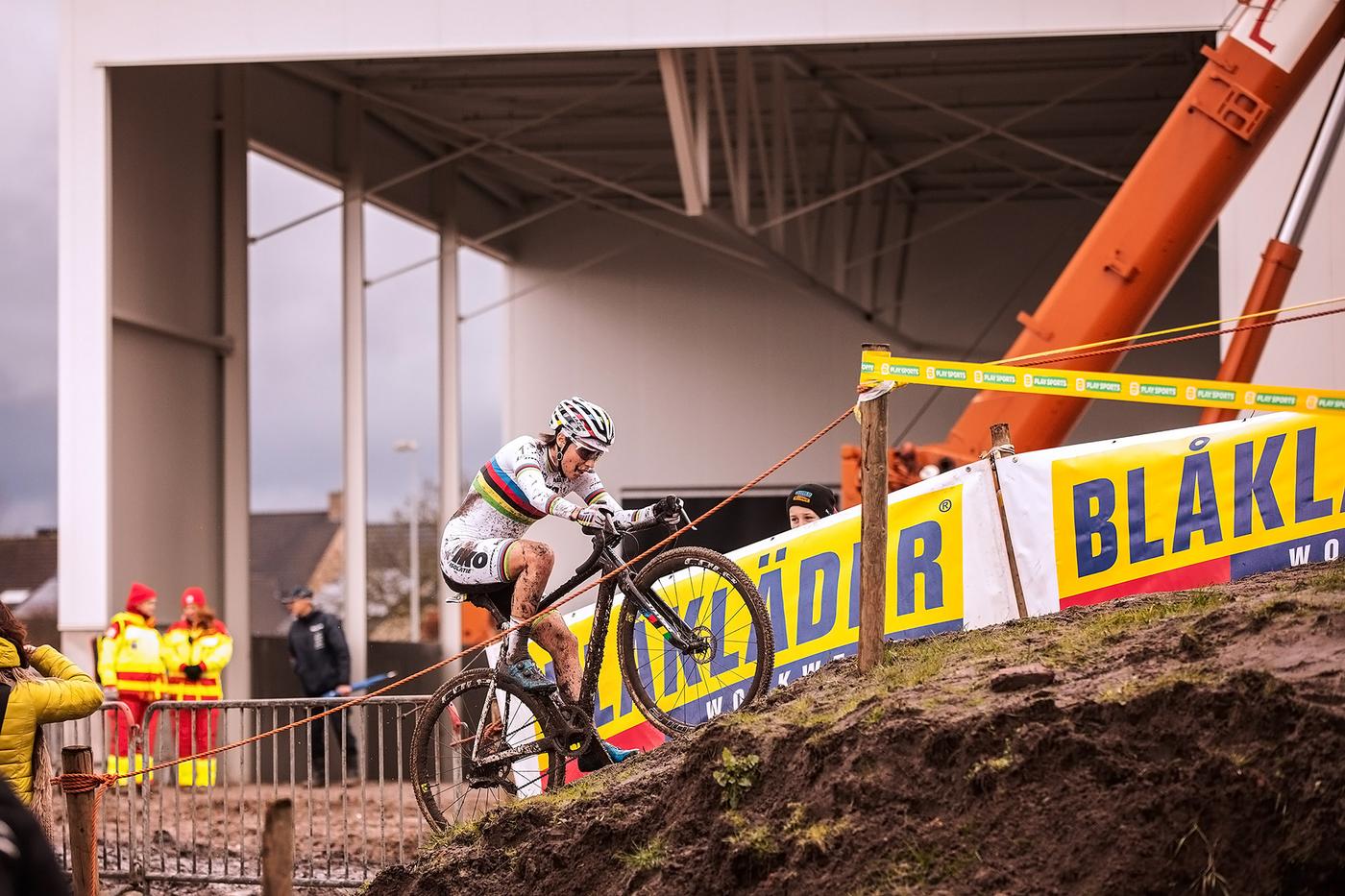 AAARRRRGGGGGHHHHHHHH! A bellow accompanies a bump from behind. I’ve drifted into someone’s line and now into the tape. Tape wound ‘round heavy gauge twine. Twine strong enough to land a Marlin in a sunnier happier clime. But a bike racer is no big fish. For all our fight and feistiness, we’re a measly bunch. No match for giant-wrangling ropes. It bounces me back into the course. The front wheel sinks into the rut as I swoop through the slime and along the pit.  “It’s my lucky day!”

Deep breath. Focus. Accelerate hard along the straight. Don’t blow it. The Belgians at the front speed ahead, trying to distance the Dutch World Champion Mathieu Van Der Poel. He’s won 29 races already this season. Their hammering legs pound the field thin, thin enough that we race single file through the corners. We each get our shot at the ruts. No more bumping and barging. Order has prevailed. For now…

We ride the brown snake as it slithers through the field. My front-tire slips, searching for grip. It’s looking for grip where only the softest, squishiest of tubulars knows where to find it. It locks in. Rail the ruts. Slip through swoops. Hammer the straights. Rail. Slip. Hammer. Rail. Slip. Hammer. The rhythm of the race thumps along.

Another corner. Another flyover. Grunt. Grind to the top. Speed down the back and swoop to the left. Don’t hit the rut. That one goes straight into a pole. I aim inside. Two riders ahead do not.

CRACK! A scream. A bike flies overhead with a folded rear wheel. The next rider hits him and sprawls across the track. His bike lands in front of me. Nowhere to go. I’ll ride over it. I flip over it. Lucky day…

Thwack, onto my back. I slide far enough that it takes four steps to retrieve my bike. A body writhes beside the pile of lycra and carbon. I untangle my bars. Remount. Grunt. Grunt. Accelerate again. It’s now my turn to watch racer after racer speed past. 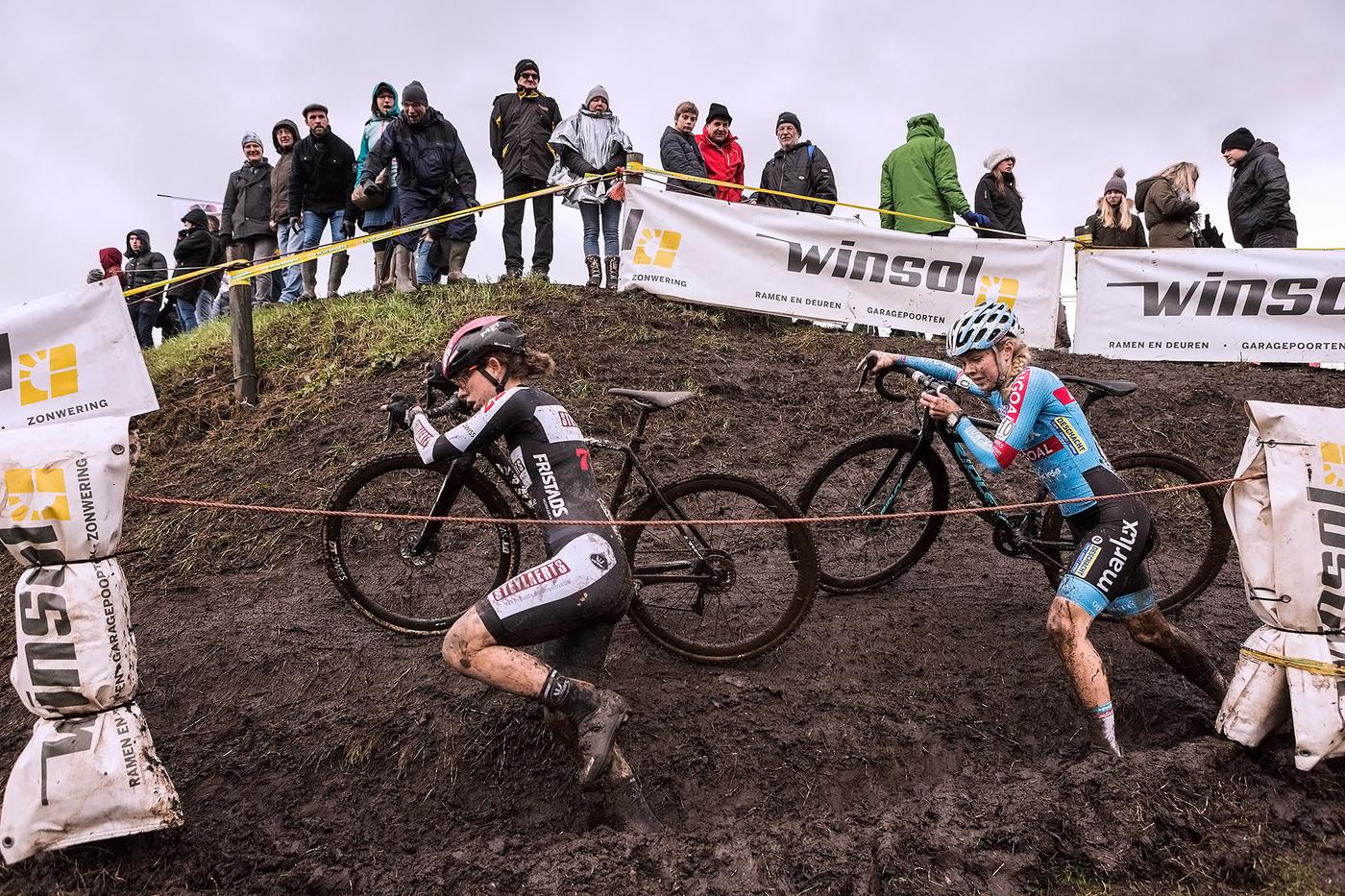 A 10-foot plunge into a ditch. Into a rut. One of five. Pick the right one. Is that the right one? Grab the brakes. Grind. Screach. Shit. Nothing. The brakes won’t save me. I’m committed. Slam the front wheel into a hole. My legs crumple. A foot pops out. Drift into the goop. Slam cleat into pedal. Grunt. Grunt. Slide Repeat.

Run through an off camber ravine. The footprints are shin deep. White padded posts pinch me between the rope and a double-overhead mound of muck swelling from the muddy sea. I stumble. I wobble. I’m through. I chase the next wheel to the top of the mound. I remount and plunge down the backside.

Into the rut. No. Into a hole. Hook to the left. Wrestle. Fight, Find the traction. Slog. Slog. Slog through the concrete. Almost to the pavement. Respite. Relief. I round the bend. The orange finish banner spans the road. The lap card reads seven to go.