Tandem’s always been like Fat bikes to me, I don’t really know why but I want one. They’re easy to fall in love with I guess, cartoonish and rad/dorky looking, raising questions about how it would be chasing the sunset on one. Ever since I designed the Sequoia at Specialized about three years ago, I’ve been thinking about how to make a tandem. As a designer and bikeaholic, I always have a million ideas and projects around, 99% never seeing daylight. A Sequoia tandem, however, would be a project fairly easy to pull off if made the right way.

Every year, a large number of paint samples are being ordered or painted by the design team at Specialized. Usually, these frames are not rideable but rather looking samples but for steel bikes, they’re real production frames and suddenly, I was sitting on an extra size 58 and I already had the frame I crashed and broke in Pasadena two years ago. The top tube was cracked but the rear triangle intact. So, A front 58 triangle and a rear 56 triangle could make a tandem. The frames were cut up during a lunch break, a drawing was made on a van-commute and there we go; a tandem. Well, a year later, status quo, just another idea in a folder. I made a render and put it on my Instagram as a portfolio piece back in January 2017. This is a secret of mine, every time I can’t stop procrastinating, I just tell the world about it and I get forced to make it. The comments from all of you made me realize this thing needed to happen sooner than later. Everyone had so much stoke. Well, six months later and even more procrastination, Dylan Buffington got on my side and pushed me over the edge. We made a BOM but realized the Specialized workshop and welding facility was in a big relocation frenzy so instead of building it ourselves, we called our friend Brad Hodges of W.H Bradford in Rancho Cordova to see if he had time for a side project. I drove up to Brad mid-September with the two dismembered Sequoia frames and a scale 1:1 drawing and spent a full day in his workshop finalizing the build plan. The SIQuoia tandem is not an off-road machine but built for touring on mixed terrain so the geo is pretty classic and designed for drop bars. Me, as a captain and a stoker, sized 52-56. The Boob tube is (Google Big Bertha Cannon) a massive thing that Brad ovalized and tapered using custom dyes, everything else is standard straight gauge tubing, nothing fancy. A couple of bosses were added for future bike packing type frame packs and all of a sudden, we had a raw tandem frame down at the office. I made a paint design inspired but a Tahoe National Forest sign I passed during the Sagan Fondo in Truckee, a Manzanita base and yellow lettering. While digging for paint, a colleague showed me her secret stash of Murano pearls she kept for special projects and that sold me. Murano pearls are what you’ve seen on all the most classic American muscle cars from mid-sixties to early seventies. A crisp and saturated pearl effect appears when sprayed on a black base. I used a red Murano to create the Manzanita and a gold for the graphics and I added a dash in the final clear to tie it all together. 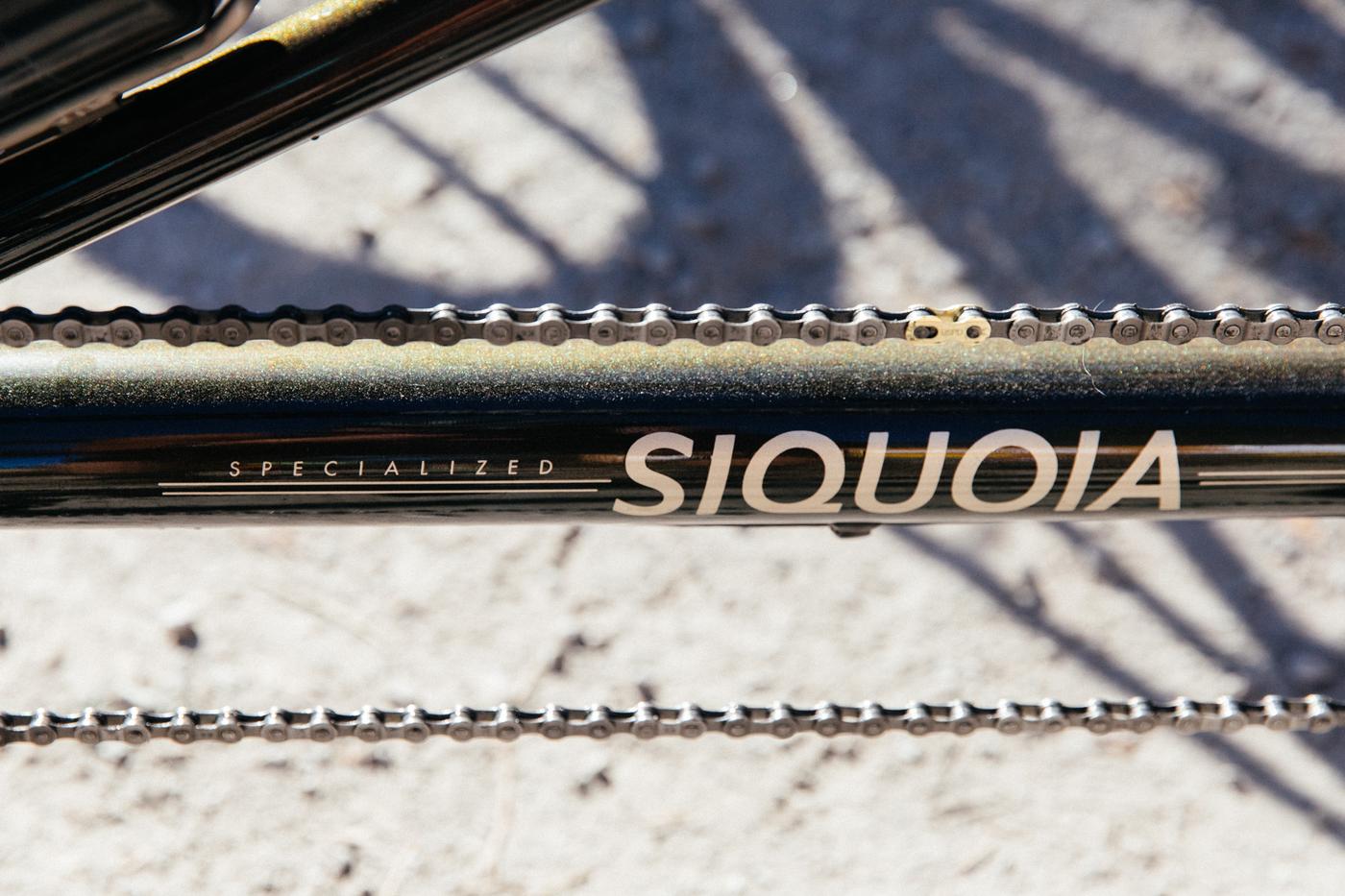 A funny story about how Specialized once fucked up the naming of the Boob tube
“Boob tube” goes back to the mid-’60s and was coined by Pete van Nuys, who made up this term when no one could tell him the proper name for the tube connecting the bottom brackets of his tandem. After deciding “bottom bracket tube” was too long and determining “B-B tube” was too short, Pete concluded “boob tube” was just right. Boob tube soon became a common term and achieved publication by the early ’70s. In the mid ’70s boob-tube was found on the frame building forms used by Bud’s Bike Shop when ordering tandems from frame builders around the world.

In 1976 the Taylor brothers of Jack Taylor Cycles in England became the first foreigners to adopt this terminology. By the late ’70s, boob became a standard noun used by Japanese frame builders and their suppliers to describe a tandem’s special tube (and when Tange’s engineers confer in their native language, “tandem” and “boob” are about the only words I understand.) In Italy, too, this word is used by tube suppliers and frame designers when conversing in Italian. “Boom tube” is a bastardization of boob tube that first appeared in a Specialized tandem ad published in 1991. Though someone at Specialized admitted this was an unfortunate typo, the term is easily understood by sailing enthusiasts who note the similarity of this tube’s orientation to a sailboat’s boom. Some prudish people have continued to use this word as it seems to them a less-crude variation” (from Gtgtandems) 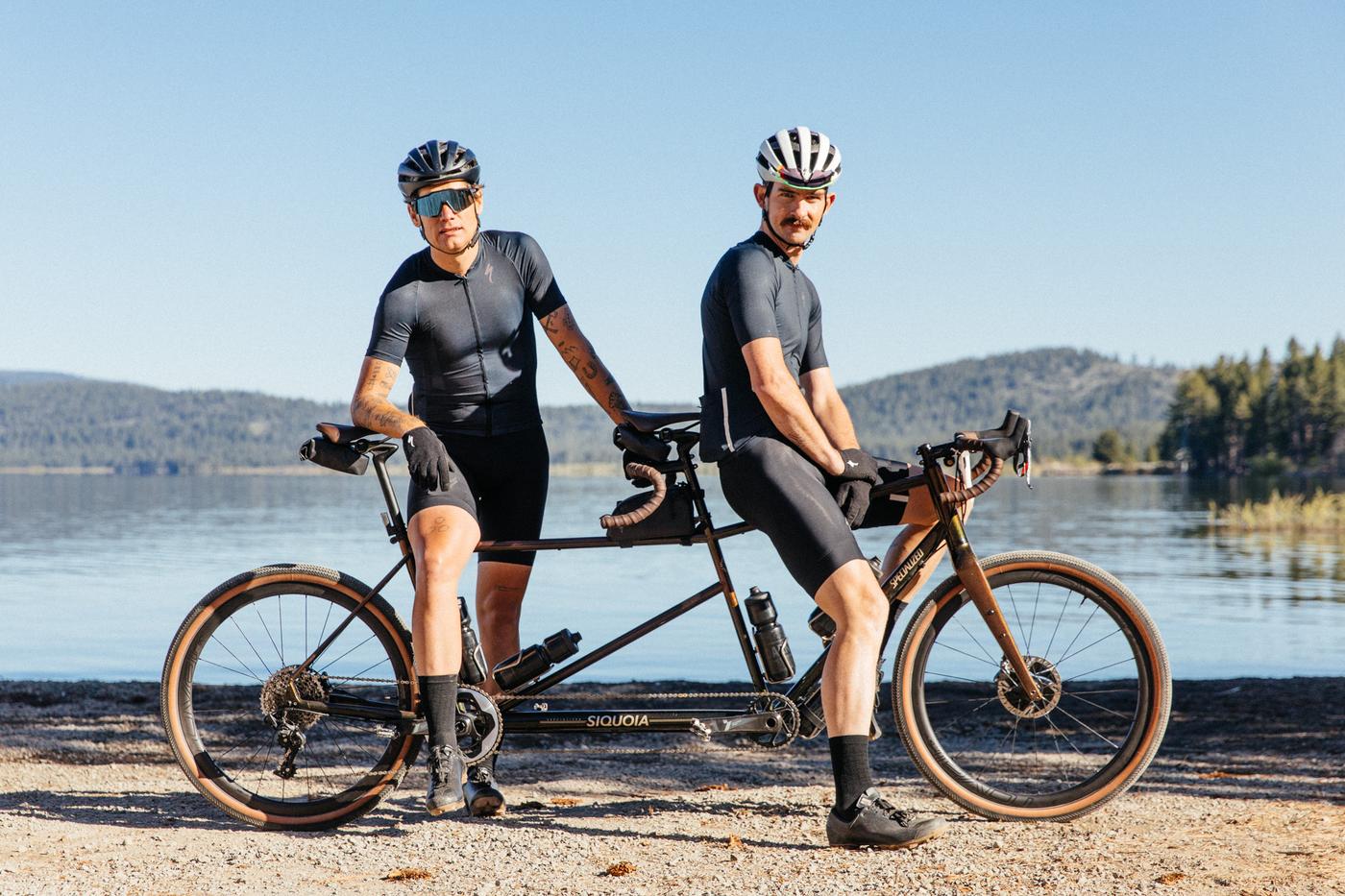 Named the SIQUOIA because of how Siq it is, we built her up with a mishmash of used components found in crates at Specialized. SRAM Red, Eagle, Rival and Force. Instead of customizing brake caliper adapters for bigger brake rotors, we used 160 mm Shimano Ice Tech discs and hoped their superior cooling technology would be enough. Our dear mechanic Tree was cocky enough about the Timing Chain (chain between Captain and Stoker) to not use an eccentric bottom bracket or ghost ring. He was confident that the SRAM narrow-wide rings of the right size and a 9-speed chain would do the trick and he was right, we managed to get perfect chain tension without special components. Same goes for the wheels. Instead of investing in custom wheels with 36 holes, usually preferred by tandem riders, we opted for a pair of extremely strong and light ROVAL CLX 32 650b carbon wheels and we save a ton of weight by trusting these high-quality wheels. The trickiest part about this build was the hydraulic brake house coupler we machined in-house. We did not have time to order extra long housing or official couplers so a quick and dirty machine shop session made it possible to extend a standard SRAM housing.

This is as close as I got to this diesel-powered fun wagon during the event!

The maiden voyage of the SIQUOIA was made at the 100-mile Lost and Found gravel race in the Lost Sierra, California. Dylan Buffington and I had made one lap around the Specialized campus the day before the race but agreed we would dial things in as we rode. I gave Dylan the Captain role for his ability to do insane things on a bike (in a safe-ish manner) and I became the stoker for my rando freight train abilities to just shut the fuck up and diesel through hundreds of miles in one go. Together we rode a fast and incredibly fun race. We felt like we brought a nuke to a fist fight on the flats but quite the opposite on the many and big climbs. Tandems are fast on the flats and downhills but slow on the climbs. We got ahold of the concept of riding a tandem about half way and finished second behind Amanda’s and Scott’s Rock Lobster Tandem after a few mechanicals. I’m sold, I absolutely love this thing and know we’ll have many fun adventures chasing sunsets.