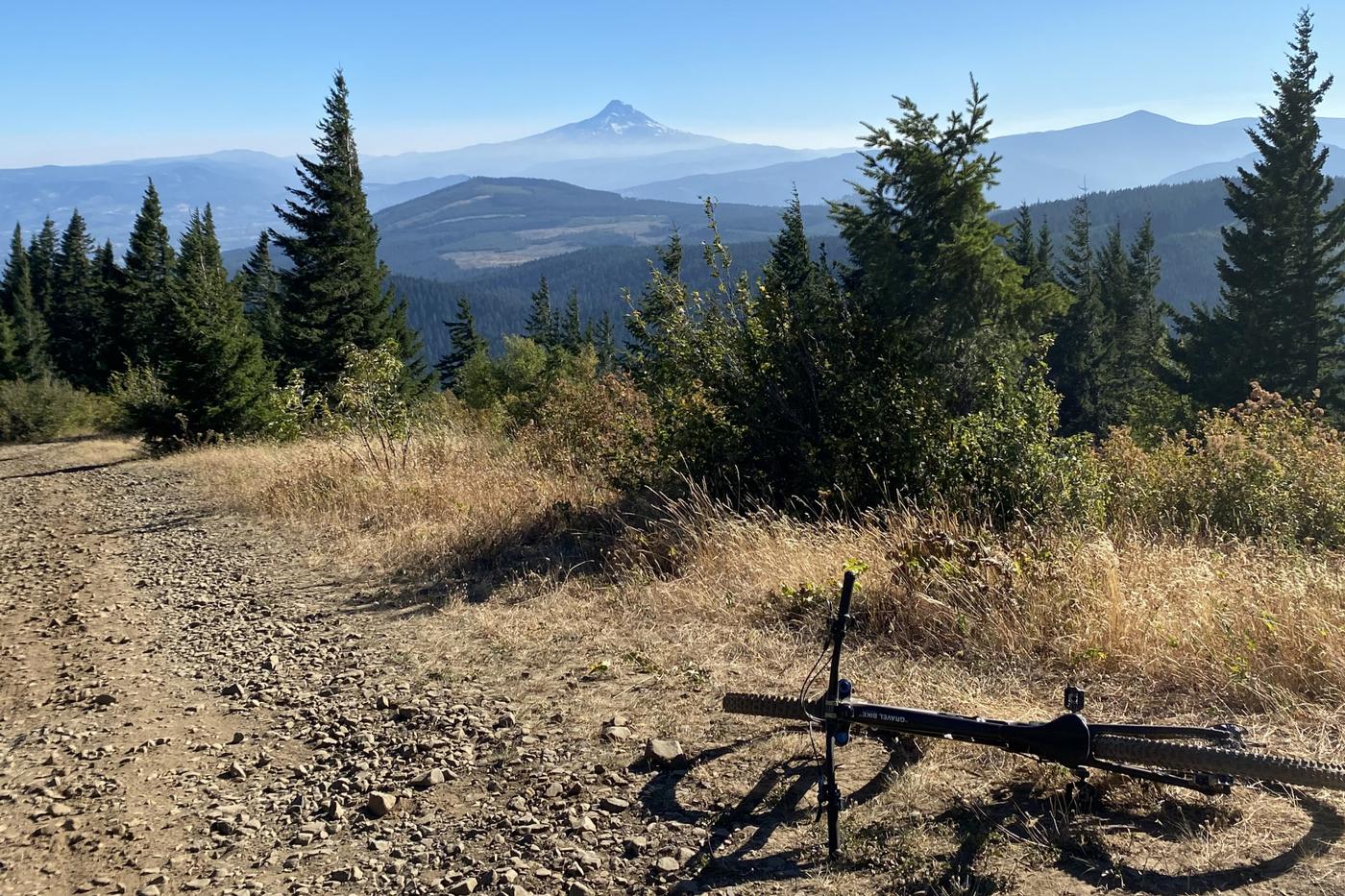 All is not lost, not yet, I am with friends, old and new. We’re maintaining a safe distance and we understand the incongruence. That the point of this, for all of us, is intimacy. Is the simultaneous co-creation of memories. The sky is empty; depthless and abyssal. A perfect poker face. The forest crinkles and the greens are khaki.

We’re shuttling. The shuttle is long, the bikes bounce and jostle careening into each other, we tried our best to keep them apart, but there is evidence. There is always evidence. Two of us are in the back. We’re not yelling, not quite, the conversation ricochets; what caused inflation in the late 70s, the results of rampant individualism, rebound settings, tire pressures, Ceteris paribus. Somehow there’s silence in there too; you know how it can happen.

When we get to the top it is the actual top, groomed for some sort of communication equipment. Around us, the trees fall away, a monk’s haircut. These were the scribes who kept and coddled language and were here with a 5g antenna… is this a bridge too far? Reaching, reaching, reaching.

Mt Hood stands grand and singular to the south,  a sash of cloud wrapped at its base. A stronghold at the frontier of the horizon. The Columbia River Gorge a moat at its feet.

It’s not quite high noon but some of us have had beers. I’ll later think it’s my way of escaping accountability for my poor cornering, but I know it’s just my way of escaping. We joke, nothing blue, just a lot of jocular ribbing and self-effacement. I have to piss, and when I do the urine splashes and floats on the dust like oil on vinegar, or is it the other way around?

There is an order. We give each other ample room, it’s too dusty to chase and press, to track and dog the one who leads. It’s no use the trail is dusty, ahead of my tire it writhes and twists a generation of vipers their hard fangs obscured. No, no one wants to be bit. We establish intervals, to each their own. The riding is singular, our desire communal. We’re looking for an escape, for confirmation, for the concentration that occurs in near-freefall that say’s “look where and only where you want to go.”

The path is a riot of sharp chipped stones; schist, gneiss, basalt? Yeah probably that one, I’m on image search. Steep chicane to flat corner to dust on rock and my momentum comes to a halt. Try again. Don’t let anything creep in.

The track is one of those hidden, no Strava, shhhhhh deals. There are signs.

We all agree. It’s good. Not just the track, the whole thing. The order is fine, everyone accounted for and we’re eager to get back to that space, mind off, reaction on, breath hard, don’t brake too early, don’t brake too late.

The sound of rocks that clap like clamshells fade and the track somehow flattens out and gets faster. Short, sharp corners give way to long late apex parabolas. Hale colored grass hangs over the trail, combed over, danger lies below. How are those ahead going so fast? Trust and Ignorance. Skill probably has something to do with it. The forest is silent or is it just that the sounds are swallowed by the rushing wind. The rushed static of speed.

At the bottom we joke, everyone is just fine, everyone is ok. A couple of scrapes, but those are just tokens. Momentos. A cue, a passport to a memory, an escape.

At home, I wonder if I deserve it.

A nod to “The Rescue will begin in its own time“