Wanna live it up in Moab, Utah for three days, ride some killer bikes by Ibis, get to know more about Kitsbow in the process and much more. Head on over to Kitsbow to see the details!

Utah is a strange place, coming from someone that lives in Texas, but there are so many incredible places to shred there. During my recent trip to Moab, I opted for my Yashica T4 one afternoon, instead of my bulky 5Dmkiii. When I found out we were going to be riding singletrack all day on the RS-1 fork, I wanted to see how it felt without a backpack on, so I threw my point and shoot in a fanny pack and smashed onward.

We began in Grand Junction, ColoRADo and headed to Fruita for pizza at the Hot Tomato – from there, it was off to Utah and the SRAM Trail House.

Look, Moab is awesome. The trails are incredible and even super easy singletrack blew my mind. Oh and dinosaurs.

It’s safe to say that Rock Shox was going for a bit of a throwback with the new RS-1 inverted fork. Other companies have tried the inverted platform, to no great success, yet motorcycles have widely adopted the design. In mountain biking, just about every new leap comes from motos, so why has the inverted fork not taken off? There have been a few reasons, the most glaring being stiffness. There’s no bridge, like there is on a traditional suspension fork. No bridge means the fork lacks lateral stability. That’s a big problem, especially when cornering.

Rock Shox’s new RS-1 fixes that problem with a concept they call Predictive Steering. Marketing jargon? It may seem like it, but Rock Shox is onto something, albeit with a bit of a sacrifice. In brief: the RS-1 requires a proprietary hub, which uses a new 15mm Maxle skewer. Why? Because this hub has a massive 27mm axle that slides into the hub body, essentially, or reportedly solving that lateral stiffness issue.

So, is this marketing voodoo magic, or does is actually solve the problem?

While in Moab, I got to spend a few hours on the RS-1 and I have to say, the feel of the fork was incredible, once I dialed it in. Initially, I started at 120psi, then went all the way down to 80psi before felt like it should. Another nifty by-product of the design is that the seals are always lubed, since it’s inverted, keeping it nice and smooth.

The most noticeable difference I felt was cornering. The 32mm stanchions felt more than stable when tucking into rocky corners. If you did take a big hit, there’s a nifty little bottom-out bumper to soften the blow and protect the fork’s internals. Another feature is how well the fork locks out. The mandatory remote switch will add yet another doo-dad to your bars, but it’s worth it.

So, this RS-1 must be made from angel farts and unicorn horn or something, right? Well, there are a few qualms: the technology is reliant on a new hub, that means you’ll lace a new wheel. And at the moment, Rock Shox isn’t opening the hub platform to other manufacturers, which means your rasta PAUL, purple King or pink Industry Nine won’t have a matching front – This opens a can of worms when it comes to professional racers who need to be riding their sponsor’s wheels… Maviiiiic

Then, what about those exposed stanchions? Well, just be sure you’re mindful of your lines. If you do clip a rock, or a rock “clips you”, like all Rock Shox products, they are serviceable. I didn’t run into any issues during the ride in Moab, and it’s probably safe to say you wouldn’t either on your home trails. Just don’t wreck in that rock garden, bro.

Overall, I liked the fork – I like the look, I like the concept and I like the execution. People complain that it’s a couple grams heavier than the other XC racing fork, but I don’t really care about weight. For me, the feel is most important and the RS-1 feels damn good.

I don’t want to bore you with technical jaw flapping, there’s plenty of it over at Rock Shox, I just wanted to say that I’m eager to try out this fork on my home turf… 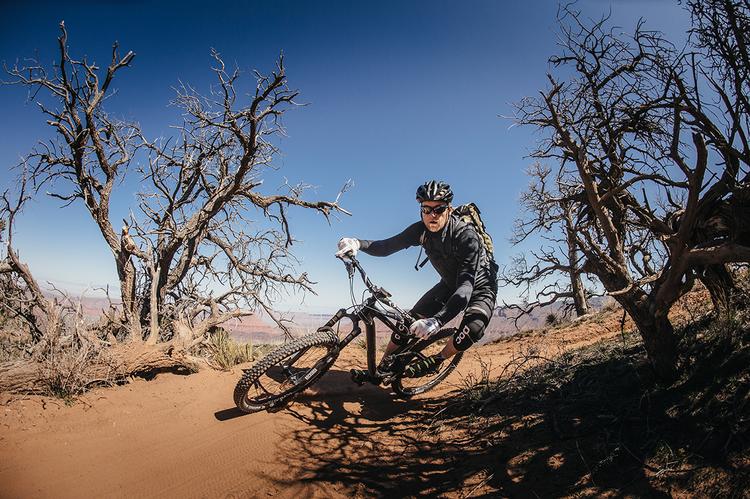 New found confidence? Or just summoning the Necronomicog? Finally, some photos of me riding gear in a review!

I think this goes without saying, but I’d like to thank everyone involved with last weekend’s trip, including Margus and Adrian for shooting such rad photos of the riding. One of the reasons why we were there was to test out the new Guide Brakes from SRAM.

I’ll be pretty honest here, I have never really liked Avid brakes. My bikes all have Shimano systems on them, from SLX to XTR. In the past, I’ve said that I’d never ride anything else. Coming off a weekend like this, it’d be easy to say that SRAM put us in this rad location, threw new products at us and expected some positive feedback but that wasn’t the case at all. They really were interested in what we thought and were open to critique.

Unfortunately, the only feedback I had to offer up was: “I didn’t even have to think about the brakes”. Period. Riding new terrain, on a new bike, the last thing you want to do is worry about if your brakes are going to feel good and perform up to par. They felt so amazing, even compared to XTR.

We all know I’m not a king of technical garble, but I think it’s safe to say that these exceeded mine and everyone else’s expectations. I didn’t hear a single squeal from the rotor, or person the whole trip. 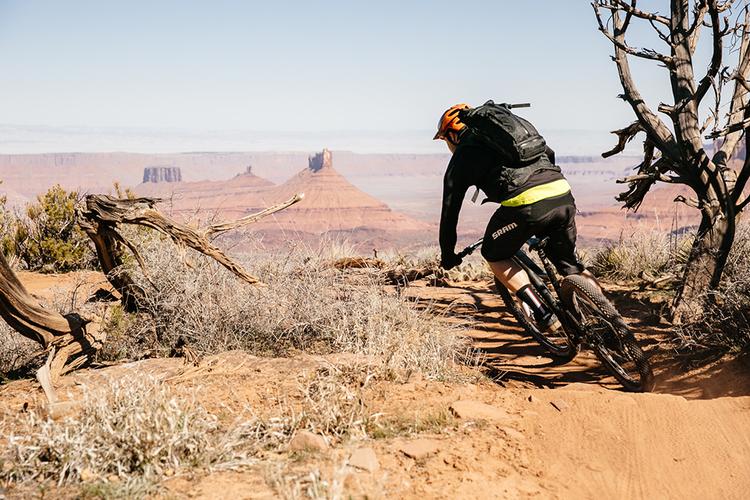 Everyone, in the history of friends who’ve been to Utah, particularly Moab, have said “broooo, you have to ride Porcupine” – which is followed by Enchilada – “ohhhh man, you gotta do Enchilada too!”

Let me just say that Utah is completely wild. It’s like a hipper Nevada. The word “Adventure” is literally everywhere you look – Adventure Raft Tours, Adventure Desert Guide, etc – I could have done a post on the vernacular of adventure x companies. Next time.

Back to Utah – I’ve been here once before.

Moab, however is a lot different than I expected. The trails are incredible and yes, Porcupine did indeed deliver. If you’ve ridden it, then you know. If you haven’t… broooo. The morning began with a quick cup of coffee and a breakfast burrito. Then came the sunblock lather, kit check and bag-stuffing. Snacks, water, tools, camera, check. In the interest of time, we shuttled to 7,000′ and ripped back to town.

Part of the SRAM Trail House media launch experience is getting to have some talented photographers shoot photos of you ripping down the mountains. To give you a point of reference: we stopped about every 10 minutes or so and went down the trail one by one. That results in a very long day – but for me, it just means I got to shoot my own photos in the downtime, some of which, I’m very stoked on.

Photographing MTB riding is pretty new for me, but I think this photoset captures what it’s like to ride in Moab, particularly Porcupine. At least in a pretty ok manner. What I’m saying is, I’m stoked on a lot of these, so don’t miss ’em! 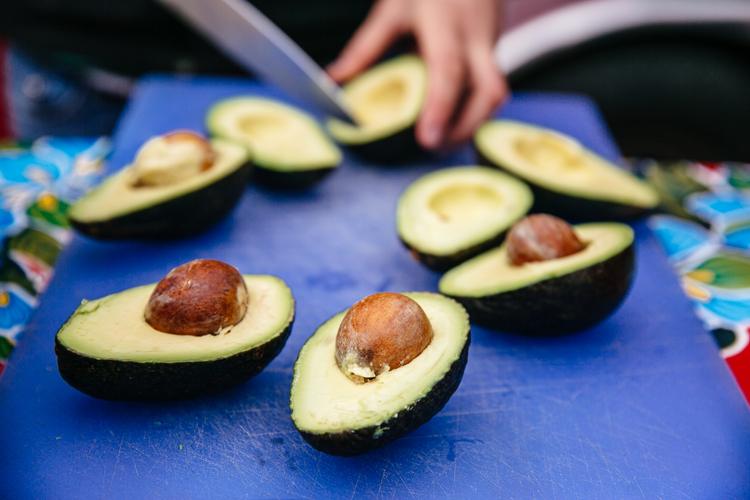 Unlike the first day of the SRAM Trail House media event, today I opted for a 35mm point and shoot in a hip bag, instead of my 5D in a hydration pack. That means, no photos just yet, but because I’m never without camera, I did get a few photos of food and landscapes – people like that right? No bike photos today!

We’re about to head out to hit Porcupine, a Moab favorite and I can’t wait. As always, more to come… 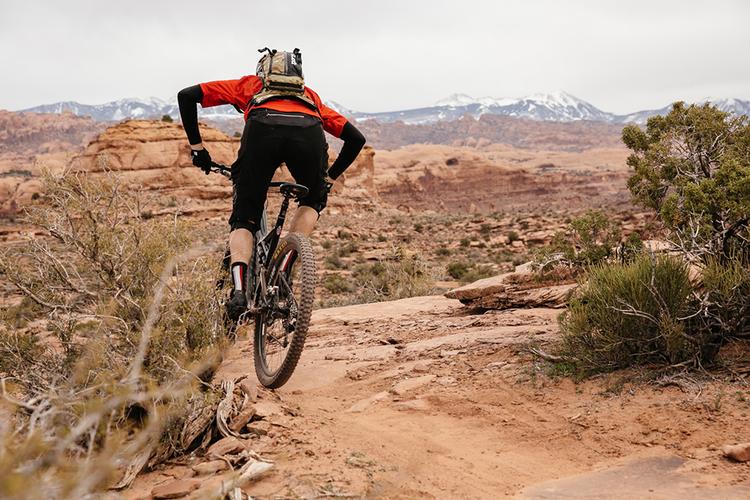 Over the past four years, SRAM MTB has invited a handful of media representatives out to Moab, Utah to unveil new products, talk tech and most importantly shred the abundance of trails just a few short miles from town. Getting an invite to an event like this is as exciting as it is unnerving. Dude, you have to like, ride new stuff with like 20 people. Most of which you just met that morning…

The trails in Moab are unlike anything I’ve ridden before. Some are infamously techy, then others envelop you in smooth, flowy 1-track ribbons. Today, we hit the HyMasa – Captain Ahab loop and I had an absolute blast. Once you get over the whole new bike / new trail / new terrain and just embrace your surroundings, the anxiety subsides and with each break you take, it’s easy to fall into the environment. Or, in my case you OTB, get up, laugh and everyone is stoked. Then you all get to hang out as the sun sets over the cliffs.

See more of the weird Utah vernacular and mind-blowing landscape in the Gallery!