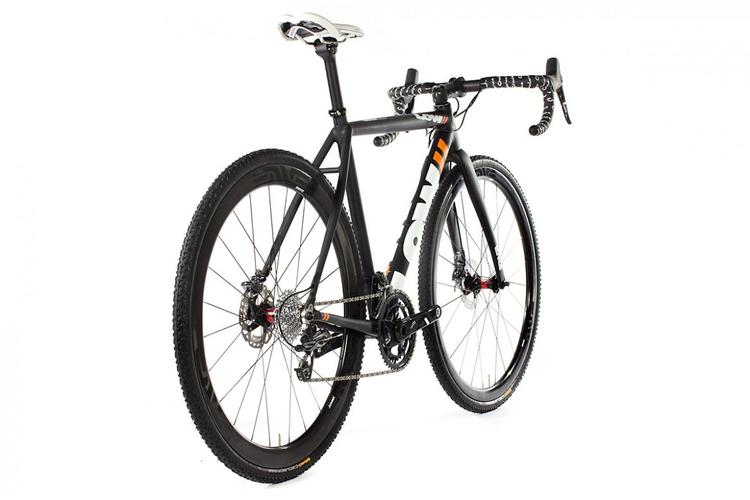 We’ve seen the Low CX bike evolve here at Radavist, so it should come as no surprise that this year’s CX offering is disc-equipped. The LOW CX Mkii is finally ready for pre-order, just in time for ‘cross season. It’s made in house at LOW in San Francisco from proprietary tubing, features internal routing, smooth welds and will clear a 40mm tire. Check out more at Low, read their PR below, pre-order a frame for $2,450 here and don’t miss the previous galleries over there on the left. 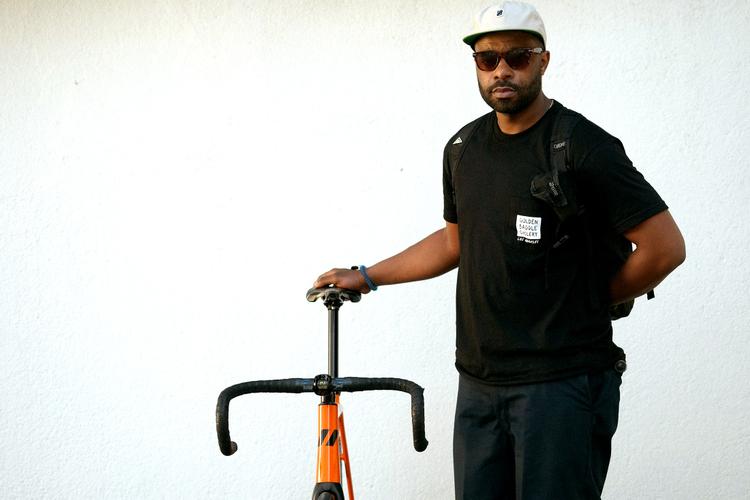 Massan has been around since the beginning of all this track bike shit. His fluid riding, effortlessly controlled hill bombs and huge Sugino Zen chainrings made his name a staple on bike forums and in bike shops long ago and his timeless style have earned him a lasting place in the bike industry as a whole. Unlike many of the early track bike videos, which are easily dated by old fixie tricks or bunny hops, Massan’s videos are only dated by the bike he is on. From the era of his blacked out Bianchi Pista Concept (remember the HUF bike?) to his time with Leader, his videos have always highlighted his effortless style and amazing bike control.

To say that Massan just rides is an understatement though. He never looks like he’s smashing, but he is. He never looks like he’s flying, but trust me, he is. Like many of the skateboarding greats, people have said Massan is boring to watch because he makes this shit look too damn easy. There’s never been a hill he wouldn’t drop or a gap he wouldn’t shoot. Massan’s calm/cool demeanor translates well to the bike, making him one of the most graceful cyclists on a track bike.

Years ago I was visiting San Francisco and made plans to hangout with Massan. Usually we spend our time talking about cassette tapes, hip-hop and b&w photography, but on that day I needed to swing by Andrew Low’s place to say hi and asked Massan if he wanted to come along. Andrew makes exactly the kind of bicycles that Massan likes to ride – oversized aluminum tubes, aggressive geometry and fast as hell! And it doesn’t hurt that they’re made in the city that he came from. The rest, as they say, is history. Andrew and Massan have been working together since that day and this bike is their latest collaboration.

Massan’s new Low is the SS Crit, the first production track bike designed specifically for the track bike criteriums happening these days. The first thing that comes to mind when I see this bike is the San Francisco Giants! I’m not sure if that was Massan’s intention, but what better way to show San Francisco pride than to paint your bike Giant’s orange. This build has Massan written all over it with the massive Sugino Zen chainring, Thomson post and stem, Vittoria rubber, Phil Woods and of course some HED Belgium Blacks! 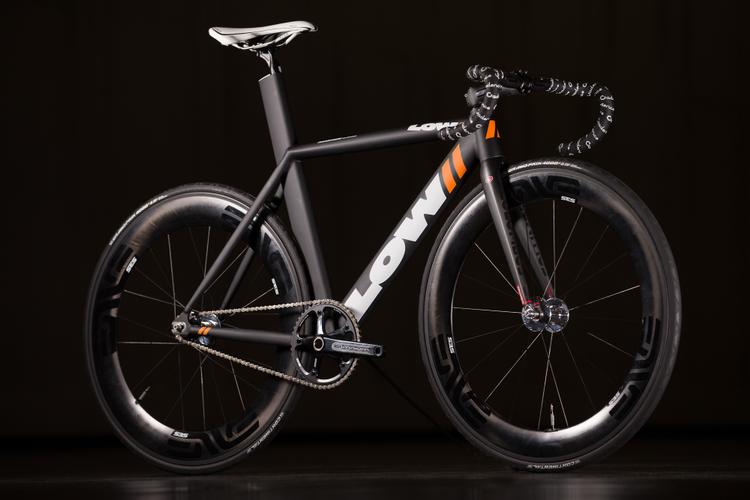 What can I possibly say about LOW‘s track bikes that hasn’t already been said? They’re sleek, made in San Francisco race machines with plenty of both street and track experience, a clean profile and killer, almost race car-inspired graphics. Hell, even as I’m typing this, you’ve probably already moved onto the photos! 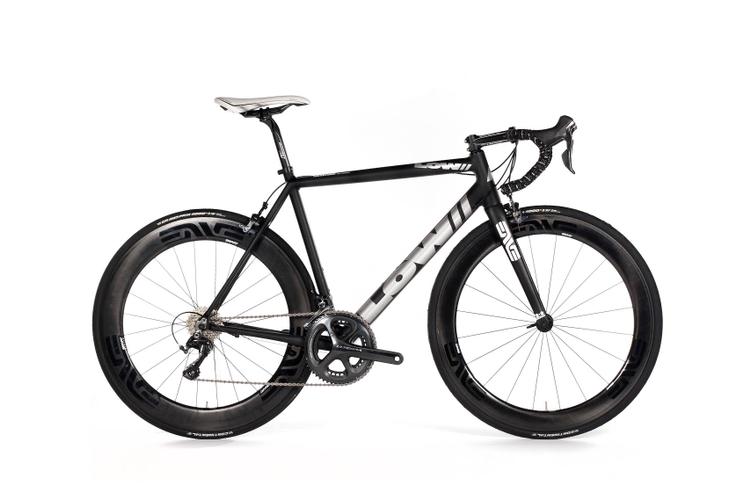 LOW Bicycles in SF is doing something a little different to raise money for their new racing team. Check out all the details below!

“Andrew started Low Bicycles, a small manufacturer of high quality, handmade aluminum racing frames, located in San Francisco, CA in 2010. Hear about his history, his take on aluminum, and questions from the crowd. Introduction by Dustin Klein, of Cadence Collection.” 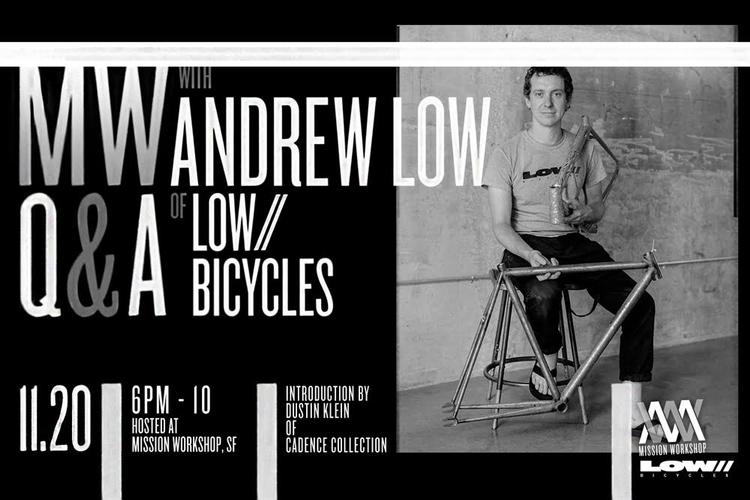 Andrew started Low Bicycles, a small manufacturer of high quality, handmade aluminum racing frames, located in San Francisco, CA in 2010. Hear about his history, his take on aluminum, and questions from the crowd. Introduction by Dustin Klein, of Cadence Collection.

Hit up RSVP@missionworkshop.com for entry.

San Francisco’s Low Bicycles is finally hitting full-on production on their aluminum MK1 road frames. Each frame is made by hand in SF and is available in three color options: orange paint with black decals, black paint with raw decals and black paint with orange decals.

As an introductory offer, Andrew is selling the first 20 frames at a 20% discount – that’s $1,600 for a frame. If you’re looking for a new road frame, you should check these frames out. See more at Low Bicycles.

Marc, his Low and the new Giro Empire ACC Reflective shoes take to the streets of NYC and the Red Hook Crit… coming this fall. 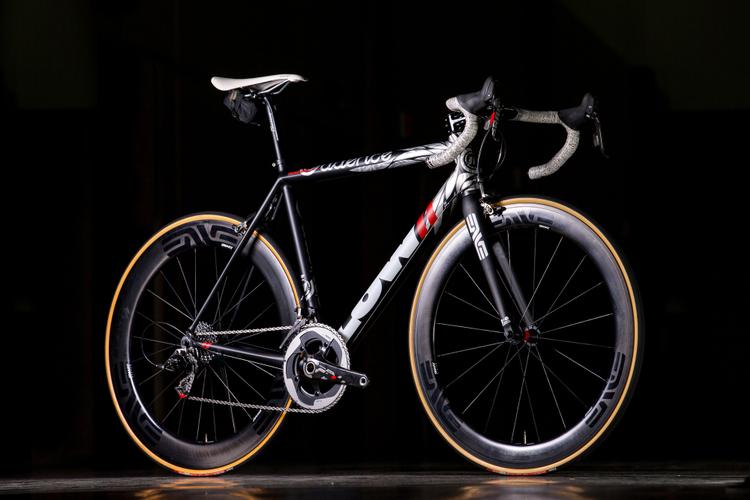 Now in stock, in limited numbers at Low Bicycles, the Mk1 Road Cadence Collection. As seen in our 2015 NAHBS coverage.

The Low Bicycles collaboration with Cadence Collection was inevitable. Both brands have supported grassroots racing in the Bay Area consistently over the years. This project was born out of an ongoing kinship between Dustin Klein and Andrew Low, as they both developed a following in the tight-knit messenger and alley-cat racing community. Both brands share an individualistic and creative mindset with an attitude and design philosophy that is informed by their mutual background.

Steve works for Bicycle Coffee in SF and is a good dude, which is why I’m excited to see him riding for a great builder like Low Bicycles. Congrats to all parties involved.

This one’s hot off the DFL race in SF last weekend, from Andrew Low himself:

“We’re taking pre- orders now at my website. Production will begin right after the end of the season – after the frame has been adequately tested, when I am satisfied there are no issues with it, and when all my current standing orders are fulfilled (about 4 months from now).

In case anybody is wondering why we’re testing it so late in the season it’s because of my broken wrist this summer, I was out of commission for 3 months. Also, we plan to build her up with fancier parts, but this is the best we could do on short notice.”