That’s where our story begins. Commercial photography is a side-hustle and rarely does it trickle over here to the website. I like to keep them separate. Unless, of course, there’s a story to tell both visually and in this case, geologically. Cari and I scouted this zone back in December, exploring the myriad of interconnecting dirt roads, many of which ending abruptly at sheer cliffs, while others creating massive loops, primed for cycling.

Commercial photography rarely exists within the zone of what you and I would consider a bike ride. While the end game on a bike ride is the journey itself, on a shoot, it’s the photo. That’s the dichotomy of doing what I do. I almost always ride with a camera and will shoot all day, regardless of light. On a shoot, however, the focus is light and unfortunately, there’s a small window of opportunity. Unless, of course, there’s an inversion layer, which allows for ideal light all day. That’s a photographer’s dream and we must have done something to appease the desert gods that day because that’s what we had on our first day. At 1,800′ in elevation, the Pinnacles are hardly considered the “high desert,” especially with the Panamint mountains being right there, neighboring Butte Valley and even the outpost of Ballarat. All of which we’ll take a look at later, in a Radavist Road Trip post. I was immediately drawn to these tufa spires for photos. There’s something alien-like about the backdrop and since it’s BLM land, it’s a free-for-all zone as long as you follow the posted rules; stick to the roads, leave no trace and please, no bikes on the hiking trails. Dirt roads though, those were fair game. 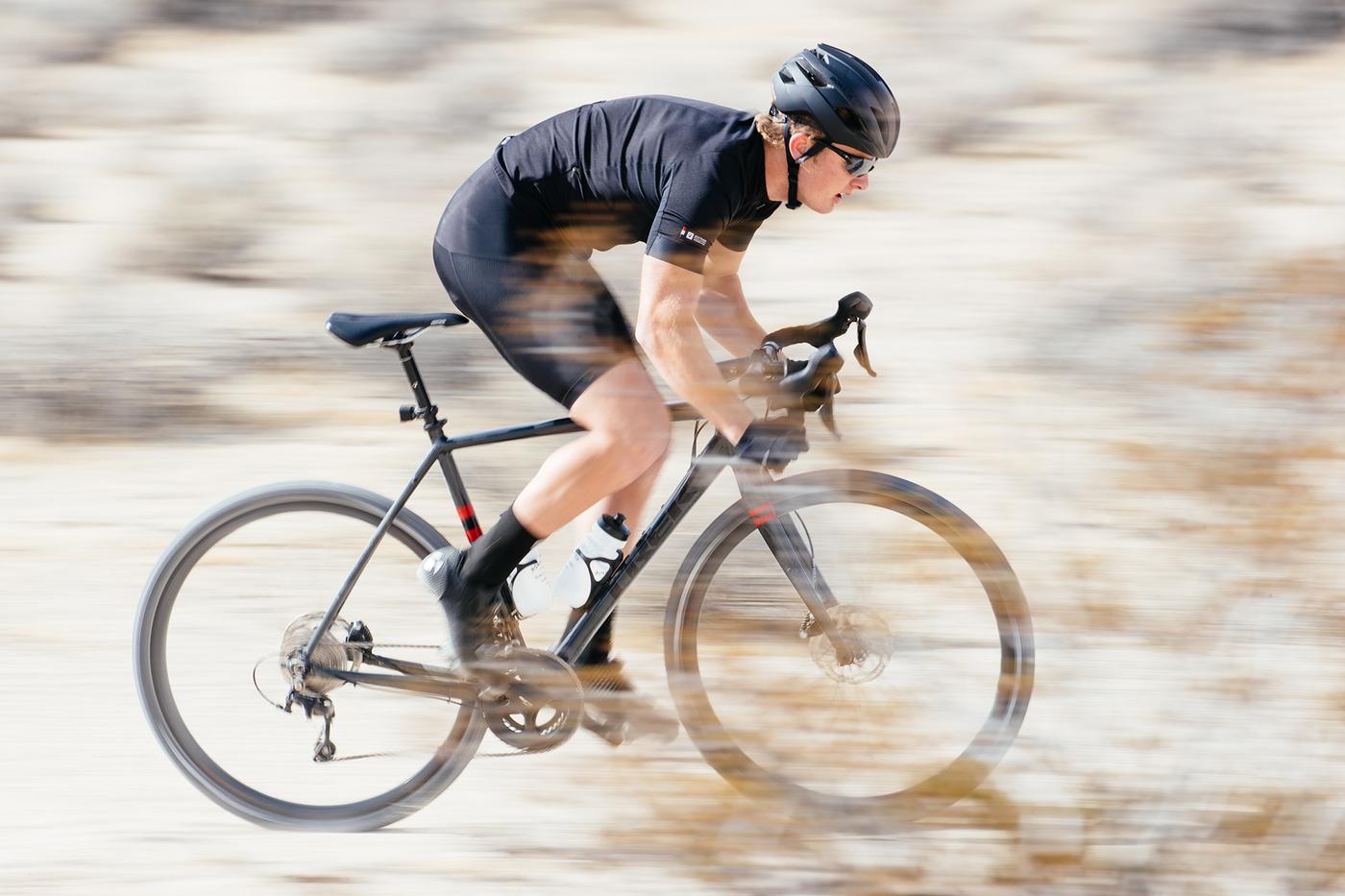 From sunrise to sunset, we hammered through the shot list, taking extra time to do the thing we do best: play. Spencer’s bike handling made everything easy, allowing for extra time to experiment with a 14mm prime lens. Zooooom. Road bikes have gotten the back seat for me as of late, so it was fun visiting the concept of speed with the new Aeolus XXX wheels on a crazy Trek Madone 9. The road just past Trona is made from a local cinder pumice, resulting in a snaking, bright red datum intersecting the Mojave sage and scrub brush. Since first visiting this zone, I knew one day I’d have the opportunity to photograph this iconic stretch of road, with the Panamint mountains as the backdrop. Zooming through this stretch of road, like an F-18 Hornet from Edwards AFB, Spencer transitioned from shreddy off-road to speedy on-road. Unlike the day before, we had ample direct sunlight, so when it shifted to high noon, we drove into the Panamint Resort in Death Valley for lunch, then to the Charcoal Kilns in Wildrose on Telescope Peak, where we found a massive amount of fresh snow, that had been dumped on this zone the night before. It was wild! As the sun dropped across the Panamint Valley, we hauled ass across the region in hopes of hitting one last stretch of road for some of that “Big Country” vistas Trek and Bontrager had expressed an interest in. 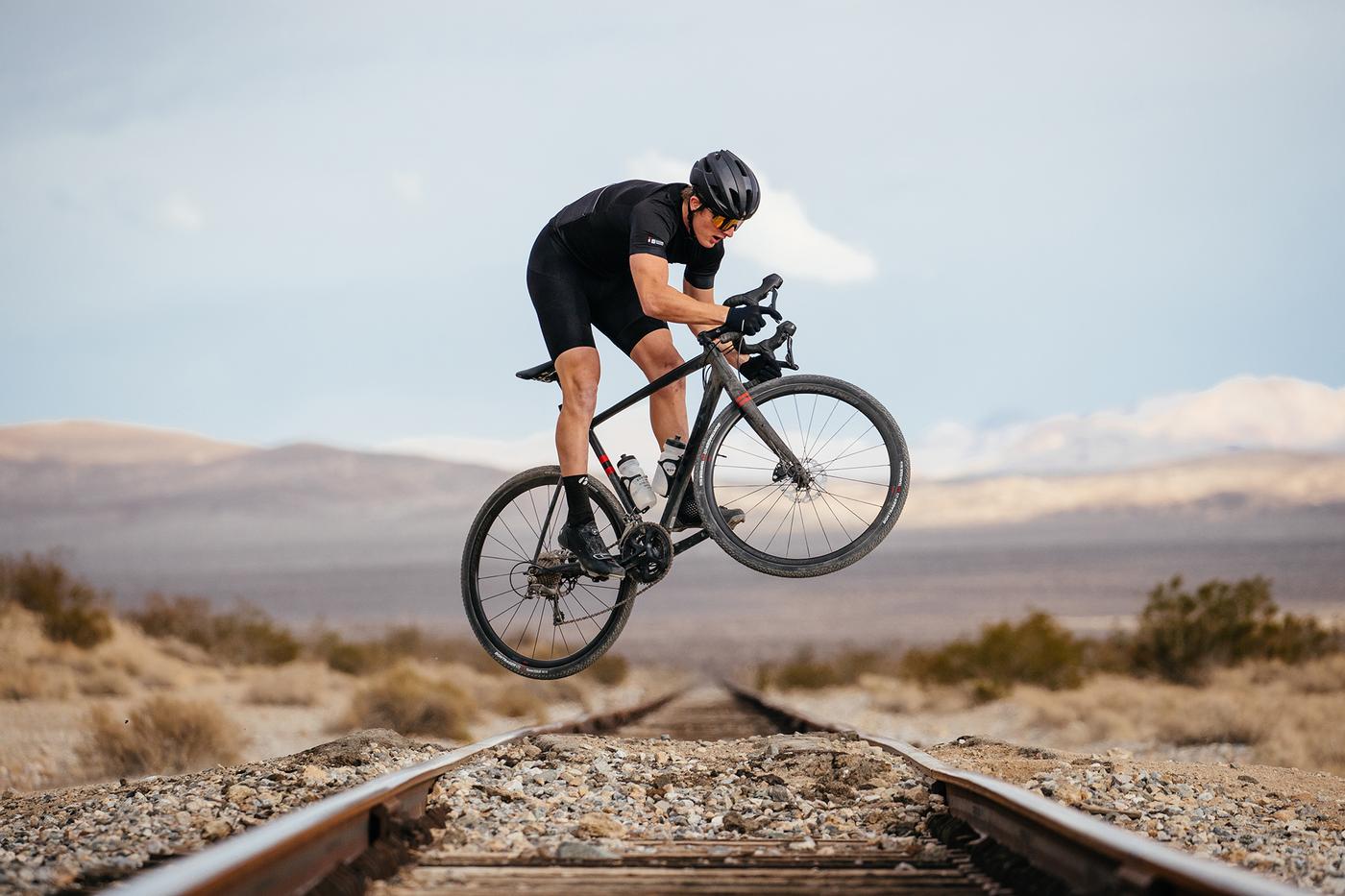 Routes. They’re easy in this zone and apps like Strava or Ride With GPS make it easy for you to plan out a loop or a point to point ride. Take on as much as you’d like, be it fast-paced speed fests or slow-rollin’ tours. These two zones provide miles upon miles of plentiful, desert recreation. Next time I’m back, I’ll probably still have a camera, but will be on the bike, instead of chasing one around in a 4×4.