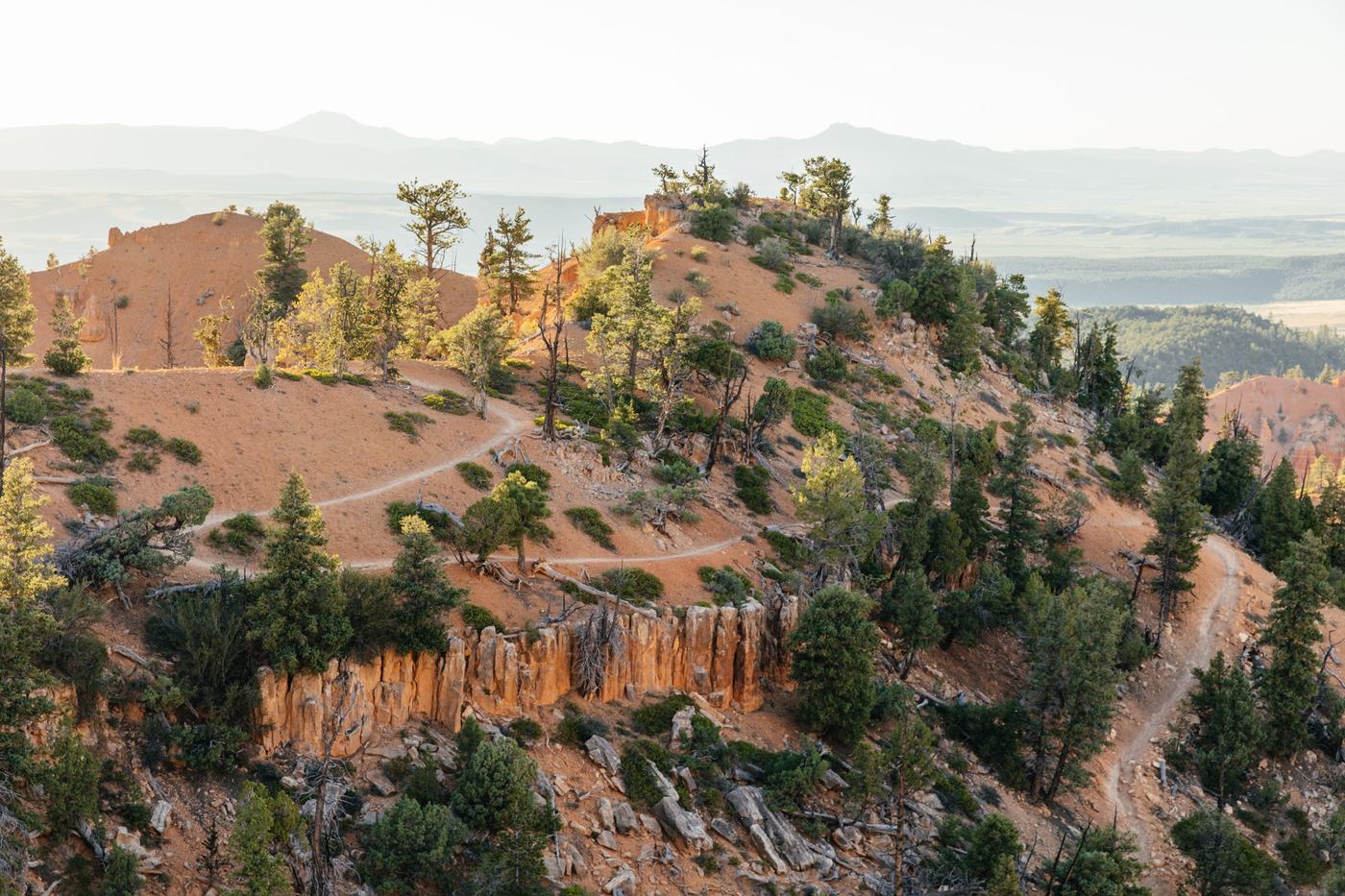 It has been studied and documented that cattle and other hooved mammals will almost always beat humans and even computers at finding the most efficient path around, across, through, down, and up various escarpments. Surely cattle have emotion, yet time after time, the cattle’s decisions seem to be void of emotive movements. Rather, their intention seems to be guided by essential staples: food, water, predator evasion, and shelter.

As humans, we recreate on trails. We exercise, we meditate, we photograph, we use these trails to align our mind and body into one. I’ve always wondered if a trail builder’s mental state ultimately affects how and if other users can somehow pick up on these emotional carvings later down the line of time. For instance, have you ever ridden a trail that is void of flow yet instead, it demands your utmost attention? Instead of moving around the mountain’s chunder, it attempts to tame it, encase it, and envelop it. Is this some sort of psychological attempt made by the trail’s maker to tackle not only the terrain but the very literal metaphor of life itself? i.e. are the builder’s own biases forever being marked on and in the earth? Or have you ridden a trail that is so flowy and symbiotic within the landscape that upon completion, you have gained a deeper knowledge of a place in time?

Mountain bikers describe trails in many ways yet I always like to think of trails as serving a larger purpose. Are you the same person you are upon completing a trail? Did you pick up on the residual harmony or horror while riding? It’s something to think about. At the top of the Grand Staircase – a geological formation spanning across the Colorado Plateau all the way to the Grand Canyon – is Bryce Canyon, a place known for its distinct Claron Formations, also known as Hoodoos. Over time Co2 combined with rain, creating carbonic acid and caused erosion. This rain eroded the limestone surrounding the siltstone, dolomite, and mudstone causing the crust to erode into plateaus, which then eroded into fins, and later these fins developed windows, until finally leaving these iconic hoodoos. This process took millions of years to reach the presentation we witness today when visiting Bryce. Look closely and you will see evidence and reminders that geologic time includes the present. Bryce Canyon and the northern region of the Colorado Plateau has been home to the Paiute since 1200 A.D. and before them, the Fremont and Anasazi (a weighted name with indigenous propaganda roots) since 200 A.D. Not much information is out there regarding the creation of Thunder Mountain. Sure the National Forest service made the trail, but did this area have previous navigation lines? What we do know is that indigenous peoples have long called this part of the Colorado Plateau home and it has great spiritual energy for the First Nations even today:

“Before there were humans, the Legend People, To-when-an-ung-wa, lived in that place. There were many of them. They were of many kinds – birds, animals, lizards, and such things, but they looked like people. They were not people. They had the power to make themselves look that way. For some reason the Legend People in that place were bad; they did something that was not good, perhaps a fight, perhaps some stole something….the tale is not clear at this point. Because they were bad, Coyote turned them all into rocks. You can see them in that place now all turned into rocks; some standing in rows, some sitting down, some holding onto others. You can see their faces, with paint on them just as they were before they became rocks. The name of that place is Angka-ku-wass-a-wits (red painted faces). This is the story the people tell.” – NPS 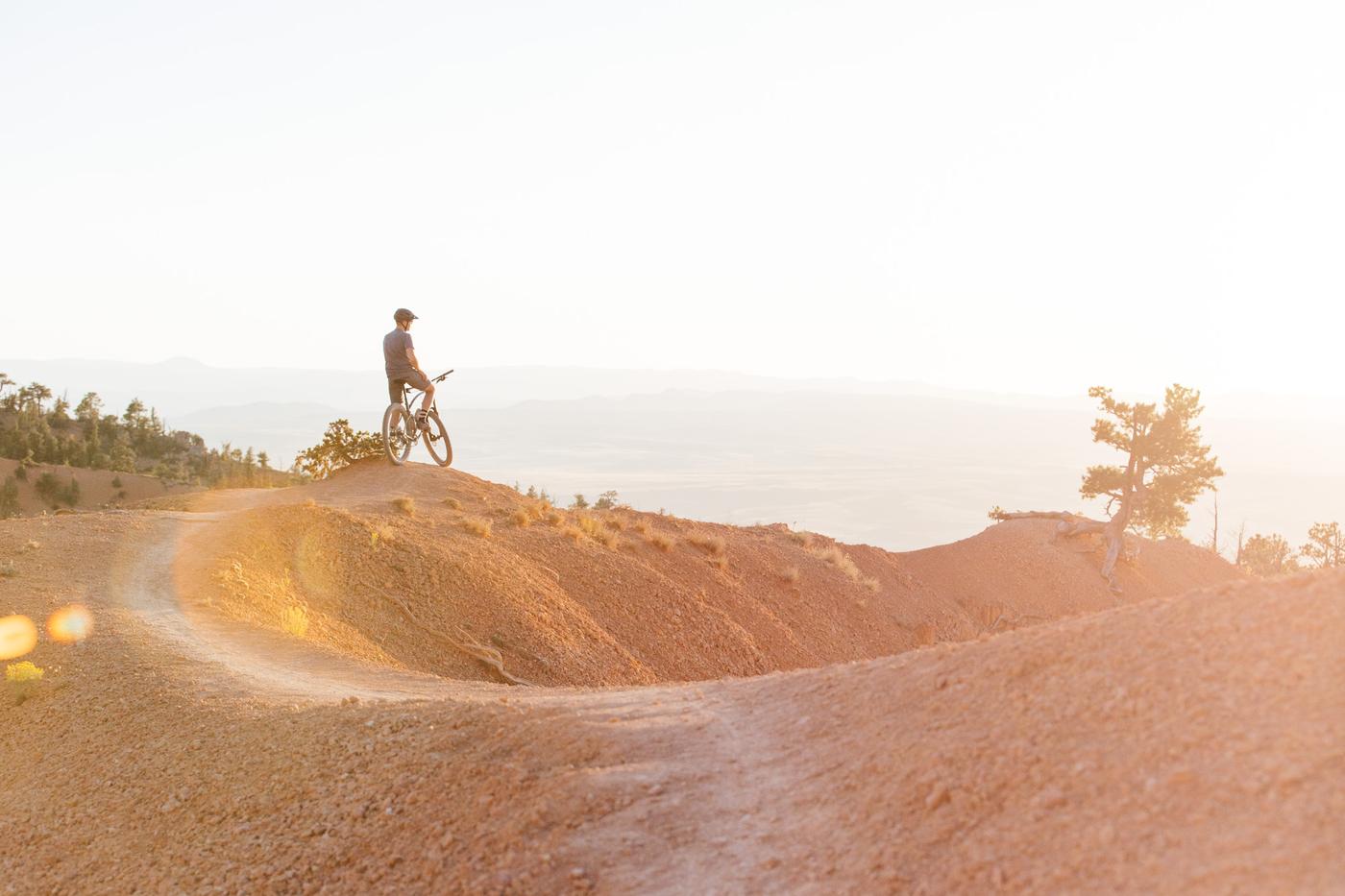 This part of Utah is like a three-dimensional, multi-layered jigsaw puzzle and unfortunately, due to its mineral richness, people are always attempting to remove pieces and plots in favor of extraction. For now, our recreation trumps (pardon the terminology) extraction profits but that’s not stopping the current administration’s attempts to greatly reduce the Grand Staircase-Escalante National Monument.

We’ve said this before, but it needs to be repeated: “the total revenue raised by the outdoor recreation industry usually outweighs the revenue raised by the extraction of oil and gas. In 2016, the outdoor recreation industry in the US brought in $370 BILLION dollars, more than twice the value of the oil and gas industry. Chew on that the next time a Senator says we need to chop up the desert in the search for oil.” 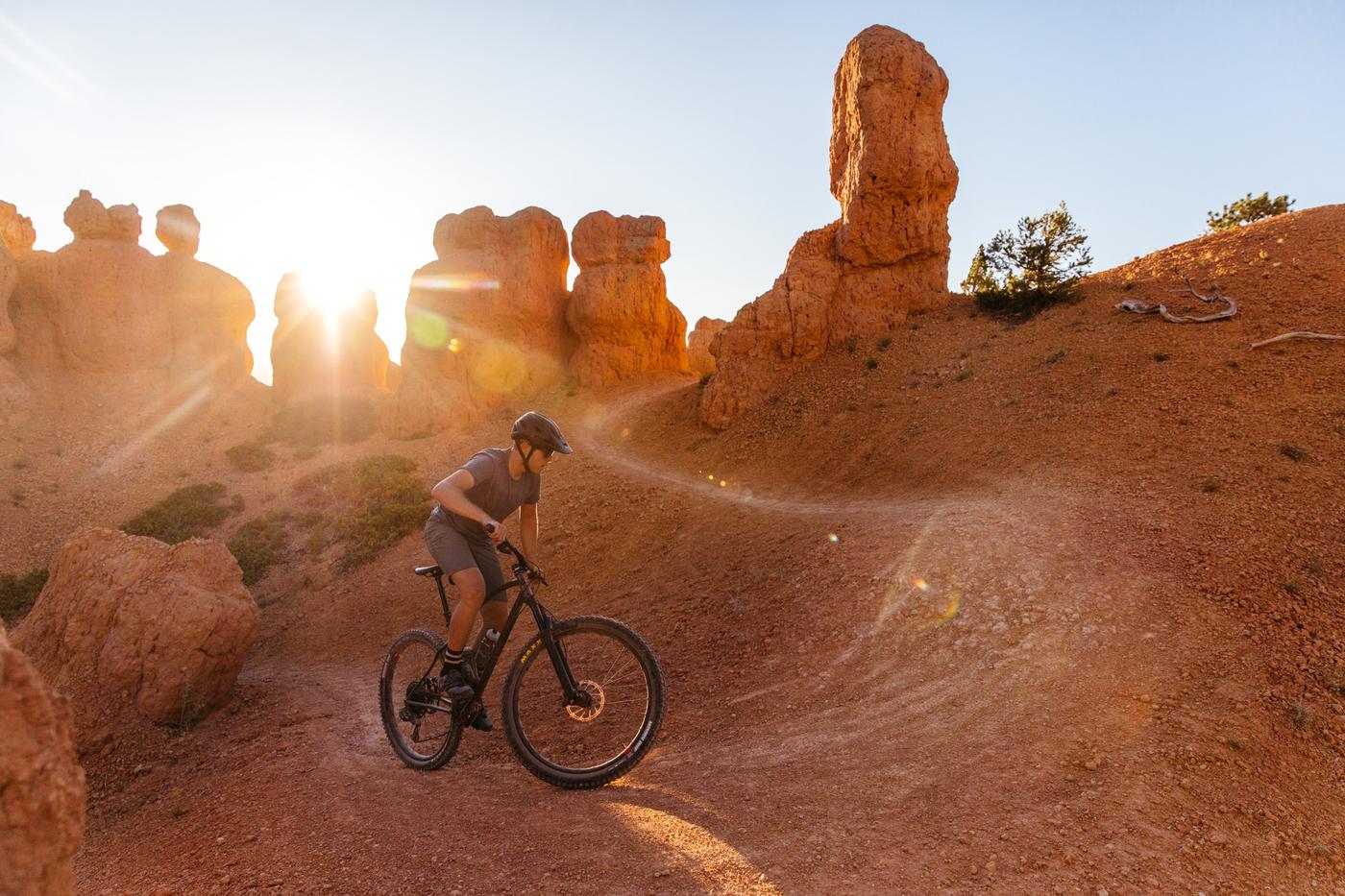 In a corridor that oftentimes resembles Disney Land more than wilderness due to the NPS tourist boom, Bryce National Park and its surrounding areas are promoted as foot-traffic only zones for various reasons, yet this trail, along with a few other remnants is a bastion for the human-powered, two-wheeled variety due to its location within a National Forest. In short, bikes are not allowed on trails in National Parks but most National Forest trails are ok!  The best part about Thunder Mountain is the Forest Service really takes you into the Claron Formations, rather than keeping them at a distance. You can shuttle to the singletrack, or park at the trailhead and do the 8-ish mile climb up to the start of the trail. From there, it meanders through pine-clad washes before presenting the result of millions of years of erosion to you. It’s unlike anything I’ve ridden before in Utah. We shuttled in the interest of time. Remember, this is a mixed-use trail, so leave the gravity bully mentality at home. Be nice, say hi, and remember, this trail carries emotional remnants. See if you can tune out from the buzz of modern technological dependencies and reset your frequencies to feel the harmonious energy along its meandering path. 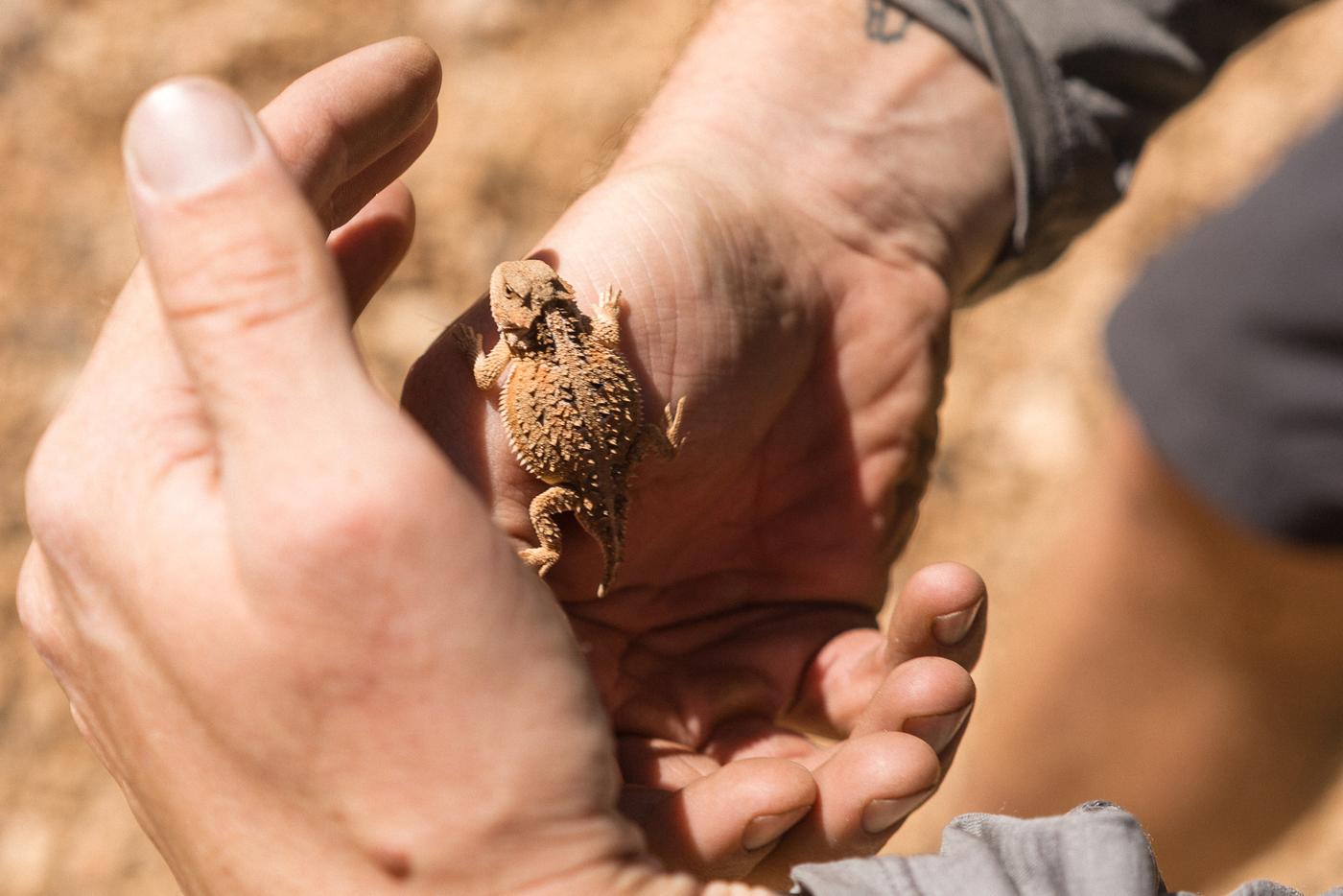 Thunder mountain is home to many species of reptiles, including the short-horned lizard – phrynosoma hernandesi. While riding the beginning of the trail, these little juveniles were darting all over. We came upon this one that had two red ants attached to its leg. Horned lizards eat black ants, not red ants. These particular red, or “fire” ants are invasive to the area, so I felt compelled to help this little plump lizard out. I removed the ants and set it loose to continue to fatten itself upon the native black ants. Now, over the years, I have shied away from picking up reptiles in photos – also known as herping. When I was in high school I had formal training by a herpetologist on how to handle wild reptiles and do not recommend you do so. Please, be respectful of wildlife. I’m only posting this photo to use it as a reminder that you are riding in wild animal’s habitats, so keep an eye out! 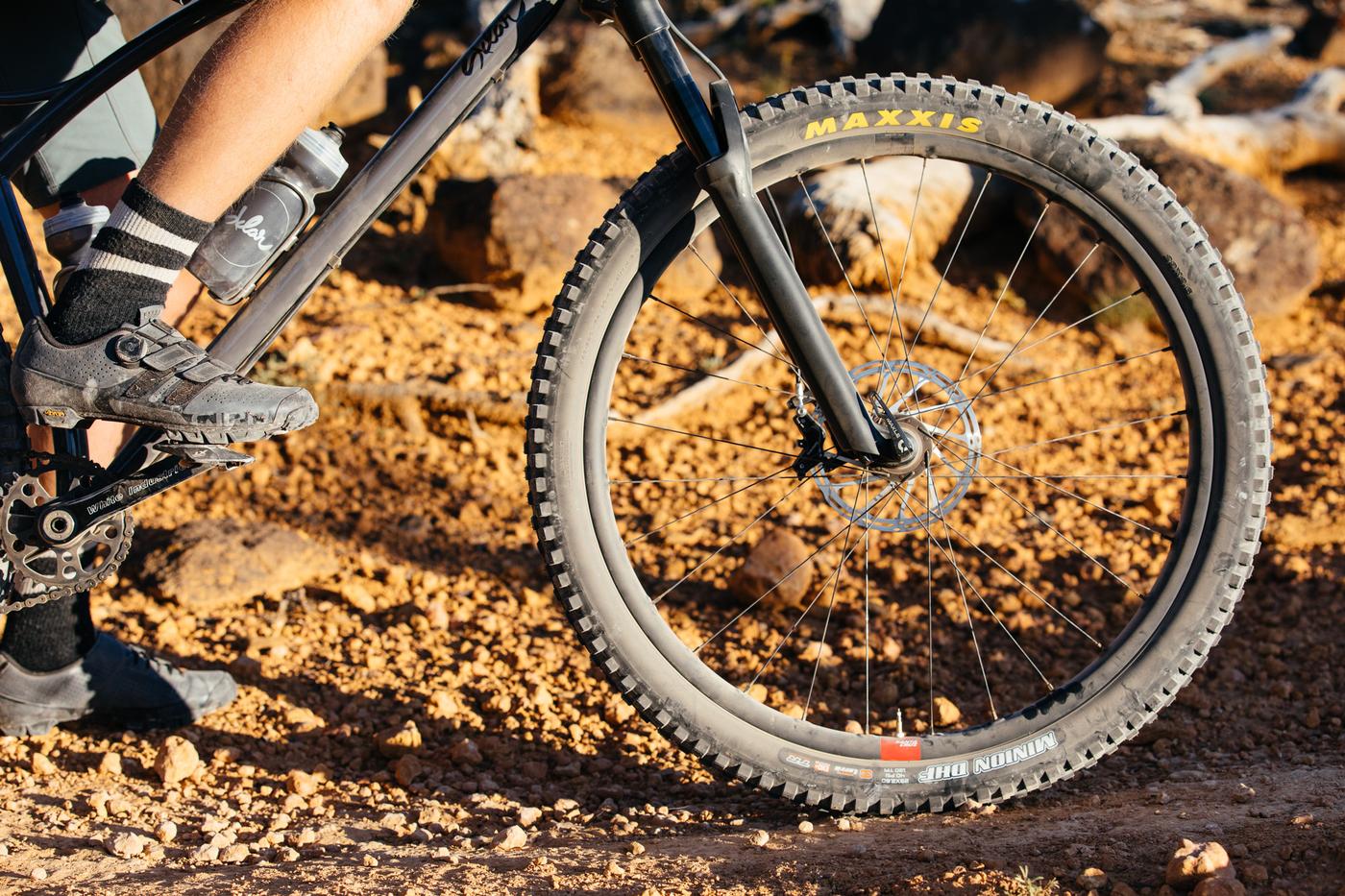 As I’ve brought to light in the past, my main hustle is this very website, which you’re now reading – thank you! – but I also moonlight as a commercial photographer for both endemic and non-endemic brands. Within the cycling industry, I’ve had a great professional and personal relationship with Santa Cruz Bicycles. Sometimes they ping me for photo work, which is the case here. They have these new 29er Reserve 37 wheels and needed some photos. With no direction and a minimal shot list, Adam from Sklar Bikes and I took to Thunder Mountain to see what we could get within a three-hour window, aka the golden hour.

Santa Cruz, like many wheel manufacturers, has embraced the small niche market of custom frame builders in the United States and beyond with their lifetime warranty Reserve wheels. Their latest model in particular really shows potential for the rowdy hardtail market. These wheels are designed around their 27.5″ Reserve 37 platform. Previously, the inner 37mm rim width package was not available for 29er wheels but with the growing popularity for long travel 29er bikes, Santa Cruz has developed a new design for their 29er wheel program. These rims are optimized for larger tires, think 2.5″ up to 3″. When you don’t have rear suspension, the bigger tire the better, in my opinion, and as the Reserve wheels tend to be less stiff, it makes the ride all the more comfortable, whether you’re tackling a psychotic array of mountain chunder, or a zen-like fast and harmoniuos trail like Thunder Mountain.

When brands give me complete control over a photo shoot, I tend to share it here on the website. To be clear Santa Cruz did not pay for this story, only a select few photos, for me it’s just an added bonus to be able to share this ride and hopefully encourage you to stop by if you’re on a road trip in the area.

Thunder Mountain is an moderate trail, with very few technical sections. The singletrack is about 7.5 miles with around 1,200′ in elevation. You can park at the western trailhead and ride up the bike path to the start of the singletrack, or shuttle it. The weather this time of year is pleasant and in the upper 70s. Not bad when you consider most of the Colorado Plateau is up in the 100º range. Please do not ride this trail if it has recently rained – it is monsoon season! – as the soil does not drain very fast.

If you’d like to see more information on the Reserve 37 29er wheels, head on over to Santa Cruz!