No, this isn’t a troll and yes, I’m aware of the polarizing nature of this particular topic of discussion but I can’t help but say I had a lot of fun making this short gallery.

As the editor, or owner, or whatever you want to call me, I tend to hold a certain sensitivity to topics here on the site. Or at least I am mindful of the Radavist’s impact on riding, even in the smallest of ways. E-bikes, for whatever reason, tend to generate a lot of flack and rightfully so. There’s the issue of trail stewardship, of accessibility, or perhaps it just looks wrong on paper. Or in this case, on screen. There have been tons of op-ed pieces circulated over the internet over the years, of all I have not read. Personally, I’m more of an experiential learner. I like to actually try something before putting my opinion down. Just a few weeks ago, I was finally able to truly use an e-bike. Not just in a cruise around a bike shop’s parking lot kinda way, but actually use one. 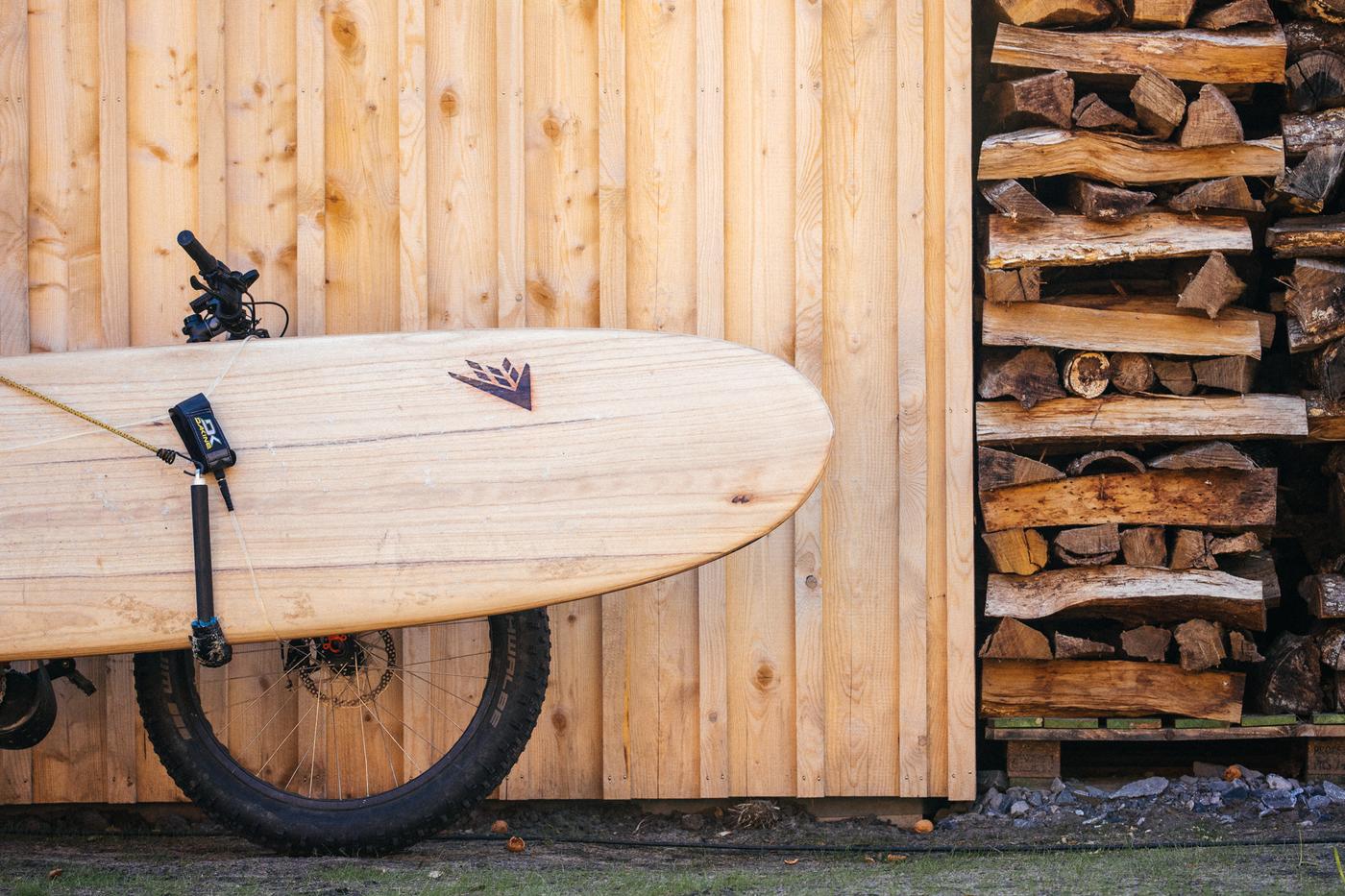 After Ranger Camp in Madrid, Blackburn Brand manager, Robin Sansom and I took off to the coast of France. Our destination was our friend Greg’s beach house in Capbreton, Aquitaine, France. Robin really wanted to surf at the local beach there and I just wanted a few days off work before heading to Scotland. Having grown up surfing in North Carolina (yes, we had really great surfing there!), It’d been a while since paddling out. Around 10 years if I recall correctly, so the idea of surfing intrigued me and also slightly terrified me. It’s hard to spend so much of your life dedicated to something, only to find yourself putting it on hold due to contextual obligations, and then be placed right back in the ideal setting once again. Would I suck? Possibly. Would it be fun? For sure. Paddling around in Coastal France seemed like a good way to spend a few days. Greg set us up with boards and with me a 4/5 suit, since the water was still chilly. Aquitaine is a beach break, so there are no rocks or reefs to worry about and the only fish of substantial size is harmless, regardless of its name “Seawolf.” Don’t Google that, it’s kind of terrifying. All this sounds pretty straight forward until Greg said: “so it’s a 20-minute walk to the beach and another 30-minute walk to the break, or we can ride the fatbikes.”

Sick! I exclaimed. Then Greg showed us the bikes. A local board shaper began importing e-bike kits from Taiwan a few years back. He retrofits these kits to the bikes and suddenly, with the help of a Moved by Bikes rack, you’ve got a very capable rig to ride not only to the beach, but on the beach. Robin was stoked. He and his wife had taken fatbikes to Baja, Mexico to do the same, but found the dry, deep, sand beaches rather arduous to navigate, especially with a 9’0″ long board hanging off the side, acting like a kite in the wind. 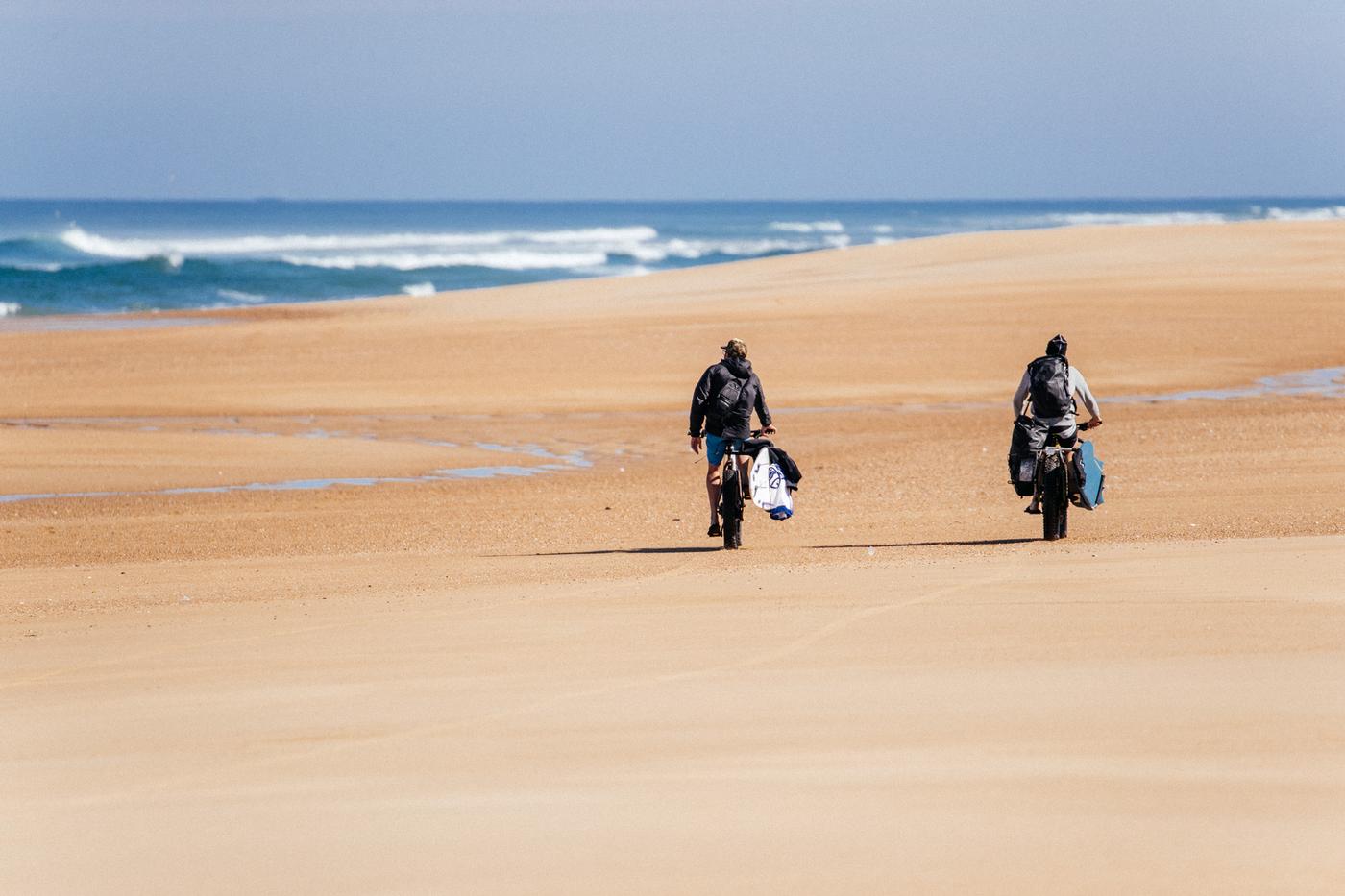 We loaded up the bikes and took off. Literally, like a rocket. These bikes were an electric assist, so depending on the number you selected, the motor aided in propulsion. When you quit pedaling, so did the motor, etc. Easy enough, until you hit the deep sand. Then it became a game of keeping the bike upright. Good luck with that, especially with a bracket and surfboard blocking your foot-down ability on the drive-side of the bike. Greg had a laugh at Robin’s and my efforts. 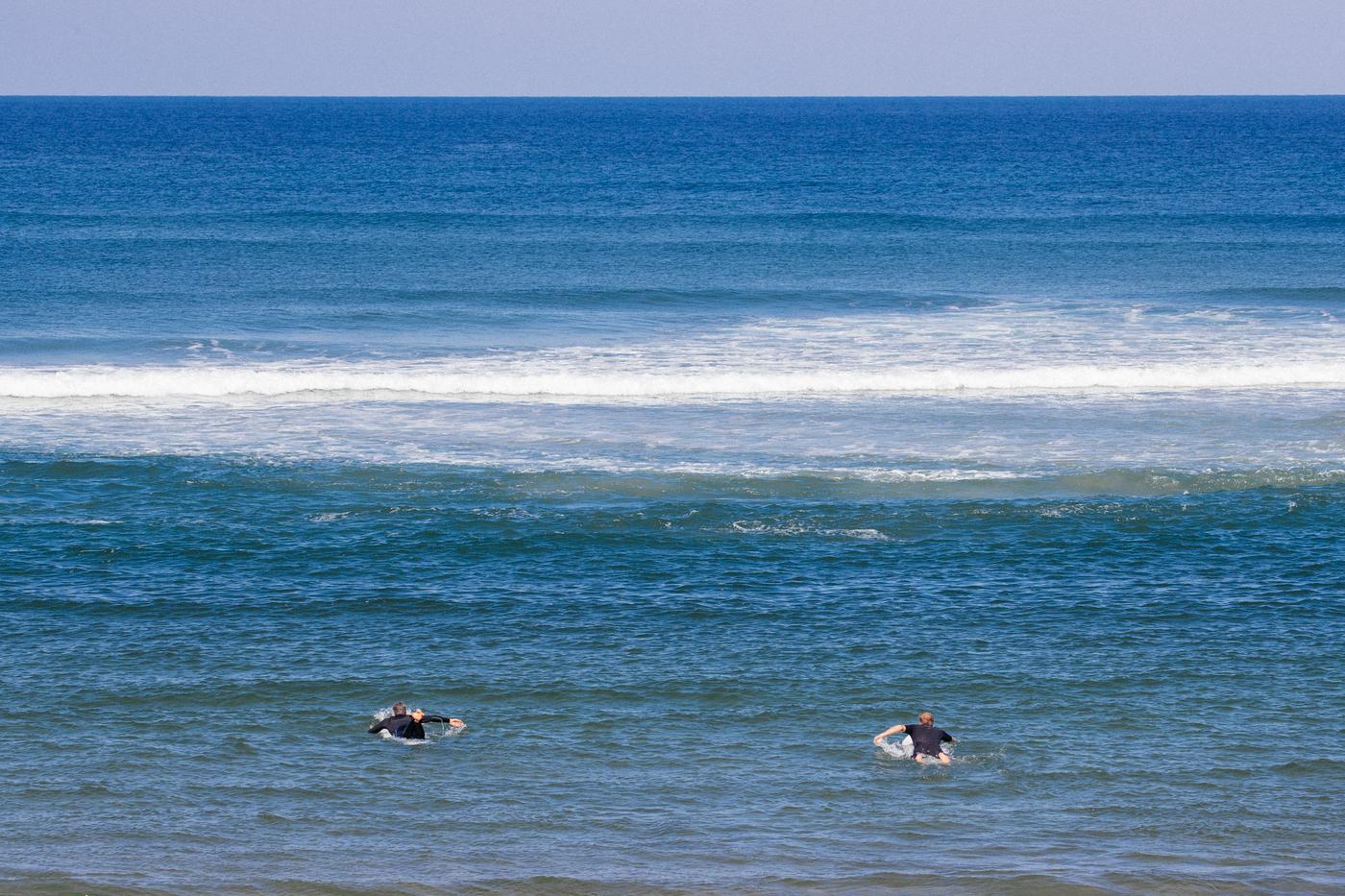 Once hitting the beach, we just let it rip up the coast to a local’s break. We had the water all to ourselves and surfed until the tide came in. Turns out, surfing is like riding a bike. It only took a wave or two for me to find my sea legs and all the years of surfing closeout shorebreak on a thruster meant popping up on a 9’0″ longboard was easy cheesy. Unfortunately, I didn’t get any photos of us riding the waves, but that’s mostly because this was a holiday and I didn’t want to leave the fun, even for a few minutes.

All in all, we had plenty of tales to tell over dinner and the next day Greg and I returned for more. I walked away from the situation with a true e-bike experience and while it shifted my opinion a bit, I can’t say I’m going to rush out and buy one. Using an e-bike to access the beach and find solitude might ruffle the feathers of some purests, but in this context and in that moment, it worked. 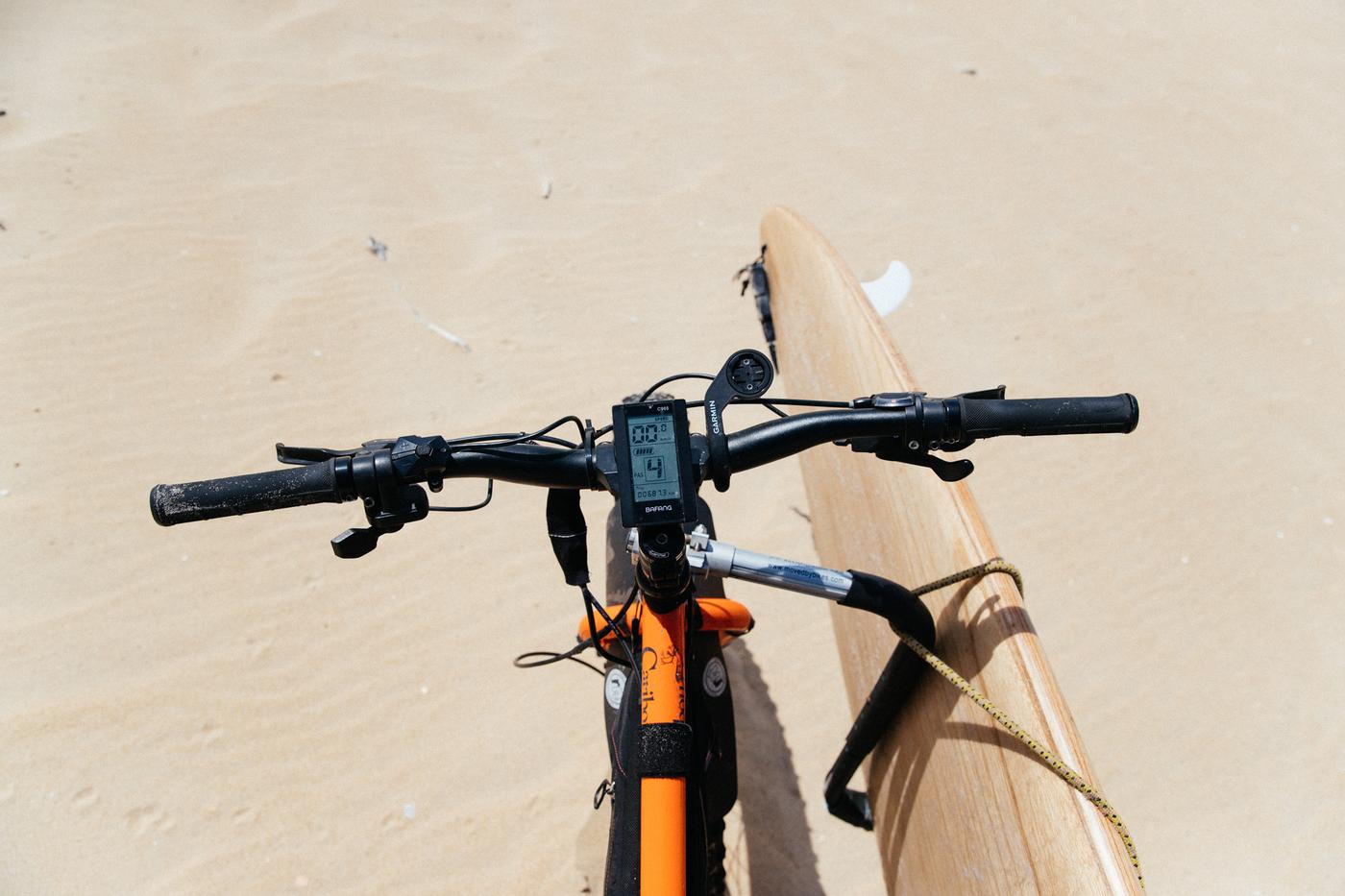 Now, I’m promptly going to leave this topic alone until the opportunity arises to again throw a leg over one of these devil machines.