It was in the back of my mind for about a year. Take a bicycle, load it up with camping gear and a surfboard, and tour every coastline around the world looking for waves. I figured it would be a trip of a lifetime. Get in shape, surf incredible waves, take photographs and pursue a dream I thought about every night before I went to sleep.

However, I had a problem. I knew nothing about bicycles. So I needed a warm-up trip. A trip to test my knowledge and see if I really wanted to pursue this idea. Before long, the California Coast was calling my name and I got my 15-year-old bike tuned in with surfboard and camping gear in tow.

Pedaling south from Eureka to San Clemente, I could have stayed on highway 101, but I wanted to follow every road possible within proximity to the ocean. Along the “Lost Coast,” I went up and down difficult roads that were nowhere close to the ocean. Nearly running out of water, I made it to the campground. I was greeted by migrating Grey Whales breaching 100 yards from shore. 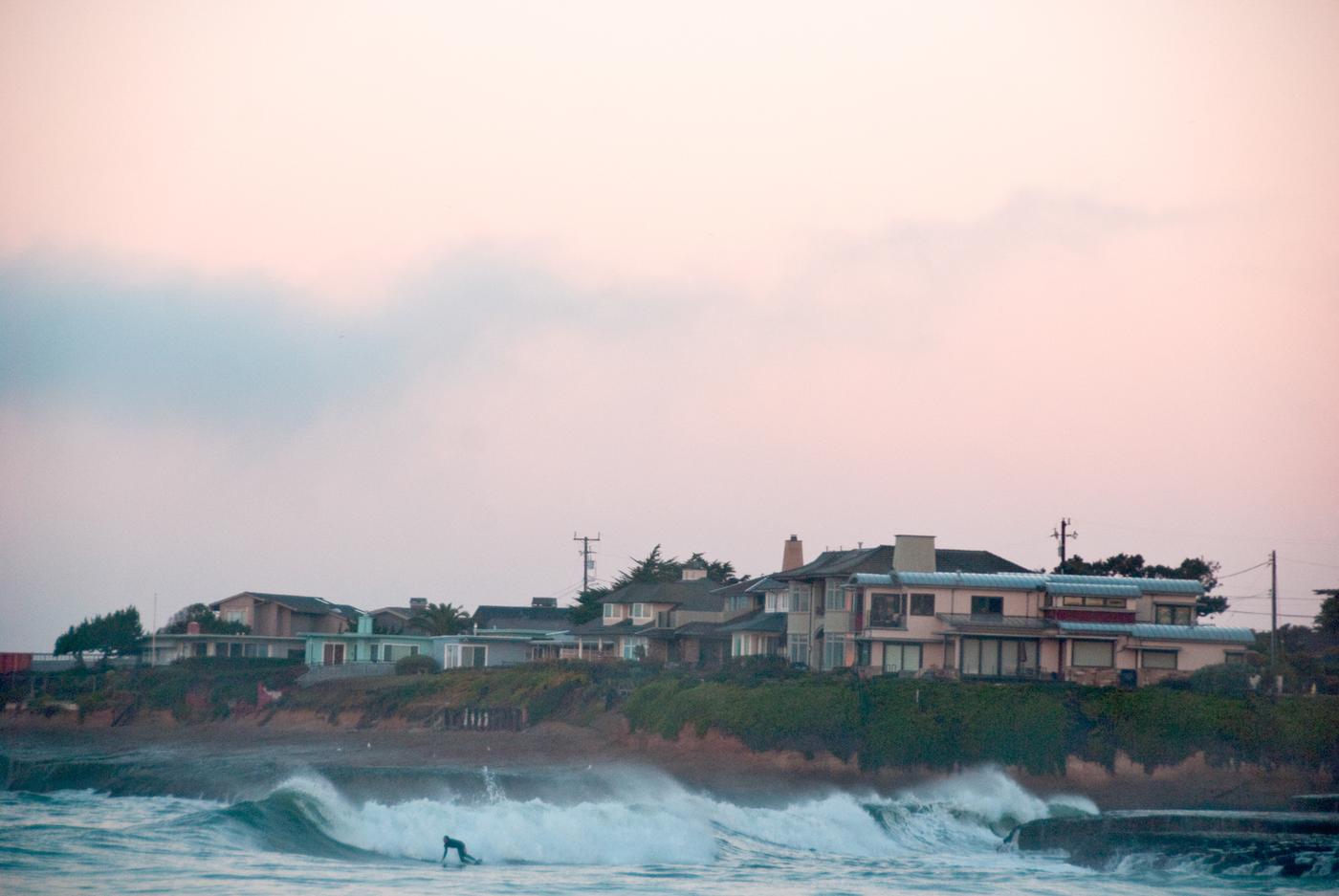 With cars, motorcycles, and motorhomes flying past me, I rode about 40 miles a day and tried to set up camp anywhere in a state park close to the ocean. Only doing 40 miles a day meant that I could have the afternoons or early mornings to surf without being exhausted at the end of the day. 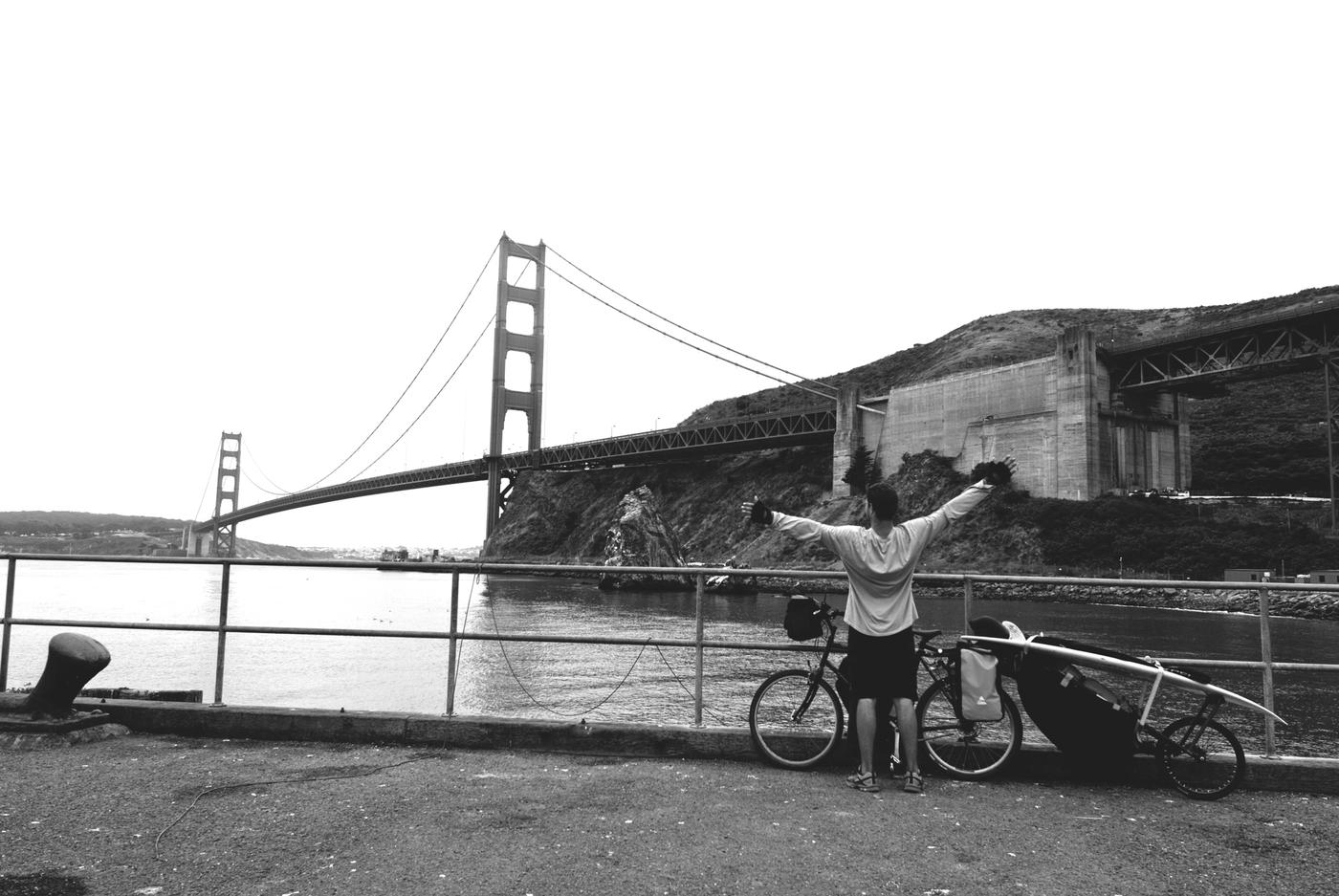 With this concept in mind, I made it down the coast to San Francisco. Along the Sonoma Coast, I got blown off of my bike and into the road. The wind was 60 knots and with me towing a trailer, it didn’t take much to knock me off of my bike. Luckily, there wasn’t a car. However, as soon as I picked myself up, a semi-truck came around the corner. Aside from that and a wild turkey scaring me at five in the morning, I made it to the Golden Gate Bridge and crossed on the 75th anniversary of its construction. Going down Geary Street and heading south towards Pacifica and into Half Moon Bay, I was greeted with swell. It was creepy because I was alone in the water and the area is notorious for having sharks. I had a fun surf without any damage to my body and continued south and into the popular surfing areas of Davenport and Santa Cruz. 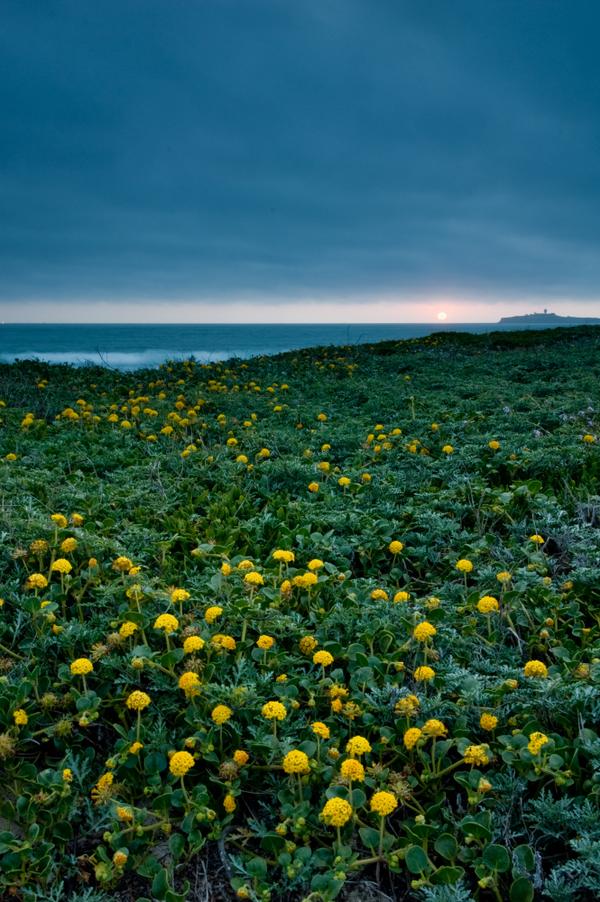 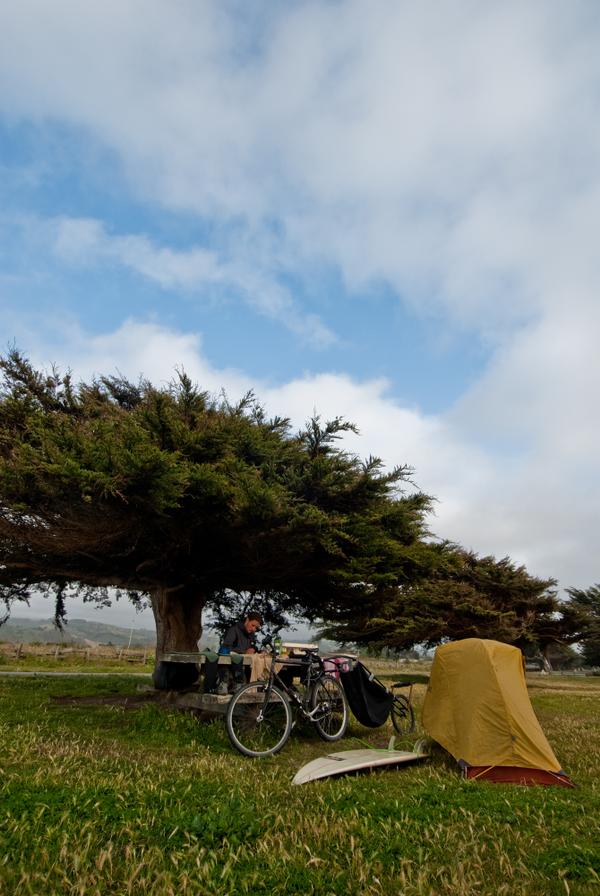 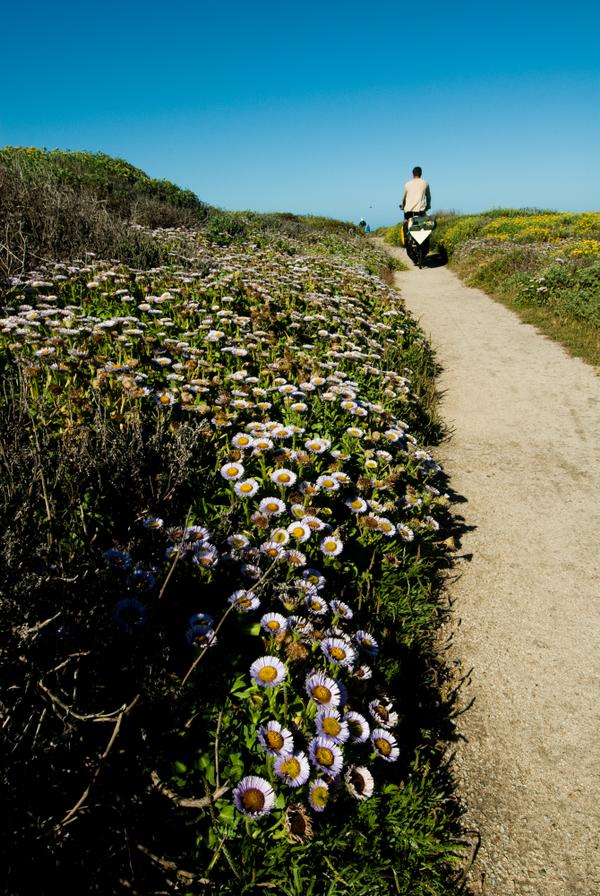 I stayed in Santa Cruz to recharge and surf until the sun went down. I had some really amazing sessions with friends and was able to sleep on a sofa, which was like a five-star resort after two weeks of camping. But the luxury needed to come to an end and I got my wheels rolling. I always knew Big Sur was gorgeous, but never stopped to take in the details. Not a lot of flat parts, but it didn’t matter. It was so pretty and the surf was fun, making it worth all the effort to get there.

Southward, I made it into Morro Bay. This stretch wasn’t the most difficult, but was the hottest. I had a friend in town that let me stay and take a shower. But I was now heading into Southern California where I began tasting home. Where the water was warmer and the weather sunny. I made it to Santa Barbara where I timed another swell. Only stayed a day for I had another friend in Ventura that allowed me to stay on his sofa. Another relaxing and fun retreat from camping. My much needed, but final stop, was crashing at a friend’s place until I hit my parent’s house 100 miles south. Continuing on and reaching Malibu, the Ferraris and BMWs flying by were a new danger. But once I got through, there was an 18-mile boardwalk along the beach from Venice Beach to Palos Verdes. A safe passage that was away from traffic and surrounded by the social life of tourists, locals, and wheeled enthusiasts. Unfortunately, there weren’t any campgrounds from here to home so I was therefore forced into a hotel. I woke up that morning and began the hell that is Long Beach. Riding through, I knew that I only had one more night of the trip before I was home. Going through the neighborhoods of Los Angeles, I couldn’t help but recognize the differences that are in this state. I started in Humboldt where the redwood trees meet the sea, and am ending in Orange County, a metropolis of overpriced coffee shops and multi-million dollar homes. Arriving at my hotel in Seal Beach, I sat in my room and stared at the ceiling with a sense of sadness.

I didn’t sleep much that evening and woke early in hopes of beating the traffic of Huntington Beach. Peddling with a sense of urgency and desire to get home, I raced through to Laguna Beach and Dana Point. On an overlook, I could see my hometown of San Clemente. I thought earlier in the trip that the scariest part was going through the windy section of Sonoma County. I rescind that comment now for the closest I came to dying on the trip was in my hometown, a mile from my parent’s house. I could taste home when a guy in a brand new Mercedes Benz flew by me and his mirror hit my arm, almost throwing me under his car.

I reached the top of my parent’s street and stopped. Smiling from ear to ear I began cruising down the street where I was to pull into my parents’ driveway and throw my bike down. I didn’t care anymore, I made it! I couldn’t believe that I did it and did it without getting injured. A month and thirteen days. 37 days camped, 29 days surfed, 909 miles, and a trip that I would do all over again. All of the people I stayed with and the fellow touring cyclists I met along the way made it possible. The state of California is a great one with varied landscapes and cultures. It offered me experiences that I didn’t know were possible. Traveling a ton previously before this trip, it changed my perspective on how to see the world.