Look at the surface of the 333fab Air Land Sea, and you’ll see a drop bar bike that fits bigger tires than most, amazing custom paint and graphics, and components that reflect the very best of what’s available. But dig a bit deeper and you find something that can really only be found in a custom bike, something that innovates and pushes the boundaries, something that’s truly special. The Air Land Sea draws you in. It asks you to look, not to rush, but to consider what a bike might be if there really were no rules. And, you can have one. 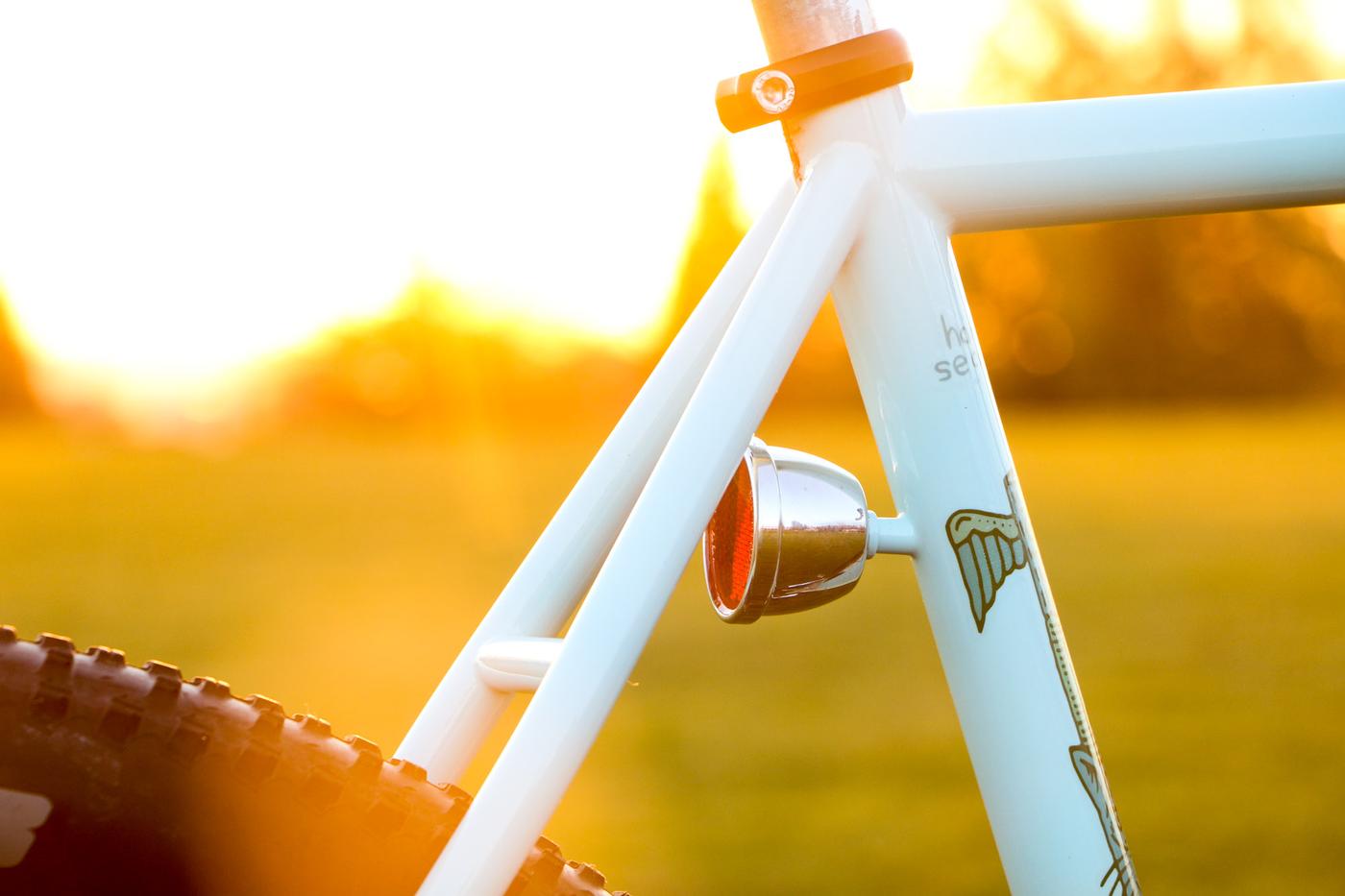 The Air Land Sea is Max Kullaway’s first crack at a standard geometry chart, something he’d been wanting to do as a complement to his custom work. Distill this bike to its geometry numbers, looking only from the side profile, and you might be fooled into thinking it’s just a ‘cross bike with big tires – but that only tells part of the story. Sure, it’s got angles that would do just fine on the ‘cross course, 65-70mm of bb drop, a tight rear end, and the option for either a carbon ‘cross fork or a custom steel low trail fork.

But turn the Air Land Sea 90º either way, look at it from the front or the back, and you see what truly sets it apart. On the 27.5×2.25” WTB Ranger tires, there’s still loads of clearance at both ends. The Pacenti biplane fork crown is a thing of beauty, and the rear end is still super short. It’s a bike that you’d be happy to shred on the ‘cross course with a carbon fork, but even happier to ramble in the mountains with a front load and the big knobbies on. 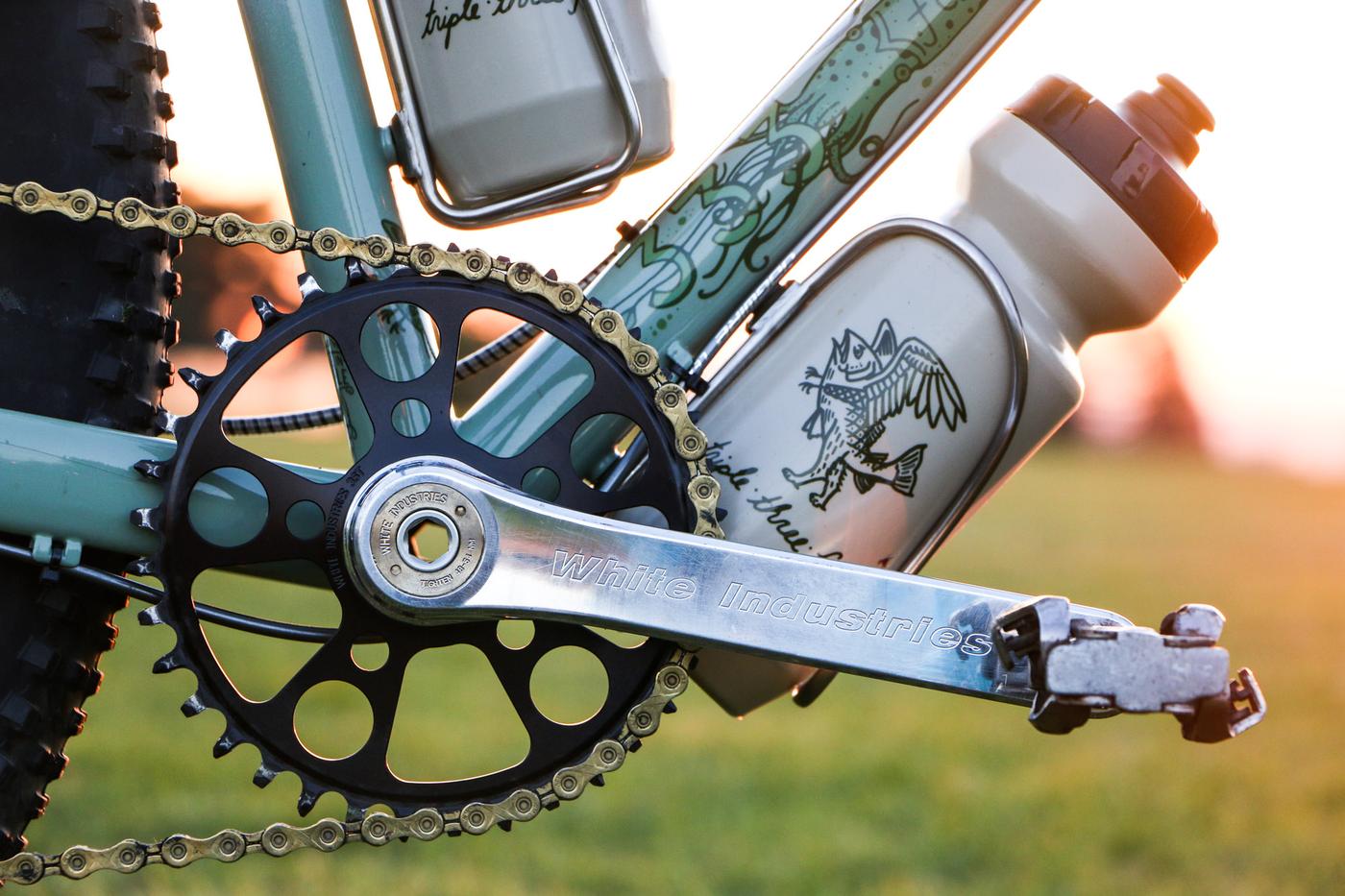 How Do You Achieve All That?

The major distinction of the Air Land Sea is the use of a 73mm mountain bike width bottom bracket shell, as opposed to a 68mm road width shell. This is the first step toward carving out the clearance for 2.25” tires and keeping the rear end short. However, Max did choose a custom spec White Industries crank, pairing a M30 mountain width spindle with R30 road crank arms, a combination he’s dubbed “MR30”.

The Air Land Sea is limited to a 20-bike production run, but its details are nothing short of custom. The Paragon through-axle rocker dropouts are beautiful, the curves of the seat stays are elegant, the proportions of the tubes with the 34/44 external cup headset are perfect. This bike, the only Air Land Sea currently in existence, also has internal dynamo wiring in the frame, the Compass tail light tucked under the seat cluster, and the optional 65mm-offset steel fork. Seriously, that paint. Max wanted the Air Land Sea to be special, and to reflect his outlook from his shop in Seattle. He had Kyler Martz do up a set of drawings, which are laid over a three-color fade inspired by the Cascadian surroundings, and done in Seattle by Adam Blumenthal at Now You’re Finished. The result is absolutely stunning, and yet another detail that’ll have you looking closely at the Air Land Sea in a different way. This gallery would be a lot bigger if I’d tried to document and include all of the artwork.

I’ve chatted with a lot of people over the past 18 months about my Thomson/Ortlieb decaleur setup, which is still going strong and has adapted to a number of other bikes over the past year. My setup was inspired by that of Rob at Ocean Air Cycles, and the 333fab decaleur is another step in the lineage of pannier-hardware-based rando bag holding systems. While Max provided the bike with a custom Air Land Sea buffalo plaid Ozette from Swift Industries (part of the Air Land Sea collection, here), I wanted to see if my Hinterland Ozette and Ortlieb rail would work with his decaleur, which is does perfectly. 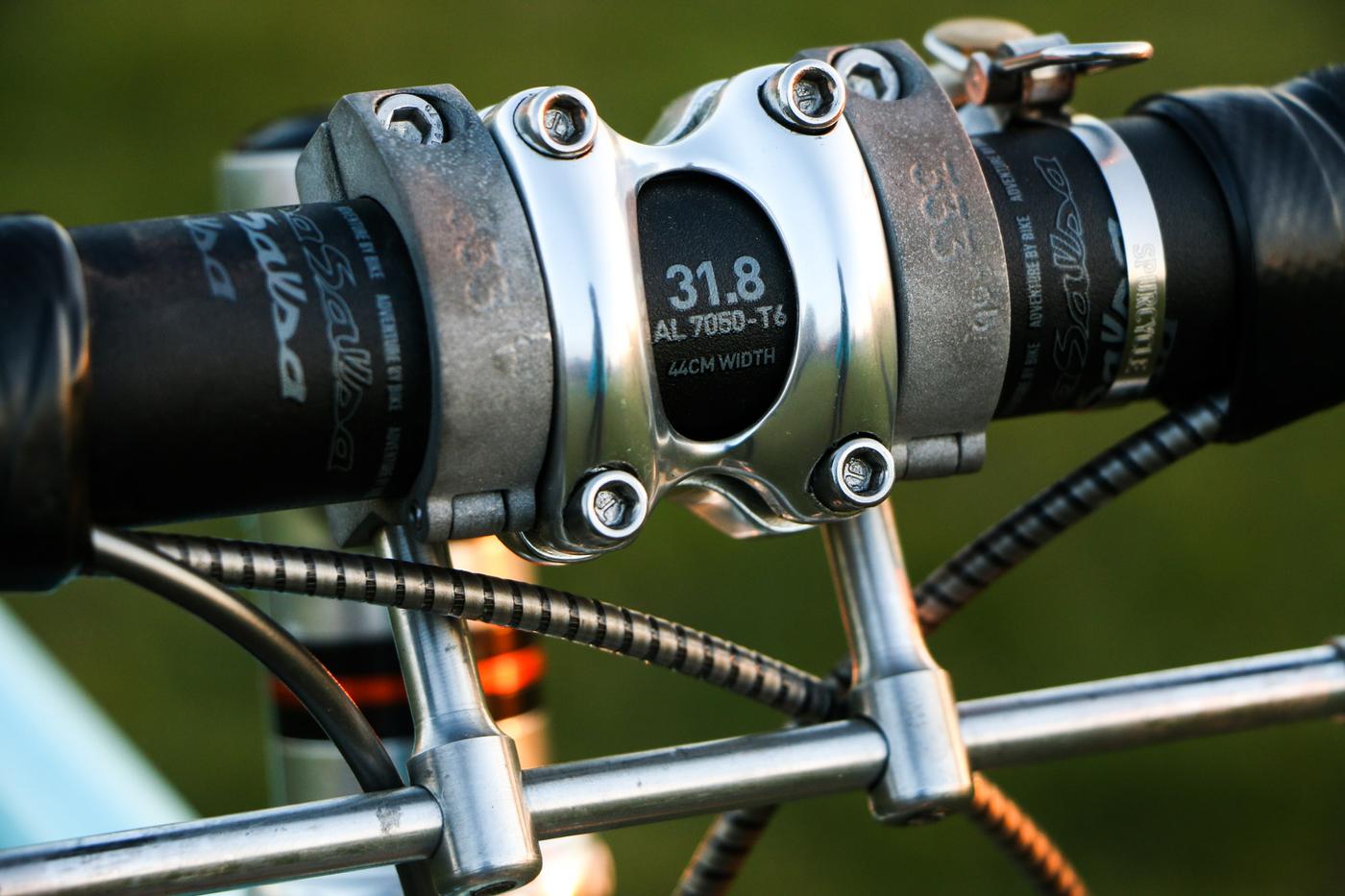 Max’s design uses a 3D-printed 6061 aluminum clamp, with a telescoping attachment bar made of 7075 aluminum with stainless hardware. The telescoping rods are adjustable for distance and height, while the clamp can rotate around the bar for fore-aft adjustment. For the production model the clamps will be black while the rods remain silver. It’s a really neat system and one that I’m so happy to see. Sure, you might be able to hack something together for less money, but it’s not likely to look this good or be nearly as easy to adjust.

I can say this with confidence: Max’s design takes the idea that Rob and I had been working with, and makes it more adjustable, lighter, and more elegant as well. The 333fab decaleur is a huge step forward and a massive innovation for rando bag users. When these become available – and last I spoke with Max about it, the decaleurs are on pace to be ready around the same time as the Air Land Sea production run – I’ll definitely be buying one. 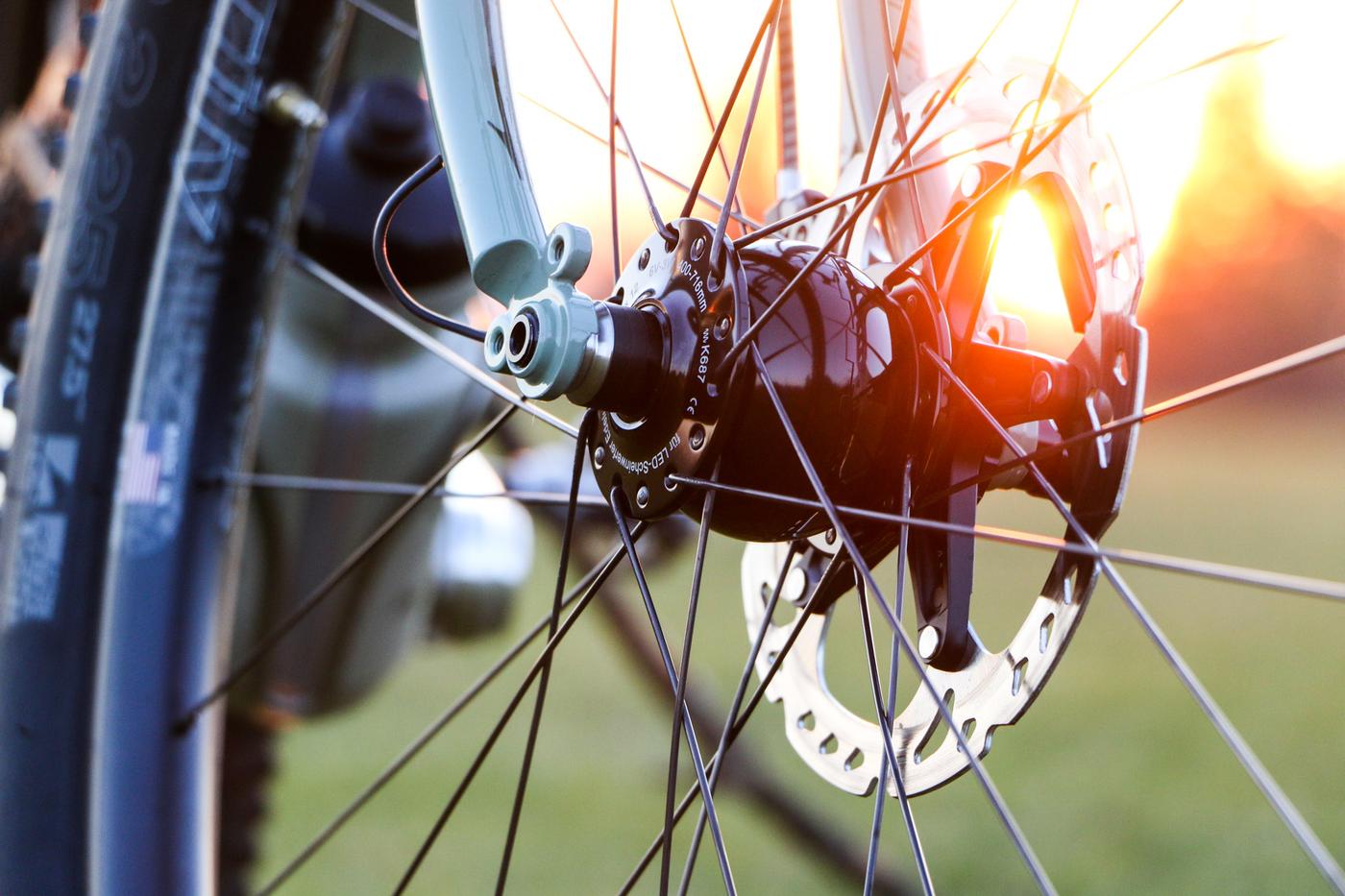 All the Good Stuff

Spec-wise, this Air Land Sea has a lot of things I really like. The Paul Component Klamper brakes stand out, but the fact that they’re hooked up with Yokozuna compressionless housing is ideal. Force 1 is great. Max’s custom-spec White Industries crank affords lots of tire clearance yet better Q-factor than a full mountain crank. The SON 28 dynamo hub and White Industries CLD rear hub are a perfect match, though personally I would choose a rim other than the Blunt SS, which is ridiculously tight to get tires on and off of. The Nitto Campee 32f rack is one of my favorites, and the decaleur is great. Many of these things feel like home to me!

But How Does It Ride?

With Compass Cycle and Bicycle Quarterly based in Seattle and the Seattle International Randonneurs’ healthy membership, there’s a solid contingent of low trail advocates here in the Pacific Northwest. I’ve ridden a lot of front loaded bikes with rando bags and baskets, most of them with 45-50mm offset forks, and I don’t really mind the way those bikes handle. There are certain times when you do feel the flop of having all your weight on a rando rack, and that’s where the 65mm offset low trail fork comes in. On dirt, where traction is already decreased, the low trail geometry definitely makes for a very floaty feel. It’s ultimately capable, and super shreddable both with and without a front load. That said, for rough singletrack riding, the weight of a bag on your fork is not going to magically disappear with a low trail fork. On dirt roads, and at lower speeds, the easier steering of the low trail geometry does help the Air Land Sea from feeling floppy like some bikes can.

Where the low trail geometry really shines is cornering on at higher speeds with a front load, particularly on hard surfaces. At these times, I’m super stoked on the fork and the general geometry. The reduced wheel flop of the low trail geometry lets the Air Land Sea fall over into a nice arc when carving descents – it’s a joy to slalom when you’re going fast and have lots of road to use up. When I need to go in a straight line, though, I’m less stoked on low trail. The steering requires such little input to make the bike turn that I find myself weaving around a lot. Low trail aficionados tell me that characteristic is desirable when you’ve been riding for 30 hours… maybe Max will let me keep the bike long enough to try that out. Overall, I’m not sure why there’s such a big a gap between a standard 50mm touring fork offset and the rando-preferred 65mm, and I’m really curious how 55 and 60mm would ride on a bike like this.

For all its innovation, the Air Land Sea isn’t immune to the same problems being chased by all custom builders and production manufacturers: the same three things – chainring, chainstay, and tire – are fighting for space right behind the bottom bracket.

To be honest I’m not bothered by the 73mm bottom bracket shell. I’ve got an XT mountain double on my Wolverine which means I’m already riding a Q-factor higher than what the Air Land Sea has with its hybrid White Industries crank. I just did a 200 km brevet on the Wolverine this past weekend, and have no complaints about its Q-factor even for long rides – and the same goes for the Air Land Sea. That said, one of the decisions Max made with this bike was to skip accommodating a front derailleur. While I have primarily been riding 1x drivetrains on my drop bar bikes for the past couple of years, I feel this is a limiting factor – especially with a 36 tooth chainring. I’ve been talking to Max about this over the past few weeks as I put miles in on the Air Land Sea, and he’s mentioned that he’ll likely end up dimpling the chainstay on the production Air Land Sea bikes to accommodate a larger single ring.

From my perspective, while I’m usually quite happy on a SRAM 10-42 cogset on a drop bar bike, I do find myself looking for slightly more gear range in certain situations, or a narrower cogset paired with a wide double to narrow the jumps between gears. With the Air Land Sea, those who want a double will have to choose Di2. I have a feeling most will choose a single and be happy with it. 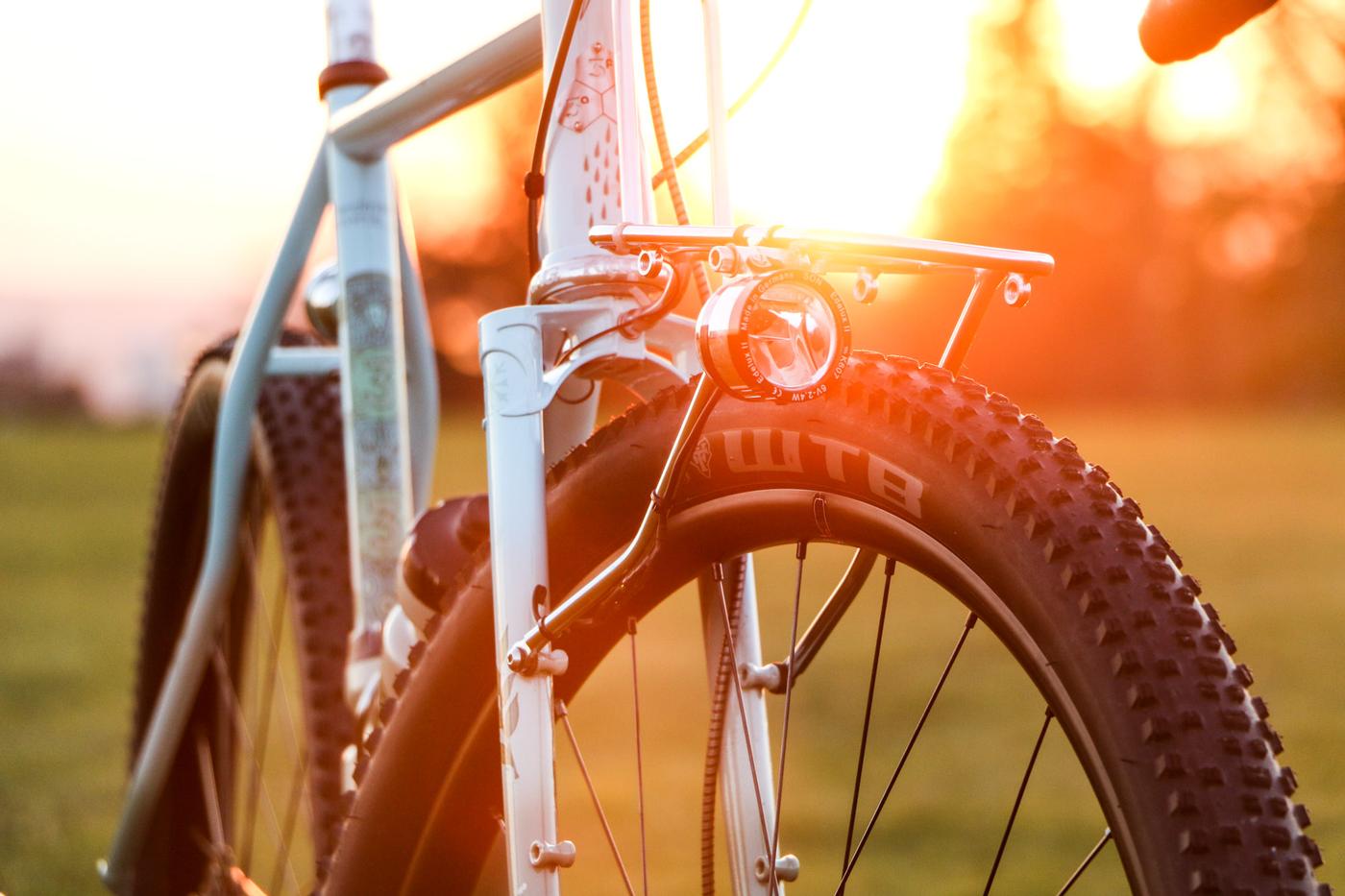 When Stephanie and I started conceiving the bike builds that became our Wolverines, which was nearly two years ago, options for drop bar bikes that fit wider-than-average tires were few and far between. And at the time 650b wheels on drop bar bikes was certainly not the norm. I remember researching those bikes, reading what people were up to on blogs and on Instagram and so on, and finding a real resistance to 650b road tires on bikes with 70mm of bb drop.

This was also, of course, before WTB released their tubeless-friendly Road Plus tires, opening the floodgates and opening a lot of peoples’ eyes. Sure, there were enough mountain bike tires and a few 650×42 options and the Compass 650×48 Switchback Hills out of the Panaracer factory, but there definitely was a gap. The Open U.P. was a real outlier at that point, and it would still be a few months before John hopped on the Crema Duo, which went on to inspire Kyle’s Stinner.

We chose to go 650b with our Wolverines anyway and it was absolutely the right choice. We traveled on 27.5×2.1 last year, and now both bikes have Sim Works Smooth 62 fenders around tubeless 47/48mm tires. It was an unusual choice then, but now these kinds of bikes just seem normal to me. Many more people are choosing to build bikes around 650b, yet production bikes are still playing catch up, with only a few options out there. The 333fab Air Land Sea is a perfect example that you can still get something truly out of the box by working with a custom builder. I’ve long been dreaming of a bike that’ll do exactly what this one does. It fits even larger tires than my Wolverine, which means gobs of room for fenders even with 2.1s – that’s something the Wolverine can’t do. The custom details and beautiful paint work are icing on that cake. It’s a bike straight from the imagination, and that’s a big part of what makes it special.