On Building the Epiplectic Bicycle

I firmly believe that bicycles are the enemy of organisation, like dogs are the nemesis of germaphobes. As a bicycle owner, I know that if I’m out on a jaunt with my bicycle and it sees an adventure or even a hint of mischief, there’s almost nothing I can do to stop it rolling in that mischief like a dog rolling in the scent of some bit of rotting animal it’s found on a beach. Sometimes I’m not sure if I own bicycles or if bicycles own me. I feel like there’s nothing I can do to stop them. However much I misbehave and try to neglect them, they always manage to corner me into doing what they want. Pumping tyres, oiling chains, even cleaning them. I do whatever they want me to do and if I refuse, they make my life very difficult. I often chose the path of least resistance.

At most points in my life, like most people, I’ve felt at odds with the world, which is understandable because it’s a very weird and unnatural habitat for a human. I think that may be primarily because bicycles have forced us to make the world more suitable to their needs; paving roads, planting towns to buy snacks at easily rideable intervals, and building bridges over rivers they can’t otherwise cross, over much of the world. There was a moment however when I first went to art school where three disparate cultural shards somehow refracted the nonsense of the world into something sensible, tangible, and relatable. I was riding a lot back then because I wasn’t especially happy and didn’t have any real friends so I probably thought about bicycles more than is healthy, maybe this is why they spoke to me in a way that nothing else could. 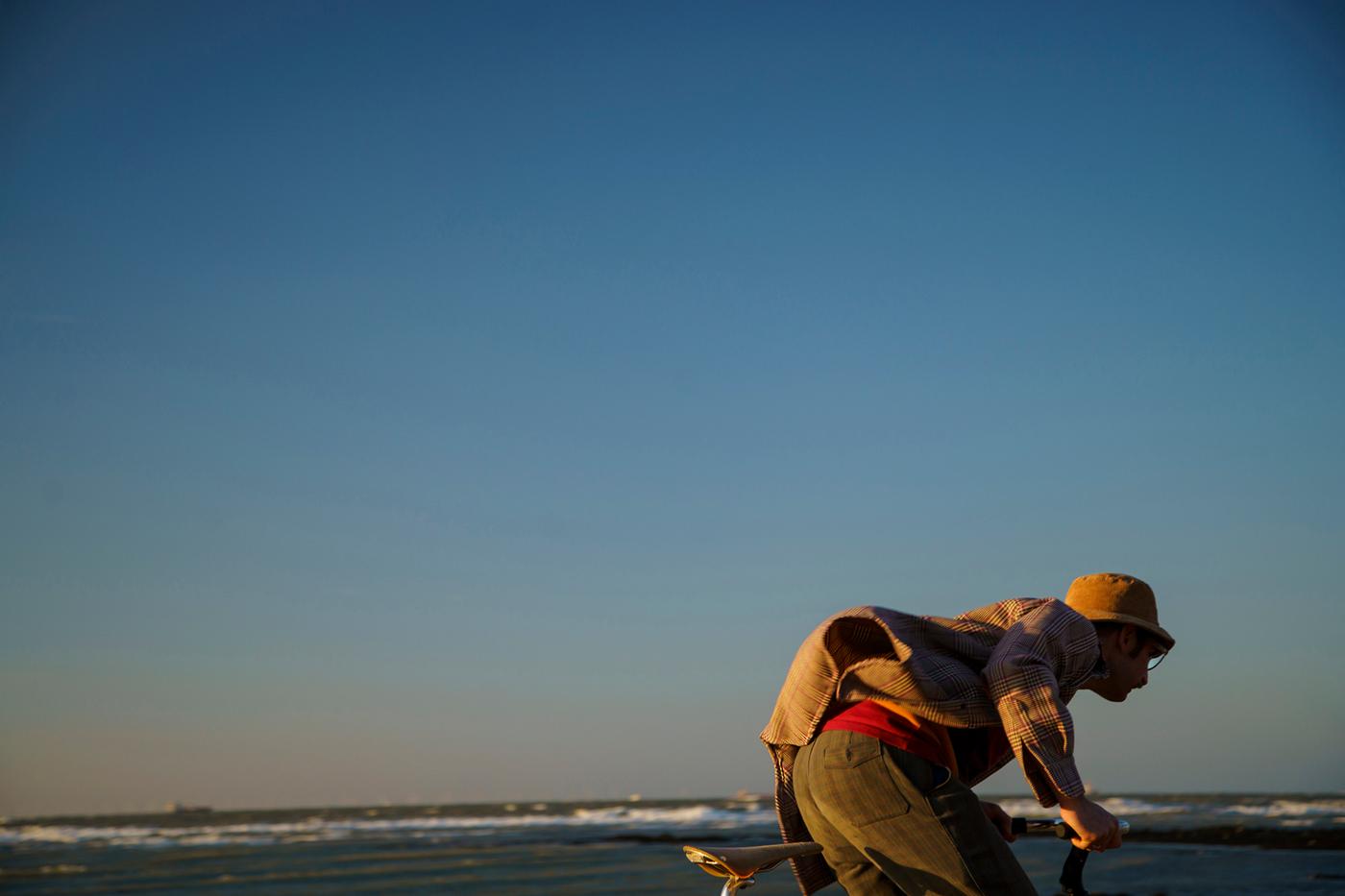 Flann Obrian’s “The Third Policeman”, a book written in 1939 in Ireland and deemed “too weird to publish” until 1967, that follows two gross and mind-bending bicycle riding policemen, (un)wittingly tormenting a man obsessed with the fictional philosopher “De Selby” who’s forgotten his name and accidentally wandered confused into the afterlife. They enlighten him with concepts like “the atomic theory” whereby, in riding a bicycle over rocks and cobblestones, some atoms of the bicycle are pounded into your butt and some atoms of the butt into your bicycle. In this process, your bicycle becomes more human and you become more bicycle, which is a great danger to people riding bicycles for over 50% of their lives, who become prone to falling over if they ever stop moving, unless they’re leaning up against a wall.

Another discovery was the artist Bas Jan Ader, who’s practice centred around leaning back on a chair until the point of letting go, accepting the consequence of falling, and trying to capture that moment before the fear of falling set in. One of his seminal works, being a video of himself riding along a canal in his native Netherlands on his bicycle, then falling in. He made relatively few works before being lost at sea during the making of the second part of a three-part artwork entitled “In Search Of The Miraculous” after a book by P.D. Ouspenski about the savant and spiritual teacher Gregori Ivonovich Gurdjieff, who has since informed much of my personal philosophy.

The third discovery was the film “Black Cat White Cat” by Emir Kusturica, which follows three generations of a community of Roma Gypsies on the banks of the Danube. The father’s squabble and try to profit from cheating one another in shady business deals, often dictating their children’s unhappy futures. Wealthy grandfathers cling onto the last fleeting joys of reckless abandon they’ve enjoyed throughout their lives, trying desperately to pass their wealth and wealth of knowledge and wisdom onto their grandchildren who unwittingly rebel against their parents, and fall helplessly in love. It’s hilarious, honest, effortlessly human, and wildly chaotic, highlighting the cycle of make and break, tragedy, and comedy. It’s not even Emir Kusturica’s best work, but for me, it was the icing on the cake of the ideas that would inform my life from there on in. 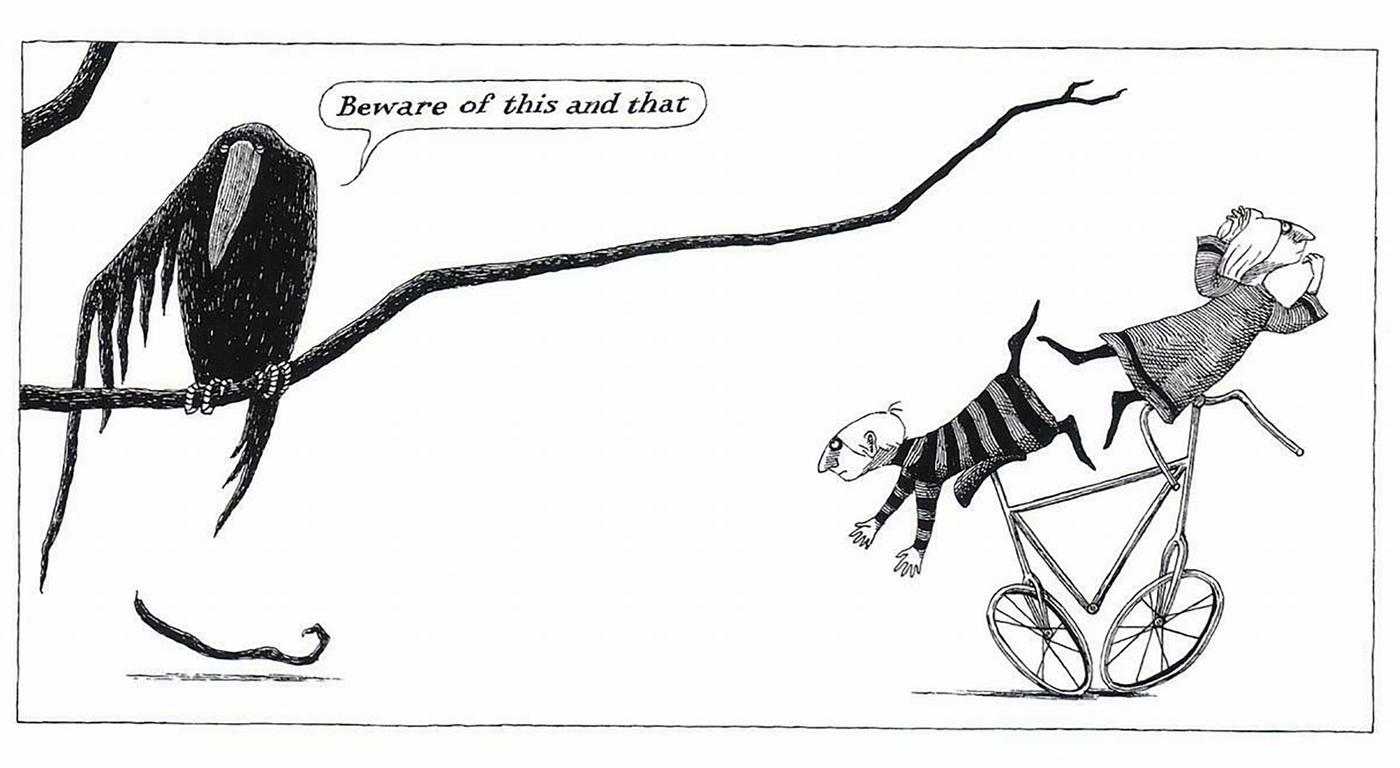 There are so many wonderful and useful ideas in these three things that it’s almost impossible to talk about them without at least one bottle of mescal and a candle, or so I thought. They say it takes four hours of uninterrupted idleness to make one good hour of painting. It was during those hours, feeling bloated, having gorged myself like a vampire on the veins of these three bits of culture, that I (re)discovered Edward Gory’s “Epiplectic Bicycle”, a 64 page long kids book of mostly pictures with a little text by the illustrator, first published in 1965. This was the distillate of everything.

A bicycle finds two kids smashing each other over the head with croquet mallets, convinces them to stop it and go for a ride. As they roll through the story, the bicycle contorts itself to be whatever it needs to be in the situation. They see loads of weird ominous and often scary stuff, but when they confront it, nothing is as scary as it seems to be and everything is fine.

As Elenore Roosevelt famously said, “there’s nothing to fear but fear itself” (I know that because of the band Primus, who made the theme music for Southpark) but the bicycle continues to be epiplectic. Our guide through the best and worst life has to throw at us, is mischievous and helps us only for its own benefit. For years I held onto this ideology, this divine character of a bicycle that has existed since before bicycles were invented, because bicycles are the living, breathing, physical embodiment of the Norse god “Loki”, the Roman “Pan” or the Greek divinity “Dolos”. According to Plato’s theory that physical things are low-grade copies of more perfect divine objects that they represent, bicycles aren’t quite as naughty as those guys, just a bit mischievous. 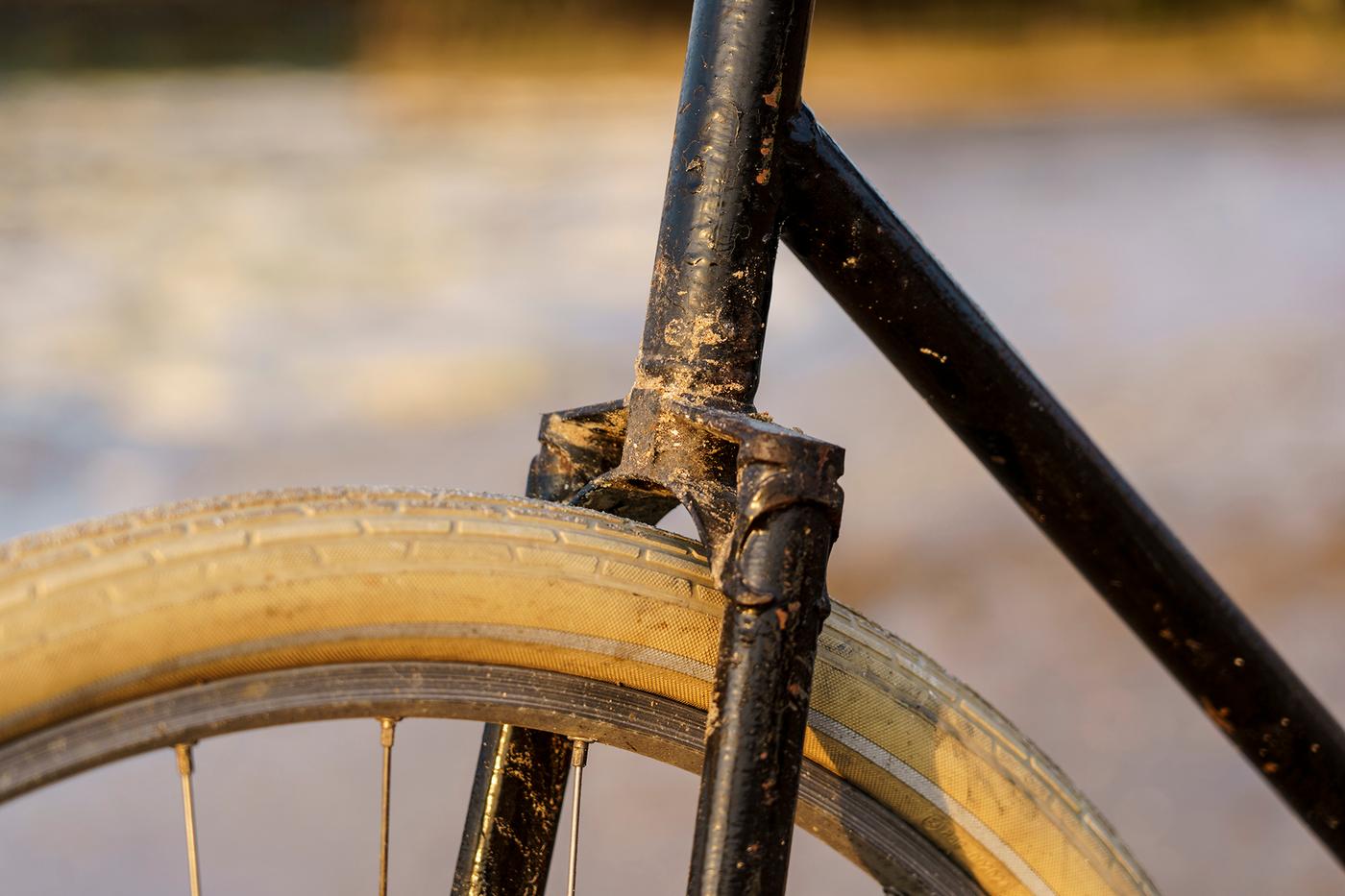 Almost a decade passed before I would be adequately literate in frame building and bicycle design to put my ideas down in steel. I wanted to build a bicycle that was the pure physicality of mischief, imbued with shamanic power like the felt and fat that the artist Joseph Bueys used for much of his work. I needed an epiplectic bicycle to show me the ordinary in extra ordinary ways, to force me to be mailable to its will and to look up at what was around me, because the daily grind of smashing each other in the head with proverbial croquet mallets is tedious, exhausting and headache-inducing. I didn’t want to think, I just wanted to be taken for an amazing ride. It’s so easy to be blinkered when you go down the rabbit hole of any discipline, sure you can feel the basically imperceptible differences in comfort from one or another tube set with the same three-inch tyres, and that is what it is to be a connoisseur. Being a connoisseur, having taste and understanding quality is great but that’s not all of the enjoyment of wine. Zorba the Greek (who is a fictional character) said: “it’s not what you eat, it’s what you DO with your food that counts, what’s the point in eating good food if you’re not going to turn it into good humour and dancing?”. I think its definitely harder, if not impossible to do that as a connoisseur. I wanted to build a bike that could be understood by anyone, whether or not they’ve ever ridden or looked at a bike before and would teach me and guide me through its world. I used plain gauge T45 tubes, some 853 fork blades that had misbehaved in the construction of another bike, and some rusty Pascenti crowns that came as part of a job lot of bits I’d bought from a hobby builder who’d quit. I wanted a plain gauge party because it was cheap, but partly because it was stiff. I felt the need to use the smallest OD I could get away with and in the spirit of the drawing, leave out the chainstays. I spent four days gathering the right sort of energy; reading, riding, watching movies, eating good food, and messing about with boats until I was ready to burst. On the fifth day, in a wild and automatic frenzy, I built the frame. It came together without any thought or effort. The parts BELONGED together so when I stopped keeping them apart with my stupid brain, my clever hands knew how they should be assembled. The frame was built, painted, and assembled inside of a day. I painted it with a brush in black Hammerite partly because I wanted it to look like it had always existed; because in spirit it had, but partly in the footsteps of my friend Tom’s dad, Vernon. He was a member of the “Bonzo Dog Doo-Dah Band” and as such a professional silly man. He and his friend, Jerry, famous for making a “sociable” (a tandem where you sit next to each other but still only has two wheels), stinking always of petrol and leaving black fingerprints on the cheese, were heroes of my late adolescence. I couldn’t ride it for a day or two as the paint takes a week to dry, but it insisted that it MUST be ridden so I ruined some trousers and patched up the paint later. I’ve built so many bikes since that are so much more spectacular and functional, but none have anything close to the unique essence (to use the world personality is to degrade the bicycle to the status of a person) that this bike has. I’d never ridden brakeless fixed before, (as for a long time I lived in or near enough to London for that not to be a good idea) but this bike refused to have brakes or foot retention. Its flat, wide moto pedals covered in skateboard grip tape, coupled with the wrong number of chainstays, mean that acceleration and deceleration only really happen on its terms. As we weave together, in and out of my thoughts and rocks and country lanes, its wheels seem to move around objects independently. It bends and twists and thinks for me, taking me wherever it wants me to go. 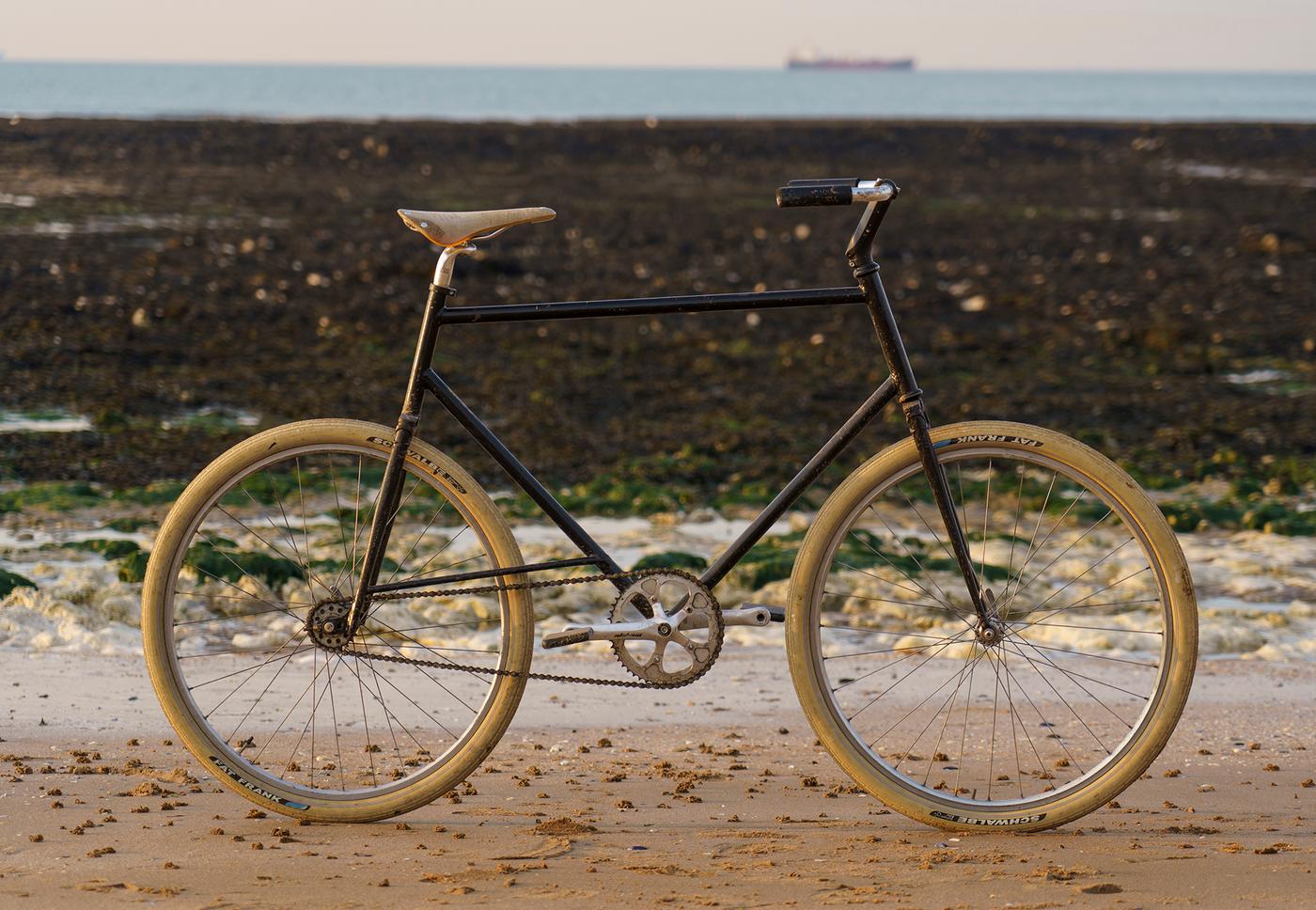 Over the years I’ve learned to trust it and that when I’m with it, nothing is really as scary as it seems and everything will be ok.