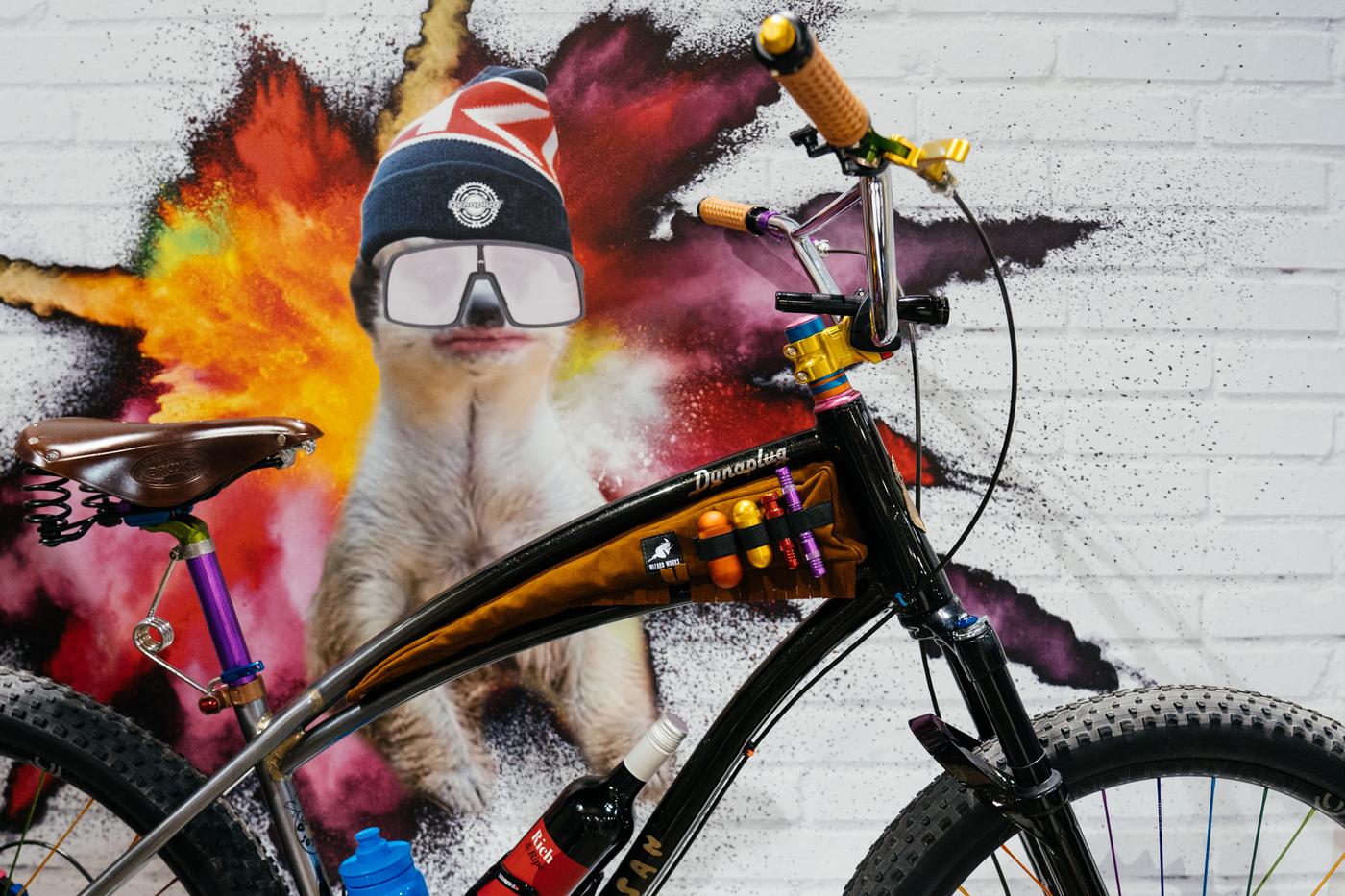 That trip was really a huge voyage of discovery for me. It was super interesting talking to Steve Potts, the nicest man in the world, Paul Sadoff, and the late Bruce Gordon about their relationship with the British frame building scene in the 1950s. Much of their early work was in homage to Mercian, Hetchins, Holdsworth, Bates and all of the bikes that grew up being super excited about. I found that super interesting as I’m essentially living as part of the next generation of British frame builders in the UK, in a scene that very much focuses its attention on the work of builders on the opposite side of the Atlantic. 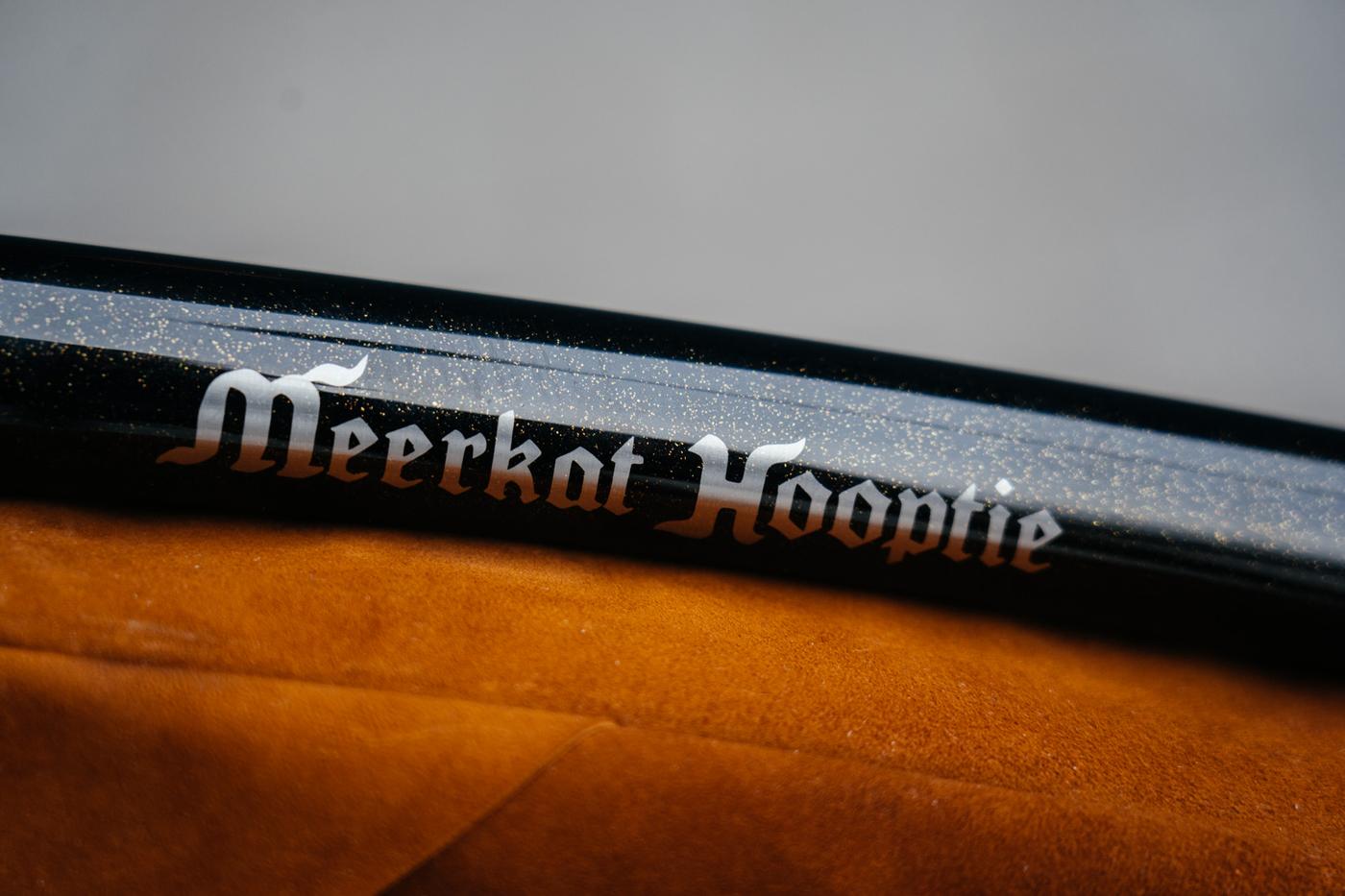 It’s interesting to see the scope and range of frames coming out of both the UK and the US, I can’t help but feel like although there is such diversity there are somehow unifying factors in design or approach. It’s really hard to place exactly what it is that identifies an American made bike and separates it from a bike made in the UK. Most of the time I feel like you can tell, but to describe the way I feel about it, I began looking for a specific example and landed on Hope Tech and Paul Components to help tell the stories through a pair of bicycles with their parts dressing the sibling frames of Dynaplug and Dear Susan. 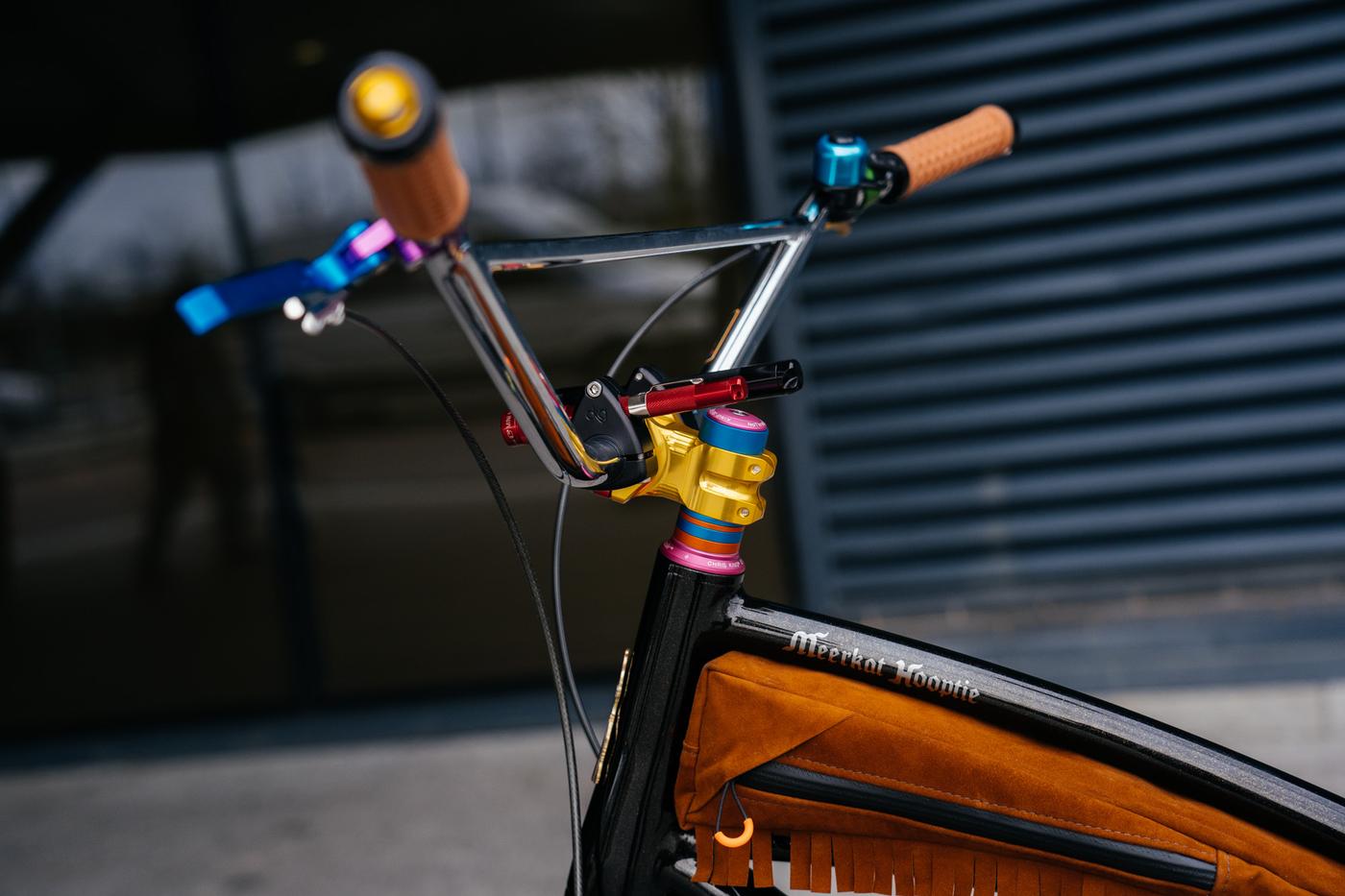 I was born in 1987, in 1988 Dynaplug was born/invented and in 1989 Paul component began, as well as Hope technology. Paul and Hope both basically make the same stuff but in each case, one is so incredibly different from the other. In 1989 The Meerkat was skating around listing to Beastie Boys and making the only tubeless tire plugging solution out there for cars and motorbikes. Paul Comp and Hope Tech were both making quick releases. I did a quick search to see what was going on in Chico and Barnoldswick respectively to see what was going on in those places in 1989. In Chico, Mudhoney played in a music venue. In Barnoldswick, the road layout changed around a new roundabout. Nothing to report there, really. 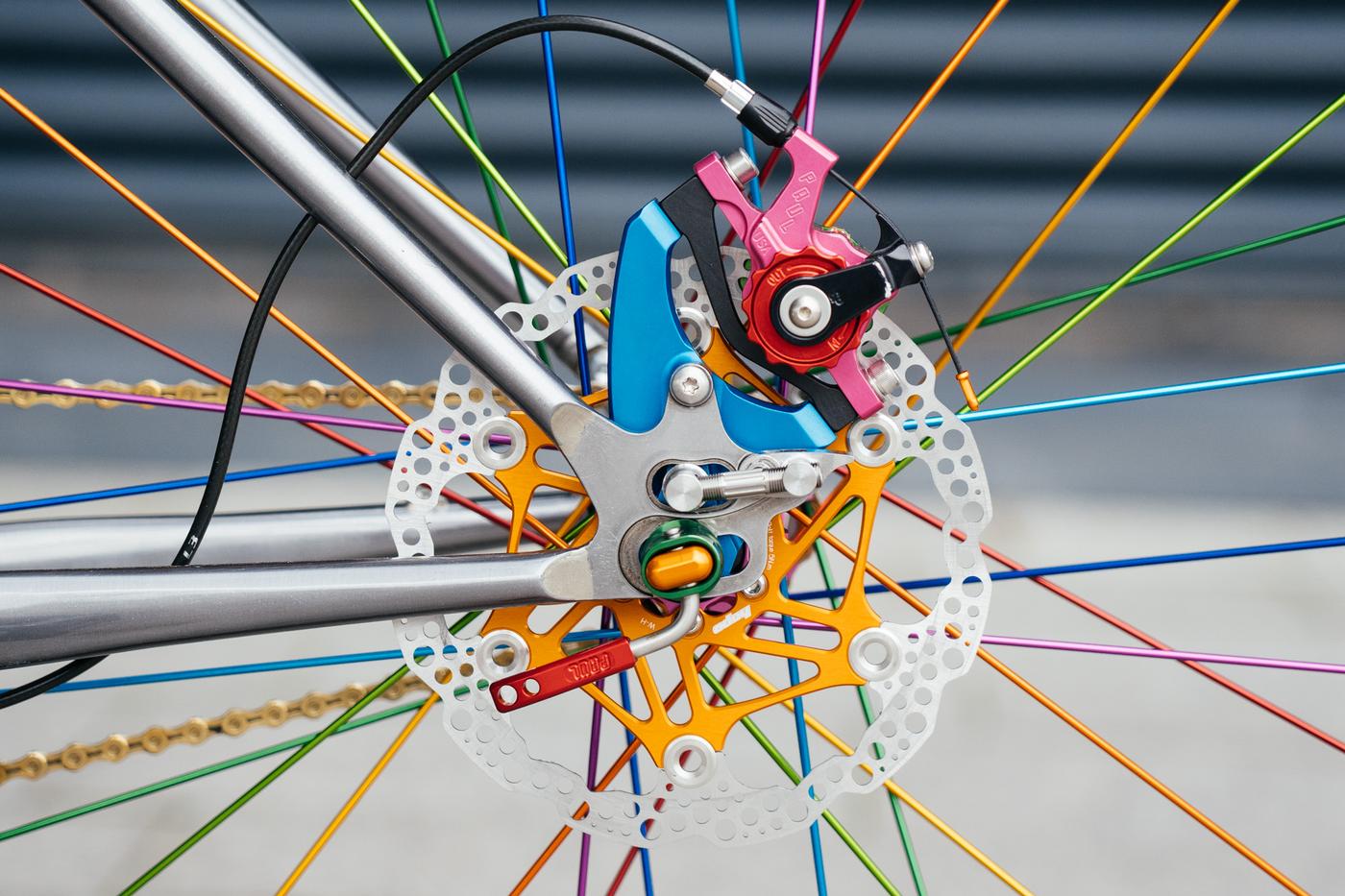 Over the following 30 years, Paul Comp and Hope Tech both expanded their line of products to include quick releases, stems, brakes, seatposts, hubs and more. Comparing a Hope stem to a Paul Comp boxcar, or a pair of E4 brakes with Tech 3 levers to a pair of Klampers with Love Levers really speaks volumes about the difference in approach in terms of design between the UK and US. Both are absolute masterpieces of design. The best quality and best-performing components money can buy, built for longevity and designed to enhance the cycling experience. Yet they are each so SO different from one another. They both speak of the history of the last 30 years of manufacturing, and looking through either Paul or Hope back catalogs as the years go on, you can clearly see how cycling has changed culturally, and how these masterfully-designed products have changed with the times to cater to the needs of cyclists at the cutting edge of cycling culture. 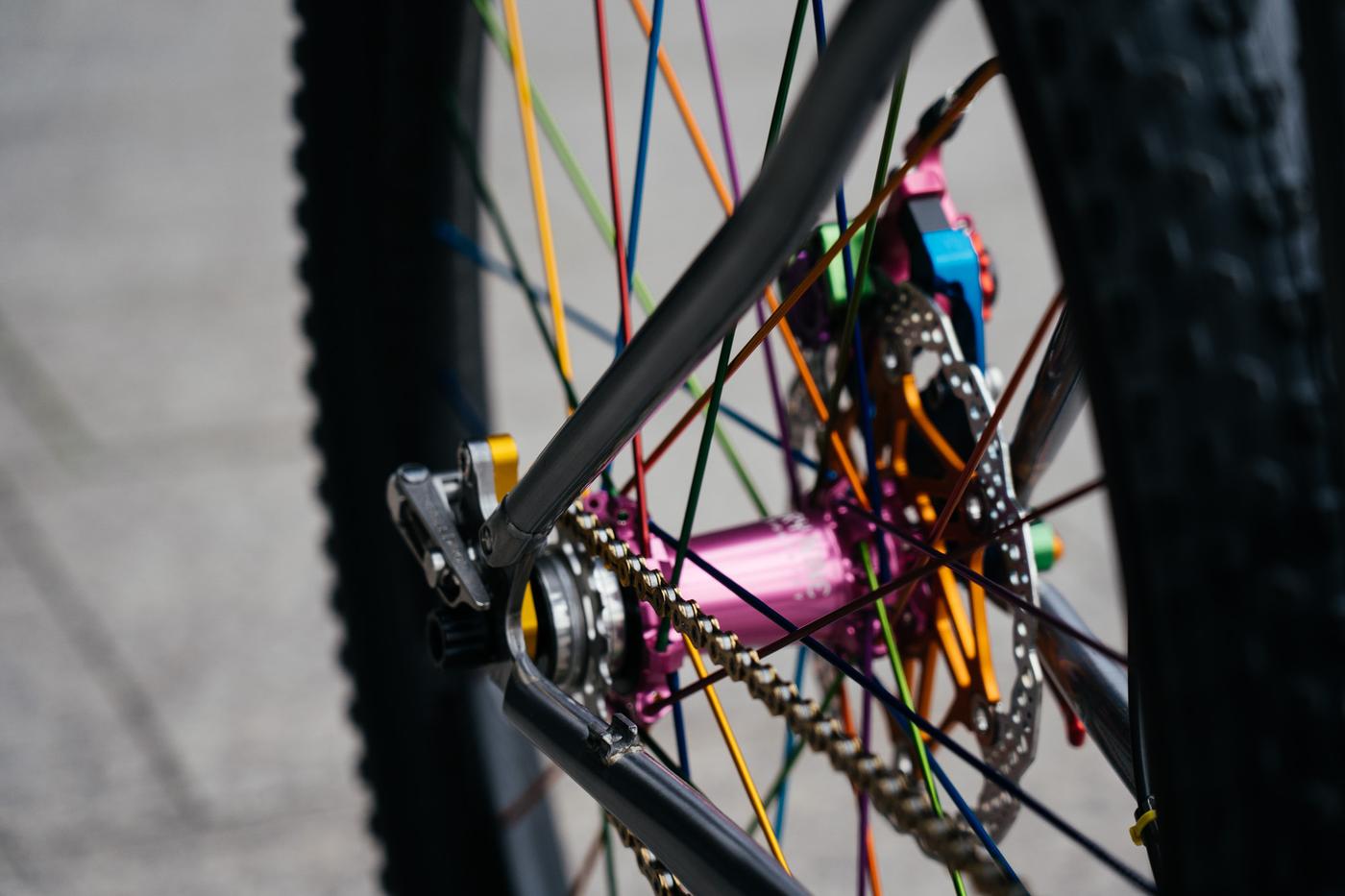 I’ve personally maintained that the history of cycle design can be related quite closely to the history of warfare. Material science and the development of completely new materials and manufacturing methods are expensive pastimes, these technologies are often developed or discovered with the kind of big money afforded to research by big business, governments or the military. Without these, there would be no high-end steel, no readily available lathes and mills in the 50s after the Second World War or relatively inexpensive CNC machines in the 90s after the Cold War, without which steel frames would be the fabulous robust air-hardened steeds we know and love and components couldn’t be the complex and incredibly functional jewels that they ware. When I visited the Marin Museum of Cycling last year Joe Breeze explained to me a more specifically American history of cycle design that I hadn’t heard before… that until the 1940s in the US for the most part pneumatic tires hadn’t caught on, and as such and in tandem with America’s road layouts being centered around car traffic bicycles were widely considered as a child’s plaything rather than a mode of transport or recitation. That is how big a part of cycling technology and utility tires are. 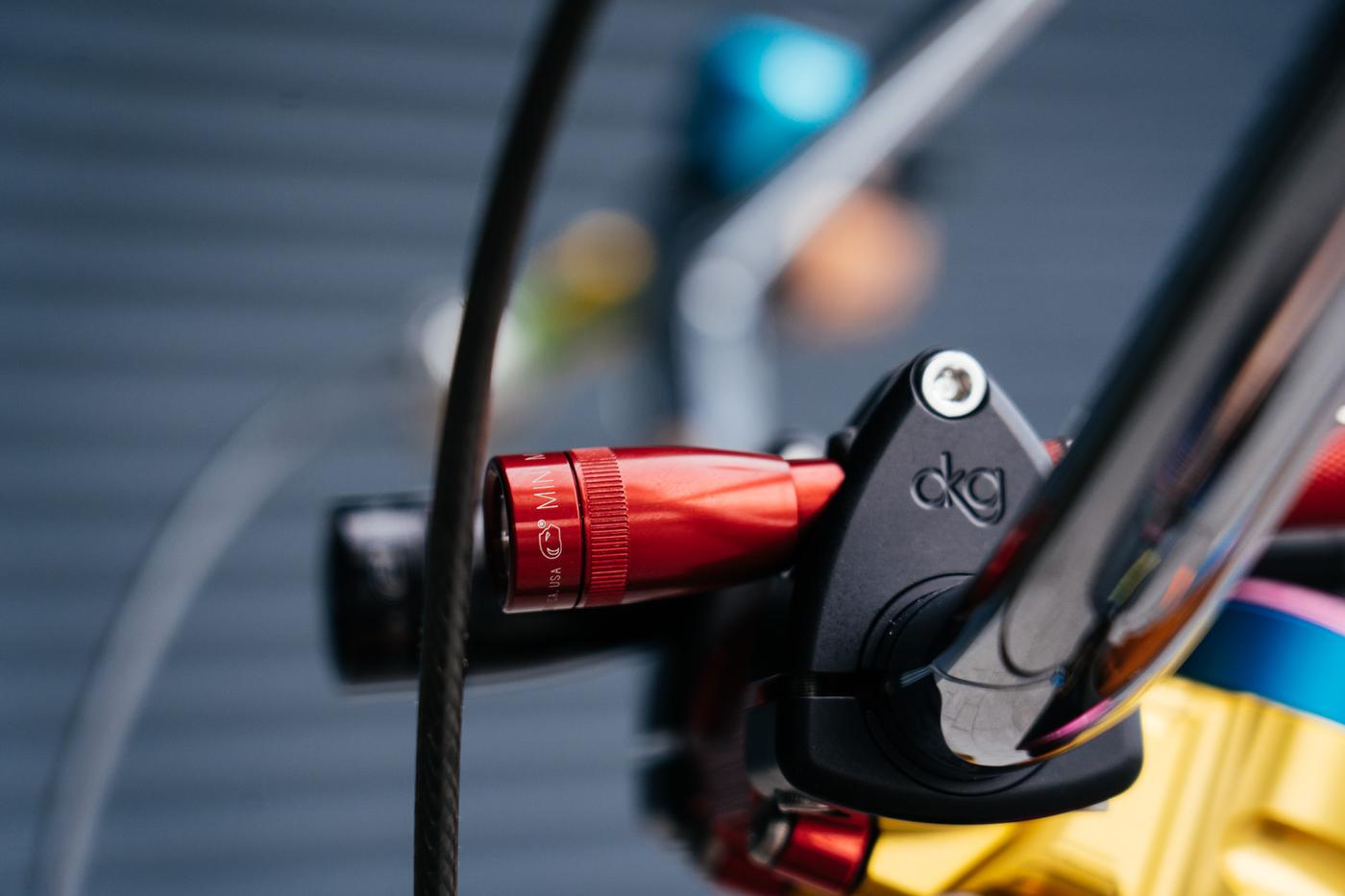 Going back through the hope and Paul catalogs there is a clear development everything is better. Hubs, brakes everything. All the old stuff works well, but all the new stuff literally lets you ride in ways and conditions that would have been much more challenging 30 years ago. In the last five years, as far as I can tell, tires are once again the big news in cycling. New high thread count high volume tubeless tires offer potentially the most performance-enhancing, experience improving change that can be made to a bicycle.

As such working with Dynaplug as been a real privilege. Not only because they’re the best/ only sensible solution to repairing the good new tires that everyone is riding, that make everything more fun for everyone, but also because they’re just so nice.

They’ve been incredible and super interesting to work with, and I feel lucky to have has the opportunity to hang out and get to know them. Joe and Sheryl have the best stories and have lead thoroughly incredible and diverse lives while creative director Ryan, inventor of the Dynaplug Air (the best one) also effectively manages the dream team of an intergalactic meerkat janitor who somehow subsists entirely on red wine and Eli the $8 per hour intern who sometimes does things. 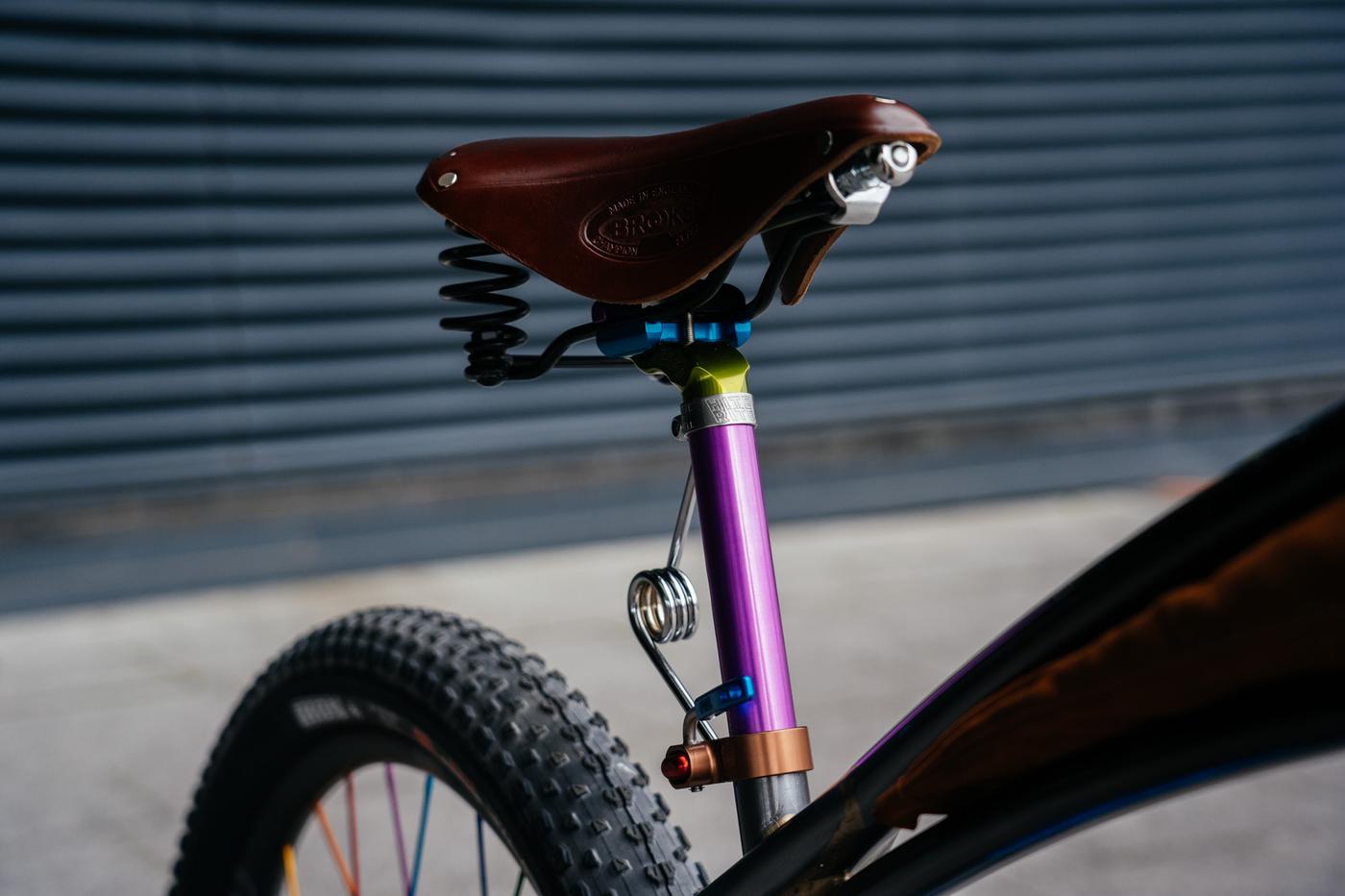 The bikes are designed and fitted out accordingly. While both are designed point to point around my not-patented “middle of the road geometry” which is in homage to the bizarre and hilarious acronyms and self-assessments of geometries of the past, and a poke at the current trend for mountain bikes being as low long and slack as possible. They both feature a slightly long (but by current standards relatively conservative) front center, they’re relatively low compared to everything else I build and they’re slack enough to feel comfortable and agile on most things going up or down.

They’re both built with a mix of Columbus Life, Zona and T45 steel featuring Columbus’s new gigantic head tube with internal cups. Both feature paragon dropouts because there’s just nothing out there that compares in terms of quality design or versatility. The single-speed utilizes the incredible toggle drops for their Chain/belt tensioning prowess and ingenious design while the geared bike uses the rocker dropouts for their versatility.

While the Meerkat Hooptie references the design of the Schwinn Cruiser that Joe Breeze talked to me so passionately about when I visited, the Susan Hooptie nods to the Cleland Aventura, which is the closest semblance the UK had to a mountain bike before they were imported from the states. 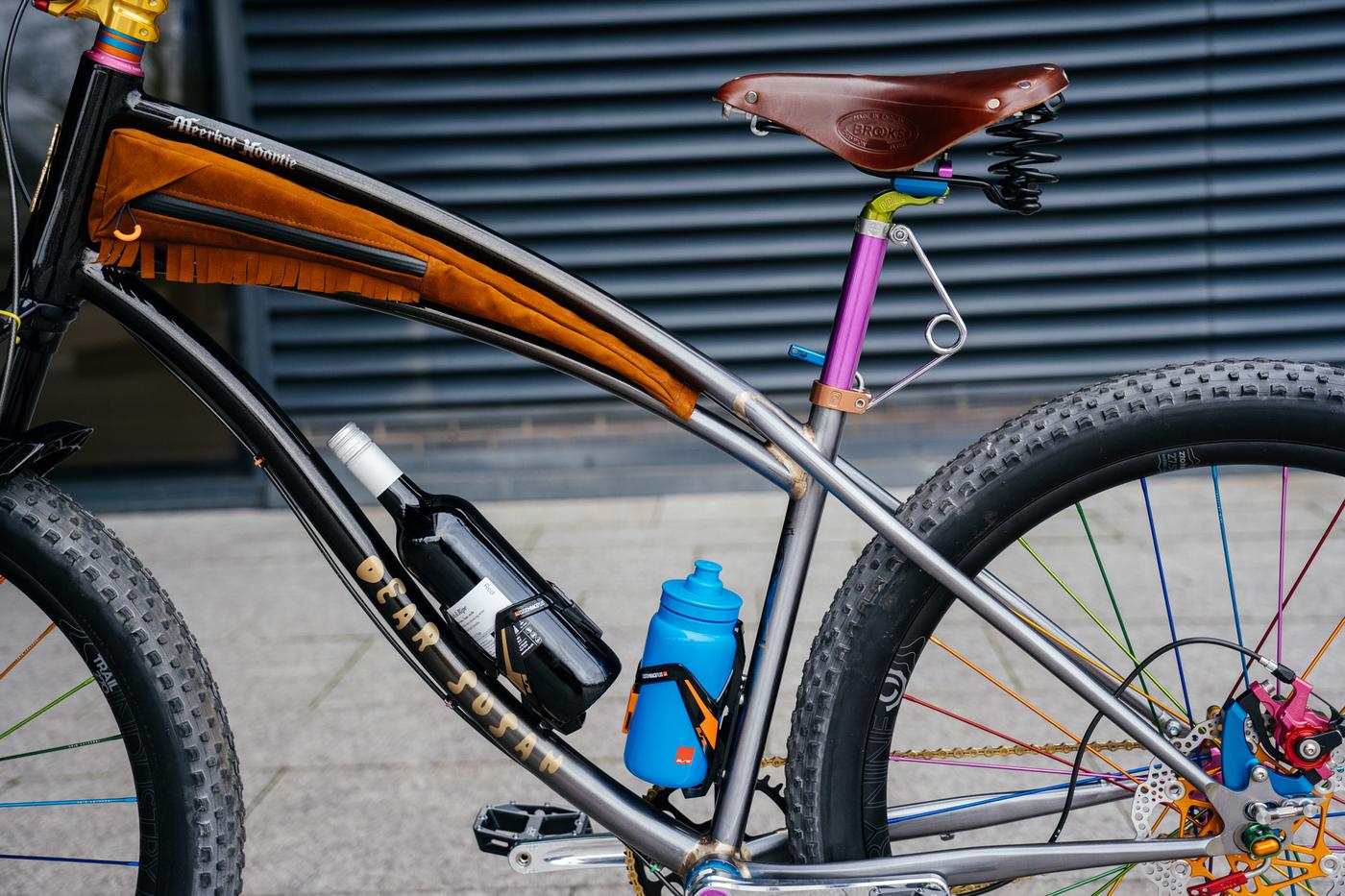 The Meerkat Hooptie features a majority of parts made in Northern California by Paul and White Industries, specially selected by the second nicest guy ever (after Steve Potts) Travis, of Paul Comp, to resemble as closely as possible the color palette of a bucket of Lego. The wheels were put to feather by the mystical Shaquille o’Wheel at Industry Nine, rotors by Hope (UK yes, but they’re the only nice anodized floating rotors out there) and the headset sprocket and bb by Chris King. Bars by S&M because yeah, Hite Rite by Joe Breeze, spring saddle by Brooks, grips (featuring the prototype Dynaplug bar ends) by ODI and tires by Maxxis. 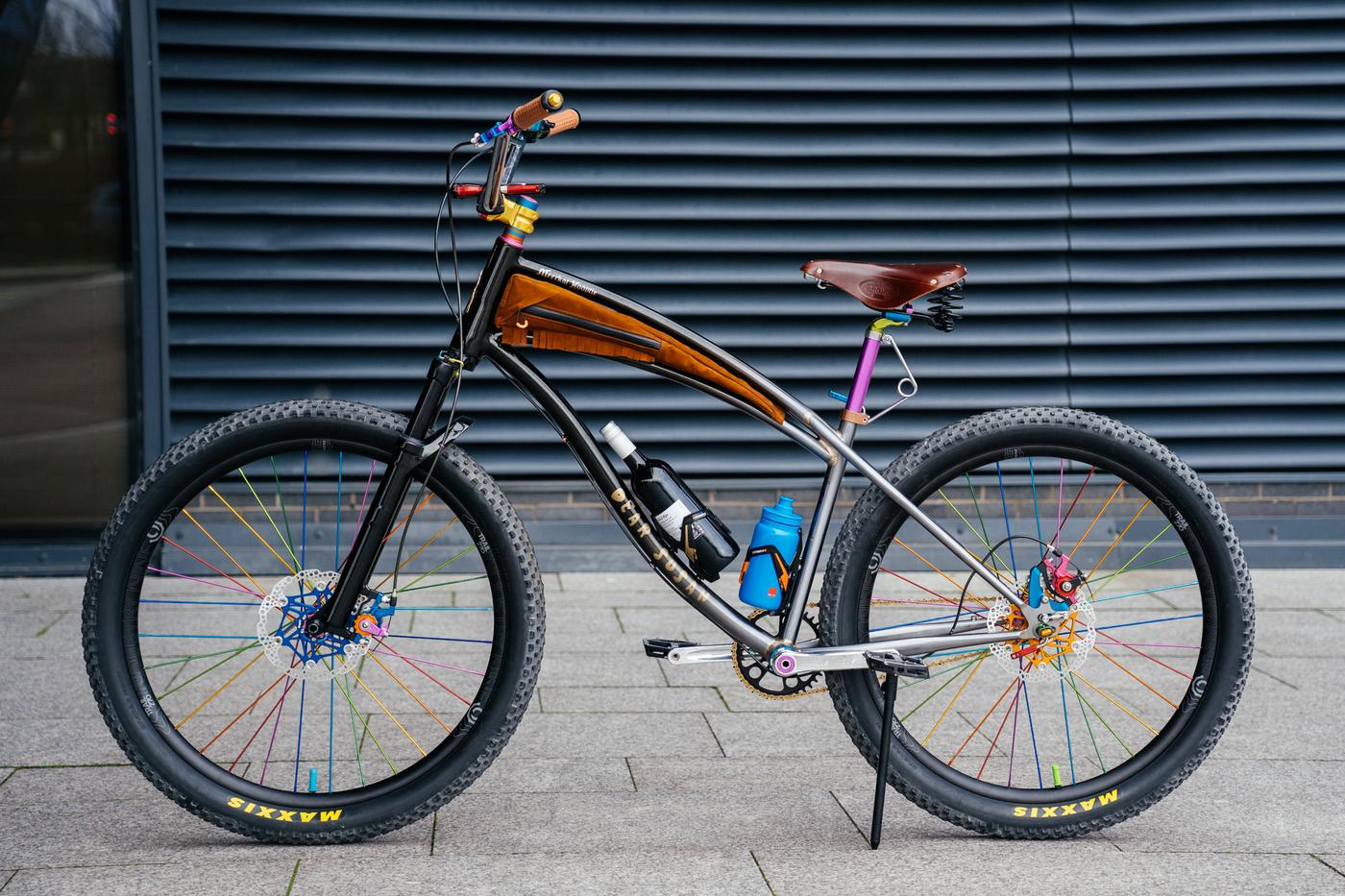 Non-drive side because hey, why not?

Everything on the Susan hooptie is made by Hope, whose new carbon fiber seat posts and bars are INSANELY WELL MADE. The weave of the carbon batches up at the seam better than a Saville Row suit! The derailleur and shifter are Shimano as the bikes were displayed at a Madison show (Icebike), and the tires are fast-rolling Maxxis Icons, which work well in the dry but are no good in a British winter woodland which is just as well because I’m neither wealthy nor mad enough to ride a bike with SUCH INCREDIBLE PAINT in those conditions. 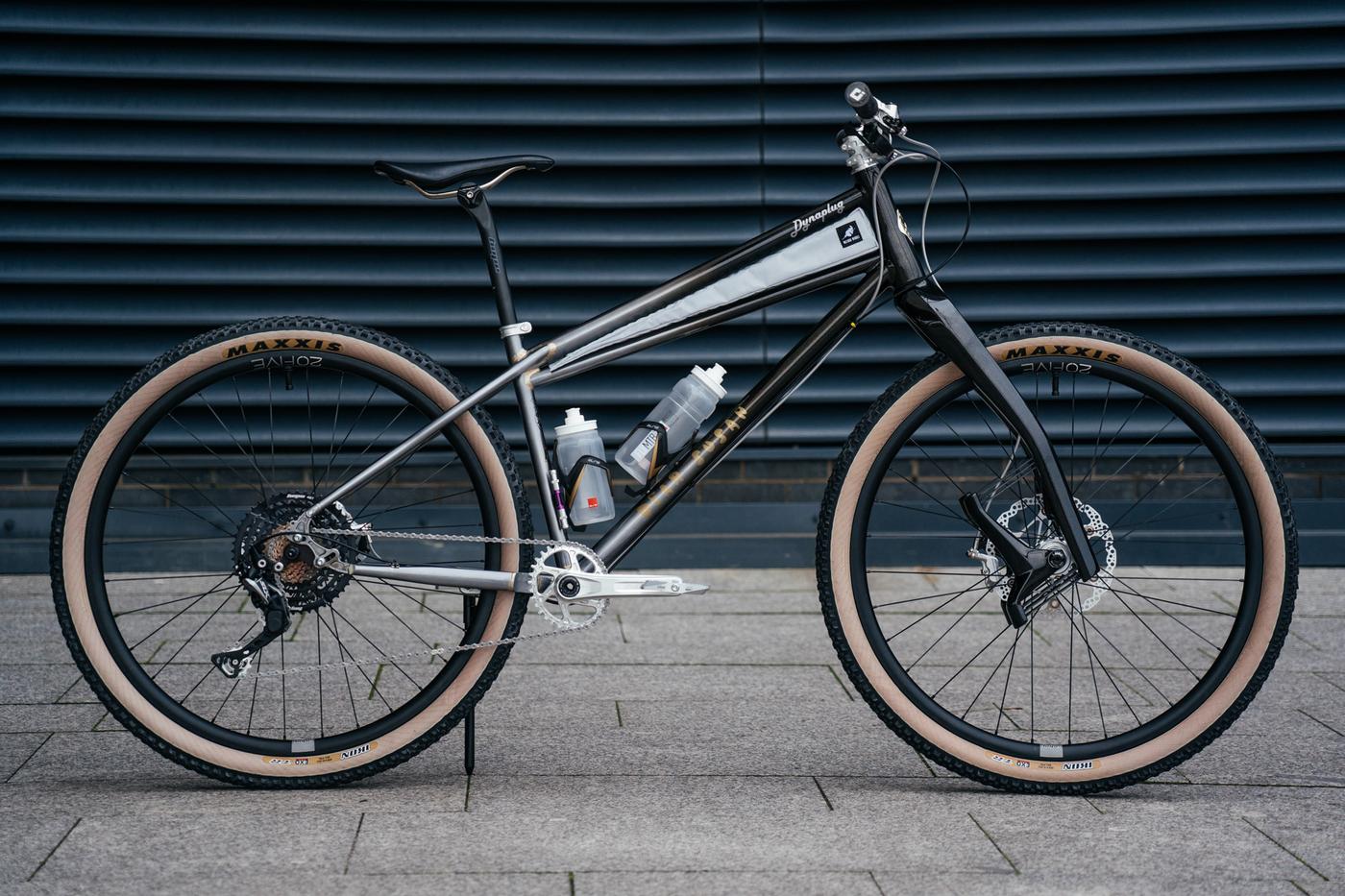 Both bikes are painted by Cole Coatings, with the most incredibly even fade from black to clear lacquer, with a generous helping of glitter all the way through. The decals are matched to the color of the brass and are so small I wouldn’t read them if they’re were on my bank statement, yet every edge is perfectly crisp and clean, as is the masking of the Dynaplug and hooptie fonts revealing the steel of the top tube. 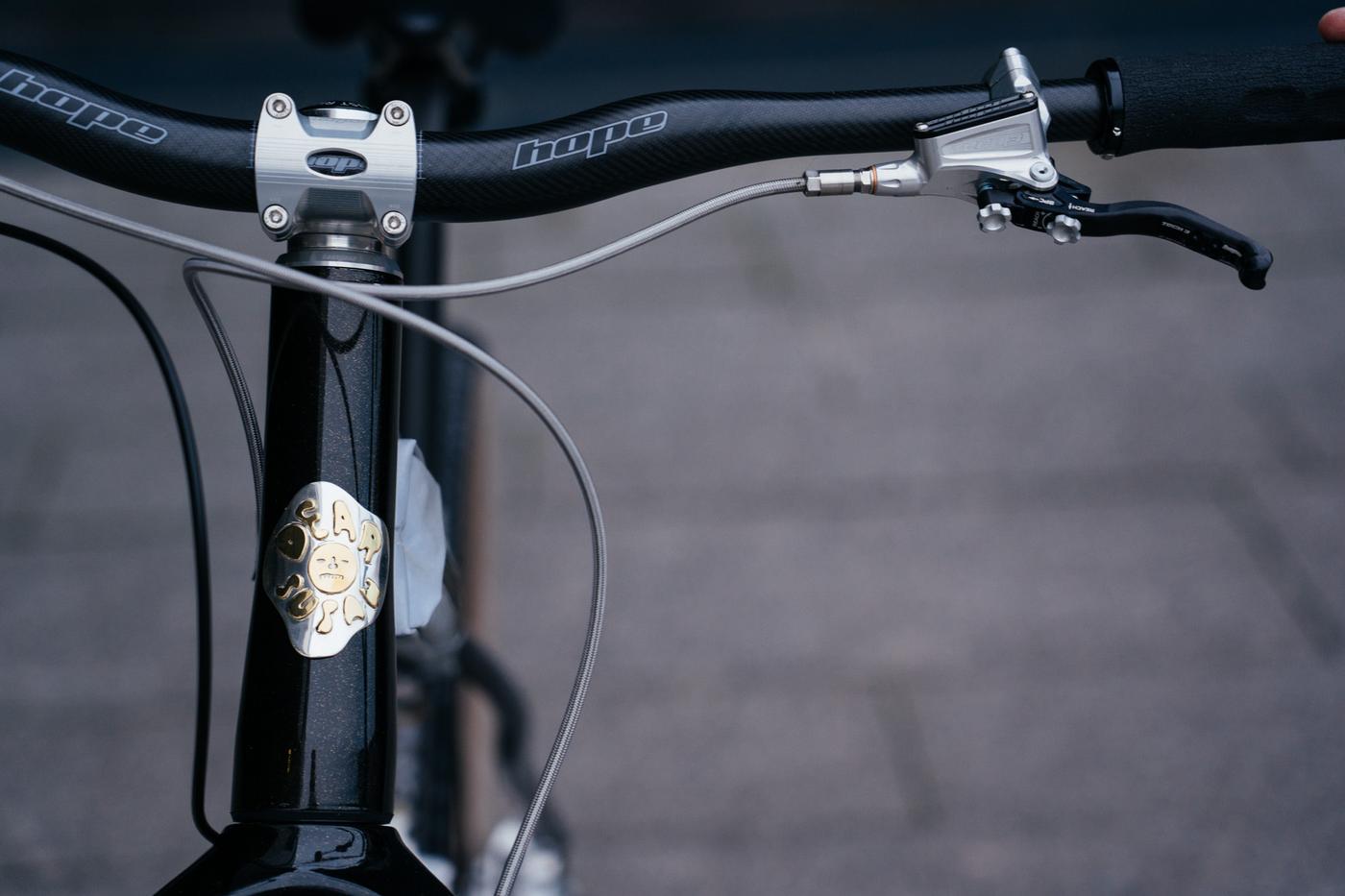 The headbadges were made in engraved mixed metals by the legendary Jen Greene, and 1.6mm silver and brass by the insanely talented jeweler and close friend Billie M Vigne. The Meerkat features the meercat drinking red wine and the other features Ing the classic dear Susan headbadge logo incorporating an angry dick nose (me) in the center.

They are super nice bikes, and I’m so happy to have worked with Dynaplug and all the contributors to this project.