My Name is Windy - Emily Heavey

Act One: We Can’t Stop Here, This is Nats Country!

In which our anti-hero-TeamLifeLOL-genderwhatever sets the stage with cold takes on Chicago-lite.

What a December it was for The Cyclocross in Chicago. I’ve seen a few different versions of this: rain and sleet off Lake Michigan for Montrose; 60 degrees (and a hot tub at both!), bitter cold and wind at Afterglow; and for USAC CX Nationals in Wheaton, IL, there was a complete fall-to-winter seasonal transition. I’ve made it pretty clear my opinions on why USAC couldn’t seem to find any venues in the ACTUAL City of Chicago. In fact, I wrote about it here! I figured I might be around town when this was not delayed by COVID. Turns out I was!

It also turns out I spent a lot of time this summer meeting folks cooler and tougher than me. I have a gig working for inclusion, access, and equity in the world of travel by bike, which means I’ve gotten to meet a lot of BIPOC/LGTBQ+/and women-identified people who really like to go on bike adventures and aren’t represented! Generally, I have more in common with them than, say, the average aspiring bike athlete. Generally. Shooting the shit is often a way to build an understanding, especially when a lot of us have been kicking around shops and group rides and events. Turns out a lot of us have tried or enjoyed or just managed to get through a cyclocross race. My theory is, of course, because CX is probably the most accessible bike sport out there in some ways. You can have it in a local park on any bike you can find.

We would punch up, ask where did the beginner, inclusive communities go? Who the heck was ruining cyclocross. Someone, right? When did everyone’s bike cost four months rent? When did handups become a crime? When did everyone turn into kind of a jerk? I mean it: talk to the beginners, the people of color, the queers and women in your life, and ask them about what they’re encountering at a CX race these days. Bizarre at best and bigoted at worst. I guess Nats held in (not)Chicago represented this to me. Maybe because one of the last CX races I did, some snotty skinny white women bitched about the “slow fatties” in the 4 / 5’s (charming) and maybe because I thought of my days in the city, with Black and Latinx youth racing, with the Lake to our sides and the skyscrapers about us, with the ability to not have to drive to a race… and I figured it was time to see things for myself. I was already mad and sort of over it. But the news stops for no queer. Vamonos! Act Two: Brother what a fight it really was. Glory be!

Saturday. I’m gonna go find pals, watch singlespeed, visit Marley Blonsky and Molly Cameron at All Bodies On Bikes, rouse/rabble. Overnight, a terrible storm system crosses the country: it has rained most of the late evening and the morning stings cold. The All Bodies ride is canceled. If I were a good journalist, I would have been checking the press communiques, but as is, I push myself to the train station on my 26er. I am warm with righteousness because I refuse to drive. On the train, I find out everything is delayed. Cantigny Park was home to the Medills and McCormicks (JOURNALISM), part war memorial, part-golf course. Wheaton doesn’t give the most stuck up Chicago suburbs a run for their money – that’d be Kenilworth, Highland Park, Glencoe, where the roadie dentists live, getting Rapha’d for the Judson Ride.

Here’s my active transportation advocate rant: it’s dicey to ride to this park from a train station. Froggering through traffic as I roll past a neon sign telling me CYCLOCROSS NATIONALS are in town makes my eyes roll. If you’d driven out from the actual City of Chicago, you would’ve seen some digital billboards basically saying the same thing. I guess that must’ve been cool from your Volvo on 290. I could never quite figure out if I was allowed to ride IN the park. Every email warned BIKES WERE NOT ALLOWED TO BE RIDDEN except on the course. Of course, you couldn’t just try out, or enjoy, the course if you hadn’t paid a $120 registration fee, which also meant you needed to pay a bunch of race fees beforehand and get your USAC license. (Which, you know, we’re all lighting on fire? More on that later).

Intermission. Relax to some Noname, American Football, Mavis Staples, and why not enjoy a cup of Rapha coffee via Milwaukee Ave. or a Chicago Handshake? 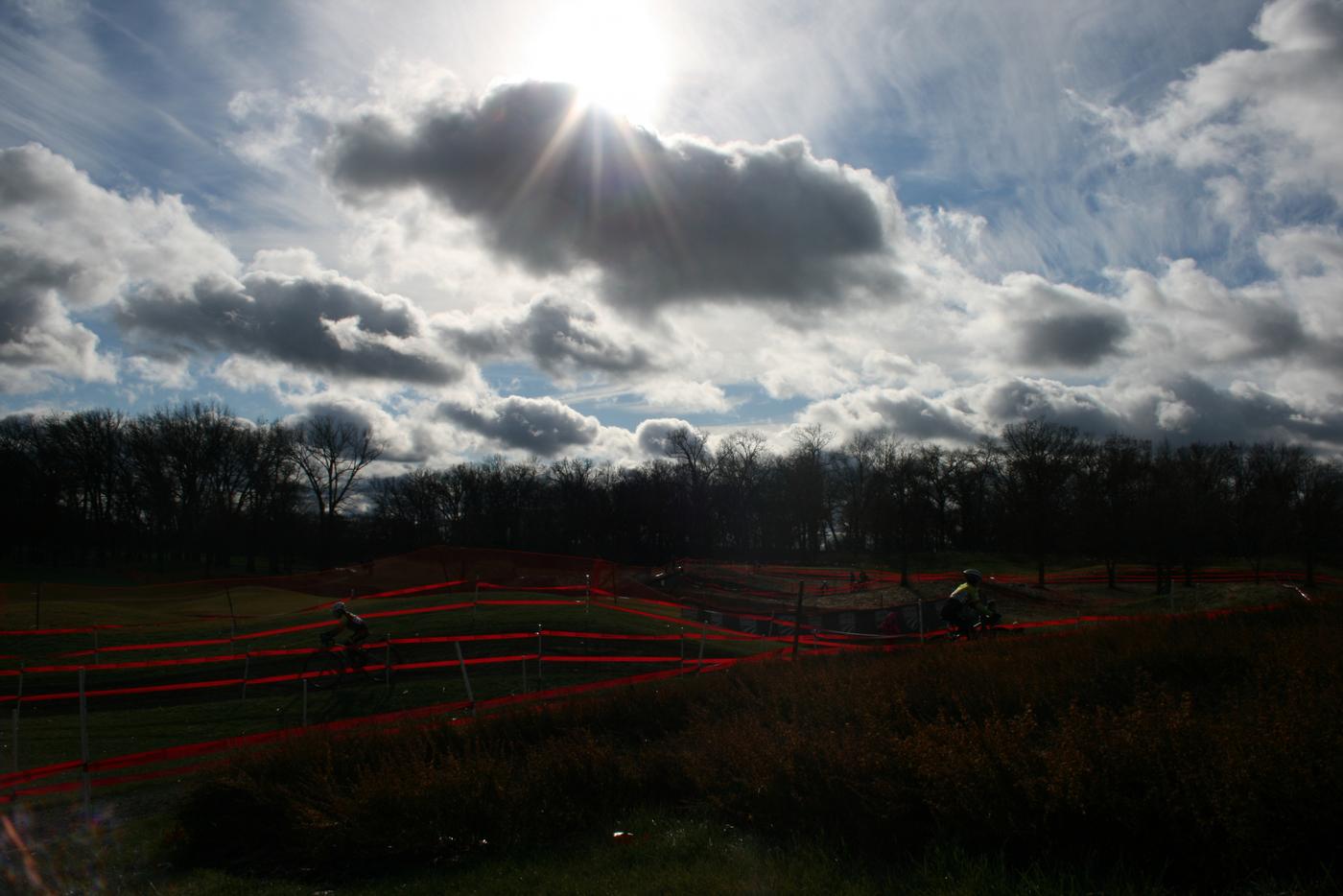 Act Three: The sunshine’s fine in the morning time, tomorrow is another day

By the time everyone is allowed into the parking lot, the sun pokes in and out. Grown, serious adults and smaller, serious juniors crowd the course entry points until the volunteers let them in. People struggle with tents. I observe teams from warmer climes, sponsors who never exhibited in the Midwest in December (Frostbike is INDOORS). I’ve worked at events where we’re frantically slinging cinderblocks and sandbags. It’s not fun. It starts to get fun. The All Bodies ride gets canceled but I walk with Marley and yell at people to come into the Shimano tent. I hardstyle with Molly Cameron and my day is made. Out of the wind, we plaintively talk about inclusivity and equity: what is an accomplice? What is an ally? A gentleman and his daughter join, reminding us we need to see more BIPOC and create welcoming spaces. More Mexicanos! he calls out and I snap YES.

It’s all happening. The sun comes. I’m trying to bop tent to tent to snap photos, crow HEY, find where we’re gonna set up our handup game, ask WHO RUINED CYCLOCROSS? I run into Jeremy, who I’ll always admire for attacking a course on a Bullitt, inquiring about my Official Reporter Oversized Microphone. In the SRAM tent, I share memories of the shops we worked at, talk beginner bike touring. Critical analysis of meme accounts. Hugs and Hi to Sam, Isabel, Brandon. I meet Austin and am stoked.

In the tent is Jeremy from Portland, who I just know is someone I want to talk to, someone who should be welcomed to Chicago. He’s from the DR, my dad’s from Venezuela. I ask him if he’s gotten to hang in Chicago and he shows me his photos of Humboldt Park and I say YES. We head to the PSIMET tent. We find a lot of Chicago – representatives from the days of Hot Tubs and bagpipe sharks. It’s warm and the turntable is playing The Specials. Jeremy says he knows Hot Tub Tony and I laugh.

There’s something there I love, again – what I chase in the work I do to build community. Remembering we’re here to take care of each other, lift each other up, and laugh our asses off together. What’s good about being just a bunch of rich, white guys on fancy bikes who only think of ourselves via rankings and points? Then: Bikes! Fast! A bunch of us run out to the women’s and men’s singlespeed, a truly terrific race. I hang out on the stairs and watch the intense trek through the wet earth. I admire every racer turning down Anthony’s Malort while talking about what it’s like to not be cis in racing bikes. I hustle across the course, which takes FOREVER – it’s a golf course. On the hill, I pound dancehall airhorn on my phone, watch the handup game. Someone told me people would be very uppity about it, and it doesn’t seem like Handups Are A Crime. We got candy, shots, beer, money. I remember I need to work at better handups beyond alcohol because that’s also not a great way to be inclusive, either.

The grass has dissolved and the cold slick is everywhere. It looks exhausting. It looks stupid as hell. It is amazing that anyone has finished this at all. More will come, tomorrow, when it’s warmer and sunnier out, It’s pretty great. Act Four – Do You Think About Me Now And Then?

That could’ve been it. Could’ve ended with: warm, fuzzy, impressed, glad. I could’ve ended up knowing how hard it is to put events like this on, shout out all the folks from DuPage and Wheaton, because the carnival is fun but mostly HARD. You deserve every accolade. I hope everyone can see we’re great. You think we’re flat, urban, flyover country. You’re sadly wrong. I believe that and hold out my hands.

Instead, my feeds fill on Monday. It starts with Molly. I email USAC which is a minor miracle because why spit into a $15-mil-revenue wind. If you don’t know: some total wastes-of-spaces going by the name Save Women’s Sports (LOL say I, AFAB and a giant fan of too many men’s sports TBH) made it onto the live-feeds and course during the weekend with hatred-filled, stupid, incompetent marketing. 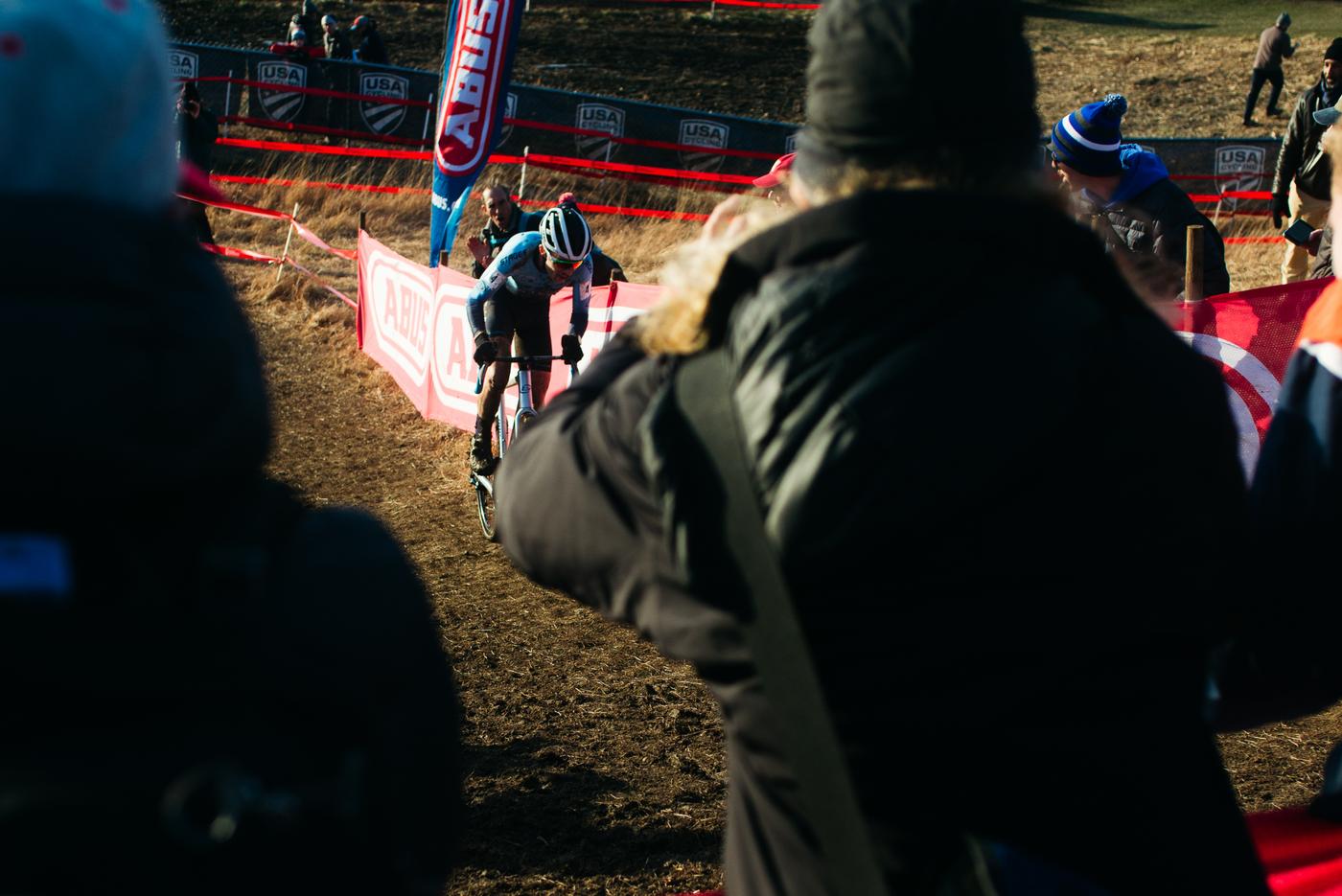 This community IS queer and trans and GNC folks, here, in Chicago. I say that because I am one. I’m here for my kin and kith riding bikes who don’t look like wealthy, cis, straight white people. I wanted to go back out there and kick some ass. But people did. You can see some amazing posts.

What USAC and anyone who had any power on that course in Wheaton should’ve done when they knew they were there would’ve been to say: “you’re not welcome here.” It didn’t happen. I did ask about it, by the way. Who ruined Cyclocross? Are you having fun? I got a lot of answers. We know this space is exclusive and inaccessible and can be blatantly full of hate. What do we do about it? We keep trying.

I can’t go back in time and say, “Hey, what if we had Nats in Wheaton AND Dan Ryan Woods AND Montrose Beach AND Big Marsh? How do we bring more BIPOC and queer youth into this? How do we let people enjoy this who don’t have the type of income to blow on a weekend riding a bike in the grass?” I still think we deserved better. If Chicagoland’s legacy is we put an absolute stop to bigots feeling safe and comfy in their silly Santa hats whilst incredible people on bikes put them to shame, that’s something.

Saturday we sat in the tent, warm, in the dark, and tried to pull everyone in we could to feed them mostaccioli and chicken and salad. It was some of how I’ve come up and been cared for: we fed who we could and laughed hard and the next day they came back to yell and cheer and create another place. Hardstyle and shoutout to racers, pals, volunteers, supporters, handup kings, visitors, and all-around Good Folks at USACX Nats 2022: Taneika, Marley, Jeremy, Jeremy, Aaron, Thomas, Jack, Emily, Monte, Avery, Molly, Nick, Brandon, Nate, Isabel, Sam, Austin, Allison, Cecilia, Jennah, Tony, Joe, Anthony, Julie, and everybody else I haven’t and can’t wait to meet. I tried my best to show as much as what really exists in the lived lives we have as I could, and I’m still missing out, and I thank you deeply.