Adam’s been working on his full-custom titanium frames for a while now and we spent a week or so hemming and hawing about titanium frames. In my experience, a ti bike tends to flex a bit in all the right ways, especially when loaded down. One of the nicest things about riding from Steamboat to Fort Collins, fully loaded, on the Moots Baxter was that the long days spent at elevation didn’t resonate with your bones as a carbon or even a burly steel bike would. Plus the weight savings are very noticeable. I kept thinking about how that bike would rule even more with a steel fork.

As a photographer and a lover of those desert hues, that means I carry a lot of weight, and unlike water weight, which can vary day to day or ride to ride, there’s no getting around the dead 10-15lbs of camera gear I schlep all over the American West. This weight, which I’ve finally figured out how to carry all on the bike, is a real burden but one that I never lement post-ride.

This bike, without bags, but with pedals weighs 27lbs on the nose. Those bars are not light either!

After much back and forth, Adam and I worked on a geometry that was tuned for my preferred style of desert touring, with a large front triangle, a slack-ish head tube angle, and a more upright riding position thanks to the new Tumbleweed Persuader Bars. 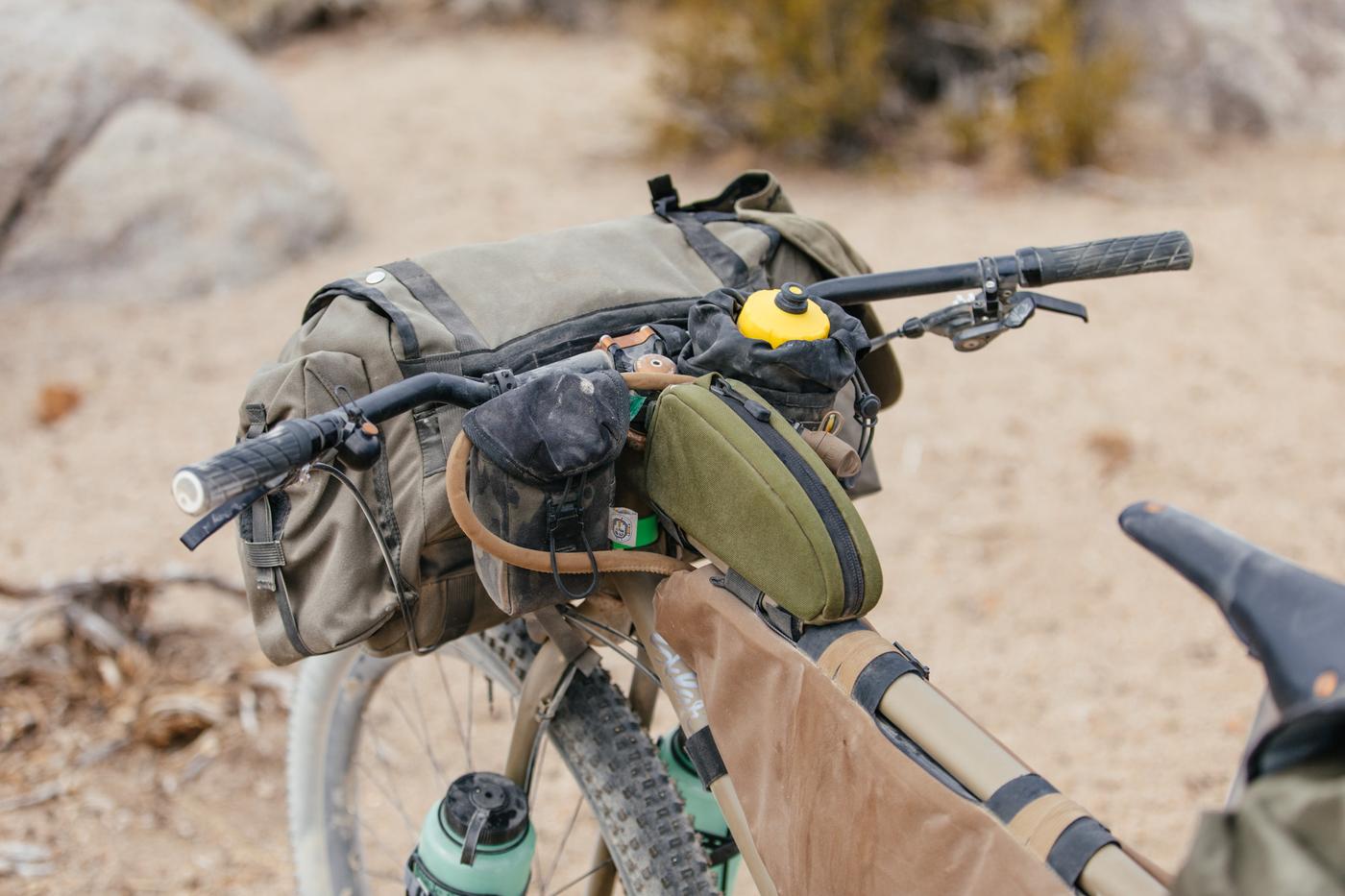 On my recent overnighter, I came across some moto tourists, who thought I strapped Renthal moto bars to a bicycle stem. These things are wide. Like, California Condor wide. I measured the end to end at 845mm, on the outside of my grips. The sweep, combined with the frame’s short steering axis, allows the bike to remain under control while alleviating fatigue. Even in a headwind, I found the riding position to feel comfortable, while not feeling super upright.

In terms of handling, the steering is easier with a wide grip, even with heavy bags, especially through deep sand. Cornering benefitted from the added leverage, and best of all, climbing allowed me to really hulk it up steep doubletrack. If the wind picked up, I would rest my forearms on the bars and pedal. People asked about the width but I commented that a wider grip is easier when pushing weight. Think about bench presses. You want your grip to be wide. Then, the area adjacent to the stem clamp is flat, allowing to strap bags easily on either side of the stem and minimize turning limation.

Overall, these bars really tied the room together for this bike. 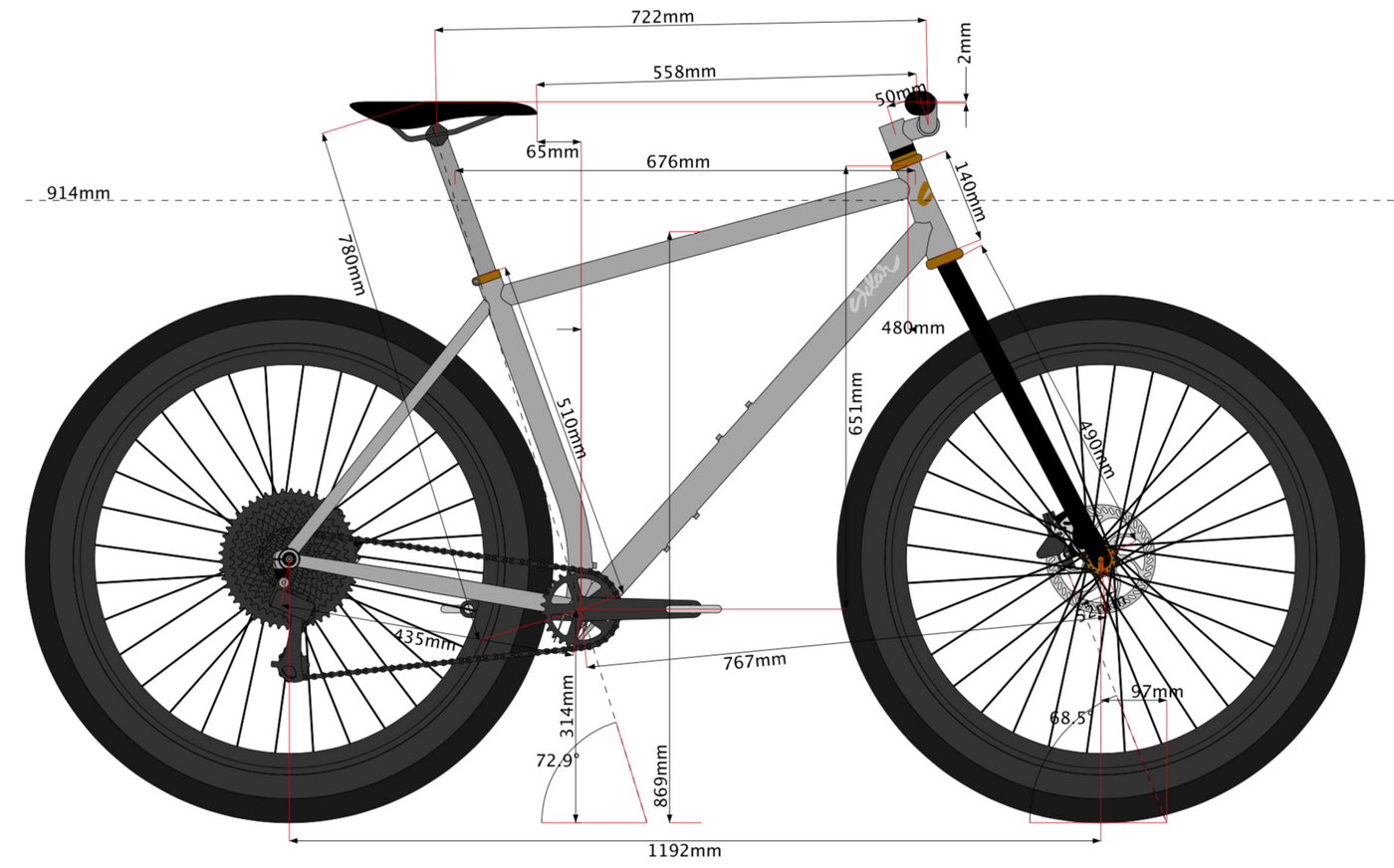 For a guy with a 36″ inseam, a short, 11.5″ torso, and a 6’5″ wingspan, getting the right fit is harder than you’d think. My gangly moose legs like a slacker seat tube angle to allow my hips to open up while riding and rounding out my short back always feels weird and uncomfortable on a flat-bar bike.  Since it’s so short, even the slightest bend can cause fatigue during long days. Yet, my arms are so long that extending them too long makes me feel like I’m bent over. The biggest thing that took me a bit to get used to was the reach of this bike. On paper, it looks long, yet after a conversation with Jeremy from Sycip bikes and Max from 333Fab in person, they assured me that I was very upright still. Sometimes it just takes a bit of encouragement to feel comfortable. It’s largely a mental game.

The hardest thing about riding a new custom bike is shaking off bad habits you made by riding bikes that were too small for you. I sold off a few flat bar bikes this year partially to help pay for this bike and to cull my stable down. 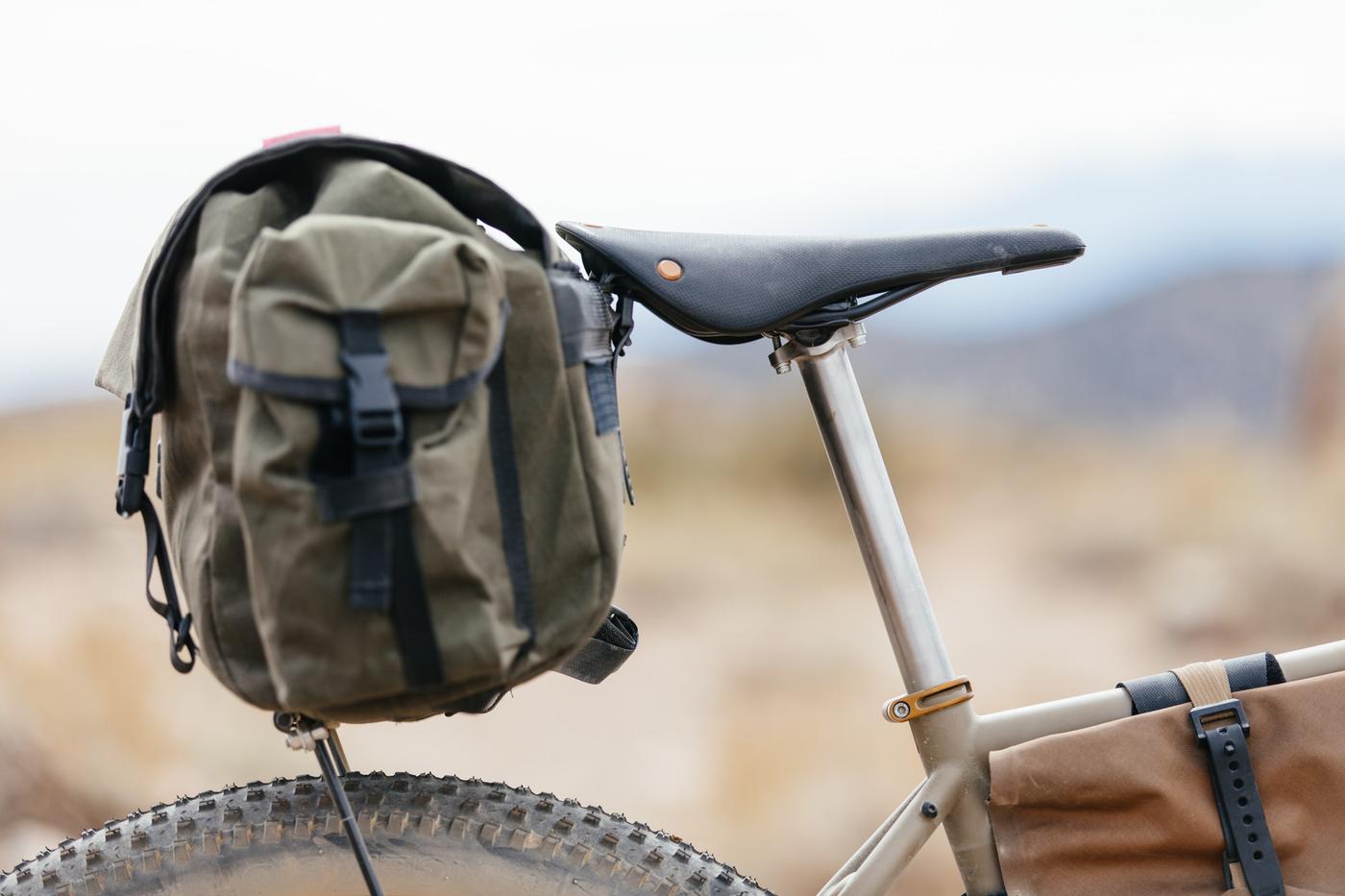 I tried something different this trip, relying on two Fabio’s Chests and a Porcelain Rocket frame bag, which was custom-tailored for my Hunter,which was a bit short on me,  hence the 2″ gap at the front of the bag. While I’m used to a long saddle pack I was curious to see what it felt like to have the weight a bit higher up in the back, thanks to Kevin from Golden Plier‘s handy bag support system. Inside this were my bedroll, stove, and camp meals. On the front, the size large Fab’s worked wonderfully, actually holding my Canon 5D, 24-70 and 70-200mm lenses atop a pile of warm clothes and snacks. This move was a game-changer for me. It was the first time I’ve toured without a camera pack on! 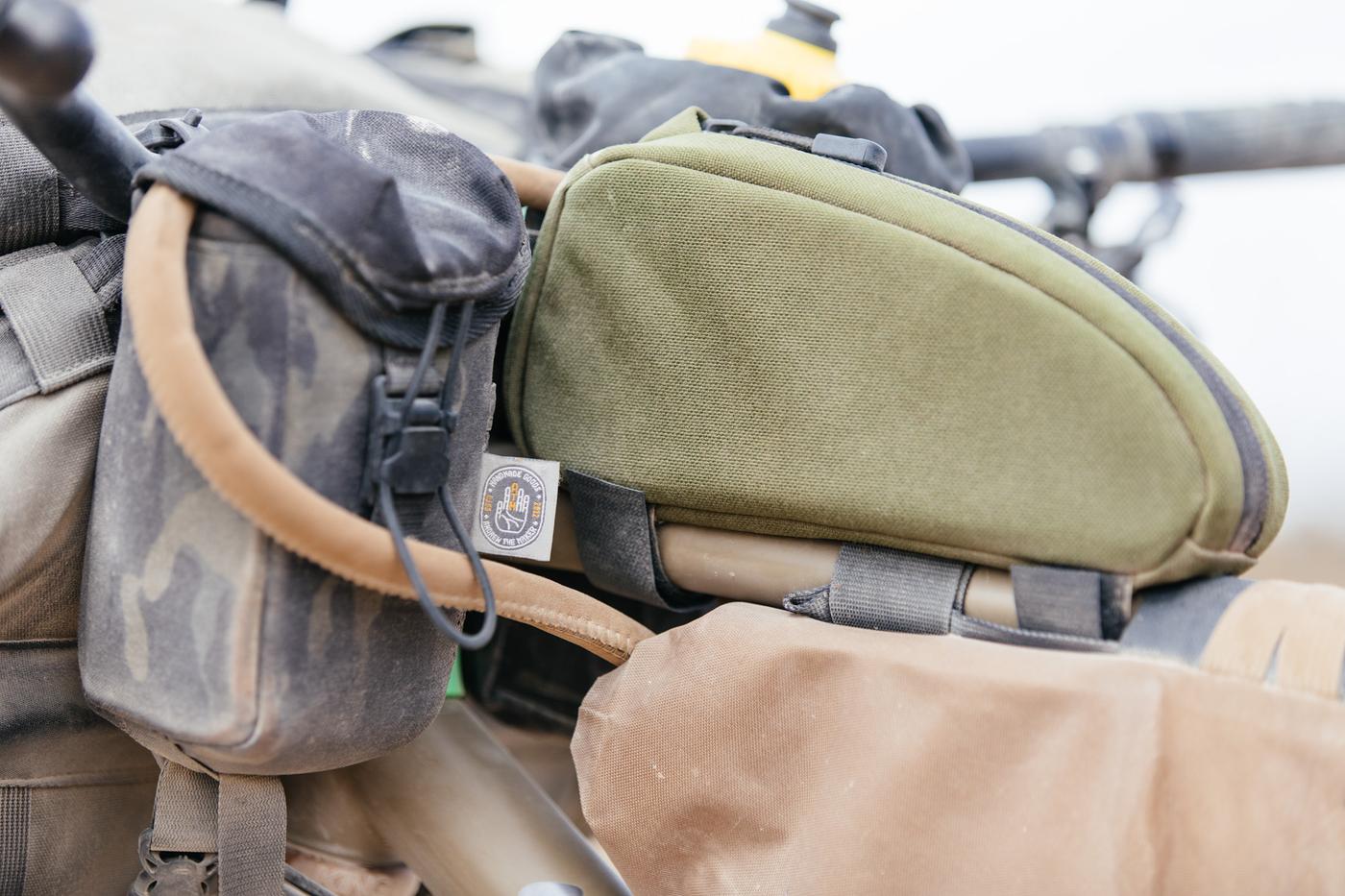 Snacks were carried by my favorite Andrew the Maker Little Hatch magnetic closure bag and a Cedaero Tank Top bag, alongside an Outer Shell Stem Caddy.

Water was resolved, all 10L of it, by two water bladders, two Nalgene bottles, and two Purist bottles, one on the cockpit and the other stashed in the frame bag. The method of rotating weight came as follows: drink the cockpit bottle, swap with frame Purist bottle, then refill both with one bladder. Repeat until emptying both Nalgenes. An MSR filter was on hand for the second leg of the trip which would meander around various rivers and springs.  While 10L was a lot for this particular route, it’s good practice to carry more than you need for desert touring. The route boasts a 30-mile climb, which under the wrong environmental circumstances, could easily drain you of your water supply. I lucked out with overcast skies and still drank 9L of water over the course of 6 hours. 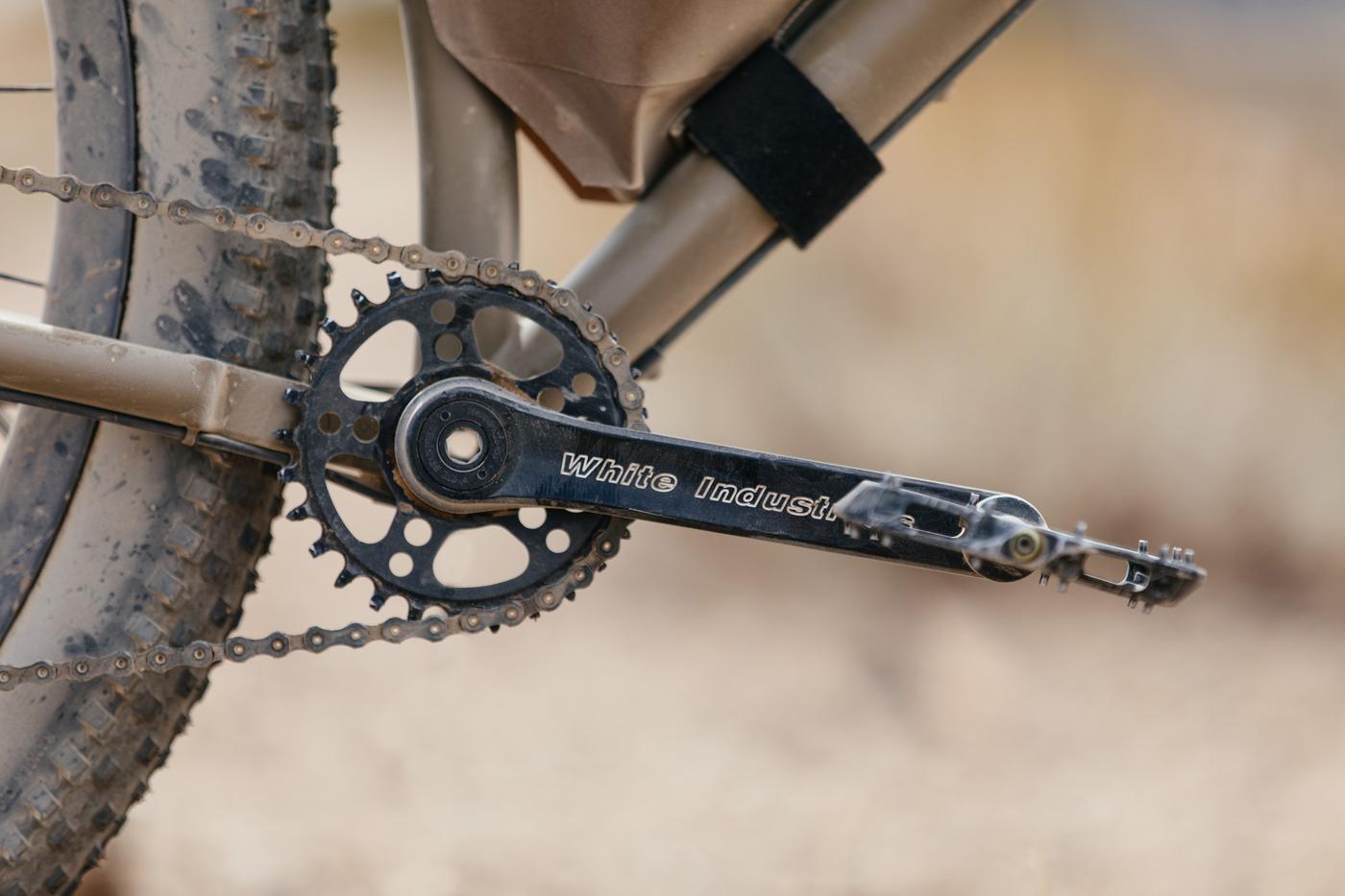 Personally, any MTB I tour on uses SRAM Eagle 10-50t and a 1x drivetrain with a 28t chainring up front. It’s what works for me, allowing for plenty of spinning on the ups, while still having the gear inches on the descents, especially on a large diameter wheel like a 29×3″. Since this bike was on display at the Chris King Open House, it got decked out with matching Bourbon components, including a Super Boost (157mm) rear hub.

Why Super Boost? Why not? One of the main issues with my plus bikes with short chainstays is a less than ideal chainline. It plagues a lot of my bikes. Super Boost puts the cassette further outboard, allowing the cassette to align itself in a more efficient way. Is it noticeable? Oh yeah. The 50t chainring doesn’t sound like it’s grinding anymore, even covered in drivetrain-destroying volcanic silt and sand. The Chris King hubs are paired with ENVE M630 rims, built strong and still light to offset the rotational mass of the WTB Tough Ranger tires.

A shorty 35mm length PAUL stem places the Persuader bars perfectly in line with the steering axis and PAUL Klamper brakes and levers bite down on those big boy rotors, bringing this Sand Worm to a skidding stop. Adam then made a 0mm offset titanium seatpost to further add to the silky-smooth ride of this bike. When it’s not in touring mode, I’ll put an AXS Reverb on it to up the fun factor. 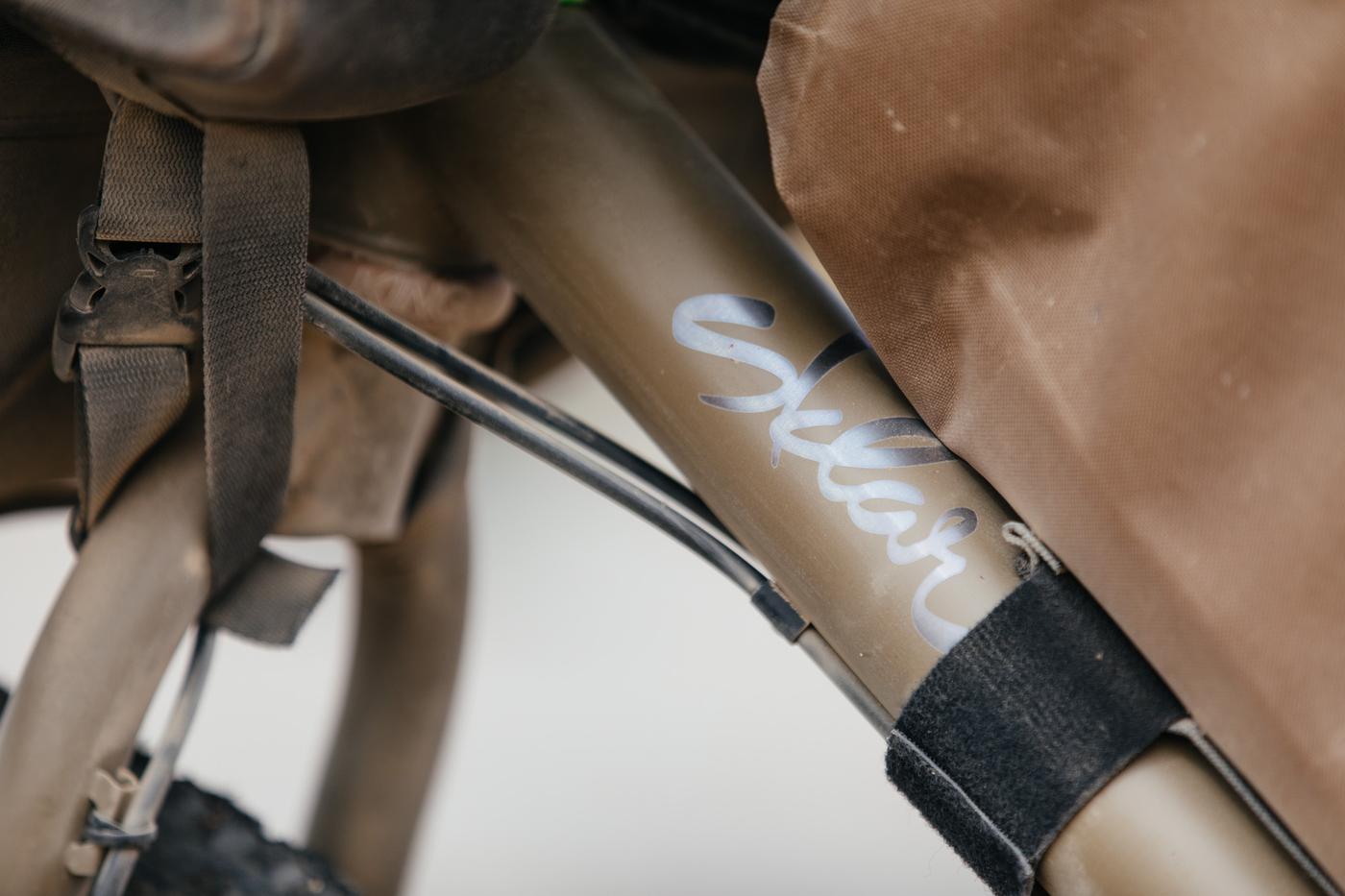 Embrace the left hand path. I’ve known Rudi from Black Magic Paint for a while but haven’t ever had something painted by him and Ben. Then they offered ceramic coating. I chose the coyote color, which Rudi and Ben painstakingly applied to the titanium frame, masking off the logos in a razor-edge fashion. My thoughts were, the bike would patina over time, showing the raw titanium after being worn away by pumice dust and bag straps. Those Chris King photos are the cleanest this bike will ever be. 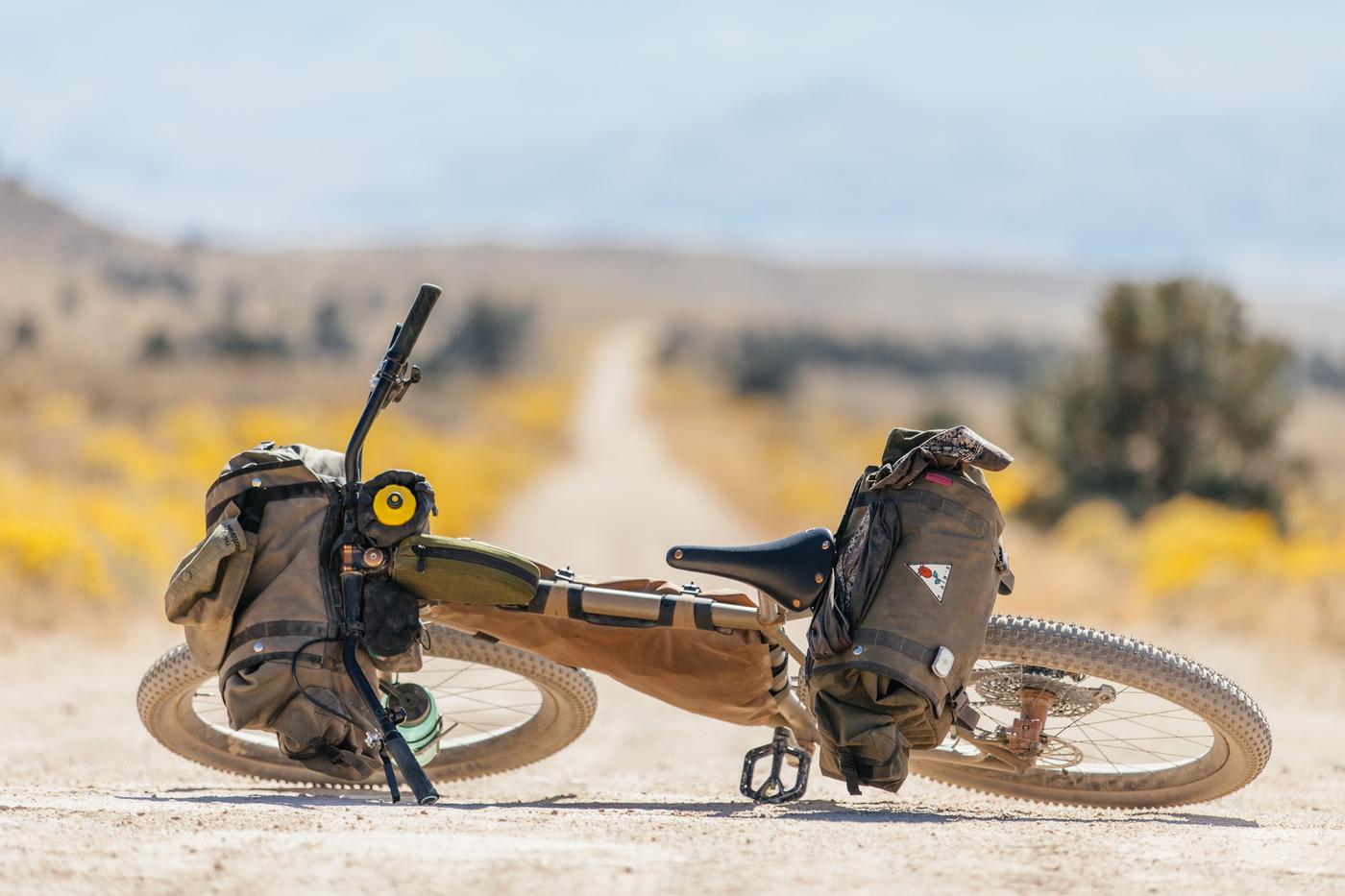 Look. This was not a cheap bicycle. The frame was $4200 and the rest of the components, nor the finish was what I would call cheap. The only way I could afford this bike was by selling off redundant machines. I really felt like titanium was a massive upgrade, warranting the culling of my bikes. What I will say is when you hop on a loaded titanium bike – even with that masssssive downtube – it takes a bit to get used to. It’ll be interesting to see how it handles with a traditional bikepacking bag on the rear or front-loaded with panniers. The side to side motion and flex in the frame felt fine on the climbs but it wasn’t until descending washboard and sandy roads that I was hooked. This thing surfs corners and gobbles up the washboard. With 15psi in the tires and the compliance of the frame, it moved like a snake across the alluvium. Describing this sensation is hard and ironically, it’s anything but hard! 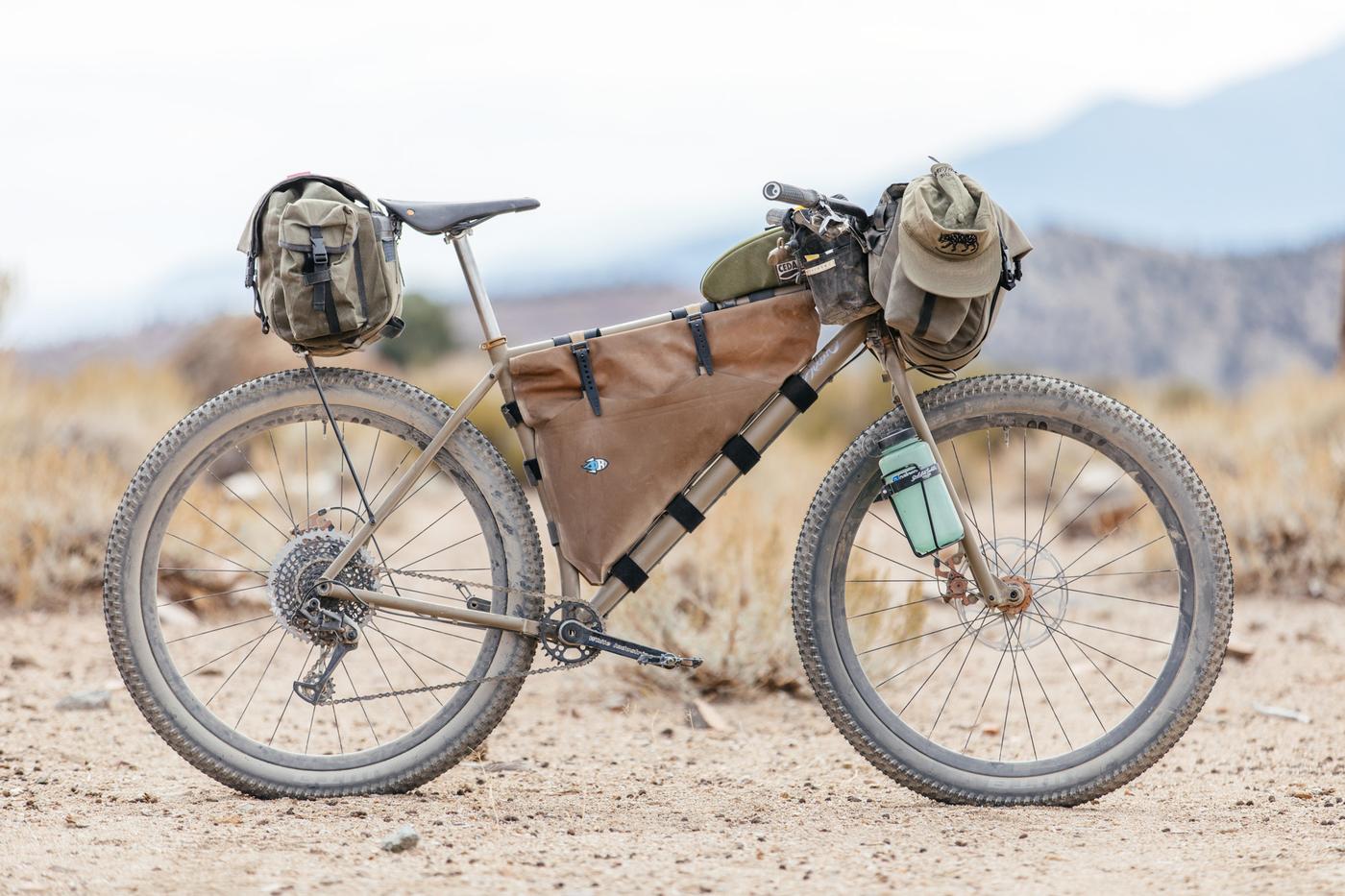 Making a big move like selling off some of your favorite bikes is scary but the end result is exactly what I wanted. I can’t wait to put a dropper on this thing and boogie on my local trails and with the bikepacking trips I’ve got planned for the desert this winter, this bike will get even more use.

For now, I’d like to thank Adam Sklar, Rudi and Ben at Black Magic, all the brands who supported the Chris King Open House and Jay Sycip for anodizing that Super Boost hub. I owe ya one for that!

Got questions? Critiques? Drop them below in the comments!