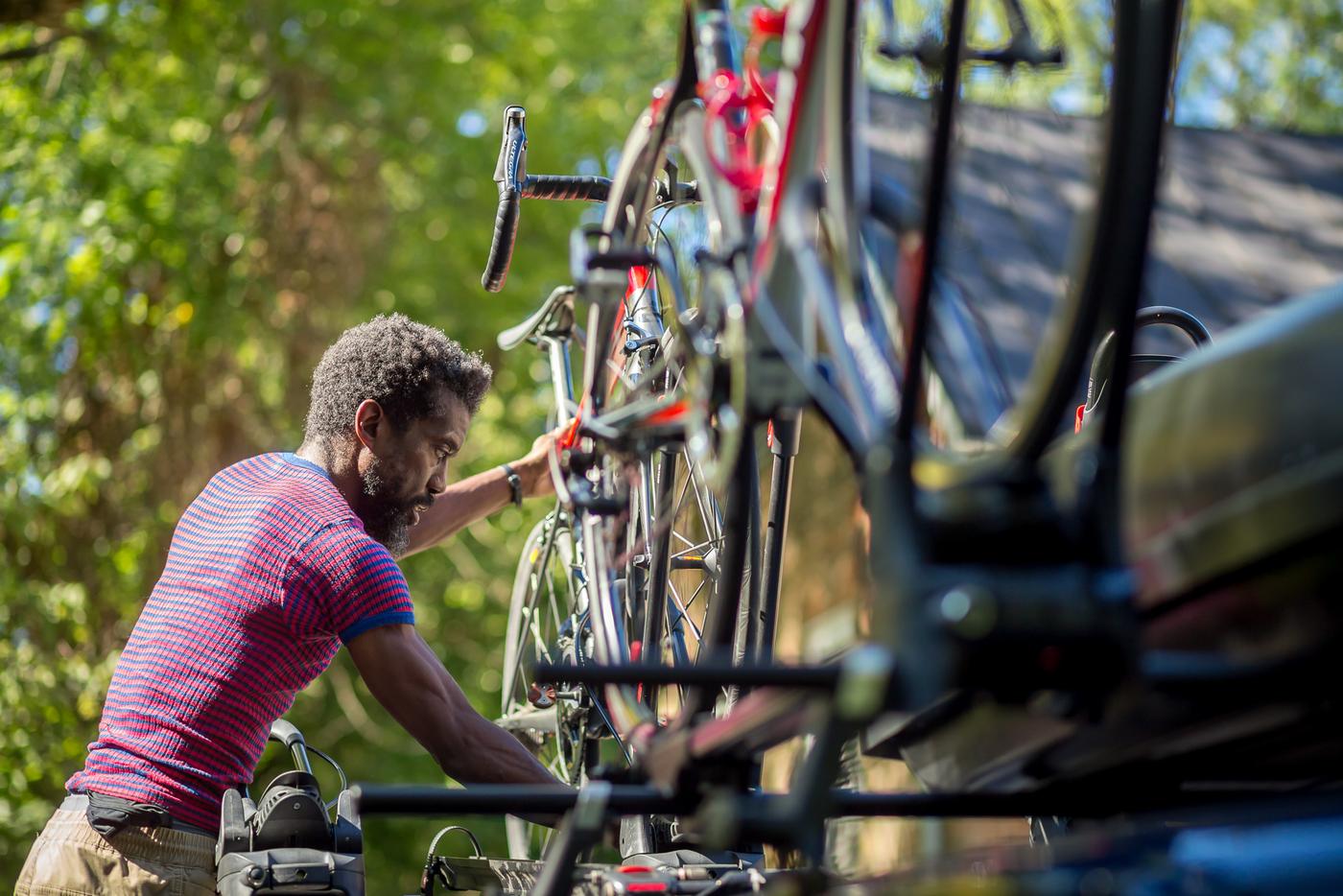 For the past four years or so, I’ve found myself returning to Bluemont. I pack my big blue van with fellow city dwellers and our bikes for weekend excursions around my mother’s hometown in Loudoun County. We spend hours pedaling along the many rolling dirt roads through tiny one-street towns called Unison, Upperville, Philomont, Paris, Trapp, Aldie, and Bluemont.

These narrow dirt roads are lined with dry stone walls. Stones placed on top of one another for miles upon miles, interlocking like a puzzle, bordering forests and guarding fields. My grandfather put his own hands on these stones, so carefully chosen and placed to allow these walls to remain standing over half a century later. Stonemasonry was tough work but my grandfather had few other options to put food on the table. The walls remind me of his hard life and the continuity of legacies often overlooked. 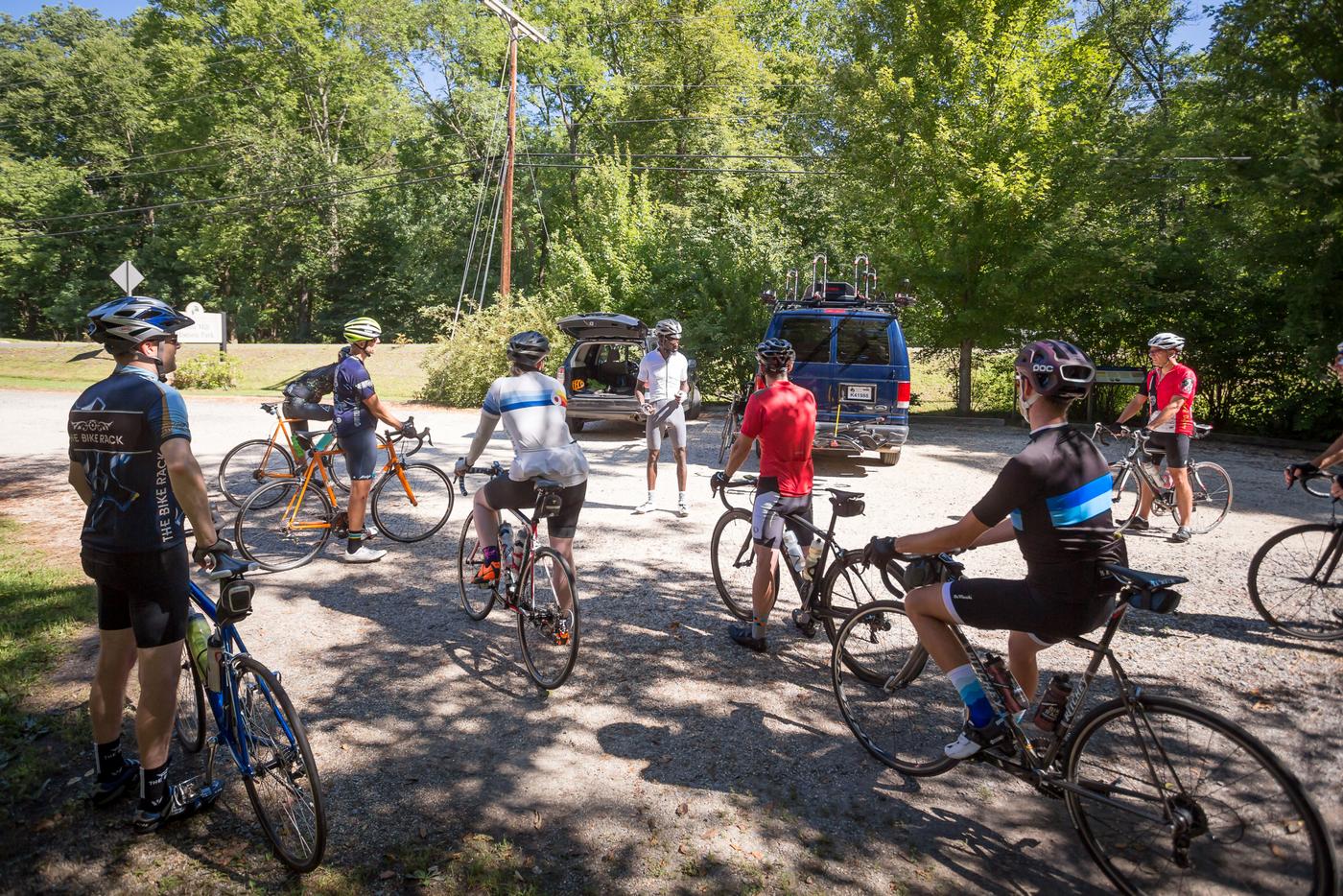 Straight paved roads between the small towns are mostly avoided so we can zig-zag our way through as much gravel as possible, before returning to the city with tired, dusty legs and empty water bottles. A usual rest stop in a town called Middleburg is the only place that outsiders recognize. It’s sleepy but surrounded by large country estates, farms and stables filled with prize winning horses.

My mother didn’t come from money. Her mother worked as a domestic in a nearby home of those who had it. She was proud of her large family, the surrounding community of pious African Americans, and her country upbringing. But she never thought that any outsider would realize that Bluemont existed. 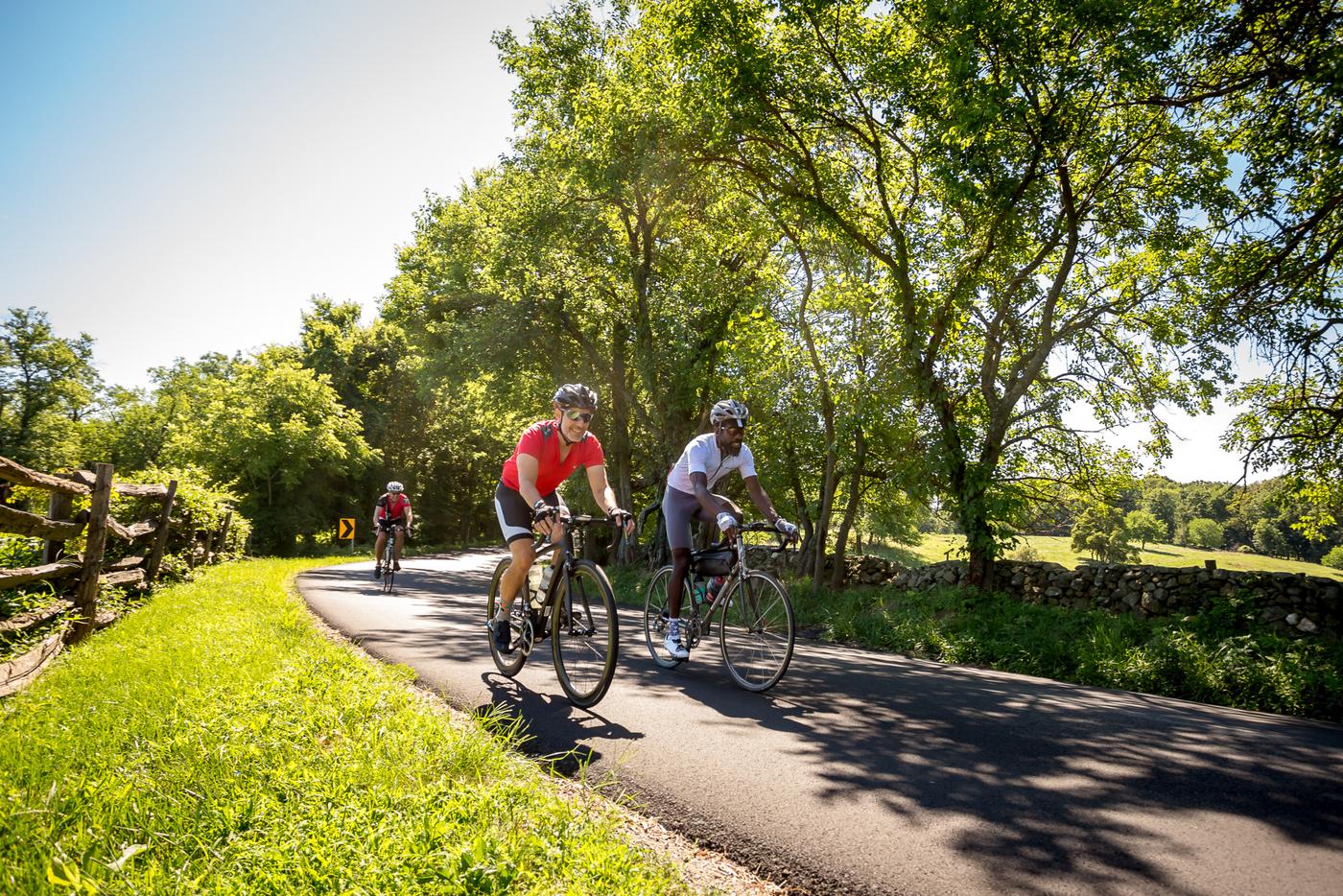 In the early sixties, Mom was living in D.C., working in an ice cream parlor on 11 Street NW. One evening, a shy but frequent customer saw it was raining outside, and offered her a ride home. Mom was reluctant, uninterested in conversation during the ride. After some prodding, she told him she was from Bluemont, Virginia, and to her surprise, he could name its crossroads. He couldn’t explain the exact reasons for his knowledge of this little place but he took the coincidence of their mutual relationship to the town as a sign. Some years later I was born.

I was nine when my dad brought home a French race bike from his office at the Pentagon. The little blue Gitane had belonged to a co-worker’s daughter and was just my size. I was the only black kid in my neighborhood and one of only a few kids with a ten-speed. Weeks later, a knock at the door came with an invitation to join a road race put on by the older kids down the street. It was a suburban criterium loop involving one long driveway, a cul de sac, and three racers. I took second after the other teen crashed out in the cul de sac. A Mongoose BMX came later, and both left a huge, bicycle-shaped impression on me. As an adult, I spent years obsessing over mountain biking, road cycling and racing, before becoming hooked on gravel riding. The bike-touring business I started with my wife in 2015 took us on frequent visits to the little towns around my mother’s birthplace. The roundabout way I became so familiar with the region is not unlike the winding roads we ride.

Mom was tickled to hear of my cycling adventures around Bluemont. I’d tell her every time I took a group of riders by her childhood home, the one room building that served as her primary school, the home my uncle built for himself, the church my grandfather helped build the town my great great grandfather founded. Every trip up Mount Weather, I’d report back to my dad. He’d respond with a half-joking warning not to get too close to the mysterious tall black metal fence stretching for miles along the paved road up at the top. Although the Appalachian Trail passes through the mountain, it isn’t known as a destination. The rugged gravel road to the top offers an exhausting and miserable type 2 sort of experience as you gain elevation. The paved road showcases that uninviting fence. Neither road offers views of the valley below. Any way you look at it, Mount Weather seems completely unremarkable.

One foggy night in 1974, TWA passenger jet 514 tragically struck the side of the mountain. All 90 people on board perished. The next morning, as local news crews descended upon the crash site, it quickly became clear that Mount Weather was less than ordinary. Military personnel restricting access to much of the mountain and parts of the crash site had people scratching their heads. As a child, I heard my uncles mention the plane crash during family reunions at my grandmother’s home. I’d peer up at the mountain through binoculars from the backyard half-expecting to see some remnant of a wing wedged in a tree. All the while, I knew nothing of my dad’s special relationship to the mountain. Dad was a tall, quiet presence among the rambunctious men at my mothers’ family gatherings. A curiosity to my mother’s nine brothers, he didn’t work with his hands and never wore a uniform. He didn’t know how to plant things, harvest things, or shoot things. He said little about what he did for a living. Born and raised in Oklahoma City, his employment migration to the mid-Atlantic was uncommon for people like him.

In 1957, the Soviets shot something the size of a beach ball out of the Earth’s atmosphere and got it to orbit the planet for three entire weeks. The announcement of the Sputnik space satellite had President Eisenhower more than just a little concerned. If the U.S. was serious about its own success with space-bound projectiles, more brain power was required. His administration understood that racism was not a valid justification for taking second place to the Russians and an urgent push was made to recruit talented Black mathematicians. One of those Black mathematicians was my dad. Out of college in 1960, he was hired to develop computations in a hidden facility on Mount Weather. At the time, computers took the space of entire floors and hours to process the kinds of calculations our phones can now perform. Humans actually did the bulk of the mathematical work amidst the hum of cooling fans, clicking magnetic data tape reels, and the noise of matrix printers. Also located on site were underground bunker accommodations for America’s top civilian leadership during the cold war, in the chance of a nuclear warhead exchange between the world’s most powerful nations.

Whenever I find myself pedaling up Mount Weather, my wandering thoughts take me to a story my dad told me about a dark cold night in October of 1962. My father was on the other side of the tall fences, working late in a windowless underground office. Suddenly, he and his colleagues were told they had a few minutes to make what might be their last call to loved ones, before an emergency briefing. 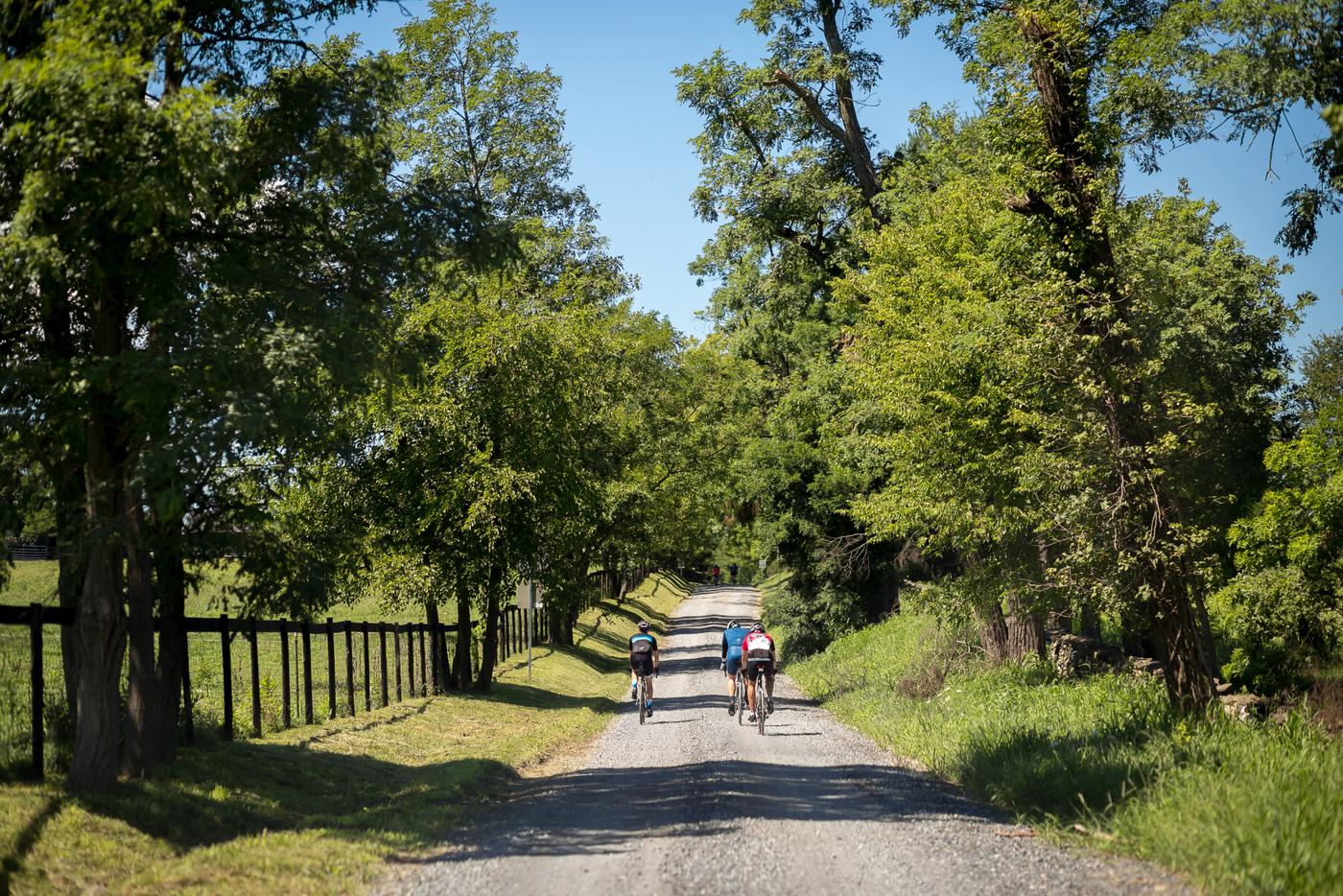 My heart rate is soaring and I breathe heavily when I near the peak of that road climb, as the satellite towers come into view. I try to imagine my father’s thoughts and his own breathing as he dialed home to parents who had no idea what their only child did for a living.

Turns out, it was at the peak of the Cuban missile crisis resulting from the 1961 Bay of Pigs disaster. The United States failed to install armed soldiers on Cuban soil in an effort to take down the new socialist revolutionary government. Soviet leader Nikita Khrushchev responded by deploying ballistic missiles to the Island after a secret meeting with Cuban leader Fidel Castro in July of 1962. By October, President Kennedy had an enormous decision to make, with the understanding that Moscow’s nuclear missiles were being installed much closer to American targets than ever before. On October 22, President Kennedy ordered a naval blockade to prevent more missiles from reaching Cuban soil leading to the highest level of tension between the world’s largest superpowers and the closest we’ve ever come to a nuclear exchange.

At the time there was no direct line of communication between the world’s leaders in Moscow and D.C. The controllers of these nuclear arsenals had only a few minutes to guess what the other was prepared to do in the event of provocations. It was at 7pm that night, that Americans were informed that nuclear war was an imminent possibility. 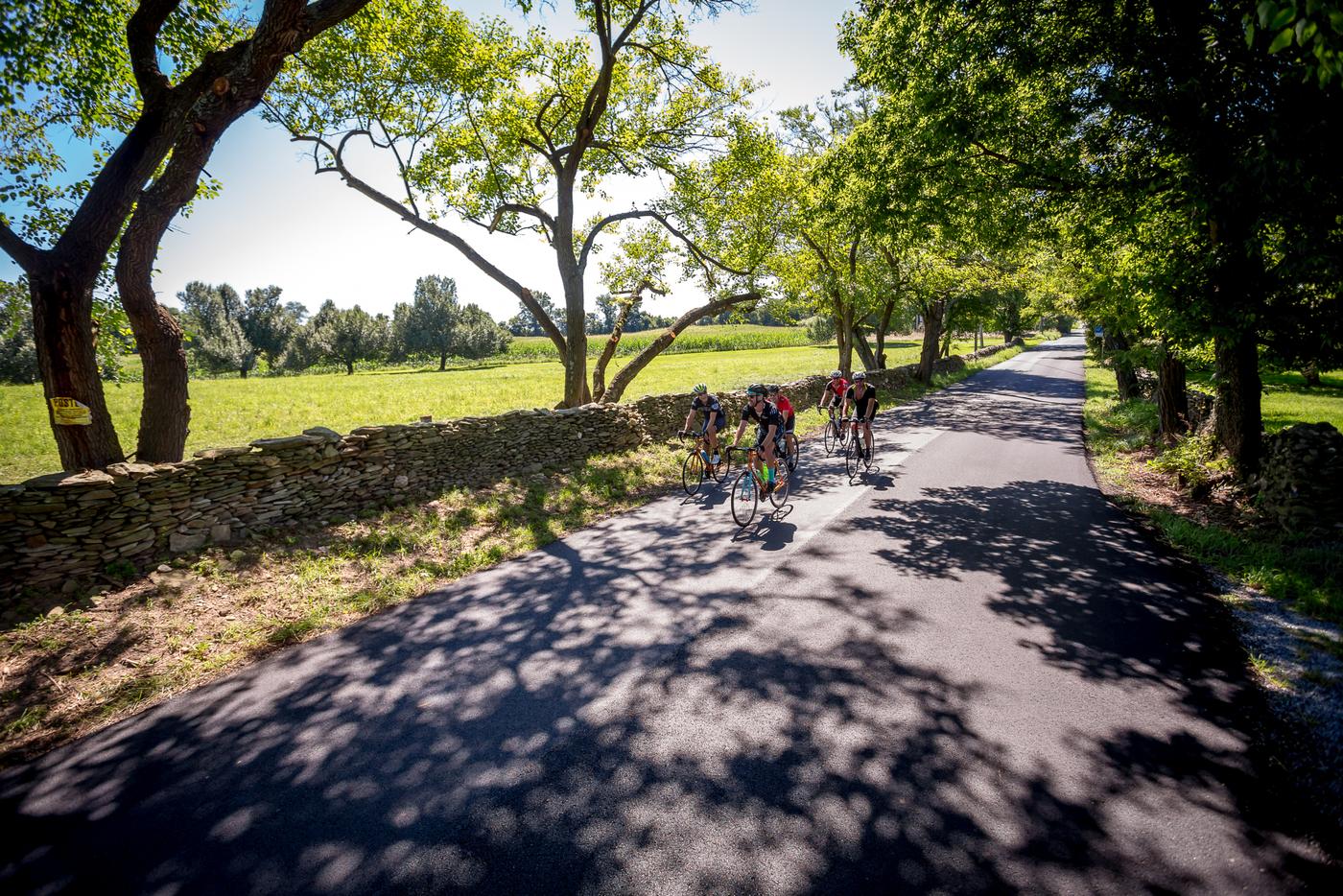 At the briefing, my father received an assignment to determine how soon Washington would be affected by radiation-contaminated winds in the event of a warhead exchange. Early long-range missiles carrying nuclear warheads weren’t estimated to be particularly accurate. The nation’s capital, and perhaps other densely populated areas, might be spared from direct hits. But deadly radiation, carried by the wind, could still reach major cities. My dad’s projected weather models would provide a likely timeline of the inevitable mass tragedy.

Dad picked a random place on the map for a potential Soviet warhead strike. They could have landed anywhere. His finger landed on a place in the Southwest, far from the central government command but firmly on U.S. soil. His models suggested it would take three days for winds carrying deadly radiation from a blast somewhere in Nevada to reach Washington, D.C. A closer but still indirect hit meant even fewer days or a matter of hours before Washington became uninhabitable. His findings were quickly delivered to the room where President Kennedy and his generals were weighing the fate of the world.

Despite the recommendations of his Secretary of State and Joint Chiefs, President Kennedy decided against an assault on the Cuban missile sites. That week of extreme tension ended with an agreement between Washington and Moscow to stand down and de-escalate the conflict by withdrawing missiles from both Cuba and Turkey. There were multiple moments during the week that could have triggered an exchange of warheads between the nations. By Kennedy’s decision to not launch first, an estimated 200 million lives in North America alone were spared from an apocalyptic war. When I reach the top of Mount Weather, my mind plays out the short conversation between my father and his parents on what could have been their last. I always feel a sense of relief after the steep descent from the mountain as I return to the valley roads below.

Dad retired from the Department of Defense in 1995 after spending most of his career focused on communications technology that kept the Cold War cold. For him, the mountain is a distant memory and just a place he once worked. The facilities on Mount Weather are now officially listed as FEMA’s, and the old secret of the bunkers has been out for years. Rumor has it Vice President Cheney was flown there during the 9/11 terror attacks. If you’re fortunate enough to find yourself riding along Loudoun County’s remarkable network of gravel roads and you notice the unremarkable little mountain, take a moment to consider its place in history and some of the actions taken there. They could be among the reasons we’re all still here.