Katja says, in Slovenia when a family has salad for dinner, they all eat from the same bowl. The bigger the family, the bigger the bowl. One person gathers vegetables from the garden– green leaves, fresh beans, tomatoes and cucumbers, onions and herbs. One person chops them up. One person dresses the salad with oil and vinegar, salt and pepper. One person tastes it to make sure it’s just right. They place the bowl in the middle of the table and everyone digs in with their own fork. There’s the usual family back and forth– who’s eating too fast, who’s picking out only the best parts, who’s pushing down too hard with their fork. When the vegetables are all gone, someone picks up the bowl and drinks the juice.

When I think of our route-building project in Slovenia for the upcoming 2023 Komoot Women’s Rally there, and all of the people that played a role, this story sticks with me. Most great ideas come during bike rides– or maybe with our heart rates high and the wind whipping past, the world is right and everything is exciting.

While climbing the Col de l’Izoard during our first Women’s Torino Nice Rally last September, Rachael suggested that we plan a women’s rally in Slovenia. She had great memories of mountains and mountain huts, delicious home-cooked food and rugged beauty. She talked of swimming in streams and stopping for cold beers. I’d never been to Slovenia, but it looked like a great combination of cultures– the Alps in Eastern Europe. The purpose of the Komoot Women’s Rallies is to create an opportunity for women from around the world to come together to ride a challenging route and share the experience. We limit participation to 50 women to maintain an intimate feeling and not overwhelm the small towns along the way. The routes are generally around 700km in the mountains and a mix of gravel and pavement. The idea is that we all set off together with the goal of making it to the finishers’ party a week later. Riders go their own pace, choosing where to eat and sleep along the way. Women form small groups and help each other out. Throughout the week, we leapfrog one another at the tops of mountain passes or in cafes. We find each other for camp. It’s incredible to catch up along the way, share ideas and make plans for the future. The women’s rallies are a direct response to the lack of women participating in bikepacking races and events. It’s not meant to be exclusive or outside of the cycling culture. The goal is to encourage more women to ride in any capacity and it’s working. The Women’s Torino Nice Rally is modeled after the original mixed Torino Nice Rally, now in its sixth year. The organizer always gives preference to women riders. However in 2021, women accounted for 5% of the rally. In 2022, after a successful Women’s Torino Nice Rally, women’s participation in the original rally went up to over 30%. The organizer credits the Women’s rally for this increase. It’s awesome– more women bikepacking! 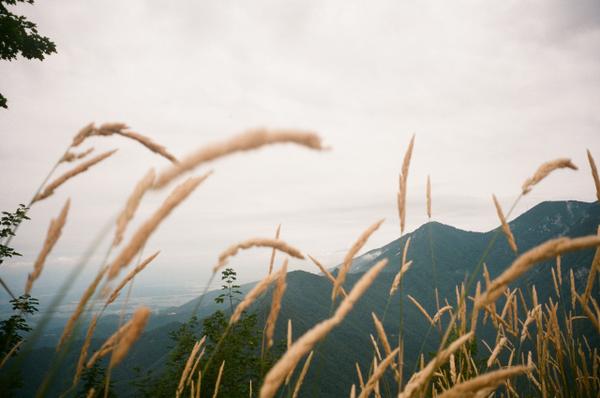 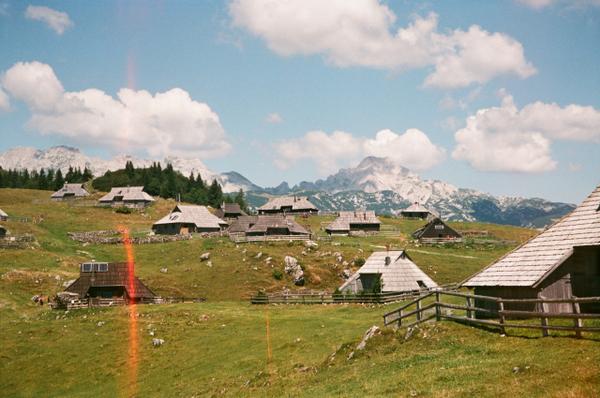 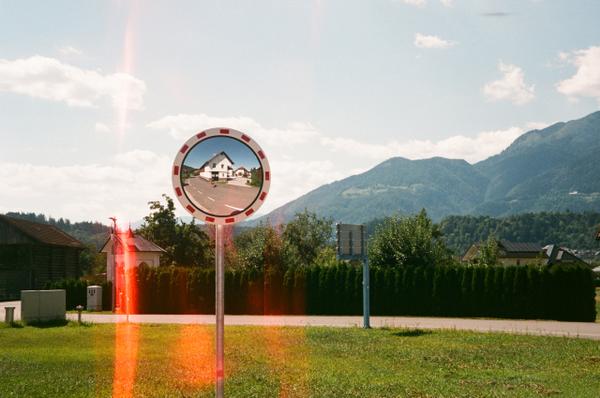 After three successful women’s rallies– 2 on the TNR and a third on the Montañas Vacías in Spain, the progression for the project is to host a new rally on an original route designed by a woman.

Route building is challenging, especially when designing a route from afar. Focusing on Slovenia was definitely ambitious, but I’d heard so many wonderful things about the country and riding. Why not? Almost a year later, eight of us met on Katja’s balcony in Ljubljana, Slovenia to build our bikes and set out on our first recce. There were two women from Komoot, two women from Sisters in the Wild, Rue and me. Wang from Seattle and Katja the local were chosen from a pool of 250 applicants to round out the team. We picked up Bea en route, making the full team of nine. Recalling her experience, Wang (who is also an exceptional photographer) shares what it was like to join this scouting and development trip:

“I’ve never ridden my bike outside of North America, and when I found out that I had the huge honor and privilege to join 8 others to scout the 2023 Komoot Women’s Slovenia Rally, I knew that I had to make it happen. Luckily, my supportive employer, Bike Works, was very supportive in me taking the time off for this experience. I had a lot of nerves going into it, getting my bike all ready, international travel, and was nervous about the route being outside of my abilties.

Once I arrived in Ljubljana, I was warmly welcomed by Lael and Rue at Katja’s apartment. I then took the time to reassemble my bike-it was my first time ever flying with it, and I was able to set it up all on my own! Some of the others went off and I ended up driving over to our first accommodation with Gaby who works for Komoot. We had some really great conversations in the car getting to know each other, and it felt surreal to be in a whole different country. I felt so lucky to be part of this trip and to be able to ride in a brand-new place that was in close proximity to so many amenities. I’m used to doing more remote routes, so this felt so wonderful and truly spoiled.” “After the first day of riding, the purpose of the trip finally all made sense to me and why I was there. It was really fascinating to see a group of talented women come together and build a route together. Each person brought a different experience and skillset to the group. Splitting off into groups helped us see what routes to actually were like so that people would have options depending on how they felt on that particular day. I felt comfortable on all the routes that I chose to ride and nothing ever felt too spicy for me, though it was very,very hot on most days. Everyone was super encouraging, and I never felt pressured to do anything that I didn’t feel comfortable riding. I trust and know my body and limits well, and I’m always very proud of myself when I listen to it.

By the end of the trip, we had spent so much time together and shared many stories. I was just so impressed by everyone and their thoughtfulness when scouting the route. It was sad to finally part ways in the end, but it will be an experience I will never forget.” 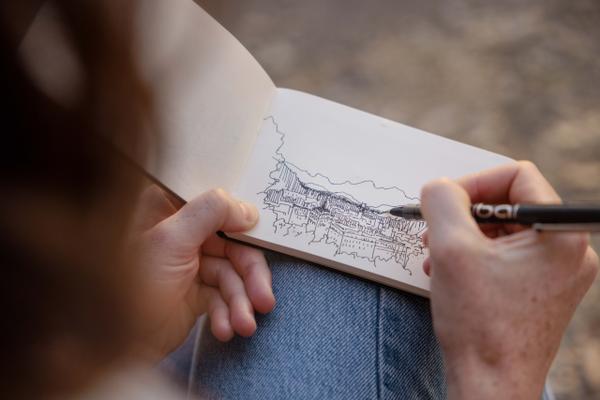 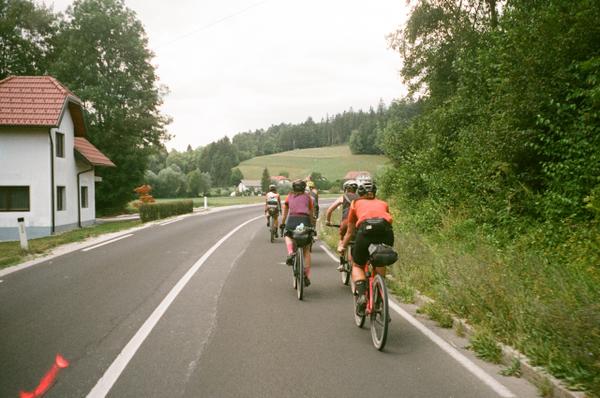 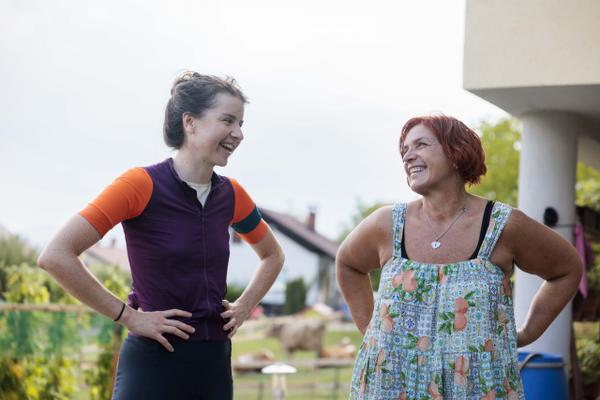 Rachael from the UK made the first attempt to draw lines on the map. As a group of nine, we rode north from the capital, focusing on the Velika and Menina Planinas– two beautiful plateaus with gravel roads rolling along the ridgelines. We rode through a heatwave. We went for a swim in the stream through Luče. We ate sour cabbage soup, buckwheat and summer salads. We visited Katja’s mother in Kamnik before riding her favorite local route back to Ljubljana. In the busiest tourist season of the year, Katja always found us a roof. It was beautiful, we had fun, but the route wasn’t complete. Bea stepped in. She’s from Trieste, Italy, just across the border from Slovenia and knows the country well. She’s an expert route builder and meticulous with the details. She designed the route for the Trans Balkan Race and several other shorter routes in Italy, Slovenia and Istria.

After our week together, she traveled home to her control center– three monitors with different map layers and paper maps spread across her desk. After a few days, she sent us a new route draft on Komoot– maintaining Rachael’s route in the north and connecting the loop through the south– past castles, caves, and wine country. With 600km and 12,000 meters of climbing, we had something to work with. Rue and I spent the next two weeks riding the second draft of the route. It was hard and we loved it. Roads in Slovenia are steep. It’s just the nature of the place. The mountains are close together and they climb high.
There is a strong history of preserving nature and taking care of the country. It’s clean. The water is pure. Wild camping is illegal and not only in the letter of the law– it’s not culturally acceptable. Finding camping and accommodation was an additional challenge, but it ensured that we always ate well and had somewhere nice to sleep. Arriving at sunset, we were the only guests in a mountain hut run by two sisters with beds for dozens. They served us goulash and strudel and fried eggs for breakfast.

We pitched our tent in a campground in the south. The host brought us a carafe of wine as a welcome and climbed the ladder to pick us ripe figs.

We slept above a bustling pizzeria and just outside the largest caves in the country. Wrapping up our trip in Slovenia, we held an event at Loose Cycles to talk about the route and meet local riders. Shop owners, Marko & Tine, are fundamental to the Slovenian bikepacking community. They are encouraging people to get out and helping them along the way. Every day we spent in the capital, we saw new riders coming through with bags strapped to their bikes, heading for adventure. They are mostly riding Joe Cruz’s West Loop and we’re happy to add a new one to the area. The Slovenia Women’s Rally Route is almost ready. There is a nasty 2km hike-a-bike in the north that makes a terrific connection. Our goal is to work with locals to improve the trail. It’ll still be a push, but at least it won’t be a bushwack. International trail improvement is another ambitious project, but it would be awesome to make this link through the mountains more accessible. We’ll see how it goes. There’s always the possibility of changing the route, but once you’ve seen the rugged mountains in the north, you don’t want to leave them out. Regardless, we are hosting a Komoot Women’s Slovenia Rally next September. There will be room for 50 women from around the world to join. As always, the route will be public and available all year. Ride with us or organize your own trip. Take pictures and share stories. All are welcome!

Note on photography: The first photoset in the gallery is by Rue Kaladyte and the second analog group of photos is from Kae-Lin Wang