Humbled by the Hook: a Collection of Tales from Team Stanridge at the Red Hook Crit Brooklyn

Humbled by the Hook: a Collection of Tales from Team Stanridge at the Red Hook Crit Brooklyn
Photos by Luke Atkinson, words by Evan Hartig with quotes credited.

On Saturday, April 28th, tens of thousands of fans descended on a large asphalt parking lot on the western edge of Brooklyn. The occasion: Red Hook Criterium #11. Some were there for the crashes, some for the skinsuit clad superheroes (and supervillains), but all were there for the party surrounding the raucous spectacle of fixed gear criterium racing. By the end of the night, many an athlete had left pieces of themselves on the brutal tarmac, especially once the skies opened and rain pelted the already-technical course with 10 laps to go in the men’s final. A select few left with the glory of a successful race.

Gone is the stoicism and pseudo-ego of a road race. Why isn’t the field tenser? The course is dark, soon to be saturated with rain from the storm cell currently hovering over Manhattan. No brakes, no freewheel. Maybe the whole concept is so absurd one simply has to be relaxed. Delusion? Maybe. 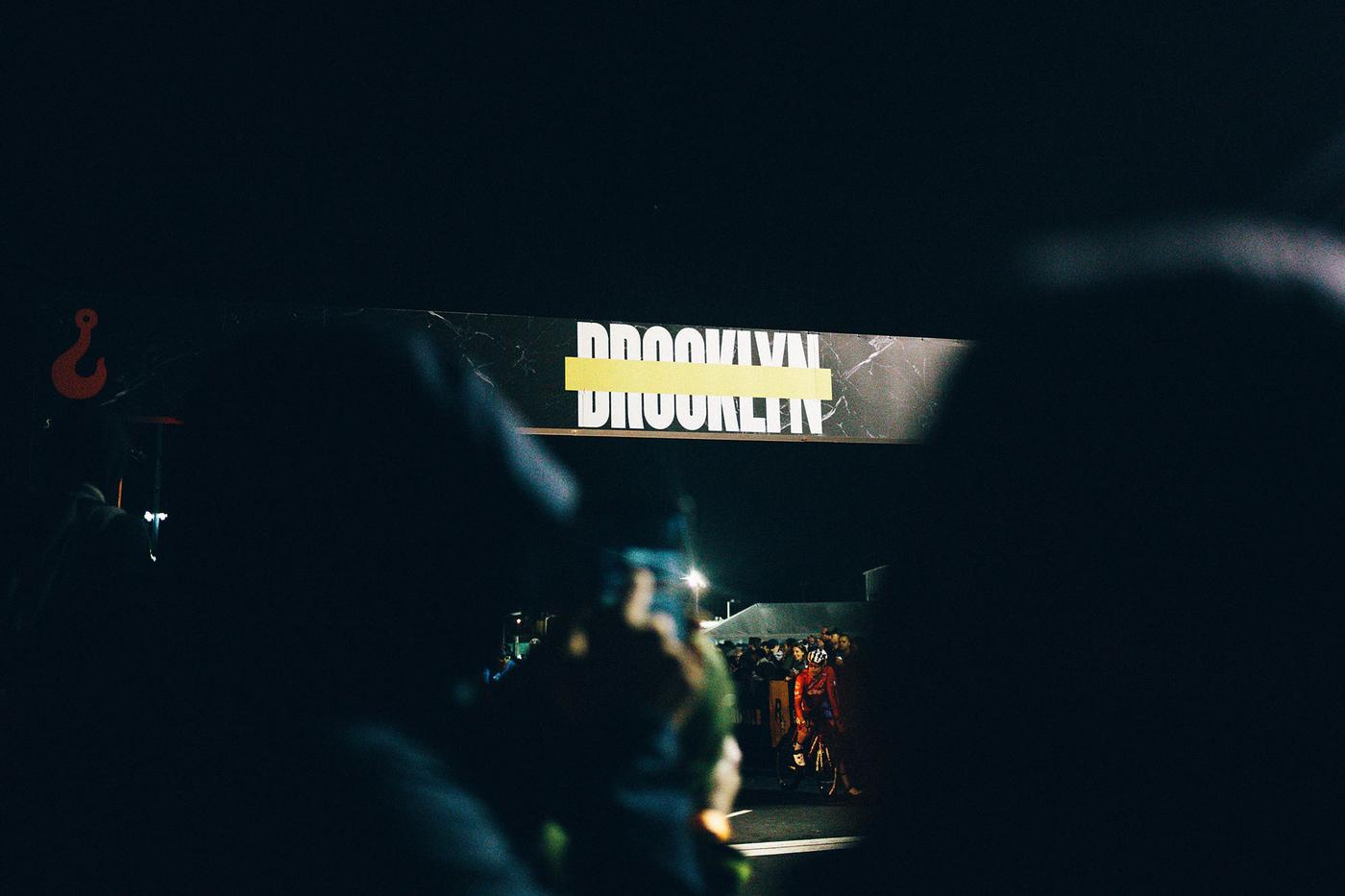 “I think one of the most attractive parts of the fixed gear criterium scene the after party. The seriousness of racing a brakeless bike at such a high level is juxtaposed by the strength of the community and the ‘race hard, party harder’ mentality. Fixed gear crits were literally born from a party (The first event was held in honor of founder Dave Trimble’s birthday), and there has always been a strong emphasis on enjoying yourself and letting loose with your friends after the racing is done. This allows up-and-coming racers, fans, and the general public to see the elite racers as fellow humans and relate to them on a more meaningful level.  While you may never be able to sit on Stephan Schafer’s wheel during the race, you can always drink a beer and dance with him at the after party, and that’s something special.” – Chas Christiansen, athlete, legend, and patron of fixed gear culture.

Team Stanridge/Roley Poley approached race day not knowing what to expect. Every athlete on the squad was new to fixed gear criterium racing, and team manager Adam Eldridge had taken a gamble on their preexisting race pedigrees. The team carried experience from the road and the track: Evan, Jake, and Monk with multiple criterium national championships on the road, and Tegan: with Canadian national titles on the track. 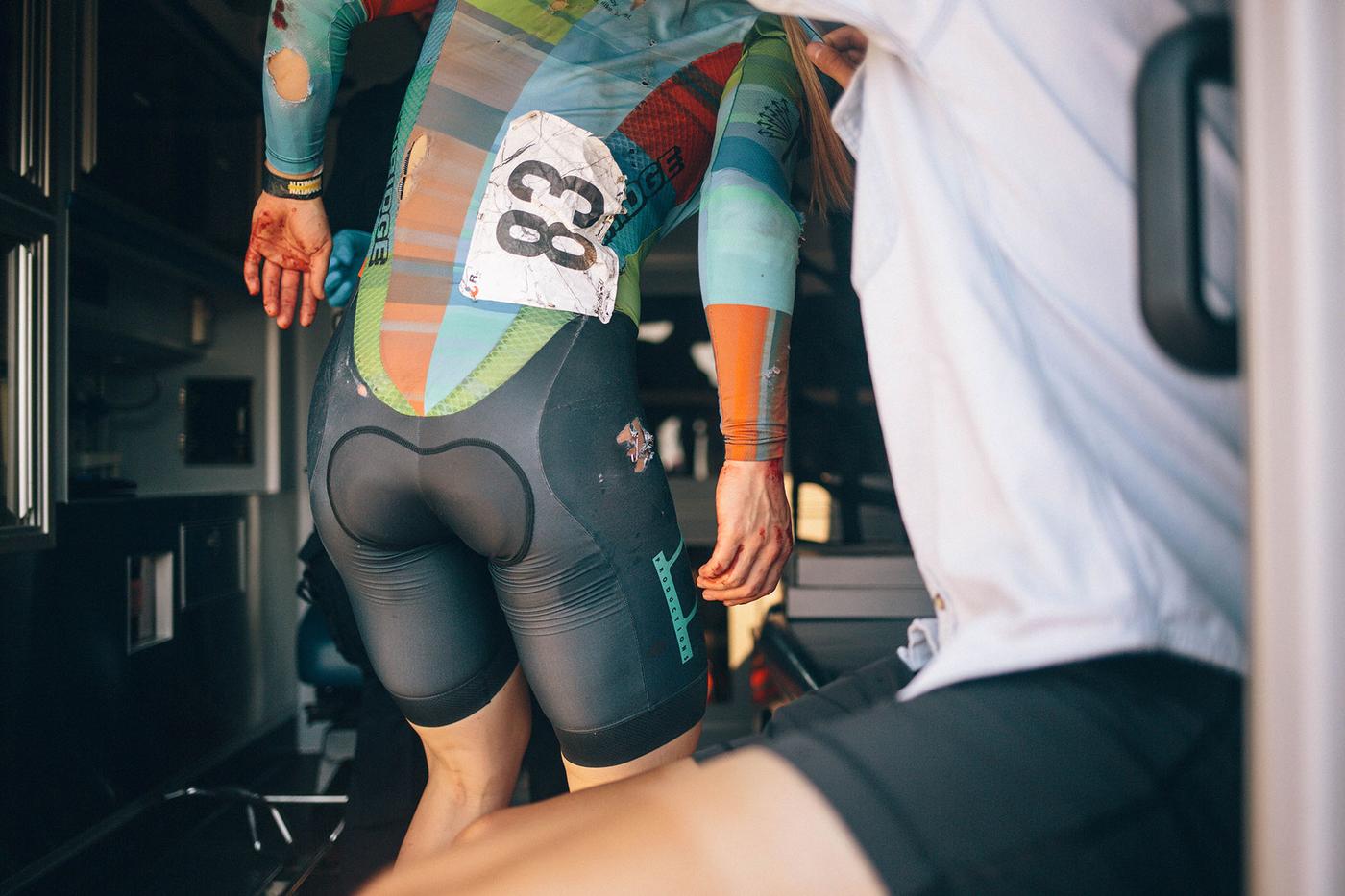 “Some would look at the photos of my crash and believe it to be a terrible experience, but in fact, it was one of the best experiences of my life. It took my expectations and humbled them in an instant.

For the past 2 years, I have been dedicated to sprint track cycling, racing on an international level with Team Canada. At the beginning of 2018, I decided to take a risk and leave the National Team to pursue a different cycling discipline. My mind was set on criterium racing and with my track bike experience and desire to try new things, the Red Hook Crit seemed like the perfect fit. I signed with Team Stanridge in February and instantly started training on how to assertively ride a track bike in a criterium circuit. On the day of the race, to ensure good placement in the final I did exactly what I trained to do by using my sprint to open up a large gap between me and the other racers. I tried hard to keep my speed so nobody would catch up with me but unfortunately, I pedal struck going into a corner and flew over the handlebars and landed on my face. 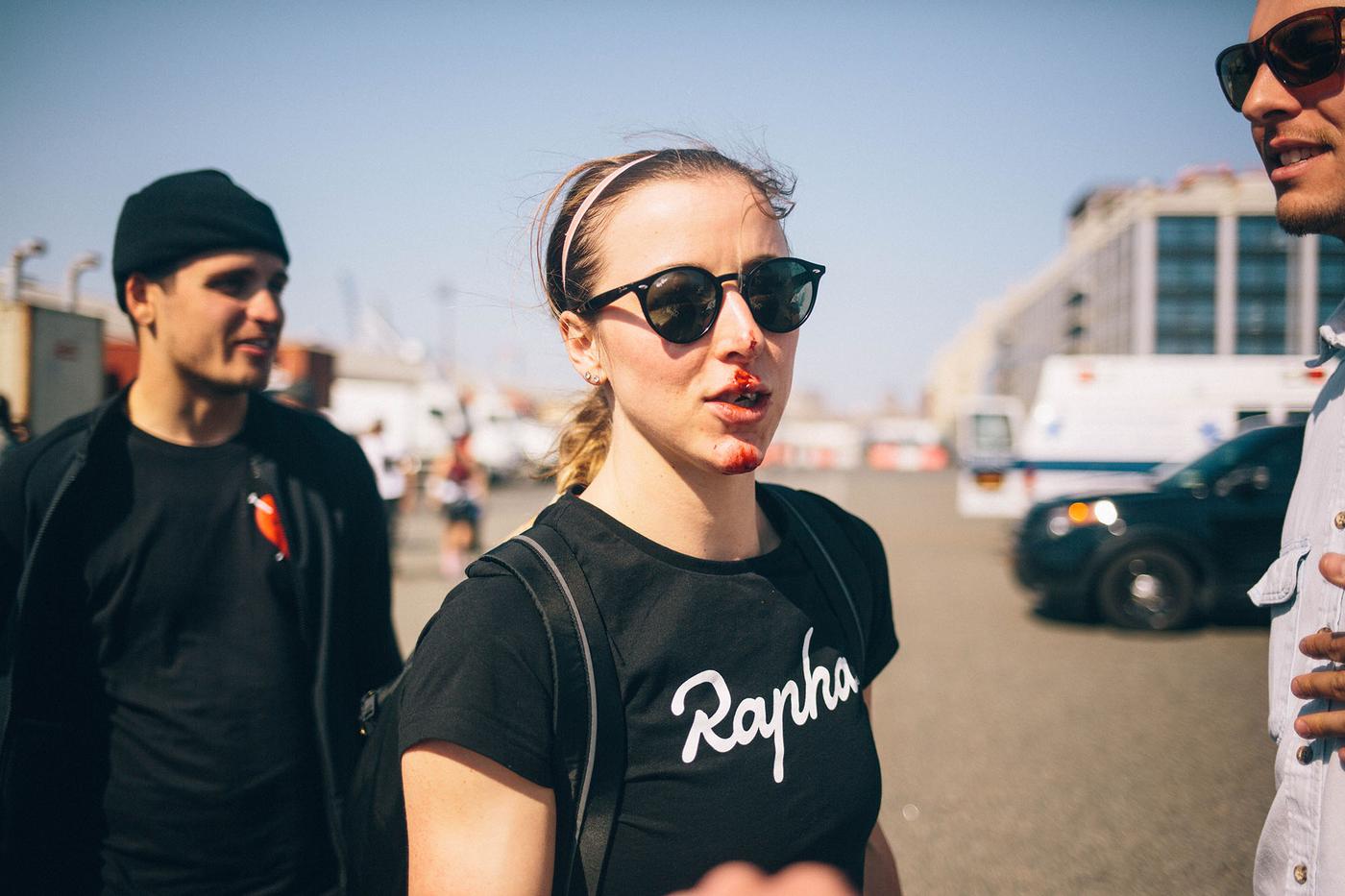 Smashing out my teeth, having lacerations on my face, suffering from a concussion and missing out on an opportunity to race in the final wasn’t an easy experience but I have a history with being patient through injury. Getting banged up in this race was difficult but I was able to grow from it and the experience as a whole has enriched my life. Team Stanridge and our sponsors quickly became my new family, the cycling community shared things with me to support my healing, and of course, my own family was there to laugh at my toothless face.

Riding a bike has taught me that I am capable of accepting defeat, overcoming it and moving forward. My goals of becoming a successful athlete have evolved and I’m looking forward to pushing myself to new limits this race season. If anyone asks, you can tell them that I’m Hooked.” – Canadian Cyclist, Tegan Cochrane 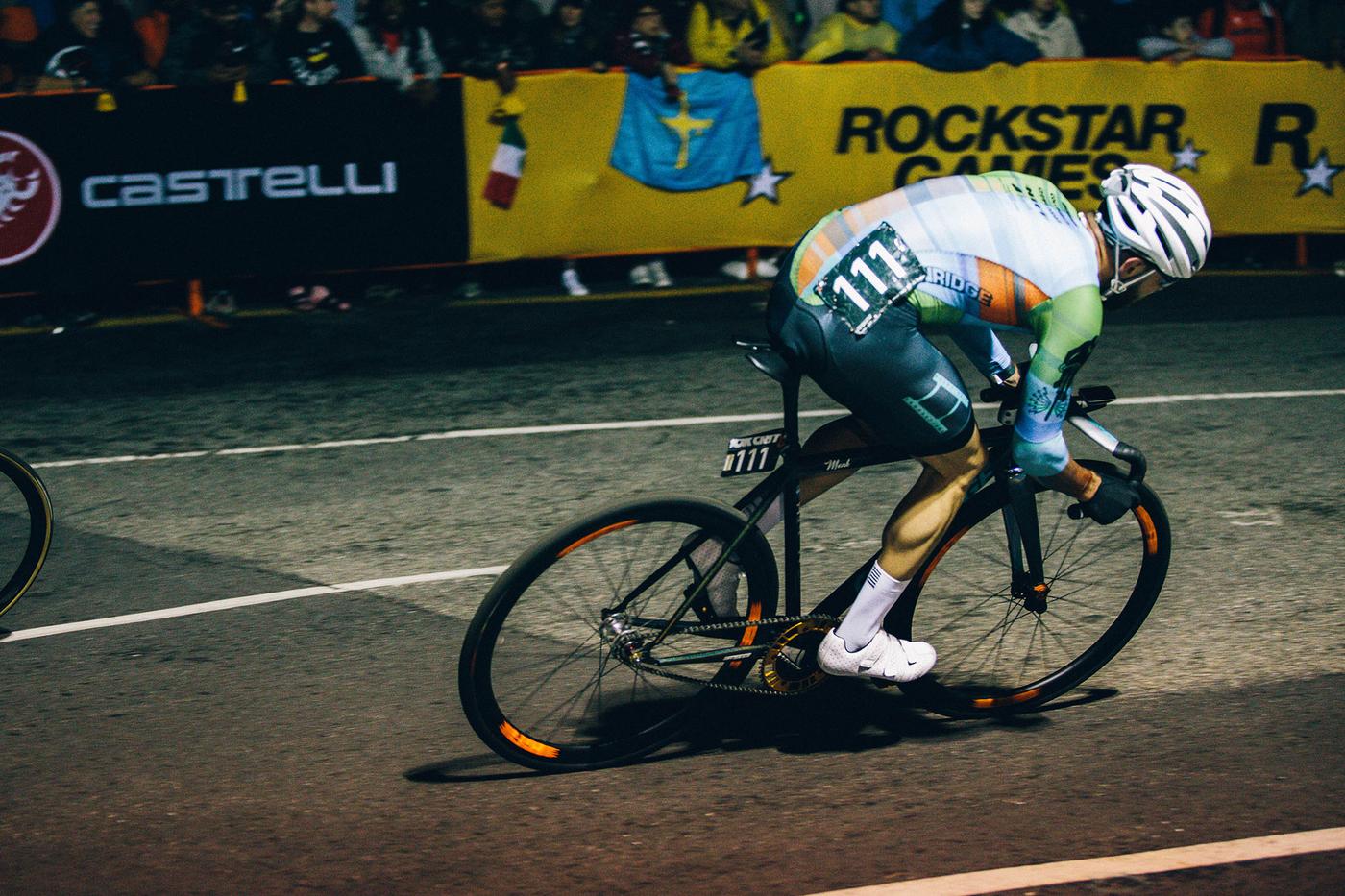 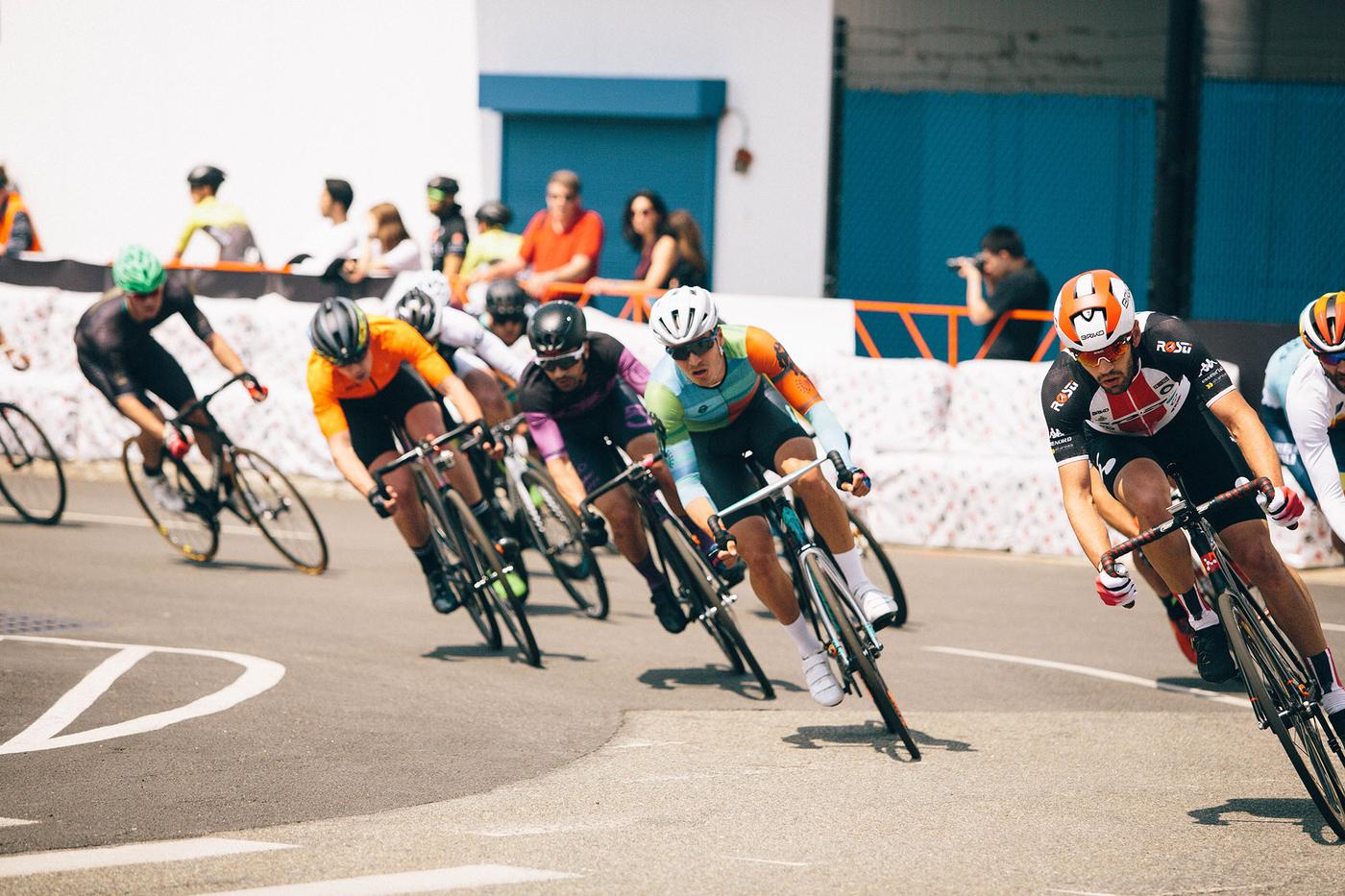 “The fixed gear cycling community is immensely creative, supportive, resilient, humble, welcoming… all the things one could hope for. I race on the road as well and there is no community at those races; most of the time the only spectators at races are people who have just raced or are going to race. In my experience, people compete in USAC races for recreation. People come to fixed gear crits for the party. As far as competition, in what other arenas can you or I, committedly average cyclists, line up against the best in the game? We may get our asses kicked but we’re given a chance. And sometimes, just having the opportunity can have a profound effect on someone’s life.” – James Grady, Mission Crit San Francisco Race Director and RHC Brooklyn #11 competitor The day ended up being an emotional roller coaster. Bikes were prepped, gear was dialed. The only thing left: kit up, get warm, and enter the savage asphalt coliseum. The boys qualified and would start the final later that evening. Tegan pedal struck during her qualifier and took a gnarly tumble. This gallery captures the brutal realities of bike racing that frequently exist next to the stuff we live for: stoke, friends, glory, speed. Photographer Luke Atkinson was on hand to capture the drama that unfolded.