The Crust Scapegoat is the manifestation of over a decade of Goat riding fat bikes. Back in the dark ages you may remember reading a blog called Riding the Spine? Yep, way back then, Goat was already riding fat bikes on the original Surly Endomorph tire and was definitely not wearing shoes. Over that much time, Goat worked out that he wanted a bike with a normal 73mm bottom bracket shell and 135mm hubs, that also fit fat bike tires, but without an offset rear end. 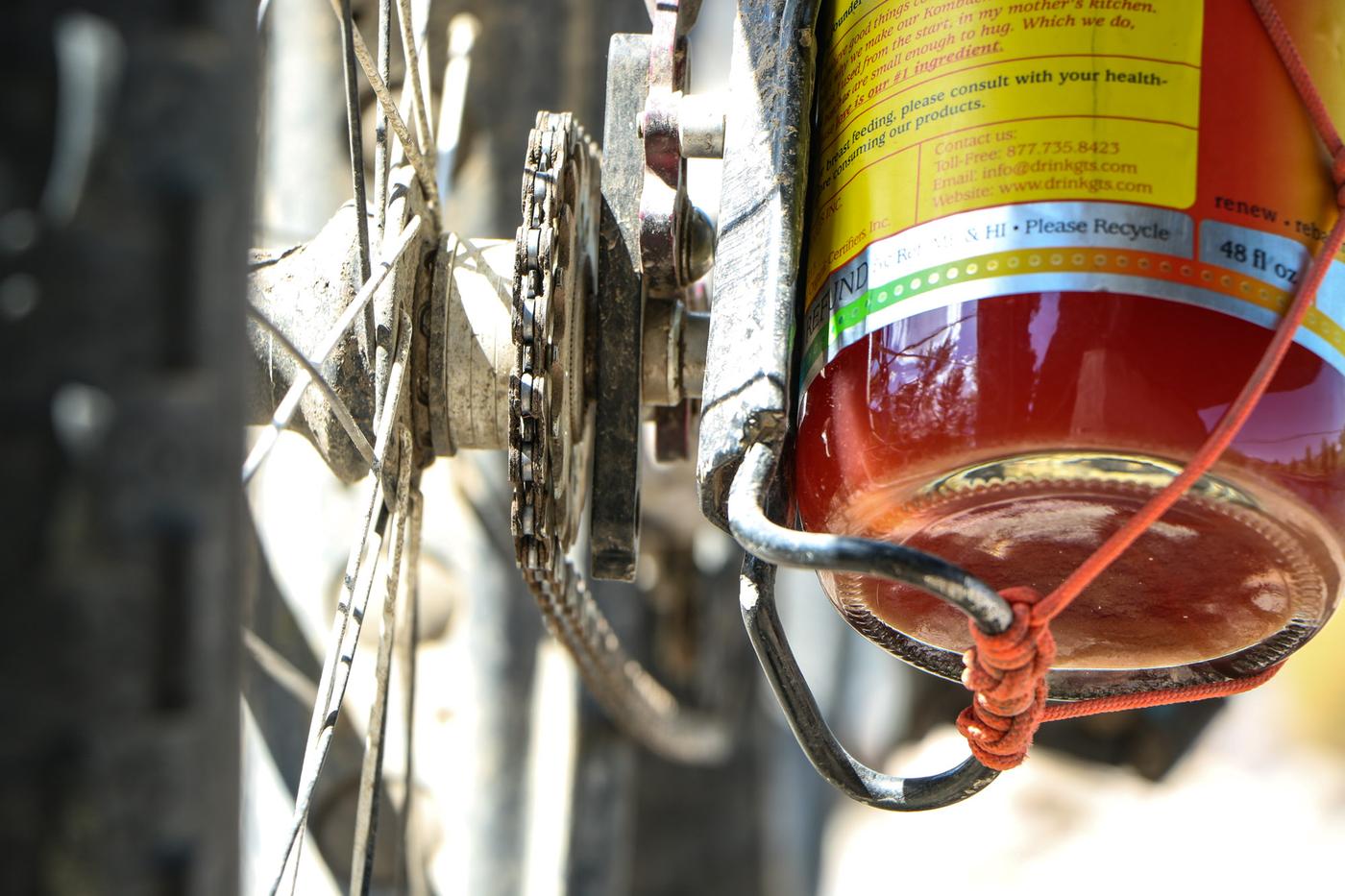 So here we have the Scapegoat. Using 135mm wheels at both ends – like the Surly Pugsley and now the Tumbleweed Prospector as well – means you can swap your wheels front to back, and use just about any old mountain bike’s rear wheel as a replacement if you get in a bind. Goat’s drivetrain is an impressive feat that we’ve all considered at some point: two wheels, two cogs each, making for four different gears with a single chainring.

Though Goat’s setup does remind us of the limitations of a 135mm rear end and big tires. With a fat bike tire, you’re pretty much limited to a single speed drivetrain or an internally geared hub like a Rohloff, and even with plus tires on 27.5 or 29” rims (it’ll clear both) you may find some tires too wide for an 11-speed drivetrain. But, those who find themselves compelled by world-wide hub compatibility are usually willing to look past this point. 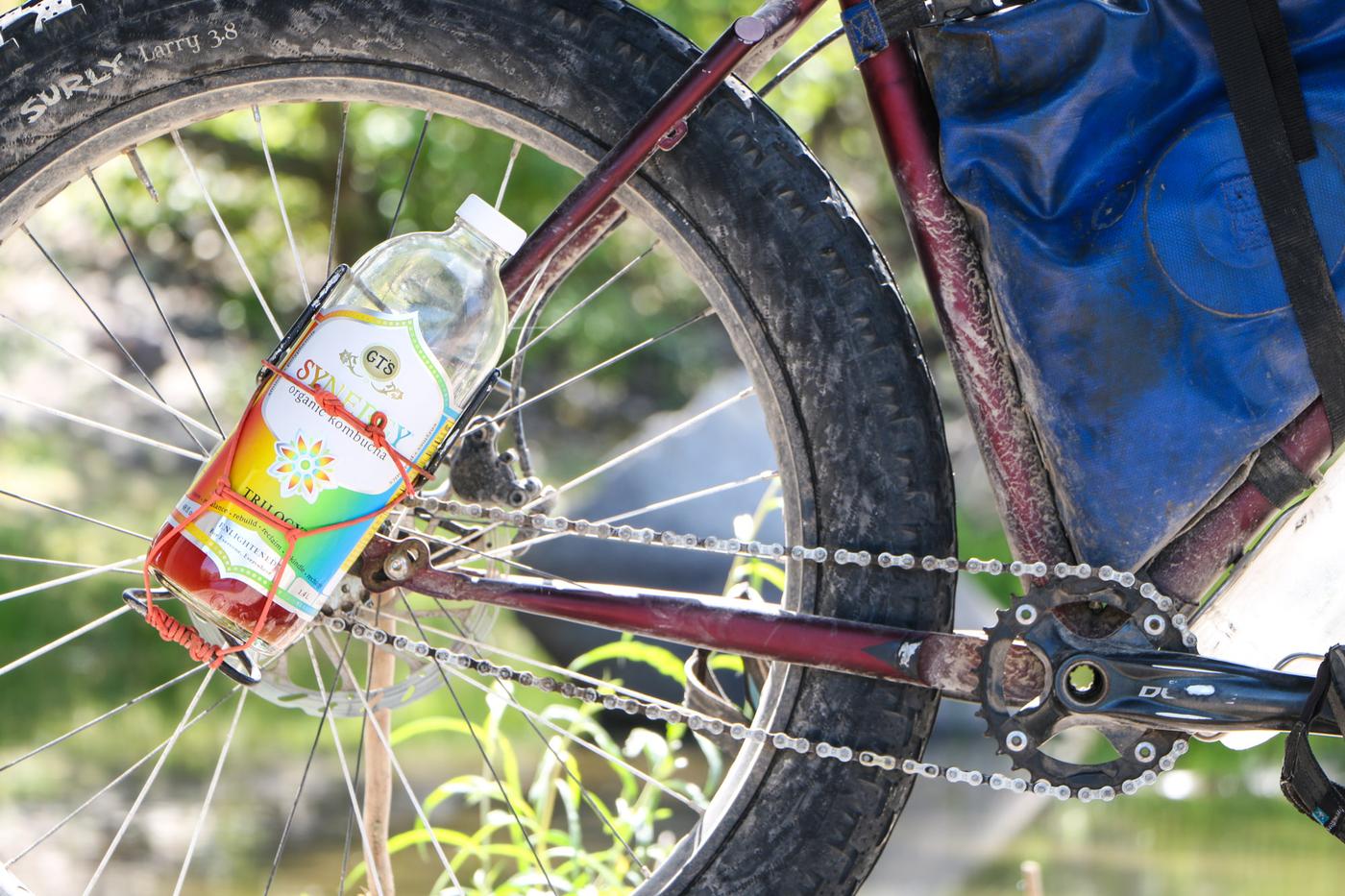 Cargo carrying is obviously something Goat’s done a lot of, so while you might at first think the glass bottle of kombucha looks a bit suspect, possibly even staged, you would be wrong. On this particular trip, Goat had just ridden a thousand kilometres of the Great Divide with a kilogram of Adams peanut butter in a glass jar on the left side, and a bottle of sriracha on the right. And keep in mind he also did this with just one gear at a time, and no shoes. The frame bag and seat pack are made from a retired kayaking dry bag. Goat took said bag on a trip he was guiding in India – on which he also brought the original Scapegoat prototype that Darren Larkin welded up – and when it was time to retire the dry bag, he cut it up to make the bags you see here. Finding someone to sew the thick material was a challenge, but he says the frame bag has remained waterproof since. The front harness is a Porcelain Rocket MCA he got from Matt at Crust, but pink didn’t go, so he spray painted it.

Goat’s handlebar of choice is the original Jones-designed H-Bar with a straight crossbar, saying he prefers the hand positions it provides over the modern Jones Loop. These have been out of production for quite some time now, but when you like something, you’re willing to go above and beyond. Over the years this has at some points meant that Goat has simply had to weld up his own H-Bar. Fortunately, he likes the simplest and arguably most easily replicated bar this side of a broomstick. 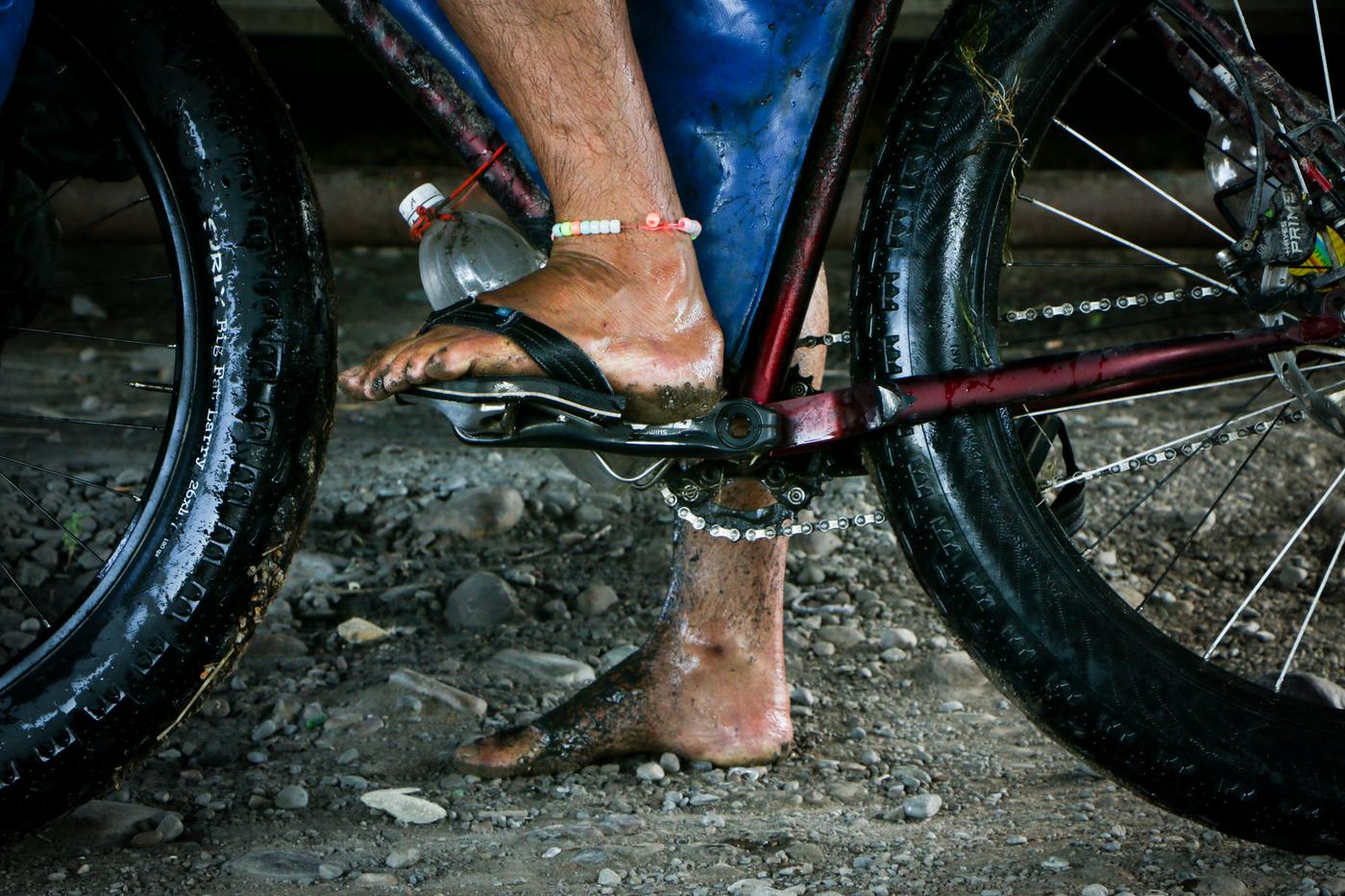 The pedals. How could we get this far without talking about those pedals? From the bottom you’ll recognize an old Shimano road pedal originally meant for a three-bolt toe clip. On the back of that is an L-bracket from the hardware store. The flip flop is mounted to the toe clip bolts, and then trimmed at the front to allow Goat’s toes to wrap around. I’m sure Goat’s lost count of how many pairs of flip flops he’s gone through over the years, but obviously he’s found that better quality flip flops last longer. 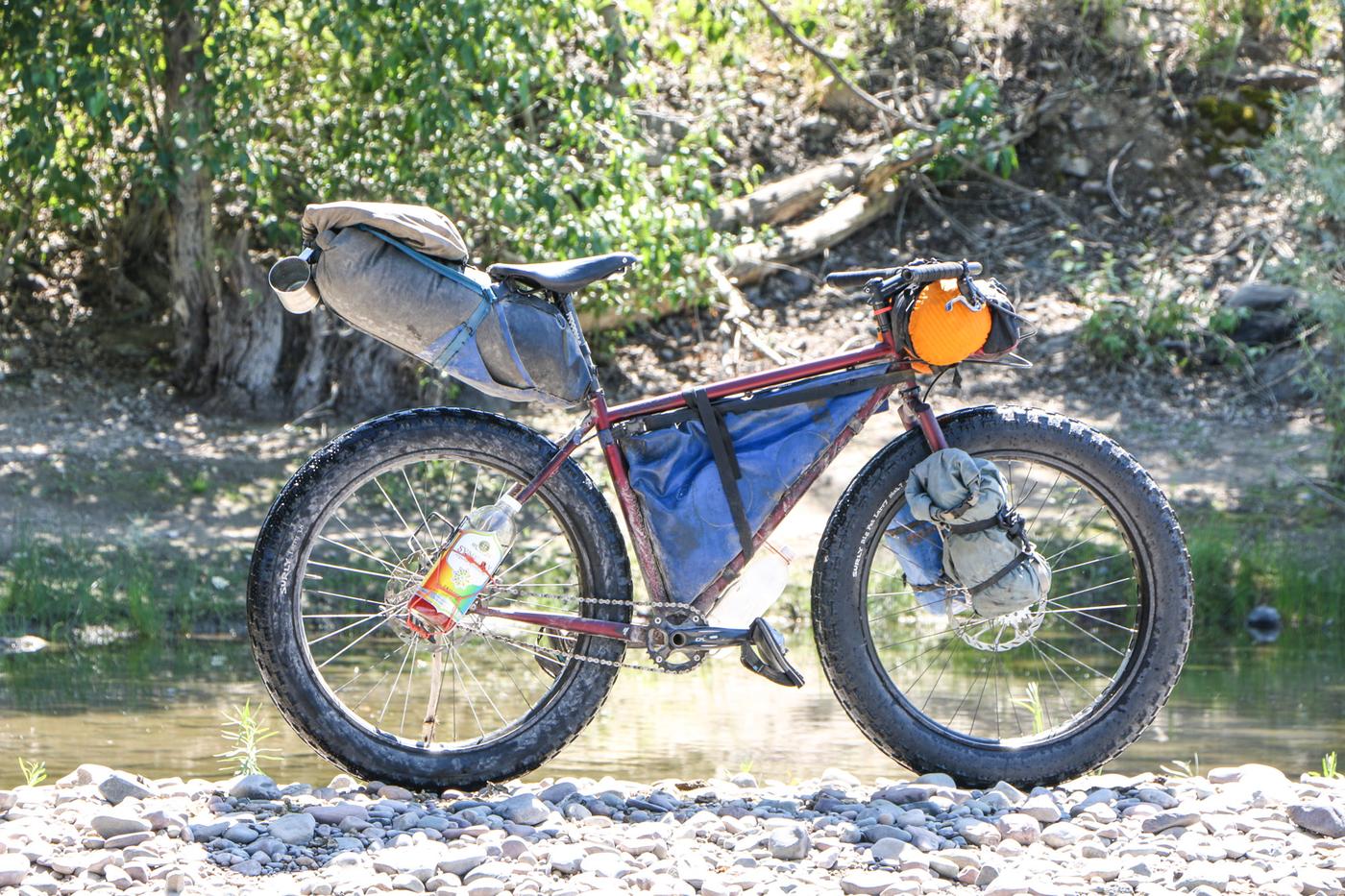 Every detail has a story, and while Goat is soft-spoken, he’ll gladly regale you with those stories and much more. To this day you’ll find him roaming dirt roads and singletrack, continuing to hone his perfect bike. His Scapegoat is a hard-won antithesis to shiny and new bikes that look good, but haven’t been tested. It’s not flashy. It just works.