Scouting the urban route the day prior, getting lost in bicycle overpasses. The Sierra de Guadarrama reminds me a lot of the Sierra Nevada in California, both in terms of geology and biology. With the La Pedriza providing for ample interestingness in the background, and familiar flora growing on the mountain sides. Yet, like the California Sierra range, the unpredictable weather is sure to keep you on your toes. 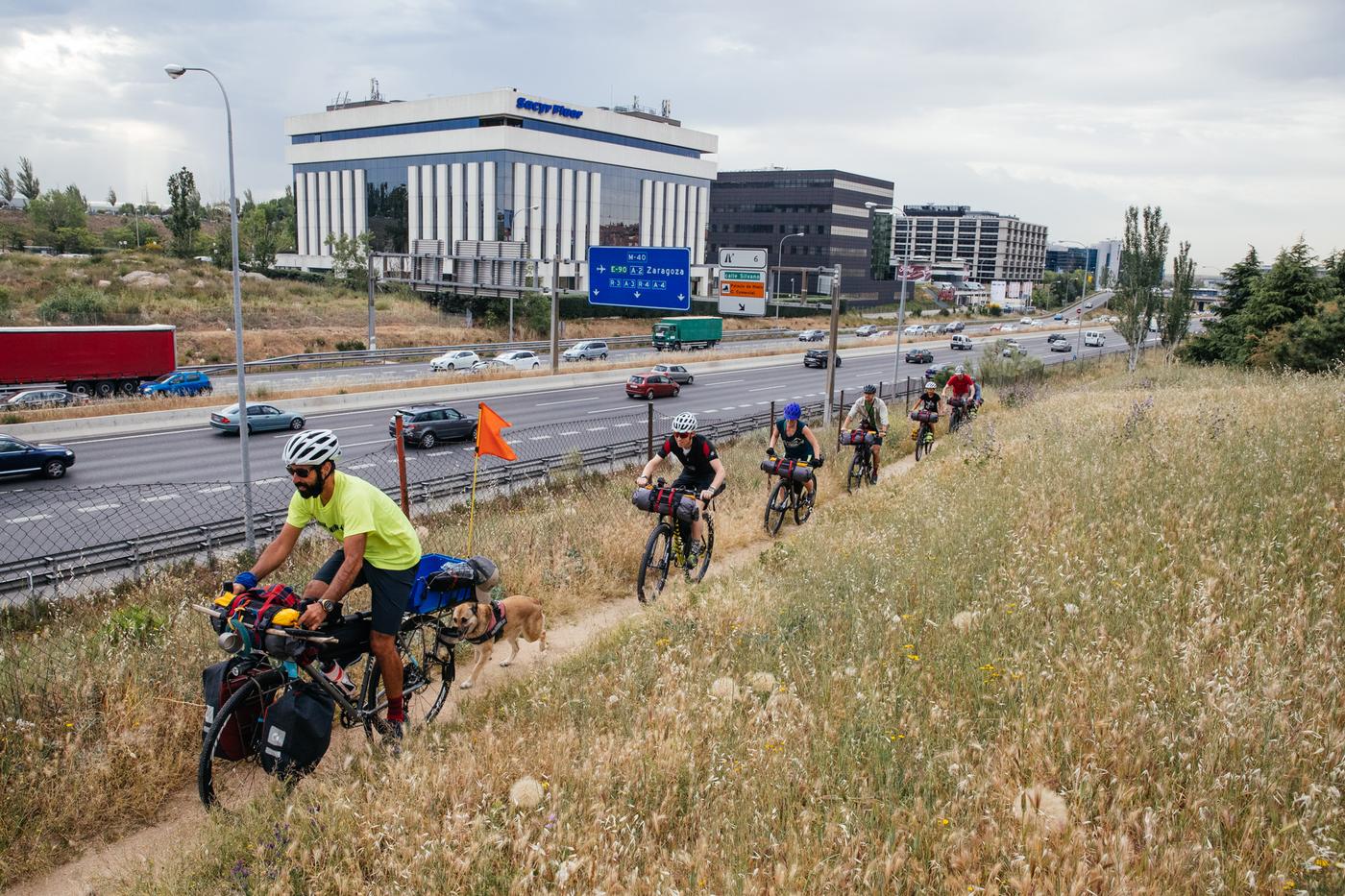 As quickly as the Rangers were acclimated to their jetlag and familiar with their bikes, it was time to roll out from our airport hotel in Madrid. Our agenda was pretty straight forward, go up, up and up into the mountains, set up camp in the Lozoya river valley, spend the next day exploring the area by bike, before one last night of camping and ultimately, leaving for the airport on the third day. Like most major metropolitan cities, Madrid was fairly easy to navigate around and out of. After twenty miles of urban bike paths, we found ourselves in the rolling hills and small villages at the base of the Sierra de Guadarrama.\ From bike paths, to closed forest roads and straight up the mountains, the day provided for ample visual stimuli and plenty of painful grades. The group would go silent as the pitch increased and the ground gave way to our loaded bikes. Even when the sky began misting on our caravan of merry bicycle tourists, the group stayed together and pushed onward. It wasn’t until the torrential downpour and high winds arrived that we all huddled inside a mountaintop tourist shelter adjacent to a parking lot overlook. A bag full of Spanish tortilla from lunch circulated as summer sausage and almonds were shared. Finally, after collectively shivering, a break in the rain came, prompting us to descend into the valley below, where our campsite – and dinner – awaited. Riding in groups often leads to long days on the bike, yet this trip went without issue. The 60 mile and 6,000′ route was challenging enough to keep it interesting, while beautiful enough to distract one’s mind from the slowly-diminishing mileage awaiting. Our campsite was a plot of land inside the Monte Holiday compound, a countryside retreat, filled with cabins and hiking trails. We’d make our home there for two nights, allowing for plenty of relaxation and exploration. While the Rangers were attending orientation, a handful of us decided to ride the dirt roads through the valley, stopping for Sangria and snacks along the way, before returning back to camp for a fireside BBQ. Upon returning home, each of these Rangers will begin to plan their trips. Ranger Nam will take on the Swiss Alps, Jenny will ride the Scotish Highland route, Fabian’s touring the Trans Germany route and Pablo will tour the various offshoots and options of the el Camino de Santiago. You can read up on each of these trips at Blackburn and look out for more stories and videos to come on their social media later this summer.