Locked and Loaded on the Niner RLT9 Steel

Cyclocross bikes may be designed to race for 45 minutes to an hour in various conditions, but their beauty lies in their versatility. I’ve put in a lot of time on my cross bike over the years, and only a fraction of those hours were spent racing. Instead, my bike’s been on road, trail, dirt, gravel and frontage road rides. With the right gear range, which is now as simple as a cassette or a chainring swap, a cyclocross bike could very well be the only drop bar bike you’ll need.

Companies like Niner are banking on that and while they offer a few ‘cross bikes, the RLT9 Steel is their flagship steel rig. Made from oversized Reynolds 853, with a pressfit 30 bottom bracket and a sweet carbon fork, the RLT9 Steel is being marketed to the “adventure” crowd.

What better way to test a bike’s capabilities than to pull one right from the box, strap three day’s worth of camping gear on it and chase 20 people around the mountains, roads and singletrack in central California?

That’s exactly where my relationship with the RLT9 Steel began… In the San Jose airport. While Robin was planning the Blackburn Ranger Ride, he reached out to Niner about supplying the rangers with bikes for their journeys, as well as a few media (that’s me).

My personal ride, size 56cm, was built with Ultegra and the hydro Shimano RS-685 levers. 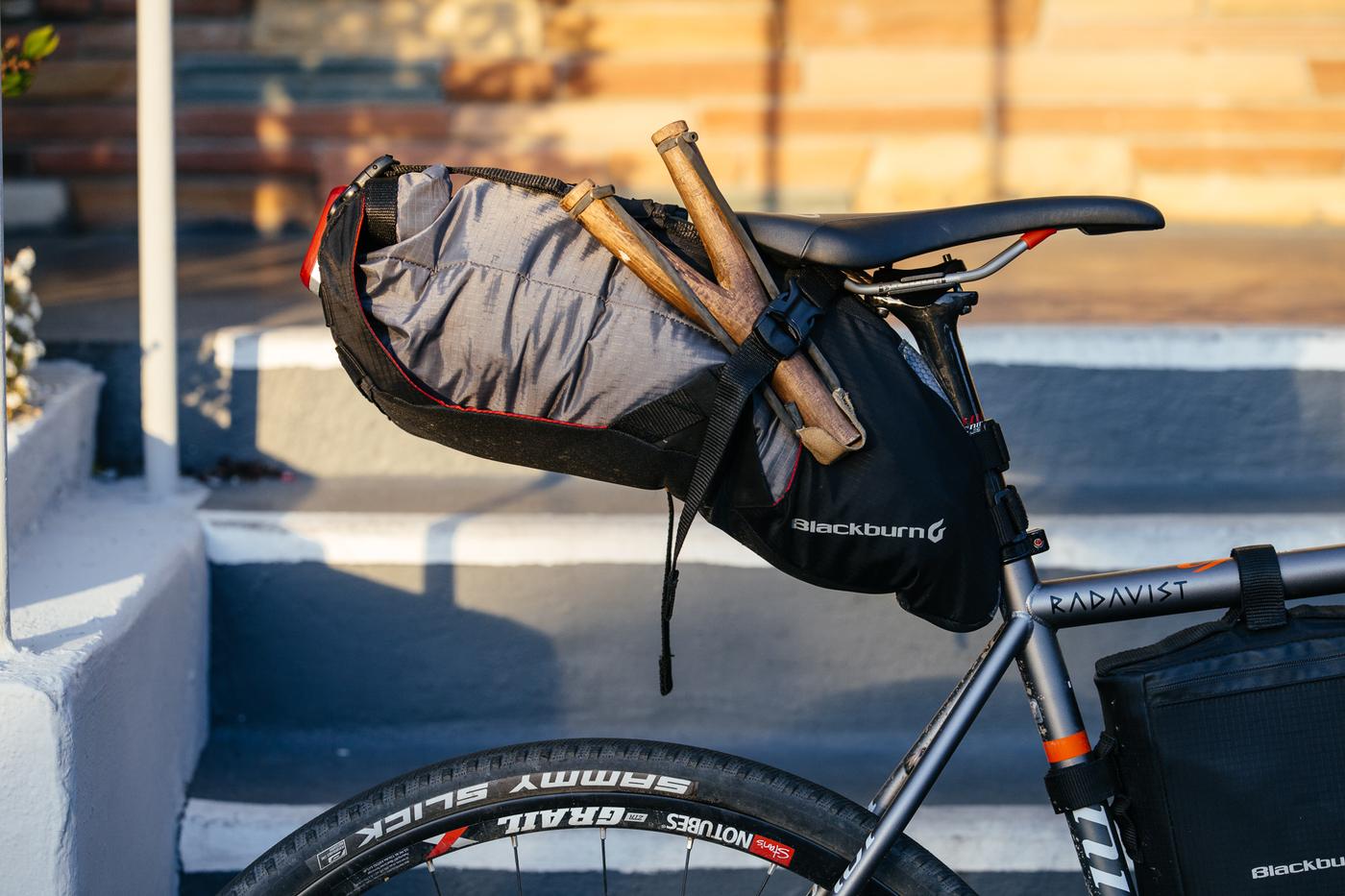 As you can see, I opted for bikepacking bags in lieu of racks and panniers. I did so for a number of reasons. This way, the bike has virtually no bolts holding bags to the frame. No pieces to rattle off, no way for a bag to jettison off a rack and into the path of another rider and honestly, it just looks so good like this! Also, there are no mid-stay rack mounts, so you’ll have to clamp your rack to the stays if you wish to run a rack. 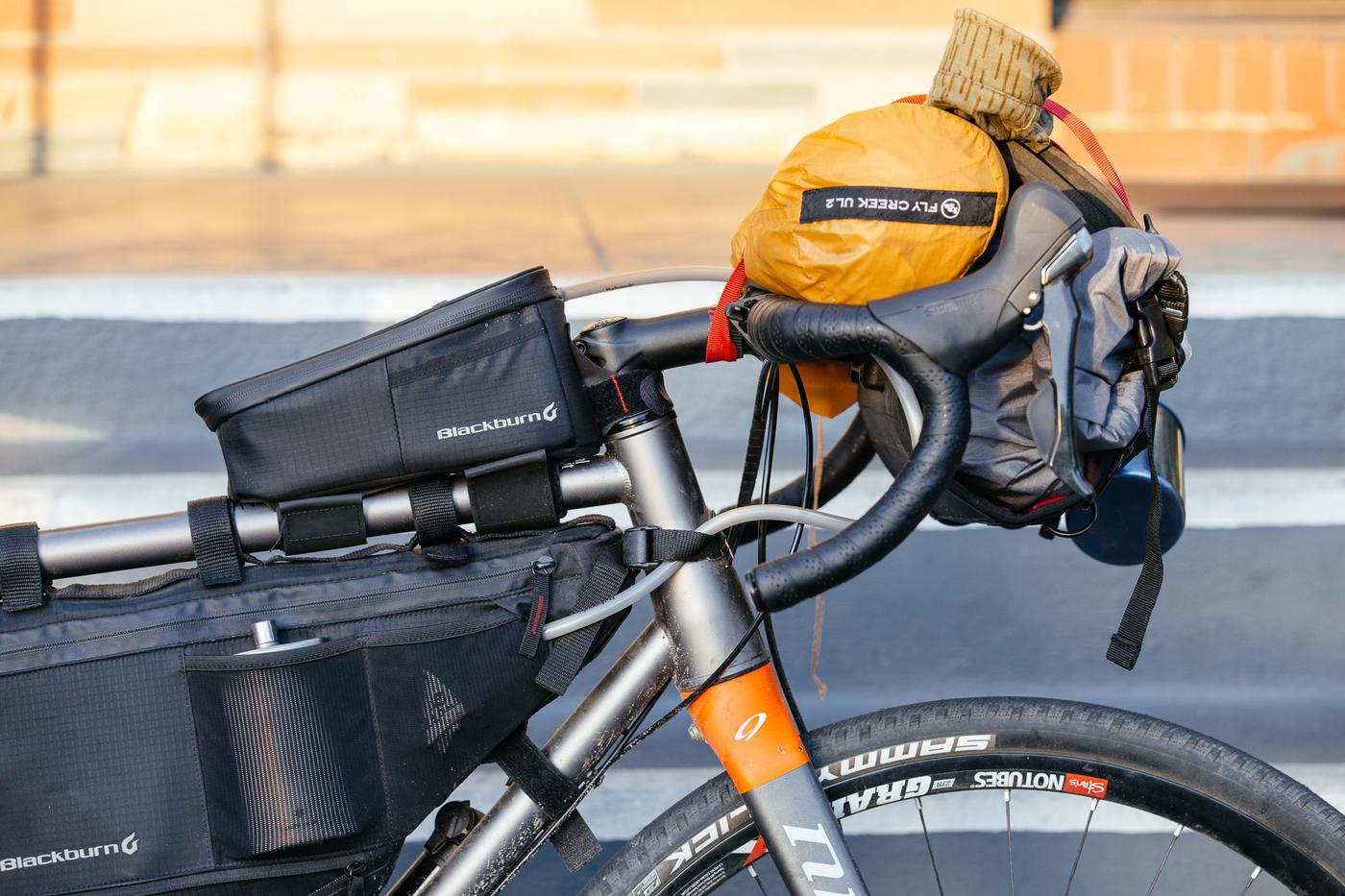 Since the Blackburn Outpost bags utilize compression sacks, I can cram all of my soft goods into the saddle and bar bag, while keeping my hard goods and hydration bladder in the frame pack (prototype). Because this bike uses brake / shifter systems, I had to be mindful about the width of the handlebar bag for shifting purposes. If this were to be my full-time touring rig, I would opt for a bar end shifter setup to avoid this problem. Admittedly, my favorite detail on the Niner RLT9 Steel is the burly fork. It’s got it all. Fender mounts, great lines, a solid 45mm rake, when coupled with the 71.5º head tube angle on the 56cm model, offered just the right amount of trail for me to descend Gazos Creek Road wide open. 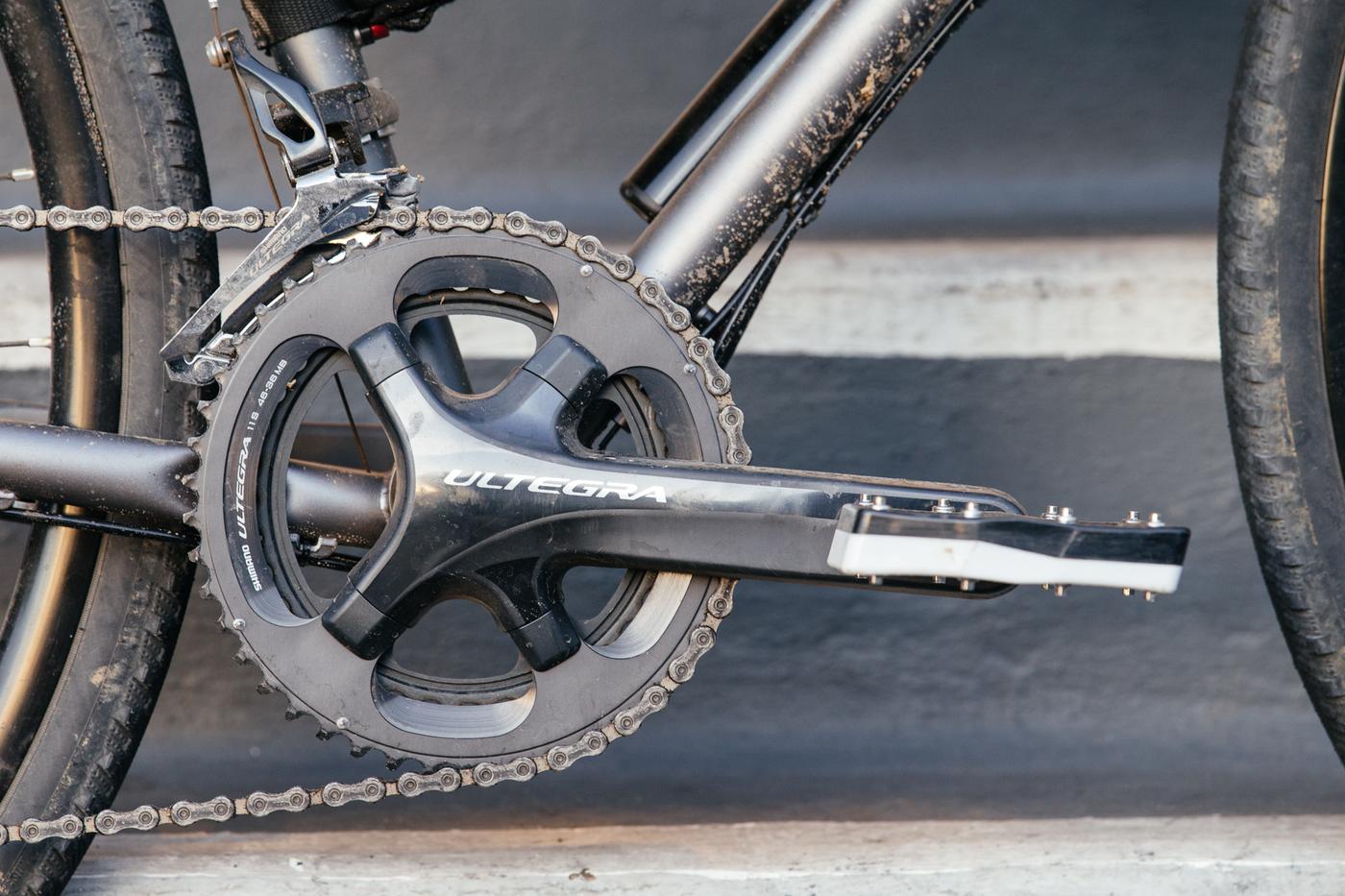 The stock Ultegra gear range was a little on the heavy side for my personal riding style while bikepacking. I.e. spin it to win it. There were times when I was out of the saddle, legs burning, really feeling the need for a 32t cassette or a 34t inner ring. If you decide to go with an RLT9 Steel for bikepacking, make some adjustments here if your trip will be hilly. 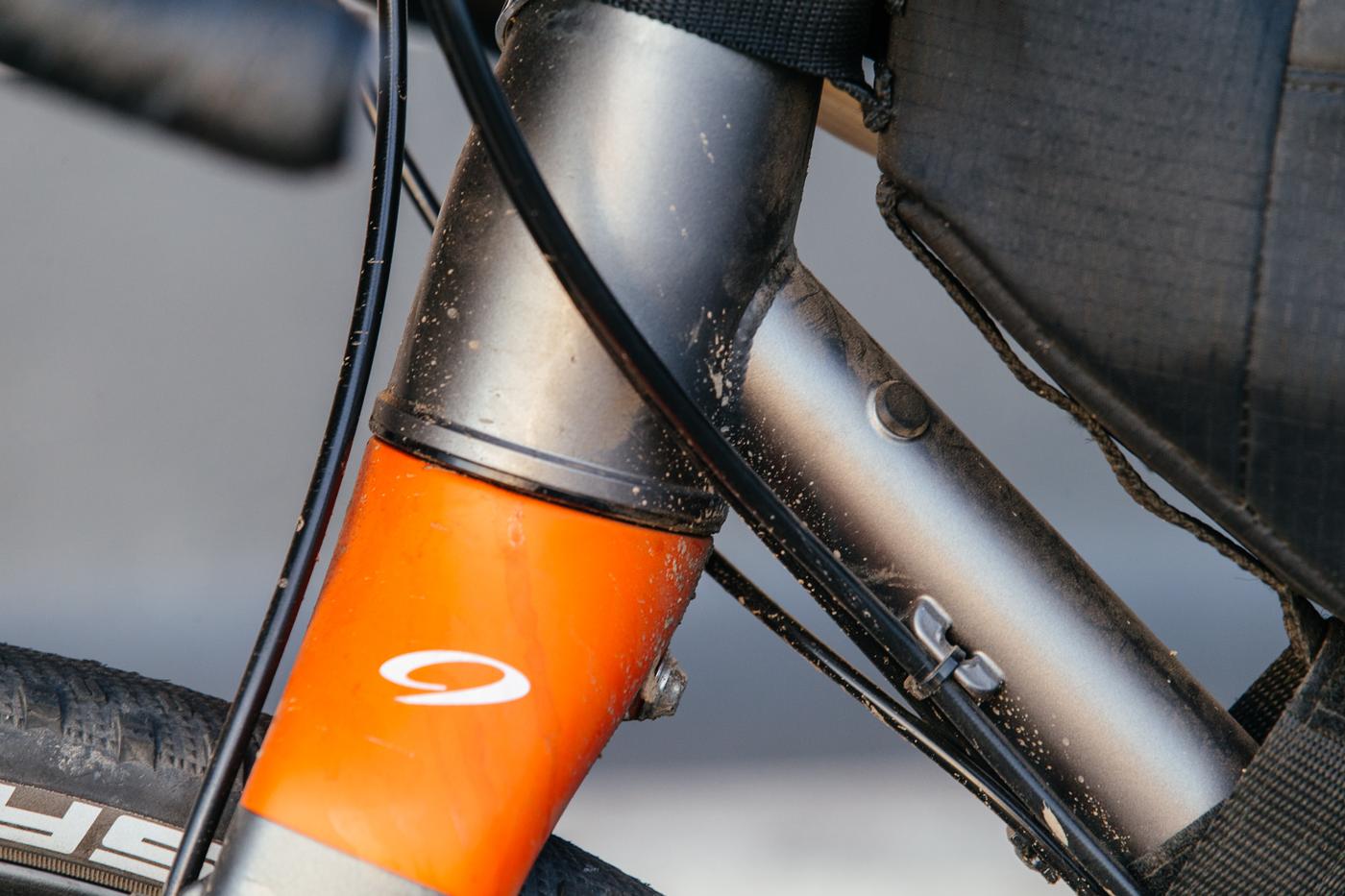 If you chose the Di2 build option, there’s a nifty port hole on the NDS head tube cluster. Reynolds 853 is an exceptional tubeset, worthy of this bike. Because Niner went with a PF30 shell, they could mitre oversized tubes into that cluster giving the bike a good amount of stiffness. 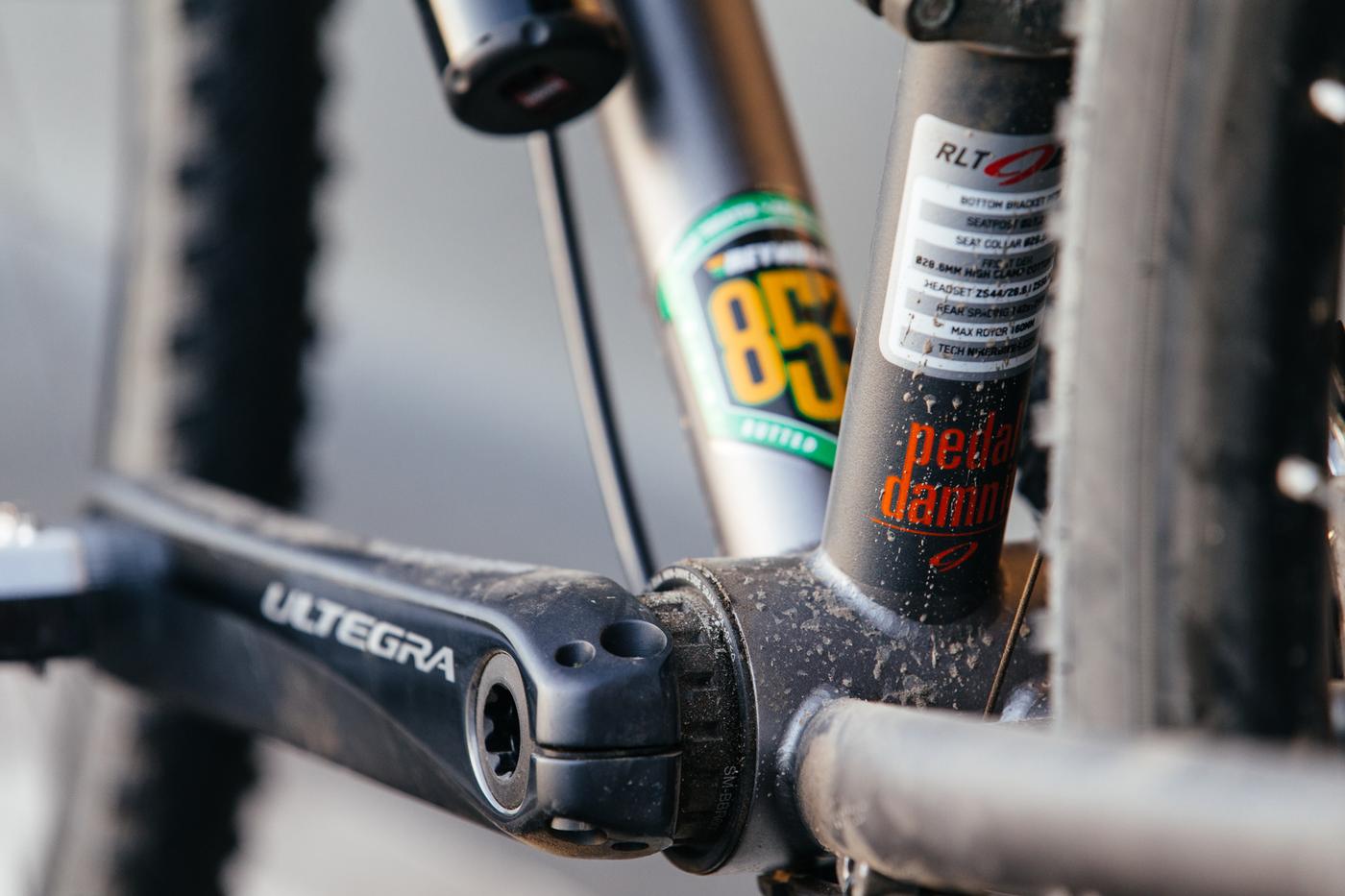 … here’s the bike after our 3-day, 120 mile trip. Same, chill stance and third day hangover packing technique apparent. Hey, we all have those mornings.

All in all, the Niner RLT9 Steel is a worthy companion for ascending and descending dirt or tarmac, loaded with a minimal bikepacking setup. So, how does it handle it all unloaded? I truthfully haven’t ridden it unloaded yet! Time will tell. Expect a follow up to come within the next few weeks. Until then, head over to Niner to read up on the RLT9 Steel, its build options and check out some detailed photos in the Gallery.