Every Monday at 11 am, the entire PAUL Component shop staff has an “All-Hands” meeting to catch up on any changes or shop news or projects. For the last few months, this has been in the backyard with masks and everybody yelling across the yard to each other. It’s weird but no weirder than our usual shop vibes. Last Monday, Paul announced that November 2nd is International Singlespeed Day. We all looked at him like “Huh? Says who?” Then he said it was him and his friend Amanda’s birthday that day, and it was Amanda’s idea, and why the hell not?

Having never created an International Holiday before, I wasn’t quite sure what to do, so I got on the phone with a bunch of framebuilders and friends and said “Hey. It’s Paul’s birthday on November 2nd, and he wants everybody to ride singlespeeds. You down?” And of course, everybody said yes, I mean what the hell else are you going to do right now? So how do you join us? It’s pretty simple really, go for a ride on your singlespeed, wherever you live, post a photo on Instagram and hashtag it #InternationalSinglespeedDay, and wish Paul and Amanda a happy birthday if you want. Don’t have a singlespeed bike? Zip tie your shifters, or take the battery off your derailleur, maybe? Get creative, there are no rules!

Post your singlespeed bikes up in the comments too.

We asked Paul what the big deal is and this is what he wrote… Read on below! Singlespeeds. Every time I mention this to non-bike people who ask about my company and its progression I always talk about singlespeeding. Then I look at them and their eyes are almost universally scrunched up in a confused look. I can see the gears turning but it’s just not computing. I go on to explain how it changed and quite possibly saved the company back in the day and how I raced single speeds for a while and still…. huh? Way back around, oh 1994, I decided I really needed a stand-out product and as an attention-getter I designed a derailleur and then displayed it at that year’s Interbike, an international and now dead convention of all things bicycle. Back then it was in Anaheim. I fixed one to a bike on a stand in our booth and had it working in all its anodized glory. 1993 or 1994, this is the machine that made the first derailleur prototypes…

Turns out there were two other American made derailleurs at that show, except I had the working one. People went nuts. Unfortunately, I was still really business stupid and way too confident. Long story short, we made about 1500 of them before Shimano decided they had had enough of us, and introduced the new XTR. Sales slid, we weren’t cool anymore, and I had bought a bunch of CNC equipment that was not doing much except putting me farther and farther into debt.

Who knew there were some weirdos that had this idea of building a dedicated single speed mountain bike frame and needed a purpose-built hub for them. These Ventana frames had 135mm spacing and there just wasn’t anything available then. So, I made some. We called them WORD hubs. Whacky One Speed Rear Device. These were my friends after all, albeit really goofy friends. And their “team” was called the Amigos. They did races in orange jumpsuits converted to knickers with the sleeves cut off. I had no idea at the time of the importance of this project to my company’s health and legacy. I made a handful and showed them at the next Interbike and by golly, other people wanted them too. My company had shrunken to just three people, but we still had a foot in the game! (Also, I didn’t want to go find a job…)

Welp, it worked. People got into it. Part of it was just individualism, and part of it was a backlash against Shimano cramming more and more gears and tech features down our throats. This whole idea that you have to use every part of a group to make the shifting work was still pretty new and that just didn’t sit well with veteran bike dorks. That was the very first dedicated single speed hub for mountain bikes ever made. I’m proud of that. Then Bianchi needed some marketing juice, and Sky Yaeger (who was the product person over there) contacted me about putting our hubs on a production bike, the B.O.S.S. (Bitchin’ Orange Single Speed.) I jumped at that chance and gave her way too good of a price, and we were off. I got the order for 350(?) hubsets and started in on them, running almost the entire batch by myself, late at night, one by one. Still not too smart about business, I probably just barely broke even on that first order. I’m sure I made less than the minimum wage, but this was the first production singlespeed bike and it got a ton of press, and my name was on every hub. That part worked out swimmingly. I also ate a lot of Top Ramen during that time, but I kept the company going. I even went so far as race these nutty contraptions a few times. I think I did the Downieville Classic four times, and two Single Speed World Championships. Downieville is a BRUTAL race that starts right off with an 8 mile/3400 ft climb with total exposure. Ooofffff…that always hurt. My lungs don’t work so great, but we dressed up and made a day of it. Not one of those races did I get to complete. The sweeper always found me struggling in the last four or five miles and took my number plate. Whatever. I did it. The last race I did was a life changer though. I had some ridiculous outfit on and had reached the top, Packer Saddle, but I could hear the support motorcycles closing on me quickly. I wasn’t having the best day….until I was handed a margarita. Then and there I made the decision to never race ever again but instead, to do that: hand out yummy party favors to racers. From that point forward I’ve had what many people would call the best aid station at any race we show up for. If you’ve done the Lost and Found, Grinduro, the Downieville Classic, or the SSWC in Bend, you know what I’m talking about. 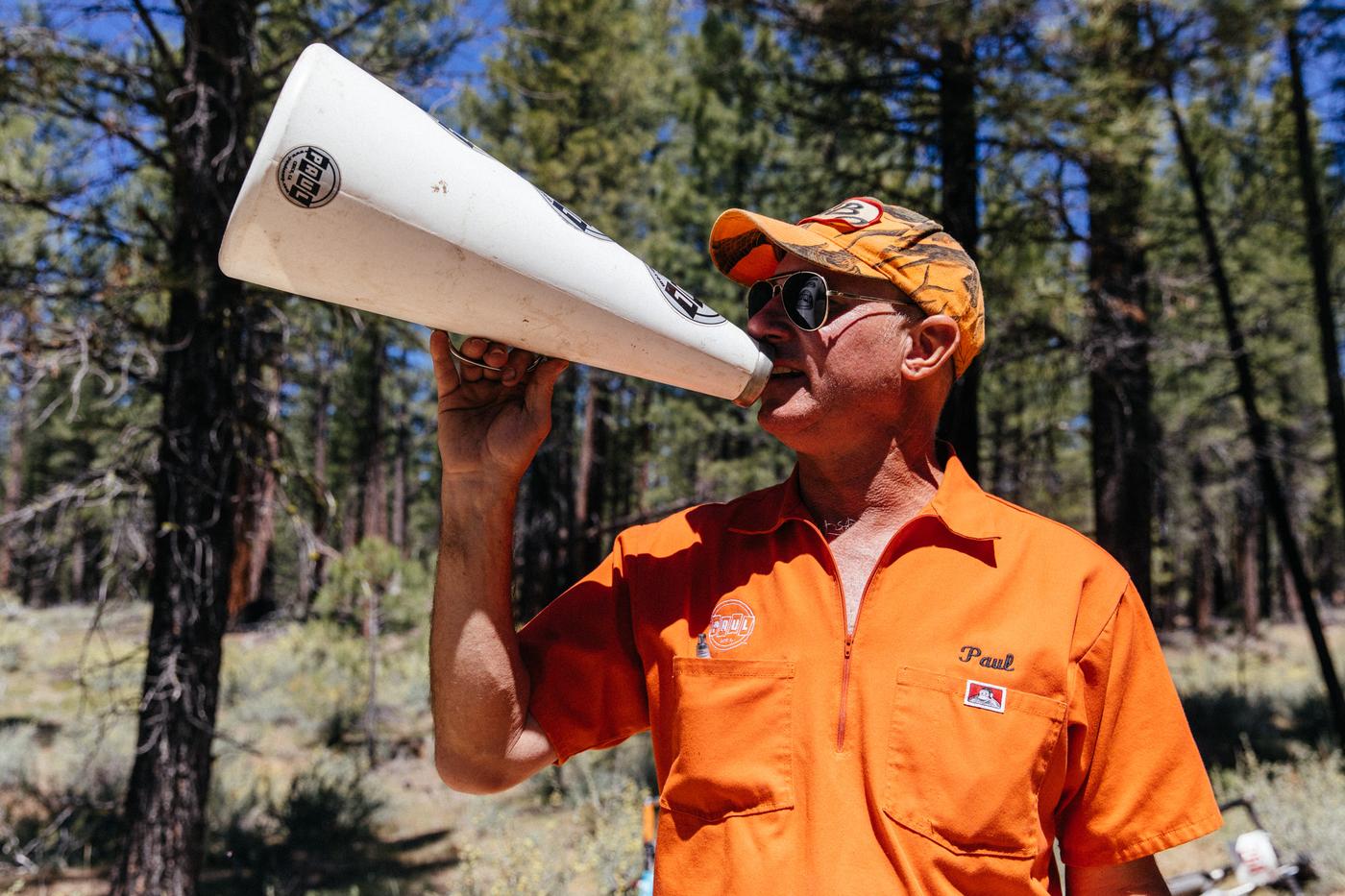 Still though, it’s always exciting to cheer on the first few racers and every singlespeeder that comes through. I still marvel at how fast and towards the front the first ones are. Then, with each one that comes through there seems to be an attitude of “Yeah, I’m crazy riding this bike, but I wouldn’t have any other way. It’s so fun and pure. Can I have another beer please?” While not racing anymore I’d found a way to still be with my people.