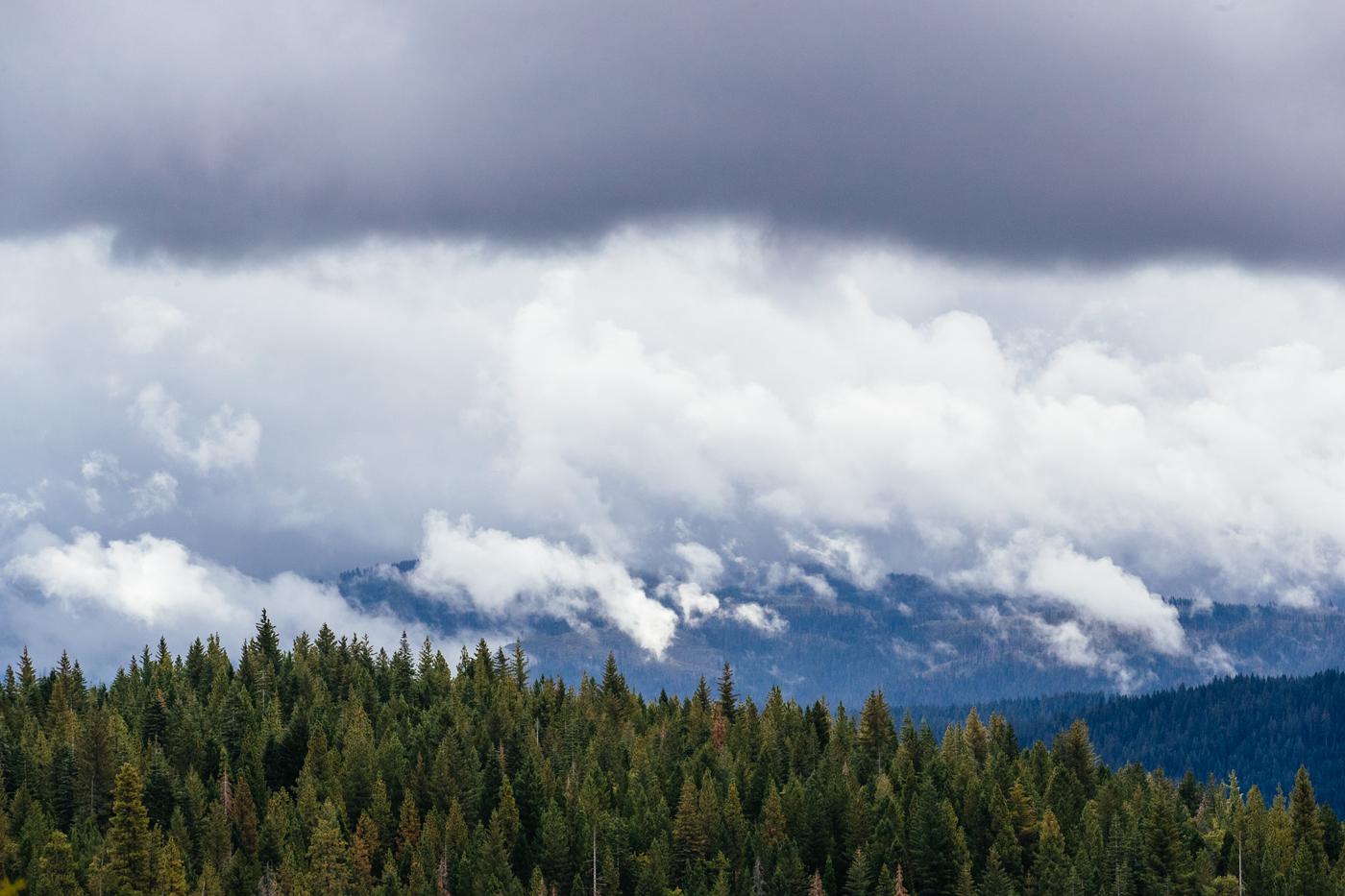 For starters, I pinched a nerve in my lower back fishing the week before. I’m sure riding a hardtail in Downieville that same week didn’t help either. The days before the race, it wasn’t getting any better so I sent out an SOS to the event’s organizers seeing if I could wrangle up an e-MTB to cover the event. It wasn’t until Mark Weir from WTB and Bosch lined me up with a Cannondale e-bike that I felt like I would be able to do my job.

That wasn’t the case, however. My back was really messed up and simple things like getting out of bed or putting on my shoes were excruciating. Stretching, yoga, and Advil weren’t exactly fixing it either. Am I too over the hill to ride up this mountain, twice? Fuck. 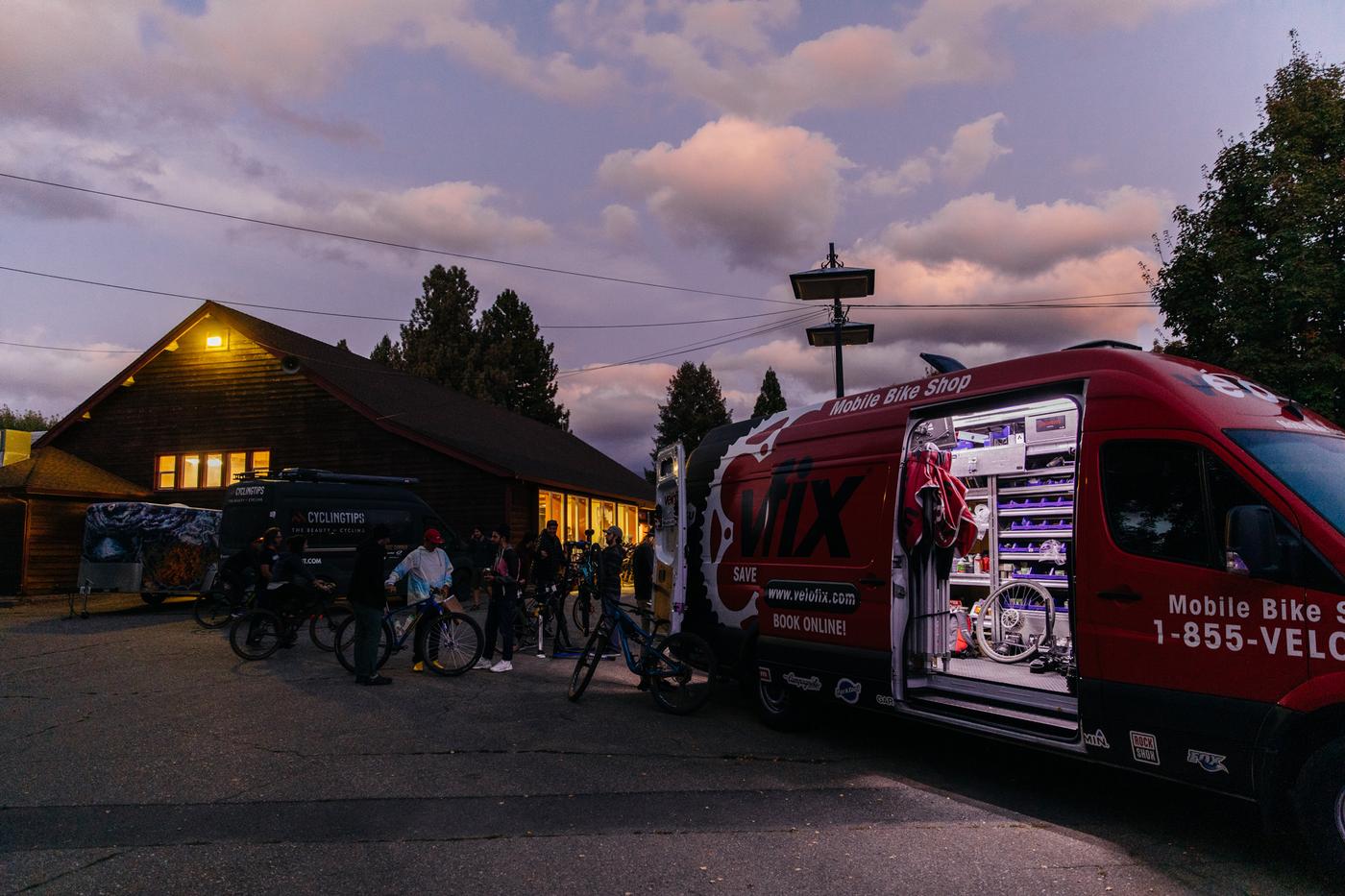 On top of that, a forest fire had broken out in Taylorsville, the lunch stop for Grinduro, so the Sierra Buttes Trail Stewardship would have to re-route the course, last minute, adding 2,000 feet of elevation to an already challenging ride. Now we are at two strikes down. Might as well make it three…

The Sierra received its first dose of winter weather this weekend and I think everyone was refreshing the radar before going to bed the night before the race. It did not look good. 60% chance of rain with a high of 50º and light snow. Perfect riding weather for a bunch of Californians and visitors hoping for one last hurrah of warm weather before winter rolled in. Meanwhile, Team Brooks assembled in the sleepy town of Quincy, with a new member, Hailey. 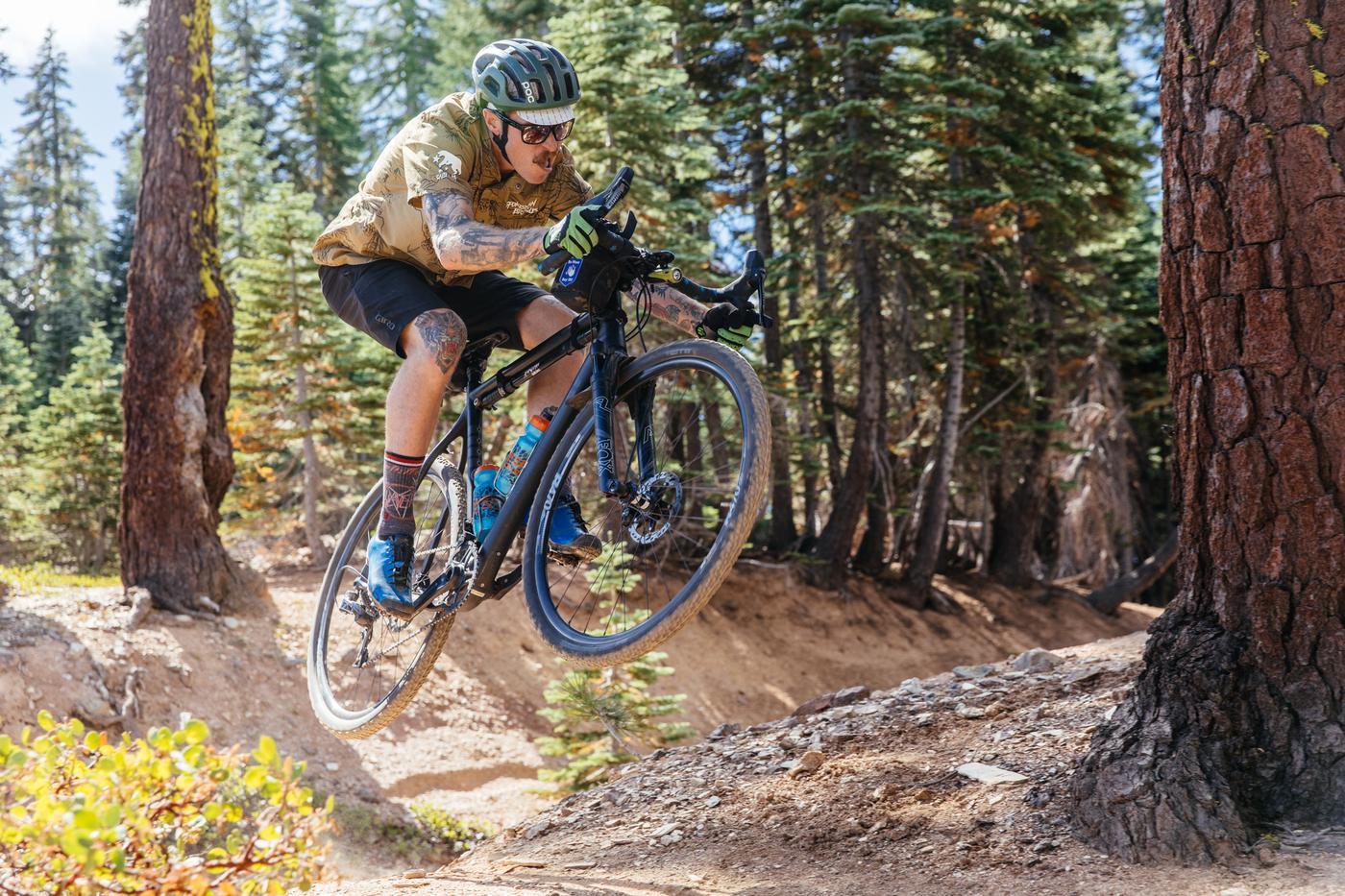 The day before, my back was feeling better, so I tried to go for a pre-race shuttle. Bad idea. I hobbled back to camp and headed to shoot the 8 bikes on display in the Grinduro Hall.

Then, I smoked a joint with Leo and realized that out of anyone else at the event, no one had to overcome more uncertainty. The dude has one leg. Leo lost his left leg in a motorcycle accident. He’d also never been up to the top of a real mountain or ridden any singletrack other than the trails he has in Florida. After Kanza, Leo really wanted to do the entire Grinduro course. I don’t think anyone ever said it but we were all rooting for him. Suddenly, everything fell into perspective.

All that pain I was feeling, all the worrying about the weather and the re-route which boasted even more elevation gain than the original course. All these things that were keeping me up at night were just blips on the radar of life and its challenges. Leo has one leg and was about to take on a 50 mile, 8,000′ course.

The night before the event, I slept like a baby. 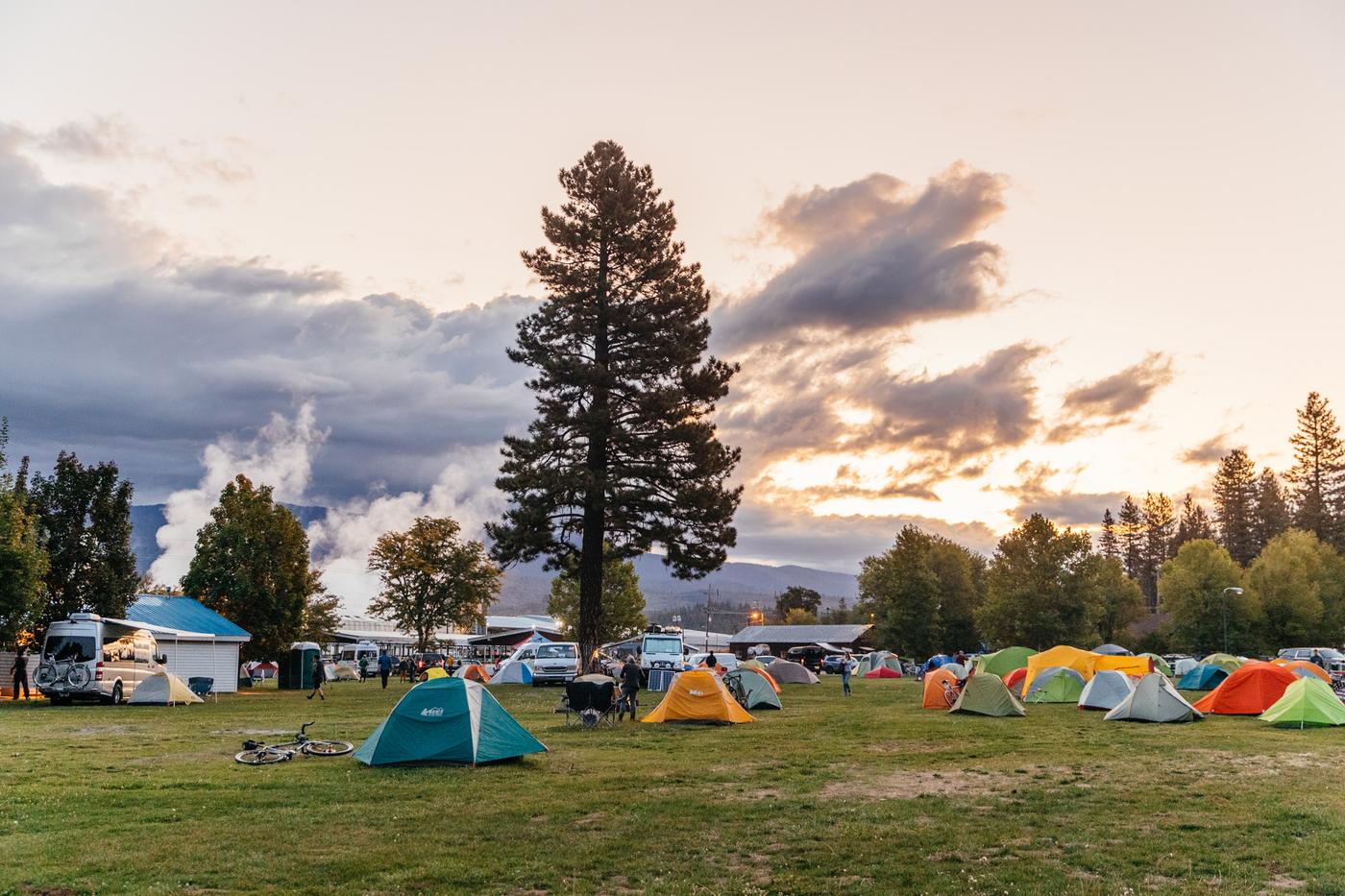 Come morning, I couldn’t get out of bed. I sat there, breathing and stretching. There was no way I was going to be able to shoot Grinduro. I might have cried for a little bit before slowly sitting up. One step at a time. Ok, I’m up. I pull on my pants. Put on my socks, shirt. Pop some Advil and stretch. Finally able to get out of the tent, I went looking for help.

Debbie from the Sierra Buttes lined me up with some light pain killers and some warming back patches. Mark Weir gave me some extra e-bike batteries that I gave to people who were going to be on the course. I pulled on my albatross, er I mean camera bag and got on my bike. 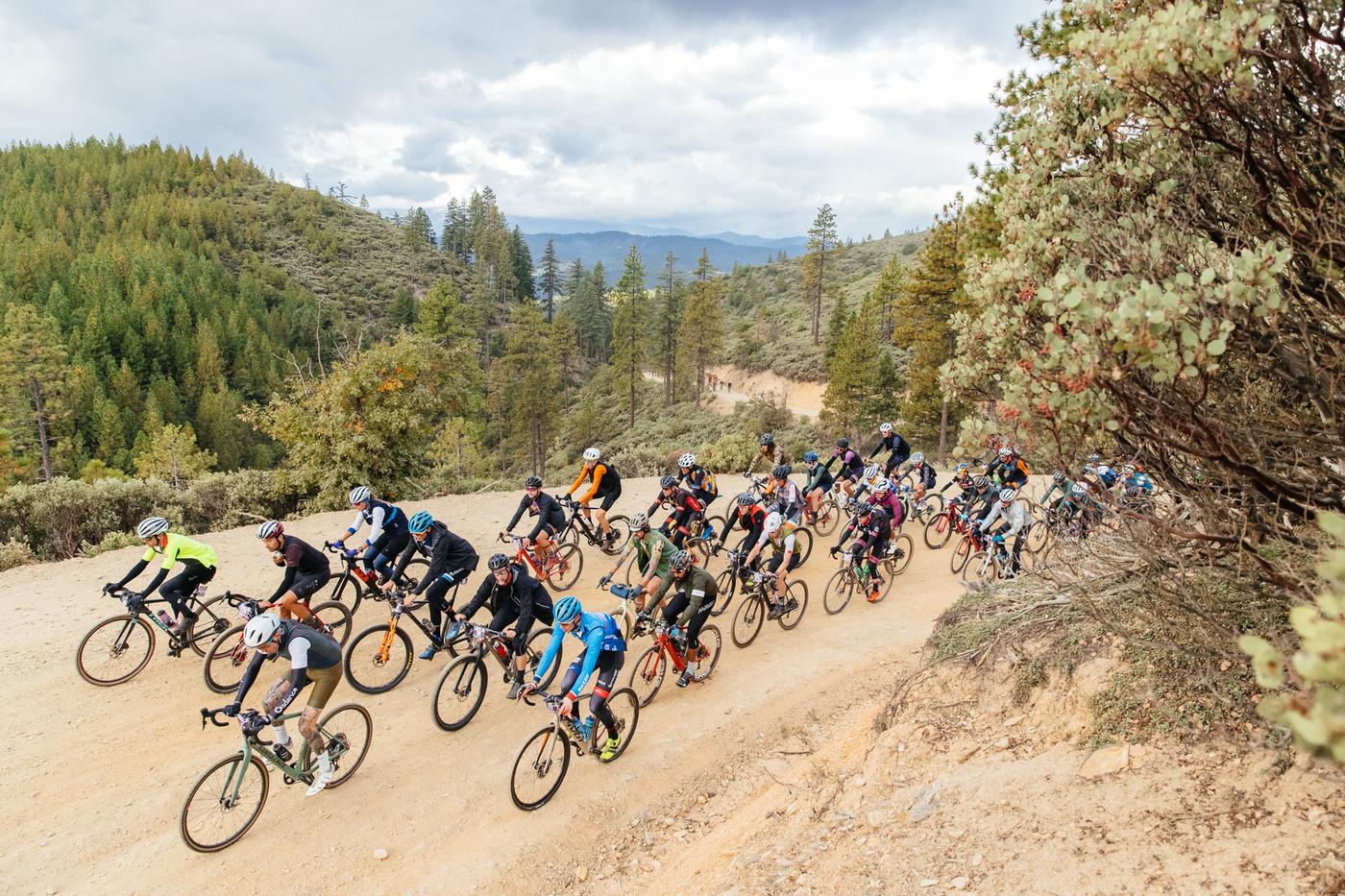 The rollout was massive. Over 1200 riders queued up and I took off down the course, ready to spend a solid 8 hours out in the mountains above Quincy. Oh, and the sky was black. It didn’t take long for the rain to come but with it, the most beautiful rollout I’ve ever seen for the race. As a rainbow embraced the sky, people were exclaiming how awesome the weather was. As the sun would break free, the rain cascaded to the dry and dusty roads. Leo, Bené, and Namz began to climb, smiles abound. The rest of Team Brooks dropped the hammer and took off up Mount Hough. 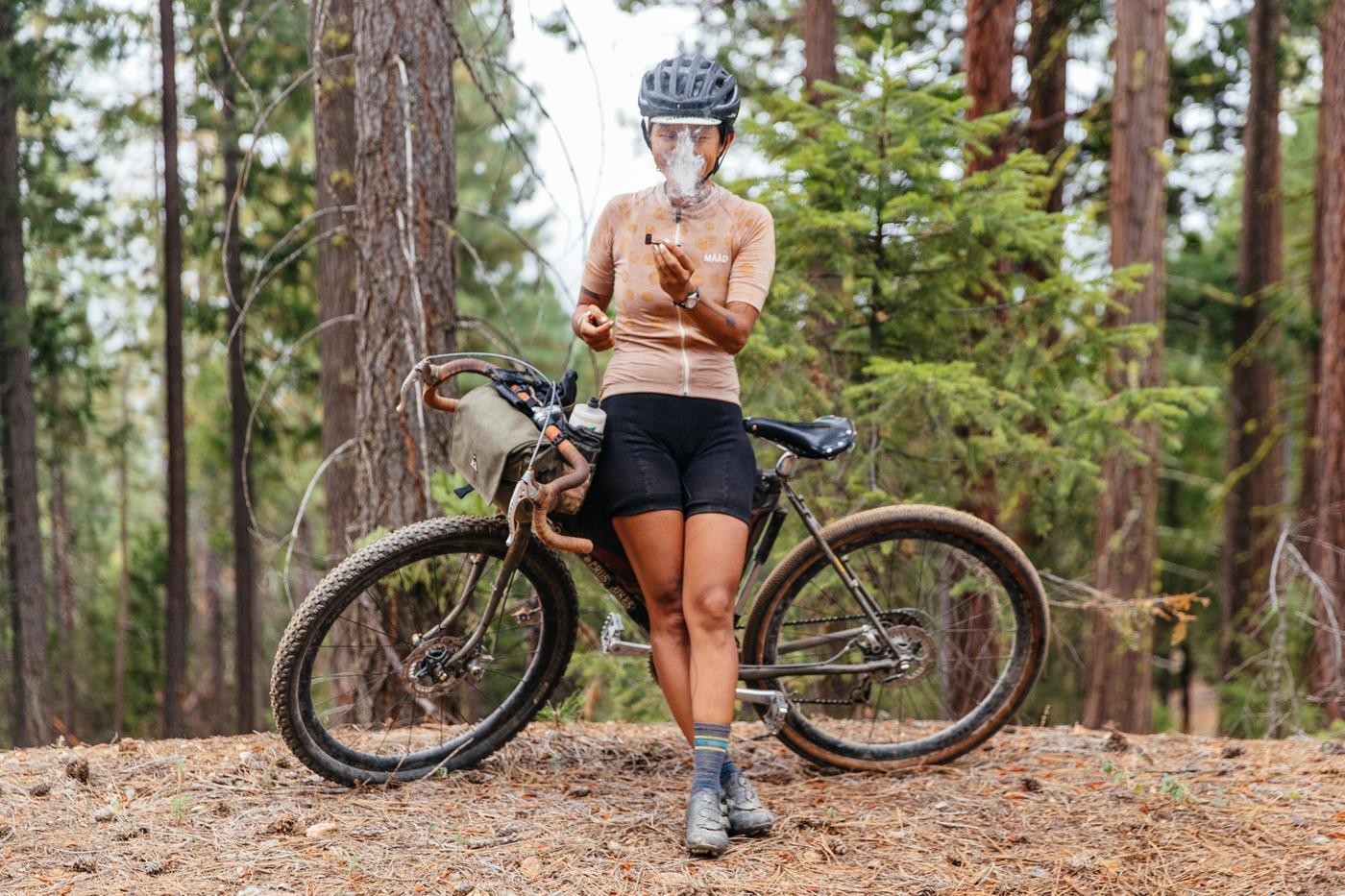 Since landing in California, Leo was stoked on the availability of weed, so we were all smoking jammers on the way up. My back was feeling better, or at least the nerve endings were lost while attempting to deliver the message of pain to their receptors.

After the first segment, my battery was already low, so I headed to the lunch spot for a quick battery change and waited for the racers to roll through. 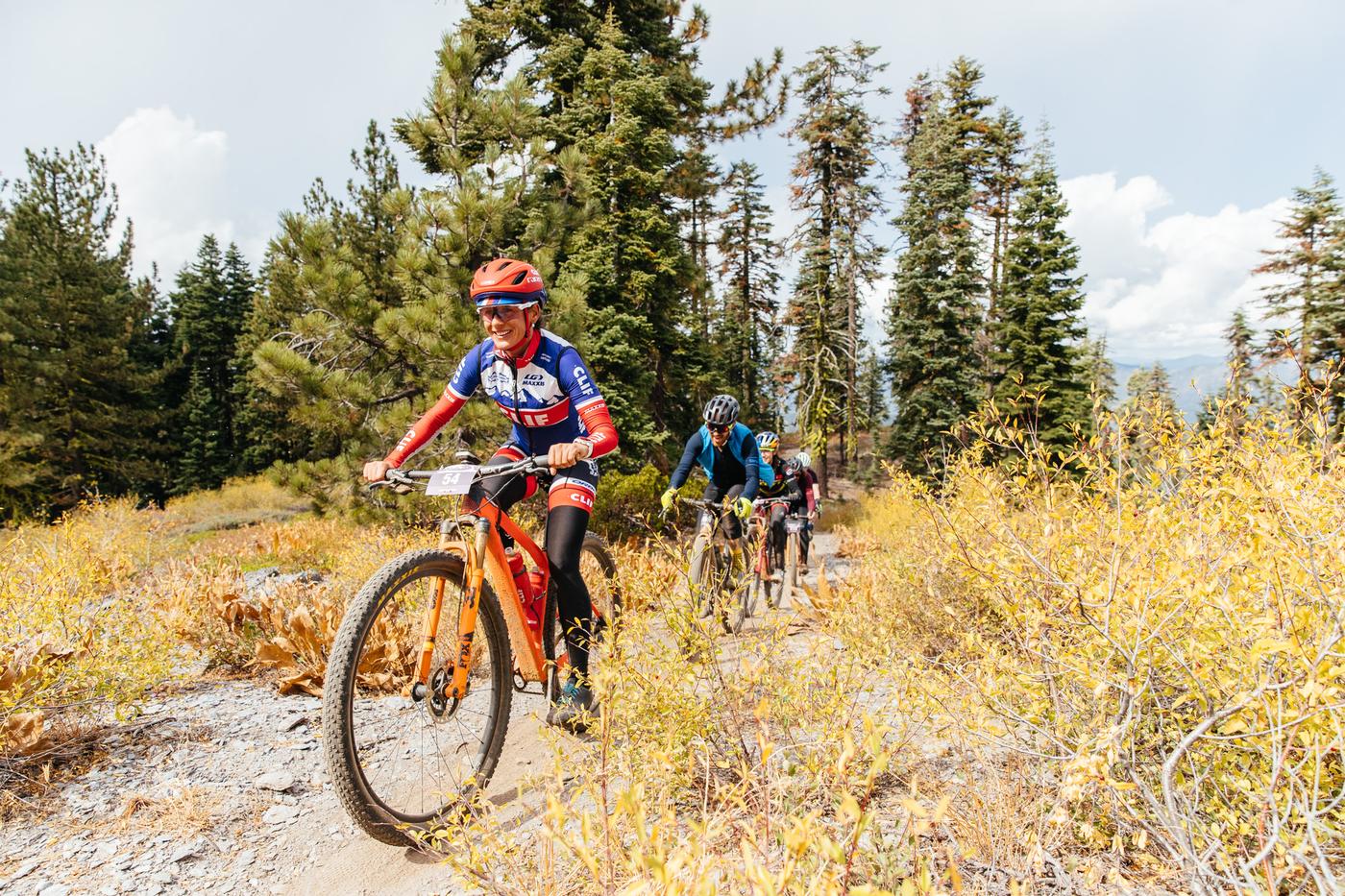 What came next was a beast of a climb. As if the Old Ones themselves carved a dirt path to the top of the Mountains of Madness. Deceitful signs along the way proclaimed that we were almost there. Lies! Two miles later and we crested Mount Hough as snow began to fall. With the change in weather, my pain killers began to wear off, and I had to get rolling. The 14-mile singletrack descent kept my mind off the pain, meanwhile, a part of me was hoping Leo, Bené and Namz were on their way through the course. I wanted to wait for them at the top but the weather was not looking good and my back was throbbing. Once you stop moving, your body begins to tighten up. I had to jam back to camp. 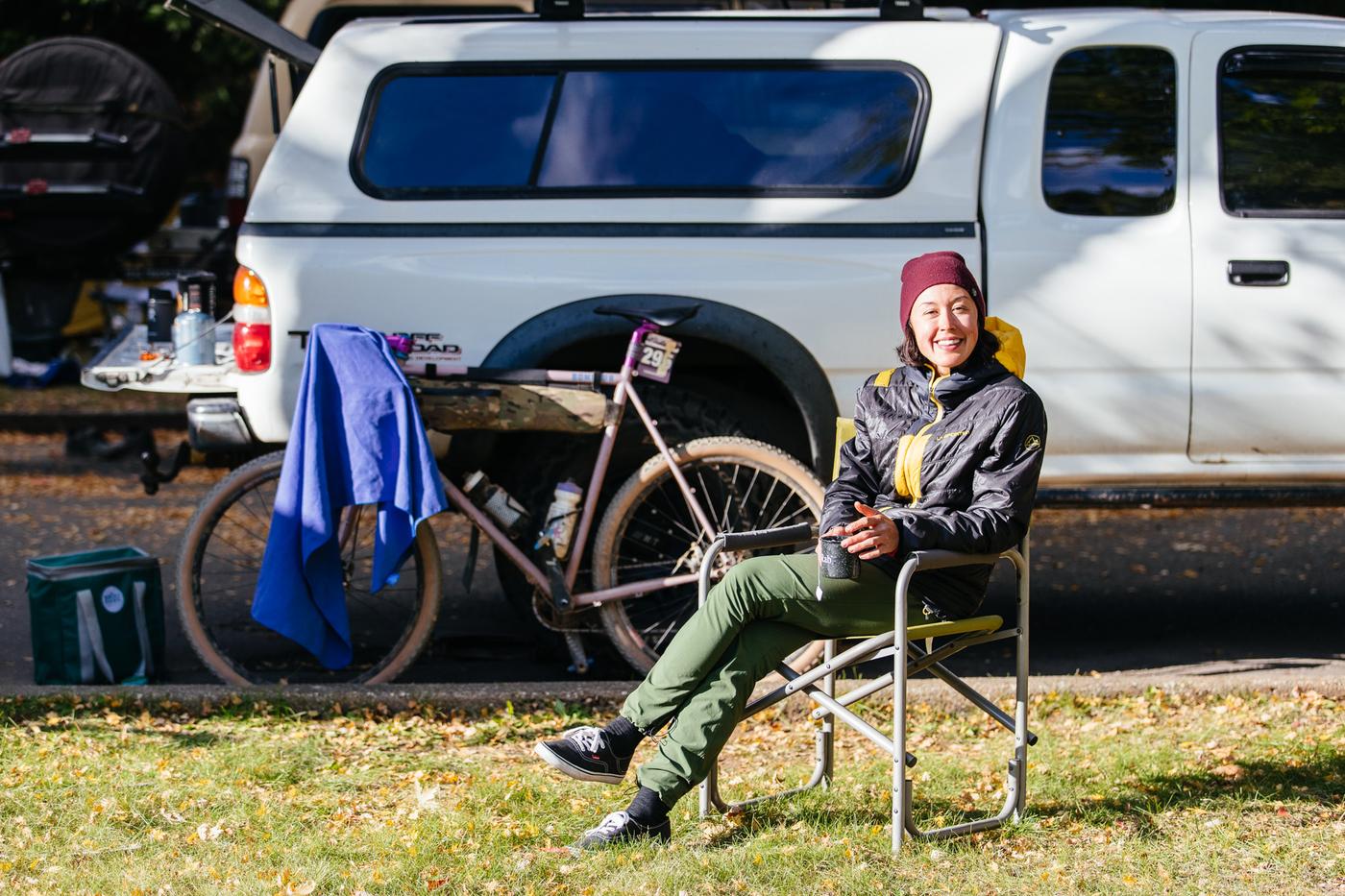 Hours passed. An announcement came on the PA proclaiming that the sweepers were out, closing the course. Leo and Bené weren’t back yet. Come on guys! You’ve got this! As I went back to my truck to get a warmer jacket, I saw him. He was in a chair, scarfing down food and laughing. He had completed the course, fighting the sweepers. “I’m finishing this damn race! I’ve got one leg!” he jokingly proclaimed. 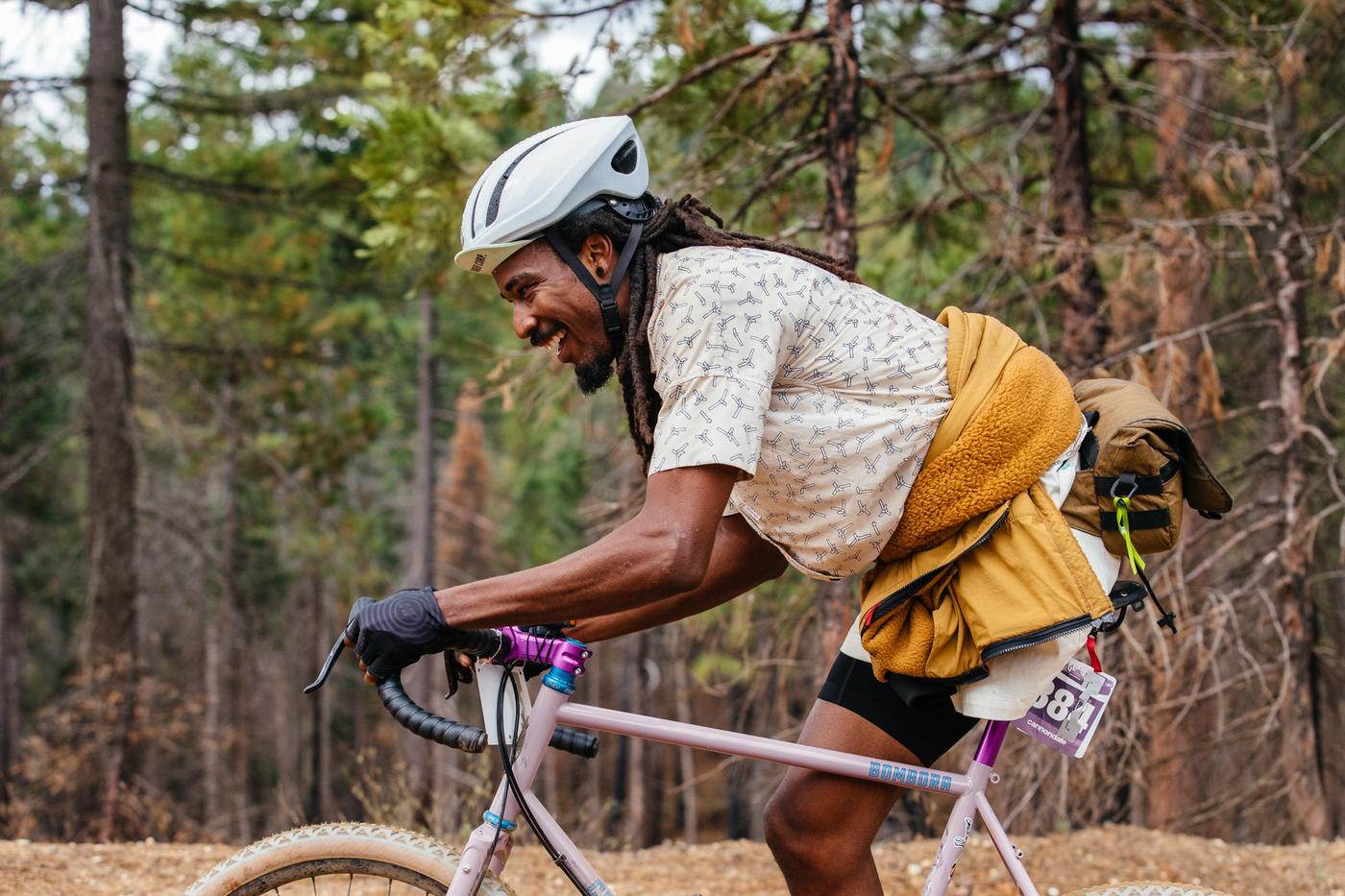 Leo, a man that overcame great odds, uncertainty, and could have easily given up on riding bikes when he lost his leg, pedaled his ass 50 miles and climbed over 8,000′ in elevation. Uncertainty is what makes us stronger. Next time you’re full of self-doubt, remember Leo.

If you’d like to use a photo from this gallery, here’s a Dropbox link with a wider image edit. Please, these are for personal use only!