As residents of the desert state of Sonora when not touring, Radavist contributors Daniel Zaid and Karla Robles decided to pay a visit to the lush state of México further south. Daniel teams up with Nicolás Legorreta, the physicist, cyclist, and nature enthusiast behind the bike bag company Peregrinus Equipment. The two embark on an overnight tour, starting at the 15,000’+ reaches of the volcano Nevado de Toluca and making their way back to Nicolás’ home of San Simón el Alto. With a route that’s all downhill, what could go wrong? When Karla and I decided to go to México City we got in touch with Nicolás Legorreta, founder and owner of Peregrinus Equipment, which is a worthwhile story for another time. He told us he lived in the city, but his workshop was in a small town to the west—about two hours by car—named San Simón el Alto, in the state of México. He invited us to come to visit the shop and made time between his duties to fit in an overnighter. Nicolás came up with a plan which consisted of driving to the top of the volcano Nevado de Toluca and then riding our bikes back to San Simón el Alto through a series of dirt tracks that serve as logging and fire roads or connectors between ranches.

The many curves of the road to the Nevado made for a very dizzying ride; the Nevado de Toluca is about 80 km (50 miles) west of México City, and its position at 4,645 meters (15,240 ft) above sea level makes it the fourth highest peak in the country. After arriving at the parking lot almost at the top of the volcano, we aimed for the crater, but the precipitous elevation made the matter of the short walk more of an effort than we’d expected. The slow steps and frequent breaks we took made me feel like we were in an Everest movie but, with a little patience, we reached the edge of the crater and were able to see the two lakes inside it. Once back at the car Nicolás and I loaded the bags on our bikes, then Karla snapped a photo of us and headed back to San Simón. Nicolás and I started our long descent among dense fog and fields of rosa de las nieves in full bloom. This hearty flower, indigenous of this area, is able to resist high winds and low temperatures and enters a state similar to hibernation during the cold months where it seems to be dry, but it comes back to life again during the summer. Nicolás told us that this flower was used as a token of eternal love because of its longevity, and the added value of having to go up in the mountains to get it.

Nicolás is an avid mountain biker and I saw him flow down the hill while I took my time, as usual. Soon we were back below treeline and with hot brakes we arrived to the town of Raíces, right at the base of the volcano, where they sold all kinds of beanies and warm clothes for visitors underprepared for the altitude which was lucky for us as a dog had stolen Nicolás’ banana. After leaving Raíces behind, it didn’t take too long for us to find ourselves surrounded by a dense forest. The amount of green—with plants growing on other plants—was pretty shocking for a desert dweller like myself. I was so happy and grateful to be where I was, and took time to appreciate my body and bicycle that brought me here. We reached a small town and took a wrong turn but, instead of going back the way we came, we decided to cut a straight line back to our route, which soon proved to be a big mistake. We walked across a muddy potato field then pushed our bikes down a steep hill just to push them back up again, which was foreshadowing for the coming—but as yet unbeknownst to us—time we would spend pushing our bikes on this journey. Despite this route being a huge net downhill in the grand scheme, I found myself panting at the slightest climb we came across. The majority of the route is above 3,000 meters (9,840 feet) and my lungs were struggling to take in enough oxygen. At the end of the day, my legs were sore despite barely doing any actual climbing and I thought that I don’t ever want to go backwards, to sea level, after struggling through this acclimatization. We made camp at 3,600 meters (11,800 ft) in the middle of the road, as it was the only flat surface around and Nicolás said these roads are used like once a month, or less, so there was little risk of us getting run over. Once inside my sleeping bag, I wrapped my feet inside a little dirty blanket I got from the car’s trunk because I didn’t bring any socks (nor pants), and I had a very active night of dreaming, but I only remember one of the dreams where a red truck was coming and we had to move our tents to let it pass. When I woke up in the morning, a thick fog was all around us, so we agreed to wait for the sun to come out and burn off the fog. Nicolás went back to sleep and I just hung out inside my tent with the various insects that had made their way into my stuff. I didn’t need to sleep anymore but my hands were too cold to ride a bike, safely anyways. After the fog opened up we jumped on our bikes and started what Nicolás promised to be “all downhill from here,” but as is usually the case when that promise is made, wasn’t at all.

At some point, we missed a turn and ended up on a side of the hill opposite to the one we were supposed to be. I usually have a GPX track on my phone, but, in this case, I had just trusted Nicolás to take care of it all, so all I could do was follow him around. In his defense, there’s so many roads in this area that sometimes four or six of them converge and, after a rainy summer, can become overgrown so it is very easy to get lost. Half of our day was spent pushing our bikes up narrow and ridiculously steep trails, some of them ending abruptly or getting swallowed by the forest. Sometime around noon, I was stuck holding the bars with one hand and the saddle with the other one, looking down at the ground as I gathered the strength to take the next step up a hill. A little ahead of me I heard Nicolás celebrate: “We found it, this is the road!” That was the motivation I needed to push-brake-step five more times till I made it out of the forest and onto a two track dirt road. How good it felt to be able to ride again after so much time of pushing! After a while, we made it to a tourist place where the restaurant was closed but a lady agreed to light up her stove for us. After I devoured mushroom tacos, scrambled eggs, and a jar of lemonade, I felt my strength return. As we were getting ready to leave it started drizzling so I put on my old rain jacket, which kept me dry for the first fifteen minutes. The sprinkles escalated to full-on rain and our roads quickly became arroyos. Luckily the mud wasn’t of the sticky kind and we were able to keep a slow but steady pace. Amazing scenes appeared before my eyes, so unfamiliarized with the abundance of water, which I wished I could photograph but my camera was buried deep inside three bags to keep it safe from the water.

A man was next to a crop field sitting on the ground and taking cover under a small piece of plastic that he was holding with his hands, and I thought “Why doesn’t he go home?” Then I imagined he probably thought the same about myself, but we just said “¡Buenas tardes!” to each other and carried on. 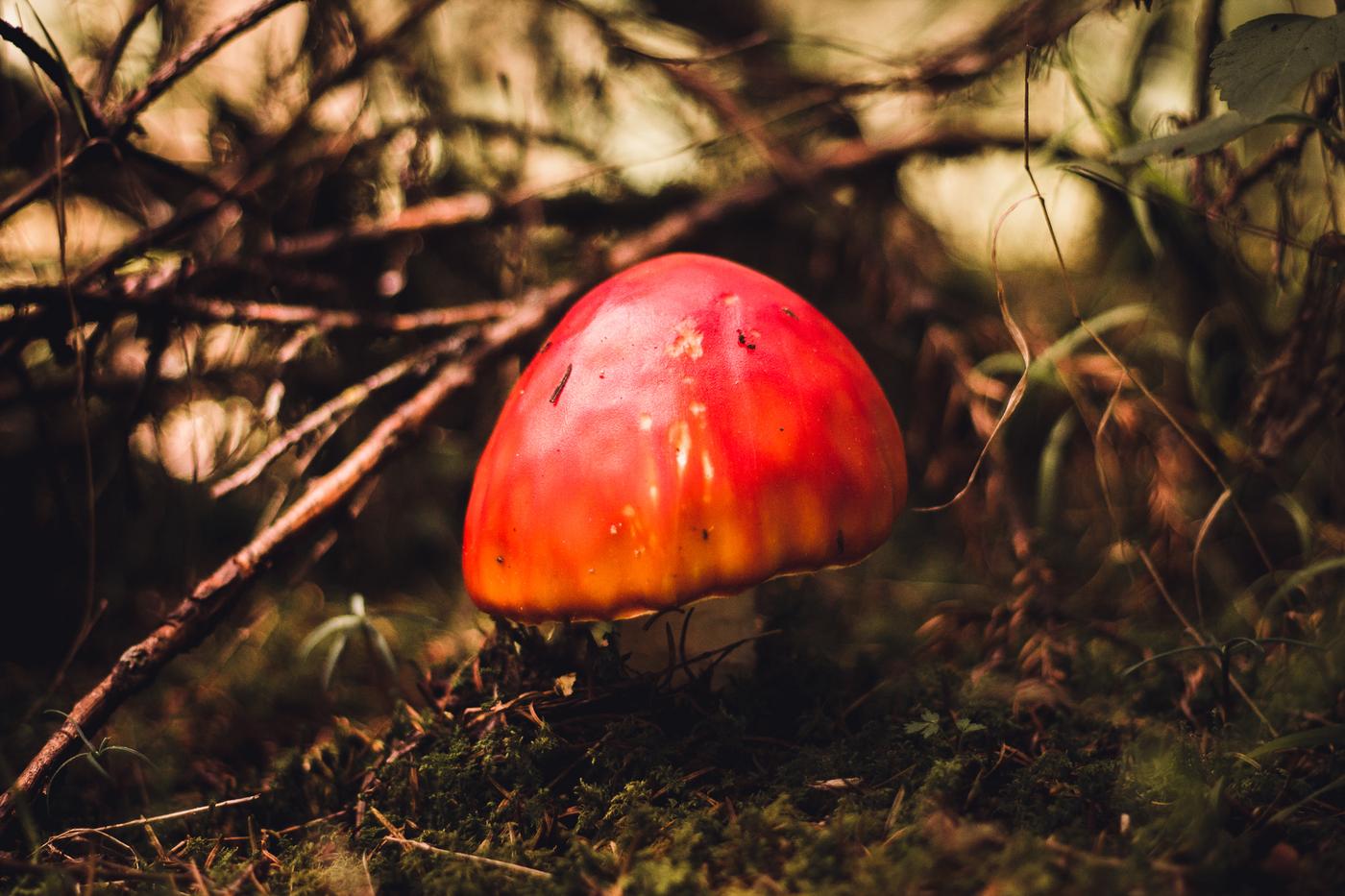 The rain gave us a quick break and Nicolás used it to check the route on his phone and for me to snap one of the only photos of the afternoon. Suddenly our road disappeared altogether into a grass field and we had to do a bit of cross country riding with half of our wheels under water. As the water deepened, I was eventually forced to dismounted and walked in pools up to my thighs till we made it out of the field and back onto a visible road again. It amazed me to see people going about their business despite the weather, but I understand rain is a daily thing around here. Unlike my hometown, where it rains only a few days per year, getting wet is not an excuse to skip your activities. We came across several groups of shepherds, usually an adult and one or two younger members, taking care of their sheep with their hats and feet covered in plastic. After a long and rocky descent my hands were stiff from so much braking but we arrived at a town and a sign outside a school told me that we had made it to San Simón el Alto. Up until this point I had decided to embrace whatever little discomfort I was in, but after knowing we were close to home I allowed myself to look forward to some dry clothes and hot soup. When we arrived at Nicolás’ place Karla came out and asked “How did it go?” but I didn’t know how to start my answer. When we got inside, we found that she had made vegetable stew, which combined with a hot shower, served to start settling the memories of the last hours.