I moved to Los Angeles in 2015. Eons after the “Valley Girl” era of the 1980s. While San Fernando Valley is the birthplace of the “like, oh my god!” stereotype, other neighboring valleys had their own stigmas to overcome. To the Los Angeles locals, Simi Valley will always don the unwelcomed label of “Slimy Valley.” Geographic prejudices run rampant in LA County with many neighborhoods, locales, and even cities, holding xenophobic reserve against their neighbors. Don’t dare say Santa Monica is in the city of Los Angeles! Since I never considered myself a local, or even really lived in Los Angeles long enough to adopt these preconceptions, all I cared about at the end of the day were how good the trails were and how easy they were to get to. Unfortunately, getting from my apartment or office in Silver Lake to Simi Valley means you have to drive. Fortunately, if you choose to ride in the morning, you’re usually in fast-moving traffic, opposing the normal flow of commuters. The same can be said in the reverse. For it being about 20 miles away from my office, the trek to Simi Valley was always worth it. Even if I only rode there a handful of times in the time I lived in LA.

SoCal has some very technical terrain and some amazing illegal trails with perhaps the most infamous being in Simi Valley. It’s not often that you find massive jumps, gaps, rock drops, or roll-ins around Los Angeles. Then again, there aren’t that many illegal trails in the city of LA proper. For that, you’ve gotta go to places like Simi Valley where the craft of carving illegal lines has been going on since the 90’s. If you were a shop rat growing up flipping through mountain bike magazines and watching VHS tapes, chances are you recognize these moon-like rocks, protruding from the ground as they became the backdrop for your favorite SoCal pro’s photoshoots. Simi Valley is in the Ventura Basin, geographically speaking, and since its neighbors are fault lines, there is a rich geologic history. Technically speaking it lies in the Transverse Ranges province which extends for about 300 miles. It begins in the western pan of the southern California coast around Point Arguello in Santa Barbara County. To the east, it ends at the Little San Bernardino Mountains in central Riverside County. The range is only about 40 miles across at its widest part.

This zone is unique in that the landscape is comprised of layered sedimentary rocks, formed by compaction and cementation of sediments over hundreds of thousands of years. These rocks measure about 24,000 feet in thickness, in an area that is only about 10 miles long and 9 miles wide. This protrusion has a lot to do with its adjacency to the Simi Fault, the Burro Flats Fault, and the Canada de la Brea reverse fault. All these fault forces worked in opposition as these rocks slowly breached the surface. Scattered throughout these sedimentary protrusions and outcroppings are a network of trails, offering steep, fast descents with plenty of areas to free ride and hop around on. The problem is, most of these trails are illegal. Wahn Wahn. For the purpose of this shoot, we stuck to the one legal trail in the Rocky Peak area called Hummingbird, which seems to be neglected these days due to the popularity of the ever-changing illegal trails. Still, you’ll see countless brands shooting on plenty of the other trails, which are arguably so accepted by the land managers that a plan to adopt many of them is not too far away. I’ve shot on many of the local trails in Los Angeles but wanted to do something special before I moved from the area. Giro picked Kathy Pruit and Chris Akrigg to model their new trail helmet, the Manifest. The intent of the shoot was to show the helmet on relatively flowy terrain, while mostly keeping both wheels on the ground. For the bigger, all-mountain, and enduro riders, who like to hit big jumps, and are at a higher risk of wrecking from said jumps, Giro has the Tyrant helmet which offers more protection. Language like this is important for product marketing but luckily I took a few shots just for myself, in hopes of sharing them here on the site.

We shot for two days, from sun-up to sundown, taking breaks at high noon to edit photos and juggle other life obligations. We had two wrecks, one from Chris cookin’ a corner too fast over slick sand and rock, and the other with me flying over my bars as my front wheel washed out in a rock garden. Luckily, no one was injured. 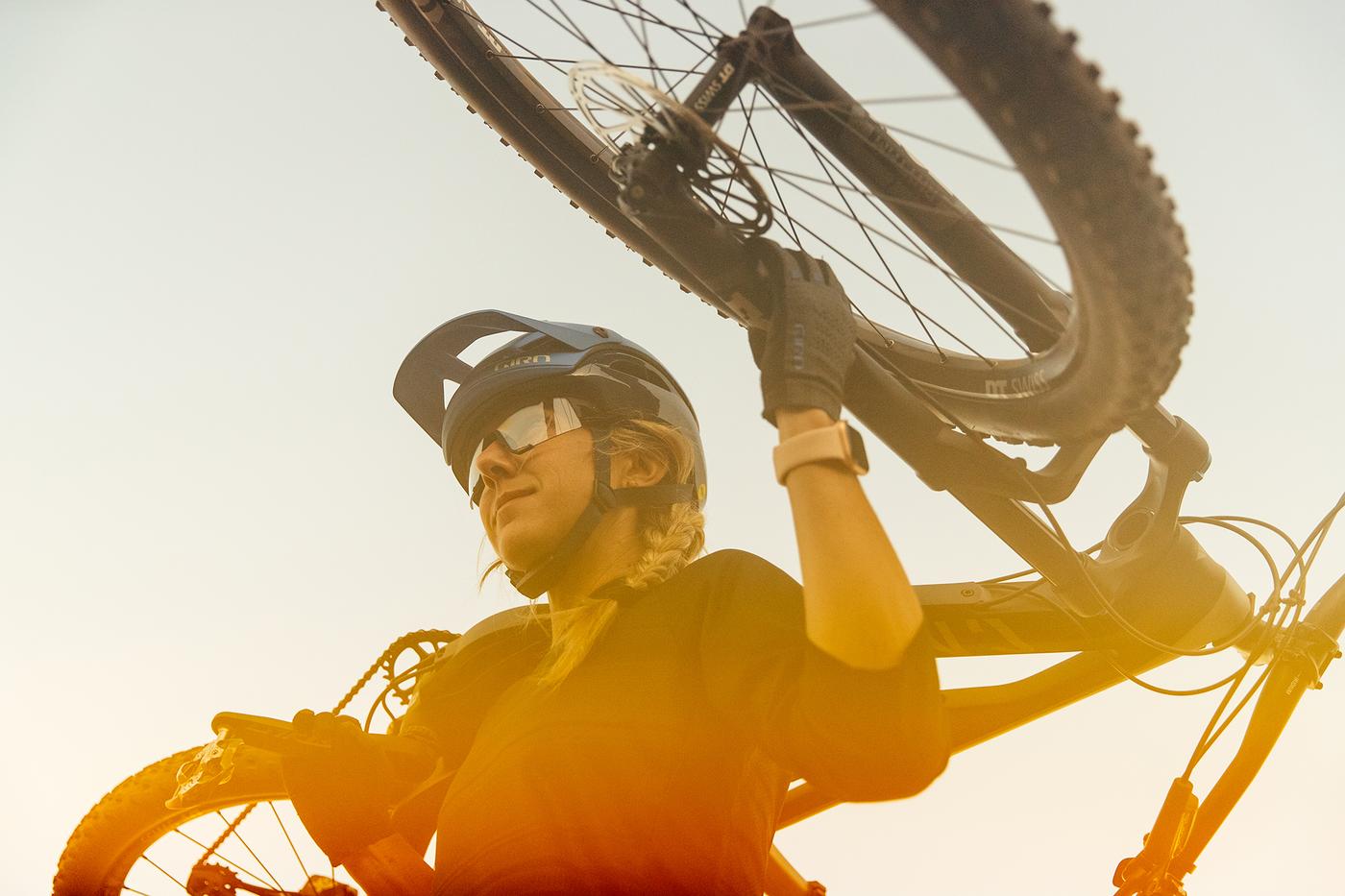 Hanging out with personalities like Kathy and Chris made this shoot enjoyable and having creative control over the backdrop and trails made it feel less like work and more like our day-to-day operations over here at the Radavist: make inspiring images!

Thanks to Chris Akrigg and Kathy Pruit for being such champs and to Giro for letting me run wild on these trails with my camera.