Bang for Your Buck: the Ritchey Timberwolf 27.5 Hardtail MTB - Photo by Kyle Kelley

When I first saw this frameset, I was in love. Why? Well, when a company like Ritchey makes a hardtail mountain bike that only a few months prior was something you had to order from a framebuilder, you know they’re paying attention. Before the Timberwolf, Ritchey’s mountain bike offerings were built with cross-country geometries. Personally, I like slack front ends and longer travel forks. They still climb great but the difference in descending is noticeable, especially after getting bucked for hours on end while riding our Southern California trails. Yeah, the Timberwolf is a new breed of mountain bikes, from a company founded by one of the forefathers of the sport. The best part is, you can get rowdy on this bike for hundreds less than a custom frame.

At $899, the Timberwolf comes as a frame with bright orange paint and classic Ritchey logos. Or you can buy it complete, as equipped here for $3,499 (minus the dropper post.) When people email me asking what mountain bike frame they should start out with, if buying used isn’t an option, I point them to the Timberwolf. Why? Let me break it down… 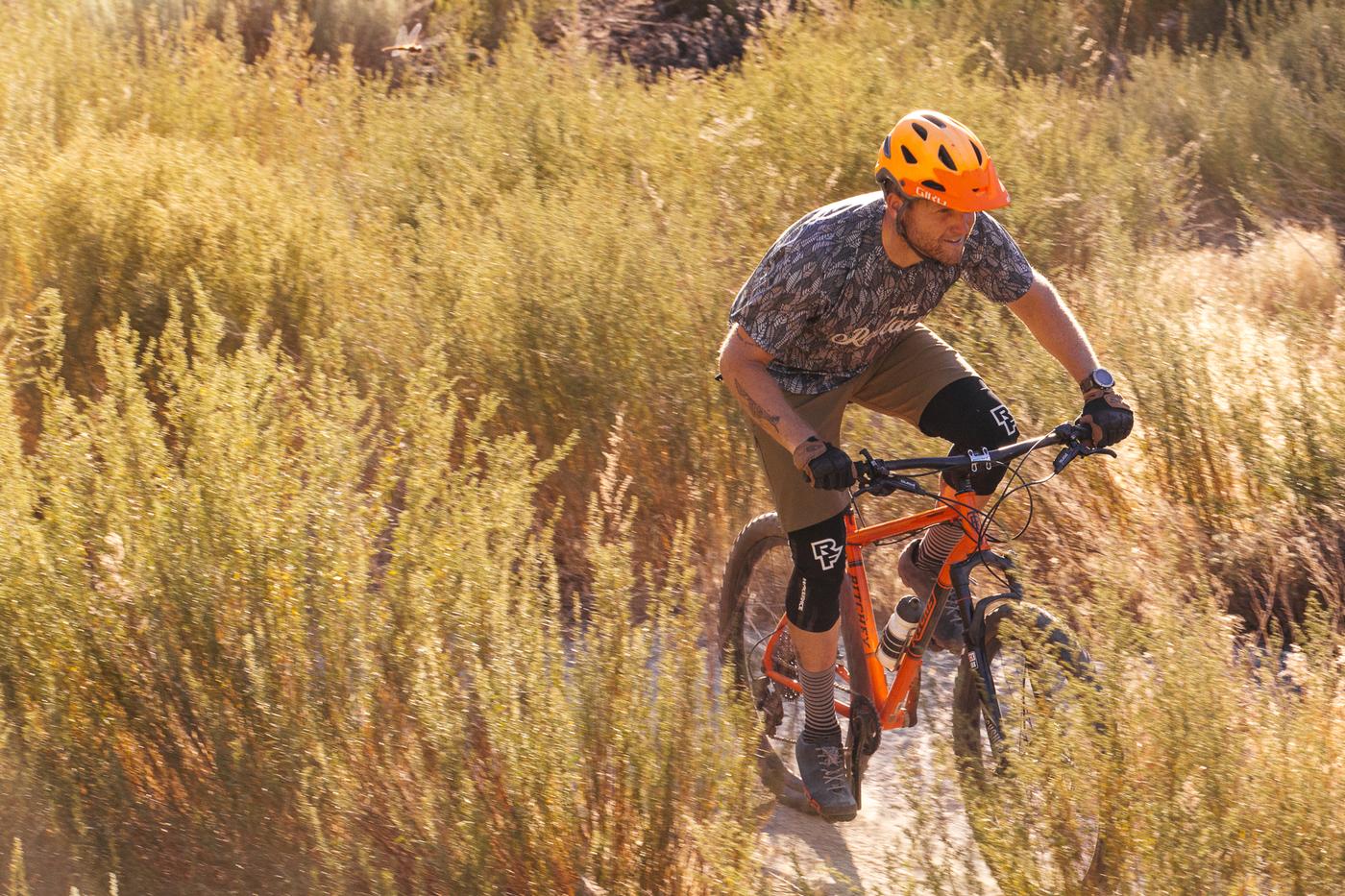 Shred for Your Buck

Yes, $899 is around half as much as most builders charge for custom steel hardtail and while there are other production bikes on the market similar to the Timberwolf, they aren’t nearly as light, nor as nimble feeling. The Timberwolf feels lively and while a lot of that has to do with the geometry, the Ritchey tubing definitely aids in that. 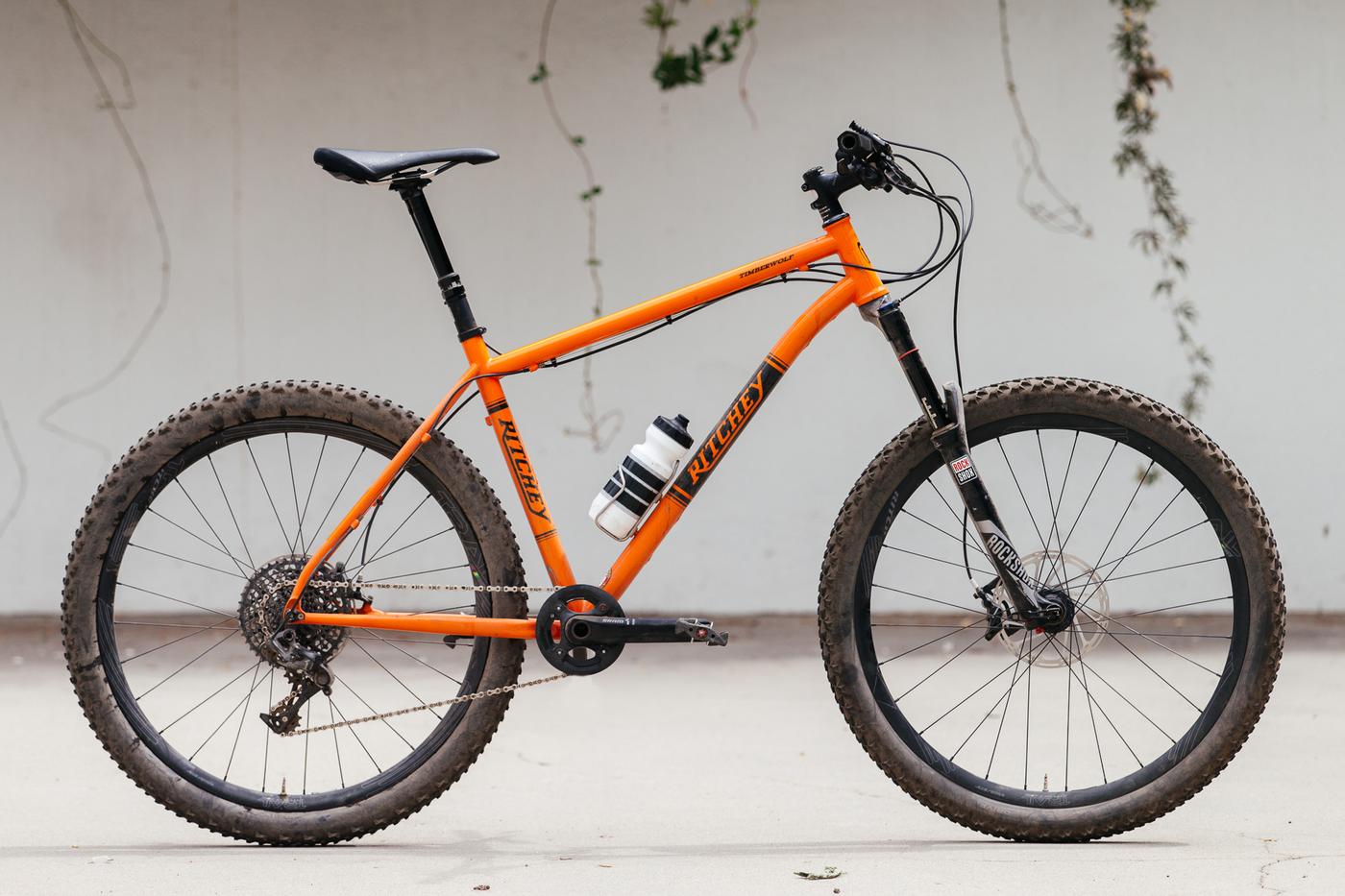 Complete but Not Cheap

Some people would say that $3,499 is a lot of money to drop on a complete steel hardtail, yet if you look at the components, Ritchey didn’t exactly skimp on anything. The Ritchey Trail wheels are super solid and plenty wide, with an internal width of 25mm. They weigh around 1650g for the set and I didn’t have to true them once in the few months that I was able to ride this bike. Next up, the drivetrain. SRAM’s 1x drivetrain doesn’t skip a beat, and it comes with the XD 10-42t cassette. The bike I reviewed came with Guide brakes, although Ritchey’s spec sheet calls for SLX.

The Rock Shox Revelation fork was plenty capable of tackling my local trails, yet took some getting used to after riding a Pike for so long. It’s not nearly as stiff, nor as heavy, yet I was still able to dial in the settings to my liking with ease. All this gets steered by the 35mm Ritchey Trail stem and bar, which save for the length of the stem, was a super solid setup. Personally, I’d rather run a 50mm stem, but since even the size large is a little short on me, the longer stem helped with fit. My only upgrade I found necessary on this build was a dropper post, so a Rock Shox Reverb I had in my parts bin worked fine, except for the fact that it wasn’t the Stealth verson and had to be run along the top tube, rather than through the stealth port on the seat tube. Point It and Go

Yes, hardtails take a bit of finesse to be able to hang with guys on full suspensions, and I’d argue their geometry is more important to maintaining speed and control than most modern full squish trail bikes, where the travel will soak up any of your riding mishaps and nuances. On a hardtail, if you line something up wrong, you’ll pay for it.

While the full suspension market relies on incremental improvements, hardtails have to follow suit with leaps and bounds. For instance, before Scott made their bikes with a 69º head angle, you had to look to the likes of Engin and Cromag to get a slack head angle. Now a lot of builders are going as low at 67º and even as I’m typing this, I can hear someone’s comment being posted about how other companies are going even slacker… Bottom brackets are getting lower and with the longer dropper posts becoming available, the front triangles are getting even smaller. Not to mention boost rear ends and yokes allowing for plus sized tires. Yeah, today’s hardtails are a different beast from what Tom was building in his garage all those years ago.

Ritchey took a stance with the design of the Timberwolf. They’re comfortable with a 140mm fork and a 67º head angle. For the masses who would or have bought this bike, it’s more than capable. If you wanna pack in a lotta rubber, the frame will clear a 2.4″ tire with ease. You can do everything from bikepacking on it, to racing XC or even just going out for a full day’s worth of singletrack. The Timberwolf looks great, rides great and has components that won’t leave ya stranded on the trail. It weighs in around 28lbs as shown for the size large with a dropper and a bottle cage. You can buy it as a frameset and swap your old parts over, or pull the trigger on the complete build. Either way, you won’t be disappointed. In an age where full suspension bikes can exceed $10,000 for a complete, it’s nice to be able to shred a bike like this for under $3,500. If it were mine, I’d keep it as pictured here and ride it into the sunset every chance I’d get. As with all Ritchey frames, you can add a Heritage paint job for $450! A commando-painted Timberwolf would be so sick!

Head to your local Ritchey dealer to check one out and ask any questions you might have in the comments!