In March 2015 I departed from my hometown Hermosillo, in the northern state of Sonora, México, on my very first extended bike trip. After three years of slowly saving money and getting the necessary gear, I quit my English teaching job and told my family I was going to the city of Guadalajara, about 1500 km (937 miles) south, just to pretend I had a goal; the truth is I didn’t. I was going to take the highway South thinking I could either quit whenever I felt like it or ’till my funds ran out. Days before my departure, my friend Javo said he’d come along since he wanted to make sure I made it safely out of Sonora because two bikes are stronger than one on a highway without a shoulder… He bungee-corded a sleeping bag and a backpack on the rear rack and a basket on the front and after my mom took a photo of us, we left. A late departure and our poor fitness made for a hard first day, and we ended up hitchhiking to avoid riding after sunset on a shoulderless highway. A few days later and with his rear wheel showing several broken spokes we reached the last city in the south of Sonora, where he took a bus back home and I continued on my own. Fast forward to six years later, it is Javo now who tells me he’s leaving town on his bike, without a fixed plan nor return date, and only one goal: he promised his mom, who lives near Guadalajara, in the state of Jalisco, that he’d be with her on Mother’s day, May 10th. So it only seems fitting that I come along to make sure he gets safely out of Sonora. You might have seen Javo in a couple of my other stories; after a few bikepacking trips and his years as a bike messenger, he’s definitely not new to the world of carrying stuff by bicycle, but this will be his first time touring for so long, and solo. A few days before the departure I meet up with him to talk about the last details, and as we’re about to go home he finds out his 30 or so year old bike’s steel frame is broken, and not just a small crack: the downtube is almost completely split, barely holding on by a few millimeters, right at the lug that joins it with the head tube. “That explains the sound I heard on my way here”, he says stoically. I escort him to his house, warning him about every pothole and bump I can detect. After weeks of seeing him selling or giving away most of his stuff and even moving out from the place he was renting, it seemed like he still needed to pass one last test. But Javo isn’t one to succumb to obstacles. The next day he savages a neglected Galaxy branded bike he had seen at a friend’s yard, very similar to his broken one, moves the parts to it, fits the bags, and soon is once again ready to go. He keeps a broken spoke unrepaired, probably as a memento of our first time. At last, the departure date arrives and we join a group, mostly formed by women, who were riding to the city of Guaymas just like us, which made the several hours battling a headwind much easier and enjoyable. Once in Guaymas the group gives us their good wishes and goes back to Hermosillo, and Javo and I make camp on the beach where I spend the night shivering because in the name of ultralight touring I only brought a bedsheet. I knew I would be cold but it would be only one night, so I decided to embrace discomfort. 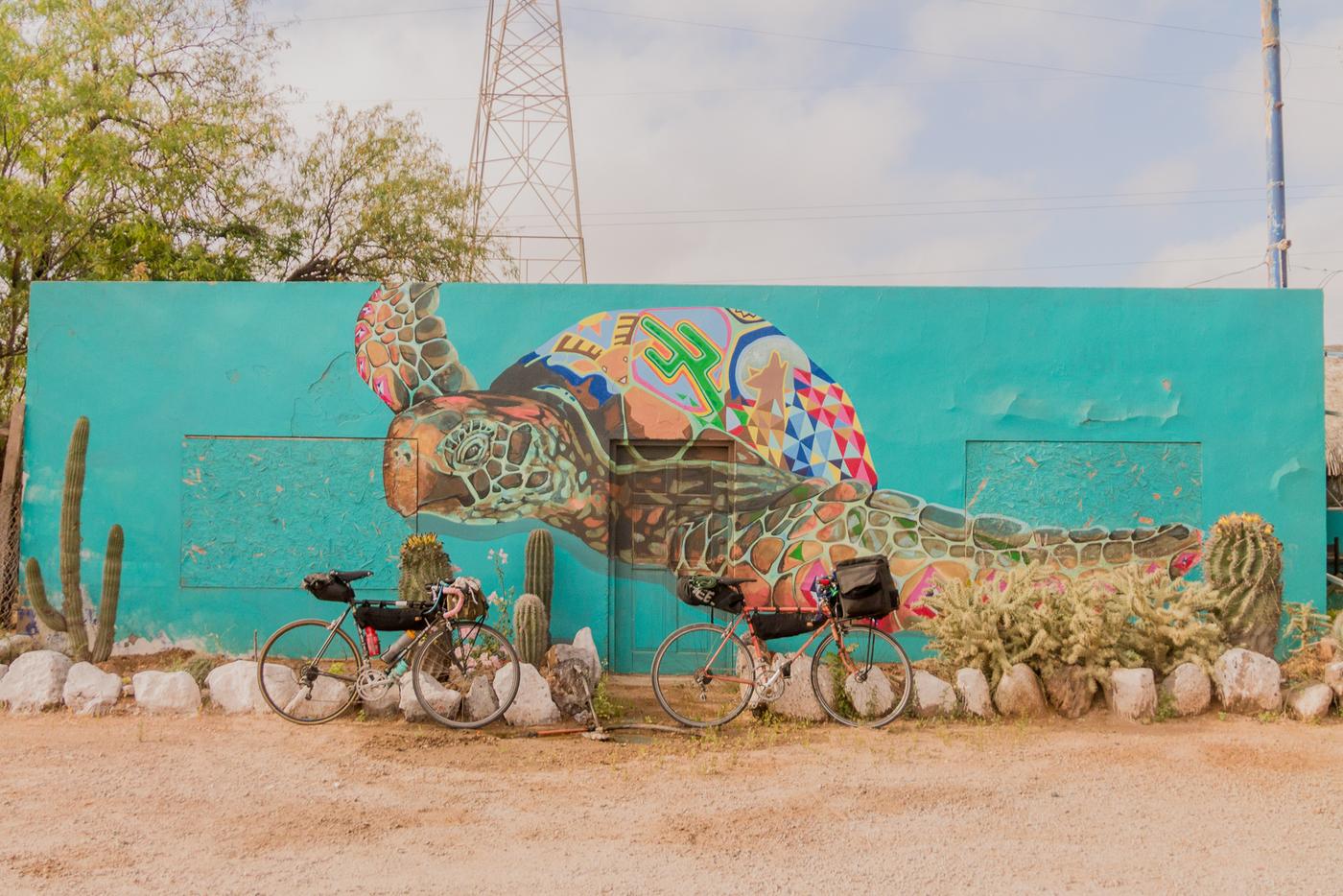 At 4 am we pack our bikes and ride through a still asleep city of Guaymas; soon we’re back on the highway, which in recent years had a shoulder added to its entirety so that makes us feel safer than we did back in 2015. We stop at a tiny café guarded by a Chihuahua dog that happens to share the name of my own Chihuahua dog, but unlike mine, this one didn’t want to be petted by a stranger. We make some progress propelled by the rush of caffeine but it doesn’t last too long, as headwinds get stronger than they were yesterday. For several hours we ride head down-earbuds on, taking turns to hide behind each other from the wind through a flat landscape that seems to be repeating itself endlessly, my eyes blinded by the whiteness of the concrete we ride on. At noon we reach the town of Vícam, one of the main Yaqui/Yoeme Nation towns, where we take a break from the sun for a couple of hours before pedaling on. The landscape gets progressively greener and arroyos appear here and there, indicating we’re closer to Ciudad Obregón, our goal for the day. Obregón is one of the main agricultural centers of Sonora and is also the place where Javo was born and lived till he went to Hermosillo for college. Here he plans to spend a few days arranging things before wandering further south, so it’s the place where I’ll take a bus back home as I’m not looking forward to riding the same road again. After 300 km in two days on my road bike, my hands are trashed, although the rest of my body feels good so I allow myself to take pride in that. A part of me wants to continue south, but I still got stuff to do back home and I know our paths will rejoin for an adventure somewhere else later in the year. Farewell my friend, see you down the road!

UPDATE: as I’m typing this story I get a message from Javo: it’s a photo showing a small crack on the fork crown. He doesn’t know if it was like that before the trip or if it happened during the 800 km he has done so far, and came across it as he turned the bike upside down to fix a flat. After pondering his situation, he has decided to ride it like that till Guadalajara, where he’s planning to work as a bike messenger and get another bike before continuing his trip.