We Went to Say Goodbye to the Summer-1

After spending a long, confusing summer mostly indoors because of you-know-what, my partner Karla and I were itching to ride somewhere and sleep outside. We decided to use the Swift Campout global call as an excuse for setting up a date and we made an open invitation for the local community to join as some of our friends had expressed interest in camping by bike. I had never organized a group ride, I’m not very fond of them myself, but I thought that minimal organization could make for a memorable experience while still keeping it self-supported.

The route would consist of a 130 km (80 miles) loop surrounding the outskirts of our hometown Hermosillo, a route I had put together over the summer as we were exploring dirt roads on our Saturday rides. One segment, in particular, called my attention because the city was covered by a hill and the road was overgrown which gave it a feel of remoteness, and there was a locked fence that cyclists are allowed to go through but not cars. I went to the ranch that the road belongs to, explained that I wanted to bring a handful of people to camp there, and got the permission way easier than I expected to. The route would also have several bailout options, in case someone decided to make a shorter version for whatever reason. I must admit I was very proud of my route and I was excited to ride it with other people. So we announced the event, emphasizing that it would be a fully unsupported ride based on mutual aid, respect, and leave no trace principles. As people started showing interest, most of them reported to have bikes but not a way to carry their stuff, so I put to use the pile of racks and bags I have hoarded over the years. The days that followed went by assisting people on the logistics of being self-sufficient, particularly in the water department as temperatures for the weekend were expected to reach 42 C (108 F) and our camp spot wouldn’t have any kind of services.

For my own setup, I decided to aim for the lightest packing I’ve ever had by leaving behind all the camping stuff I usually carry, mostly because the idea of spending a hot summer night inside a tent sounded hideous, so all I packed was a bed sheet and clean undies. For this occasion I brought back to life my 2000 Univega Alpina, which had been unused since 2018; I discovered a new kind of happiness when I found out that the frame bag of my Ron’s bike fits almost perfectly into this one. 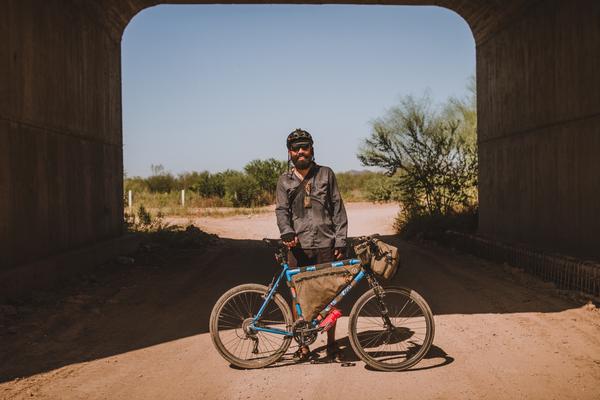 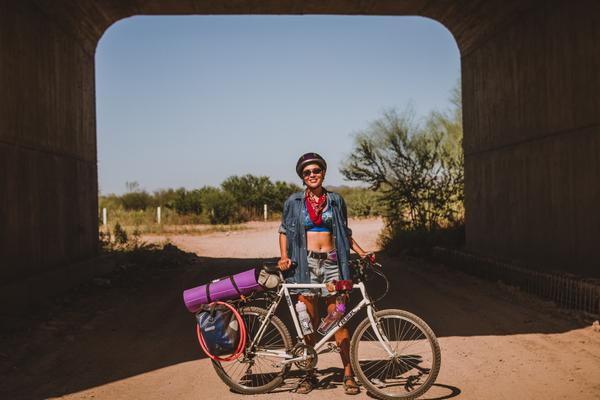 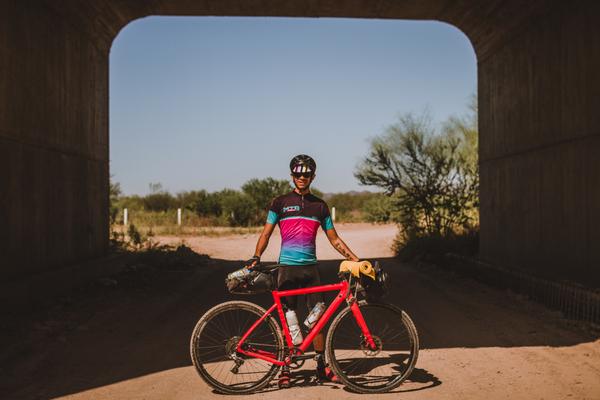 The date finally arrives and three friends report having flats even before the ride starts, so we wait for them. At last, eight humans and one dog assemble and I find out that nobody downloaded the route, which I was kind of expecting. But we have a dog in our crew, how cool is that?! A wide variety of bikes, from full sus, old MTBs, a vintage road bike, two-plus bikes, and even a flashy carbon gravel bike, all ride together at sunrise towards our first destination, San Pedro, where we stop for tamales and coffee.

We make our way through a labyrinth of dirt roads while the temperature rises by the minute. A bit before noon we make it to the dusty town of Mesa del Seri where we had arranged a meal with a local woman, who seems very excited to be feeding a bunch of sweaty cyclists. We spend the hottest hours of the day eating vegan ceviche, nopales with chile colorado and horchata, and napping under the mezquites in the public plaza, then at 3 pm it’s go time again. Another dirt road brings us back into the city; we fill up on water for the last time and regroup to get in and out of a dodgy neighborhood. As we ride we see three cholos in the median of the street setting up a white cross while drinking beers and blasting trap on a speaker, seemingly paying their respects to someone. Our tires hit dirt again for the last stretch of the day, and my favorite part of the whole route. As we are jumping the fence, we are joined by a group of mountain bikers who knew about the event but had other responsibilities, so all of a sudden we’re twice in numbers. We find a spot with nice wind flow and make camp for the night, agreeing on a 4 am start to win some time before the sun comes out. The alarm sounds and I wake up covered in sweat, but I slept better than I thought I would; it felt good to sleep outside again after all this time. We have breakfast and then the group of mountain bikers turns around and leaves; some go back home, and some others have to go to work.

The rest of us continue and we reach the only noticeable hill on the route: a steep, rocky descent that catches three riders by surprise making them fall down. We make sure nobody has more than a few scratches and move on with the sun already weighing on our backs. After an hour of negotiating sand, I start to feel that it might not be the best idea to spend another whole day under the heat, as the next section takes us further out of the city before bringing us back again. Karla and I talk to the group and we all agree to take a shortcut, saving us 30 km of riding under the scorching sun. We reach a store where we drink a bunch of water and sodas and take a garden hose shower then we push for the last 15 km, making it back to town just before noon. The following two days Karla and I feel weak and diarrheic and few others report being in similar condition, clear signs of heat exhaustion, but everyone expresses feeling proud and happy of what they did; some had never done 60 km in a day, let alone with extra weight on their bikes. Although this wasn’t the most scenic ride I’ve done and the weather conditions weren’t ideal, it was nice to finally get out and ride and camp with cool people who are already asking when the next bike-camp is gonna happen.