I had been holding back on these notes for about a year now because I felt that calling it a “review” sounded like too much. The audience here is used to deep comprehension reviews and it’s very intimidating to put it in the same category when my experience with bicycles is reduced to the five I’ve owned in my adult life, this one included. So instead this is more of a short story about a bicycle, with hints of technical information where it feels required.

In 2018 I was on a bike tour from Arizona, USA to my hometown in Sonora, México, on a bike I had used and transformed over the years, and after swapping the old suspension fork for a Surly one I thought I was very close to my dream bike, realistically speaking. Because sure those bikes with chubby tires I saw on the internetz were eye appealing, but this 2000’s 26’’ alu mtb frame with a bunch of mounts on the fork was pretty okay. On the way I came across a group of cyclists with whom I arranged to make an overnighter on the Mexican side of the border, and Ronnie Romance was among them. At night, over the fire, they were asking me a bunch of questions which I thought to be natural due to being “the new guy”; I didn’t know this was some kind of job interview. Some weeks later, as I find myself on the verge of falling into the fallacy of a stable job in favor of a financially safe future, I get a message from Ron. He says he’s been working on a bike of his own design and asks if I’d be interested in riding it; I had seen it online before, the one with the funky angled fork. And that was it, I said yes to putting all my time and resources to riding that bike and probably ruining my future in the process, which isn’t looking too promising for my generation anyways. Fast forward a few months and I received the bike, at the time named only after a rose emoji, which inspired me to name mine “Rosita”. As I was putting it together I found out the derailleur hanger was missing, so I was left with a brand new, almost fully assembled bike that I couldn’t use. While I impatiently waited for the hanger to come, I’d walk the bike up a hill and coast down just to get the feel of it; since then I’ve hardly ridden any other bike and it has been my home for a good chunk of the last two years. It has spent most of its time dressed up in bags and seeing the bare frame is a rare sight for me, to the point I had forgotten it had that nasty looking tape to prevent the velcros rubbing on the new paint cuz that shit was expensive. So what makes this bike special? First, the fork. Ron applied the knowledge of his days as a fishing guide and thought that a longer wheelbase would make it easier to float over loose dirt and obstacles, just like a boat over waves. Some of you might remember the version he has of this bike includes a fat tire up front to further its floating capabilities. Second, this bike is built around having the biggest frame bag possible for its size. On my medium frame I’m able to fit the tent poles, two 3 L water bladders, an 8 oz bottle of sealant, and fill the remaining holes with nut bars; everything goes inside an Andrew The Maker bag that has developed a big sweat stain on the center. There are three mounts on the downtube and I added a second bottle cage with hose clamps because there’s enough space for it. Three mounts on either side of the fork are occupied by a pair of Outer Shell’s Picco Panniers, where I keep my bread and avocados from getting squashed, and the seat stays have mounts for a Nitto mini rack where my maxed out Fabio’s Chest sits comfortably. Wearing a set of Roval Traverse Carbon 27.5+ wheels kept in place by thru-axles, when paired with 3-inch tires there’s barely any clearance left which makes me a sunny weather tourer; throw in a Zefal HPX frame pump for some extra #tukt points. The first version of this bike was with flat bars but those hurt my hands so now a 675 mm Crust Towel Rack offers more hand positions, located up and comfy because most of my riding is done on the drops. TRP levers pulling on TRP Spyre brakes and a 12-speed Microshift bar-end shifter that broke on a fall, so with a little help from my friends at Transit Cycles in Tucson it now sits securely inside the drops, thanks to a Paul Thumbies and some shims; since then I’ve fallen again and the shifter remains untouched. 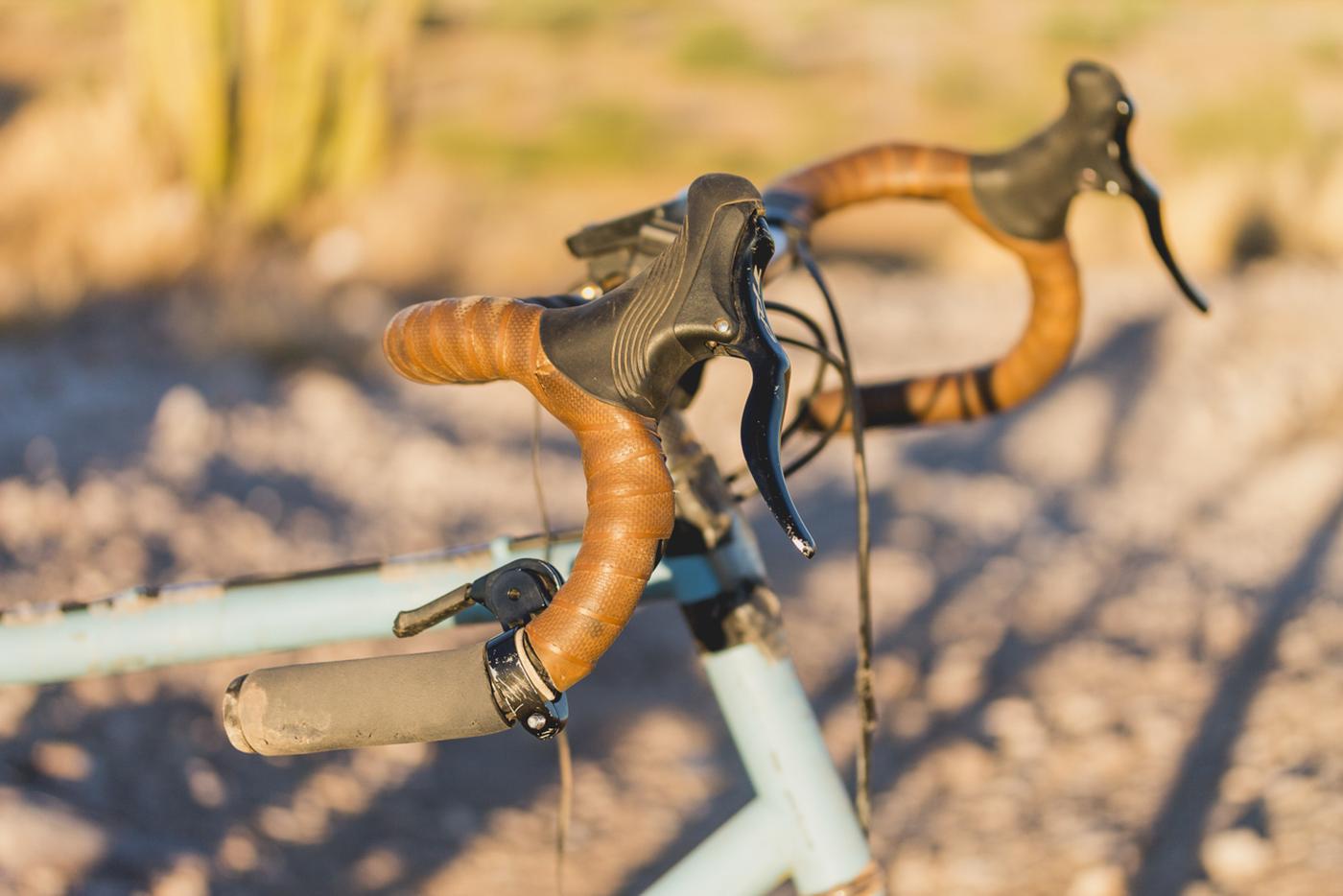 When I first rode it the handling took me by surprise. With its 65-degree head tube angle and a 108 mm trail, the steering is super sensitive at first then it feels nice and stable as I catch some speed. The wheelbase is 1194 mm, with the front wheel so forward that I can see it even with a fully loaded Fabio’s on the bars, pretty handy when going down a sketchy line. For very steep climbs I learned to lean on the bars while remaining seated, otherwise, I get scary unwanted wheelies or loose rear traction. Tight turns must be done with care to prevent hitting the bars with my knees, but toe overlap is nonexistent in this bike’s universe. Now, where this bike excels is dirt roads. Sometimes on singletrack, I’m kinda wishing for a wide flat bar, especially when holding on for dear life to the brake levers, and when on pavement I’m thinking of a narrower, less knobby tire. But when I’m on a long stretch of dirt, which is where most of my riding happens, I feel like Goku on his Flying Nimbus, just cruising along on any loose dirt or rocks it finds. It has allowed me to explore roads and places that would otherwise be harder, even risky, on my previous touring rig, and there would definitely be more walking included, which I find a very boring activity. After carrying me safely through Utah, Arizona, Sonora, the length of the Baja Divide, and many more rides, I can confidently tell that we have many more adventures coming our way, and who has time to think about retirement when you get to ride an awesome, beautiful bicycle for days on; genuinely a dream come true.