The time for it finally comes and a ferry takes us from our home state Sonora to Santa Rosalía in Baja California Sur, a small city with European village-style buildings and famous sweet bread. Locals say that if you eat said bread then you will return to Rosalía: it only took me 4 years after my first Baja California bike trip. But before embracing the proper Baja Divide route we decide to do a little warm-up ride, still on dirt roads but with a lot less climbing. A friend had invited us to visit her in a tiny island which is 20 minutes by boat from the very edge of that shark fin-shaped corner on the west of the peninsula, so we mapped a route to get there all of it contained within the Vizcaino Natural Reserve, one of the biggest in México. 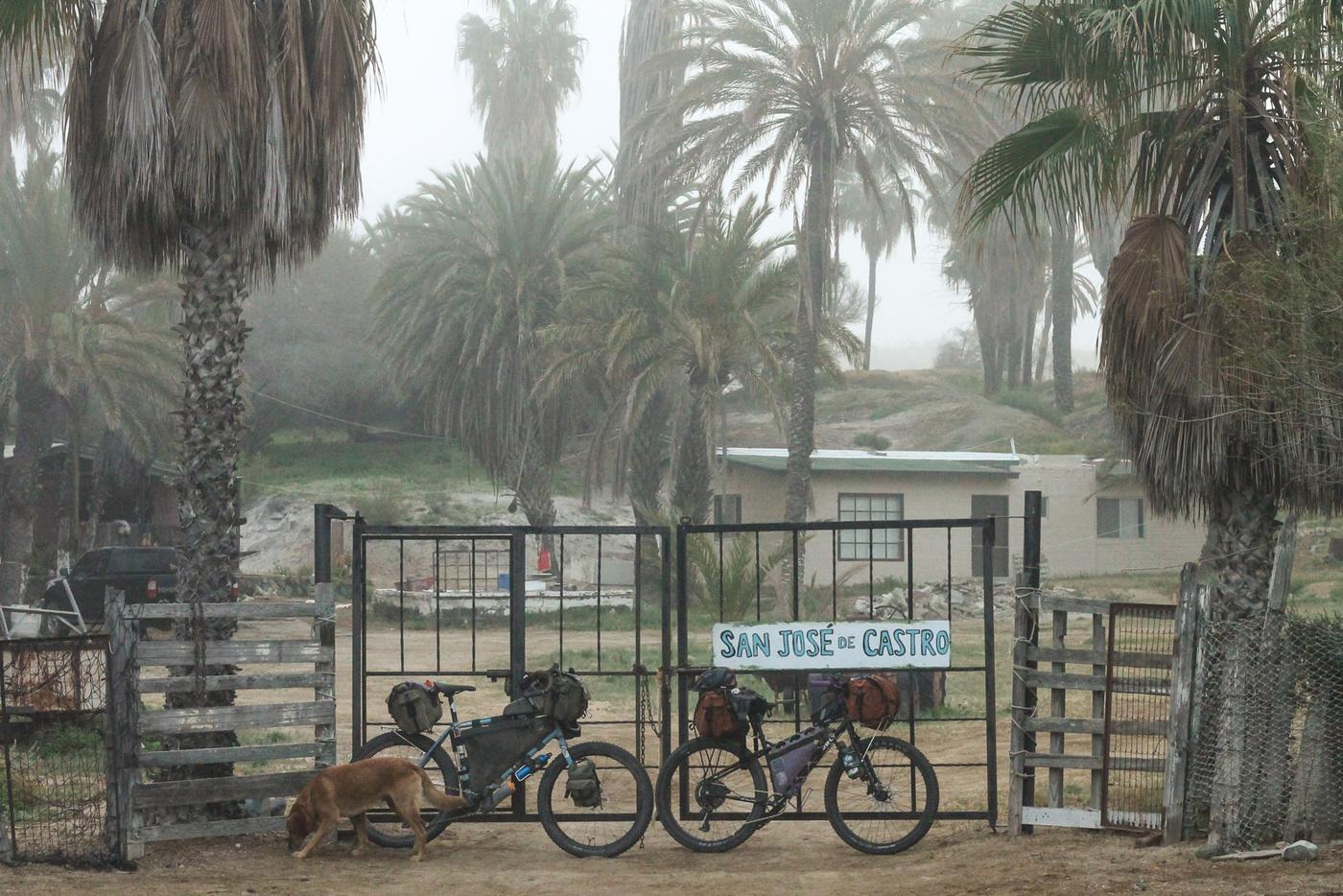 After a couple of days on a paved highway, we make it to Punta Abreojos where a local mountain biker offers his house for us to stay and shares stories of his rides on the trails in the mountains visible from our last night’s campsite. It is said that there’s a buried Misión hiding somewhere and that there have been cases of people going up those mountains who come back out unable to speak. After Abreojos we ride for two days on corrugation and headwinds till Bahía Asunción, and on the way, we come across several spots with stuffed animals hanging from poles, a sight that raises questions.

In Bahía Asunción we find out that Karla’s cassette is loose but we don’t have the proper tools for tightening it, so we resignedly decide to continue hoping it’ll hold till the bike shop in Vizcaino, which is still a few days away. Then a local man greets us and says he has tools so we follow him to his place, and as he tells us about the local talented riders who have made it into national competitions he puts the cassette back in place, taking one preoccupation out of our minds. We thank our road angel Don Chayo and continue towards a small mountain range where the road quality improves along with the landscape. Just before sunset, we make it to a little unexpected ranch where a lovely couple offers us a camping spot and as many beans, cheese and tortillas as our bellies can take. The following morning we wake up to a fog that covers us for a couple of hours. A low trafficked paved road takes us to the sand-covered town of Bahía Tortugas where again we see stuffed animals in houses’ gates; we ride over a little pass to make it to Punta Eugenia, the very tip of the shark fin. Here we jump on a small fishing boat, a “panga”, that delivers us to our long-awaited objective Isla Natividad where our friend Ana, who is the local doctor, is waiting for us.

Natividad is a fishing town dedicated to lobster and abalone production and where cross country bike races have taken place. Resources come every 15 days on an amphibious boat and all electricity is shut down at 11 pm, to both save on gas and respect the Black-vented shearwater, a protected bird native to the island called “Nocturno” by the locals due to its habits. Come night, the Nocturnos come out of their little ground caves and make an eerie sound which might cause an unsettling sleep if you aren’t told what it is beforehand. They will also get blinded and crash against any light they see, so having lights on at night is discouraged. 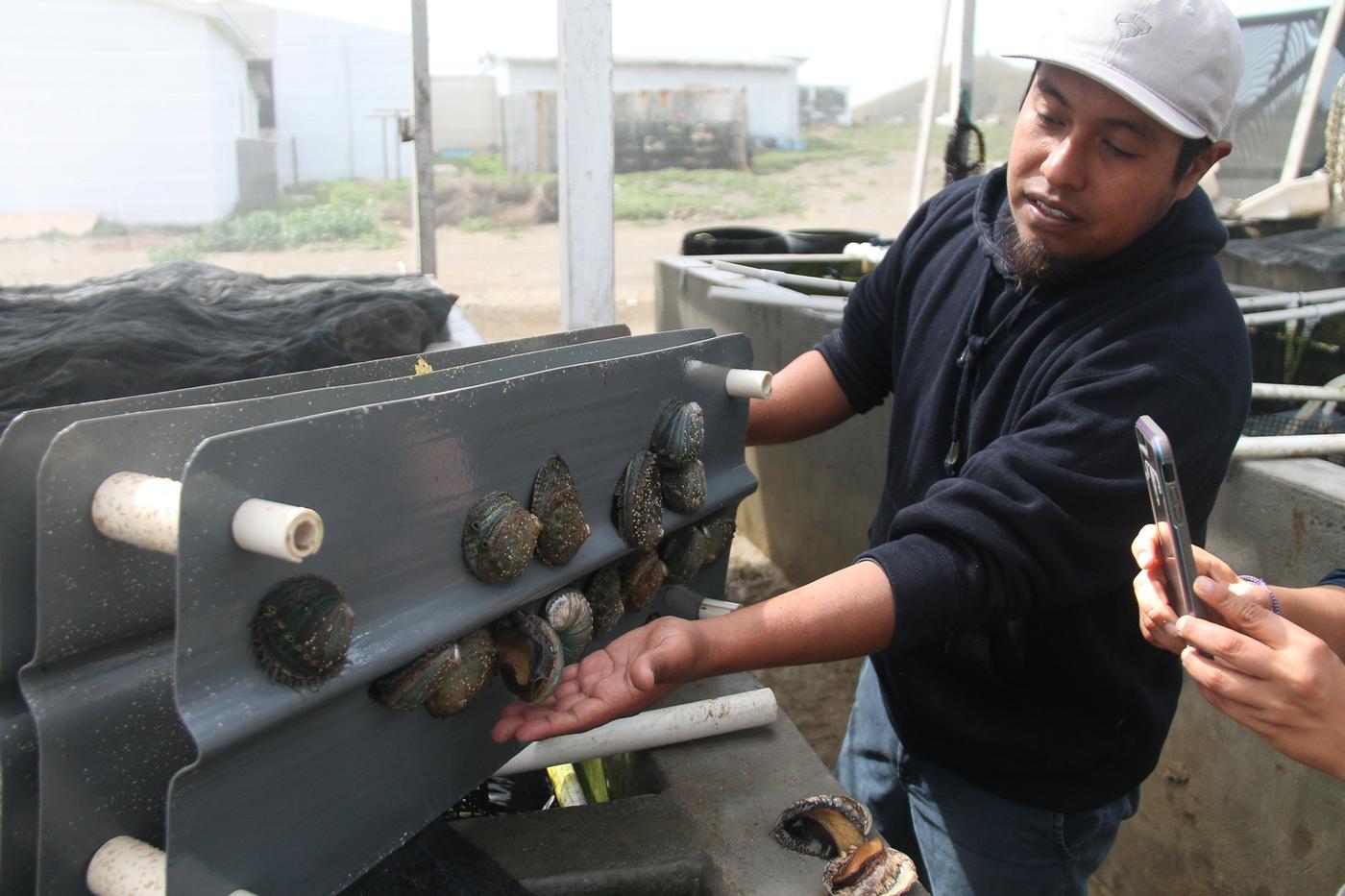 Arriving at Ana’s place we realize the house before hers has three stuffed animals piled up on the porch, so we finally ask her what this means. Ana tells us this is what people do when they believe there’s a presence from the spirit world, a little tribute to calm down any wandering soul hanging about. She tells that one night it was past the electricity shut down and she asked the neighboring kids to accompany her to her house, so they walked together but as they approached the house with the stuffed animals they stopped and told her they would wait and see her go into her house but weren’t going to get any closer.

The days on the island go by as we visit the abalone farm, ride the car-free roads and watch dolphins and sea lions, till it’s finally time for us to leave this idyllic place and go back to the real world in mainland Baja California. We are welcomed by strong headwinds that push us out of the road and complicate what we thought would be a relatively easy ride back to San Ignacio, where our long-awaited Baja Divide ride will resume. After a 500 km warm-up, we feel like we won’t suffer as much on the upcoming segment, which has and infamous stretch said to be one of the most strenuous of the whole route. Ruta de las Misiones, here we come!