Last fall I was invited out to Scullbinder ranch near Mancos, CO, for a triall run of one of the many trips Steve “Doom” Fassbinder and Lizzy Scully will be offering through their new guide service, Four Corners Guides. The trip I was to sample was a 4-day bikepacking tour of the Ute Mountain Tribal Park, which is literally a stone’s throw from their cabin’s door. Due to scheduling conflicts, I was only able to join for the first two evenings of the trip. Having not spent much time in this corner of Colorado and neither having visited Mesa Verde, I had never seen or visited any Ancestral Puebloan dwellings, I was quite excited, to say the least. 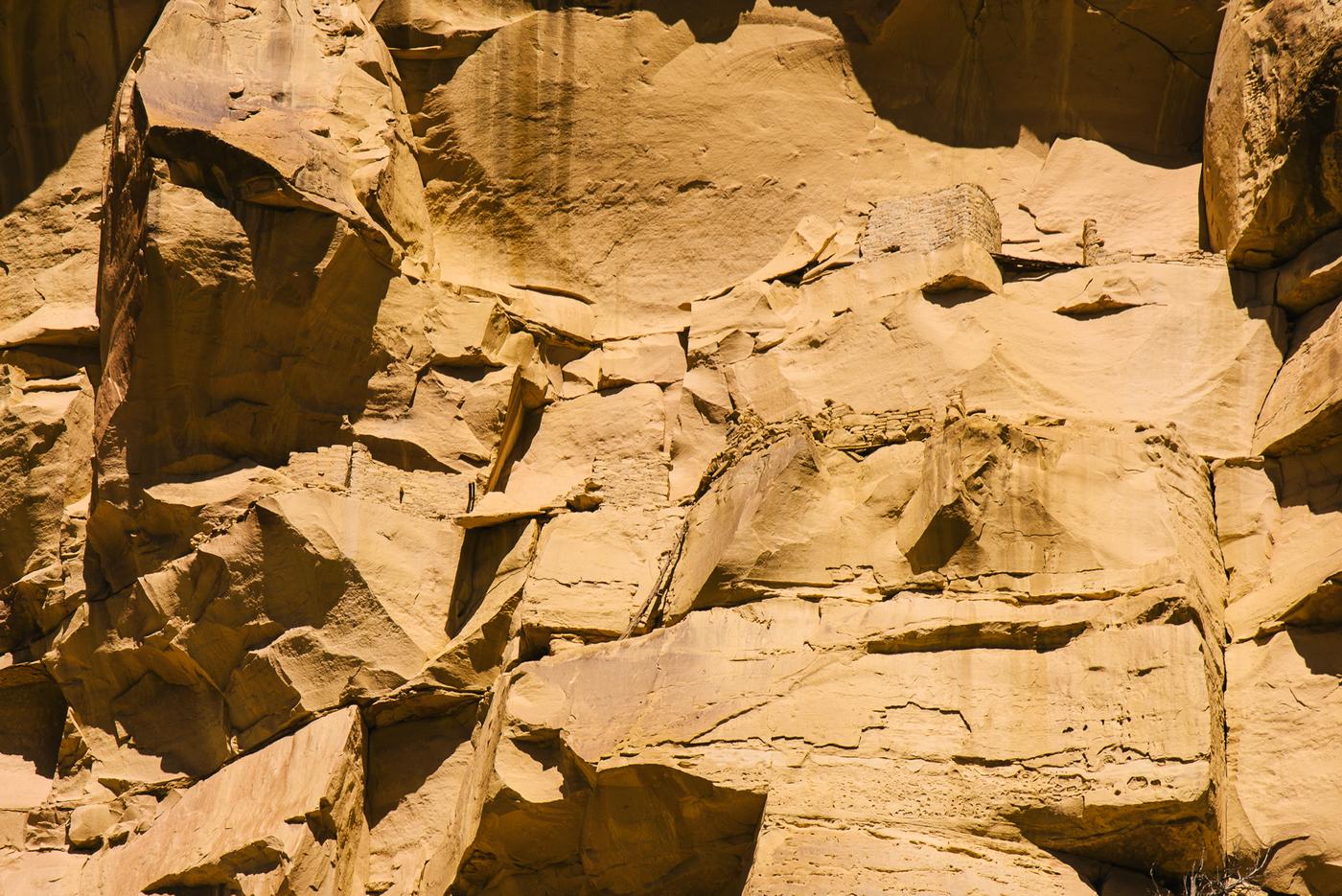 During this article, we will not use the word Anasazi except where quoted, “the term “Anaasázi” is a Navajo term (and spelling) variously translated as “ancient ones,” “ancient enemy,” “old enemies,” or “enemy ancestors.” Because the term is considered impolite, even insulting, by many contemporary Pueblo Indians, the appellation “Ancestral Pueblo” is now considered the more acceptable term. (1)”

Before I get into the trip I wanted to take a moment to talk about some history of the region and its people and how the common theme of Native dispossession leads us to the park today. “Ancestral Pueblo Indians – also known as the Anasazi – inhabited the southwestern portion of Colorado for more than a millennium, beginning sometime before A.D. 1 and continuing until about A.D. 1280. The population of the northern San Juan region had peaked sometime during the early or middle A.D. 1200s at an estimated 20,000 residents, many of whom, in the mid-thirteenth century, had aggregated in large, walled villages constructed around canyon-head springs or in the well- known cliff alcoves in what would become Mesa Verde National Park. The villages built in the 13th century were dictated by defensive, not aesthetic, motives. Famine, drought, the overhunting of big game, deforestation, and perhaps spiritual crises had turned the Anasazi world into a nightmare landscape of survival. Eagle Nest House may have been a last-ditch refuge against other Anasazi who themselves were starving and who might come at any time to raid and kill.(1)”  These conditions led to the amazingly perched dwellings that have made the area famous for hundreds of years.  Jumping ahead a few centuries, the area was inhabited by the Ute tribe. When Westerners started arriving in the area, “An 1868 treaty established a Ute reservation covering most of the western half of Colorado. Successive treaties whittled the reservation smaller and smaller, as such towns as Durango, Cortez, Silverton, Rico, and Dolores sprang up. (1)” In 1906, the formation of Mesa Verde National Park, “Cut another chunk out of the Ute Reservation, but its architects made a slight blunder. The southern border they drew cut an arbitrary line through the Anasazi heartland, a culturally unified region comprising the densest and richest aggregation of 13th-century cliff dwellings in the country. The border left Eagle Nest House and scores of other ruins on Ute land outside of the national park. (2)” Despite efforts to force the Ute to relinquish the land, the government failed and in the 1960s Chief Jack Horse had the idea to create the Ute Mountain Tribal Park as a means to allow visitors to enjoy the area. 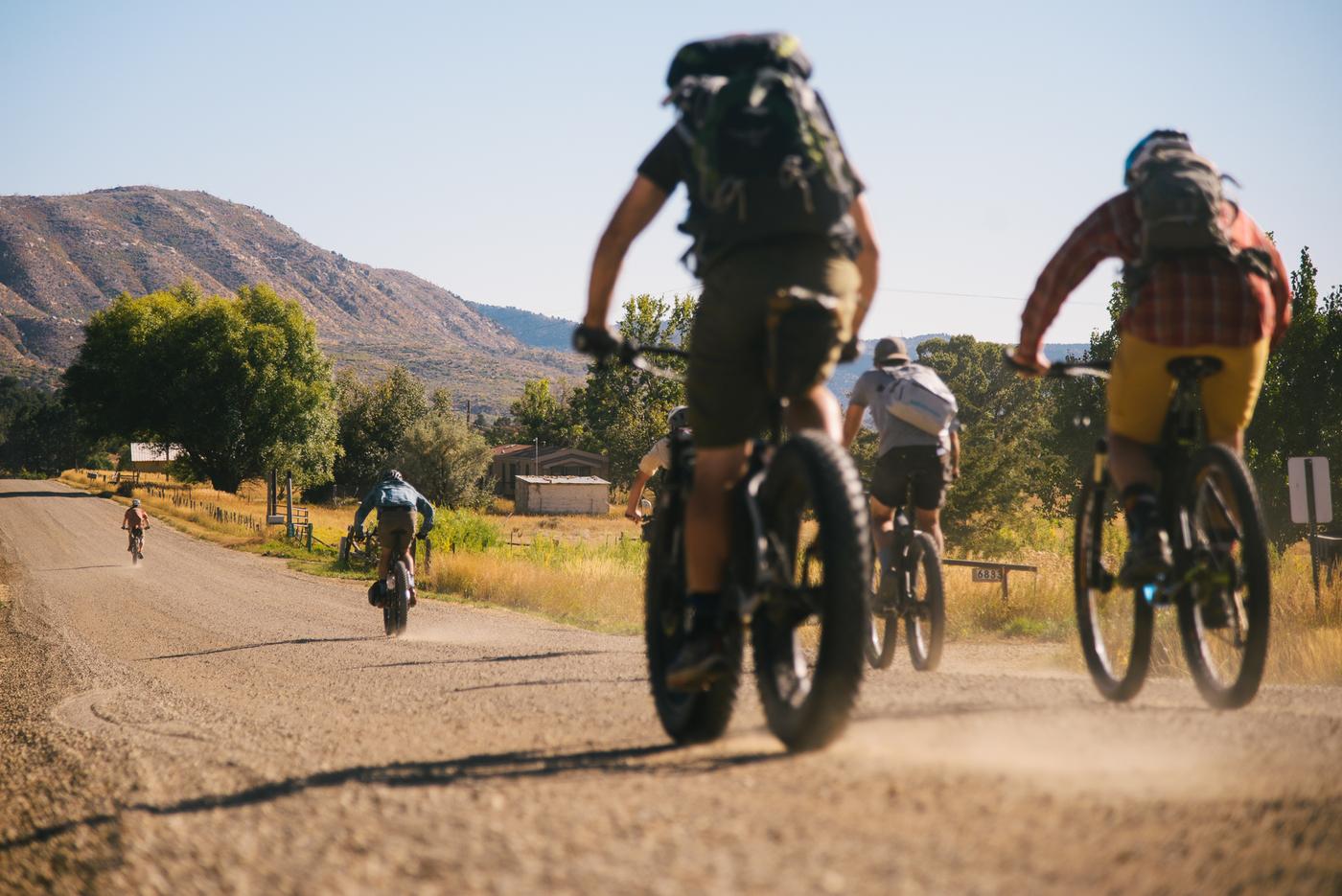 Ok, back to the trip, our posse parked all our vehicles at Steve’s house in the thriving metropolis of downtown Mancos, CO. Our team was assembled of various friends of the guides’ and ranged from seasoned bikepackers to Steve’s Uncle-in-law, Dusty, who was just borrowing a bike and buncha bags from Steve. Dusty was the best, I hope I get to be dusty when I grow up. We rolled south out of town until the road turned to dirt and the sunset made the dust glow something special. We got a brief tour of the single-track system they had started to cut into the hill on the property. We joked that this whole trip was just to wear-in the new trails a bit more. A rock drop and few squirrelly creek crossings rounded out a short but hair-raising trip down to the cabin.

We arrived at the Ranch to find Jesse and Ren stoking the fire and preparing dinner for the evening. An ice chest full of beers cleansed our palates as we awaited our dinner. I poked around the small cabin that Steve had embellished around the shed that adorned the property when they purchased it. It had all the fixings of a dream cabin with a few special touches, my favorite being the water jet offcuts from rock climbing nut tools being used to protect the windows. The back patio overhangs the Mancos River, which flows right through their property. Being prepared over a wood fire, our dinner was artfully crafted, and I can honestly say it was the best meal I’ve had in YEARS. Jesse and Ren truly crafted a culinary masterpiece on a campfire nonetheless. Just when you think it couldn’t get better, they offered up cookie s’mores, to which everyone but myself was reluctant to cook up, that is until they all smelled my delicious marshmallow roasting over the fire, hungry minds are so easily swayed. I retreated to my glamping tent down by the river for an early evening. I was fighting off the tail end of a cold that hit me earlier in the week on a packrafting trip on the Navajo Nation (more on that soon). 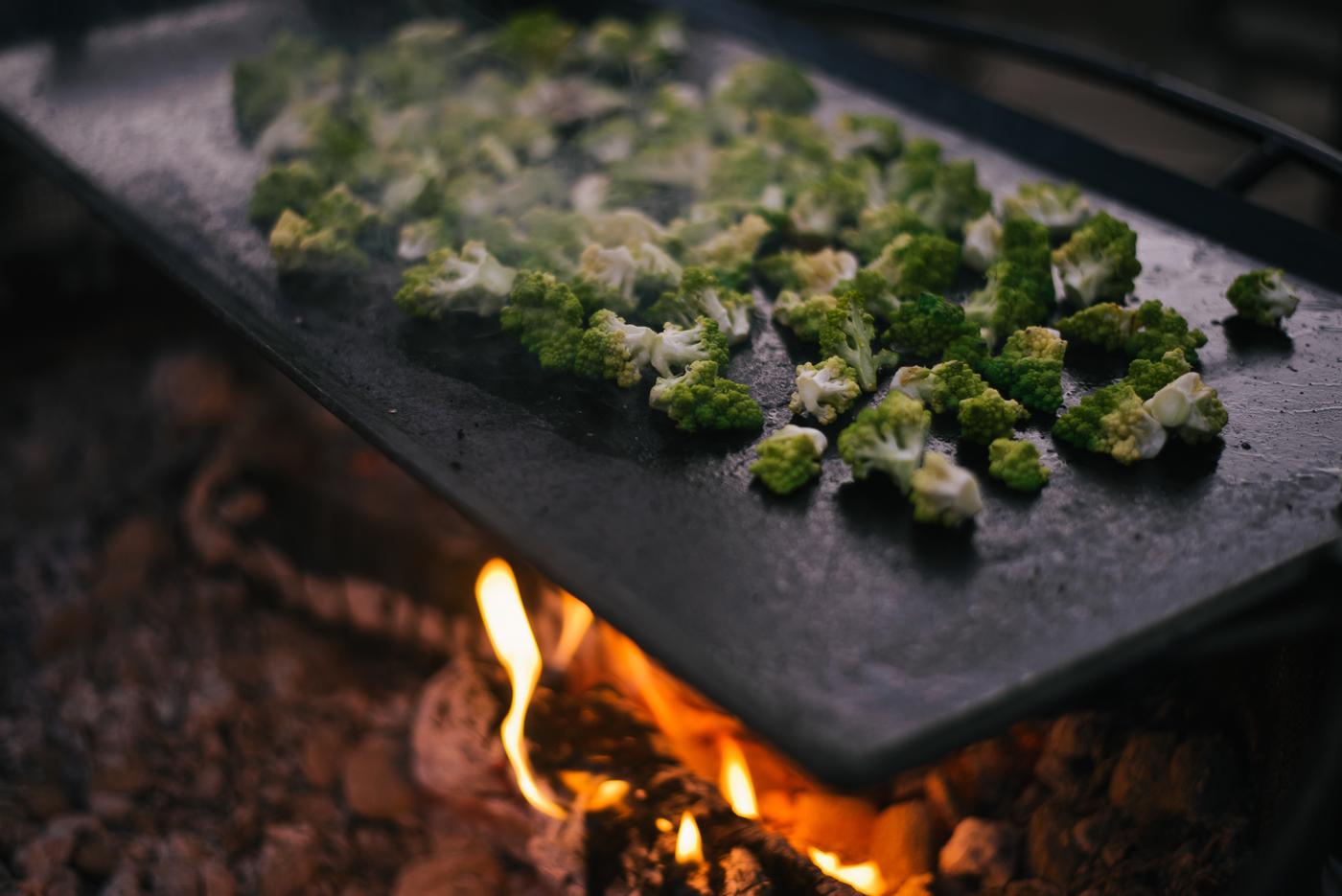 We awoke in the morning to freezing temps in the river valley, I found everyone huddled around a small space heater in the main cabin. After receiving our plentiful rations for the trip we all packed up our bikes to head out into the Tribal Park. Dusty made sure we had some candy in our bellies before we left the ranch. Thanks Dusty. Not more than a tenth of a mile down the road we encountered the edge of the Tribal Park boundary. We had special clearance to enter here, most tours would have to go through the main entrance. All the Brittlebush, Cottonwood, and Aspen were in full fall color season and vibrantly adorned our 10-mile cruise to camp for the evening. We dropped our gear around the old corral and grabbed what we need for our afternoon hike.

About a mile down the road we meet our guide, who went simply by Wolf, who would be showing us up to an Ancestral Puebloan dwelling. He was a member of the Mountain Ute tribe and works as a cultural guide in the park. We started our hike up the steep canyon scree slopes and almost instantly began to see pottery shards every few steps. They have been washed from the upper slopes down the canyon over the years. We are warned to not disturb or move any part shards, our guide speaks of bad luck coming to those who loot and disturb such things, obviously, some have been moved to be so close to our path, but I’m not risking it. I start to make out faint shapes far higher than I can imagine a cliff dwelling to be, but as we get higher and higher my spotting is confirmed. A hundred feet above our heads is a small network of walkways connects a few dwellings. Our group has some very very accomplished rock climbers in the posse and we are at a loss to find a reasonable route up the cliffs. This kind of dwelling is suspected to be a defensive response, necessitated during a severe drought that made resources incredibly scarce in the region hundreds of years ago. 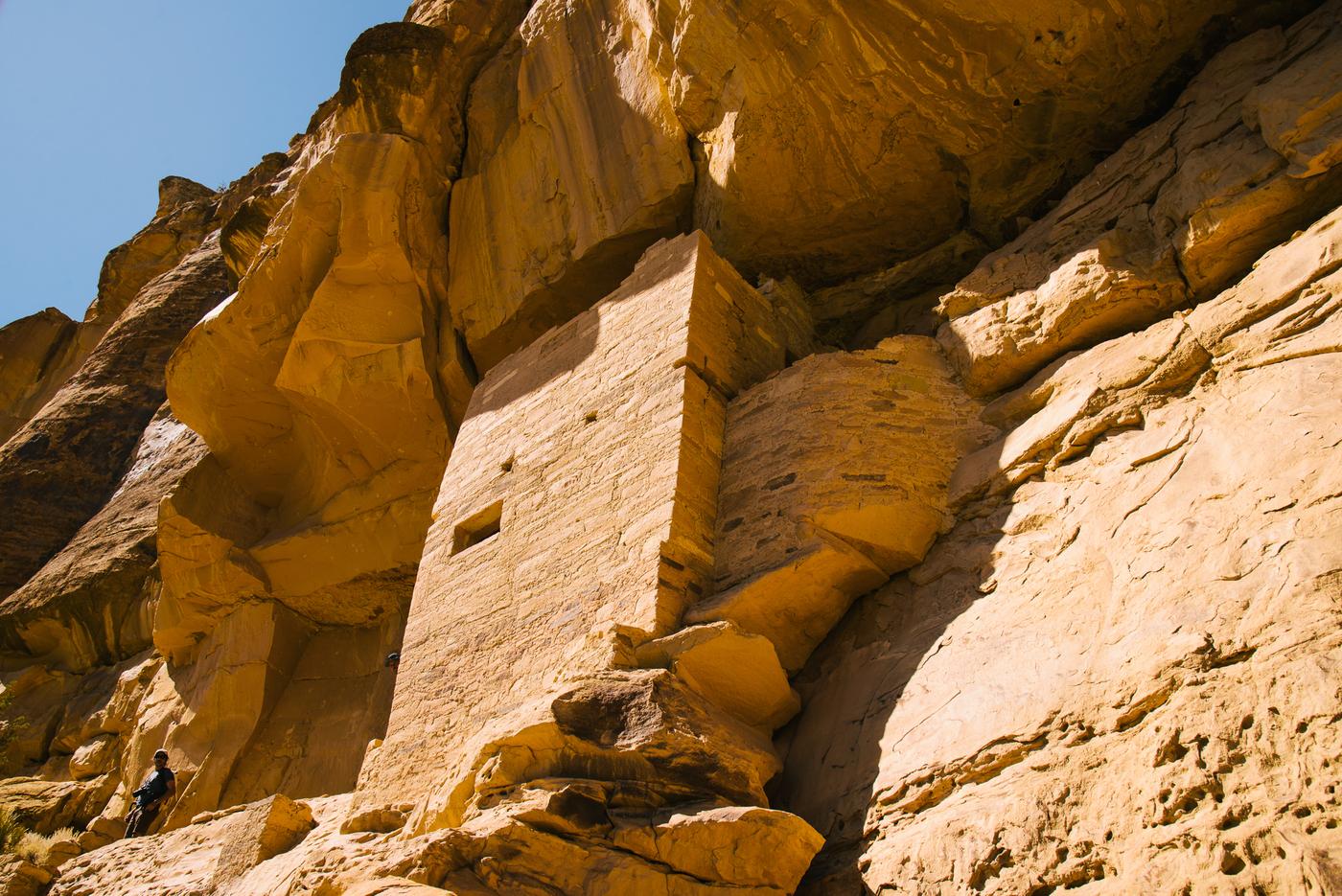 Soon our destination, a two-story dwelling, came into sight along the lower part of the cliffs. We were all astonished at how smooth and straight the exterior was for this type of construction. We were permitted to enter the dwelling and scramble around the remains of the structure. We quickly noticed many western names etched in the stone. This area has been heavily looted in the past and continues to experience damage from un-permitted visitors.  A few of us embark farther along the cliffs and find some Petroglyphs both cowboy and native alike. We scan the horizon and notice even more small structures built into the cliffs, it’s truly breathtaking.

Back at camp a few hours later we sip beers and enjoy a lazy afternoon after a quick creek dip. We point our cameras at the cliffs and then zoom in on the screen, and find more and more small dwellings up in the cliffs. Near camp, I spy an alcove in a large boulder that would be great to sleep under. As I approached the rock I find a massive spread of nearly 300 pot shards laid out across another large rock. I can’t believe how many pieces there are, and as I truck my gear back and forth from the corral I see many more underfoot. This area is literally littered with pot shards and artifacts. 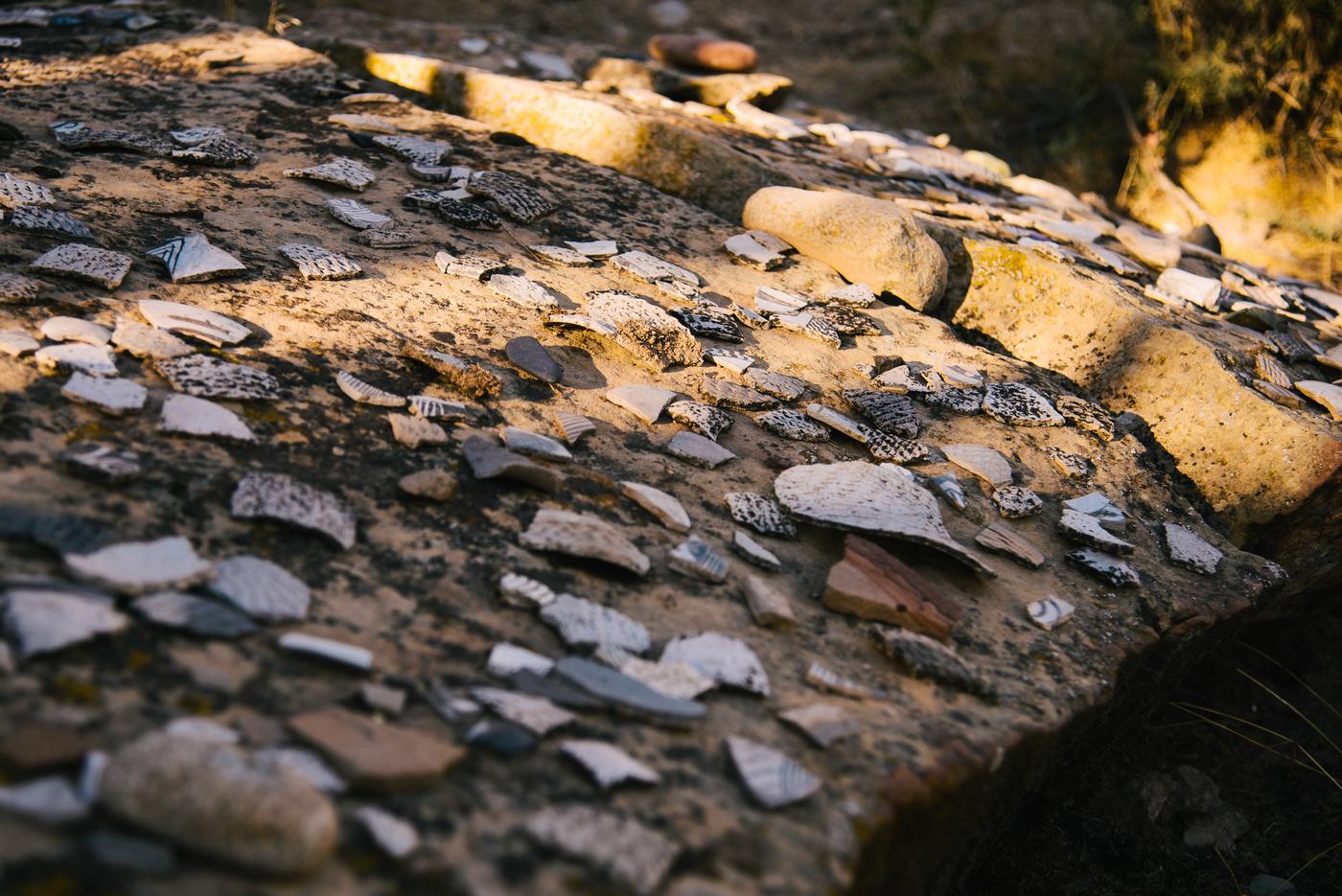 The next morning I have to turn around head back to the ranch while the rest of the group continues on for another tour of the incredible Eagle’s Nest dwelling which I’m told is absolutely amazing. I feel truly lucky to have been able to experience this place in the way I have the past two days. Most people either get shuttled on a massive bus into Mesa Verde NP or if they are lucky to get on a smaller tour through the Tribal Park. To have a personal guide for our hikes, and to be allowed to ride along the meandering Mancos River Valley on a bike is such a treat. We got to linger and spend as much time as we desired at the dwellings and spend our evening under the quiet of the stars and valley walls. As someone who used to work as a guide, I can truly say that what Steve and Lizzy have cooked up here is a truly unique experience in its scope and scenery, from their personal ranch to the exclusive access for bikepacking in the Ute Mountain Tribal Park.