When Giancarlo Brocci imagined what would become the now world famous L’Eroica vintage bicycle homage in 1997, he surely never thought that rubber would crunch on gravel all the way at the Southern tip of Africa, in honour of his humble concept. Giancarlo saw the first L’Eroica rides as a way to bring attention to, and thus encourage the preservation of, the beautiful ‘strade bianche’, or white marble gravel roads of the area around Gaiole in Tuscany. At the same time it was a way for him to honour and remind others of the perfect peak of the sport he loves so dearly – the heady, fiery days of Anquetil, Poulidor, Coppi, Bartali, Merckx… 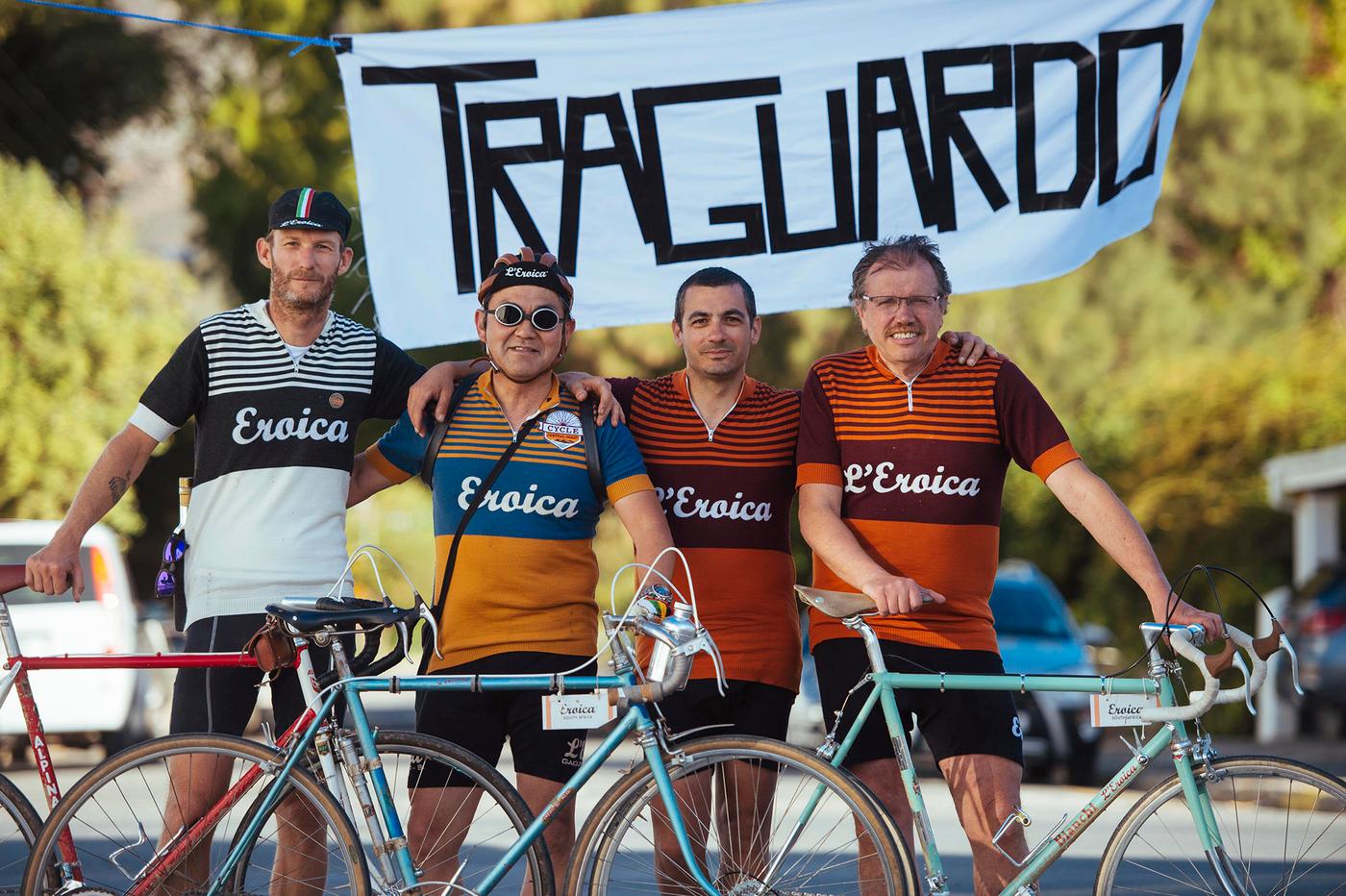 Nineteen years later Giancarlo’s dream has reached African shores. The poetry and drama of the Italian original has come to meet the harsh, wild and unpredictable African landscape. And what a match it is – Italy comes with a long and storied cycling history, steeped in tradition, and South Africa brings to it it’s fraught political past, and the mysterious and largely undocumented cycling lore that was born from it. Yes, South Africa had a racing scene, and even a frame building movement. A small but inspired one – a few eccentric and experimental builders, mostly self-taught, put together everything from larger volume factory frames to true custom once-offs for our local racing heroes. Because of sanctions against South Africa that prohibited the import of bicycles during the dark Apartheid years, a few industrious riders saw an opportunity to create steel racing frames locally, and for a few years they were household names in the cycling community at large. But the end of Apartheid coincided with the popularization of aluminium bicycles and mountain biking – suddenly aluminum mountain bikes were widely available, the flavour of the month. Carbon came next, and that was the death knell for our local steel frame builders. Alpina, Hansom, Cosmos, De’Lange, Gemini, Peter Allan, Du Toit. These were some of the classic and infamous South African-built frames that pulled up to the start line next to the more familiar Bianchis, Colnagos and Merckxs on 23 April 2016 at our very first Eroica South Africa. The historic town of Montagu, founded in 1851, known for its spectacular and ancient mountains and natural hot springs, will be the permanent home of Eroica South Africa from now on. And in true wild style, the local weather produced a storm on Friday afternoon that threatened to not only derail our inaugural Eroica, but permanently alter the landscape in the beautiful Montagu valley. But behold, the sun rose gloriously on Saturday morning while numbers were being pinned to jerseys and coffees were being clutched in early-wintery hands. It was going to be a spectacular day. Just over 150 riders took part this year, and regardless of our concerns about the local scarcity of older bikes and kit, everyone made a huge effort to look the part. There was great food, local wines, live music and we even had two official ‘team’ vehicles – and old VW bus and Mercedes station wagon emblazoned with the now-defunct South African bicycle brands Hanson, Le Turbo and Deale and Huth Cycles. We had a short 50km route, with a special breakfast and ‘water’ stop at the Kingna Brandy Distillery, and our tougher 90km route included some bigger climbs and an opportunity to have a swim in the remote Pietersfontein Dam. Uncharacteristically for an Eroica event, there was a portage section down the steep dam wall which added a bit more danger and excitement to the already challenging route. Along the 90km route, the roving Deale and Huth Cycles VW bus kept making a welcome appearance here and there with good wine, fresh bread, cheese and pesto. But the main player of the day was the almost all-gravel 140km route. Long and tough enough to make sure this was no family fun ride. With the monstrous Ouberg Pass within the first 25km from the start rising above civilization and carrying riders onto the vast plateau above, it was a sudden stark reminder that once you’re up there, you’re very remote. For the majority of the 140km route, riders will see no-one, only a vast and searing expanse of natural beauty. This is Africa. That doesn’t mean though that we left riders out there to their own devices – of course there was food and wine to fortify them for their return to Montagu down the picturesque Koo valley. Just before arriving back in town along a last stretch of tar, the 140km riders met the 90km riders as they came out of the all-gravel Baden area, for a sprint back to the Eroica Festival venue. It was along the 90km route that I had the privilege and pleasure to ride with Giancarlo and his dear old friend Luciano Berutti. Having the founder of L’Eroica attend our first event in South Africa was a very special honour, and with Luciano here too it was like touching the very soul of what Eroica is. Luciano is a force of nature. At 73, riding his 1907 Peugeot, he put many a younger rider to shame on the climbs in Baden. He would break into song at any given moment, bomb a singletrack without hesitation, drink wine straight from the bottle. He is what we should all aspire to as riders – he is at one with his machine, the environment, and he embraces the ‘beauty of fatigue’ that Giancarlo so fondly speaks of. I tip my cycling cap to these gents, and even thought we could hardly communicate since I don’t speak a word of Italian, we had a fantastic time. I look forward to welcoming them back to Eroica South Africa in 2017 – I’ll even gladly fix all their punctures again. Ha ha. 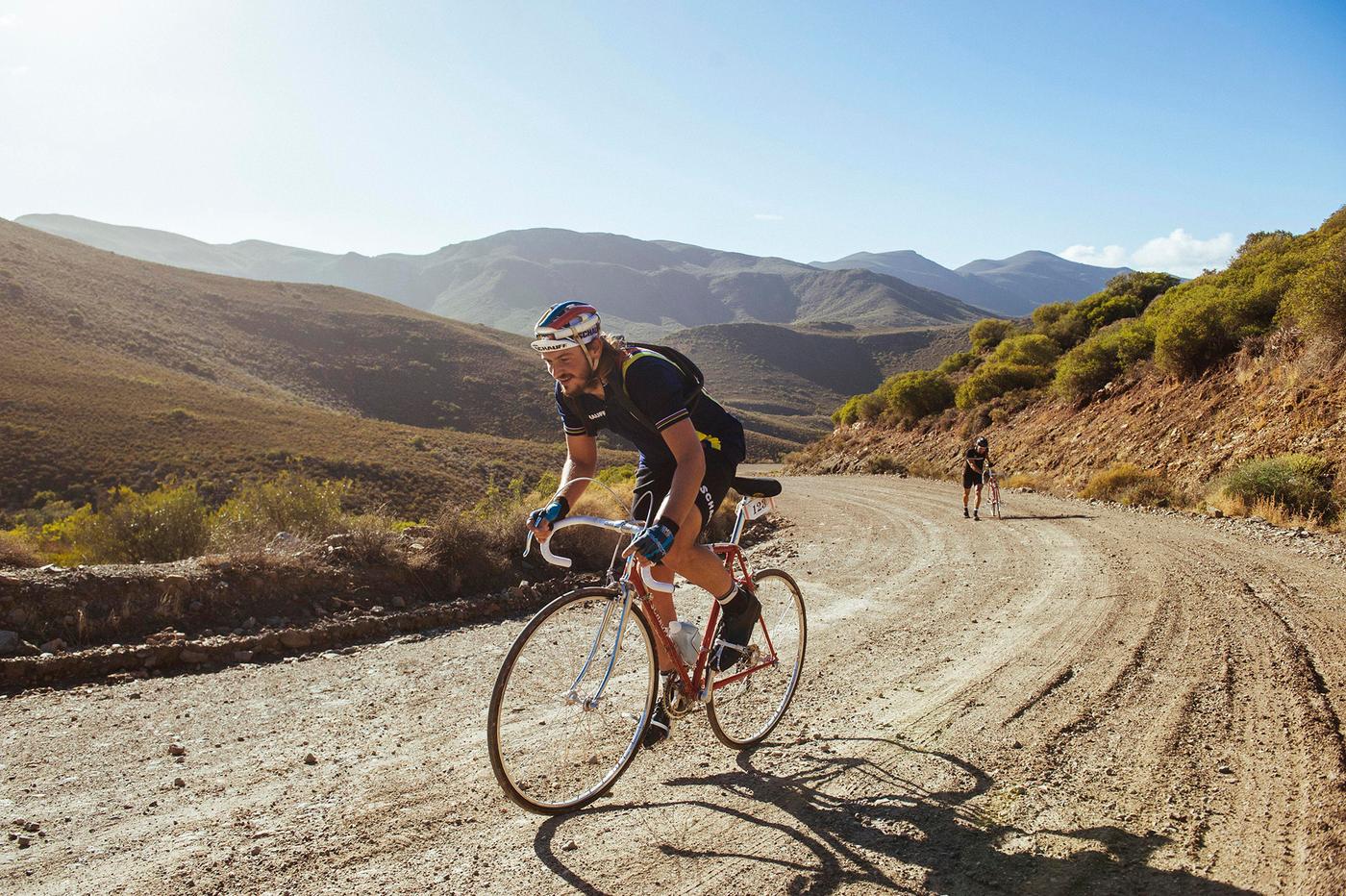 We also look forward to welcoming you, ladies and gentlemen of the gravel road, to Montagu in the beautiful Cape Province of South Africa, where the winelands meet the semi-desert Karoo. Come ride with us on African soil!