Neighborhood climbs outside of Huaraz...

For a little over a year it was just a pipe dream. I had come across the Cordillera Blanca while sifting through google maps one day and was immediately struck by its rugged and unique landscape. For a few months I kept looking back, doing a little more research, and eventually making a few routes. It was always just wishful thinking though. I had never even left the country before and I knew about as little Spanish as you could possibly know. It wasn’t “realistic”, so I just kept the idea floating around in the back of my head… Fast forward to late September, I’ve got a window of opportunity to take some time off from work. I toss around a few domestic plans, but I keep coming back to those wild switchback-y roads I had seen that climb to altitudes that don’t even exist in my corner of the world.

With only a couple weeks to go I say screw it, Peru is the destination. Just the right number of people had told me it maybe wasn’t a “good idea” to do a trip like this solo, to the point where I knew I had to make it happen. If I had to wait for some perfect scenario to come along, it’ll never happen. The overnight bus ride was the first indication of what kinds of altitudes I was going to be dealing with. On the way into town it gradually goes from sea level to about 14,000ft before dropping into the valley where Huaraz sits. Somewhere along the way the pure lack of air was enough to jolt me awake from a jet-lag induced coma. I couldn’t help but laugh just thinking about the sheer number of times I’d be riding over passes well beyond 14K. I spent a few days setting up, acclimatizing, and exploring around random roads leading into the Andes before setting off for good. In my random “exploration” rides I found a route that looked intriguing, so I decided to take a bit of a detour on the way to Huascarán National Park, which was where a significant portion of my route would take place.

It hit me a few days in. I woke up to freezing rain pelting my tent at about 13,000ft. The first sign was weakness. I couldn’t move a muscle without feeling like I was on the edge of passing out. I was feeling great during the few days I had leading into this, so it felt like it came out of nowhere. My first thought was the altitude, but I camped at an even higher altitude the day before and felt fine, so I thought “maybe it was the water?”. I filtered everything I consumed, but I started thinking about every microscopic water drop getting on the outside of the filter and seeping in. Maybe it was food? Who knows… In the end it took me almost 8 hours to breakdown camp that day and pack up the bike that took around 30 minutes the day before. Grab one thing, put it in a dry bag, lay down for five minutes. Rinse and repeat.

I deliriously descended 25 miles down the mountain to the nearest town I could find. Stumbled into the first hotel I saw and essentially passed out on the bathroom floor for the better part of a week. The thought of riding a bike over the 16,000ft pass looming behind the town seemed hilariously impossible at that point. Just walking across the room was a challenge. A couple days in and I could still barely stand up because of extreme dizziness. In my mind the trip was essentially done. I was so close, but so damn far away from doing what I set out to do. 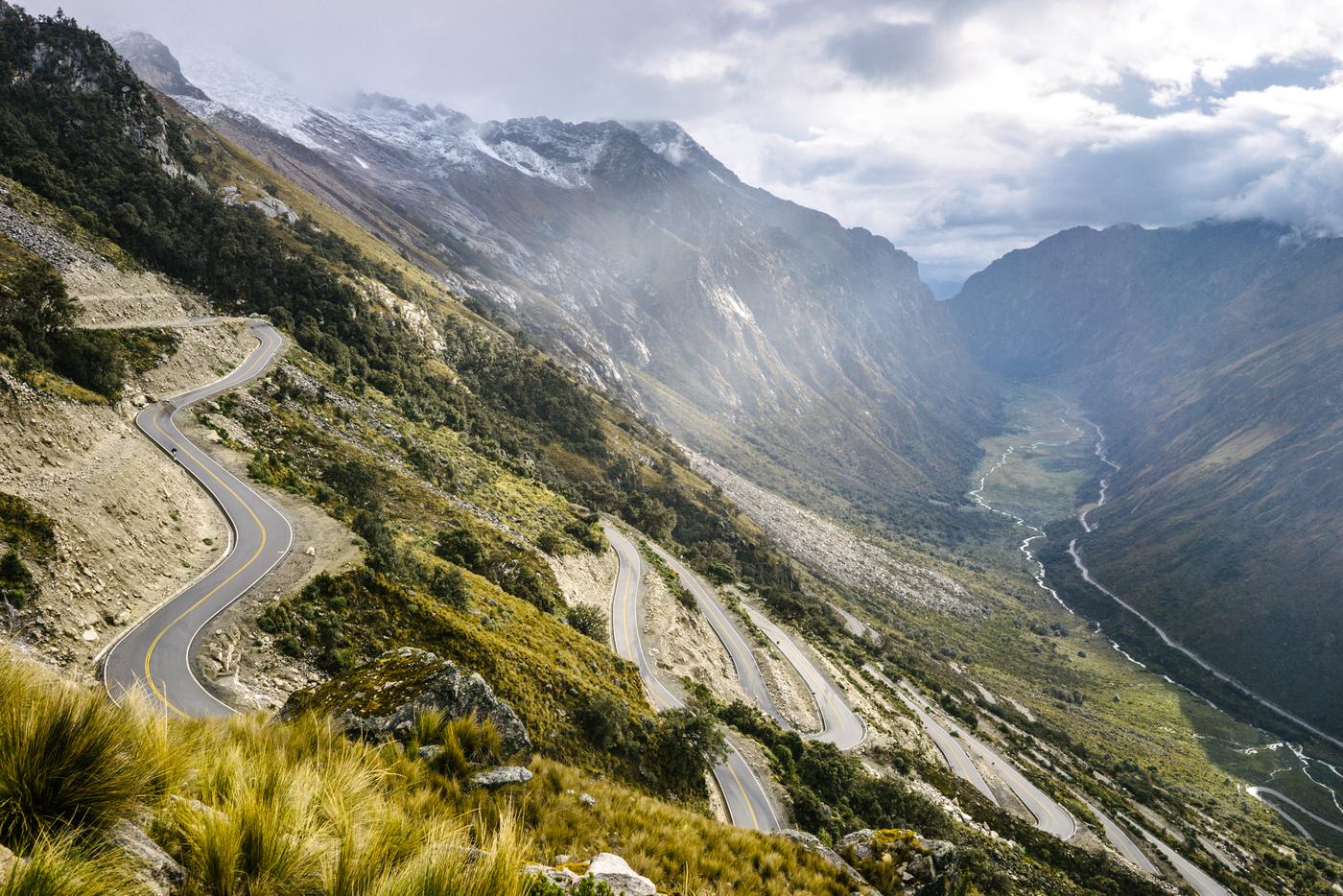 After a few days I started eating again, and slowly forced myself to ride small distances. Eventually I summoned the energy to ride far enough that I decided I needed to come up with a new plan to finish as much of the route as I possibly could. I stashed any piece of gear that wasn’t totally necessary, and set off to complete the rest of the Huascaran circuit in two days with my newfound “lightweight” setup.

Looking at 140 miles and 20k ft of climbing at these altitudes for my last two days of riding (and knowing how physically weak I was at that point), I set off before the sun came up and rode well after dark both days. Crawling over that first 16k foot summit at Punta Olímpica which seemed like a physical impossibility only a couple days prior. These were easily the two most difficult days on a bike I’ve ever done, and unquestionably the two most satisfying. Peru is a place with a few pitfalls for a traveling cyclist. The water is trying to kill you from the inside. Endless dogs roam the foothills, and love nothing more than to harass you (I got chased literally 30-40 times per day). But the people of Peru are some of the most welcoming and the roads traverse some of the most spectacular landscape in the world.