I had scheduled a shoot in NYC with Alpacka raft to go urban bikerafting in New York’s East River. I figured Minivelos have always been touted as the perfect urban bike for getting through the cramped spaces of the dense city, so what better accouterment to an urban packrafting trip than the ultimate urban bicycle. I dropped Velo Orange a line and they were more than happy to ship the bike up to NYC to meet me for the trip. 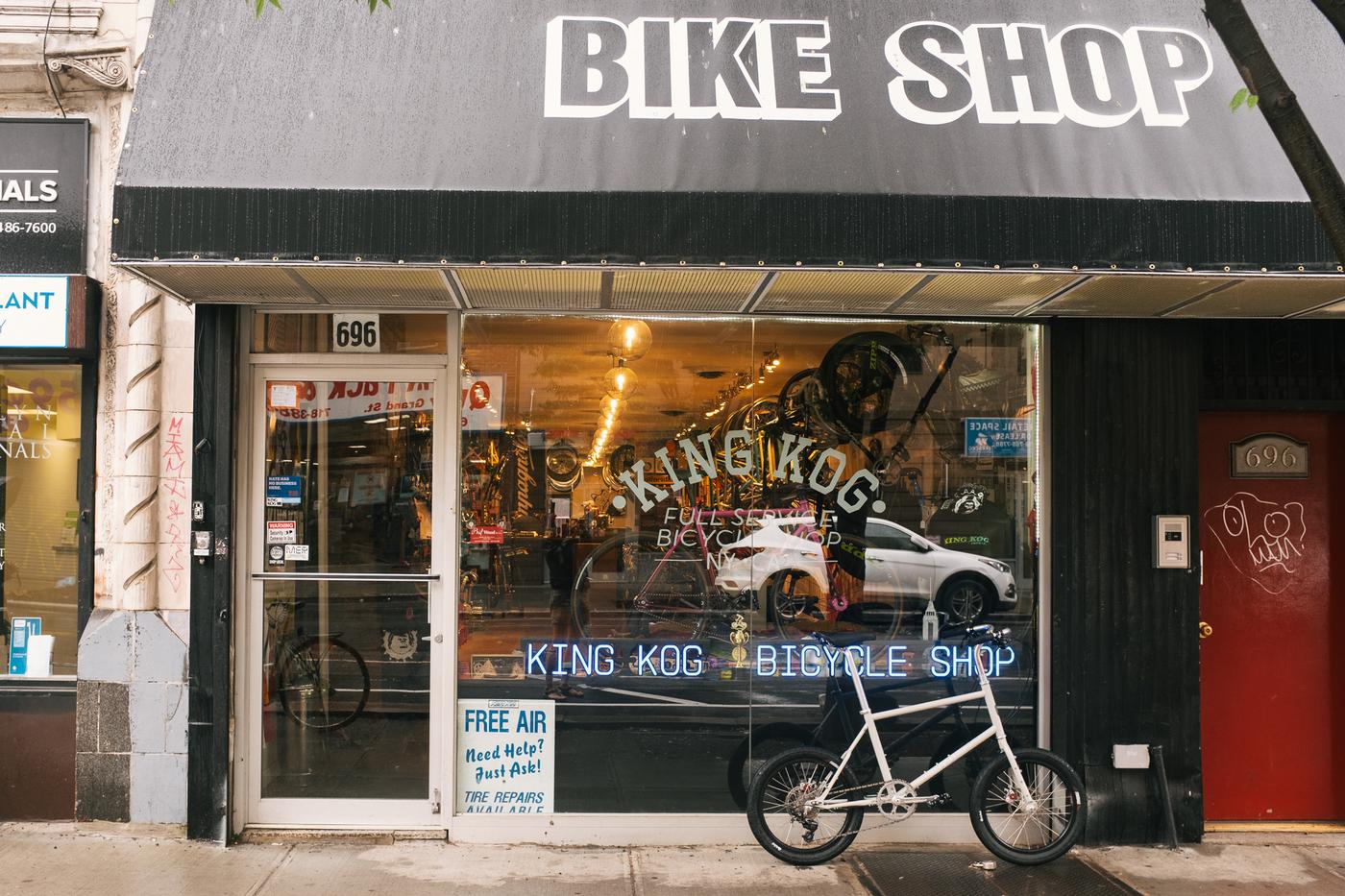 I picked up the bike at the infamous King Kog in Brooklyn. After drooling over my 2008 track bike dreams hanging all over the walls, I finally got my eyes on the Neutrino. Clint from Velo Orange had shipped an extra Cigne stem which helped get the bars appropriately high for my lanky frame. After a little futzing and futzing, I was on my way and I made it just a few blocks before I was flagged down by an interested cyclist who had seen some teaser photos online.  The bike felt incredibly zippy and after a few blocks I had adjusted little amount of “twitchiness” of the smaller wheels, but not long after that, I’d have to remind myself that I was riding a minivelo and not a larger wheeled bike. The small wheels made last-minute corrections while navigating backed-up up traffic a total breeze, while I don’t miss riding in traffic often, I do relish the moments I get to split lanes through a crowded road, and the Neutrino made this a total blast.

After just a day or so in NYC I was already feeling the need to bug-out, and it so happened that Mr. Ronnie Romance was at his childhood home just a few hour train ride away in Connecticut. Having heard fabled stories of the “soft times” in Nutmeg Country I just had to go. On the train, Bené sent me a map of a 60-something mile ride, which upon my arrival at 2 in the afternoon felt more than wishful thinking. After a brief tour of his childhood home, we rolled out to meet Jen and Troy at some country road intersection. The old carriage roads were a pleasure and after letting a little air out of the rock hard BMX tires, everything was much smoother, but far from supplé. As I chased Benedict around the countryside, I constantly found myself looking down to be surprised that I was riding 20” wheels. After a lovely cruise, shorter than the original mileage but nonetheless included a chance encounter with JP Weigle and more miles than I’d normally ride in a day. My butt was a little sore from the saddle that was a little narrow for my sit bones, but the bike had handled; carriage roads, pavement, steep hills, and even some pretty rough double track no problem, a quintessential multi-surface ride to test the bike. The next day I had to head back down the hustle and bustle of the city and prep for the packrafting trip.  On the way to the train station I stopped at Mr. Shredward’s house, he took the neutrino for a spin and likewise gave his seal of approval after a brief cruise. 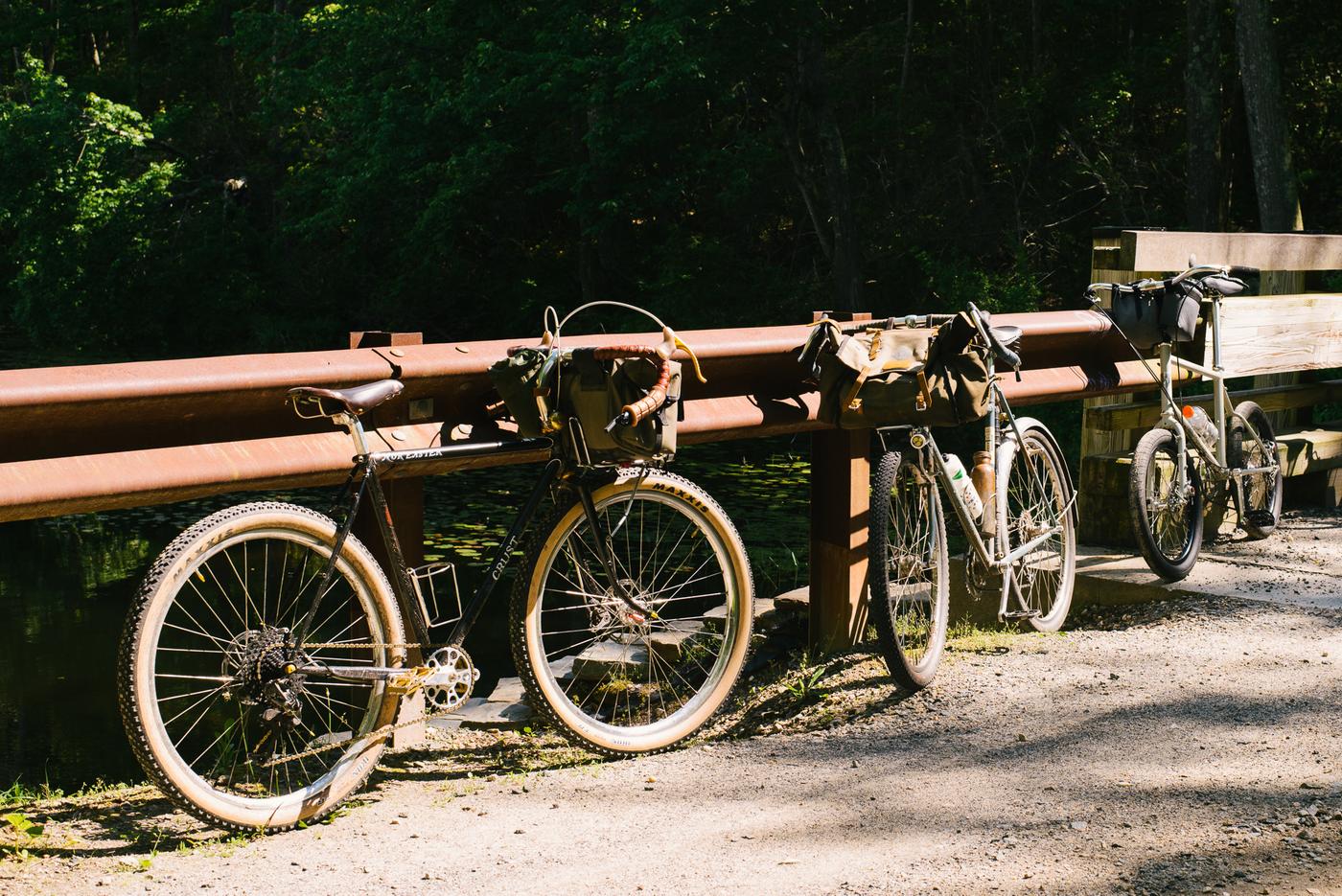 For the rafting trip I had brought a few bags to pack the bike out; a Revelate Designs pronghorn to carry the raft, a Porcelain Rocket DSLR slinger for my camera, and a Roadrunner Bags Autopilot for my second lens. With a few pounds of weight on the front of the bike, the bike handled great, I’d even say it leveled out the twitchiness of the handling. That being said I have always found most bikes to handle better with some weight on the front. In this same vein, this bike could be a great candidate for Cane Creek’s new Viscoset to even out the steering a little.

Rolling around NYC with the bike loaded was just as pleasurable as unloaded which makes me think this bike would be a great candidate for light bikepacking or road touring alike. the plethora of mounting braze-ons all over the frame and fork make it able to take a vast array of racks and bags.  Once we finally got our boats on the water the real reason I had wanted to try this bike came into play, the way it would sit on the front of a packraft. Normally when packing a large-wheeled bike on the front of a packraft you need to remover one if not both of the wheels to get it reasonably fitted on the front of the boat. With the Neutrino, I just put the bike fully built upon the front and it fit fine, though in retrospect I would prefer to take one wheel off to make a little more room for paddling, nonetheless, it worked fine with both wheels on. For the neutrino’s final trick, it fit perfectly in the back of our Uber van at the end of the paddle, alongside all the other rafts and gear. 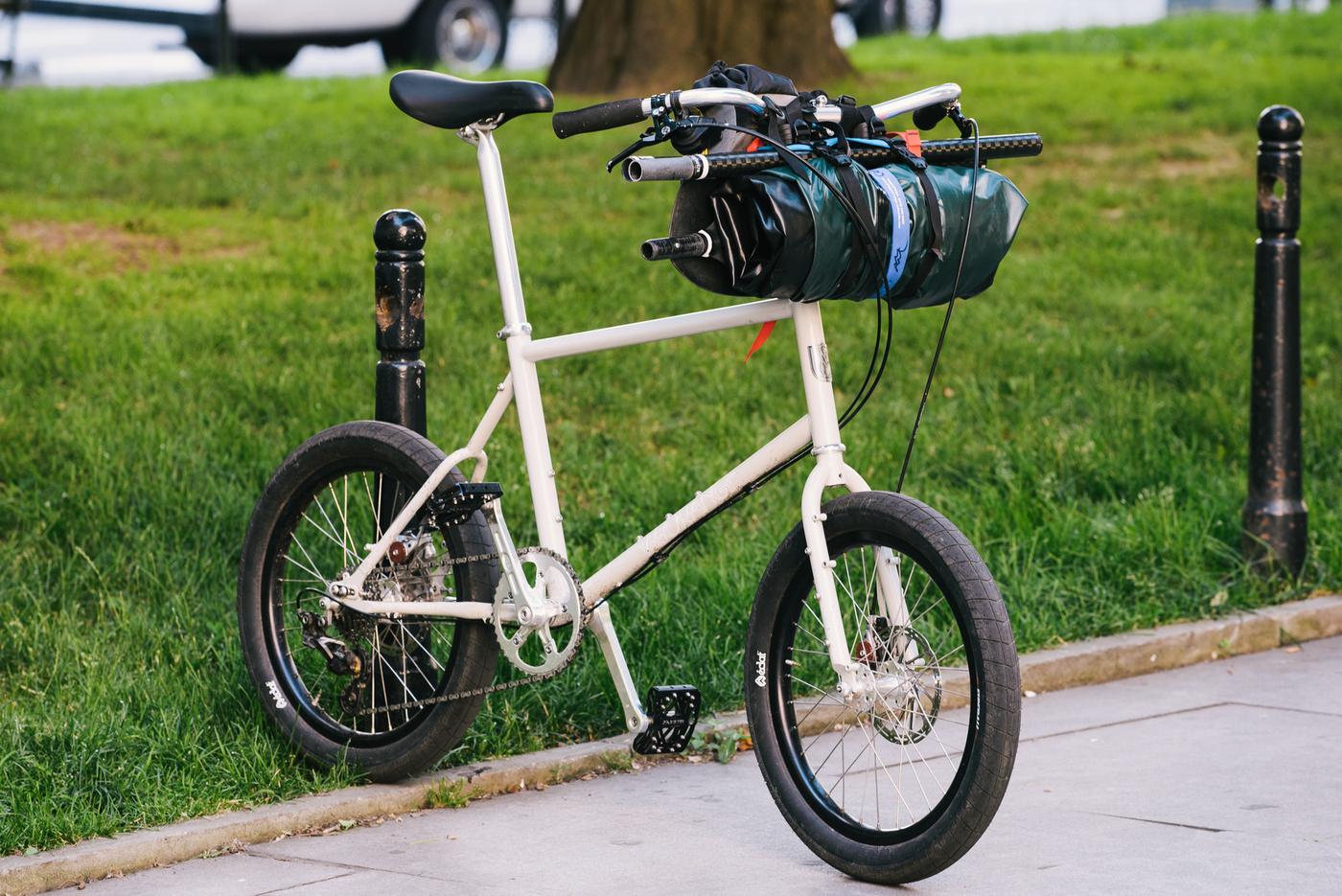 The bike I was loaned had a lovely and reasonable build for the city and light gravel grinding, but with such an amazing blank canvas had my mind racing with possibilities. It wasn’t the full plus/fat minivelo of my dreams, but honestly, almost anything can be ridden on a 2.4” tire that the bike easily clears. The bike was decked out with a slew of incredibly lovely Velo Orange Grande Cru parts, I especially loved the feeling of their Grand Cru levers, which were some of the best I’ve ever used. I really liked the fact that a Zee DH derailleur served the unusual function of being clutched and short cage, which helps it avoid dragging on the ground with the small wheels. The most subtle but one of my favorite details was the faint sparkle in the clear coat over the Cool Gray paint, gotta have that shine.  While the saddle didn’t agree with my sit bone width, I did really like the included saddlebag mounting points on something besides a Brooks saddle.  Unlike a lot of folding options, this bike uses all standard parts, so you can dream as big as you want or dig deep into your parts bin alike. 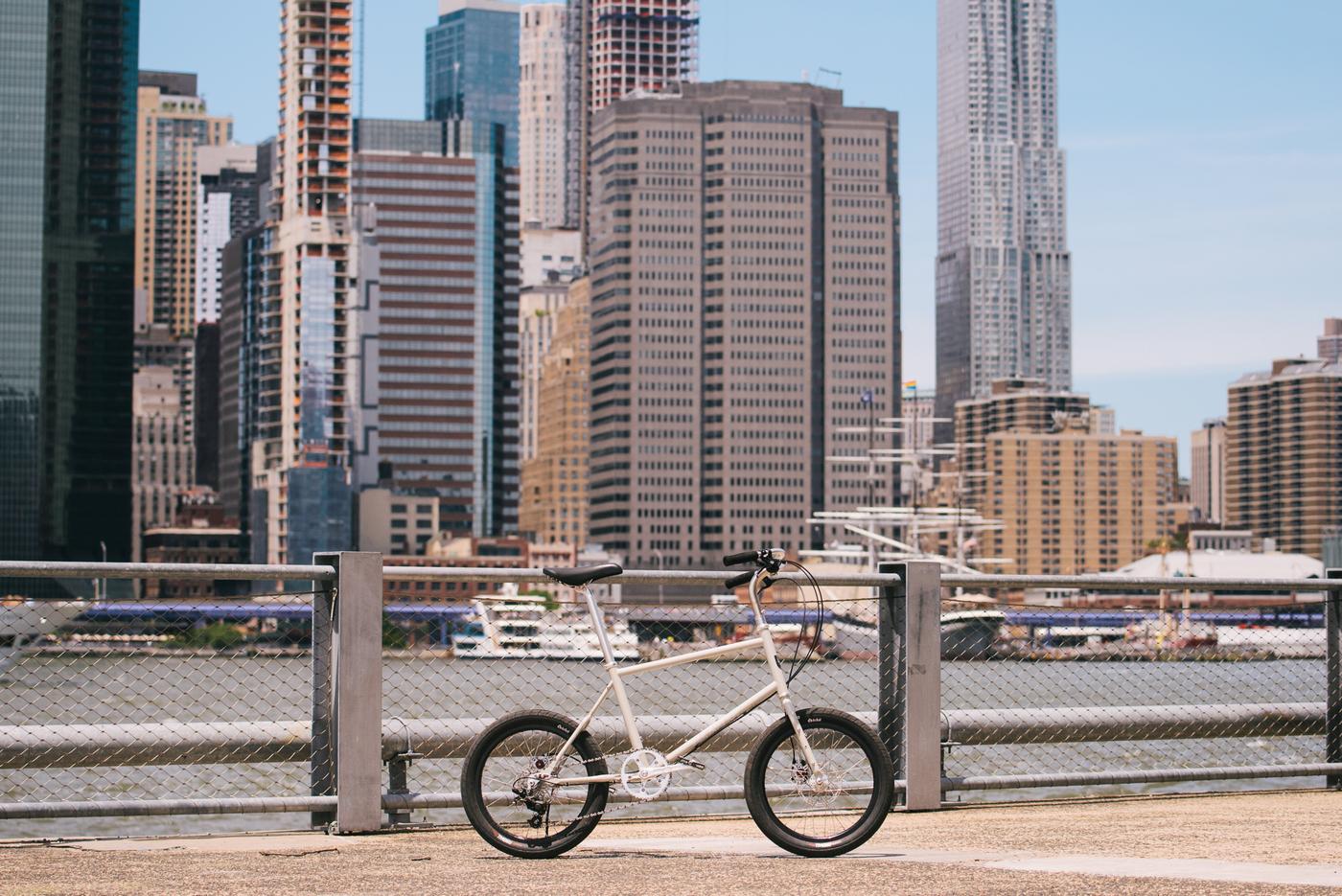 My mind is already racing with the idea of an internally geared bikepacking style build for this thing, a tiny surfboard/tiny bike tour kinda deal with the pleasure of checking in a box that fits standard luggage sizes is already comforting my soul. The frame is designed that if almost totally disassembled it will fit in a box that is below the 63 linear inches required for a standard checked bag while flying. The box the bike ships in can be used, but a nylon bag is in the works as well. After my jaunt on the Nutmeg Country carriage roads, I feel comfortable recommending this bike for some off-road use, I wouldn’t send it too hard, but this bike is far from delicate and definitely not a noodle.  I could see it being equally capable with lighter tires and some drops for paved excursions. There isn’t a whole lot that seems out of the wheelhouse for this frame if you have the imagination, of course, it won’t handle anything quite the same as it big-wheeled companions, but that’s not the point. 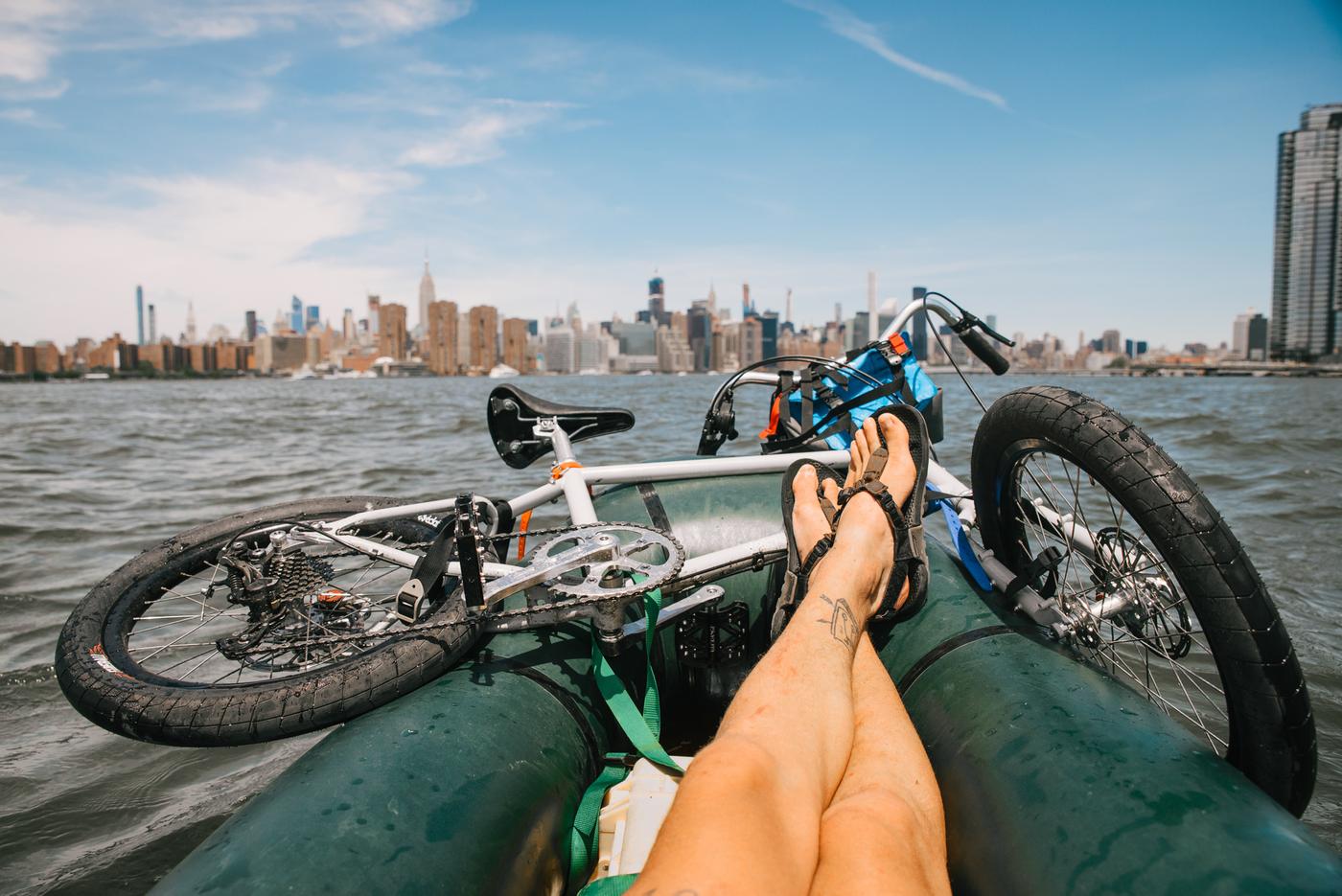 If you find yourself traveling often and having trouble fitting your bike in small spaces like a car (this came in handy TWICE during my short time with the bike), apartment, or box for shipping then the Neutrino offers an amazingly versatile frame to fit whatever your needs might be.  From the soft roads of Nutmeg Country to the Gritty Streets of NYC, to the back of your Uber ride, Even a dip in the east river, The Neutrino is perfect for all your versatile yet compact needs.  The frame only comes in two sizes small (<5’6”) and large (>5’6”-6’), I found myself (6’1”) to be at the upper end of the sizing. While the Cigne stem helped a lot, anyone much taller than me might have fit issues or just a more leaned over position.

The biggest take away from this whole experience was that I regularly forgot I was riding an abnormal bike, It just rode wonderfully, it showed its true colors in tight situations, but quickly went incognito in my mind down the road. Velo Orange has truly created a gem of a blank canvas with this bike, and if blank canvases aren’t your thing they are offering a full build as well. My dream is of an ever-so-packable bikepacking rig, but what do you see in the possibilities of the Neutrino?