When Alpacka Raft approached me about shooting a trip to New York, my mind started running with places upstate I had heard so much about in the past. But, that was quickly tempered as I inquired further to find out that they intended to raft the East River between Manhattan and Brooklyn.

I’ve heard fabled stories of the pollution in the East River, and as it seems the New York City Department of Environmental Protection categorizes the East River as Use Classification I, meaning it is safe for secondary contact activities such as boating and fishing. This basically means you can get splashed, but seriously don’t swim, maybe not the most enticing idea for a float but here we go.  Having spent most of my time paddling in the San Fransisco Bay and Los Angeles “River” I figured I would feel right at home in the polluted, salty, stinky waters of the East River.  Alpacka has been interested in extending the use of their rafts into the urban arena, and what could be more urban than NYC. 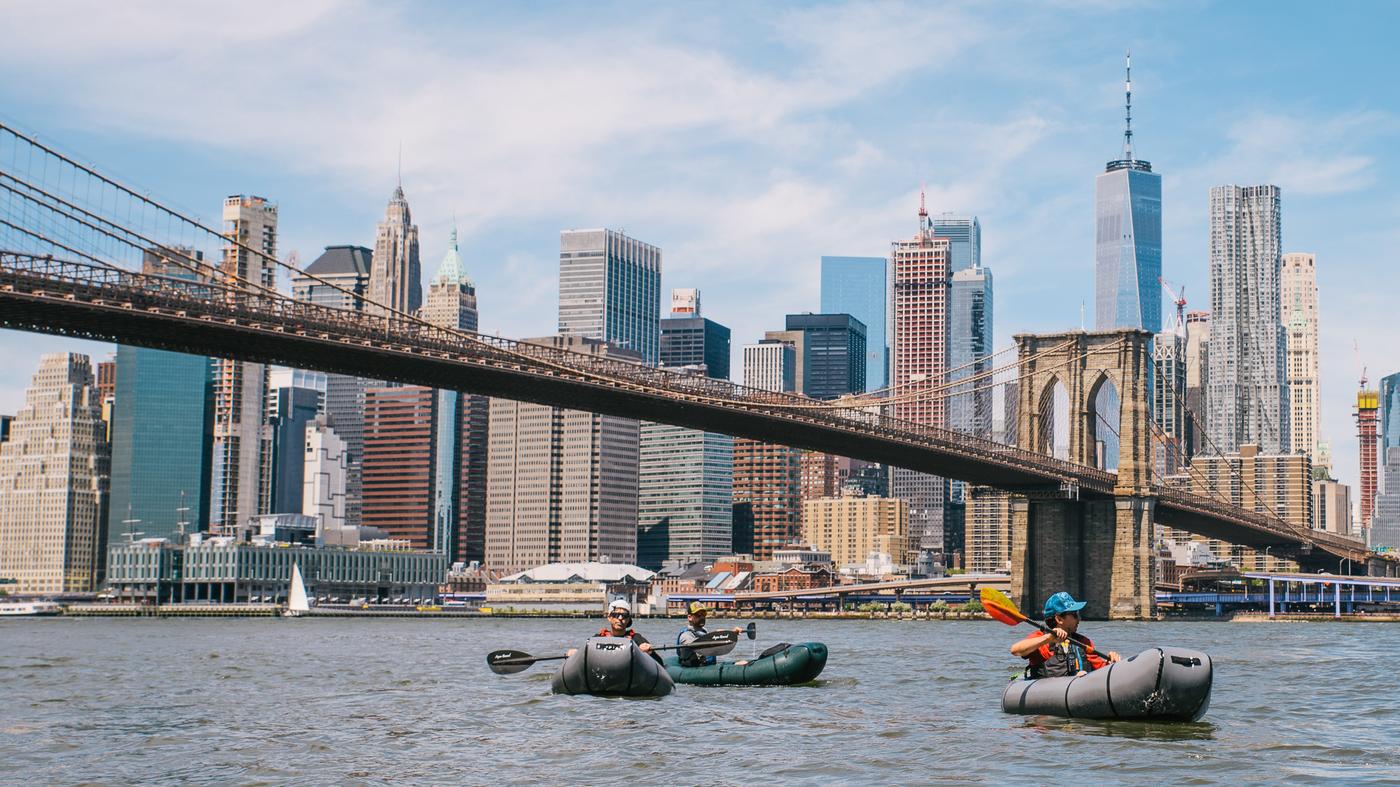 The plan was simple; pedal down the west side of Manhattan and over the Brooklyn Bridge then paddle up the East River.  We would be showcasing their new Caribou model which is specifically designed to be lighter weight and carry a bicycle.  In addition, I was generously lent a prototype Velo Orange Neutrino (More thoughts on this later), which with its small 20” wheels seemed like a perfect accouterment to the packraft. Urban packraft meets urban bicycle, all in a compact package.  Typically packing a regular size bike onto the front of a raft would require at a minimum of removing one or both of the wheels, with the Neutrino I was able to leave the bike wholly together. 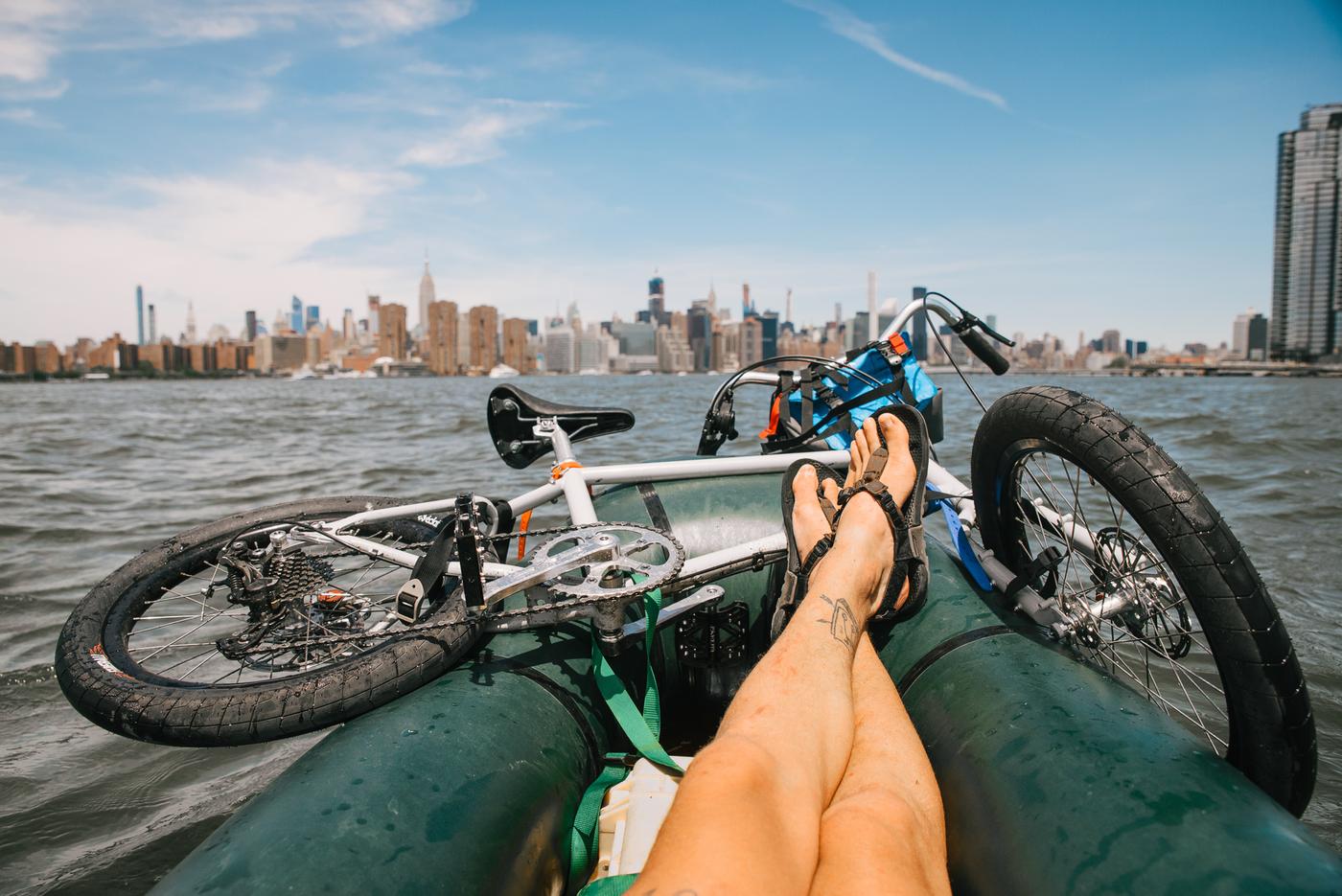 We assembled our small team of rafters in Manhattan near Times Square.  I already had a bike, but the rest of the squad walked a few blocks to load up some Citi bikes, NYC’s own bike-share program.  Turns out the little basket on the front of the Citi bikes was perfectly sized for a raft and paddle.  While the Citi bikes wouldn’t be able to paddle with us, bike shares nonetheless can make the need for a shuttle unnecessary as you can leave them at any docking station near your put-in. After some stuffing and clever Voilé strapping, we had our gear all loaded up.  We began our cruise down the Hudson River Greenway, weaving between the weekend warrior roadies and joggers alike.  It’s an ideal summer day in the city and everyone is out on the path for good reason.  A short wiggle through the financial district and we started our Journey up and over the iconic Brooklyn Bridge. We survive only having one or two close calls being clotheslined by selfie sticks.  On the other side, we dock our bikes near the waterfront park and stroll over to our put-in.  Pier Four is a small sandy beach that makes a perfect spot to set up our rafts and get in the water. There was a cute dog on the beach which I was pretty sure I could steal for some doggo-packing but alas it was afraid of water, we still got some good pets in. 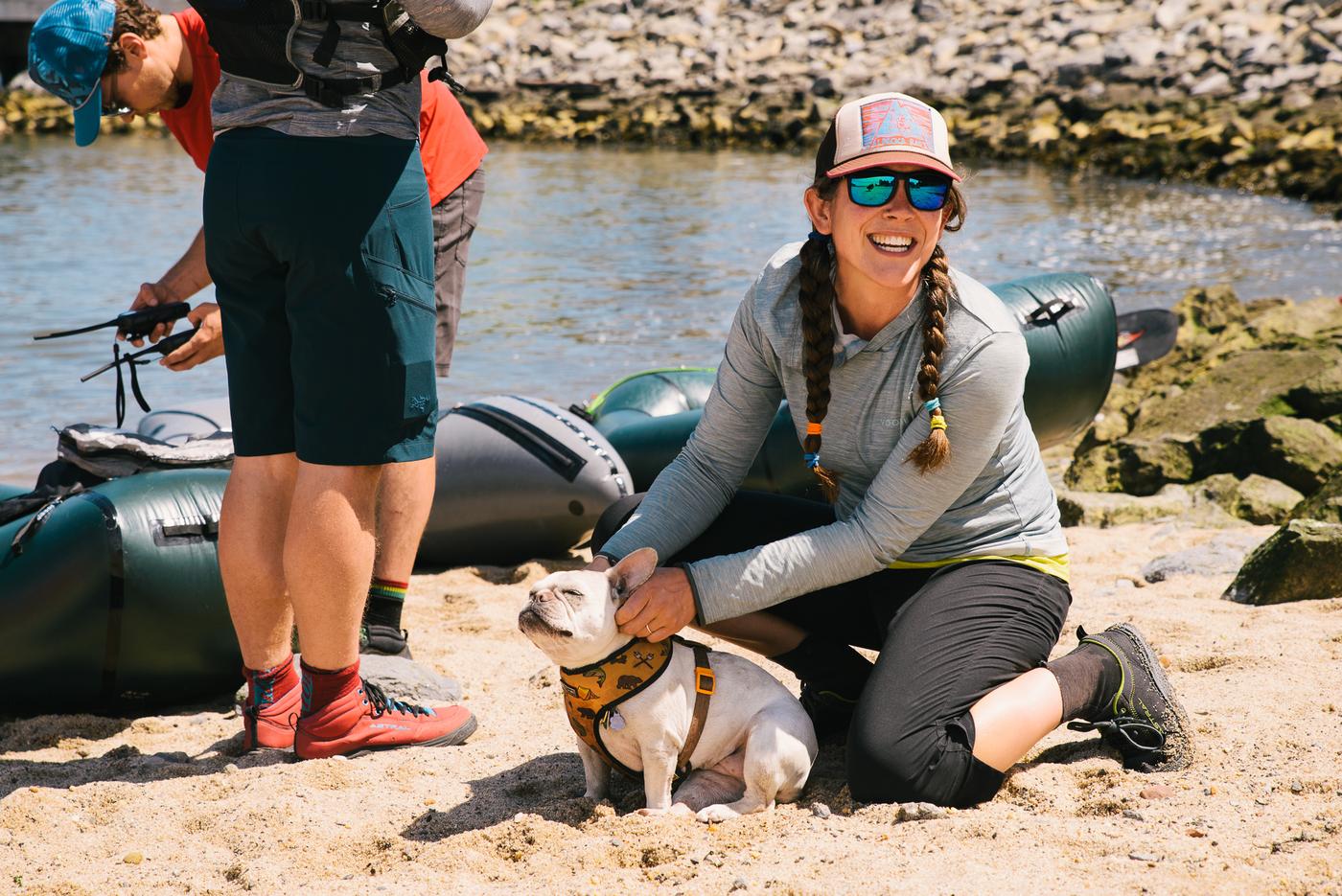 Once we got in the water we had a short time being out of the main current of the waterway to get aquatinted with the new rafts.  Turns out the East “River” is actually a saltwater tidal estuary, which is quite advantageous as you can plan your trip according to the tides to go whichever way you would like up the waterway.  We planned our trip to catch the tide heading up toward the Bronx and it turns out it is a helluva current.  As we get out into the current proper we have our first and possibly most harrowing obstacle, the busy ferry terminal at the base of the bridge.  We bob between the large wakes of the ferries embarking and departing quickly from the terminal.  After passing under the Brooklyn and Manhattan Bridge our sailing gets more smooth as the tide takes us northeast.  Floating under these massive spans you truly get the impressive scale of the bridges that cross the waterway.  We hug the eastern shore as we make our way in the current, intermittently adjusting our direction to ride the wakes of the passing ferries.  After Roosevelt Island, we cross to the west side of the waterway to paralleling FDR drive just out of sight of the busy commuters.   Shortly after that crossing, we start to meet the confluence of the Harlem River, which is, unfortunately, flowing in the opposite direction we are heading. After a short upstream paddle, we pull our rafts out at Randall’s Island Park.  If we were to continue we would need to wait a few hours for the flow to shift directions.  We dry the rafts out and start to pack them away. Joe calls a van for us and with a little stuffing we are able to fit my bike, six people, and all of our rafting gear in a single van, and now for some celebratory beers. 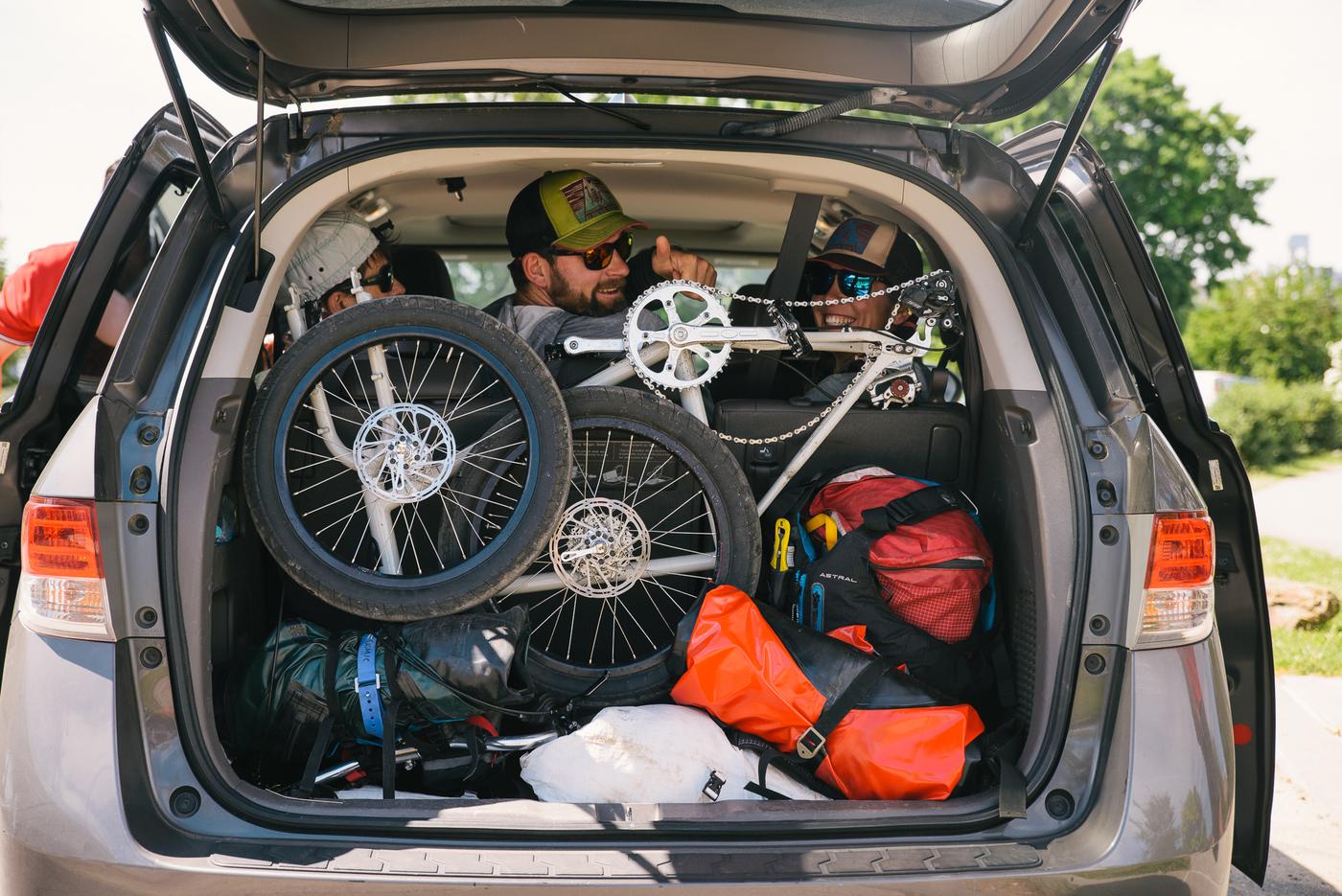 While this was a pretty short and sweet trip to showcase the possibility of urban packrafting, it has my mind buzzing with possibilities of places that could be explored via water instead of just simply biking.  The bike becomes the means to make the trip a complete loop.  For years these rafts have opened the doors to epic landscapes in Alaska and beyond, but they continue to allow us to look right out our front door at the possibilities close to home as well.

We secured permits to paddle and also carried a radio to communicate with the ferries and other ships in the waterway.  These rules should be followed and precautions taken by anyone attempting to do a trip similar to this.