The touring world is changing, no doubt about it. Steel frames are still the norm for obvious reasons, but disc brakes are now widely accepted and people are venturing far and wide with component choices that only a few years ago may have been considered imprudent.

One group doing this is the young and adventurous among us, arguably oblivious to their equipment’s lack of serviceability. Under these pioneers, bikes go into the wild with sometimes ugly, yet highly functional home-hacked solutions that get the job done. They are out there for the pure experience, pushing the boundaries of equipment that only a few years ago was considered cutting-edge technology. Another side of this coin is people at bike companies, with access to the newest stuff before it hits the market, building custom bikes to their own specs to push the limits. It’s not uncommon to see mountain drivetrains on road frames, tires that are too big to pass safety standards, and so on. These bikes, however, rarely make it past the engineers’ and product managers’ personal collections.

When product managers spec bikes, they are held to account by bean counters making sure bikes will sell through – and that means sticking to tradition and not taking chances. I love it when companies have the guts to spec a bike in a way that’s pointed at radness rather than tradition. When I see a production bike deviate from industry norms in this way, my eyes light up; the Kona Sutra LTD is one of those bikes. 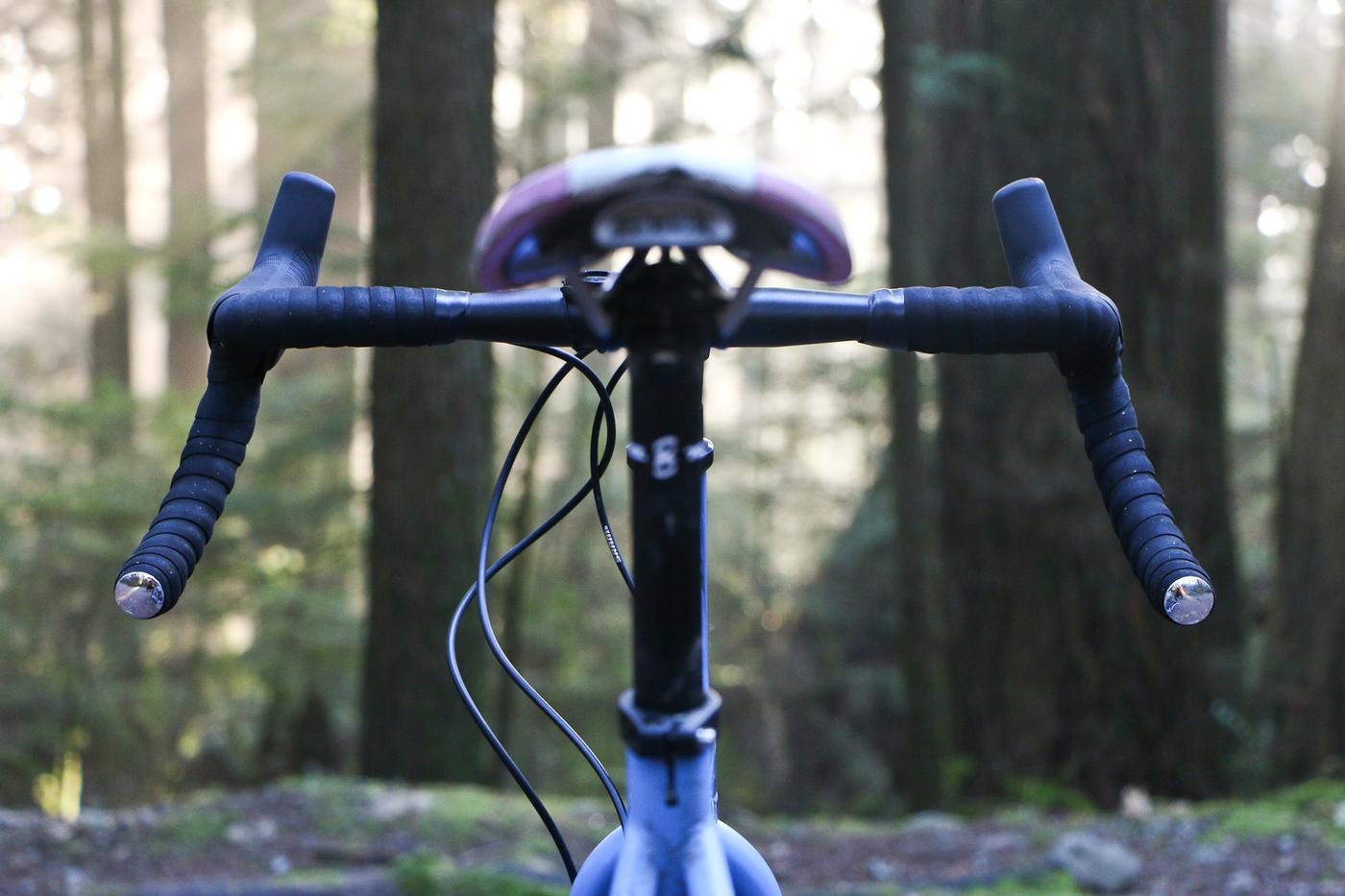 The touring mantra of 9-speed drivetrains, 26” wheels, and cantilever brakes – in the name of worldwide serviceability – is one that bikepackers are willing to deviate from. Is this a symptom of our convenient global economy, with easy access to almost anything at the click of a button? Or is it a move toward trusting high performance equipment even if it means the possibility of getting stuck for a few days?

Either way, the build spec on the Sutra LTD is a big departure from the conservative, anywhere-serviceable tendencies of long distance bike tourers. Hydraulic brakes, integrated shift levers, and bleeding edge drivetrain technology are not the traditional arena of touring bikes.

Mountain bike technology is spilling over into the drop bar world, and this is really what makes the Sutra LTD a possibility. Kona started out as a mountain bike company and they still do that job extremely well. When you consider the minds that the Sutra LTD has been borne from, its spec really makes sense – yet it is rare that a bike spec’d “as the designers actually ride it” makes it to market. Where’s It Coming From?

The Sutra has been a disc brake touring bike with a mid-length chainstay for over a decade. Over the years I don’t doubt that traditionalists have balked at that chainstay length – claiming it is too short for touring – but as touring bikes head further from paved roads, that number now seems pretty sensible.

The Sutra name and sturdy steel frame indicate its touring roots. The dirt drops, tall head tube, and long front center scream bikepacking. But the group is very much mountain bike, with a 10-42 1x drivetrain and hydraulic shift levers. The result is a touring bike that renounces touring tradition, though you can still get a Sutra with a triple if that’s your thing. 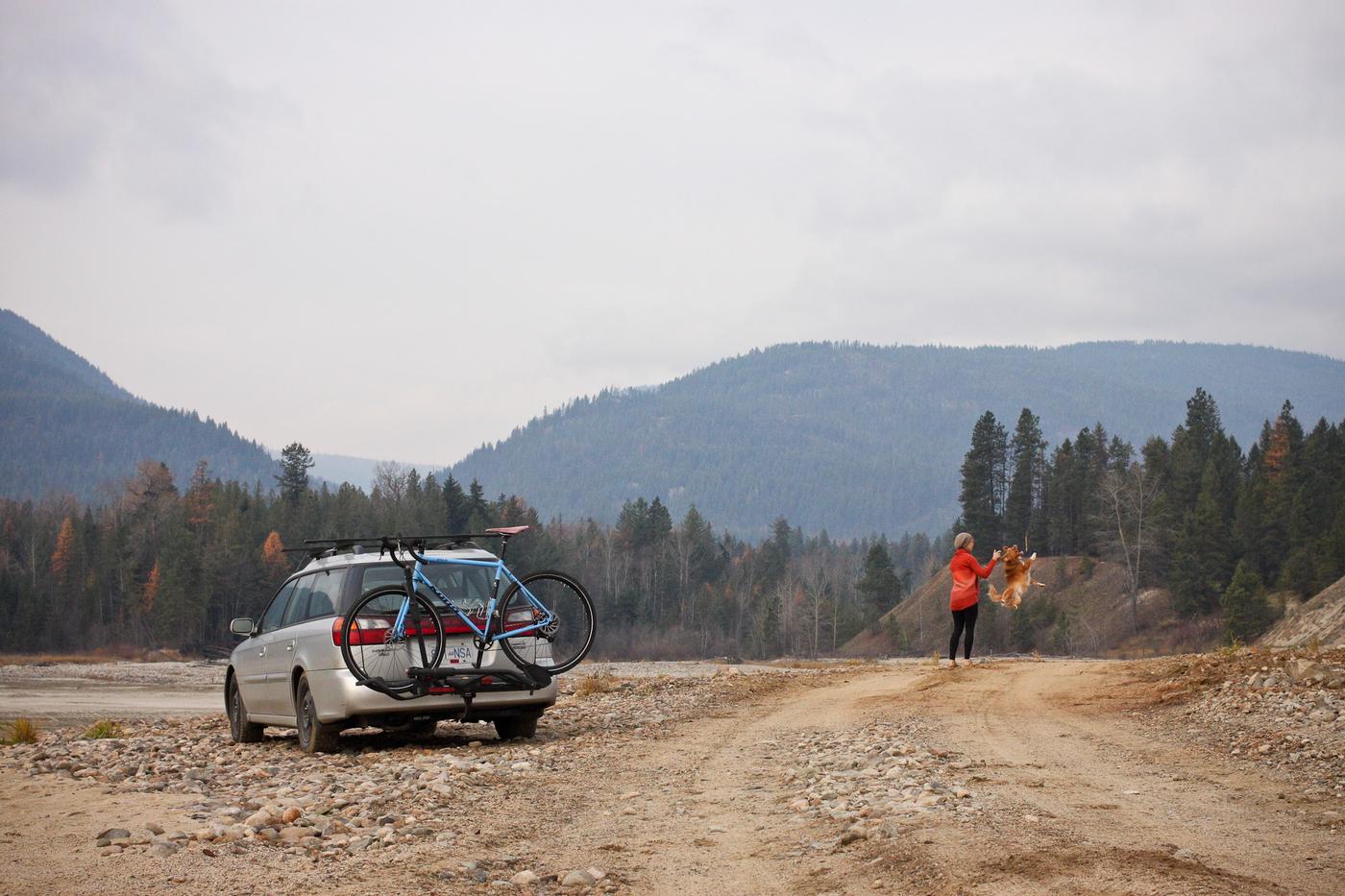 I don’t know if it’s because I’ve always ended up at one extreme of the traditional road geometry chart (the one with the steeper head angle), but it has always irked me that bikes seemed to be designed around an ideal medium and adapted to the smaller and larger sizes.

There is a point to this design philosophy: keep the wheelbase under control at one end of the size range, and keep toe overlap under control at the other. I just can’t help but think those compromises may not necessarily serve the rider’s needs on bikes that are being ridden on mixed surfaces. Design is Always a Compromise

The one thing I will say about this bike is it tends to ride very stiff without a load, something you will find in most bikes that can handle fully loaded touring. There was recently a fairly lively conversation on the site about the ride qualities of differing steel tubesets, some people claiming that bikes like the Surly LHT ride too stiff. Obviously the tubing choices on that bike lean toward stability with a load (how else do you create the most venerable touring bike on the market?) and that is also the case with the Sutra.

However, unlike the LHT, the Sutra retains an element of fun, of shredability, that a bike like the LHT doesn’t quite hit. The Sutra frames are designed around long front centres and short stems, which suits a dirt drop setup. With its wide bar and short stem, the Sutra’s stiff tubeset pays off when you get in deep. On rock-strewn gravel and technical singletrack, the Sutra handles like a mountain bike. 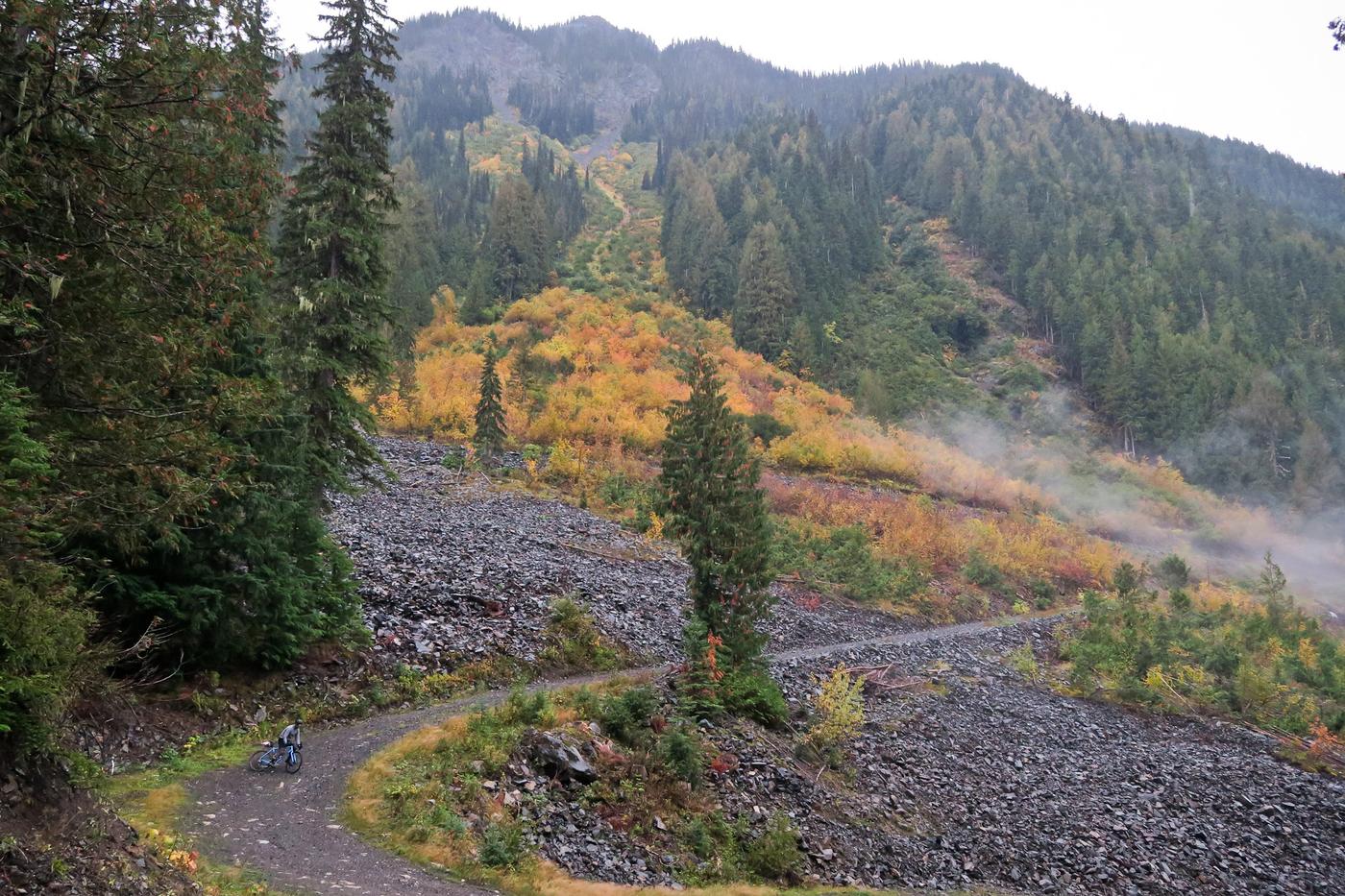 Given the burliness of the frame, the 47mm Schwalbe Marathon Mondials were an excellent spec choice: bombproof Marathon reliability, and relatively fast rolling on pavement given their excellent traction on varying surfaces. The only thing you can knock them for is their weight (at almost 900 grams a tire), but this is a tire you’d tour with and not even consider carrying a spare.

Aired down to 30 psi or so, the Mondials are surprisingly confidence inspiring on terrain more suited to knobby tires, their stiff sidewalls allowing low pressures without becoming squirmy. And while the lawyers probably aren’t happy about it, the Sutra will swallow up to a 29×2.0 and some 2.1s, which is just the ticket for those whose loaded adventures tend toward singletrack. Adding to this, the WTB Frequency i23 rims are great for tubeless setups.

Touring bikes do have this in common with mountain bikes: you need low gears to deal with extended climbs, period. The Rival 1 group is the trickle-down of SRAM’s Force CX1, making use of their 10-42 cassette to let you get that low gear. The flip side is that you don’t get a lot of total gear range out of a single ring, especially compared to a triple.

If this is meant to be a touring bike (which the tubeset would indicate), you need to choose your chainring carefully. The stock 36 tooth ring is in my opinion a bit big for loaded riding at 23 gear inches, but the Race Face direct mount crank allows for a wide variety of aftermarket options here. 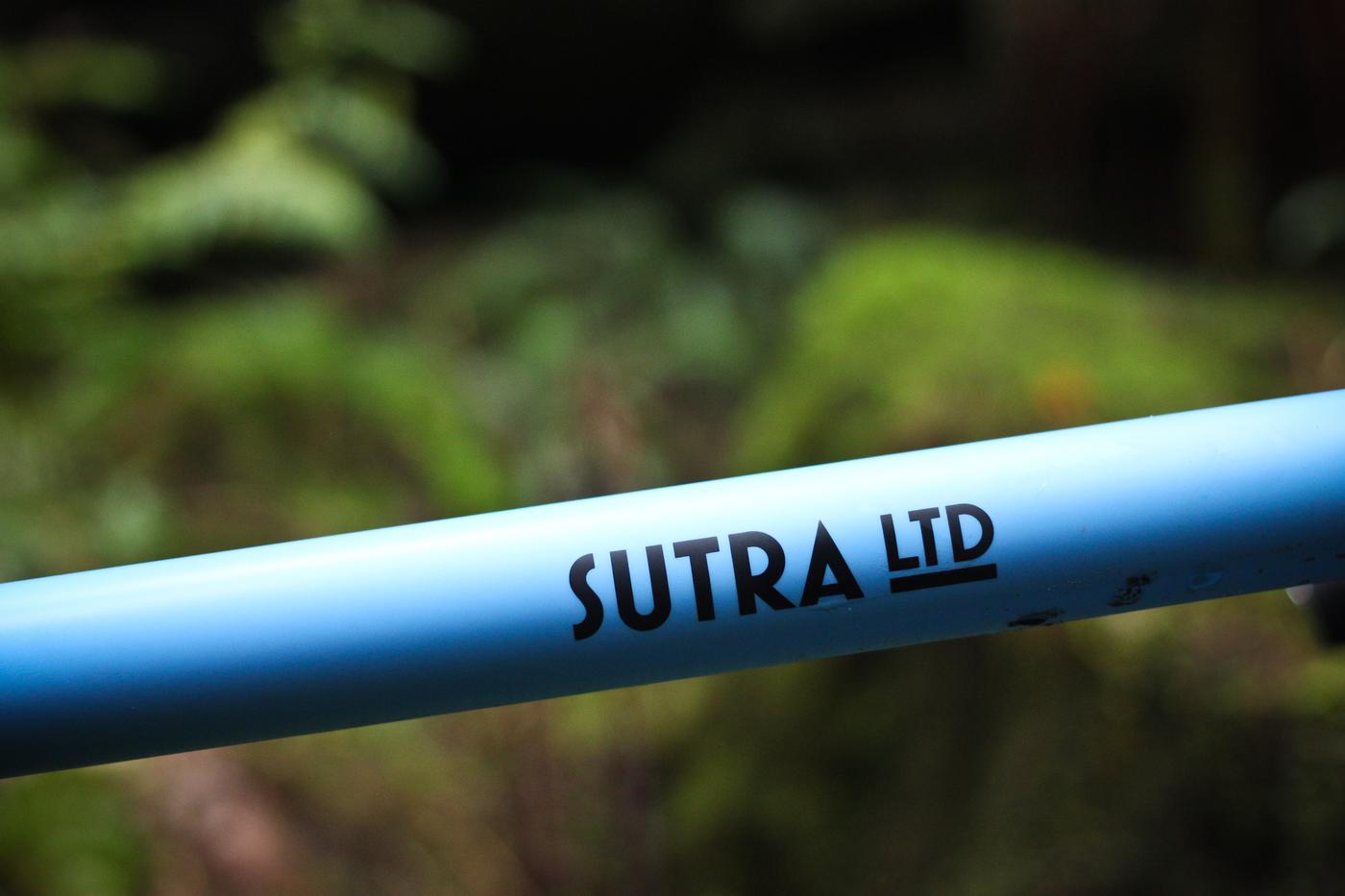 That powdery matte blue. The Sutra’s paint has a depth rarely seen in production bikes, shifting hue as the light changes around it. Because of this, I’ve included a variety of shots from different lighting conditions, but I still don’t know if I’ve done it justice. If you can get down to a Kona dealer to see this thing in person, do it. What Would I Change?

There’s always some amount of “what would I change” with a review bike, and here are my thoughts on that. First, and easiest: as mentioned above, I would put a smaller ring like a 30 or a 32 on that direct mount crank.

Next, while Kona’s short stem and wide bar bring a level of function that I know adds to its stability on mixed surfaces, I found the shape of the OEM dirt drop didn’t quite hit the mark. I wasn’t quite able to get the shift levers into a position that worked for riding on the hoods while also being able to comfortably reach the brakes from the drops. The Rival levers do have a 3-position reach adjust, but the curve of the drop is a bit too tight for my liking.

Finally, while I love the performance of the hydraulic brakes and the SRAM levers feel great, I would actually feel better taking this thing on an extended trip if it had mechanical discs. Out of the box, hydraulic brakes are great, but after a while, pistons get sticky and setup gets more finicky. 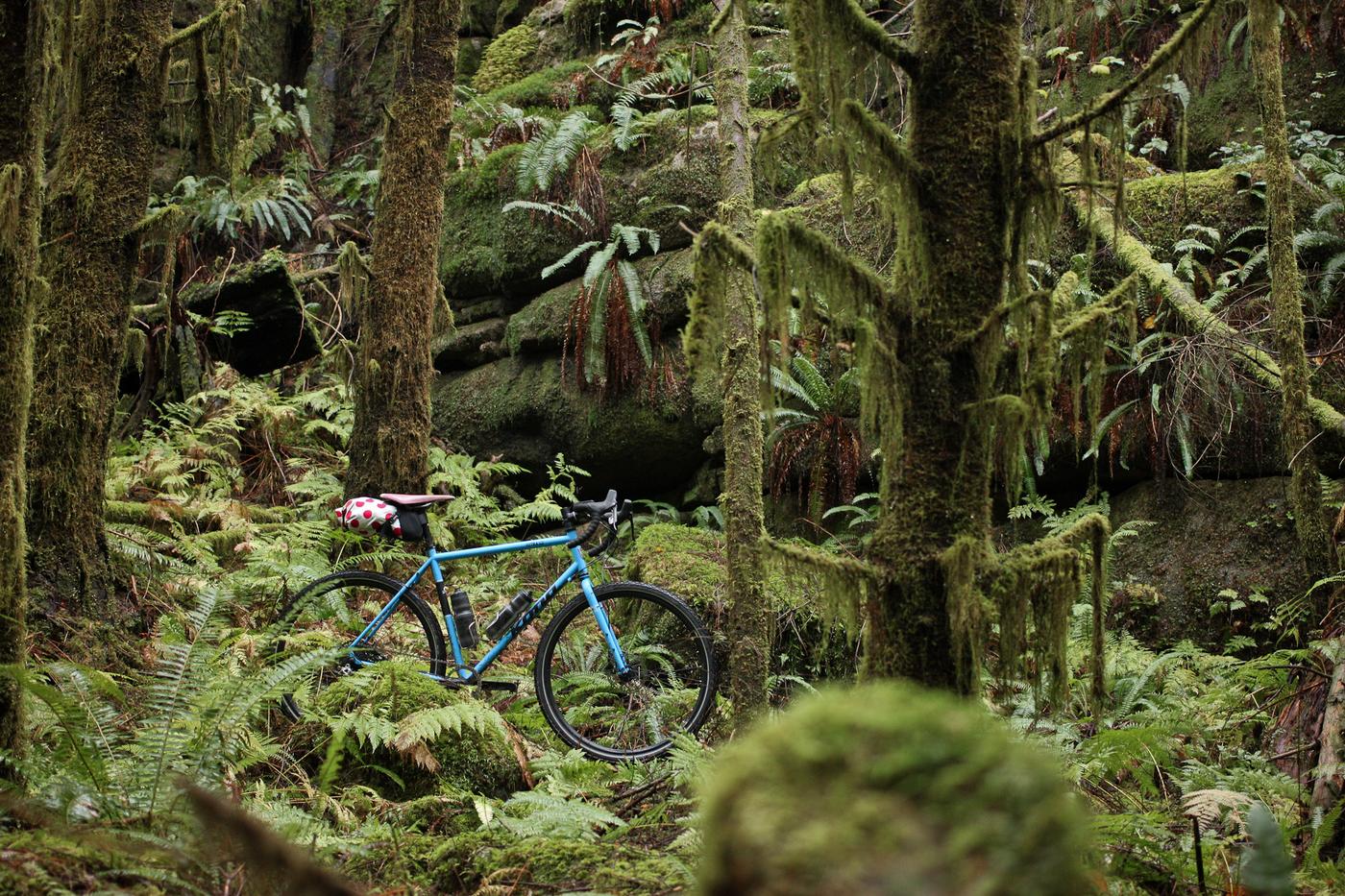 Kona’s bikes are not the flashiest on the market, but they represent a great value on the shop floor, and the Sutra LTD is no exception. The LTD’s very reasonable $1999 USD price tag is achieved by putting the money in places that create a really solid foundation: direct mount crank, Rival 11 with hydraulic brakes, and tubeless friendly WTB rims with folding Marathons.

With the spec on the LTD I want it to ride more lively unloaded, because this is exactly the kind of bike I want to ride on a daily basis. (As a side note, Kona’s Rove has that lighter tubeset, and a slightly shorter rear end, but doesn’t come with this spec.) Still, the intended purpose of this frame holds its touring roots, and it’ll be a solid companion on your long distance trip.

I feel that a touring bike should be spec’d in a way that makes it ready to go adventuring without having to replace “showroom” parts like crap tires, and the Sutra LTD hits this mark – as long as you’re not a retro-grouch.