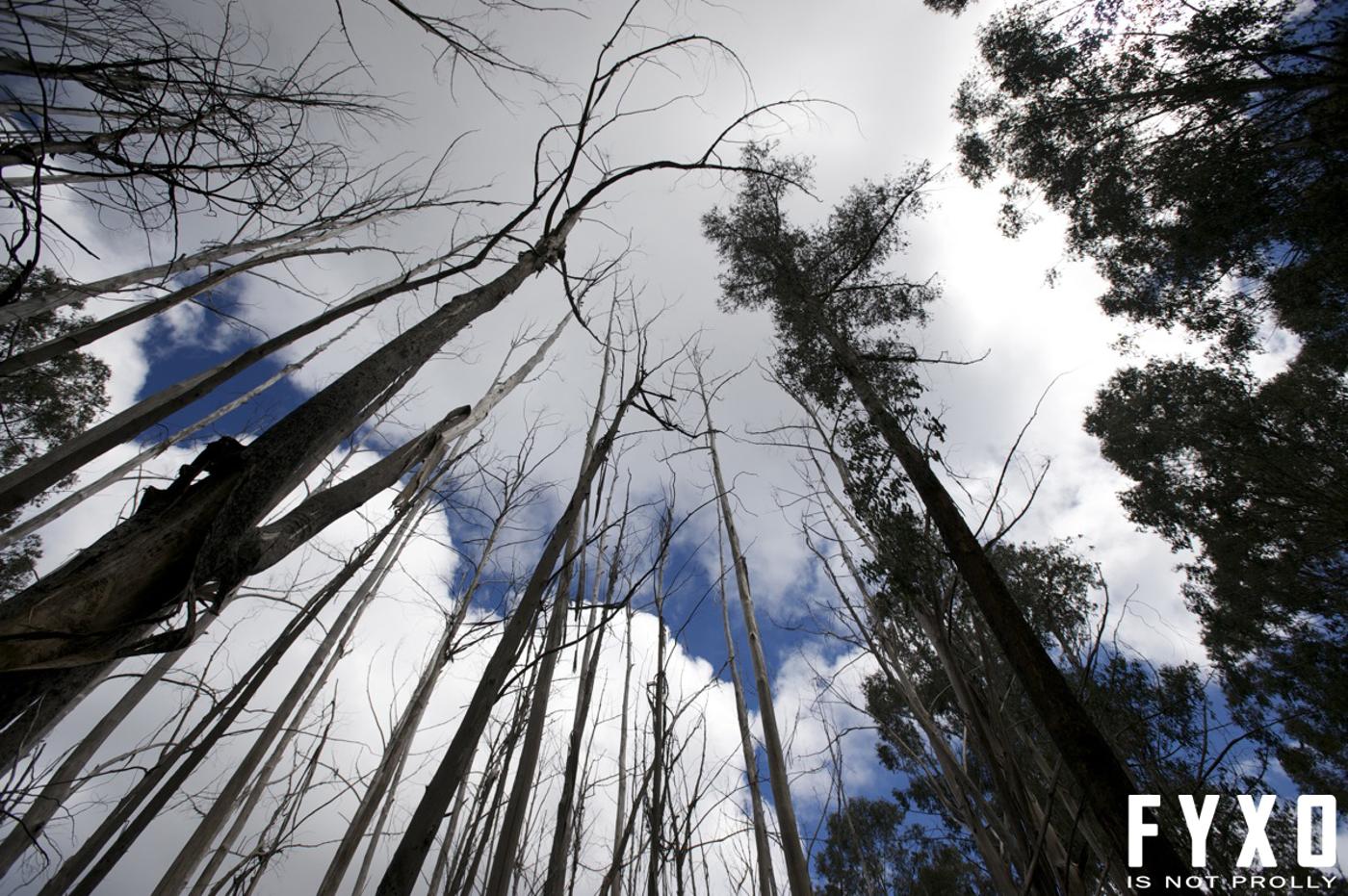 We started off on a country road where we startled a flock of black cockatoos. This was farmland and one of the two trucks we saw that morning let us know that our kind weren’t welcome there. A plume of dust arose from the UT as it tore down the roads.

The gravel was fine. It was predictable and since it had rained the day before, the dust wasn’t too bad.  Our real challenge was making it to Licola in time to refuel at the only shop between here and Rosedale. If we didn’t make it to the shop, we wouldn’t make it to the pub in time for dinner, leaving us to eat crackers at the bar.

The first climb was a tough one. We started at 1,000′ and climbed to 5,120′, all on unpredictable, shit roads. Not only did you have to watch your lines, you had to avoid flatting because between the three of us, we were running low on patch kits and tubes.

Dan and Andy are much more experienced than me, so they took off and I just sat and spun up the mountain.

Halfway up was a spring water source. I still can’t tell if filling up my bidons here was what got me, or the streams and rivers the day before.

It was either no water, or take a crap shoot.

Needless to say, this was the first time they waited on me for longer than a minute or two. Hell, I was taking my time, shooting photos and enjoying the scenery. Meanwhile, they left me a message.

And Dan took a nap.

After we linked back up, we descended into what looked like Middle Earth. The trees were barren from a harsh winter and the roads were only frequented by the department of agriculture. From October – March, they’re closed.

Descending through this shit was a blast. My bars slipped more than once and they were well torqued to spec.

You just kinda let go and pick your lines.

A short climb and we were almost to the top, halfway there, the scenery opened up, displaying the Great Dividing Range. It was unforgettable.

Dan and Andy had both been here, multiple times and they were still wide-eyed.

I just wanted to snack.

More climbing and at this point, the rocks and crevices had subsided.

I love this photo. That’s the road we came down behind me.

Rain had just moved through, so the wild flowers glistened with dew drops.

Already we were running low on water and Andy began to warn us that the road to Licola was still far. We were pressed for time.

The next stretch was tough but we all held on.

A pouch of peanuts replenished my body with sodium, so I could hold onto what little water I had left.

And it was bloody hot.

From here, 20 or 30 miles worth of photos are missing. We had to haul ass to Licola, down through a temperate forest with long, banking descents. The mud and moisture felt great, especially after being in the arid, dry mountain passes. It was like heaven. Once we got to sealed roads, Dan and I told Andy to go ahead and hold the shop for us. He descends like no one I’ve ever seen before and made it to the shop just in time for us to get some meat pies, crackers, water and sweets. The sugar is what killed Andy later but the Mentos saved me through the rest of the day.

As we were sitting in Licola, Dan laughed to himself. I asked what’s up? He replied, “NOTHING”. Turns out, the last time they did the ride, their mate told them there was no more climbing. Then three little pricks sting you, one after the other.

I was hurting. Like I’ve never hurt before. Even on my tour, I pushed myself hard but this was different.

For the first time on the trip, I sat down for five minutes. Well, laid down. Ok, I died.

I got back up, hopped on Andy and Dan’s wheel when we realized we had 30 miles to go until we hit Rosedale and our pub for the night. Andy got on the phone and tried to reach the pub to tell them to stay open. Dan called Zoe and finally, we got through. Their answer “no problem”. So we pace-lined it through the countryside, as the sun split the clouds and cockatoos flew through the air. It was amazing and yet we didn’t have time to take a single photo.

After a solid day of riding, we made it into Rosedale, where Lambros, a Greek and his wife cooked us a great meal and we drank a few pints in celebration.

The accommodations were quaint and the beds were comfy.

Unfortunately, my stomach decided to unleash the brown seas of an angry Poseidon and I was up all night with an upset stomach. Every 10 minutes, I was back in the bathroom, wincing in discomfort. When I finally got to sleep, the sun was rising. We had planned on doing a third day, back towards Melbourne on easy gravel roads but decided to call it quits. For a week straight my stomach wasn’t settled. It’s the last time I’ll drink from a dodgy water source. I’d rather take a crap shot at iodine tablets, which can still mess you up, than deal with bacteria again.

These two gentlemen took me on the ride of my life. There is no way I could ever repay them. People go on supported rides all the time, to get their taste of the “epic” and that doesn’t even come close to what we experienced. Dan and Andy are the keepers of the flame in Melbourne and they have inspired me to keep riding, every day. All they kept saying was this was and is hardest ride they’ve ever done.

See more at Fyxomatosis. Dan and Andy, I can’t thank you enough! Until next time!