Todd from Black Cat Bicycles knows a thing or two about mountain bikes. Living in Santa Cruz provides a more than ideal testing ground for everything related to dirt. Over the years, he’s dialed in the geometry on his hardtails and recently, this process culminated in what he’s dubbed the Thunder Monkey.

A few months back, Todd emailed me asking if I wanted to review a production bike he was making. His description was right up my alley “slack and low 29r with a tight rear end.” Some time passed and this incredible frame showed up at Mellow Johnny’s to be built up with various SRAM and RockShox products.

Since then, I’ve been putting this bike through the hell that is Central Texas limestone. How does a bike designed to conquer Santa Cruz bide in Texas? Damn well. Check out more below.

We’ll break this down in an easy-to digest format. While a few “media sources” received Thunder Monkeys to review, I’d like to think we all built them a bit differently. I chose SRAM and RockShox for the parts, so let’s look at those individually, beginning with the front suspension. 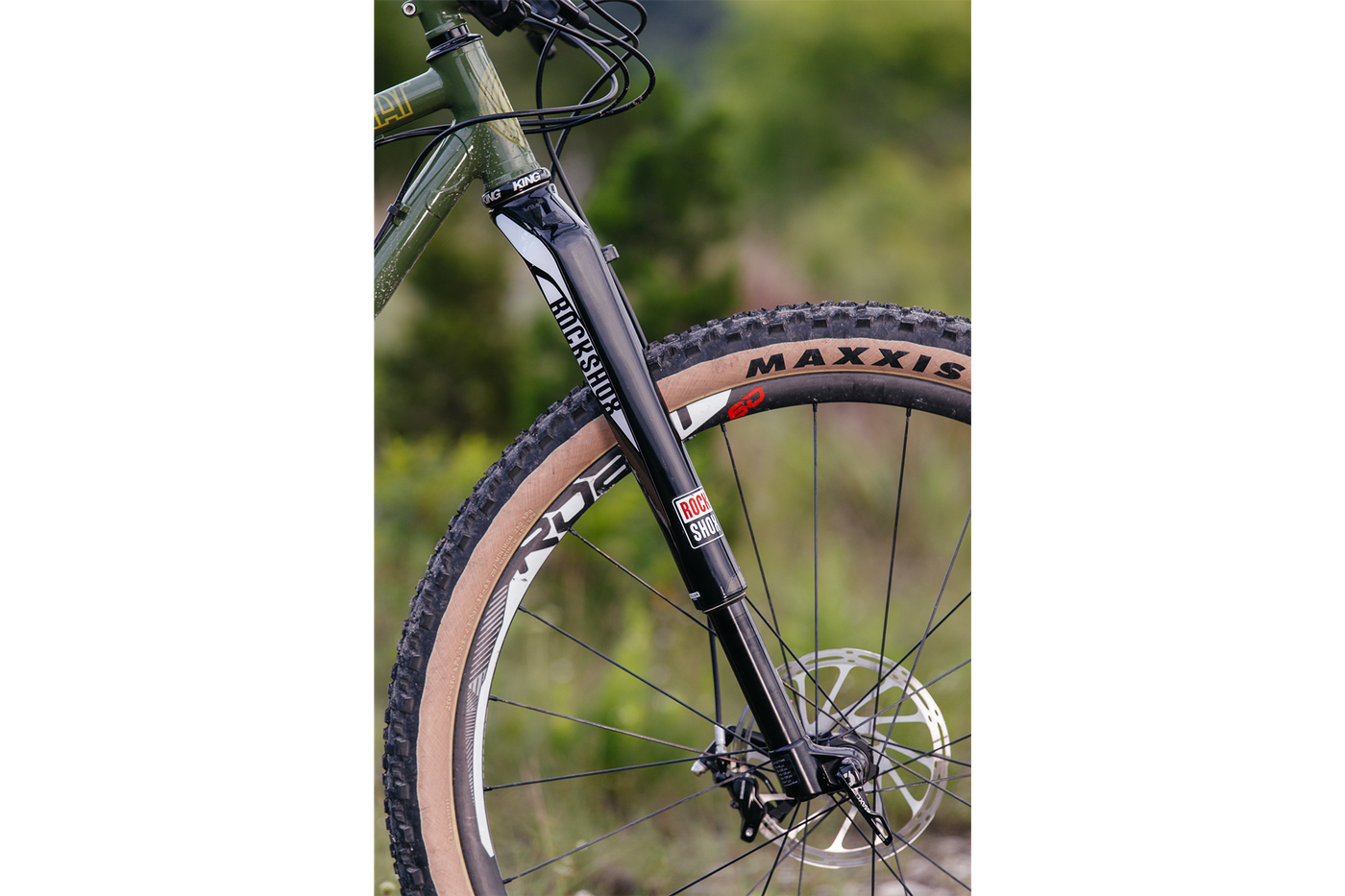 The RockShox RS-1 may appear to be just another one of the industry’s gimmicks to get your money. While it is an expensive system, especially considering that you’ve got to use their proprietary hub, the ride quality of this fork is unmatched. It’s incredibly light and nimble, yet delivers the right damping with ease. My take-away note here is that with the RS-1 fork, a lightweight steel hardtail suddenly rides more balanced. Versus, say the Pike on my Rosko, which tends to be a bit heavy on the front. Expect a more in-depth review to come. 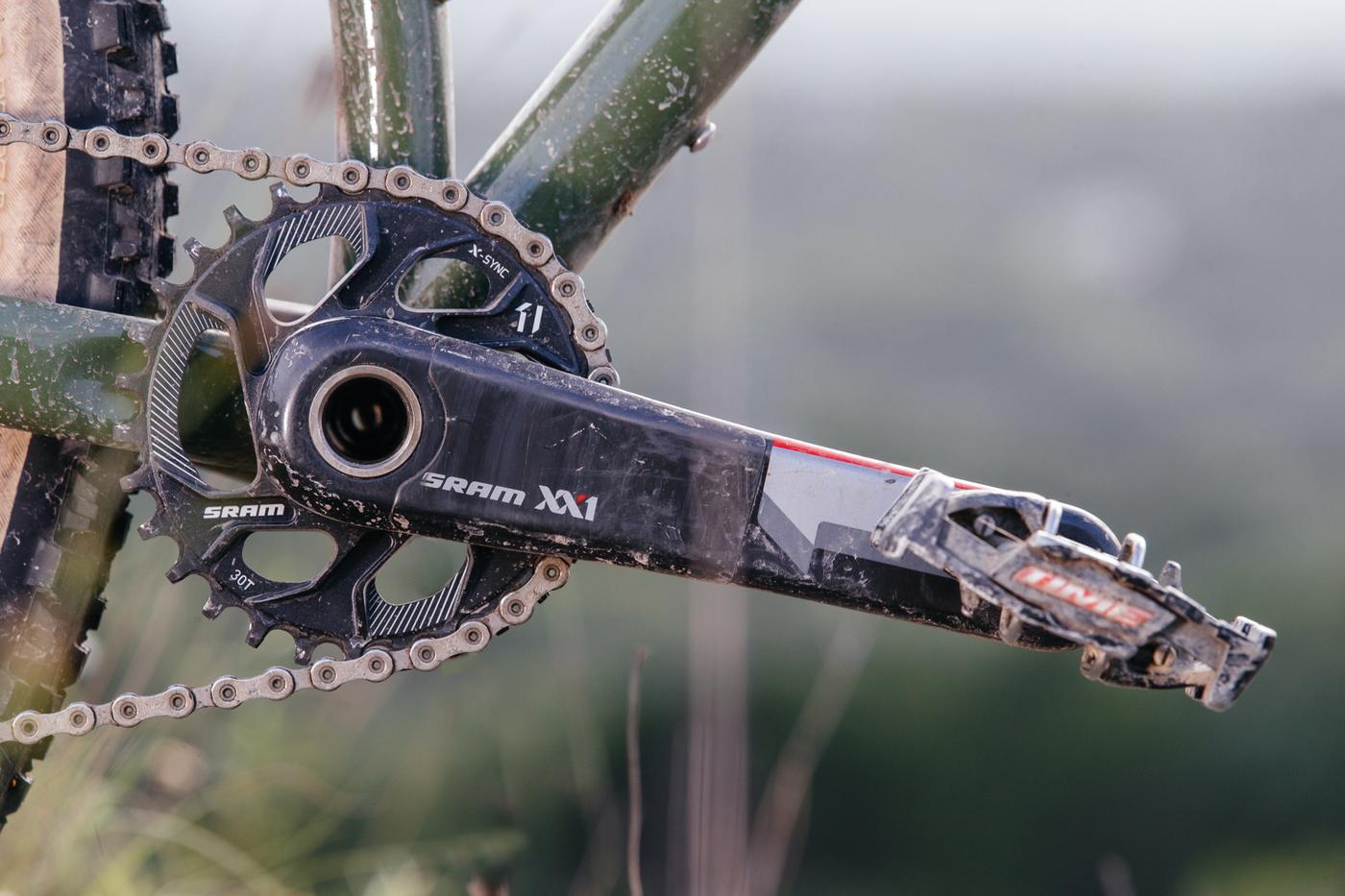 Next up, the drivetrain. Tried and true XX1 with a direct mount ring that looks clean and saves you the hassle of checking chainring bolts. Because, you know, that is such a pain. It saves weight and looks so damn clean. 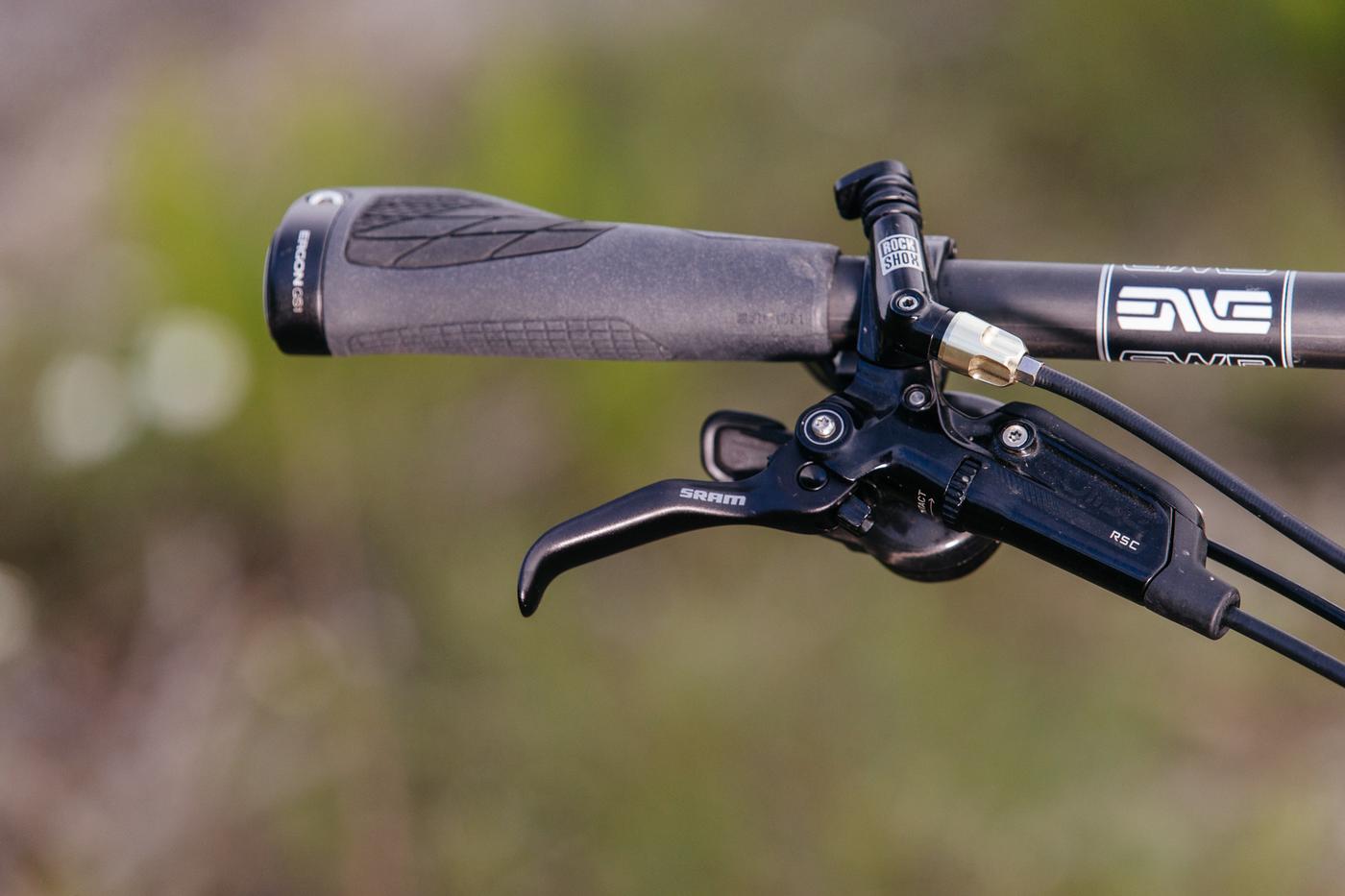 Braking on the Thunder Monkey is provided by my new favorite brakes, SRAM’s Guide RSC. Without going too far down the tech rabbit hole, I’ll just address the one question that’s on everyone’s mind “are they comparable to XTR?” In short, yes, the long-term review is on the way, but I’ll quickly add that these brakes are better than XTR’s new brakes, by far. According to my opinion anyway. 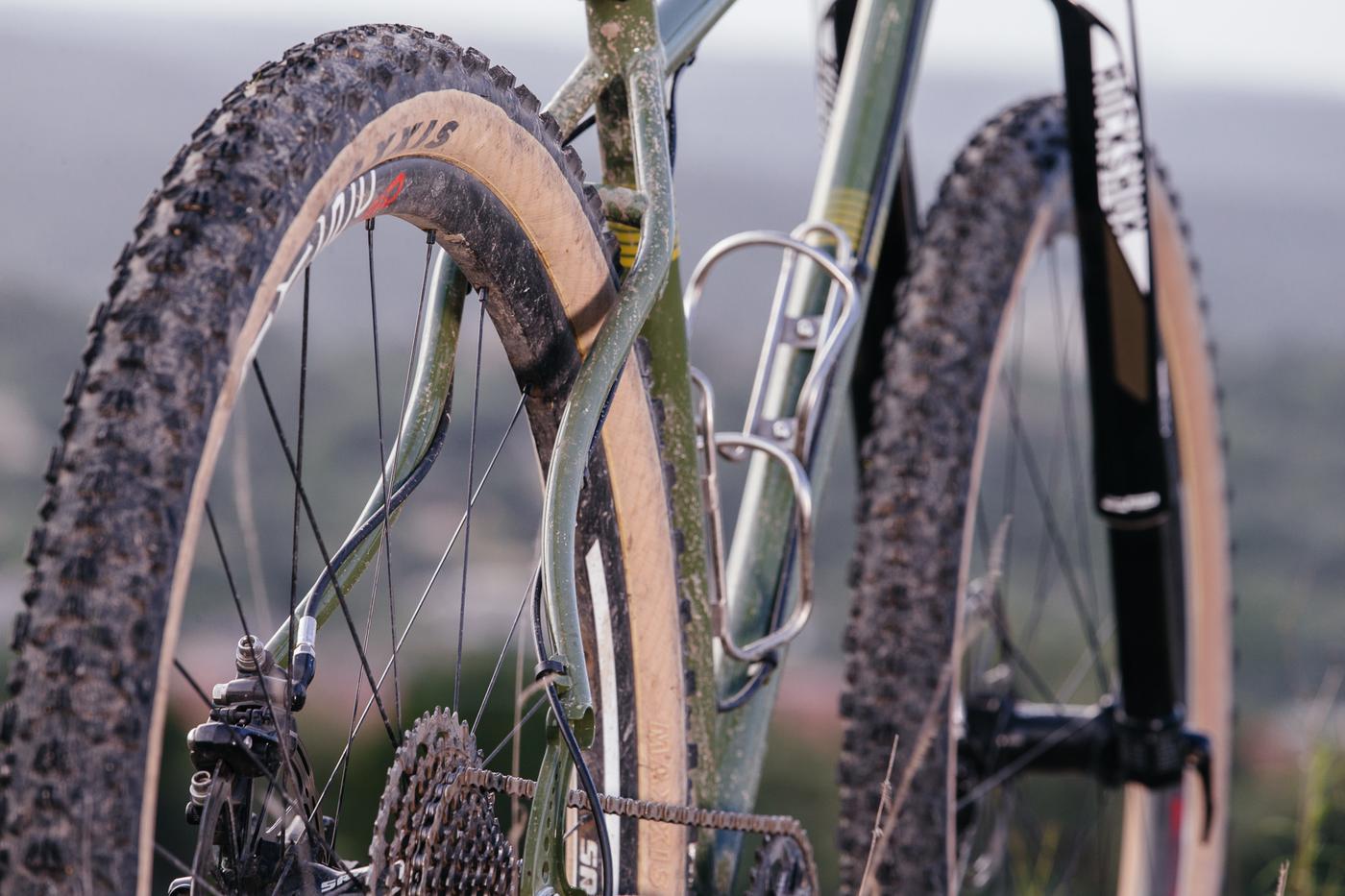 Wheels are the tried and true Roam 60’s, which I’ve expressed my love for in the past, although on the maiden voyage of the Thunder Monkey I did break a spoke which was an easy enough fix. 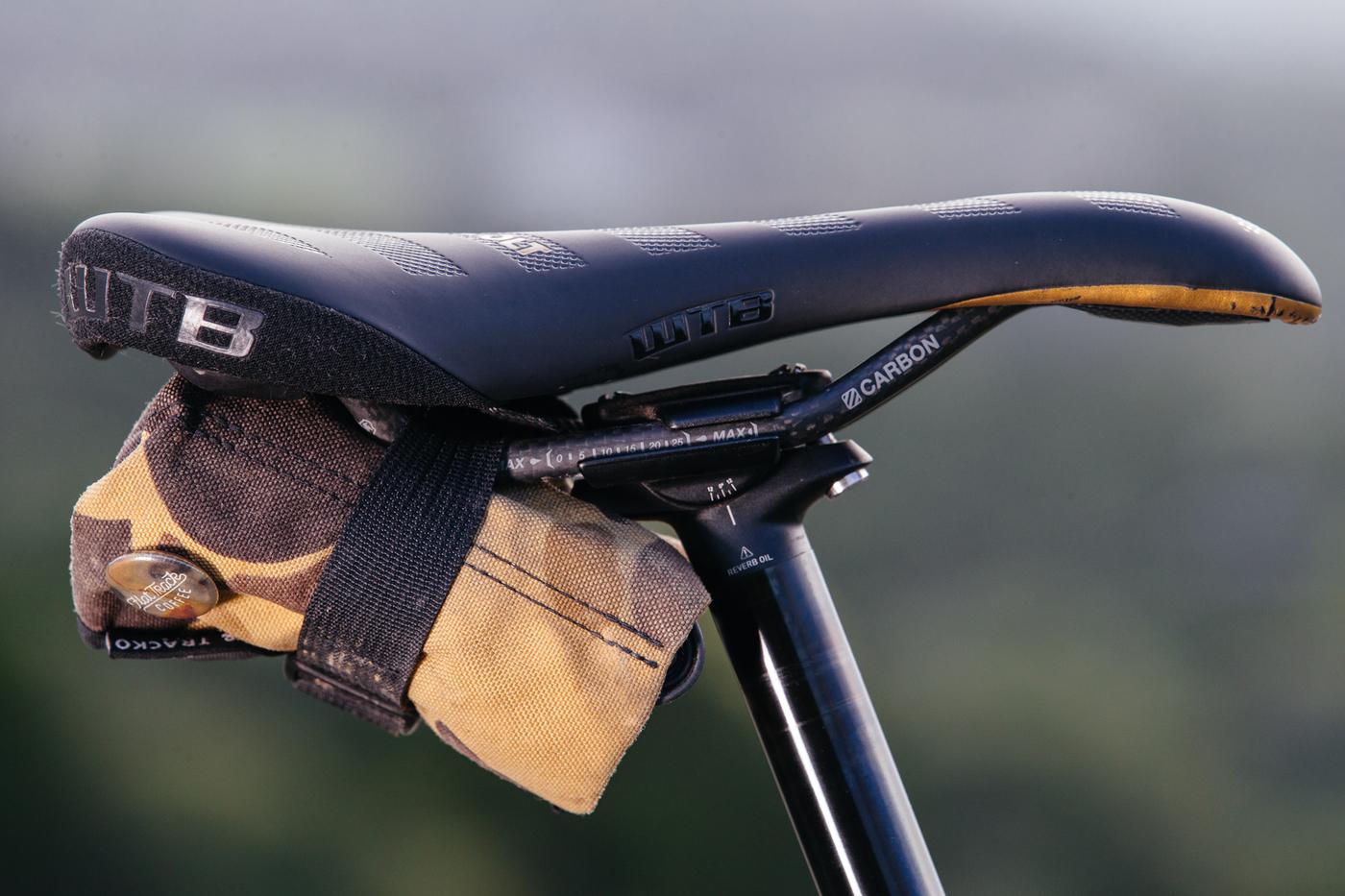 Droppin’ the post is the Reverb Stealth. I have a love/hate relationship with droppers. I love them when they’re working. Hate them when they’re not. It’s a simple fact that droppers are an ever-developing technology and kinks are always being worked out. Since RockShox moved production of the Reverbs to a “clean room” in their factory, there have been less problems. Also, I would note that this is the first Reverb I haven’t had issues with and it was from the new batch of posts. 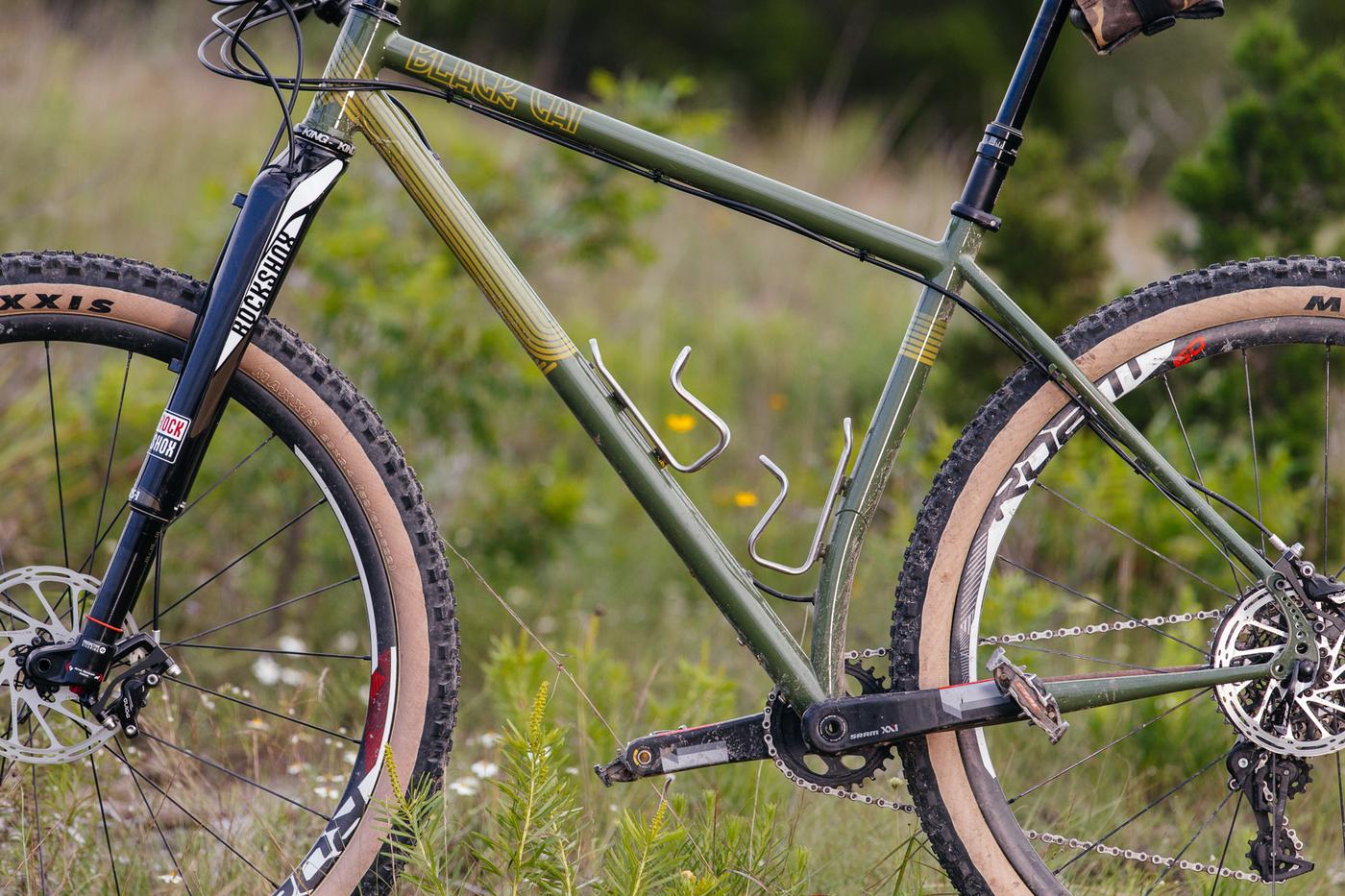 All of these components will be addressed in the future on an individual basis. What I will say is this is one of the most dialed hardtails I’ve ever ridden. Everything flows and works together like a charm. Especially on such an insane frame. 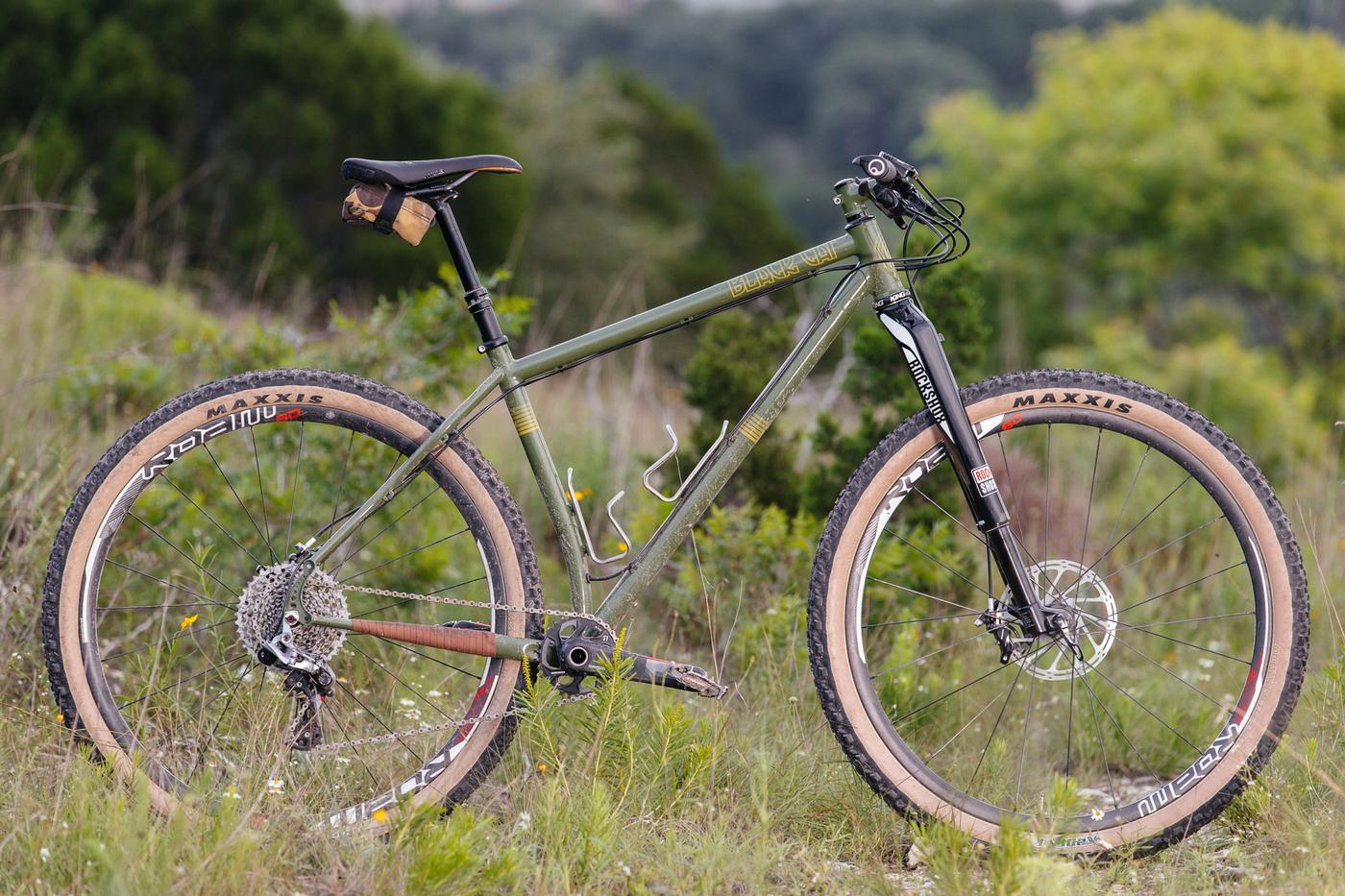 Todd’s concept with the Thunder Monkey was simple: make a hardtail that descends with confidence and climbs with agility, all while looking god damn gorgeous. Wait. Can a mountain bike be gorgeous? You tell me. 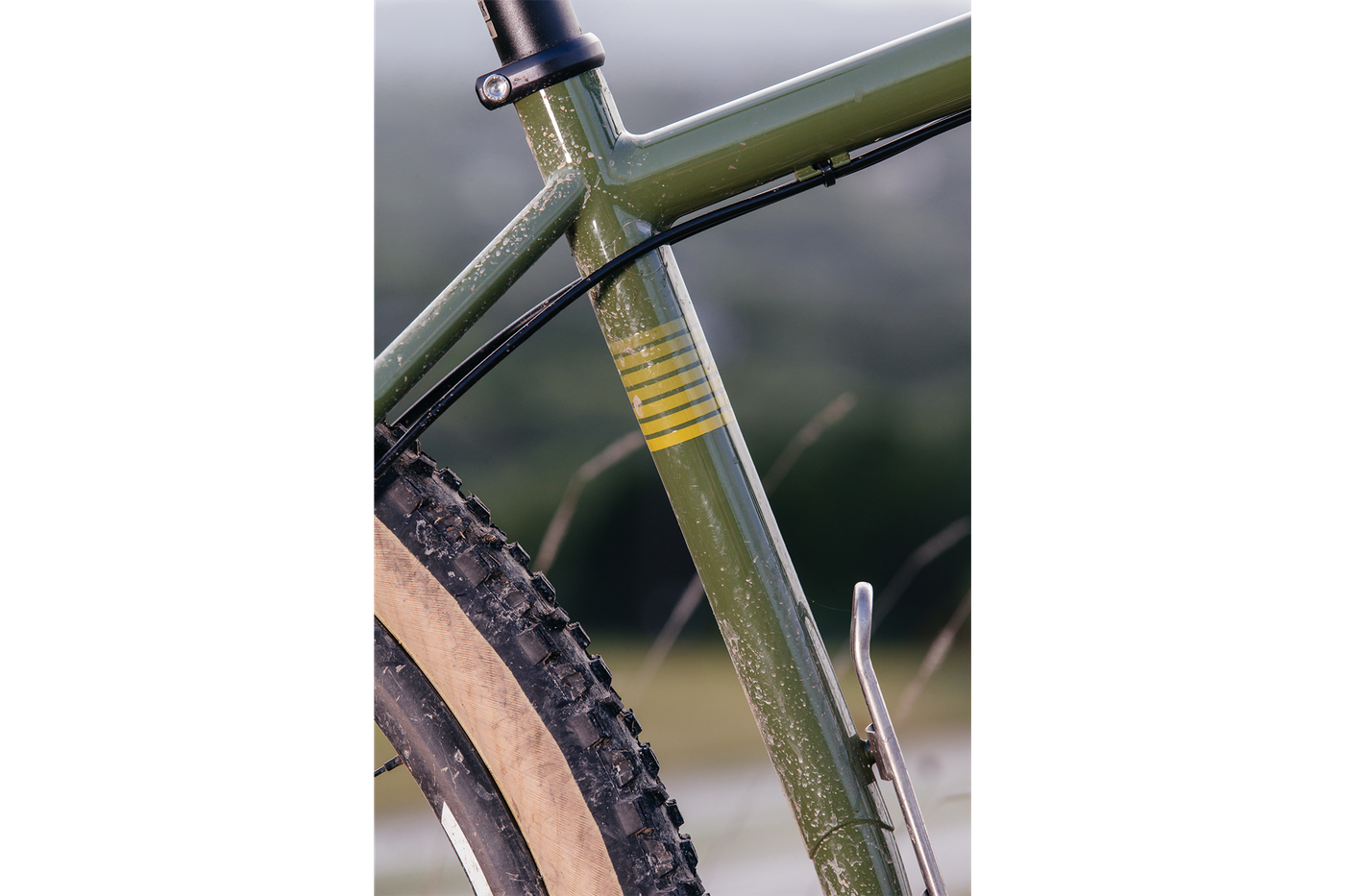 This is a fillet brazed frame and utilizes some of Todd’s sneaky signature details. The head tube gusset and sleeved, curved seat tube are the two pronounced details and his custom dropouts always get a lot of attention. I wish Todd built this bike with a thru-axle rear, because the 2.4 Ardent does rub on the stays during out-of-the-saddle “efforts.” Still, a 2.25 Ardent would fix this problem.

One of the benefits for a QR rear is the ability to pop and pump the frame, due to the “lack of stiffness.” 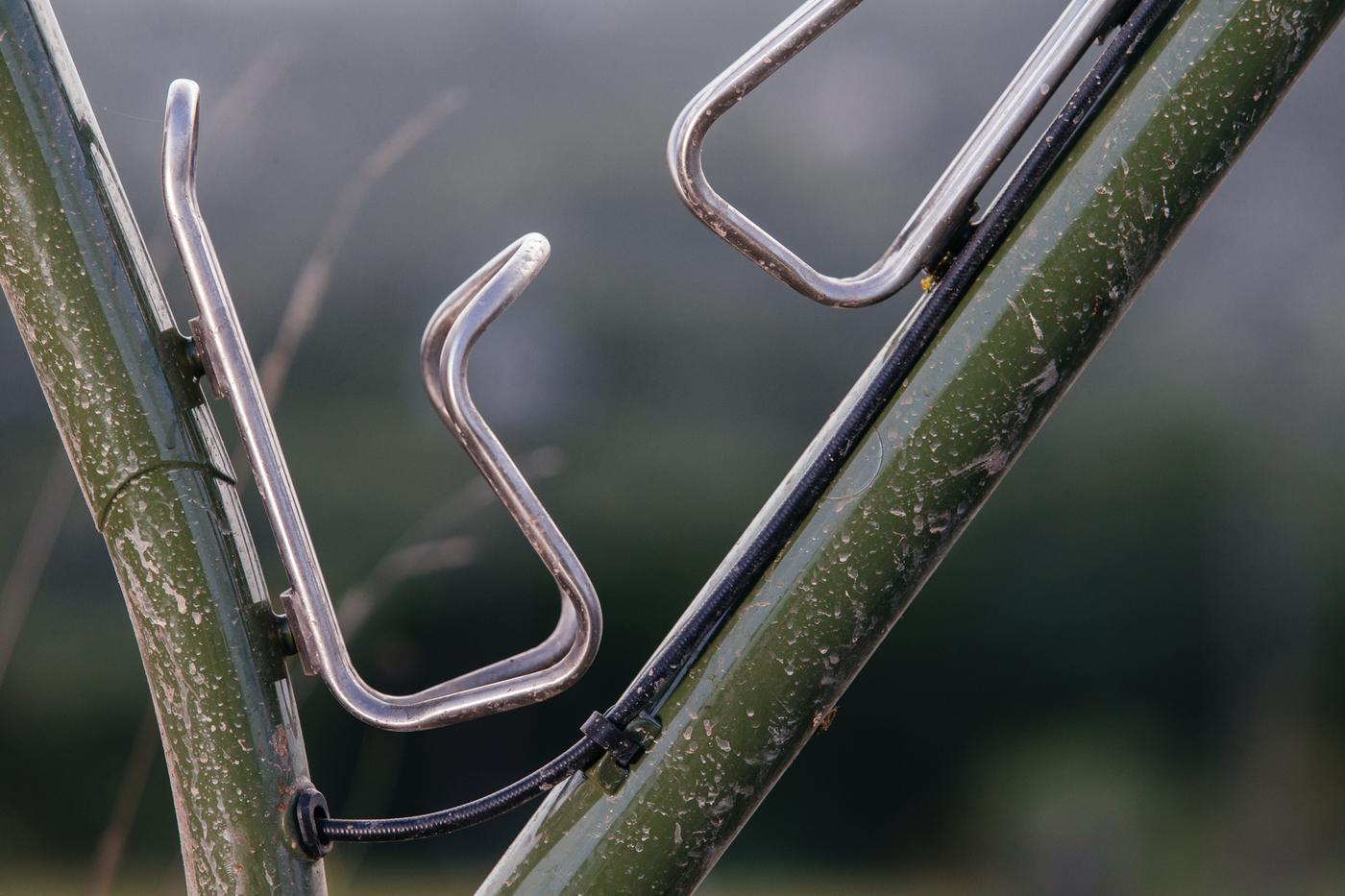 Other nifty little moments include the internal dropper routing and third bottle cage mount, in case you wanna go a bit longer with the Thunder Monkey. 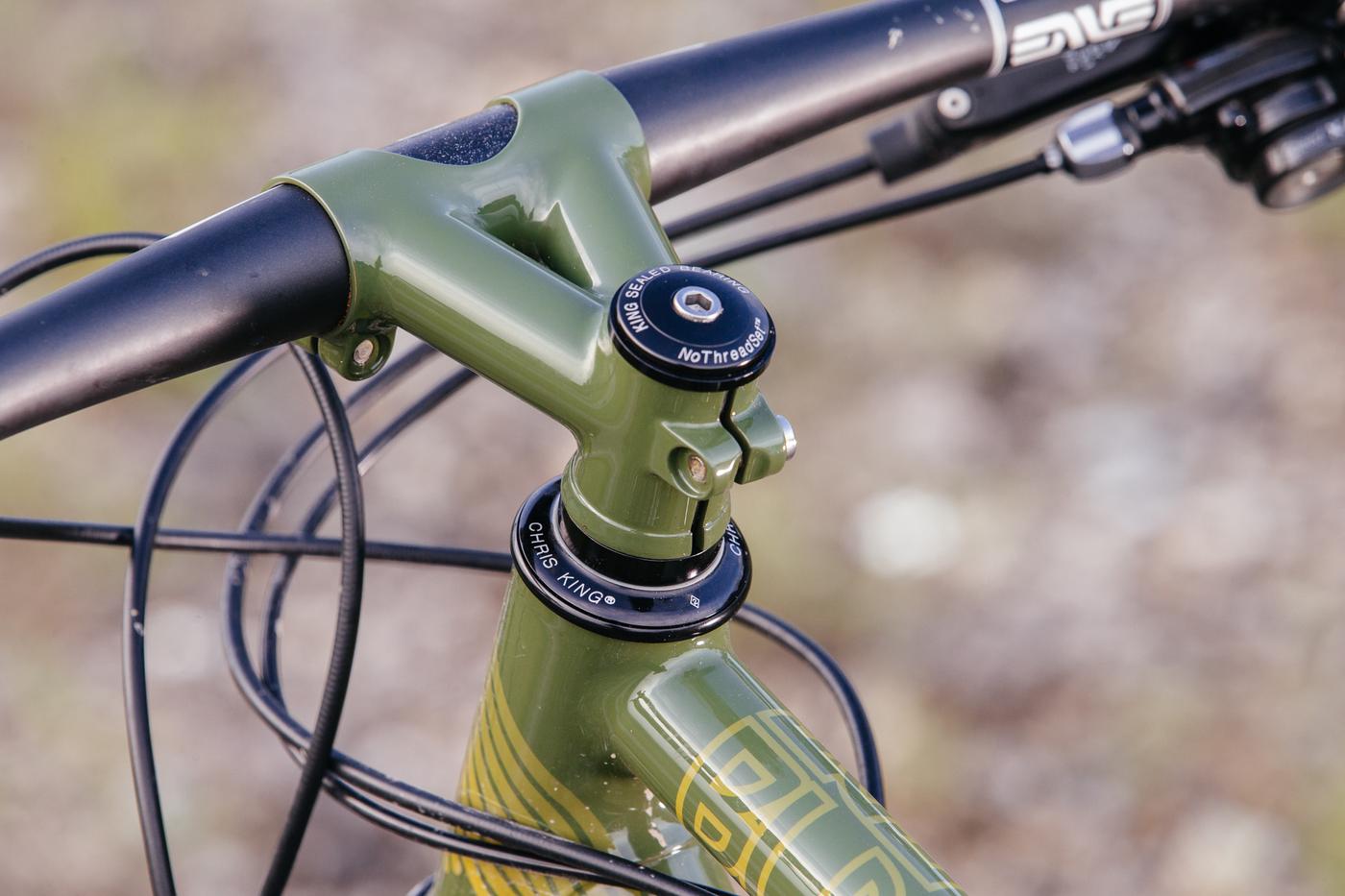 My favorite detail on this frame is the fillet bullmoose stem that fits a 31.8 MTB bar. 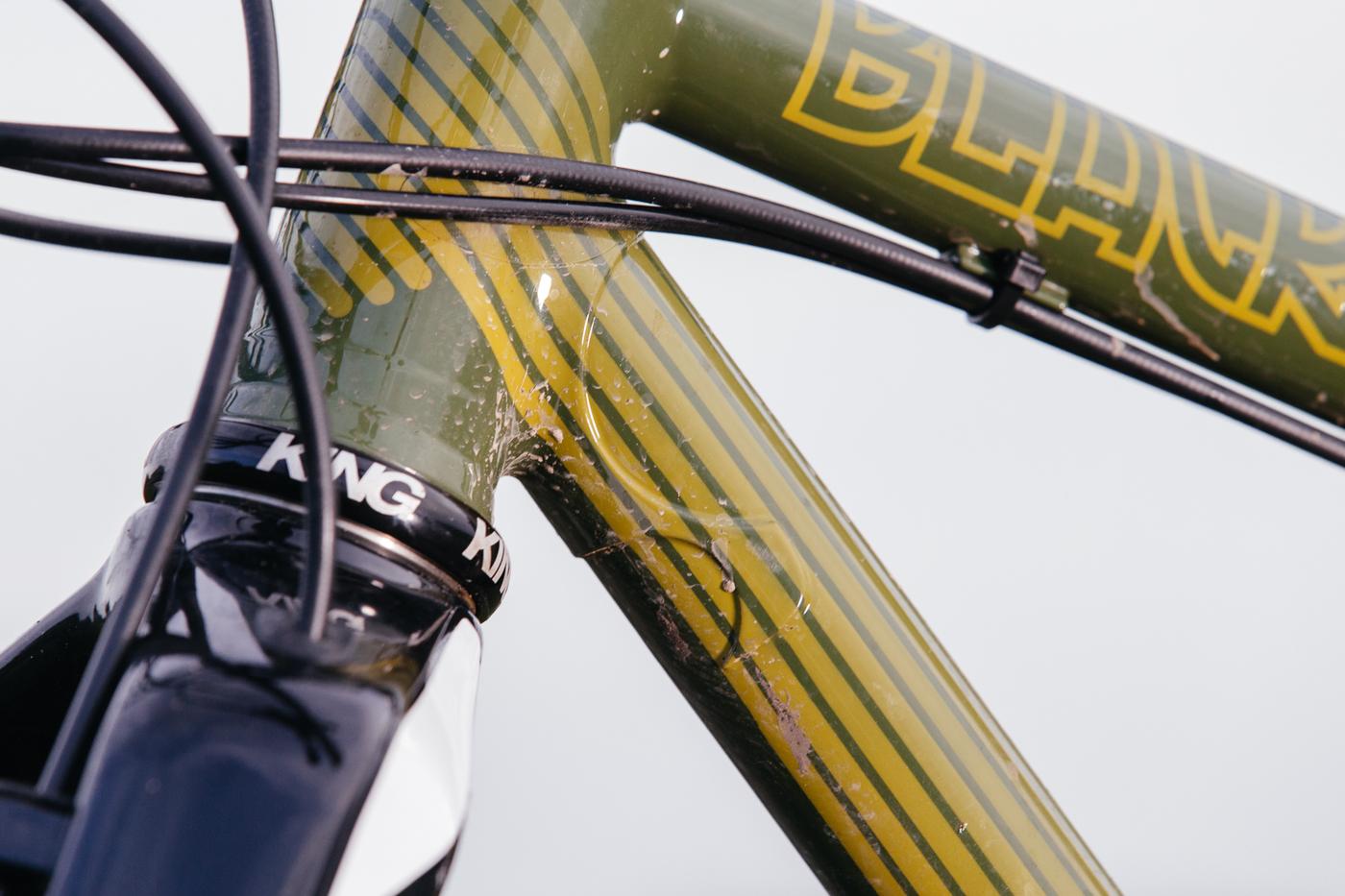 The paint was done in house by Todd, after dipping into the “special honey.” An olive base coat is accented by swooping lines that collide around each other on the 44mm head tube.

So, how’s this thing ride? Well, for starters, it’s a little shorter than what my “fit” is to be on a hardtail. Since Todd made a few of these in production sizing, it’s far from a custom fit. Yet, the intent of the Thundermonkey is uninhibited by this slightly shorter reach. 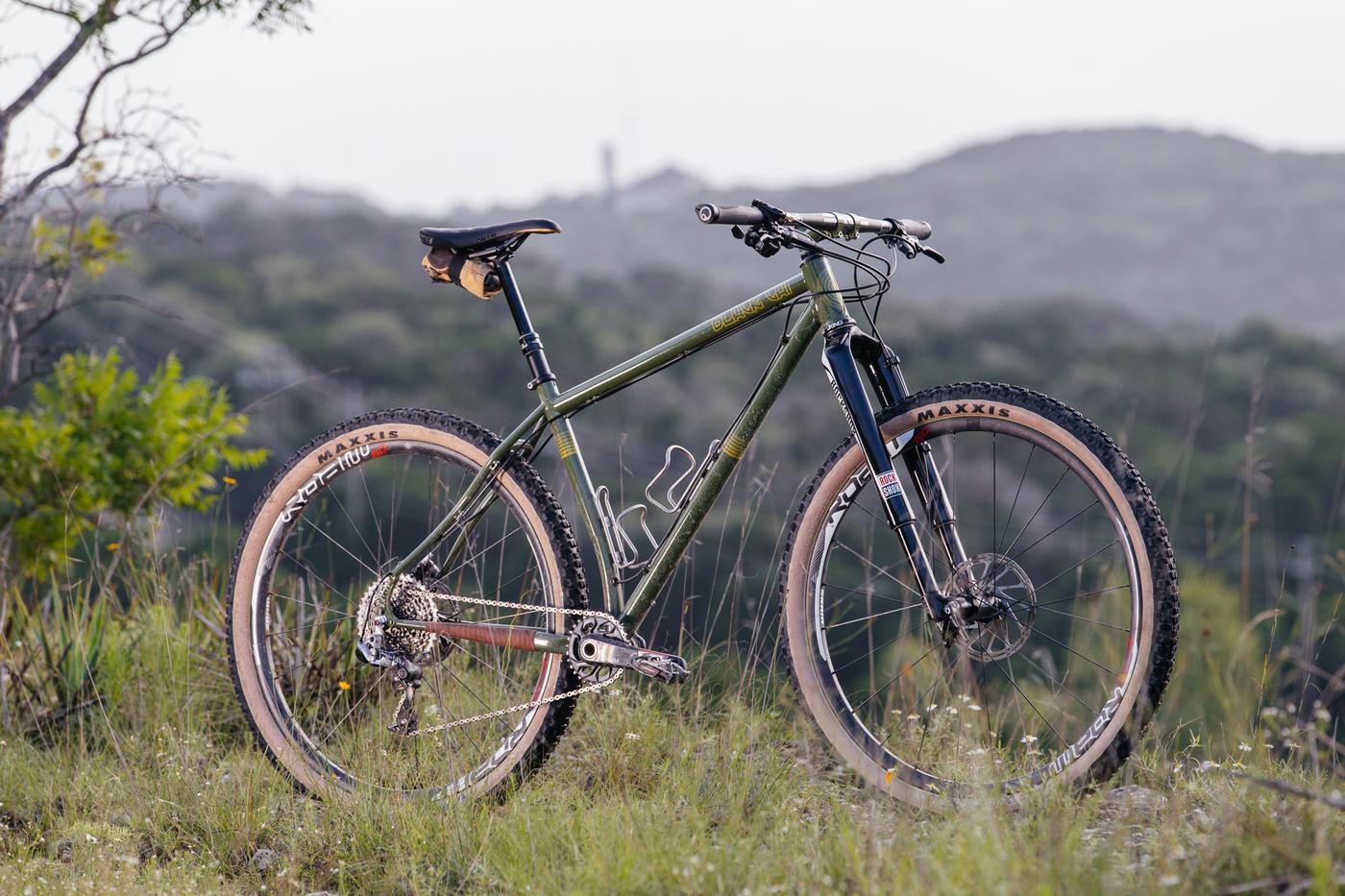 When a bike has a shorter reach with a slack (69º dude!) head tube, it enables you to drop back further over the rear hub, making it easy to get buck wild. Then, on the short and punchy climbs we have here in town, it makes it easier to get over the front hub, which is ever-so-slightly more proud than a steeper head tube would provide. The 14mm of reach deficit is a non-issue in both of these cases.

The only moment where it really sucks is the pedal out to the trail and any kind of flowy meandering singletrack. It also rules out me using the stem if I were to do any kind of bikepacking on the Thundermonkey. Again, not a custom geometry, just a by-product of a production frame. If and when the Thundermonkey goes to full on production, I’d ride the XL, versus the L.

Thunderous Monkeys belong in the woods. They belong blasting down everything from peaty, loamy redwoods to craggy and loose limestone. This is hands down one of the funnest bikes I’ve ever ridden. It’s also the most beautiful mountain bike I’ve ever had in my possession. If you wanted to go really over the top, murdering out all of the components would make it even slicker.

Todd’s work is some of the most unique in the industry and his story is something else. Hopefully I’ll get to visit him in Santa Cruz and ride the trail by his house where the Thunder Monkey was born.

If you’d like to buy this frame, holler at Todd, because it’s for sale. OR if you’d like him to build you a custom bike, send him a note at Black Cat Bicycles.

Now, I need to get a few more rides in on this beast before I send it back!