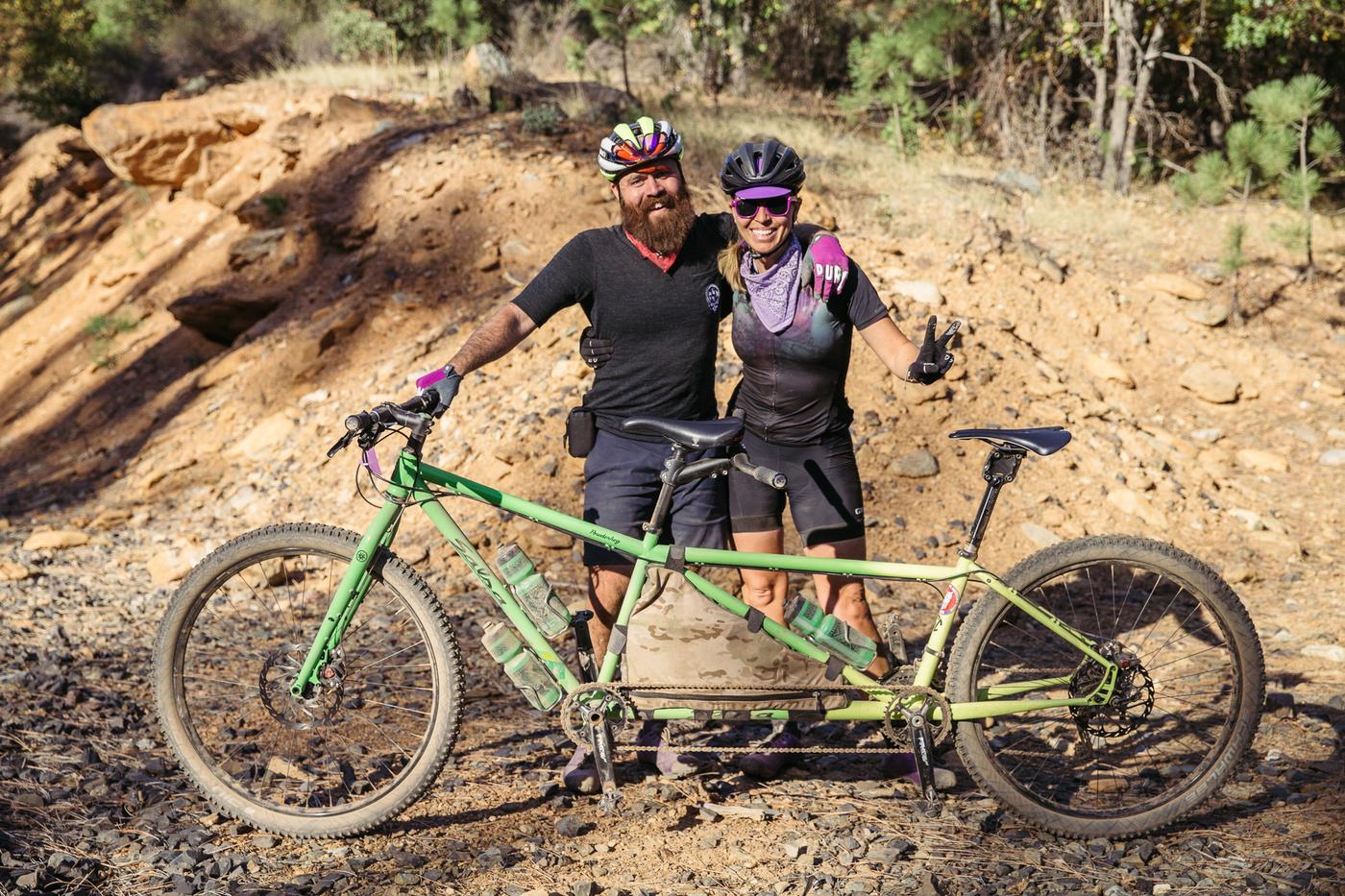 Around this time, John Watson and I were texting about bikes or shoes or helmets or girls or something, and of course Grinduro came up. I told him I didn’t think I’d be able to ride unless I found somebody to captain a tandem for me. He immediately sent a photo of Kyle and said “Kyle will do it with you!” Clearly the guys were in a bar, and I didn’t really take the alcohol-induced acceptance of tandem captain duty seriously.

But lo and behold, a few days later, Kyle told me Salsa was sending us a Powderkeg, and everything was game on.

That’s when it set in:
62 miles over gravel roads, pavement, and singletrack.
Over 8,000’ of elevation gain.
On a tandem.
With Kyle Kelley.
Oh man…what did I get myself into? Kyle and I have been friends for a while now, and I love the guy. But we’re very different, and I had no idea how this day was going to go down. To set the stage, I remember telling him that crashing wasn’t an option because I had to avoid reinjuring my shoulder. His reply: “I’ll keep the rubber on the ground around corners but definitely going full NASA off any sort of kicker.” Shit.

I went into the race feeling a mash-up of excitement, serious apprehension, and fear. I even tried to back out the day before the race.

But you know what? I had one of the best damn days on the bike. Ever.

It didn’t start that easily though!

I’m pretty Type A when it comes to racing, and I try to have everything dialed leading up to an event. Since Kyle was the captain and actually had possession of the bike, I figured he’d do the same. As it turns out, Kyle runs a very different program. Basically, within the first 20 minutes of the race, all that could go wrong pretty much did.

Allow me to elaborate: We agreed to meet 10 minutes before the race to make final adjustments to the bike. Kyle didn’t show up until after the National Anthem had played and the race had already started, leaving me standing there alone wondering where the hell my captain was. When he finally appeared, he looked a bit disheveled and said something along the lines of, “What the hell is happening right now? Time is moving so fast.” Great. We started chasing down the group, my saddle was about 2-inches too low, and I noticed the bike felt squishy. Kyle said he forgot to put air in the tires, and that he also forgot a pump. Awesome. Next I tried to grab a drink of water, but the bottles were empty. He forgot that too. Seriously? Then to top it all off, Kyle realized his pedal was broken, and he was totally unable to clip-in. KYLE!

We were less than three miles into the race and stopped on the side of the road.

Admittedly, at that point, I was pretty over it. I told Kyle we were doomed and that we should ride back to camp and open a beer. Or a few.

But that’s when it ended up being really awesome to be in this together. Because you know what Kyle gave me at that point? Perspective.

If you know Kyle, you know he’s an amazing dude who is full of stoke and positive vibes. As we stood there on the side of the road with no real solutions on how we were going to move forward, Kyle knew one thing for sure: we were going to finish this damn thing. He told me that even if we never caught anybody else and ended up riding the whole route on our own, that we were going to have a fun time doing it. And he was right.

We starting heading back towards camp to search for a pedal, but ended up running into a crew of our friends who started even later than we did. After giving us the appropriate amount of shit for having so many issues, that group saved us. Kyle managed to get a spare pedal (thanks Jen!), we adjusted our bike, borrowed a pump, filled our bottles, and off we went. Finally.

From there, it was seriously one of the best days ever. It even made busting my shoulder totally worth it, because otherwise, we wouldn’t have done this. People keep asking me, “What was tandem Grinduro really like? Did you guys hate each other by the end of it?” No way! And that was the coolest part about doing a ride like this on a tandem. By the end of the day, we were closer than ever. Spending over eight hours within inches of another person—seriously, his back hair was all up in my face—does something special for your relationship.

I think what it comes down to is that it’s truly a shared experience, and the process of working so closely together creates a cool bond. Throughout the ride we both struggled up brutal climbs. We hooted and hollered as we flew down gravel descents. We rallied the hell out of that tandem on the singletrack. And along the way, we had some seriously great and meaningful conversation. Something about the proximity, working together, and sharing endorphins just lends itself to getting real.

Tandems get a negative rep. People assume that riding one means you’ll end up in a crazy fight—they’re even dubbed divorcycles! That’s crazy talk. I freaking love tandems. My boyfriend and I have one, and it’s brought some ridiculously good times together. I think everybody should try riding a tandem! My advice for stokers: find a captain you trust, tell them “I know you can ride a bike and that you don’t want to crash either, so ride as fast as you confidently can, and I won’t freak out,” then just hold on for a wild ride! Seriously, you won’t regret it.