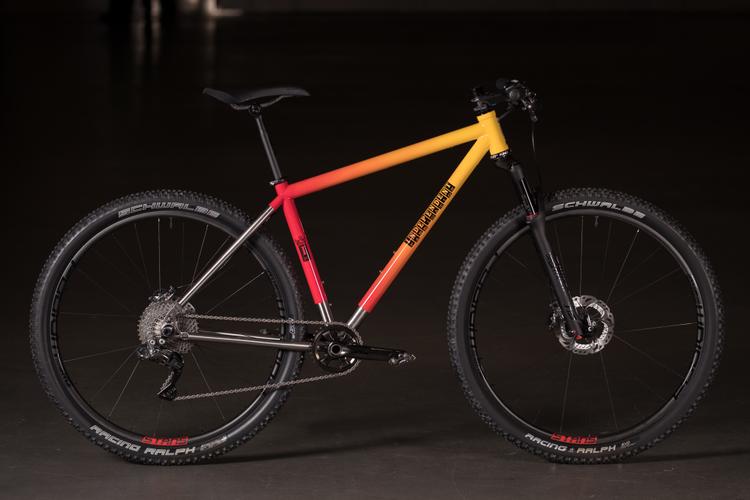 Sometimes, the simplest bikes at NAHBS are the ones that grab my attention. It doesn’t have to be shiny or flashy to motivate me to document it. In fact, I often like seeing bikes at NAHBS that don’t look like overly precious, especially when it comes to mountain bikes. This year, Indy Fab brought a handful of completes and various frames, but this hardtail really did it for me. Chris, the painter, had fun applying this fade paint job, a throwback to IF’s first bike ever. These paint jobs lived on for a while, even through the serial numbers in the 200s. For example, this “Test Bike” on the MTBR forums, built with XTR. Now, with this bike and its updated, modern components the legacy that is IF lives on. 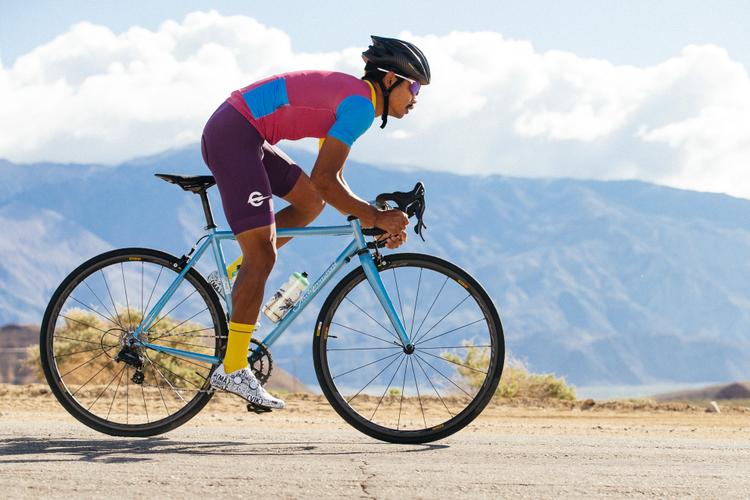 So many blue bikes as of late here on the site, but maybe that’s a sign for the bluest of blue Spring skies. In the Eastern Sierra corridor last weekend, we had some pristine weather. Minimal cloud cover with snow-capped mountains and temperatures in the 80’s. It was the perfect backdrop for a photoshoot. One of the Team Dream models, Adam, has this drool-worthy Indy Fab Crown Jewel built with Campagnolo Chorus 11, Mavic Ksyrium wheels and White Industries VBC cranks. I know this bike looks clean, but trust me, it gets ridden plenty.

I love how this bike pops against the environment and how great it looks going fast! 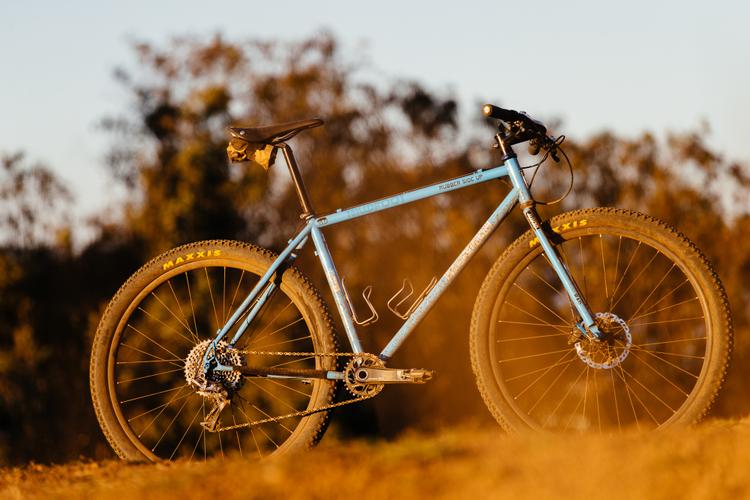 With all the Fat Chance love and rigid MTB shenanigans as of late, I thought it’d be a good time to share the current status of this bike, which has seen its share of changes since I acquired it in 2013.

For those who haven’t seen it before, the story is simple. Indy Fab wanted to build a modern Yo Eddy! with 29″ wheels, disc brakes and an original Chris Igleheart fork (who worked at Fat City Cycles back in the 80’s). The bike was part of a small run and named the Deluxe Redux. I picked mine up at NAHBS in a firesale and it’s one of those bikes that I’ll forget about for a bit, then start riding it and remember how much I love it.

This latest rendition came after I sent back the Black Cat Thunder Monkey, leaving me with an 1×11 XX1 group and its super wide gear range. Shortly afterwards I picked up a pair of the Industry Nine Velocity Blunt SS wheels and decided they’d be perfect for the Deluxe Redux. Then, I got the bright idea to put Blue Lug’s Nitto Bullmoose bars on it with a new Paul seatpost and a Brooks C15.

The thing about rigids, and hardtails in general is you want a nice, fat tire you can ride at lower pressures to ease some of the rough and rugged terrain you’ll find yourself hammering down. The Maxxis Ikon 2.35″ tires balloon out to a nice 2.5″ on the Blunt SS rims. Perfect for NorCal’s sandy singletrack. I have been very impressed with this tire choice. They’re great if you find yourself riding through a city en route to the trails…

For the past week, I’ve taken it camping and have been steadily shredding it in the Headlands, Sutro, Golden Gate Park and parts of Mt. Tam. With the rocky conditions of Austin, I always forget how much fun fast and flowy trails are. Granted, there are still a few moments where I feel like a 27.2 dropper post would come in handy, but I’m also comfortable dropping way behind the saddle to make room.

I’m not sure what it is about the bike, but since it weighs in at 23.5 lbs on the dot, I don’t have a problem keepin up with dudes on cyclocross bikes and with the bigger tires, I can blast the descents just fine. It’s snappy and with the saddle to bar drop, I don’t feel like I’m always riding upright like I do on my hardtail or full sus.

After last night’s talk with Chris Chance at Mission Workshop and hearing his comment about him being the grand dad of the segmented fork, I can really appreciate the ride quality this homage bike has delivered for the past few years. There are a few products on it that’ll get a review eventually, but if you have any questions, drop them in the comments.

Phil runs the finishing department at Indy Fab, where recently, he was able to design, build and design the paint for his newest bike. This steel Deluxe MTB, built around a Paragon Machine Works chainstay yoke. This allows builders to have clearance for a 3″ 29er tire, along with ensuring chainrings and cranks will fit the stays, using a 68mm wide bottom bracket shell.

This Deluxe is rolling on Industry Nine hubs, Stans Hugo rims with the new Bontrager Chucacabra tires. Drivetrain is Sram X01 1×11 groupset with gripshifts and the bike is very stoppy thanks to the Avid BB7s mechanical disc brakes. Those 3″ tires fit just fine in the Bontrager carbon 29r fork, and Phil painted the Bontrager seatpost to match, along with the stem.

Built for 45NRTH, the brand behind all that rad footwear and tires, this Indy Fab Chubby D-Lux will be getting broken in at the Polartec Winter Fatbike Series. I really want to see how this frameset builds up. For now, we’ll just have to ogle the frameset photos at the IF Blog.

Themed bikes are usually hit or miss, but I think Indy Fab nailed this one:

“Our Hot Wheels inspired pursuit track bike is currently on display at SEMA in the Toy Store-themed PPG Automotive Refinish booth. This steel frame was painted with a combination of 3 Crystallance paints from PPG’s Vibrance Collection along with a red tinted clear coat.”

There’s something inherently seductive about a painted titanium frame, especially when it’s painted black, with matching ENVE components. Head over to the Kinoko Cycles Flickr to see more and remember, if you’re in London, Kinoko is the place to go for America metal!

… this Igleheart segmented fork really makes this IF Steel Disc Planet X something special. Check out more at the IF Blog.

I’ve known Brett Clever since his days at NYC Velo back when I lived in Brooklyn. Since then, he’s moved out to California like so many New Yorkers in search of sunny weather and mountains. While he helps out with Ritte, Brett also runs a small water bottle / jersey company under his guise DJ Clever.

Bumping into him and Ben at Stage 08 of the Amgen Tour of California was not that big of a surprise, those Ritttayyyyy boyz are everywhere at once it seems. But seeing Brett on his Indy Fab SSR Rapha edition totally caught me off guard. I’ve always loved these bikes.

The build it pretty straight forward, minus the custom MMFG bars, which really tie the build together.

At this point in the MTB game, probably one of the greatest inventions in the past few years has been the narrow wide chainring. Sure, there was a patent from a century ago, that called out a similar design but at a much larger scale but it was SRAM who first applied that technology to the cycling industry.

Later, companies like Wolf Tooth and Race Face adopted the narrow wide ring design, making it applicable to a wider platform. Basically, any system can use this ring design and work.

Winning best finish at NAHBS seemed to be a shoe-in for Indy Fab at this year’s NAHBS. Especially when PPG gave them access to their newest color: Sun Kissed Orange. I posted the most obscure photo, because you’ve really gotta go over to IF’s Blog to see the photos NotStock Photography  took in the woods outside their New Hampshire shop!

This is a great photo and there are many more at Ichicoblog’s Flickr. Also, much love for the White Industries VBC cranks. Those are the best! 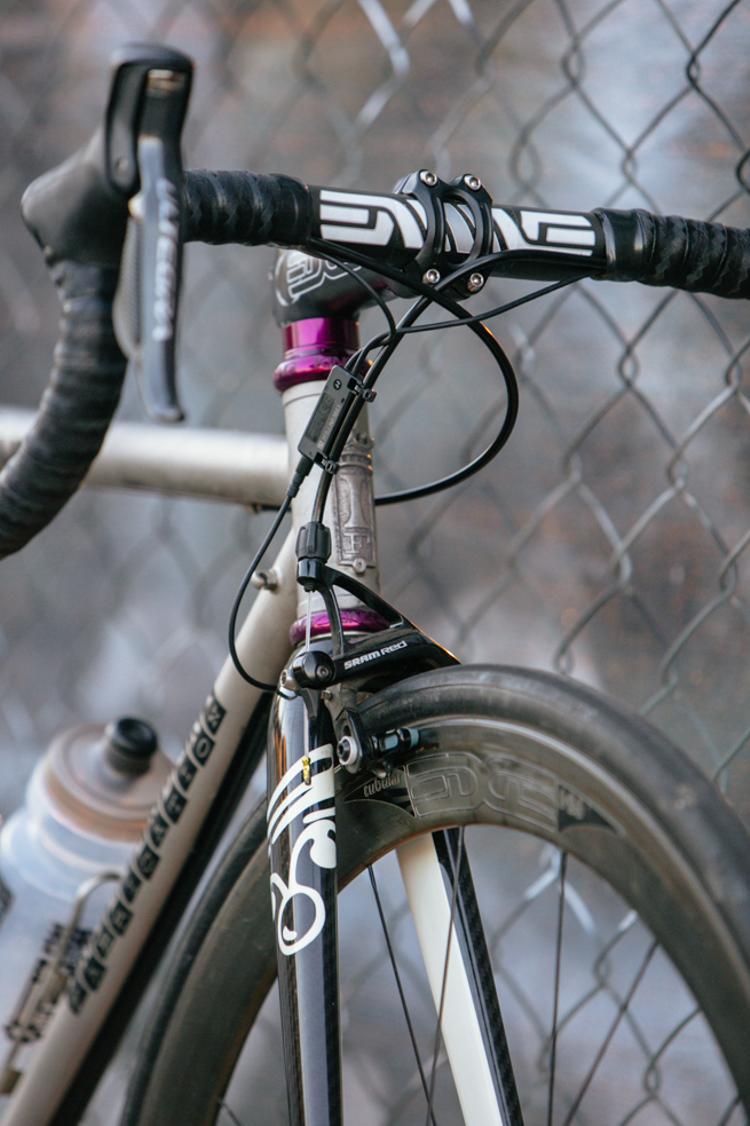 When I first saw this bike at Golden Saddle Cyclery, I was drawn like a moth to a flame by the purple Chris King parts complimented by the matte titanium finish. This Independent Fabrication Crown Jewel is one sleek road bike but it’s not without little build nuances.

SRAM Force cranks, Red brakes, Ultegra Di2 derailleurs, Ultegra shifters and ENVE wheels. There’s something about electronic shifting on a bike that pre-dates the technology that some would find maddening with all the wiring, but personally, I like it. Especially when the bike is easy on the eyes!

See more photos in the Gallery!

I really enjoy videos like this, mostly because they offer up a unique perspective into what it means to be truly “handmade in the USA”. This round, it’s Indy Fab! 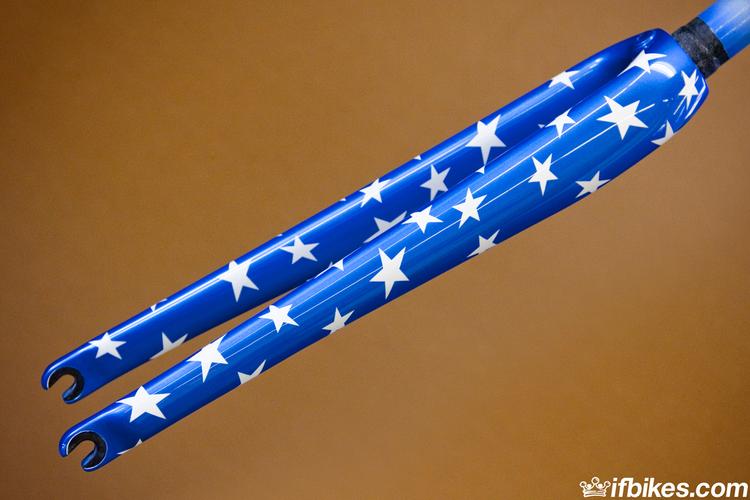 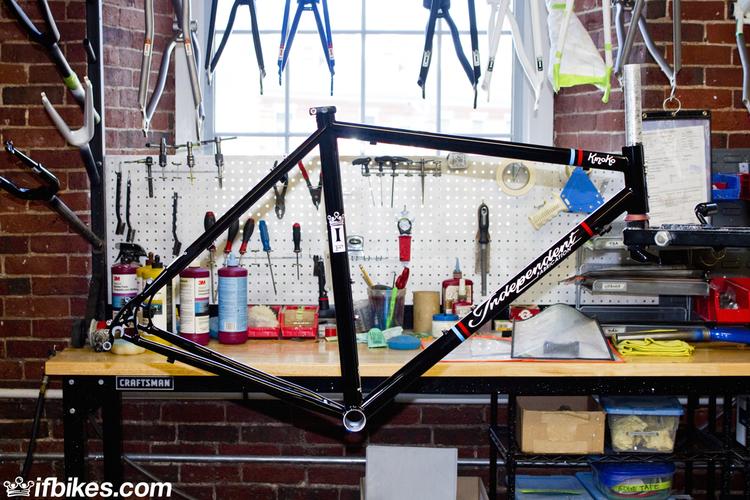 I knew that Tokyo Fixed was going through some concepts for a re-brand, but it wasn’t until seeing this post on the Independent Fabrication blog that I had heard anything concrete. Kinoko Cycles is the new Tokyo Fixed and while they’ll still obviously specialize in track and fixed gears, they’re opening up to high-end road as well. The way I see it, the more bikes, the merrier. See more of this Kinoko Cycles x IF Gravel Royale at the IF Blog.