That’s what’s painted on the top tube of Barry’s Stinner disc all-road frame. Roughly translating to “we must always suffer,” this saying acts as not only a motivation for Barry on rides, but as a reminder as to what cycling means to him in relation to life. Nothing good comes easy.

Barry‘s an illustrator, a typographer, a graphic designer and in Los Angeles, that means freelance. It takes a certain soul to be a freelancer in LA. You’ve got to hustle, be on your game at all times and yes, sometimes suffer the ups and downs of the creative economy. That means some weeks, months, years, you’re on your game and others you’re not. It all takes sacrifice.

Road technology, with regards to custom framebuilders, often flattens out and begins to form into a mesh of nuances, or details. Case in point is this new Talbot Dalsnibba road. Di2 is by no means new tech, yet the mixture of the rear brake placement, ISP, wishbone stay and sleeved lugwork makes me really want to comb this bike over, piece by piece with a camera. Luckily, photographer Phil Rooney has already done that. To see the rest of Phil’s photos, head to the Talbot Frameworks gallery.

Oh and the color ain’t bad either!

This is too wild. A company called Talbot Frameworks routed Di2 through the paint and the result is a R2D2 looking road machine called the Dalsnibba. See more at Talbot. 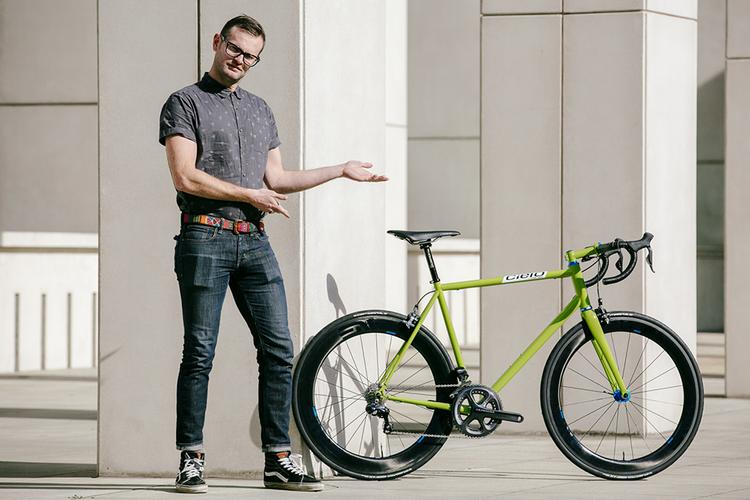 Kyle from Chris King is always peddling the latest from Cielo and Chris King. With good reason too. Made in the same facilities as their brightly-colored, or murdered out Sotte Voce headsets, these bikes bear the same precision as the rest of the Chris King line.

The newest model in their road line, the Ultegra Di2 Road Racer is a full-on production model – meaning from the time you place your order, till it arrives at your front door, you’re looking at 60 days. Maybe 61. But still.

One reason I’m so stoked on these bikes is that any Chris King dealer can carry the frames. That means – nudge, nudge – any shop employee with a Chris King account can order one. Retail price is $2,495 for the frame, fork, I8 headset and add $300 for the matching stem. Cielo’s Road Racer frameset is also available as a standard “cabled” option. Remember, there are always Stem options too…

This bike in particular came in around 16 lbs. It might be less than that, but I don’t want Kyle wacking my knuckles with a straight edge if I’m wrong… See more of this chartreuse beauty in the Gallery! I took extra time with this one… 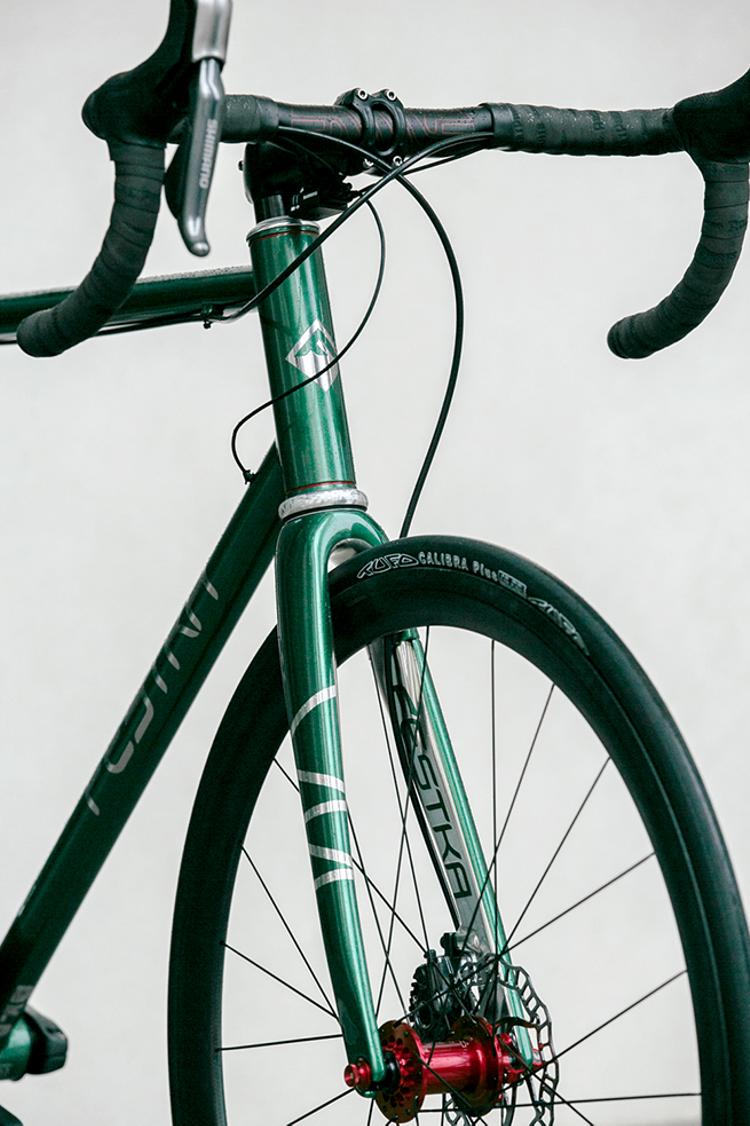 One of my favorite builders this year at NAHBS were the Czech builders Festka. Their work with oversized Ti and stainless tubing is impeccable. While most of their paint jobs are pretty over the top, this Union Jack Di2 disc road was actually pretty subdued.

Built for Richard Hardy, this particular frame was constructed from Columbus XCR tubing and sported a British racing green coat of wet paint, overlaid with a pattern inspired by the Union Jack flag of the UK.

When people asked me what the overall theme of NAHBS was this year, my reply has been: Di2 and disc brakes. Staying true to that observation, Richard’s bike is equipped and ready to rip. The addition of Rocket Wheels and Tune hubs gave this bike some European flavor amongst the sea of Chris King and Enve.

Remember, if you are interested in carrying Festka, or ordering one for yourself, contact Cycleast in Austin, TX. 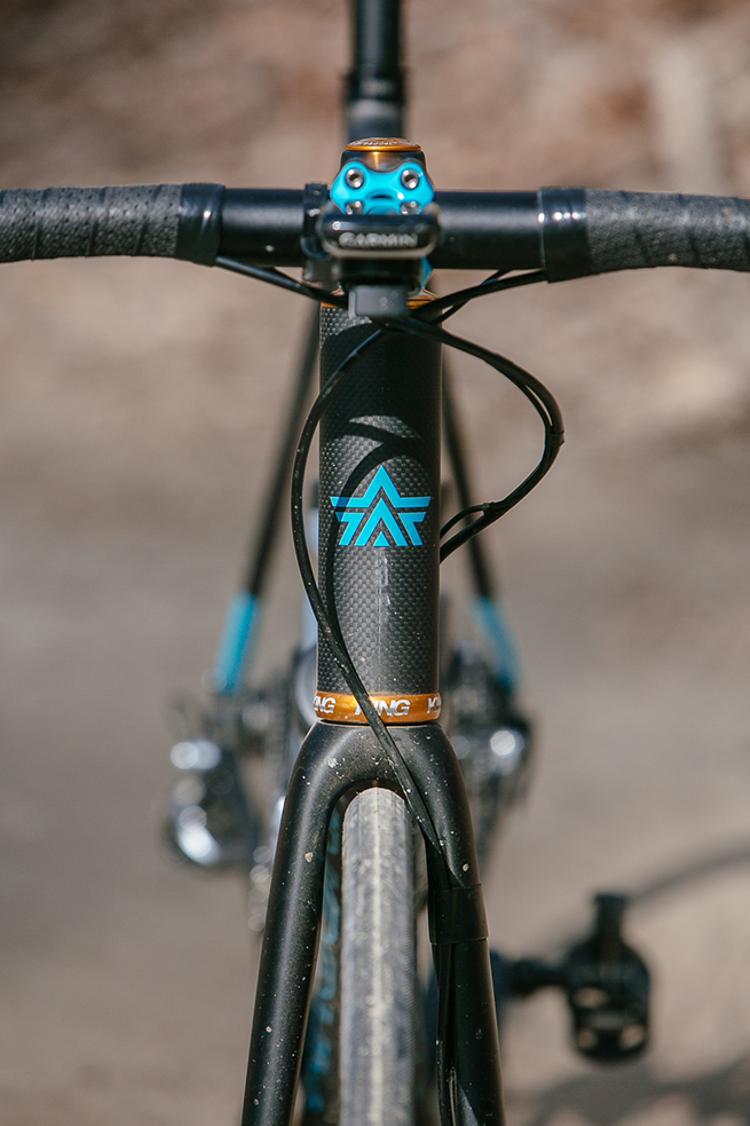 When Ben from Argonaut Cycles designed and developed his first road frame, he was content, but that didn’t mean his desire to create the best made in the USA carbon fiber road frame was sated. Ben knew the market was changing and wanted to have even more options for his customers to select when purchasing a custom bike.

With the popularity of gravel / dirt rides and races, he knew that his current racing geometry would need some finessing and with the increasing demand for disc brakes, the opportunity arose to adapt.

A bike suited for off-road riding has a few tweaks to the geometry. The rear end will be slightly longer, the bottom bracket, just slightly lower and the head tube loses around half a degree. This enables the bike to still handle fast on sealed roads, but really be at home on dirt. Tire clearances are important as well. These bikes fit a 28mm tubeless road tire with ease, which is all you need for gravel. Remember, this isn’t a cross bike.

The Argonaut Disc Road bikes that the Rapha / River City Bicycles team rode during the Rouge Roubaix were developed for off-road conditions, while staying true to their race machine pedigree.

For those familiar with the Di2 hydro system, you’ll note the front plate of the shifters were painted black. Other than that, it’s pretty straight forward. 140mm disc rotors, Argonaut Made in the USA frameset, ENVE bars, ENVE stem, ENVE wheels with custom decals and dripping with Chris King’s precision components.

Tim from the team has the first production model. After an afternoon of shooting photos and video of the bike in action, I took it out for some portrait photos.

This bike ripped apart the dirt and stood out from the pack at the Rouge Roubaix. See more in the Gallery! 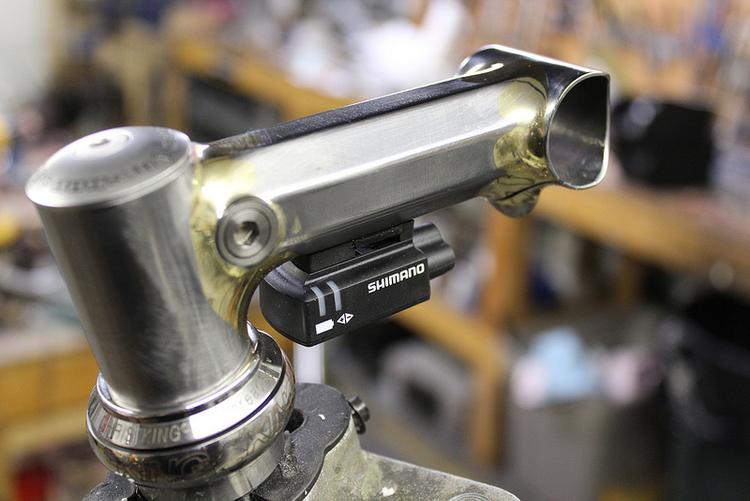 I know this isn’t entirely all that surprising but I found this photo series that Chris Bishop posted to his Flickr very interesting. This is for a Di2 disc bike. It’s great to see new technology integrated elegantly into a traditionally-brazed steel stem but the contrast still gets me every time!

See you this weekend Chris!