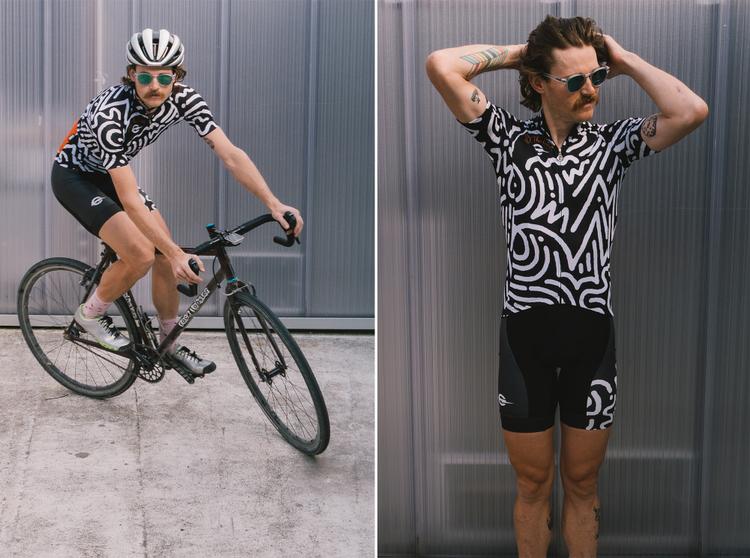 These kits look so good!

“The Squiggle Inverse Jersey. This jersey is fast, cool and micro meshy. Perfect for long days in the sun with yer pals. Designed by local Austin artist (and pal) Will Bryant, the Squiggle King. Will’s colorfully wacky and slightly irreverent designs are splashed all over our fine city. This jersey in white on black captures the core essence of his aesthetic. Check out more of Will Bryant’s work at Willbryant.com. Made by Endo in the USofA making Canadians seethe with jealousy.

Squiggle Bibs. For squiggly fast fashion & titillatingly tight tan lines. Also black, so you can pair with a rainbow assortment of yer clean jerseys when the squiggle top’s in the wash. Designed by local Austin artist (and pal) Will Bryant, the Squiggle King. Will’s colorfully wacky and slightly irreverent designs are splashed all over our fine city. This jersey in white on black captures the core essence of his aesthetic. Check out more of Will Bryant’s work at Willbryant.com. Made by Endo in America, eh? ”

Pre-order at Beat the Clock and see more photos below.

On the morning of the Summer Solstice, Beat the Clock hosted a Swift Campout in honor of the longest day of the year. We awoke to the familiar cloud cover that has come with Texas’ rainiest year on record. Swampy barely beats the scorching summer sun but beggars can’t be choosers, eh?

13 of us rolled out from Sa-Ten Coffee and Eats onto the desolate roads of central Texas towards Bastrop State Park. The protagonist of the route is Old Sayers, a 10 mile gravel road filled with rolling hills and handsome oak trees. It always feels like we’re riding into a Terrence Malick film. If the storybook setting weren’t enough, we pulled over for a nature break at a tree swing. We swung with giggles and ‘Grams.

As we arrived in Bastrop early in the afternoon, the rain gods welcomed us by opening the heavens. The remainder of the evening was spent fashioning coyote scarves, camp coffee and of course, whiskey. If all days could be spent bike camping with friends, make them days longer! 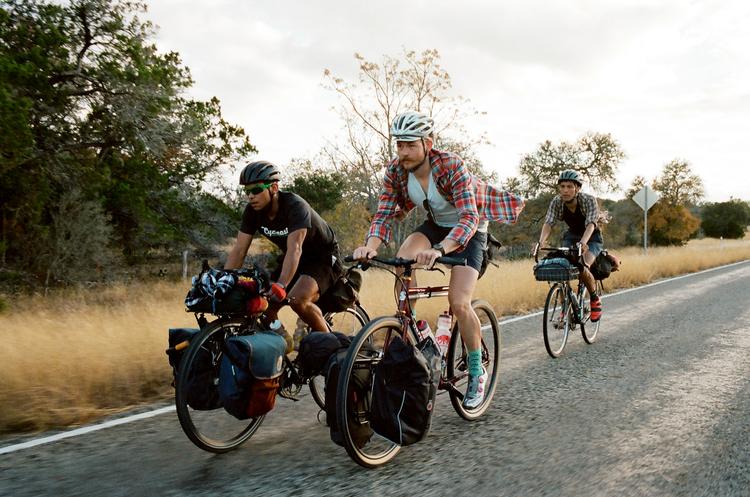 Free Fun at Urbocross
Photos and words by Gideon Tsang

Cycling is usually fun, often not free and occasionally funny.

Racing a criterium is not free, usually fun and funny only when an armadillo crosses the road during the race. (True story and a problem isolated to racing in Texas.)

A deep tissue massage is not free or fun but funny as fuck when your Kiwi masseuse tells you farting stories. (Also a true story).

Urbocross is a free and fun four week cyclocross series on the urban trails of Austin, TX thrown by Beat the Clock Cycling Club and CycleEast bike shop. The series ended last week straddling the end of our road racing season and the beginning cross season.

If you’re in Austin and want a friendly introduction to cyclocross racing, or you just wanna come out and party, check out the Beat the Clock Cycling and Cycleast Urbocross series. I’ll be there struggling to keep up with you!

Austin, Texas is my home. I know that sounds strange because I’m rarely there, but it’s true. My good friends in my cycling club are throwing a race called “UrboCross” tomorrow. You should come. I’ll be there, with my camera. Roll through, race, have fun and don’t puke on the cacti.