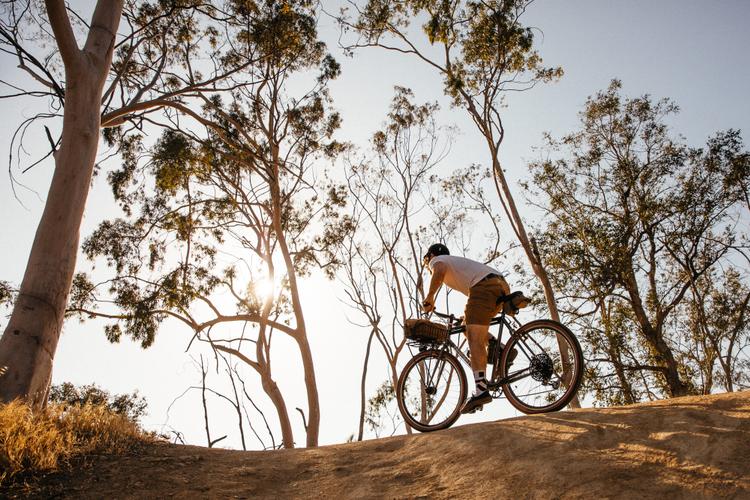 Josh Culbertson from Avery County Cycles recently completed a gorgeous 1×11 disc cross bike for a customer. Like a lot of Josh’s bikes, there’s a story behind this one. The client’s grandparents worked for and collected Viking Snowmobiles in northwestern Minnesota, so you’ll catch insignia from Viking on the bike, as well as a Viking-inspired paint job.

Made from True Temper with internal routing and painted by Jordan Low, this lightweight steel bike has a mean stance and will stop just fine in whatever conditions you throw at it. For wheels, King R45D to carbon hoops were spec’d and built by Magnetic Wheel Co. 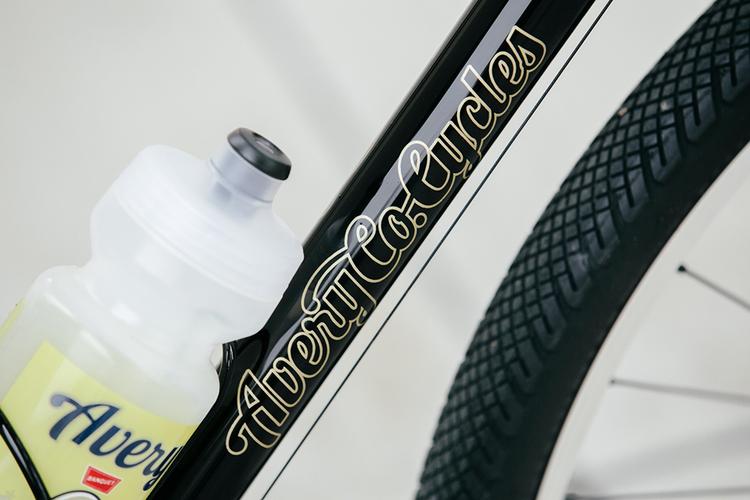 At NAHBS, themed bikes are usually hit or miss and by that I mean, people usually get it or they don’t. If you can’t see the theme in this bike, then you probably didn’t grow up on the 80’s watching reruns of Smokey and the Bandit… Or… You just don’t get it.

Josh from Avery County Cycles went way over the top with this homage bike. Built for himself, as his new touring rig, everything was thought out and executed with precision. Down to the choice in tire: Michelin’s Country Rock. The stem is custom and Josh even got Coors-themed water bottles for the show.

For the saddle, Mick Peel from Busyman hand-embossed the firebird logo from Bo Darville’s Trans Am. Other details include PAUL Racers, hand-made carbon fiber racks – with Paragon ends (Josh isn’t 100% sure the front rack is structurally sound, these were mostly for show) and the exquisite Trans Am-inspired wet paint by Jordan Low.

I can almost hear the theme song playing as I’m typing this! See more in the Gallery! 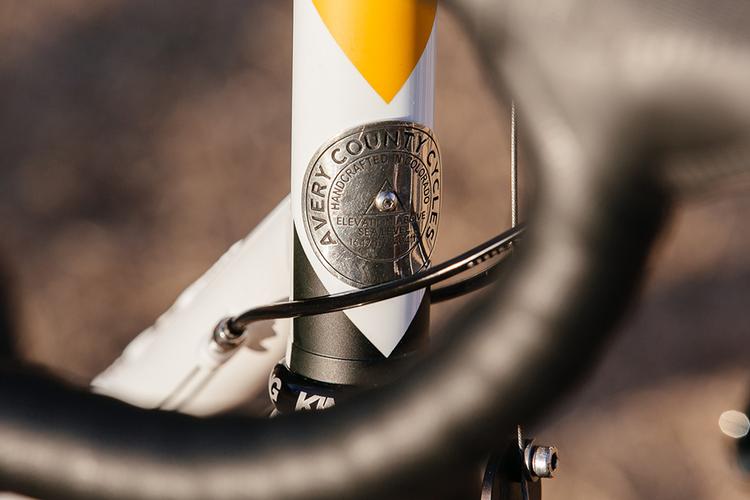 Inspired by the Audi Group B rally machines from the 80’s, this Avery County Cycles Cross bike is for Eli Cox, owner of Berkeley Supply in Denver. Josh from Avery, Eli from Berkeley Supply and Tyler from Pearl Velo make up the Tennyson Collective. They’re all good friends who have found Denver as their home.

Eli is one of the nicest guys you will ever meet, but that doesn’t mean he’s with the occasional heckling from Josh and Tyler. When he got serious about his health and wanting to ride a bike, he told Josh he wanted a cross bike with a wider gear range, that would be inspired by an Audi Rally car from the 80’s.

Josh usually does powder in-house, so for this one, he sent it off to Jordan Low, who in my opinion is killing it right now!

My dudes in Denver at Pearl Velo and Avery County Cycles are part of a project called Making ColoRADo. 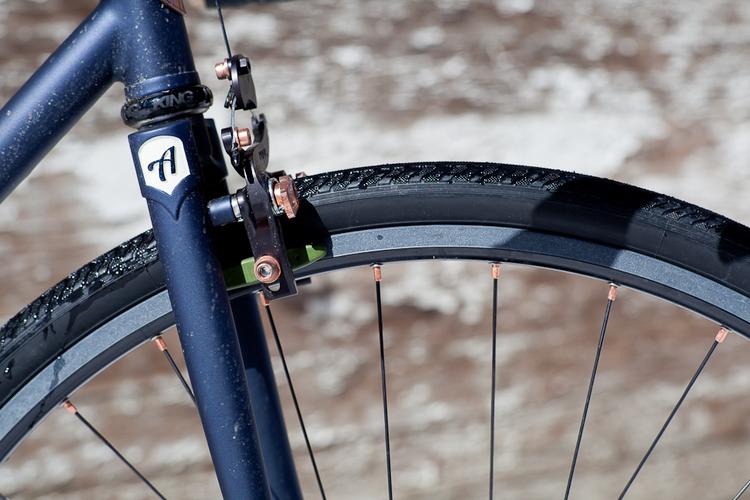 When Josh from Avery County Cycles won the rookie of the year award at this year’s NAHBS, I don’t think anyone was surprised. I for one, was not in the least bit. His self-described Colorado front-range commuter is a mixture of things. Part cross bike, part light-tourer / commuter, with a trail suitable for off-roading. He kept the rear end tight, at 405mm and a nice, even bb drop of 65mm. While there are rack provisions on the rear, Josh prefers a bit of backpack camping.

Enough about the use and geometry, this is a show bike with all the suiting accoutrement. The hardware is copper-plated, there’s a machined lamp tab on the non-drive fork, Avery “A” fork crown inlay and a ‘perty blue matte coat of paint. The color really looks great in person. In fact, this whole bike looks great in person and in photos. See for yourself in the Gallery! 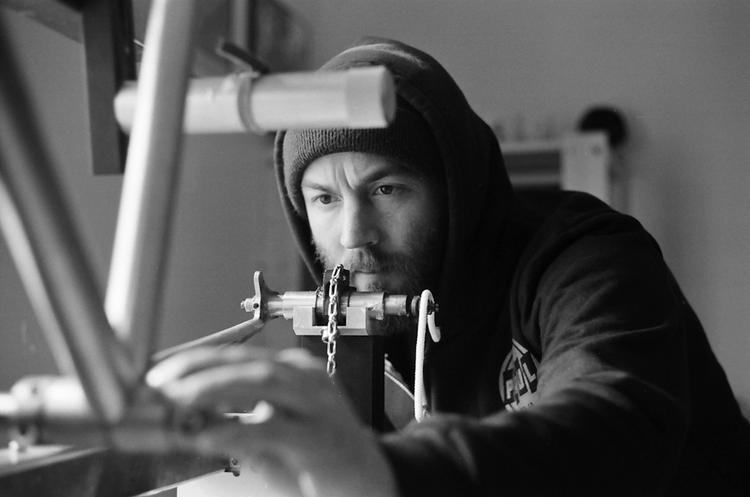 For me, the best part about NAHBS is being submerged into the host city’s community and getting to know some of the local names. I first heard of Avery County Cycles through a video that I posted about a year ago. Josh seemed like a good guy, with attainable aspirations and a love for frame building. One of the things that struck me in his interview was his commentary on “more frame builders are a good thing”. That’s a weighted statement but in Josh’s eyes, and as something I can understand, having a local framebuilder that serves the local community is important. In today’s world, everyone orders frames from all over. You simply email in your fit information and 6 months later, your bike arrives. It’s great for business and no builder would ever complain about being busy, but that statement really struck me.

In the two years Josh has been building frames, he’s been catering to his local community. Starting out with frames for friends to practice his torch skills and moving up to a full fleet of single speed cross bikes for Pearl Velo. His space sits next to Berkeley Supply Co and Pearl Velo, just up the hill in Denver. The energy of these three storefronts is intoxicating. Honestly, the only comparison I can draw is how the old FYXO Hub and Shifter Bikes shared a space. A couple of motivated young men, looking to just do shit right. Josh’s work is very much localized to the Denver / Boulder area and he’s just one of the many faces building bicycles in Colorado. I honestly believe what he’s doing is legitimate and his community respects him for that. His work won the Rookie of the Year award at NAHBS, so he’s doing something right!

Check out some photos I shot of Josh working during my stay in Denver in the Gallery. 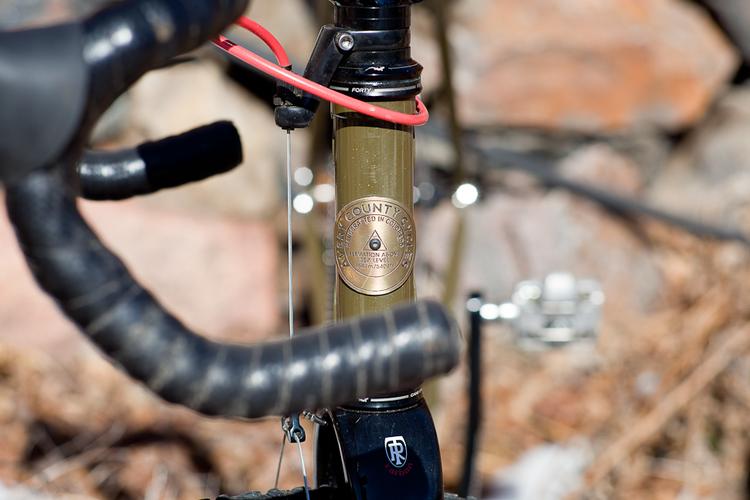 As I await for my film to get processed and scanned, I figured I’d post a little bit of love for these two parties: Pearl Velo and Avery County Cycles. Last year, when Josh from Avery was hanging around Pearl Velo, he and Tyler chatted about making a run of singlespeed cross frames for the Pearl Velo ‘cross team. This one’s Tyler’s personal frame, the first from the batch.

He prefers his cross frames a bit smaller, with a positive rise stem to put him at the proper riding position. Built with Columbus Spirit tubing and a sparkle clear over the olive drab paint, this is a no-nonsense race machine. 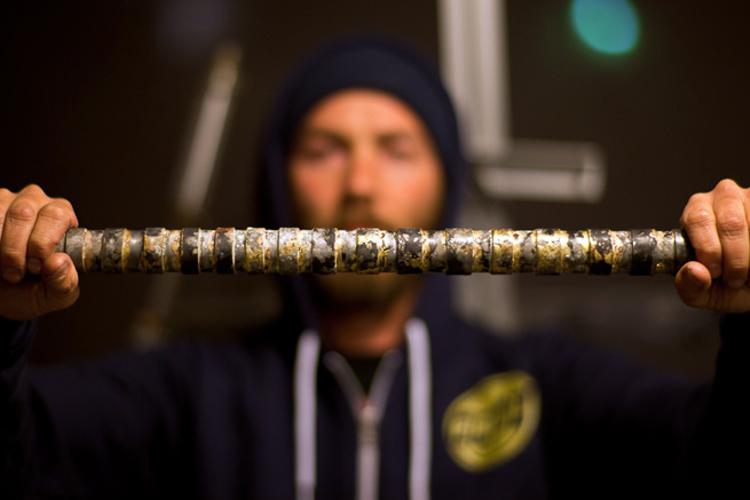 Since the moment I arrived in Denver, Josh from Avery County Cycles has been an exceptional host. He picked me up from the airport, took me to a whiskey sipping night, then dinner and let me crash at his place. I’ve spent a lot of time around his shop and today, I took some film photos of him working. As we were having a beer tonight, he pulled out his cheater bar. Every shop has one, but few have a story like this.

Josh is a self-taught frame builder. Which, these days you rarely hear about. With dozens of frame building schools sprouting up all over the US, you don’t need to spend countless hours by yourself, figuring the ins and outs of brazing but he did anyway. This piece of tubing is where Josh learned how to use a torch.

Of course, there’s no easy way to venture into building bicycle frames. Just a lot of practice and patience. Over the past year, Avery County Cycles has built numerous frames for friends and even a single speed cross team with Pearl Velo. On Sunday, his hard work paid off, when he won Rookie of the Year at NAHBS (he even sold his car to pay for the show’s fees).

There’s more to come here on the site but I just wanted to congratulate Josh on his award!