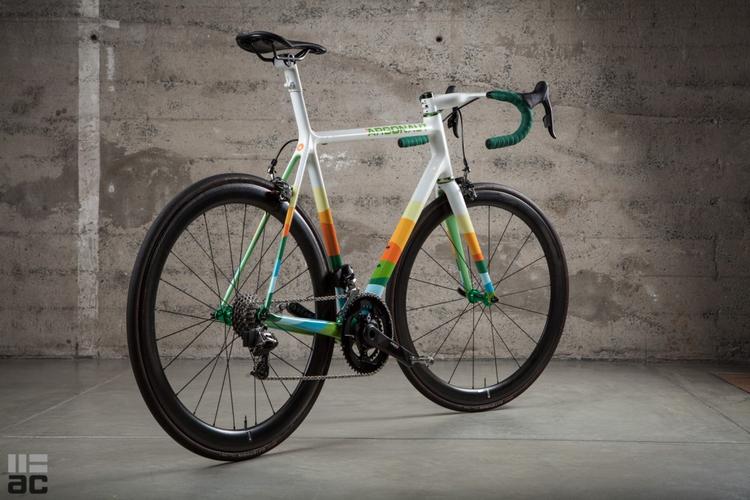 Like the Death Valley sign, this Argonaut Cycles road bike uses nature’s atmospheric layering as inspiration for a bright and sunny paint design, perfect for summer rider. See more at the Above Category blog! 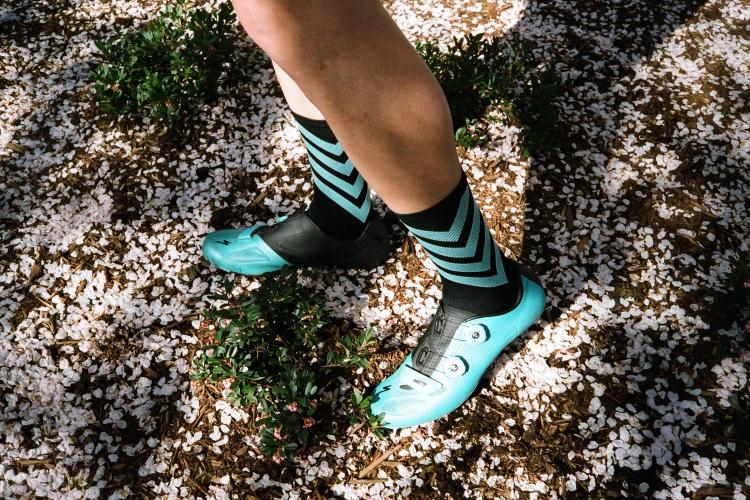 Ben from Argonaut Cycles has been wearing this kit since the 2015 Rouge Roubaix and it made a splash on social media. Now, the same kit is available as a collab with Portland’s the Athletic. Even if you don’t have the dough for the kit, you can order a pair of socks! See the full collection at the Athletic! 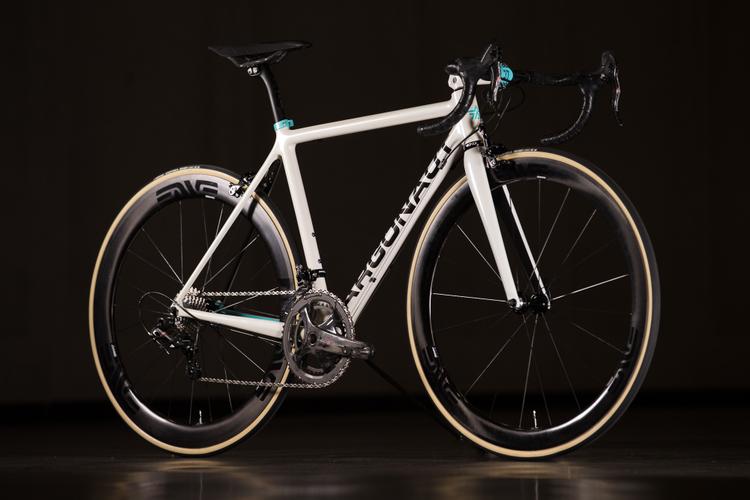 Argonaut has had so many extensive features on this website, so I’ll spare you the introductions. What I will say though is that shooting a white bike with this setup is a godsend. That and the Argonaut-branded t47 BB standard… I still get goosebumps when I shoot these bikes and with good reason. Wow. 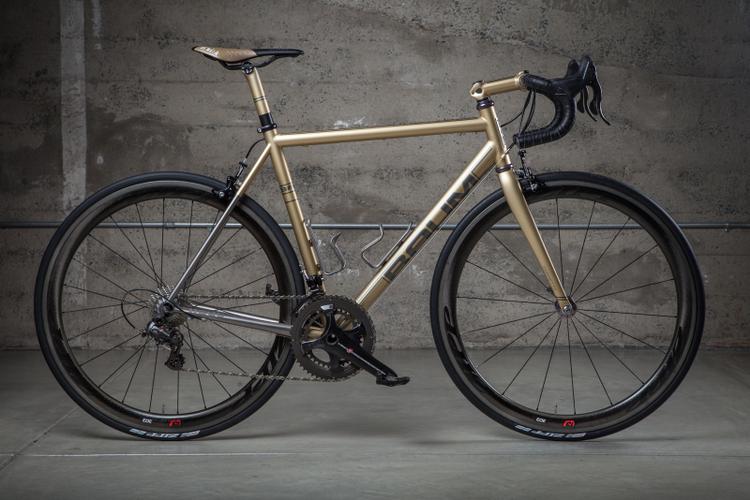 There are a lot of balleur bikes on this site, but Above Category takes it to another level. Right now, they have a series entitled “The Twelve Days of Breathtaking Builds” on their website and as you’d guess, there are tons of details to keep your interest piqued during this holiday season. Head on over and check out the first few bikes to be posted! 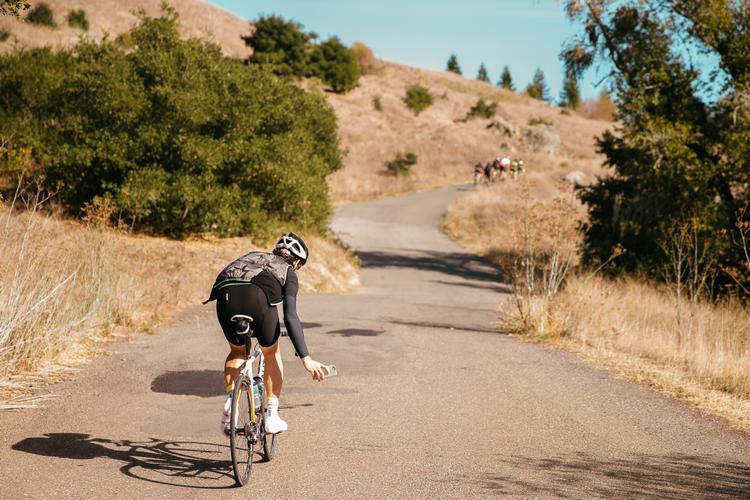 Perhaps some of your questions will be answered in this video… 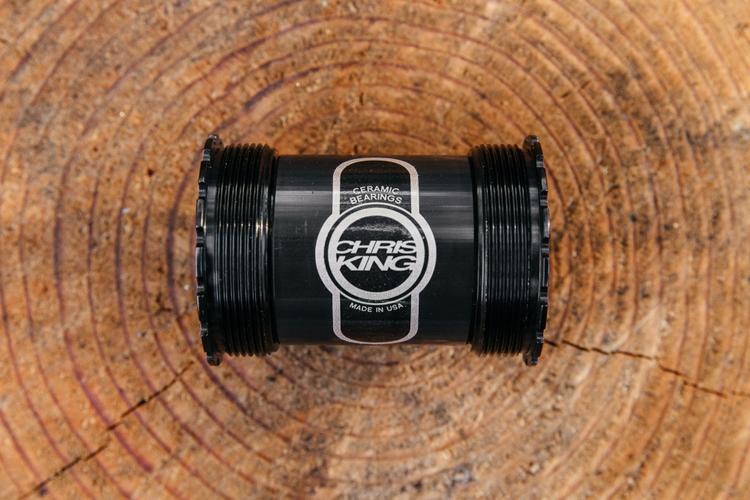 Do we really need another bottom bracket standard? Maybe. It depends on what your experience has been with pressfit 30. Personally, my Argonaut has been fairly maintenance free but any steel frame I’ve ridden with one has been a hassle. Noisy, creaky and kind of a pain to maintain.

Ben from Argonaut Cycles and I had a conversation a year ago about how much BB86 and PF30 makes sense in terms of frame design and performance, yet as the crux for a bike’s drivetrain, it’s riddled with failure. In short: a larger bb cluster allows you to shape a bike’s tubes and not have to worry about the cluster where they all intersect. That’s why it’s kinda hard to use a threaded, English BB in a frame with OS diameters.

Enter the T47 BB standard. It uses a standard PF30 shell, that’s just threaded with 47x1mm pitch to take these new nifty Chris King BBs – either 30mm or 24mm axle compatible. You thread them in like an English BB and walk away. The frame builder can work with OS tubing diameters and achieve the same “stiffness” without dealing with the hassle of a PF30/BB30 bearing.

I’ll step aside with the tech jargon and leave Argonaut Cycles and Chris King to explain the rest below. 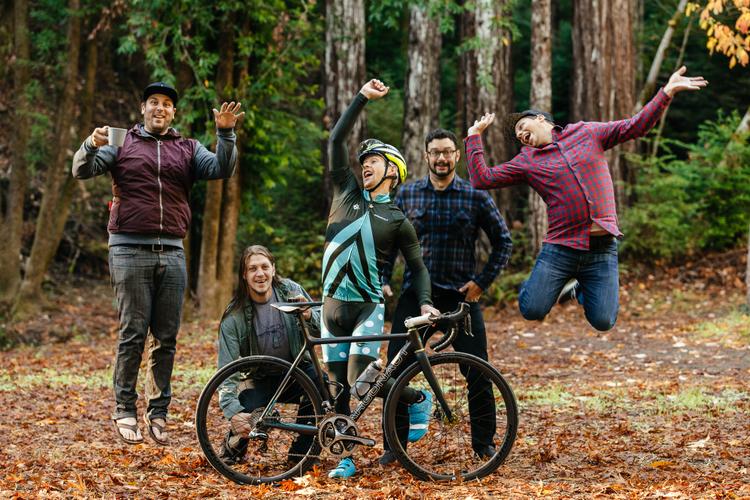 Fall is here in California (it happened overnight apparently) and I’ve found myself in Sonoma County with Argonaut Cycles alongside Chris King Precision Components. There’s something new coming along and I’ll just leave that pretty big, glaring clue for you all until the official launch tomorrow morning.

I gotta say, the road riding here is incredible. I’ll share more with you tomorrow! 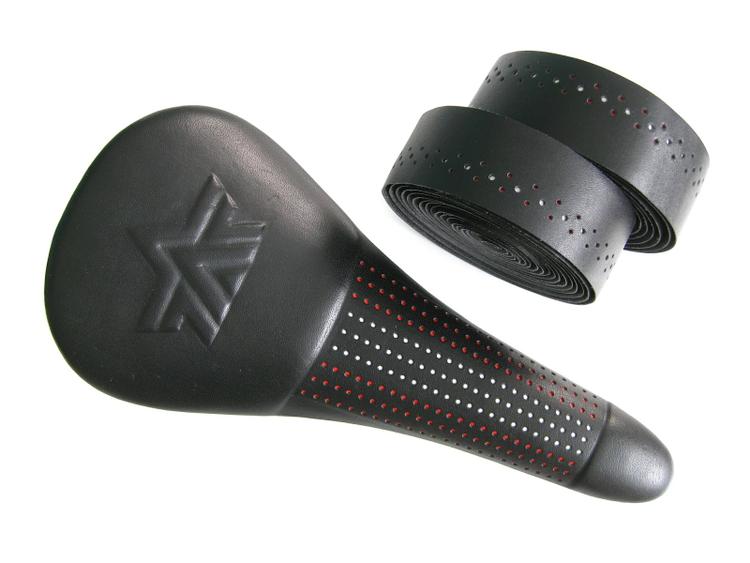 The guys at Above Category have kidnapped the Manual for Speed Argonaut, aka Space Panda. They’re holding it in captivity for a while, so all of their customers can see it in person. If you live in the Bay Area and wanna see just how ridiculous this thing is, swing by or if you just want to see more photos of this beast, head over to the Above Category blog.

For the Columbia River Gorge bike, Argonaut Cycles delivered an amazing split tone green and tan disc road bike. Check out more information as to how this bike can be yours (for free) at 7 Bikes 7 Wonders…

I had the pleasure of seeing this bike in person at the Rouge Roubaix, but didn’t get a chance to shoot any photos of it myself. Luckily, it was recently featured as Above Category’s Bike of the Week, so head over and check it out.

Oh man, those two globe-trotting, flash bulb firing, brilliant minds over at Manual for Speed really did it this time:

“Do you dream? Of course you do, who doesn’t? But how often do your dreams come true? They’re just dreams after all. Have you ever thought, “Hey, I am sick and tired of my dreams just being dreams? I want these dreams to be a reality, but how could I possibly do it?” You have to want it, you have to understand it, and then you have to REACH FOR THE DREAM!

And we’re here to help. That’s right; you want to make that magical-rainbow-laser-unicorn-tropical-island-melting-clocks-brilliant-light-bouncing-off-of-the-floors-hyper-everything bike of your dreams a reality? We know how! With our proven process you can have that bike of your dreams, so join Manual for Speed and special guest Kanye West as we walk you through the necessary steps to making all your dreams come true.”

Check out the full story at Manual for Speed, pick up some unique MFS custom goods at their web shop and see more of the custom Speedvagen and Argonaut road bikes below. Seriously, I want one of those fly-ass Mike Cherney stem caps!

Part of my job during the Rouge Roubaix was to document the Rouge Roubaix Builder Challenge, or #RRBC2015 as the internet likes to catalog things. Last year, in a late night hot tub session, somewhere in SoCal, Ben from Argonaut, Billy from Echos, Aaron from Mosaic and myself were discussing NAHBS. Part of the frustration Ben was voicing was that he had infinitely more fun riding bikes with people, than sitting in a tradeshow booth for three days.

The idea expanded, phone calls were made and soon, the RRBC was born. Sort of. You see, it couldn’t be just one team, so a few were invited. Out of 5 teams, three committed: Argonaut, Breadwinner and Mosaic. Each team would send out a call for entries and select a team mate from the applicants, build them a bike and race the Rouge Roubaix with them.

For Argonaut, they chose Stephan Kincaid, a power house from Pennsylvania.

Since Ben had never met Stephan, who goes by the nickname Geronimo, the RRBC was just as much about the bike as it was new-found camaraderie. We arrived in Baton Rouge on Thursday and had two days to gather course intel, shoot photos, drink and prepare for the race on Sunday. This gallery represents those days in St. Francisville, Louisiana.

Last year’s Rouge Roubaix coverage was a huge success, so this year, we’re heading back with even bigger plans. A group of American framebuilders have assembled teams to compete in the event and to make things interesting, each company chose one lucky individual to be on their team via an application process.

These wild cards each have a custom bike waiting for them in Baton Rouge where they will compete alongside their new teammates. The teams are: Team Argonaut, Team Breadwinner, and Team Mosaic. This has been aptly dubbed the Rouge Roubaix Builder Challenge. Last but not least, we’re all lucky enough to have Chris Diminno from Chris King Gourmet Century on hand to provide nutrition. We’re gonna need it!

The Radavist will be on hand, documenting the bikes, the teams, the main event and some of the vernacular found in this truly unique part of the United States. If you’re going to be at the Rouge Roubaix, say hello and if you’re racing this weekend, best of luck!

When the team at Pedalers Fork became a dealer for Argonaut Cycles, they needed a bike that would operate as both an advertisement and a floor model / test bike for interested clients. While I love my matte-black Argo, stealth is not the best at advertising for the brand, so Gideon at Pedalers Fork cooked up a purple, flashy, chevron-inspired design for painter Eric Dungey to get to work on.

Since this particular model will be a test bike for inquiring customers, Pedalers Fork chose the traditional seatpost spec, rather than an ISP. The result is a flashy, yet classic stance with the brand’s name in bright silver on the downtube. With a painted PRO stem, a blue King, a purple seatpost collar, Mavic 125ans wheels and Dura Ace throughout, every detail has been considered… It’ll be sure to turn heads.

Southern California is a second home to me, for many reasons, the obvious of which being the excellent cycling and the people that live here. Life’s a bit easier when it’s always sunny and excellent riding is at your finger tips. Perhaps that’s why Ben from Argonaut has always liked the crew at Pedalers Fork in Calabasas. They’ve got world class roads and trails literally surrounding their unique restaurant, coffee and bike shop.

I can’t tell you how many times people attempt this business model, yet Pedalers Fork didn’t just attempt it, they nailed it. Excellent food, great coffee and high end bicycles. Pedalers Fork has created an environment that caters to the local cycling scene with group rides, fund raisers and parties. While their bike is small, they turn out many precision high end builds. Up until this point, they’ve sold only Moots. Not because of any exclusivity deal, but because they were looking for a carbon fiber match to the brand. That’s where Argonaut comes in.

A few weeks ago, Ben from Argonaut asked if I wanted to come out to Calabasas, ride bikes, eat great food and hang out with friends. All to celebrate this new union. Well, that and Ben would be giving a presentation of sorts about the brand to a few select people… and I’d shoot some photos.

We spent the morning riding bikes over the Santa Monica Mountains, with lunch at Pedalers Fork, an afternoon Putt n Pump track action at a secret location before attending a dinner, curated by Chris DiMinno of the Chris King Gourmet Century.

Over the weekend, team Mosaic, Breadwinner and Argonaut selected their winners for the 2015 Rouge Roubaix Builder Challenge. Below are the final selections, with a short description as to why they were selected.