Say what you will about hardtail mountain bikes. Die hard park rats think they’re antiquated, beginners often times think they’re hard to ride and the most common complaint I hear is that it’s hard getting bucked all over the place without rear suspension. Granted a lot of those common conceptions can have some truth to them, yet with the advent and availability of new rear spacing, dropper posts that work really well and bigger tire sizes, a hardtail can be pretty damn capable and even a lot of fun. For the past six months, I’ve been riding what I consider a new benchmark in hardtail mountain bike design: a 140mm travel, slack and low, 27.5+ hardtail, complete with a dropper post and a 1x drivetrain. This one in particular was built by hand in Napa by Curtis Inglis of Retrotec. So what does the creator of this beast call it? Well, what else? It’s a Funduro.

Fun what? Come on, it’s a joke. Enduro racing has grown to one of the most popular forms of mountain biking, across the world. Curtis wanted to make a hardtail that is capable for all-mountain riding, with a bit of fun injected into it. He chose a slack n low geomtery with a big, plump 3″ 27.5″ tire, slammed way in there with a 425mm rear end. That formula, combined with a dropper post, gives the rider more confidence to go faster into corners and roll right over the rowdy line. With such a large diameter wheel, you’re getting close to a 29’r wheel diameter, so if you get tired of the 27.5+ platform, you can still rip with your other wheels and you’ll have a 140mm travel 29r. The short rear makes manualing and wheelies second nature and its confident stance makes it easy to tackle both familiar and new trails.

Curtis Inglis builds bikes both under his name and the Retrotec moniker. Most people are familiar with the latter and their swooping lines, hot rod inspired powder coat and gorgeous head badges. They’re always show-stoppers at NAHBS and have long been on my top 10 list. In a world where just about everyone is tig welding the same kit of parts, Retrotec stands out as a truly unique brand. I’d place Curtis’ work in the lineup with Black Cat and Hunter, two other NorCal builders who share a similar love for curvalicious frames. 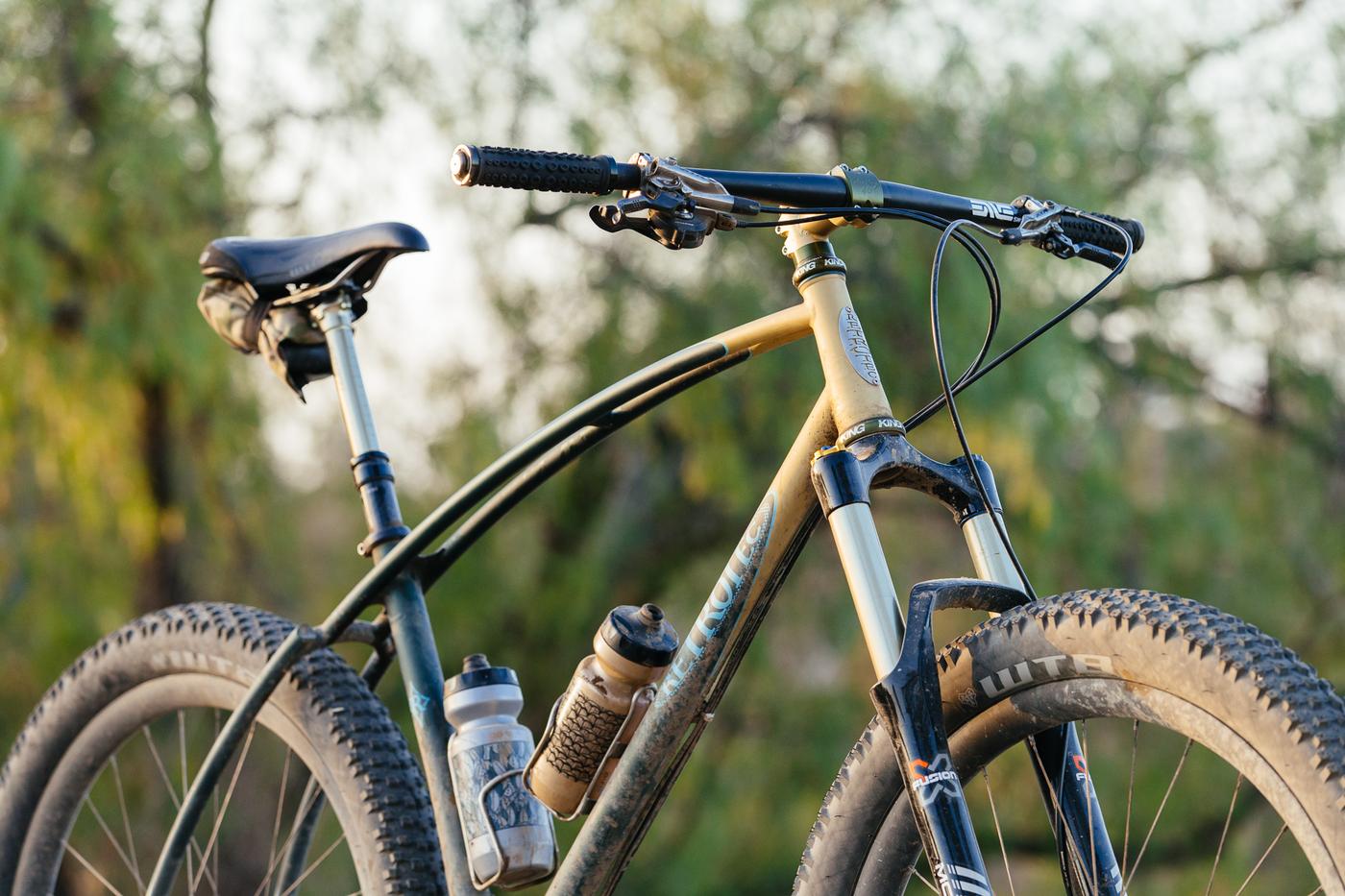 This Bike is a Show Bike

A few months before NAHBS, Curtis emailed me, wondering if I’d be interested in reviewing a bike of his. Turns out, we’re kinda close to the same size, or close enough for a MTB frame anyway. I agreed, especially after hearing his description of the Funduro. Months passed and NAHBS reared its head in my calendar. I had no idea what to expect with this bike. All I knew is it would have the new Chris King 40th components on it, as well as Shimano XTR. The unveiling blew my mind. The colors, the build kit and the geometry of the Funduro had me and the entire attendance at NAHBS in awe. It was perfect, which can be a bad thing with a MTB. I mean, it’s hard to want to thrash the shit out of something so beautiful! Yet, it didn’t stop me. 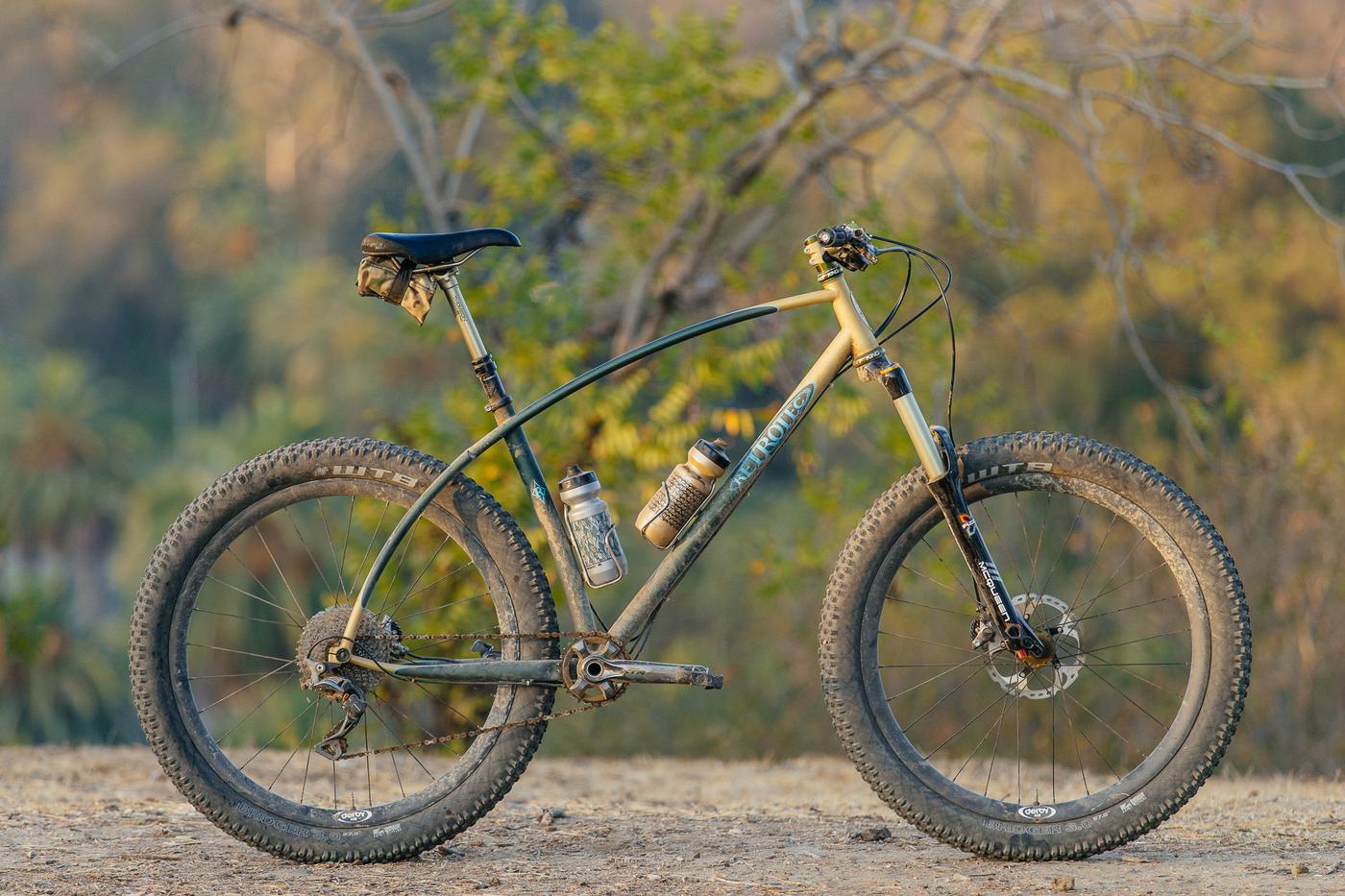 Since it’s a show bike, a lot of companies wanted to get their new technology under my butt for review. At the time, the XFusion McQueen fork was brand spanking new. In fact, it was so new that I was the only one that had a working fork. It’s still technically a prototype and perhaps this review is coming a little bit later than they had anticipated, but in my opinion, you really need to work something over (and over and over) before you can write a comprehensive review. Next up, Shimano’s 1x XTR kit, Cielo’s tig welded stem, the Thomson Elite Dropper, Derby wheels and WTB’s 3″ Bridger tires. Some of these aren’t necessarily new, but they were to me. 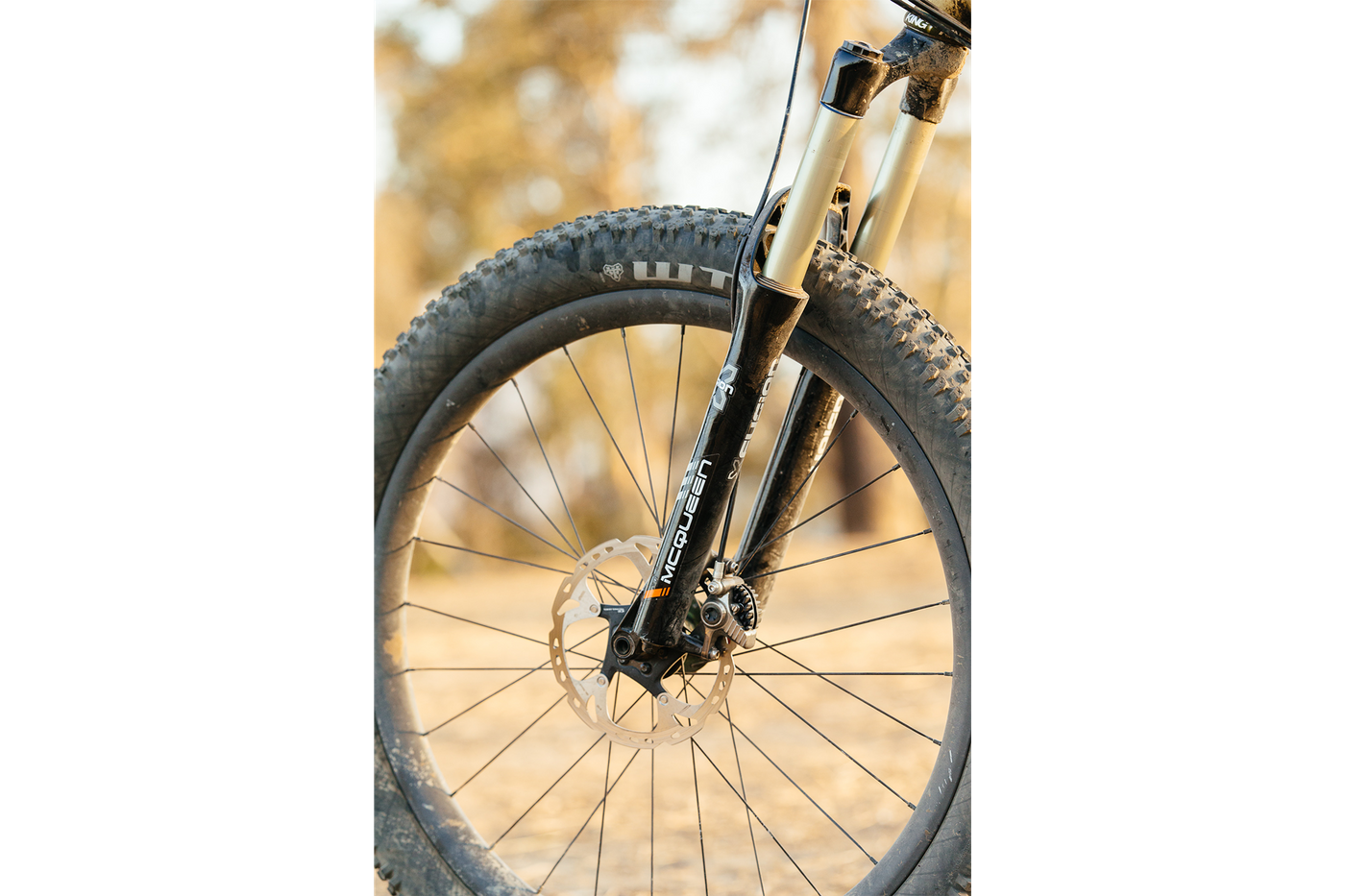 Technically, this is the MCQUEEN RC HLR trail fork. This beast is boosted for plus tires, features 34mm stanchions, even though they look dwarfed by the tires, rebound adjustment, high / low compression HLR damping, and weighs around 4.5 lbs. It’s stiff, reliable and has given me zero issues.

While there’s no lockout, if you turn the adjuster dials all the way in it will be firmer. That’s because the McQueen has High and Low speed compression only, it’s basically a DH fork damper in a trail bike fork. Typically you would only make small adjustments by turning the adjustment knob one or two clicks, depending on the terrain and trail type. This results in a high-performance damper and more of a set it and forget it type of thing.

While the fork isn’t the same in terms of adjustment as say a Pike, it is a couple hundred dollars cheaper. My take away: the McQueen is a fork for someone looking to save money, without sacrificing performance and is plenty stiff, especially for a hard tail! From what I can find, the retail is around $700 or so. 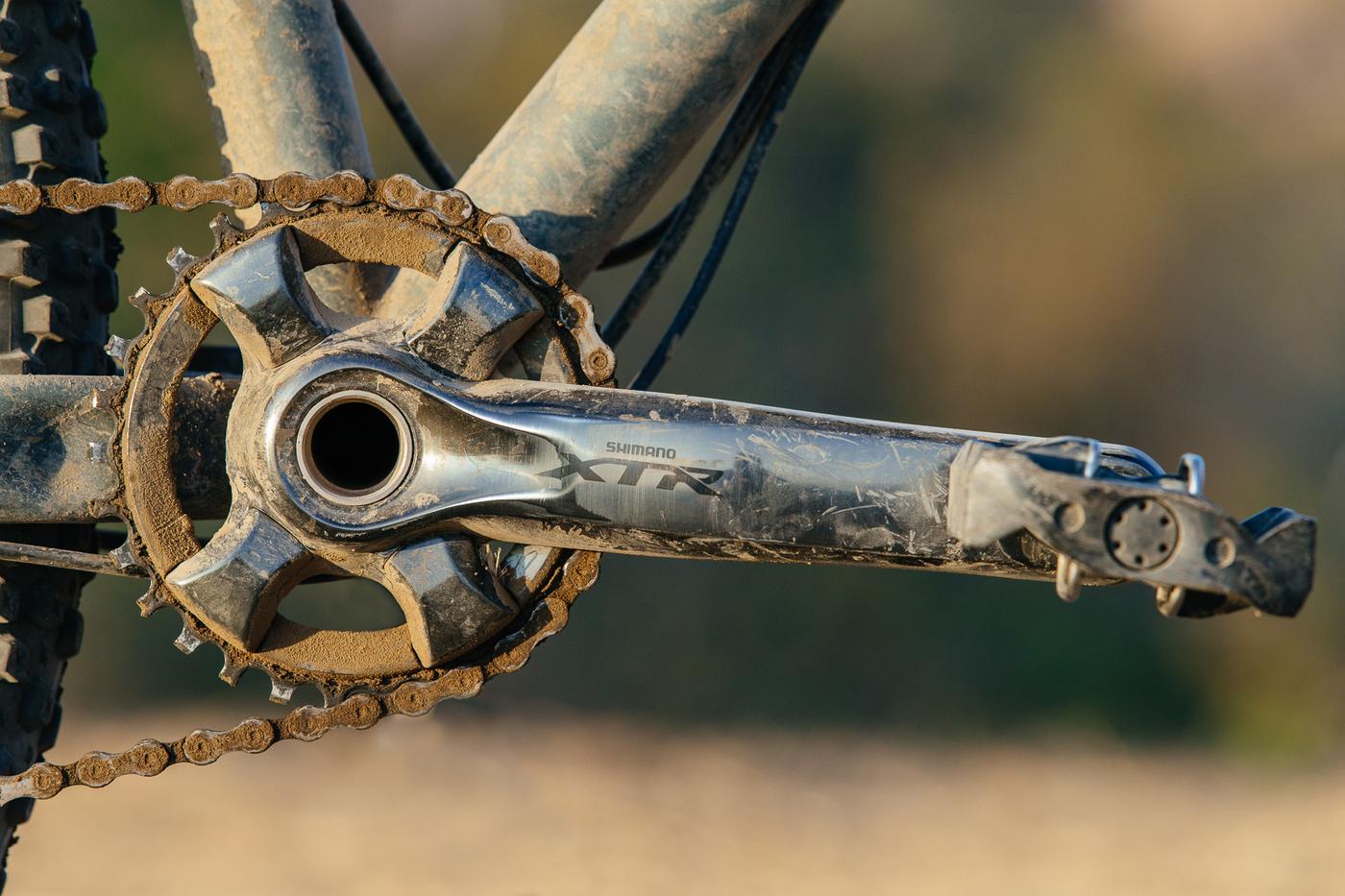 There was a time when XTR was the best of the best and while it still may reign supreme in some circles, the competition has gotten a whole lot better. Honestly, this was the first time I’ve ridden the modern XTR 1x setup, after years of riding SRAM’s 1x mountain range and yes, I did miss that crisp Shimano shifting. XTR is still an amazing riding experience. You can shift under load and not have to worry about any delay or malfunction. It’s smooth, quiet and predictable. Since Shimano has gone 11-speed, their cassettes have gotten wider in terms of range with their 11-40t, but still not as high as SRAM’s standard 10-42t cluster or Eagle’s ridiculous 10-50t 12 speed setup. Now, the difference between two teeth on a rear cassette might not seem to be that much, but as I found with the plus tires, often at lower pressures, I wish I still had them. Sure, some will say I need to be more macho and harden up, but I’m used to riding my trails, with a camera pack, with a 42t cassette. It took some getting used to for sure. If I were to keep this setup, I’d go with one of the many step up add-ons, putting the rear cassette a little bit higher in terms of range. 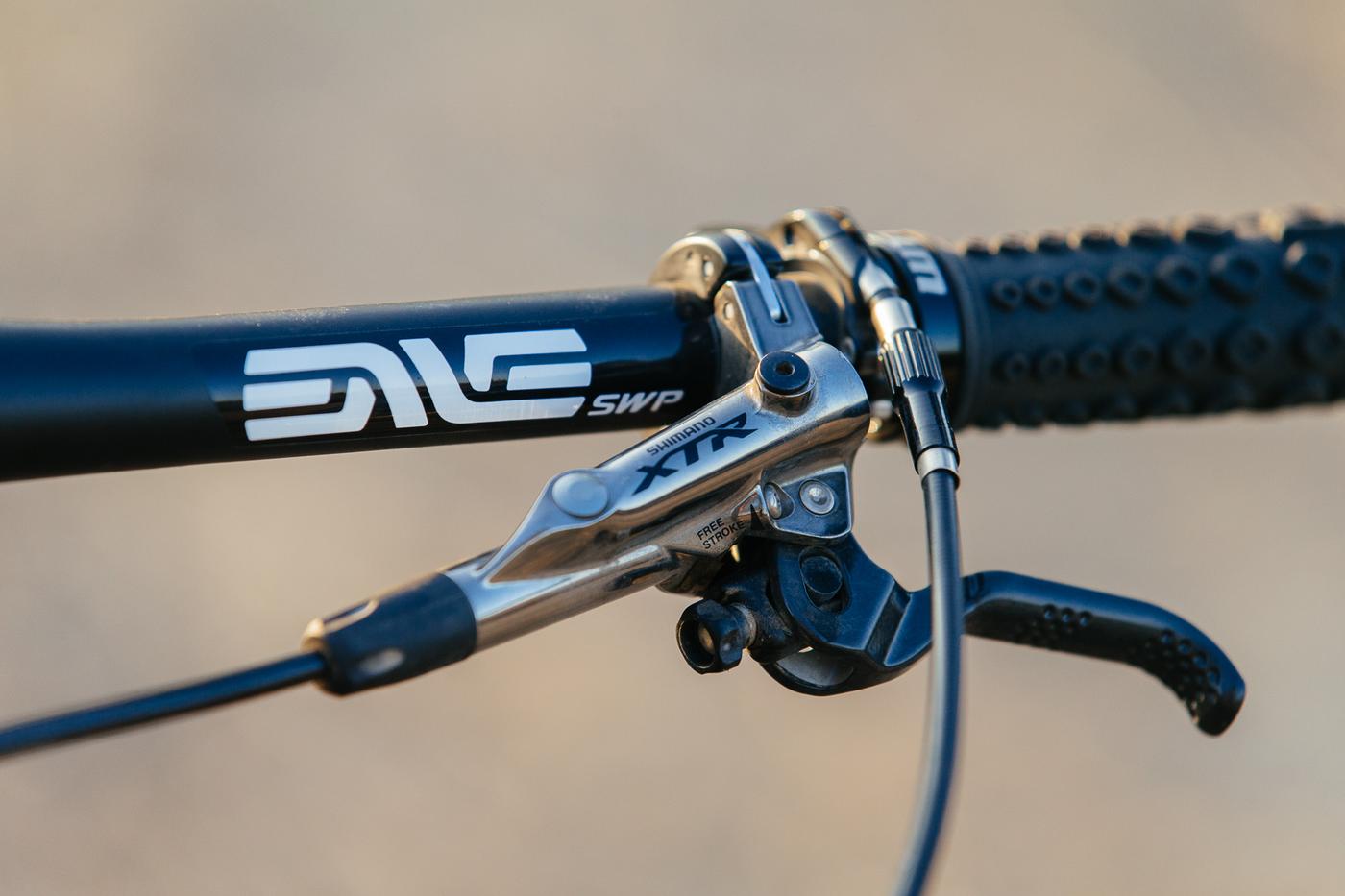 While the drivetrain was a smooth operator, the XTR brakes left something to be desired, especially since my memories of earlier versions were so positive. Now, I don’t know if the SRAM Guide brakes I’ve been riding got better or if the modern XTR brakes got worse, but there is a noticable difference. I had to bleed the rear twice to get it to feel equal to the front and even then, it’s still a bit crunchy. Even my other XTR brakes that are a few years old and have never needed maintenance feel a lot better than these. Fluke? Maybe, but it’s worth noting. 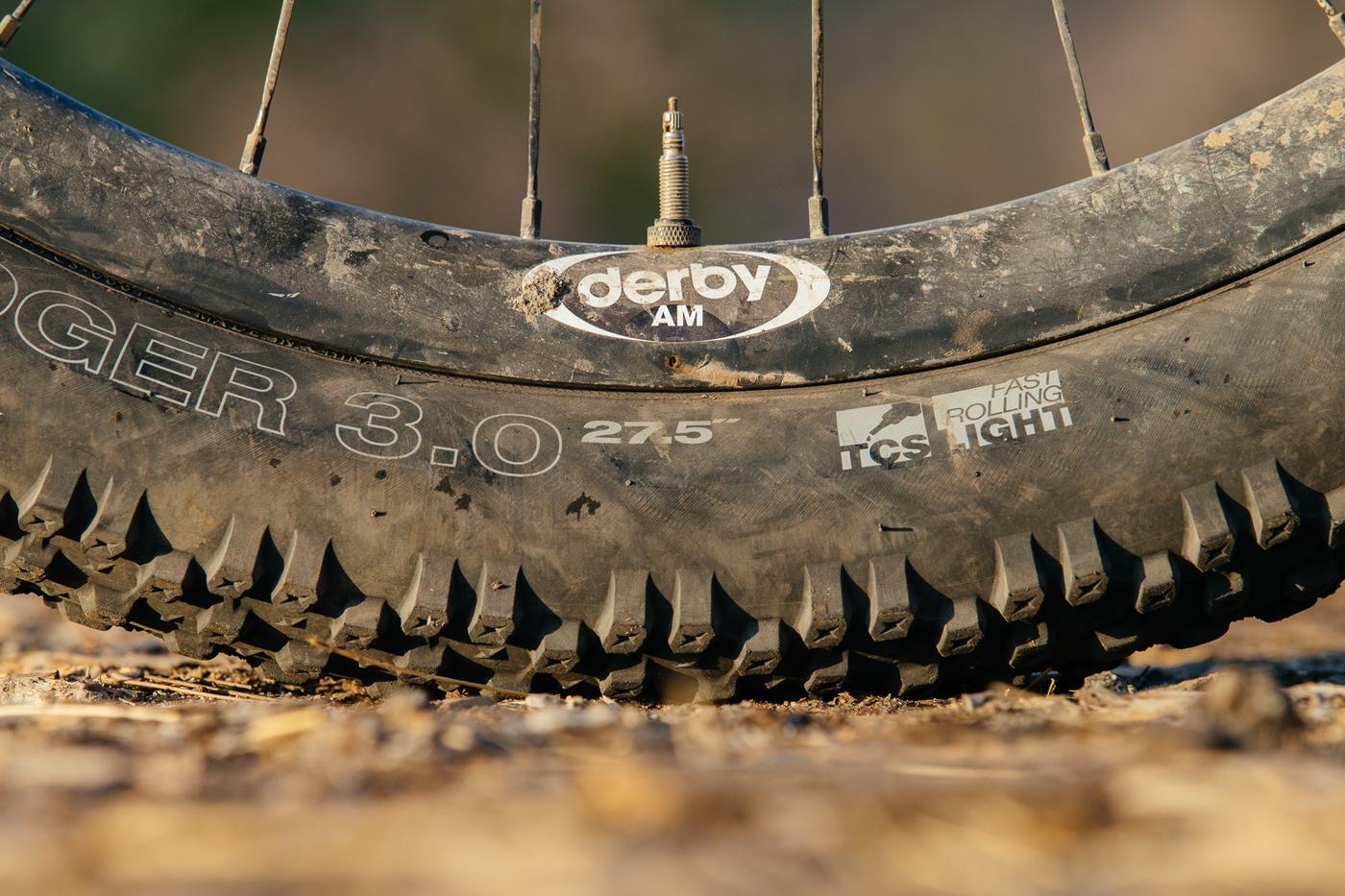 Wide rims make all the difference and as I’ve said before, carbon wheels on a MTB, especially a hardtail, really improve the ride quality of a bike. In this case, the Derby rims, laced to King Boost MTB hubs. These new 148mm spaced, thru-axle hubs are developed for bikes with wider rear ends. This allows you to tuck your plus sized tire closer to the bottom bracket, without the chainline getting all funky. On a bike like this, the short rear is super shreddy. Lower pressure tires love wide rims and the Derby’s 50mm outer width makes for a fat, chunky tire. Even the WTB Bridger actually measures 3″ on these, whereas I’ve found their MTB tires to be a little on the small side on “normal” rim widths. Speaking of the Bridger. Wow! Finally, a real tire in a plus sized offering. If you’ve ridden them, you probably agree and if you haven’t, you should. 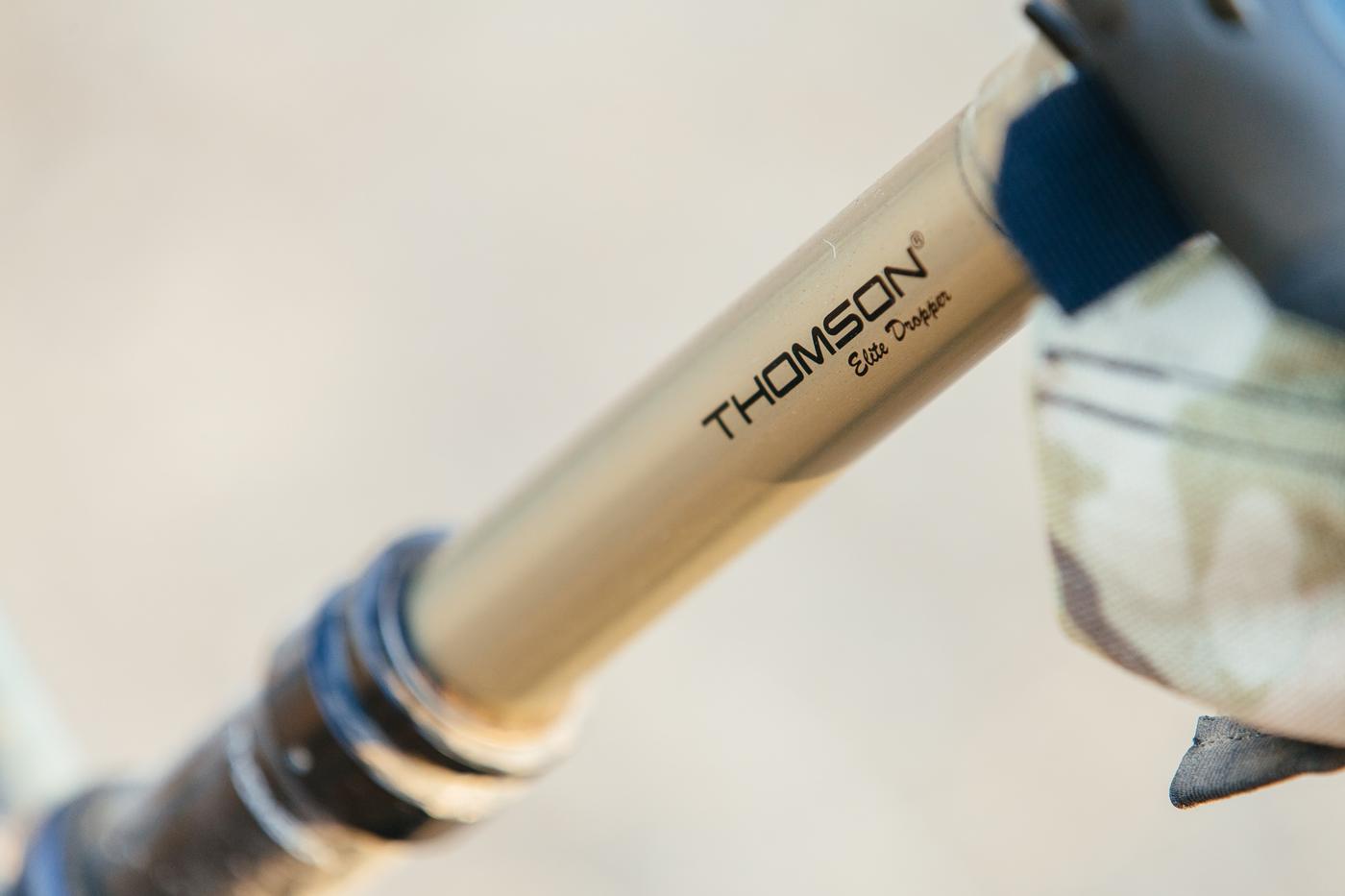 Thomson Droppers are great. They’re cable actuated so you don’t have to worry about contaminates in the line, are durable and I’ve never had an issue with them. This makes the third Thomson dropper I’ve ridden for an extensive period of time and I am sold! 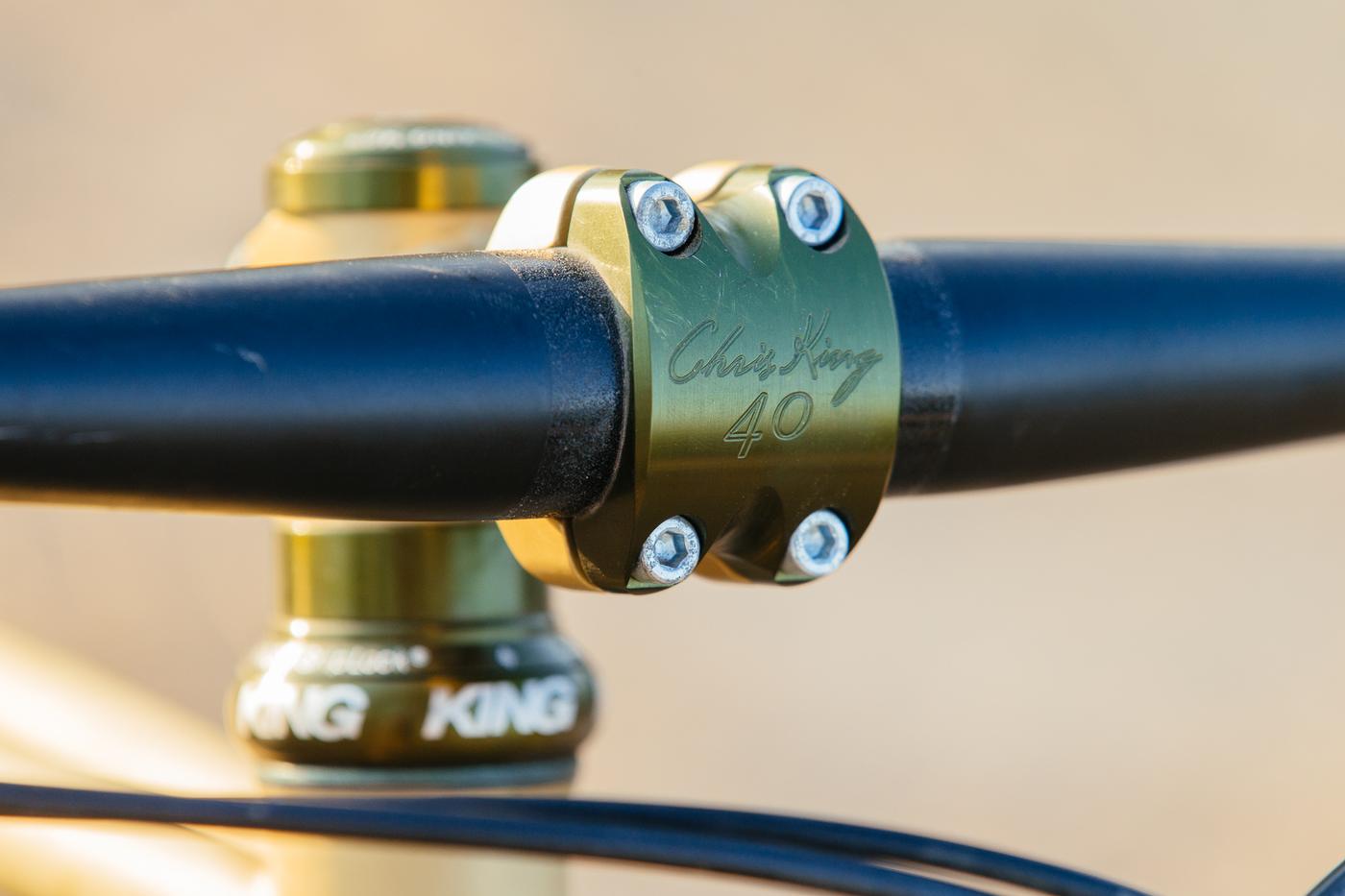 Cielo’s tig-welded stems are made in house by the same capable hands that produce their frames. They’re available in a number of lengths and you can even have your faceplate anodized. This one matches the rest of the 40th anniversary parts. Joined with a killer bar like the ENVE SWP, it makes for a solid, cockpit. 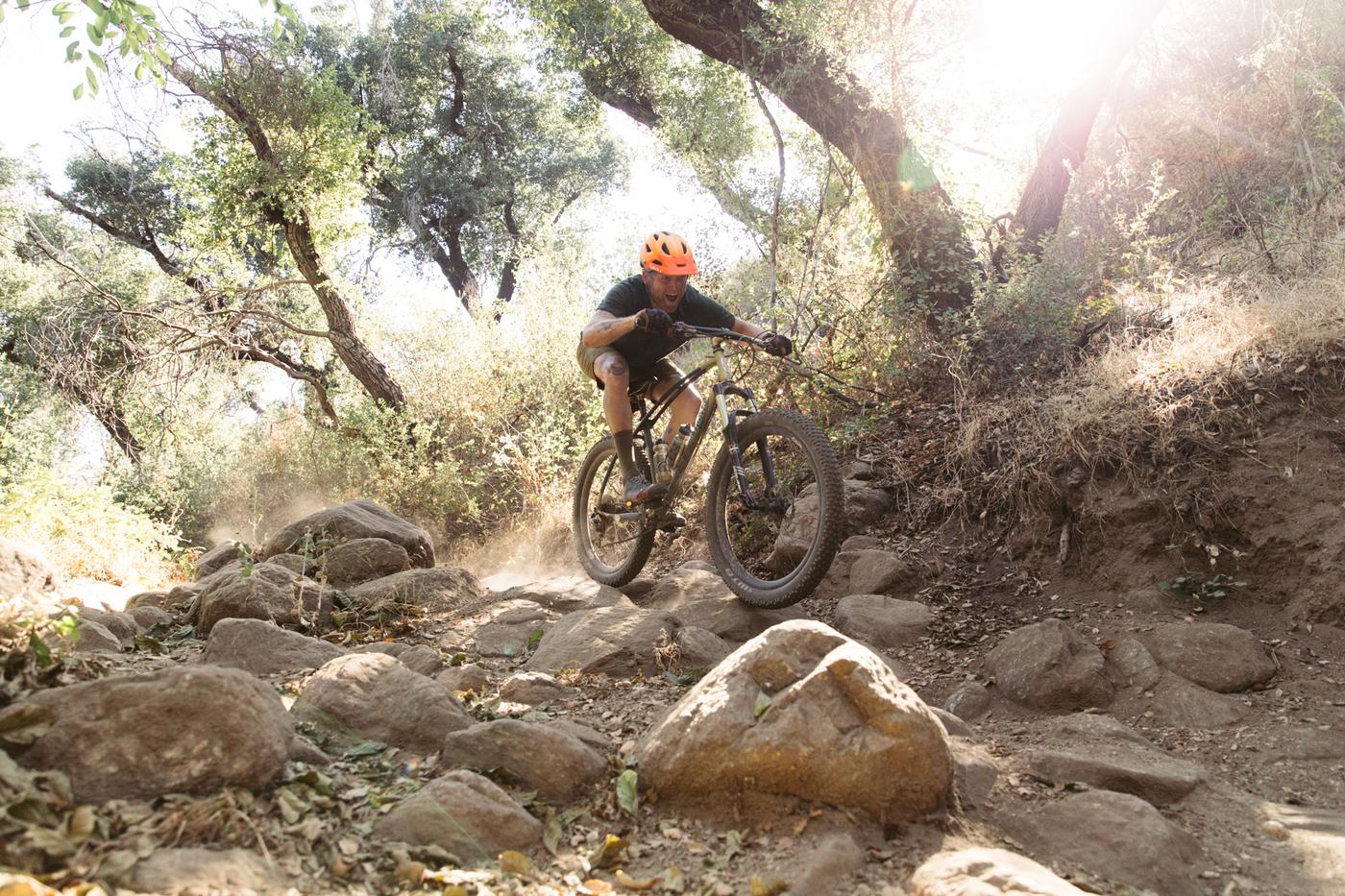 Enough with the Specs!

Trust me, I hate technical jargon. Onto the good stuff! As I said way back there behind all the techy stuff, this bike shreds. It prompted me to sell my full suspension trail bike to be able to buy something like this. For Los Angeles and beyond, I felt like this was all I really needed. If there’s something super crazy on the trail, I’m fine walking it but there’s only been a few moments where that has happened in this review period. Once I got the tire pressure where it felt right under me and the fork dialed, I really vibed with the bike. Since I’m tall, the 140mm head tube and 140mm travel fork put me in the right spot for steep descents and I felt like I was riding in the bike on everything else. The plus-sized tires make rock gardens and drops fun, while root bumps and trail jumps got even bouncier. Literally everything on the trail became something to engage with. The short rear end makes it lively on turns and allows you to slalom down and around corners with ease. Just point it and go! 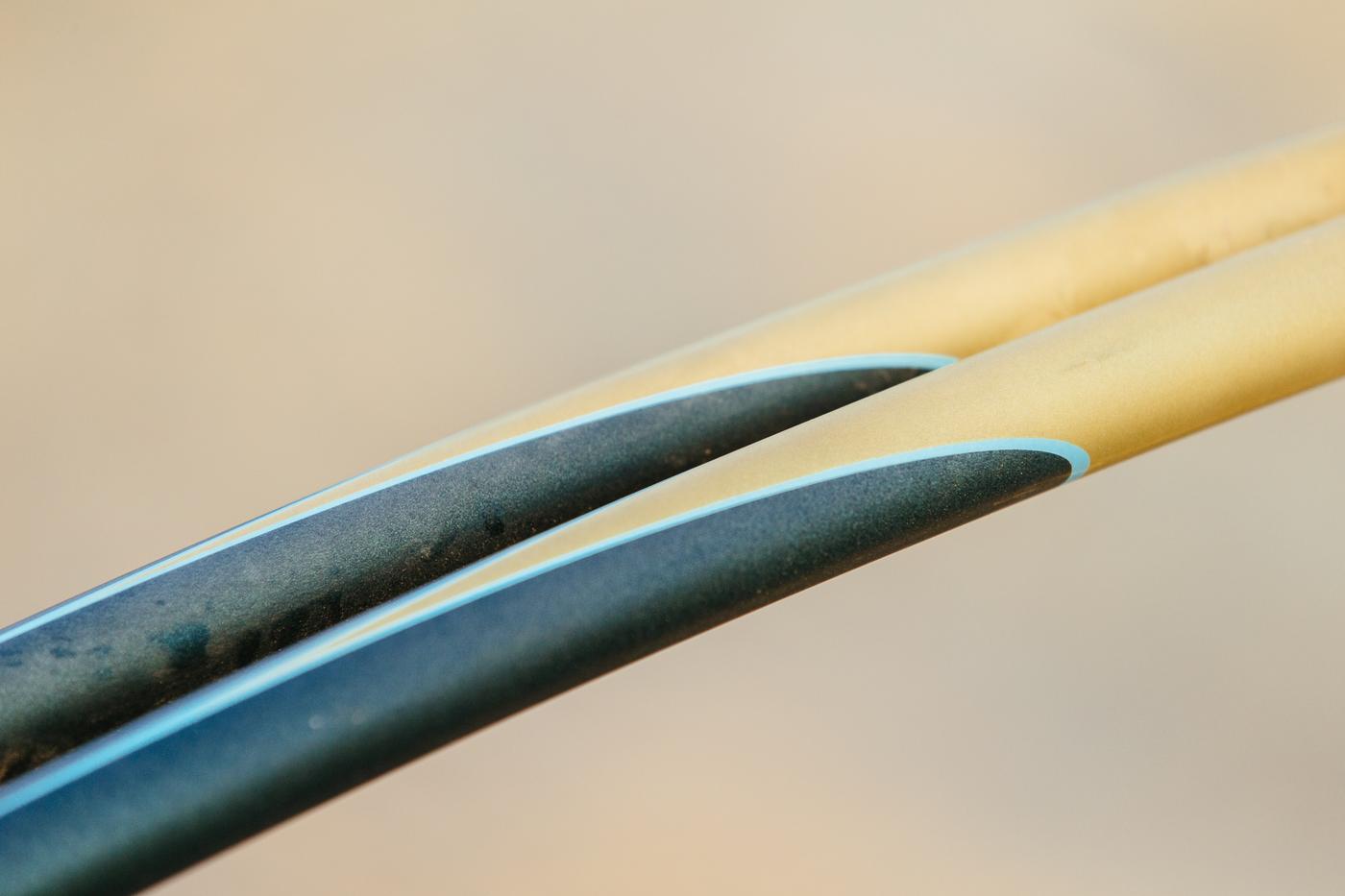 I’ve really only got a few points. First of which is the front rotor spec. I’d like to get a bigger rotor under there for the long descents like we’ve got in Los Angeles. Another is just a by-product of this being such a damn handsome bike: the brake and shifter hit the top tube. Sure, they’ll hit most top tubes, but most aren’t hand-bent bi-tubes that wrap so elegantly around the seat tube like this. Curtis says they’re straight gauge, so they’re pretty unlikely to dent and even with a few spills, I’ve yet to chip the powder coat, but that doesn’t mean I don’t cringe when I see the bike rolling down a hillside. 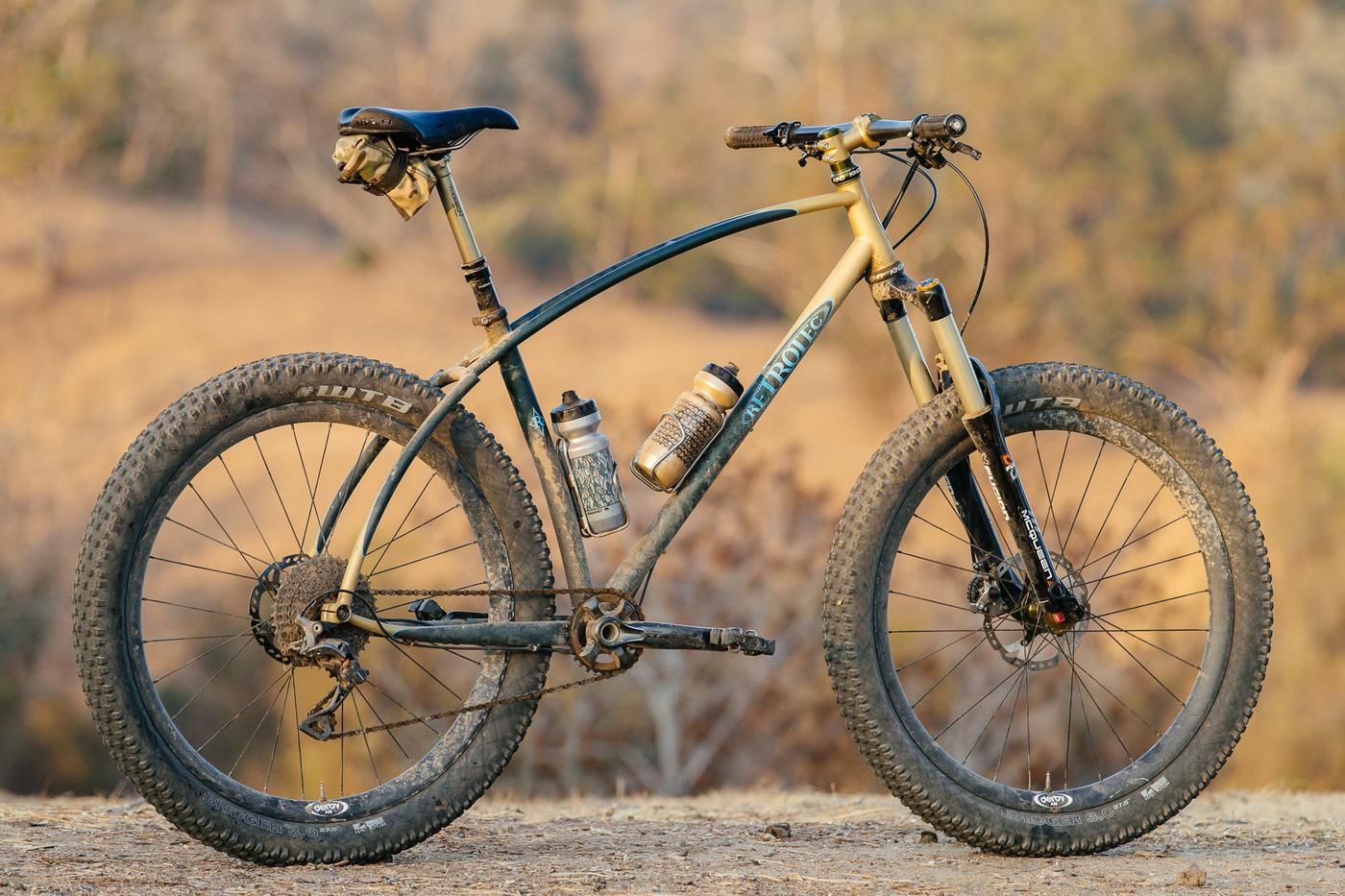 This bike lives up to its name. The Funduro is an all-around capable trail bike with Retrotec styling that shreds as hard as you’ll let it. While it’s easy on the eyes, don’t let it fool ya, this beast means business! If you’d like a Funduro of your own, holler at Curtis!