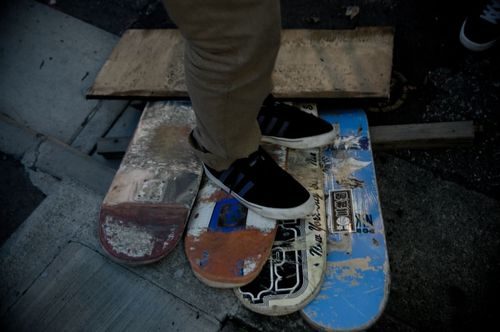 I think of all the people I have met over the years in the worldwide cycling scene, Sexy Sushi is one of my favorites.I used to look at his photos of the JAN crew on Flickr all the time and was always impressed with his photography. At that time, pogos and rollouts were the tricks considered “advanced” in the growing sport and Japan had them on lock. I met Eisuke (pronounced “yous-gay”) back in 2008 at Peel Sessions randomly. He came out, took some photos and then we took him to a bar and got him drunk.

The story continues below… Since then, I’ve seen him on his home turf in Tokyo and last week while I was there, we met up to shoot some photos for Ollie Magazine. Later that night, he came to the Mishka party in Shibuya and hung out for a bit. I managed to snap this photo of him looking normal (he usually makes a face when he sees a camera).

In his blog post from today, he recounts the way we met (awwwwwwww) and posts a few more photos. Go check it out!

Great seeing you man! Can’t wait to see the April issue of Ollie!